For over a decade now, Denver’s Urban Arts Fund (UAF) has paired street artists with walls all over the city and county, paying them to paint murals that live on as some of the most treasured places in the community. Each year a new round of applications is accepted and combed through — mostly by Mary Valdez, the woman who spearheaded the program and continues to run it — and each year more murals are painted than the year before. The applications for this year are now open and there’s only about a month to apply, as the call for entry closes just before midnight on March 16.

Many of the UAF murals are located on the Cherry Creek Bike Path. But as that concrete wall starts to fill up, the program seeks out other locations, especially in neighborhoods that have never hosted a UAF mural before. The one catch with any wall that is transformed by a UAF mural is that the wall must have been vandalized in the past because the program is oriented around graffiti-prevention. Graffiti, in this case, refers to illegal tagging rather than a style of street art — although very few UAF murals share the aesthetic of traditional graffiti.

“What started out as a project to help alleviate graffiti has turned into an incredible collection of more than 300 pieces of art all over the city,” said Valdez in a statement. And it’s a showcase that helps puts Denver on the map as a destination to visit for the art and culture.

The application process for the UAF is fairly simple. Valdez and her team encourage and focus on emerging artists and artists representing marginalized communities. And though there are a great number of Denver-based artists on the roster, there are also artists from all over the world including Brazil, the Netherlands, Puerto Rico, Kuwait, Australia and France.

This year’s applications have a special note about giving preference to first-time applicants, making it an incredible opportunity for emerging street artists or muralists who want to get paid and paint a wall that will be seen by countless passers-by.

“My UAF mural led to projects currently in the works, a ton of amazing feedback, a place to point potential clients to see a larger-scale public piece and a few new friends (no joke!),” said Olive Moya, a 2019 UAF muralist. “I would and have recommended it to other artists. It was a wonderful experience to create something I conceptualized exactly as is, in such a public place.”

If you aren’t a first-time applicant or emerging artist, the best thing to include with your applications and conceptualization is a community or youth-involvement aspect. Markus Puskar organized an event around his mural last year that asked community members to color-in his black-and-white mural with chalk. Lindee Zimmer landed her UAF mural last year by partnering with a school and having some of the students help her paint. 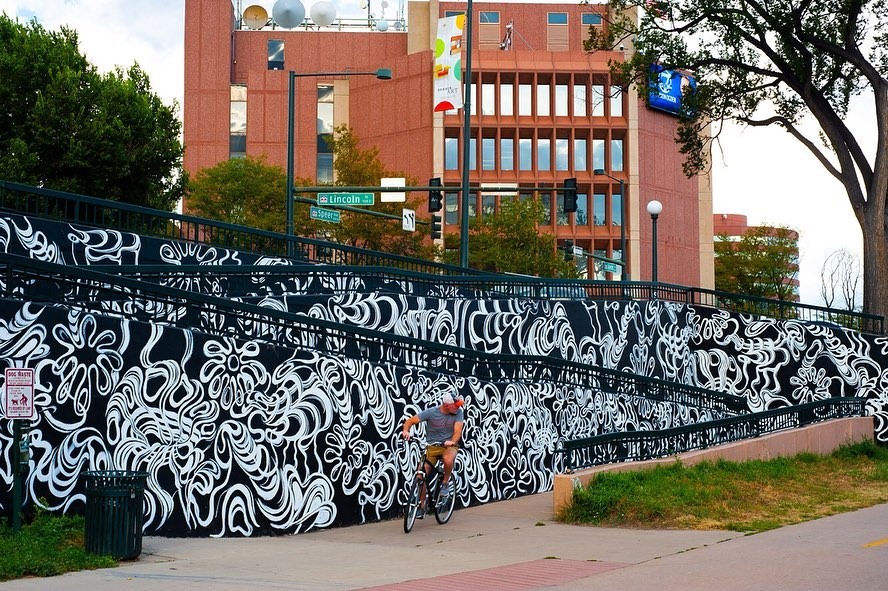 In previous years, the range for payment has rested between $2,000 and $8,000. But this year, that range increased to $3,000 to $10,000. This is encouraging especially for groups of artists and collaborations, as well as walls that are larger than average.

Applications are open between February 17 and March 16, and typically the murals are painted starting in the summer until sometimes the last week of the year, weather permitting.

The UAF program is a unique opportunity in Denver. Take advantage of it, whether it’s by applying as an artist or by enjoying the hundreds of pieces of art scattered across the city because of it.

For more information and to apply, visit the Denver Public Art website here.