Denver-based artist Markus Puskar likes to find interesting ways to paint murals and bring his community together. After moving to Denver in 2017, Puskar’s friend was going to lost his rented house on West Colfax to demolition and gentrification in February 2018. Before that could happen, Puskar painted the entire interior — including the floors and ceilings — with colorful swirling shapes and patterns. They named it “The Funkhouse” and opened it to the public for a month.

As an outsider artist, Puskar felt intimidated about introducing himself to the local art scene in Denver. But, he also wanted to build connections and share his creations. Then, at the end of 2018, another out-of-the-box mural idea crossed Puskar’s mind. The Hornet on Broadway had experienced an unbelievable setback — three cars crashed into the corner of their building on three separate occasions. Puskar was already a regular at The Hornet, and after seeing the carnage from the cars, he offered to paint the plywood that would cover the gashes in the building until the remodel was finished.

READ: Local Artist Paints a Mural Where A Car Crashed into The Hornet on Broadway

At the beginning of this year, Puskar decided to apply to the Urban Arts Fund (UAF) in the hopes of receiving a commission to paint a mural on the Cherry Creek Bike Path. His vision was to paint a section he biked by every day with a hypnotic black-and-white design that “rhymes more than it repeats.” Much like his other mural projects, Puskar’s ambitions pivoted on his desire to immerse people in his art.

Recently, Puskar finished that vision after being awarded a place in the growing list of UAF murals, curated by the Denver Public Art department. His reason for only painting with black-and-white (as opposed to the colorful swirls we’ve seen so far) was so that people could gather to “color in” the mural with chalk. 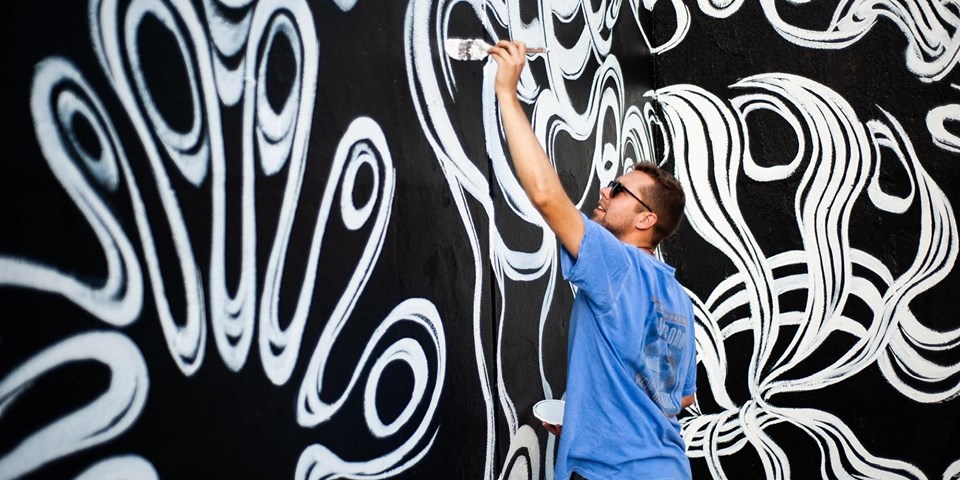 “Even though the paint is dried, the mural is still a work in progress,” Puskar explained. “I am excited to invite the community to come down to Cherry Creek to fill in the painting with chalk and see what we can come up with together. By coloring the mural, we will bring its pattern to life.”

The free event will happen on Saturday, September 7 from 5 to 7 p.m. Of course, the chalk color will only be a temporary addition to Puskar’s UAF mural — located between Lincoln Street and Broadway — and it will be cleaned off on September 11.

If you don’t get enough of coloring in Puskar’s design on Saturday, you can also “pay-what-you-want” for a digital coloring book the artist created, available on his website. And, we can always look forward to more immersive mural art from the artist, who has proven three times now that he isn’t your typical street artist.

For more information about the Urban Arts Fund, read our article here, or go here.

To RSVP to the Mural Coloring Book event, go here.