“You’re going to make it big if you get a singer.”

The members of Lucky Chops — a brass-based band who cut their teeth busking in New York City — received this chops-busting comment for many years. It’s been a while since they’ve heard this remark, however, and it’s not because they’ve added a vocalist to their cohort of saxophones, horns, and drums. Instead, they’ve proved that they can “sing” just fine through their instruments, each becoming the lead singer as they take turns riffing on the melody.

If you attend one of their three upcoming Colorado shows — at Denver’s Bluebird Theater on December 5, at Washingon’s in Fort Collins on December 6 or at the Wheeler Opera House in Aspen on December 7 — you’ll find that their lack of a lead singer is their secret sauce. It’s what made them special in the first place, and it’s what allows their unique, funky flavor to shine through. 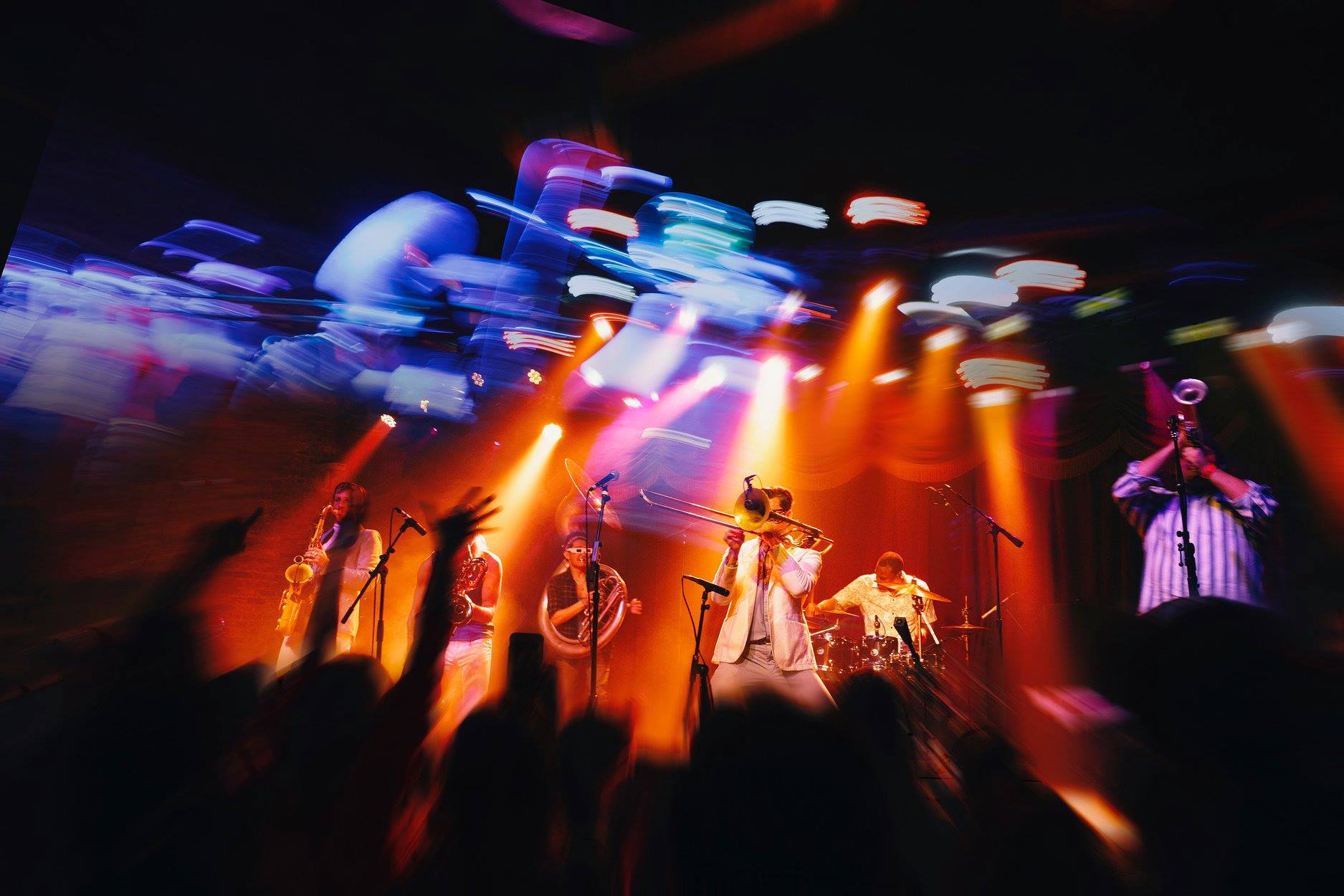 Formed in 2006, the band devoted a handful of years to performing in New York’s pedestrian pathways (both above and below ground) and city parks. In 2014, a video of them playing a mashup of Lipps Inc.’s “Funkytown” and James Brown’s “I Feel Good” went viral, amassing more than 15 million views. (You can watch the transcribed version of that performance here.)

Lucky Chops rode that wave of virality by releasing their first studio project, NYC, which consists mainly of covers. Shortly after, they began touring worldwide — their internet fame fostered a global fanbase — and witnessed firsthand the positive response to their original songs. So, on September 27 of this year, they released their self-titled album. It’s produced by Nic Hard of the three-time Grammy award-winning group, Snarky Puppy, and is the band’s first entirely original project.

Over the past decade, Lucky Chops has blasted through barriers that typically face instrumental bands — they’ve successfully transitioned their live sound to the studio, and they’ve turned fans of the songs they’ve covered into their own followers. Their motivating factor (well, besides their intrinsic desire to play music)? To become the role models in the music industry that they needed when they were kids.

“What we’re doing is something that — when I was younger — I didn’t think was actually possible,” Lucky Chops’ trumpeter, Josh Gawel, said. “When I was a young kid playing the trumpet, all’s I thought was, ‘Okay, I can either be in an orchestra or I could be in a marching band or I could be in a jazz band.’ I actually thought that for a while. Even in college, I thought that was still a thing.” 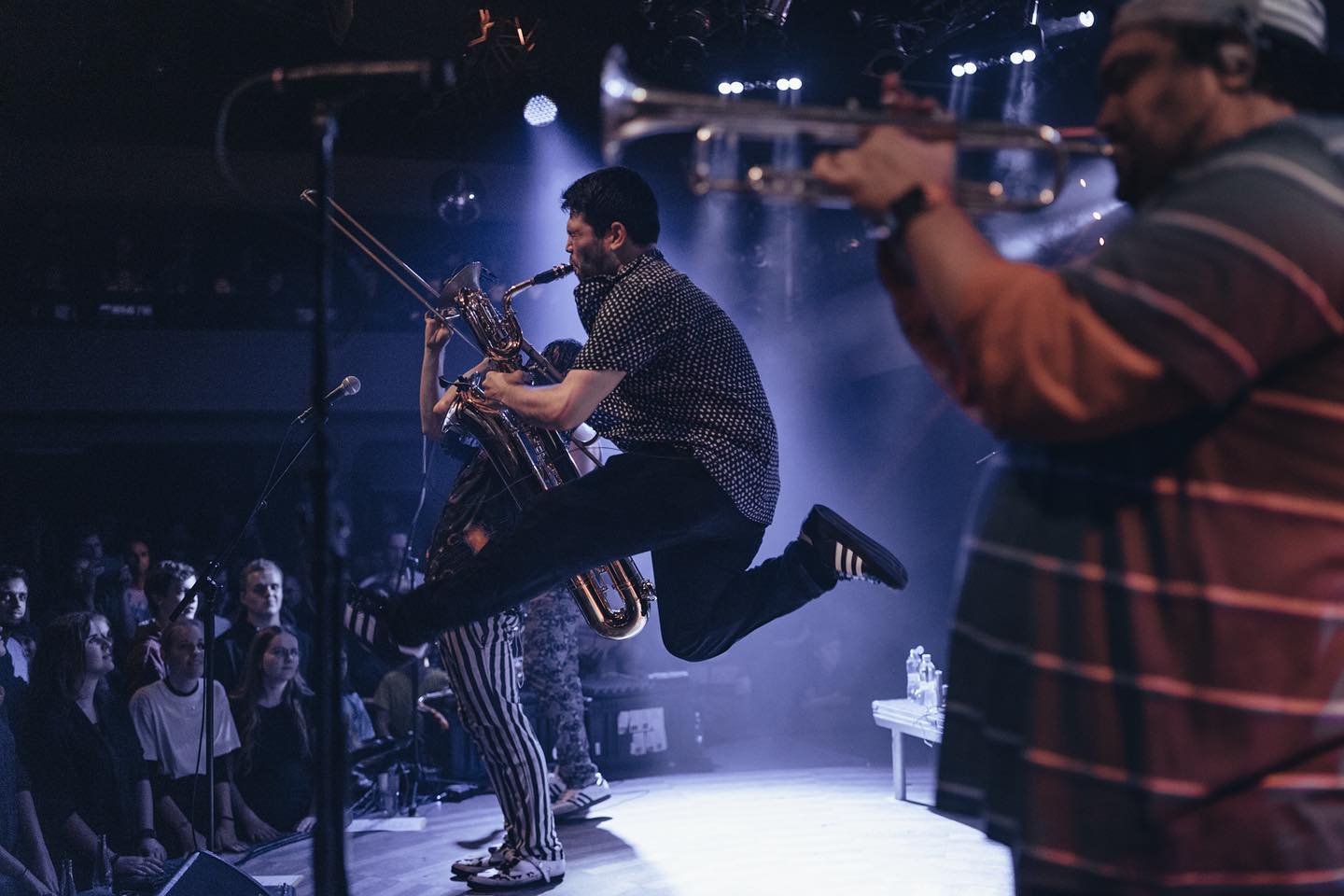 Gawel’s experience is one of the reasons why the band regularly conducts clinics and concerts for students and educators across the world in an effort to inspire the next generation of instrumentalists — especially those who play instruments whose presumed domain is the symphony. They even have a readily available form on their website you can fill out to book them to come to your school.

“Performing in front of kids might inspire them to continue playing their instrument — maybe not even for their career, but at least beyond the classroom. It’s important especially for the marching band kids, you know? Most of the people that I knew growing up who played horns eventually just switched to playing guitar so they could play in local venues. Leading your own band with trumpets and saxophones didn’t really exist then. We’re trying to show people and kids that it’s definitely possible to do that,” Gawel enthused.

You can find tickets for Lucky Chops’ debut Colorado performances on December 5, 6 and 7 here. Local bands Guerrilla Fanfare and Kiltro will open for their shows at the Bluebird Theater and at Washington’s, respectively.