All photography by MJ Kampe

Claude Monet is more than a household name. His work is iconic on its own, but the value of what he painted and how he painted has exacted more influence than many of us can grasp and it’s possible there is yet more to uncover. It is from one of his paintings, Impression: Sunrise that the term Impressionist comes from, and although many of his contemporaries lent a hand in the evolution of that art form, Monet’s oeuvre is particularly well-known and well-loved.

READ: A Behind the Scenes Look at Installing the Claude Monet Exhibit at the Denver Art Museum

Monet’s popularity stems from the loveliness he portrayed in almost any landscape. Even in the foggy streets of London, the artist captured light, color, depth and movement in a beautiful — and unique — way. In the artist’s lifetime, this impressionist approach to landscape painting deviated from the accepted way to practice fine art, by copying old masters’ work, separating Monet and his contemporaries into a class of their own. These artists took to the outdoors (en plein air) to paint what they saw, and the resulting productions have changed the direction of art forever. 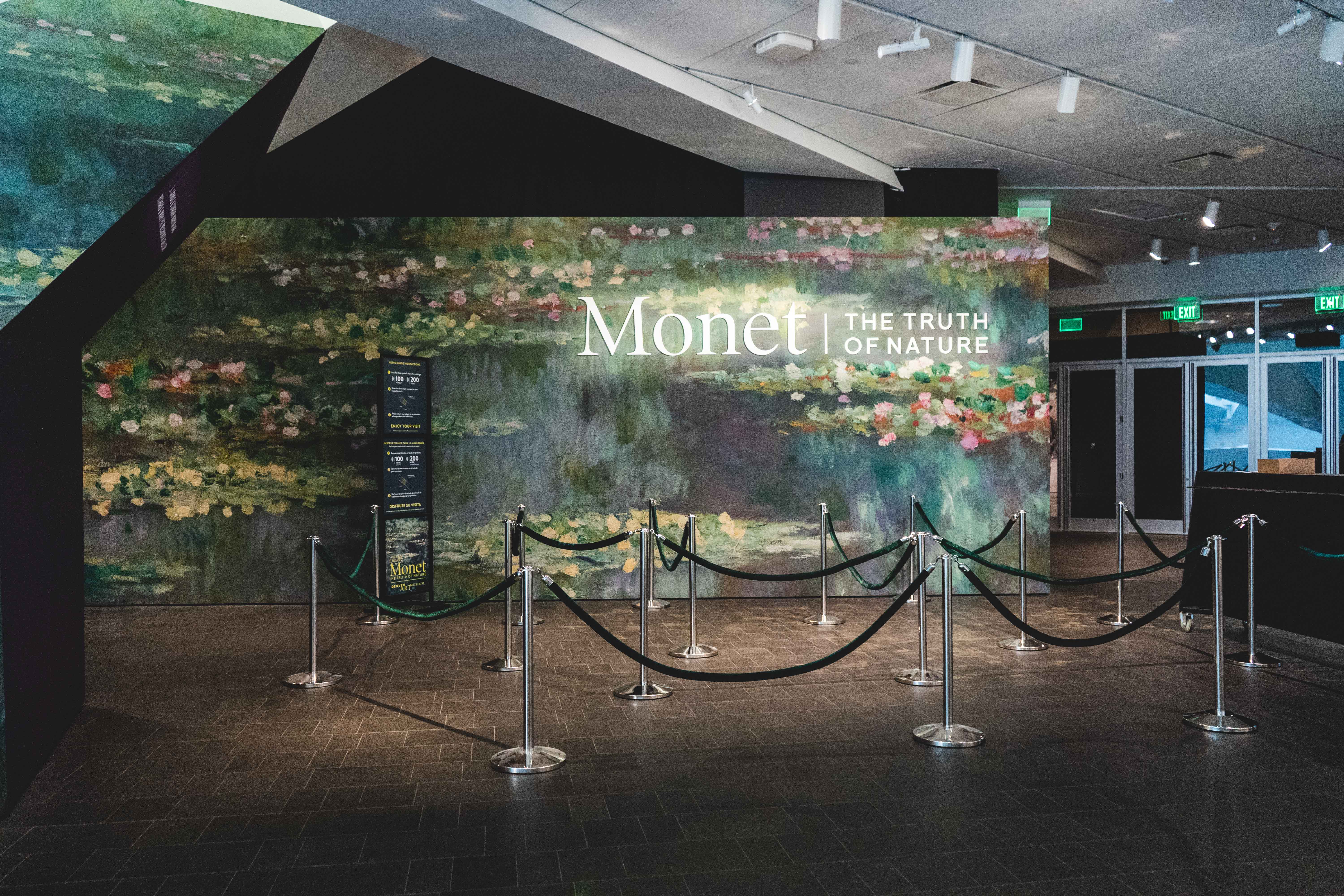 In the soon-to-open exhibit, Claude Monet: The Truth of Nature at the Denver Art Museum (DAM), the revolutionary nature of Monet and other Impressionists is not the focus. Instead, it follows Monet’s life through his travels in search of different landscapes to capture. This brilliant curatorial decision was made in order to express Monet’s striking ability to immortalize a landscape from one moment in time that would never be repeated, and by doing so, act as a chronicler of the environments that inspired him. Co-curated by Angelico Daneo, Christoph Heinrich (both at the DAM) and Ortrud Westheider, director of Museum Barberini in Germany, The Truth of Nature is a massive undertaking that ultimately makes Monet out to be an environmental historian.

Organized by locations Monet lived and painted in, The Truth of Nature showcases work ranging over six decades. It’s not all chronological, although it does meander along with the artist’s life, ending with a room dedicated to his final resting place and beloved garden — and therefore a collection of the Water Lilies paintings. Through this twisting narrative, viewers are able to witness the progression of Monet’s talents while also beginning to understand how he was profoundly inspired by natural splendor and, increasingly throughout his life, with nature devoid of humans.

This show, then, is an environmental history more than a tale of an artistic revolution because we are able to witness the psychological effects of industrialization through the creative mastery of one of the most talented painters in history. Viewers are greeted by enchanting landscapes that use fewer and fewer objects grounded in humanity until the final gallery showcases paintings created in the final years of Monet’s life that portray water lilies in a prelude to Expressionism. His travels from Normandy to Paris to the French countryside to The Netherlands to London to Venice to Norway betray a life that was always led in search of a new landscape that offered magnificent scenes of natural beauty. At the same time, most of those locations during those years — 1860s to early 1900s — were in the grips of the Industrial Revolution. 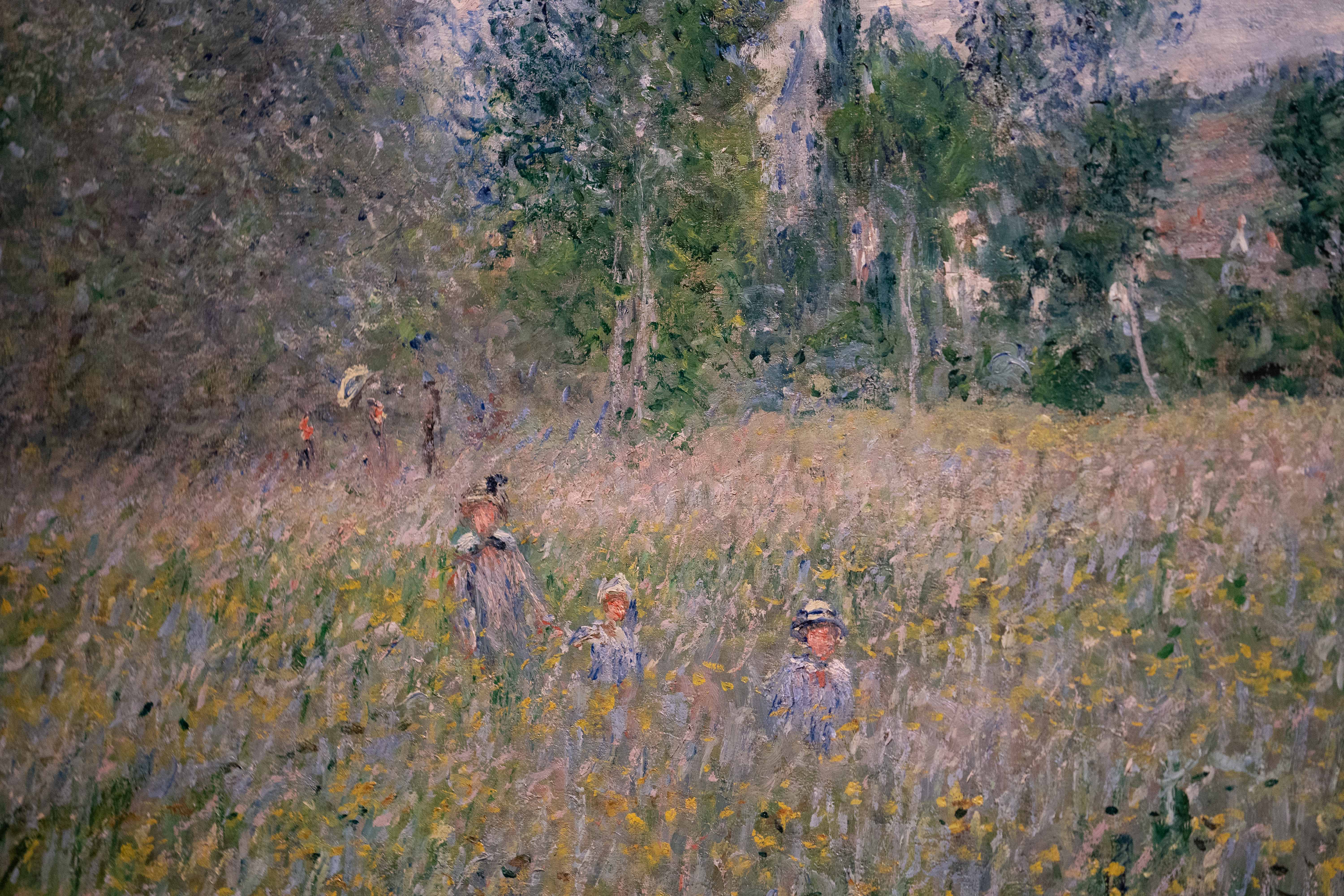 The exhibition does not explicitly state this point of view. It’s something that struck me as I moved between two sections, Argenteuil and Vétheuil. Both were idyllic French towns in the countryside where Monet lived for a number of years. Argenteuil was the first, and the paintings include rural scenes with hints of people — like boats or a footpath next to river Seine. After seven happy years with his family, Monet moved to Vétheuil (a three-hour train ride from Paris) in order to leave behind the growing population of Argenteuil. In these paintings, his focus turns to scenes of nature rather than scenes of people (or their belongings) in nature.  In The Meadow at Vétheuil (1879), for instance, three children in the meadow are covered from the waist down in flowers and grasses, and their outlines are simple brushstrokes. The trees and clouds are far more interesting to look at, and as a viewer, it starts to feel like Monet was closer to the grandeur of nature than he was to any of his fellow humans. Or at the very least, he was hoping to avoid as many humans as possible.

One of his quotes, which appears as the caption on the very last painting The Water-Lily Pond (1918), captures a sentiment that explains some of his motivation for recording these scenes of nature. “Above all I wanted to be truthful and exact. For me a landscape hardly exists at all as a landscape, because its appearance is constantly changing… You have to know how to seize just the right moment in a landscape instantaneously, because that particular moment will never come again, and you’re always wondering if the impression you got was truthful.”

There’s a sadness in that quote, a longing to depict the mortal natural world in an immortal way. Perhaps Monet never even considered the impact of industrialization on natural ecosystems, but his paintings are an ode to planet Earth in an age when humans started making reckless decisions on a massive scale about the environment. His influence on future generations isn’t just water lilies and pretty paintings — instead, it’s found in his reverence and recording of the world around him, a world that was changing faster by the day. In revisiting his heartfelt renditions of these landscapes, can we find a reason today to appreciate nature more than we do? And, in seeing Monet’s romantic version of the world as it was, does it change the way we want to portray our surroundings now?

During Monet’s time in London (for the first time in 1870), he was enchanted by the colors of the fog. The fog, of course, was mostly air pollution caused by the largest city in the world at that time. “The fog in London assumes all sorts of colors; there are black, brown, yellow, green, purple fogs and the interest in painting is to get the objects as seen through all these fogs,” Monet wrote. Even though Monet was certainly not reporting these observations as an act of environmental activism, it paints a picture (literally) of life in London when fogs were thick enough to change the landscape dramatically. And that alone tells an environmental story that is powerful.

Halfway through the exhibition, we are taken to the winter in France and Norway between 1879 and 1895. These paintings are exceptional, and it is in this room that the power of Monet’s perception of the natural world truly comes to life. He was obsessed with finding authenticity in his paintings, even though they were not photorealistic depictions. It was about the essence, the soul of a place. It is with the snowy landscapes that Monet’s delicate but bold use of color to imbue highlights and shadows, times of day and, most importantly, the emotion of a landscape are fully realized. It’s also where someone seriously concerned about climate change might start to see the paintings in a new way. 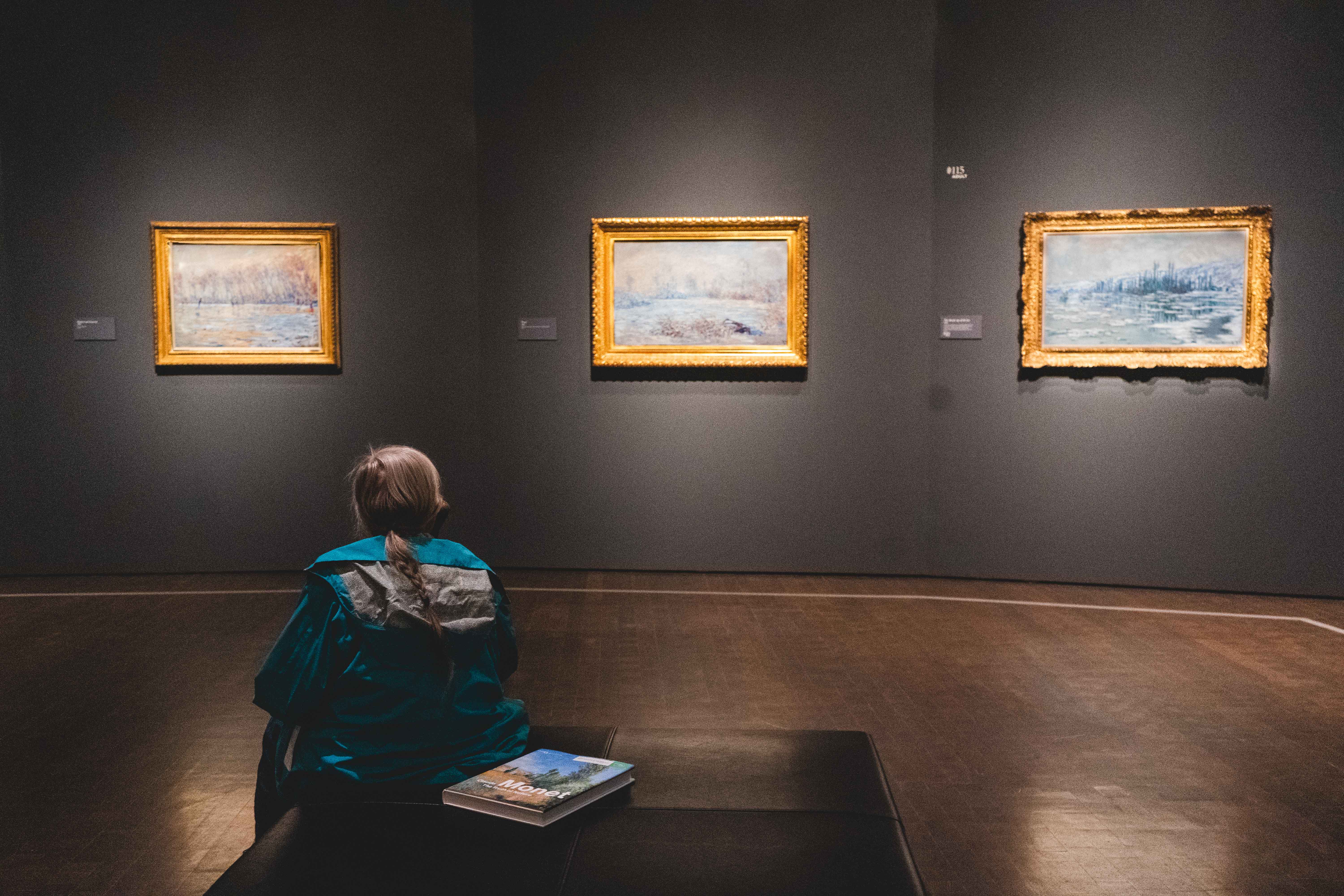 Monet’s truth was in documenting the world as it was, as it will never be again. He knew his truth, even if his motivation stemmed from creativity rather than conservation. Through his own use of color, shape and technique, he was able to portray natural scenes that do what environmental movements in contemporary society hope to do — pull at our heartstrings. Many of his paintings feel like an adoring self-portrait, drawn by the landscape itself.

At the turn of the century, Monet shifted from painting wilderness (meadows, cliffs at sea, the river Seine) to painting gardens in Giverny, and eventually, the gardens of his own cultivating. After diverting a stream nearby to his plot of land, he created a water garden, inspired by Asian examples, and full of imported plants specifically chosen for his en plein air paintings. This symbolizes a turn inward for the artist, and it parallels the rise of early globalization. Perhaps the gardens were his escape, and if that’s the case, then were the paintings in the last 20 years of his life the closest or furthest from the truth he sought? 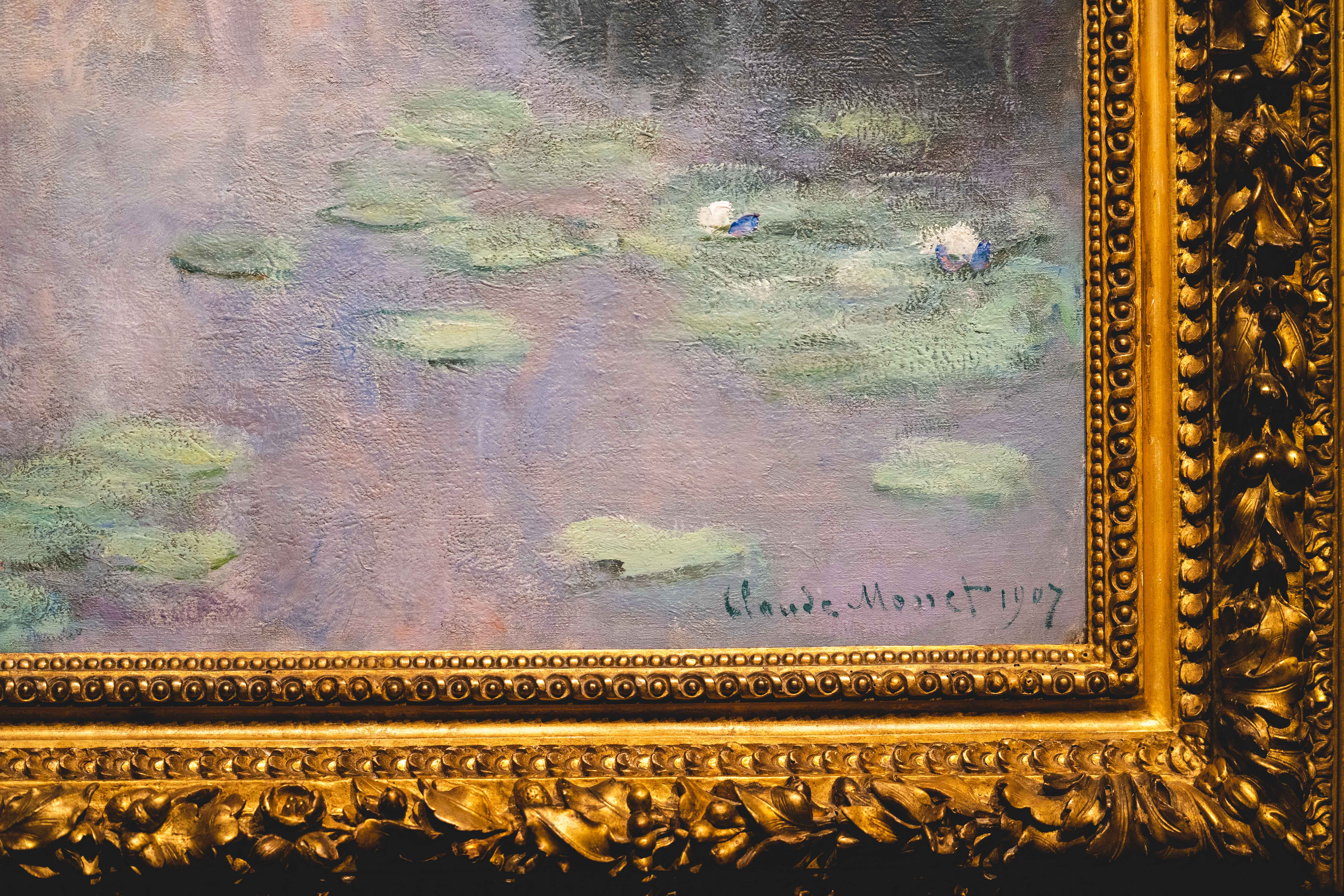 His intoxication with beautiful things from nature, regardless of it was natural or man-made, would continue until his death, where he was surrounded by the gardens and lily pond that he cultivated with love — his little place away from a world that would never be the same again.

Claude Monet: The Truth of Nature is on display at the Denver Art Museum from October 21, 2019 through February 2, 2020. Tickets are sold separately from general admission, available here.

All photography by MJ Kampe.