Behind the Scenes of Camp Christmas, the Massive Christmas Installation Coming to Denver

What happens when a holiday window display artist and immersive theater production company collaborate in a creative, quirky brainstorming session? They start crafting something of epic proportions and it entails a whole lot of glitter and piles of stuff.

Word is slowly spreading that roughly 10,000 square feet of space inside The Hangar at Stanley Marketplace in Aurora will be magically transformed into a massive, merry art installation Americans haven’t seen before. 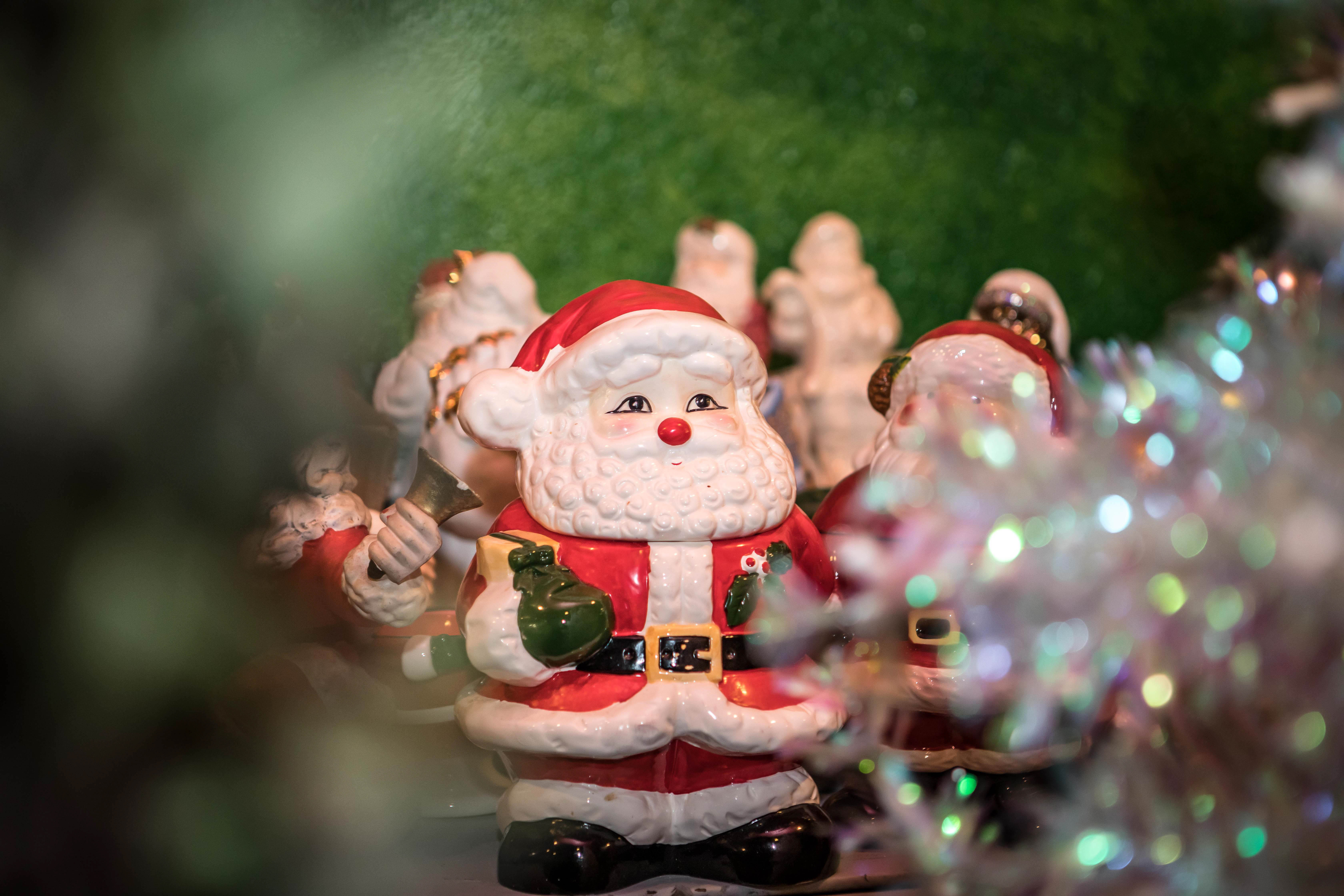 Lucky for us living in Denver, artist Lonnie Hanzon is a little tired of globetrotting to Hong Kong and other large cities for work and decided to bring “Camp Christmas” to Colorado instead of New York or LA.

Camp Christmas — a sort of Meow Wolf meets mall Santa’s wonderland-y attraction — hasn’t been an easy festive feat. With thousands of Santa figurines, lights and other carefully curated objects plus 44 decorated trees, every inch of the installation is ho-ho-hordes of holiday spirit. Hanzon and his crew of 30 talented artists have been working tirelessly on the project since June.

But Hanzon wants campers at Camp Christmas to know it’s more than just a spectacular Christmas showcase. The reference to “camp” plays a huge role in the attraction with two interpretations — summer camp, which is very literally tents and marshmallows around a fire — and “camp,” an over-the-top art style for the purpose of irony that was the recent theme behind the 2019 Met Gala where stars like Katy Perry dressed as a chandelier.

READ: Local Designers Celebrate Camp, but It’s Not What You Think

Hanzon and his friend Charlie Miller, a curator for Off-Center, an immersive theater production group for the Denver Center for the Performing Arts, started eating lunch together to discuss ideas and decided on a project that would merge their two passions and help spur the concepts behind the word “camp.”

“We were sort of interested in what we could do with our powers combined,” Miller said.

According to Hanzon, it was serendipity and got him thinking about creative storytelling through art.

“This is a story that you step into because, in immersive work, you cast the audience. The audience plays a role. We needed something with a structure for storytelling. It actually came from ‘camp’ as in summer camp. But it got selected because camp is so much a part of my style. With the Met Gala happening — it was good timing. People knew the word from the news,” Hanzon said. 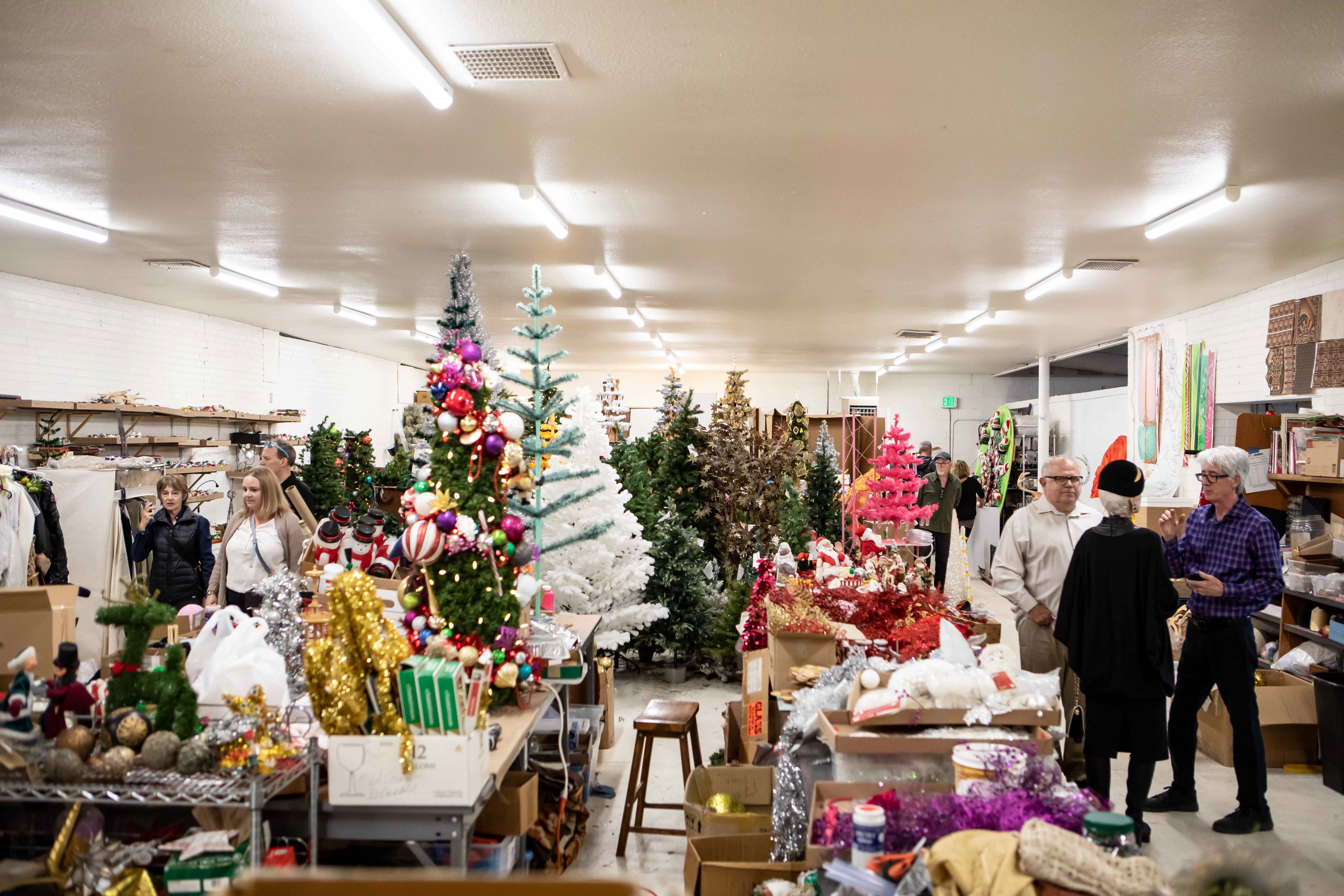 According to Hanzon, you can find both definitions of “camp” in the displays at Camp Christmas.

“If you’re talking camp as in ‘going to camp,’ there’s a campfire where you can sit around and tell ghost stories,” he said.  “If you want to talk ‘camp-y.’ the Baroque display where Marie Antoinette is in a one-horse open sleigh being pulled by 12 elk with a backdrop of mirrors and a wig that goes up eight feet with a Christmas tree coming out of it — that’s one of the campier statements.”

While there will most certainly be a lot of offbeat, “camp-y” Christmas décor that’s great for (the coined term) “Elfie Selfies,” the upcoming installation will also be educational about the history of Christmas for visitors.

Campers will be able to earn “Merry Badges” — similar to the merit badges earned by girl and boy scouts — and get a guidebook stamped when they partake in activities to learn about decorations, lights and other elements of Christmas through time.

“We picked time periods that are chronological and obviously we make some pretty big jumps from Renaissance to Baroque. Once you get to Victorian, then you’re really into the American invention of Christmas — Art Nouveau, Art Deco, Atomic, Mid-Century, Sugar Disco (80’s) and Christmas Present — which is the current day,” Hanzon said.

“If you’re in the Renaissance, you learn about the hearth, campfires and wassail. You can participate in some of this stuff. There are period toasts to do in each era.” 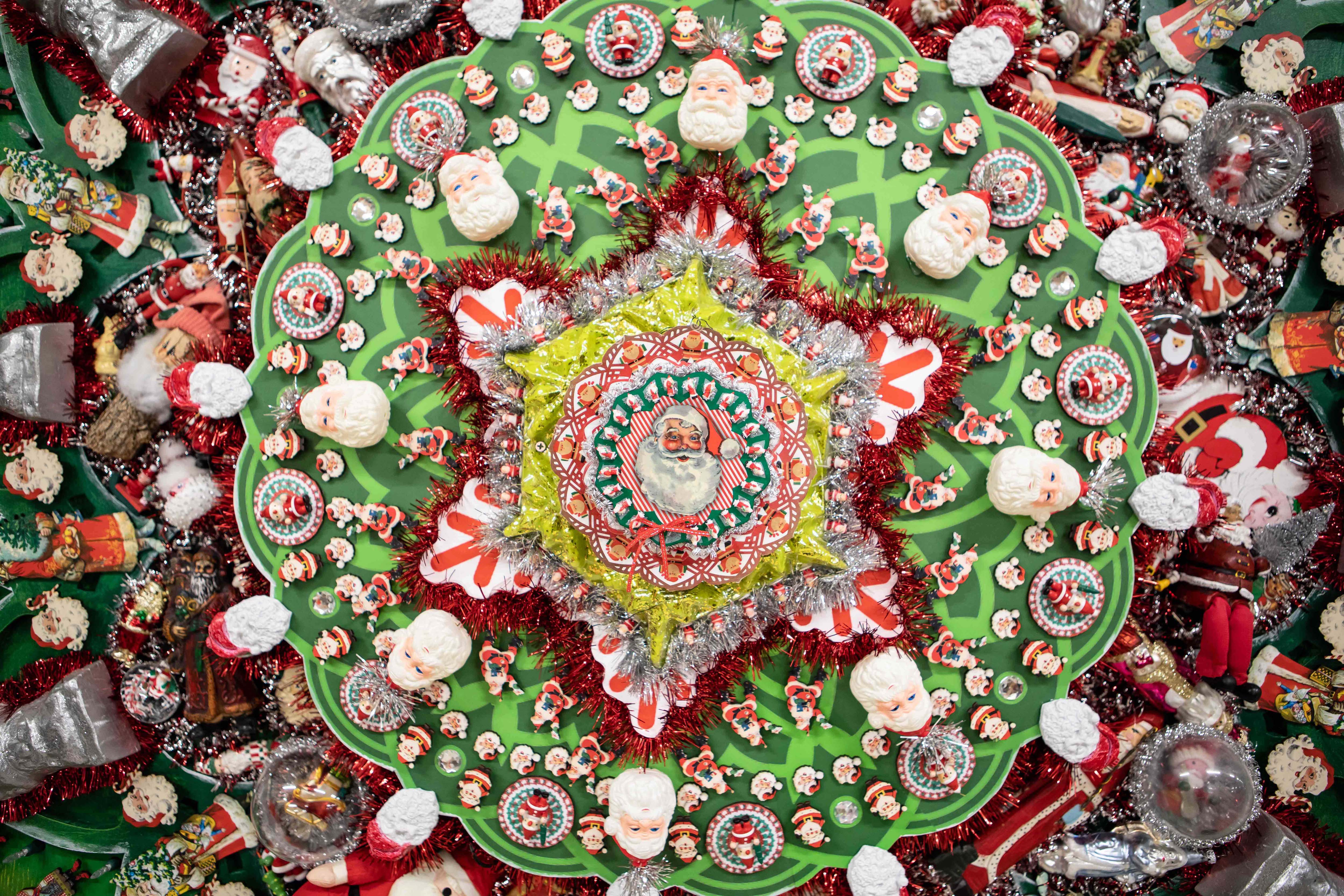 Hanzon and his team personally searched for appropriate objects to curate that showcase the various languages, colors, graphics, textiles and materials that coincide with each time period, but some of the pieces are reused from past displays Hanzon worked on.

“We’re using a very large junkpile and then sourcing from literally all over the world. We’ve brought in different materials from eastern Europe and China. People joke in the studio that everything is getting used,” Hanzon said.

Within Camp Christmas, you can find a tree made entirely out of 130 years worth of lightbulbs starting with the Edison bulb to present day, a 16-foot “Grandma’s Tree” that’s a little more traditional, silly trees inspired by puns and a tree made out of 500 pounds of sugar.

“It’s made out of hot sugar that I’m cooking,” Hanzon said. “This was a project I did 15 years ago for Neiman Marcus in Dallas. They sent me to confectionary school to learn how to cast and blow sugar. You heat it up to 425 degrees and then pour it or blow it — very similar to glasswork.”

When Camp Christmas opens its doors on November 21, Hanzon says he’ll be doing live demonstrations of candy cooking and will start adding pieces to the top of a steel frame that will be a complete candy tree two weeks later.

“Christmas is supposed to be the antidote. It’s not the poison. People get all stressed out about the holidays, so I have a real interest in trying to show them the magic, the brotherhood, the community and the love. That’s what it’s all about.”

The lights are intense too. There will be a winter forest light show that goes off every 20 to 30 minutes that takes over the whole space and a giant chandelier with thousands of bulbs.

As for Stanley’s electric bill, Hanzon and Miller joke they’d rather not discuss that quite yet, but they’re happy to reveal other secret highlights no one will see until opening day.

“Blucifer being speared by a candy cane will get photographed a lot,” Hanzon said. “It’s not violent. He’s like a carousel horse. But he’s reared up and it’s definitely a selfie. He’s a lifesize horse. The artist glittered him and he has red LED lights.”

In addition to Blucifer, campers can also enjoy food and drinks at the Santa Bar or Tiki Bar and get pictures with Santa at his cabin on Saturday mornings.

“The way Lonnie has designed this —  it just keeps one-upping itself. There’s always something new. I’m sure people will have favorites. The fun of it is that there’s no star of the show,” Miller said. “What’s cool about this is if you want to just go and enjoy the light show and environment, you can do that but if you want to really dig in and uncover the narrative and learn the history of how these things evolved over the years, there’s a lot of depth to be found.” 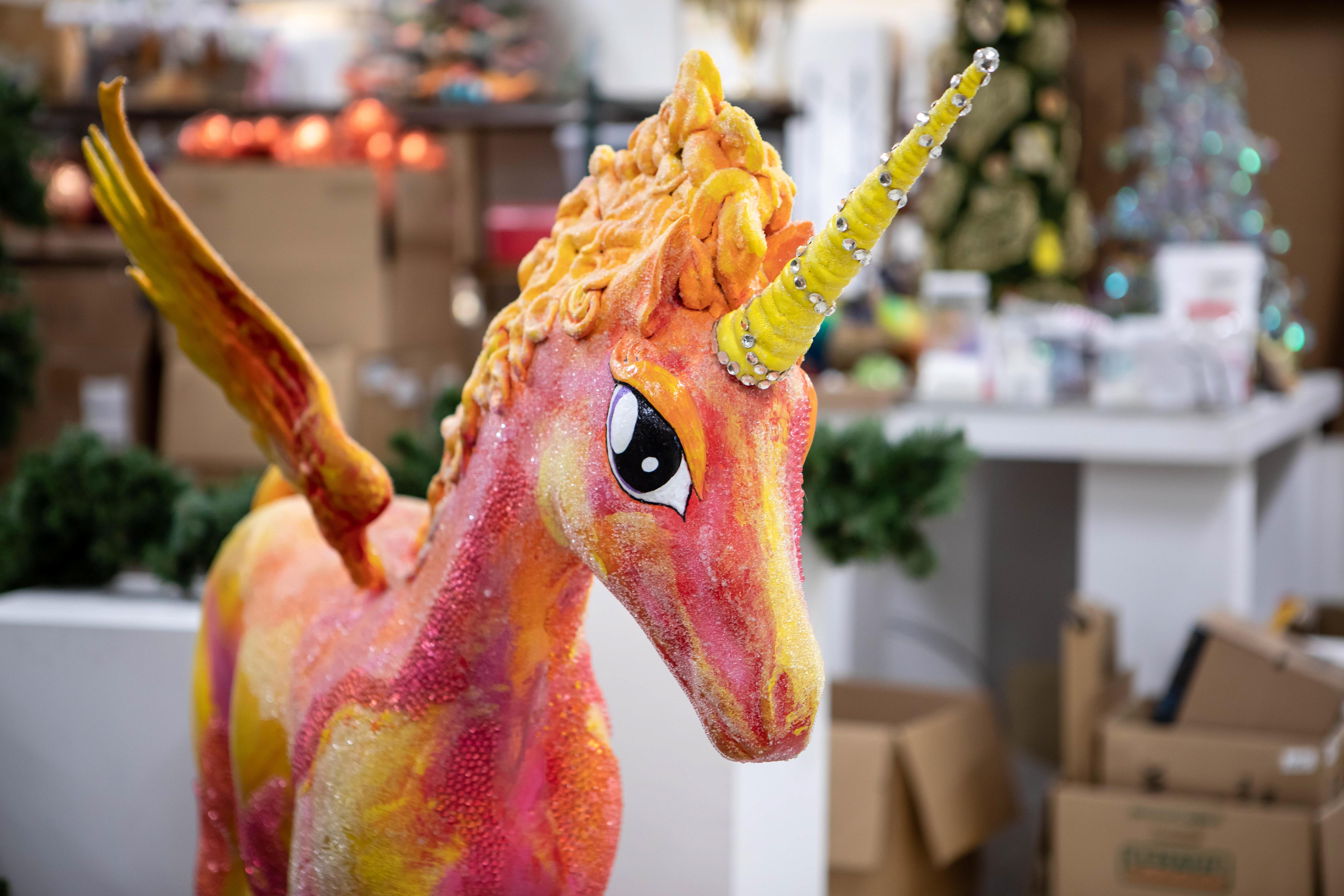 But why Christmas? Well, for Hanzon, it’s a personal attachment to the holiday. After all, it’s his career.

“I find it fascinating what the human spirit demands. I know a lot about Christmas because I’ve been doing it for over 30 years. It gives me a lot of faith in the human spirit because people have been understanding that it’s dark, it’s cold, the harvest is over and we need to party for thousands of years,” he said. “Christmas is supposed to be the antidote. It’s not the poison. People get all stressed out about the holidays, so I have a real interest in trying to show them the magic, the brotherhood, the community and the love. That’s what it’s all about.”

According to Hanzon, department store window displays in America have always been a prime example of the Christmas spirit — for him especially.

“I was raised in Pine, Colorado. I was a mountain boy. When my family would come down [to Denver] during the holidays, it was a really big deal. We’d come downtown and I would think all the stoplights were there for Christmas. Red and green, right? I was mesmerized by department store windows,” he said.

For Hanzon, Camp Christmas is all about evoking that same enchantment.

“When you’re doing window design, you’re counting your success in nose prints and window prints on the glass because you know some kid has been enchanted and leaned right up into that thing,” he said. “At Camp Christmas, I’m getting to do massive department store window displays that you get to walk around inside of. You get to go through the glass. We all deserve those moments of wonder.” 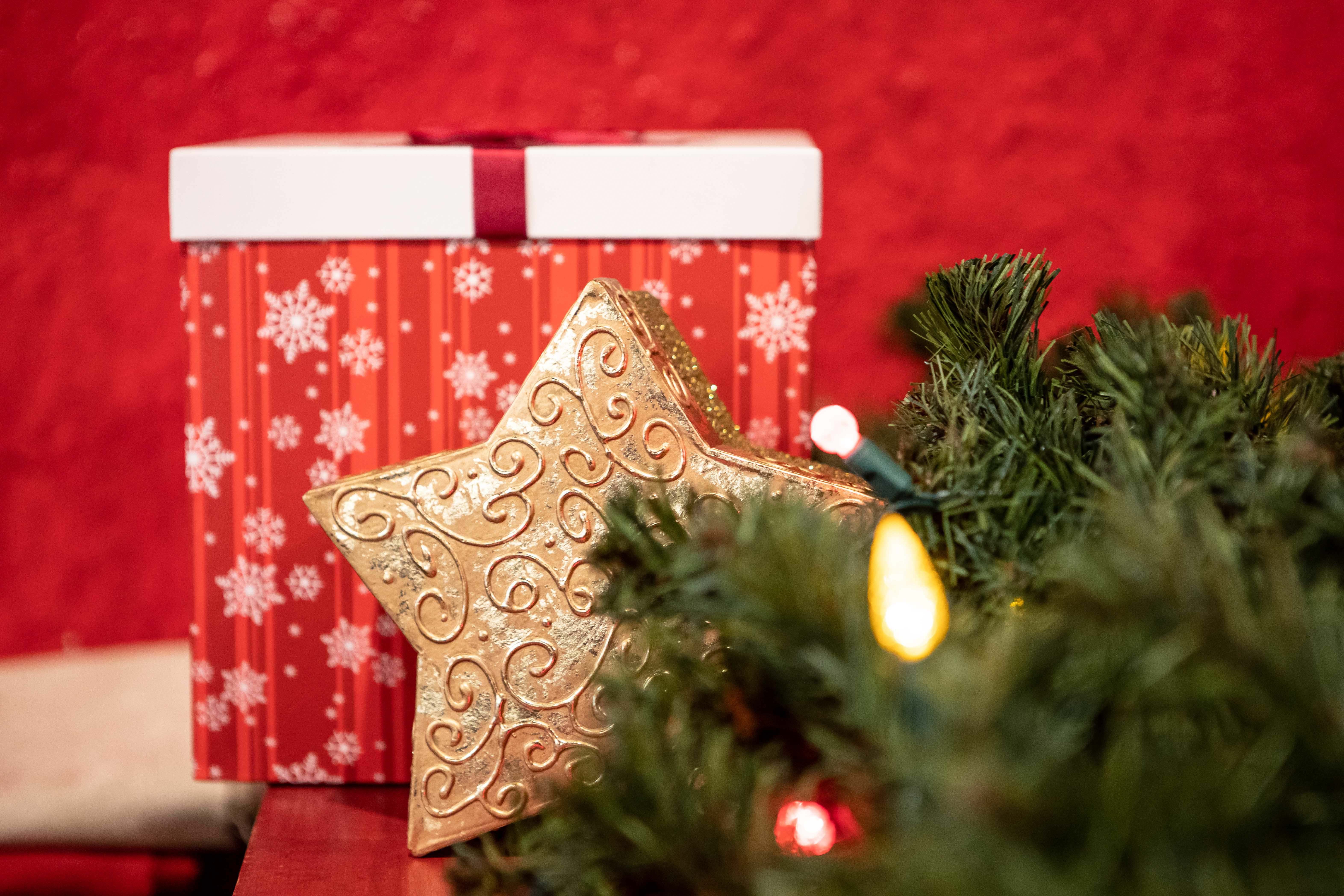 Camp Christmas will open on Thursday, November 21, 2019, and closes Sunday, January 5, 2020. All ages are welcome. Children aged 2 and under are free. Tickets range from $8 – $21 depending on the date and time slot. You can purchase them from the Denver Center for the Performing Arts. The Hangar at Stanley Marketplace is located at 2501 Dallas St. #135, Aurora, CO 80010.