“To share is precious pure and fair” is a lyric from the Marvin Gaye song “I Want You” and in the next year, it will appear in 100 locations around Denver in bronze lettering. The plaques are a gift to the public and to the building owners who will display them for the first year from Mexico City-based artist Anuar Maauad. 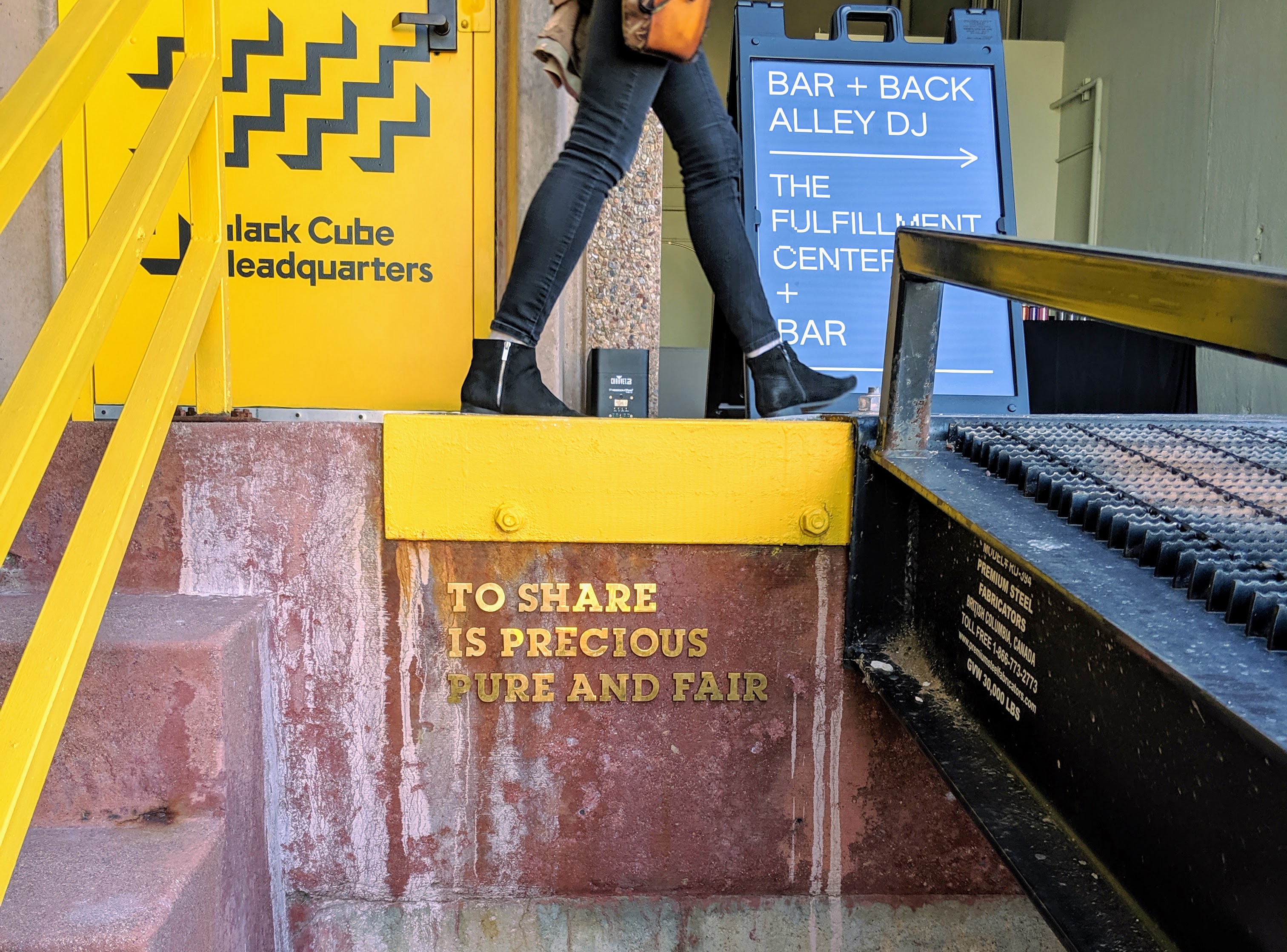 At first glance, the plaques are immediately recognizable due to their font and color — the branding of Trump Tower. But Maauad’s message is much deeper than that. It’s not a critique or a commendation of Trump, but rather a response to the visual language of power. By replicating the aesthetics of the lettering we have all become familiar with, Maauad mixes American pop culture that “defines this particular moment in time,” he explained, with his own idea of what American culture is from an outsider’s perspective. Put in another way, Share is Maauad’s vision of responding to the divisiveness in our country with a message of unity and empathy from another country.

The fact that Maauad hails from Mexico is no small aspect of this series. Although most of us have probably never heard of him before now, he is a celebrated contemporary artist in his home country, where he operates an artist residency program and exhibition space called Casa Maaaud in Mexico City. His demeanor is lively, though he is often pensive and takes time to consider questions posed to him. He did not ignore the impact of Cortney Stell (the curator from Black Cube Nomadic Museum who is organizing Share) inviting a Mexican artist into America with an art series that invoked a controversial presidency.

As a viewer or participant in these plaques, one feels the urge to ask what opinion or stance Maauad has about Trump and his policies. But in order to realize the purpose of them, you have to resist that urge. For Maauad, Share is not about politics or activism. It’s about social dynamics and the art market and the production of valuable things and the virtue of creativity. 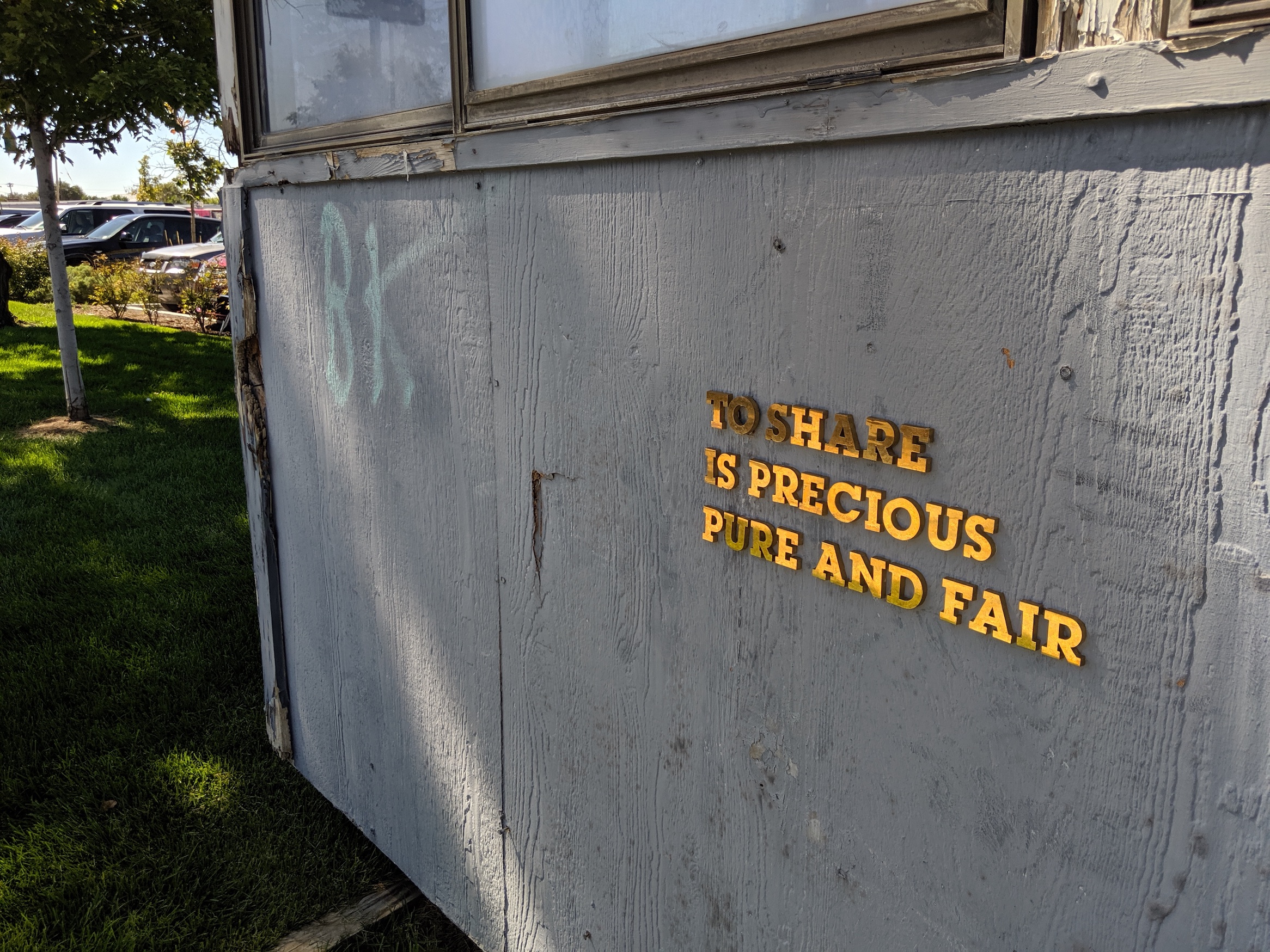 “We build social dynamics based on what we value,” he explained. In America, those social dynamics and value systems are far removed from the ones Maauad has witnessed or experienced in Mexico. In his research during the creation of Share, he asked himself “What is ‘American’?” and then later, “Is America full of limits?” His perception of America from the outside became the foundation, but his upbringing in Mexico shaped the substance. In fact, the actual shaping of the letters is contracted to bronze workers in Mexico, who cut each letter, sand and polish them by hand. It’s also intentional that the phrase, which should certainly use some punctuation, does not include any. The use of commas and periods felt binding and restrictive, and it also forced people to read it in a particular rhythm instead of creating their own.

This interesting reappropriation of a recognizable social symbol isn’t a new thought process for Maauad, even though the bronze plaques are made especially for Denver and will only live within the city limits. His previous oeuvre includes a series of grotesque statues that are created from the molds of sculptures for public officials in Mexico. It is common for public officials (politicians) to commission statues made in their likeness, and in order to make these, an artist must create molds to pour the material into. During this process, the human figure of the statue is shrouded in oddly shaped chunks and wrapped with string or rope. It’s at this point that Maauad finds the visual imagery the most dynamic. These sculptures are his reaction to the obsessive creation of monuments in Mexico, monuments that entomb a certain social hierarchy rather than celebrate the creativity of the artist who makes it.

Share, in many ways, is Maauad’s American version of these inverse statues. He inverted a well-known symbol of power — and also of exceptionalism — into a sentiment of sharing. Imagine if the words “To share is precious pure and fair” replaced the actual Trump Tower signs. One might argue that words don’t have that much power but spend 15 minutes watching newscasters dissect tweets from the President and you’ll be proven wrong.

One of the interesting facts about Maauad and this series is that his first time visiting Denver in person came after Stell and Black Cube had been installing the phrases on willing businesses and homeowners for a few weeks. His first impressions were not what he expected, especially when it came to how Americans treat public spaces. The plaques were placed higher off the ground than he had imagined, and the reason was to protect them from vandalism and theft. “It’s your city,” he lamented, “why wouldn’t you want to protect [the things in] it?” 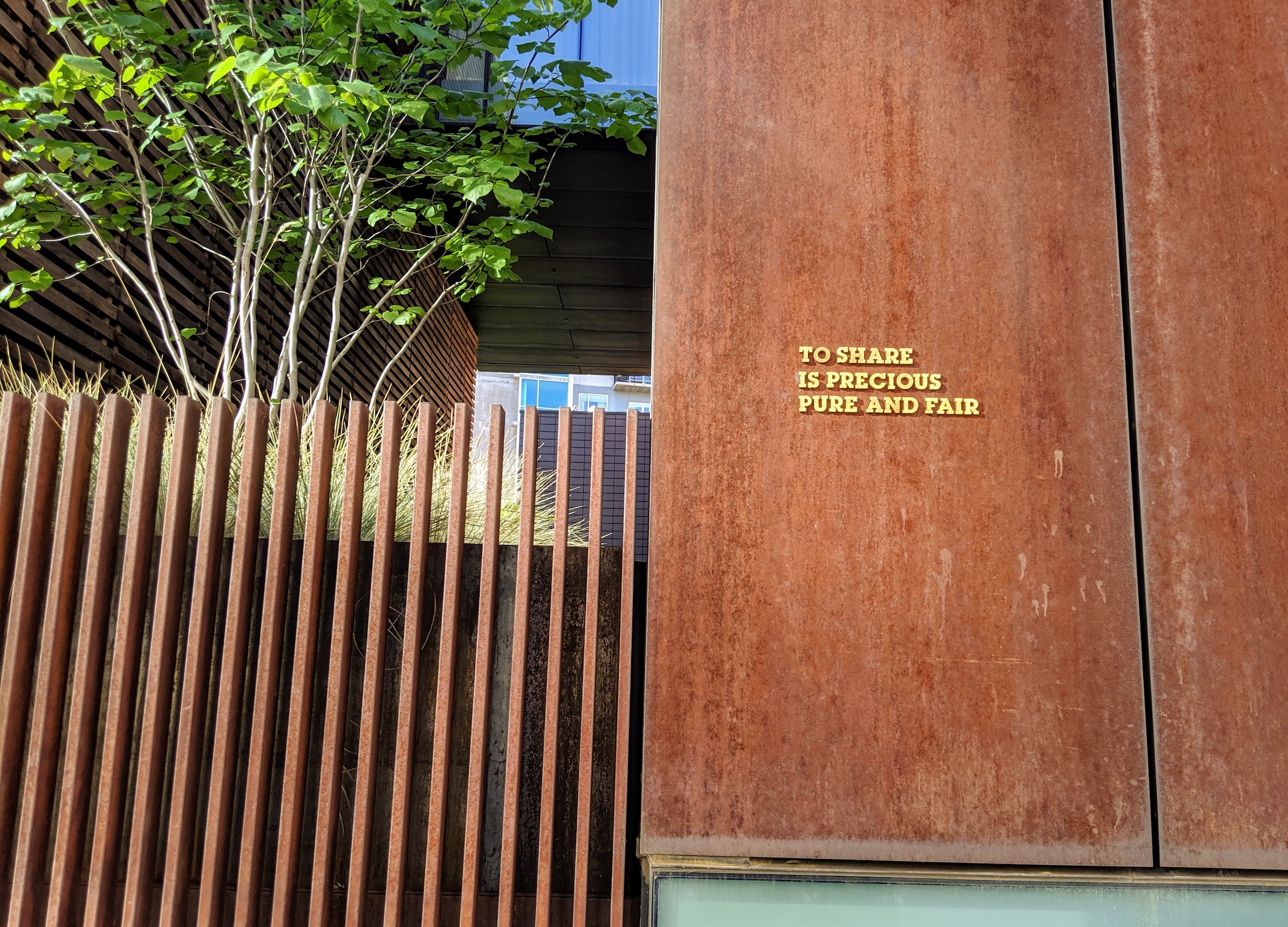 This one is next to the Museum of Contemporary Art, and out of reach from the sidewalk. Photo by Cori Anderson

Despite that setback, the number of participating locations continues to grow and Stell has no doubt that 100 places will be chosen in the next few months. For now, her estimates are that over 25 have been installed and there are 60 to 70 sites in total that have agreed to accept and display a plaque. If you are interested in finding the locations of each plaque, you’ll have to be prepared for a scavenger hunt. No website or packet lists every spot, and the artist, as well as Stell, believes the search for the plaques is part of the artwork. “It’s meant to be curious,” Stell commented, “you should have some openness to it.”

Share is the embodiment of the Black Cube Nomadic Museum’s ethos. Instead of showing Maauad’s work inside a gallery, Stell allowed the artist to think outside the “cube,” which led to a humble and endearing idea that culminated in the 100 “gifts.” These are the results of Stell’s efforts to create remarkable and unique exhibitions, and also as a result of Maauad’s own generosity. It proves his desire to resist the art market status quo, and it furthers the message of the plaques themselves.