As concertgoers pulled into the Pepsi Center parking lots on Saturday night, the rain was coming down hard. Despite the wetness, many were in no hurry to get inside, leisurely strolling under umbrellas chatting with their significant others or laughing in groups of women out for a girls’ night. The relaxed and upbeat attitude audience members took with the weather set the tone for the night as people took their seats for “An Evening with Michael Bublé.” 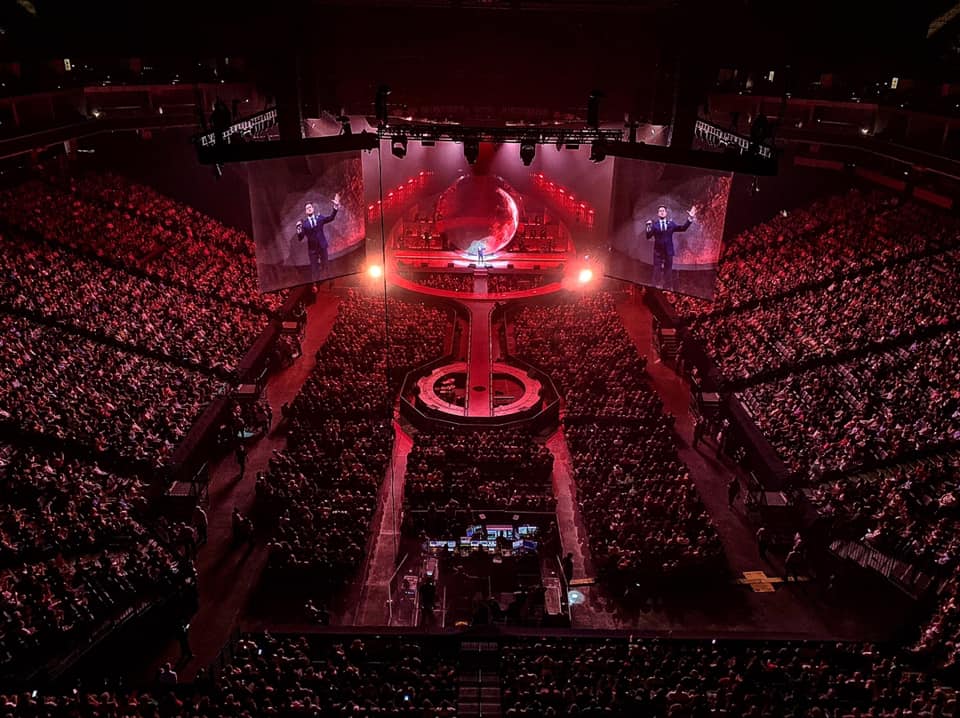 After a few false starts, the strings and brass — set up on risers in a bandshell shape at the rear of the stage  — began to play. Bublé appeared at the top of the risers and his smooth baritone voice started off the night with a cover of “Feeling Good.” He made his way down the risers and around the catwalk into the audience, blowing kisses to the room along the way. His dance moves at times felt awkward, but in a way that only made him more endearing to the crowd and encouraged everyone to let loose for a night.

For dedicated fans, this long-awaited night with Bublé didn’t seem possible two and a half years ago. In October 2016, he and his family received devastating news. His then-three-year-old son, Noah, was diagnosed with liver cancer. Both Bublé and his wife put their professional lives on hold to focus on Noah’s healing, which included Bublé canceling his 2017 world tour.

Several times throughout the night, Bublé alluded to his son’s cancer diagnosis, saying that he truly didn’t know if he would ever be able to perform again. Luckily, Noah entered remission in 2017 and Bublé slowly made his return to the public, giving interviews about the time he spent at his son’s bedside and releasing his album Love in November 2018. It was clear to the audience that the time he spent focused on his family had brought him back to the stage a humbled and grateful man. He expressed feeling blessed and coming to the stage with “an attitude of gratitude” with genuine emotion. 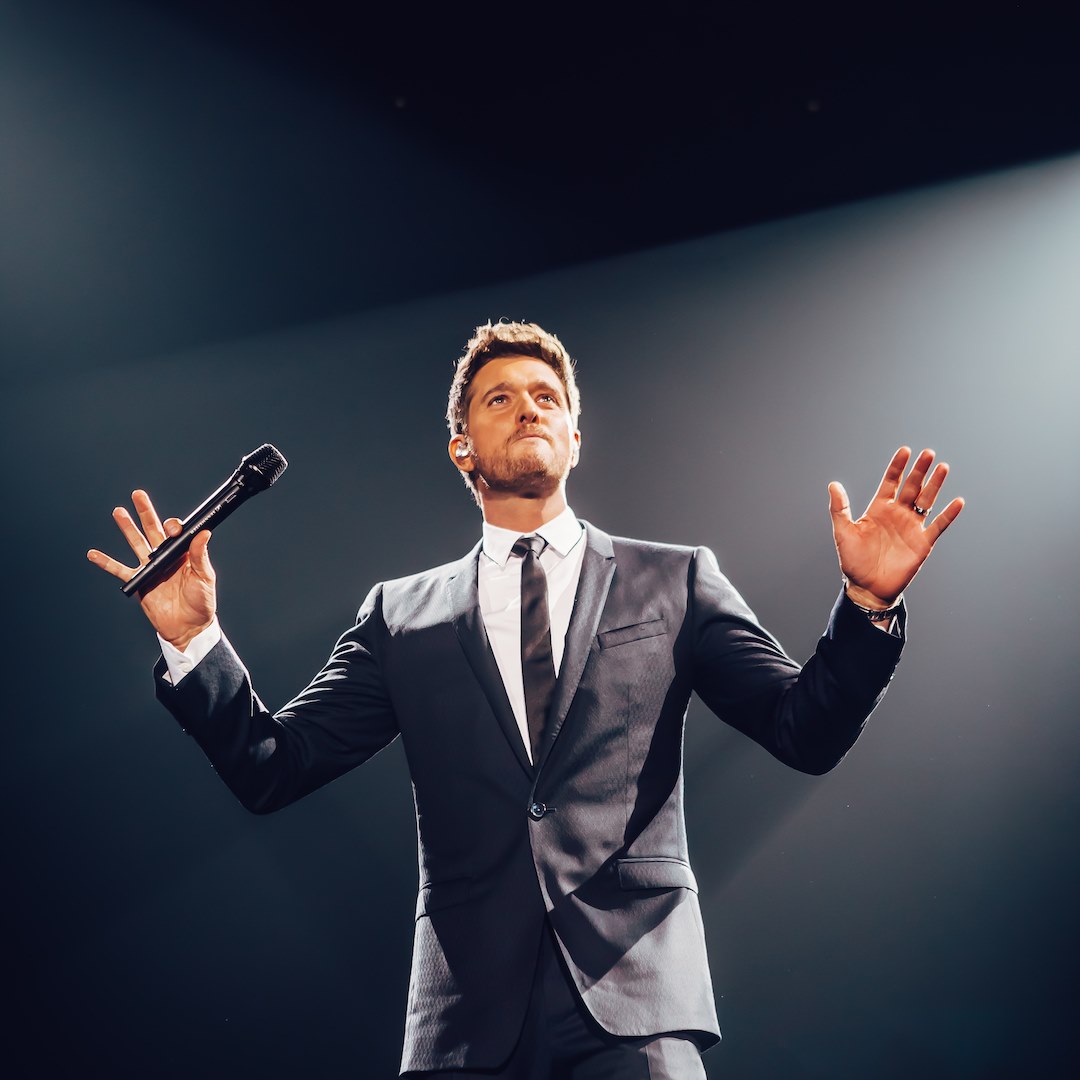 Though there were many bittersweet reminders of the reason for his hiatus throughout the night, the time between songs was filled with his self-deprecating, quick humor. There was no absence of that throughout the night. After a couple of songs, Bublé spent some time talking about the pressures he feels as an entertainer, then saying that performing in Denver feels easier “knowing everyone’s on mushrooms,” alluding to the recent city ordinance decriminalizing hallucinogenic mushrooms.

After beginning an apology to the audience for the drug jokes everyone knows all Denver concerts are littered with, he was distracted by a glimpse of his green suit in the projections of himself on the screens. “I realize I look more like a German policeman,” he said, attempting a German accent to introduce the next song and making callbacks to his appearance through the rest of the night.

As a seasoned performer, Bublé knows how to balance light, joyful moments with the earnest sincerity of his love-filled music, whether he’s singing a ballad or a more upbeat pop song. Before singing “Forever Now,” Bublé explained to the audience that he created the song for his kids with the intention of expressing his feelings “about time and the sentimentality of how fast it goes.” Throughout the song, Bublé sat on the floor of the stage while the screen behind him powerfully portrayed this progression of time by depicting a timelapse of a child’s bedroom through various stages of life. 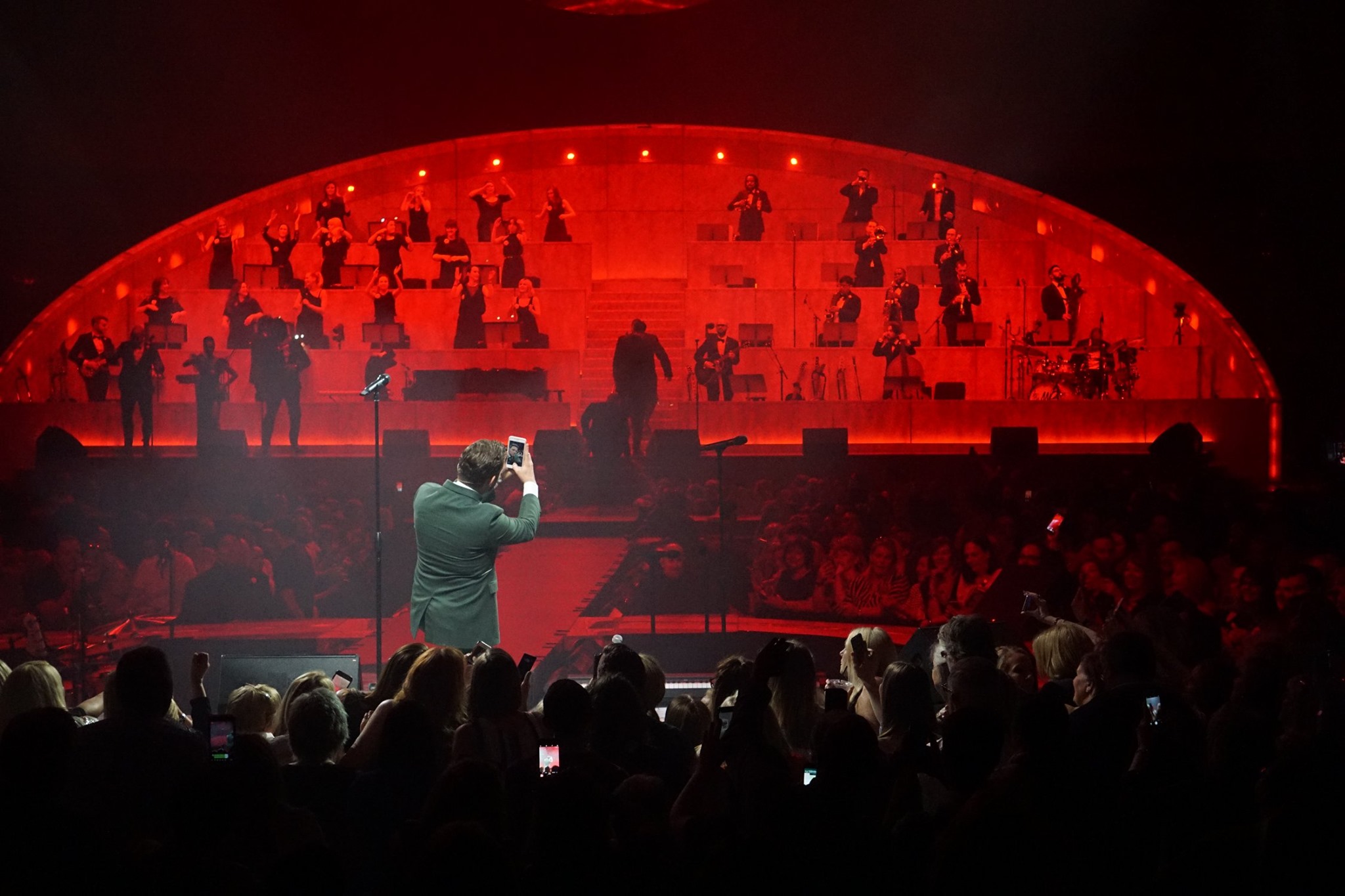 At one point, Bublé and several band members moved out to the catwalk as he recalled his days of performing in clubs. In an attempt to make the arena-sized room feel more like an “intimate nightclub,” lanterns descended from the ceiling. He moved into more jazzy hits like Louis Prima’s “Just a Gigolo/I Ain’t Got Nobody” and encouraged the crowd to stand up and dance à la Pulp Fiction’s Mia Wallace and Vincent Vega to Chuck Berry’s “You Can Never Tell.”

Interacting with the crowd is one of Bublé’s favorite parts of being on stage, knowledge audience members were clearly aware of before coming to the show. Many people surrounding the catwalk and stage came prepared with Sharpies and CDs to sign. Audience members excitedly offered their smartphones up to Bublé and he happily obliged, walking around the stage singing to the phone camera before returning it to its owner.

A tradition at his shows on this tour, Bublé offered a chance for an audience member to perform their “shower song” to the room. He handed the mic to a girl who bravely takes on the challenge. Before she began her rendition of “Feeling Good,” he attempted to guide her to stand in front of the camera with minimal physical contact. “I don’t wanna touch you too much because my wife is far away, but never that far away,” he jokes, saying that he prefers taking the Keanu Reeves approach of hand-hovering when interacting with fans. 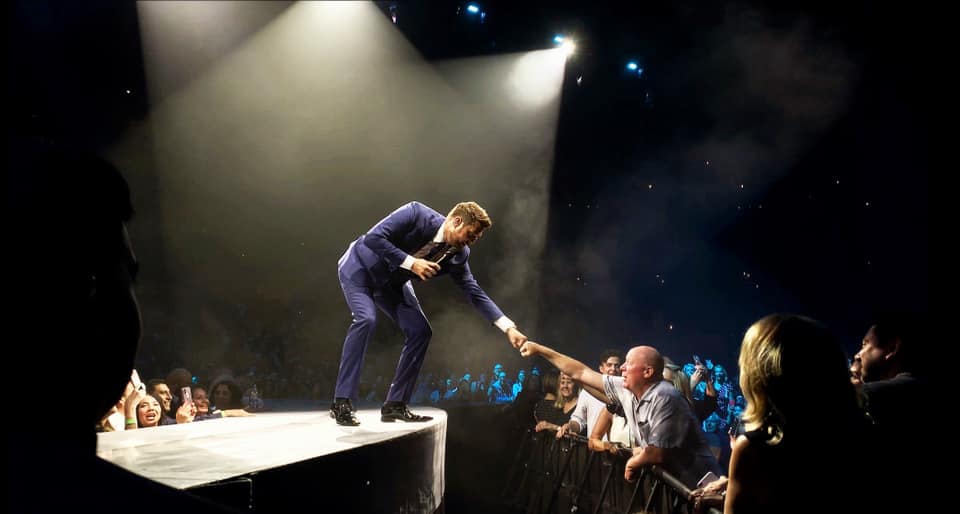 As the night neared its end, Bublé took time to acknowledge the string section – all Colorado musicians – and sang “Everything,” a very clear crowd favorite. Once more expressing his gratitude for being able to perform on stage again, he promised to come back to Denver “over and over” again.

His final song was an emotional cover of Gwen McCrae’s “You Were Always On My Mind.” He sang with his hand over his heart and looked out at the crowd with shining eyes. There was no reason to question the sincerity of the gratitude he spoke about all night – anyone could have read it on his face. Making his way out on the catwalk for the last time, he finished the song with his fist in the air, a fitting gesture for his triumphant comeback to the stage.