Plenty of art is political, but generally, the door doesn’t swing both ways — not many politicians are artistically inclined. However, Governor Jared Polis has been an art collector for a number of years and he’s brought some of his secret art stash into the executive offices at the Colorado State Capitol building in Denver. He’s also adding some new ones from local and regional artists. Although some of the art that he inherited with the office remains hanging — like a gorgeous quilt given to Governor Hickenlooper during his term — many of the pieces now adorning the walls are due to Polis’ love of art, specifically contemporary art. 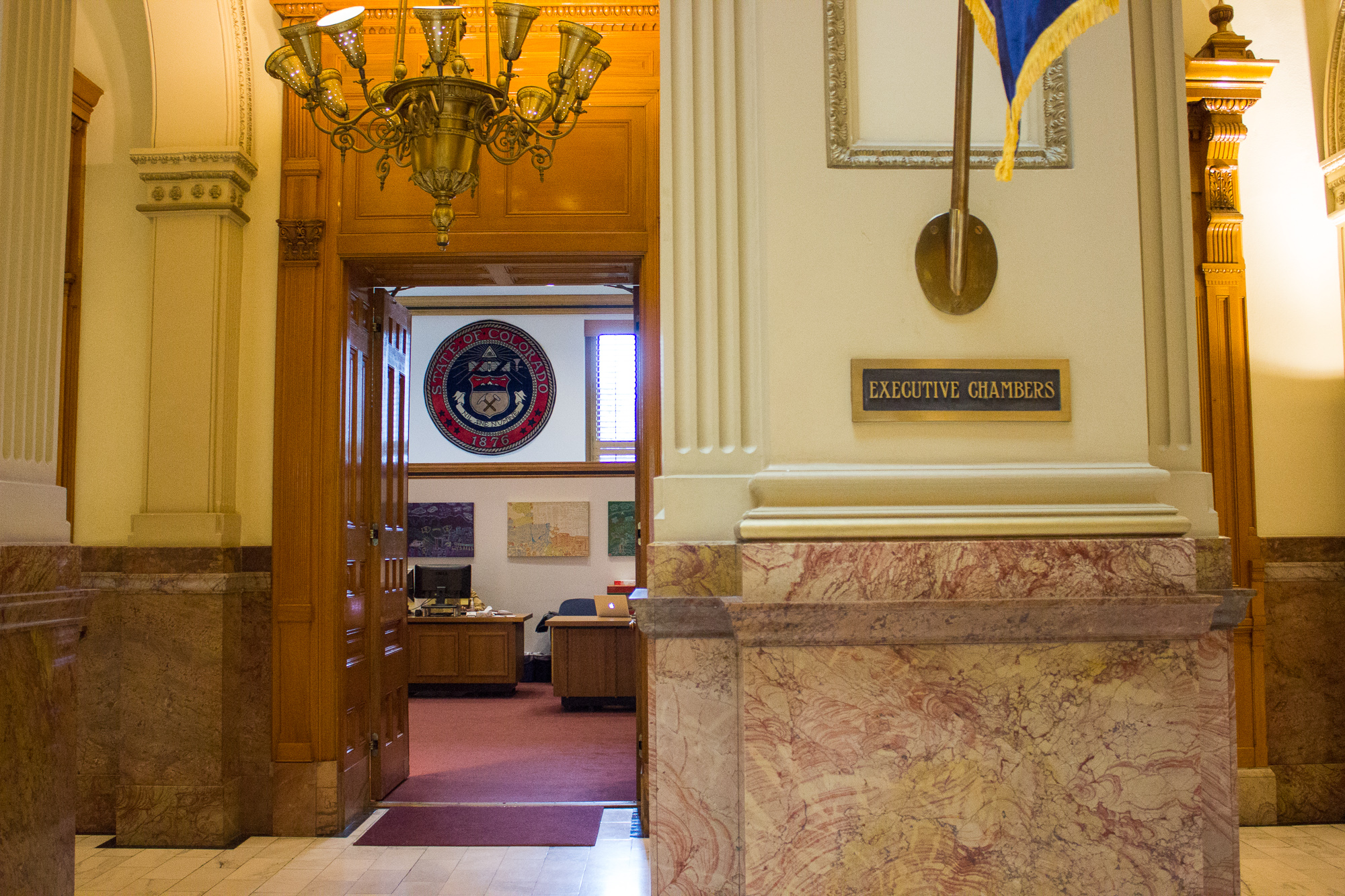 “Art helps give people a sense of place. Each Governor has the chance to make the office their own. It was important to me to have art in the office for that reason and to give anyone who comes in a chance to experience it,” Polis commented.

The first three pieces that now hang above the receptionist’s desk are by AJ Kiel of Access Gallery — a spot in the Art District on Santa Fe that facilitates creative opportunities for people with disabilities. Each one represents a different city in Colorado — Boulder, Denver and Fort Collins — and the Governor hopes to collect more cities or regions drawn by Kiel in the future. Kiel’s style is minimalist meets pointillism, with linework that can make you dizzy if you look too long. Each one features a repeated character — Light Bulb Head Dude — but to find him you’ll have to search in a Where’s Waldo-inspired hunt.

Altogether, the Governor’s office acquired seven pieces from artists at Access Gallery — with four prominently hanging in the waiting area for anyone to see. The other three are further in the recesses of the office, enjoyed by the Governor’s many busy staffers. Two of them line a narrow hallway while another sits above a separated desk. This final one is part of a larger series where thousands of stickers are layered to produce a single image. All the stickers are provided by Sticker Giant, based in Longmont, and stuck onto the canvas by the ArtWorks Artist team at Access. 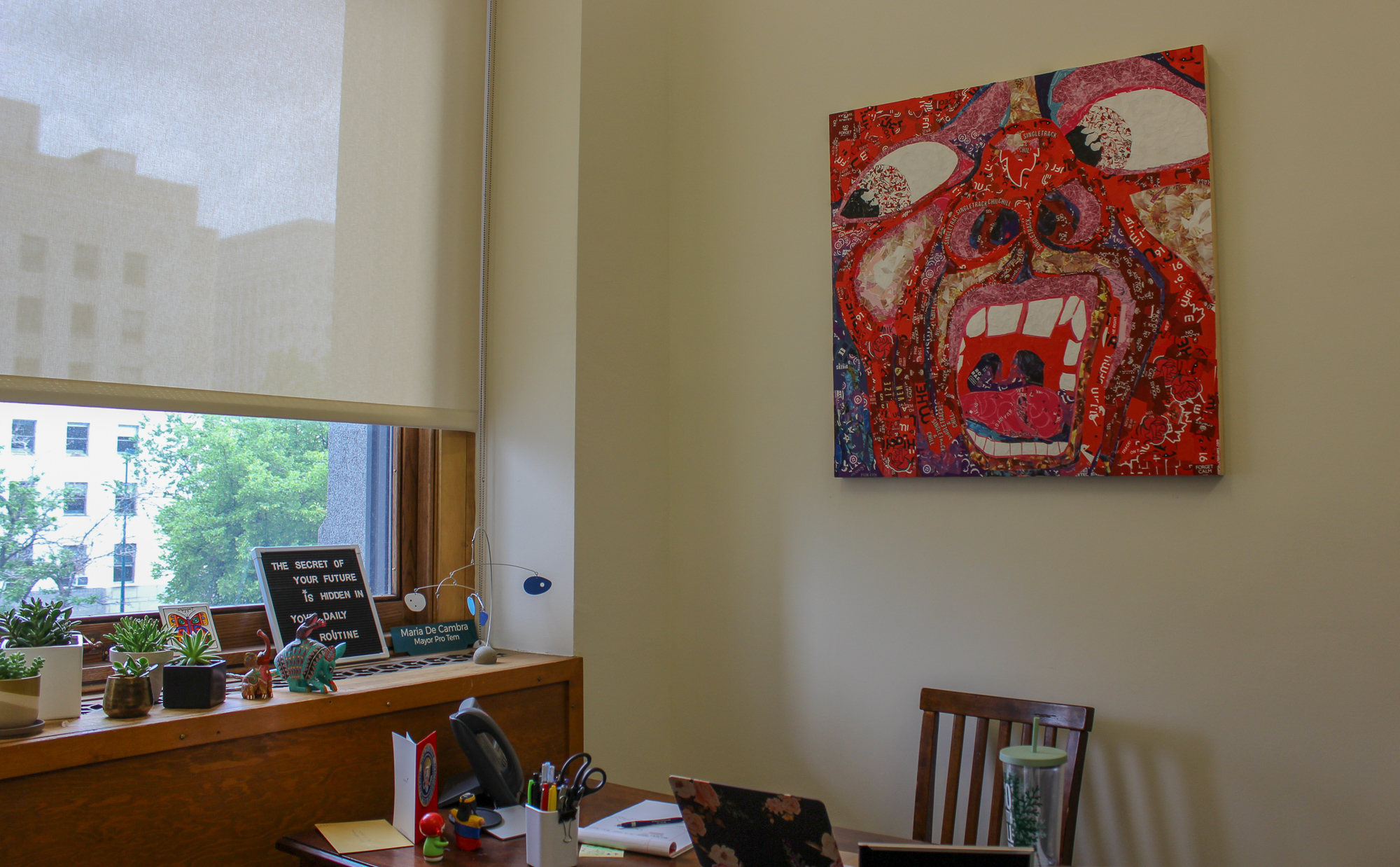 But the Governor’s personal art collection is mostly found in the big, wooden-walled office that already holds a floor-to-ceiling John Fielder photograph of somewhere idyllic in Colorado. In there, four original pieces by the Italian artist El Gato Chimney capture the imagination, while two other originals by New York-based artist Mary Crabapple dominate the back wall.

Crabapple’s paintings are distinct in their size — at least five feet tall — and because of their brutally-critical political commentary. Created as part of a series called Shell Game, consisting of large-scale paintings about modern revolutions (think the Arab Spring and Greek anti-austerity protests), these two pieces comment specifically on the “debt machine” and the mortgage bubble. A few years ago, one of them was lent to a gallery in the UK for an exhibition — a sign that Polis’ art collection is both valuable and timely, a rare combination.

To lighten the mood, and to appeal to the friendlier side of his tastes, Polis commissioned mathematician-turned-artist Charles Morgenstern to paint 10 Colorado-themed canvasses as well as some pop-art inspired ones that are scattered throughout the offices. In the main wooden room, most of the Colorado-themed ones hang proudly together — odes to fishing, camping, hiking, biking, mining, renewable energy, the Broncos and more. But my personal favorite of the series? The David Bowie tribute. 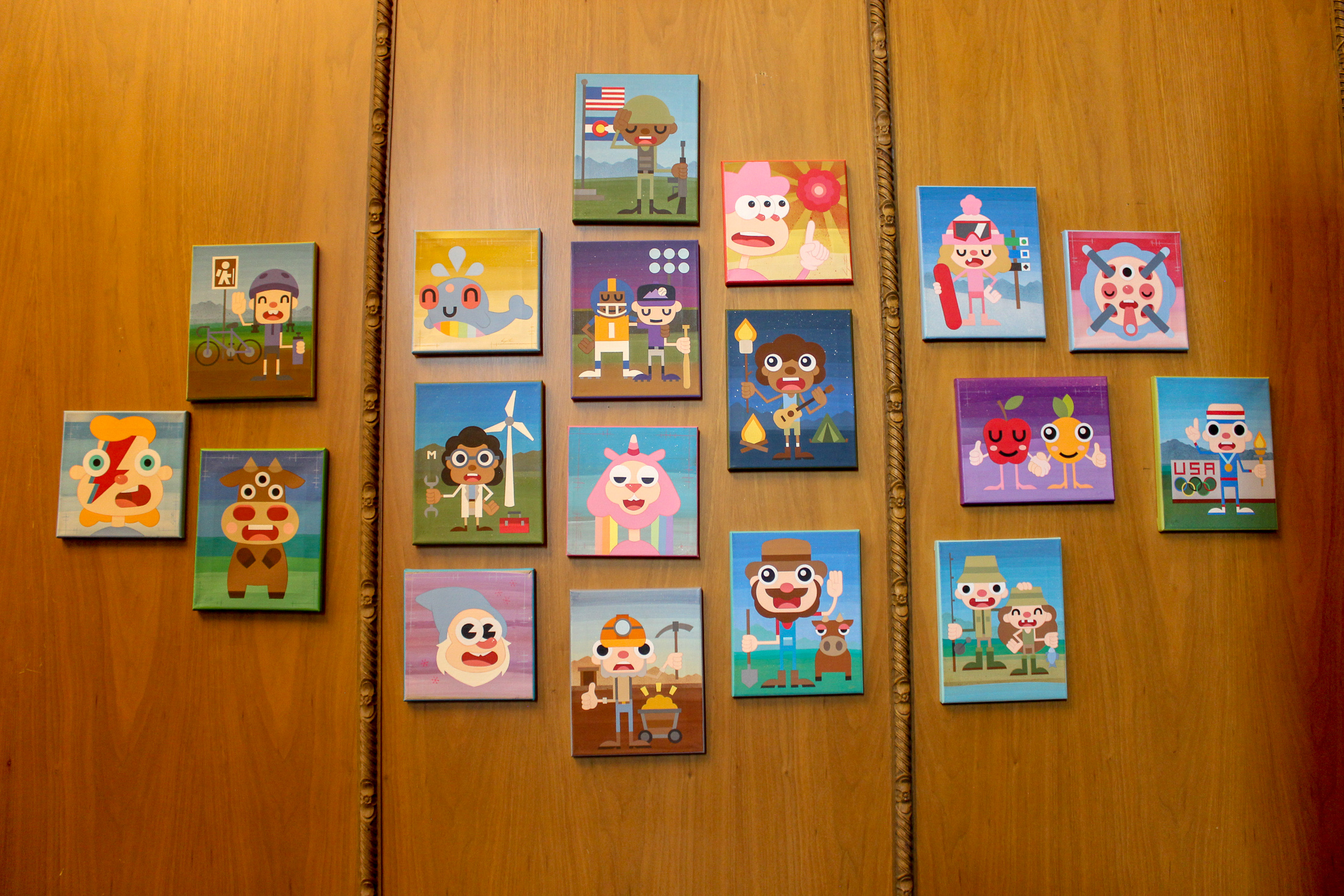 Chimney’s work extends beyond the big wooden room, with two additional pieces of similar size in the offices. All of Chimney’s pieces were, at one point, hanging in Governor Polis’ house and might be the biggest indicators of his personal taste — a dash of surrealism guided by photorealistic detail. From my approximation, Polis appreciates muted tones punctuated by small pops of color — a tactic that Chimney excels at.

While taking the personal art tour of the office, the Governor made sure to point out a few other items that wouldn’t necessarily count as art, but are defining totems of his career. One was a framed poster with blueprints for Star Trek ships, with signatures from some members of the cast. Another was an amendment he passed while in Congress to allow industrial hemp research — that is printed on hemp paper. Hanging in one corner is a white silk scarf the Dalai Lama gifted to Polis while the Dalai Lama was visiting Boulder in 2016, and in the opposite corner sits a table with the Hopi sun symbol engraved in the middle. Between the sci-fi nerdiness and sophisticated art choices, Polis is hoping to be a capable leader at the helm of Colorado’s rapidly growing creative economy. 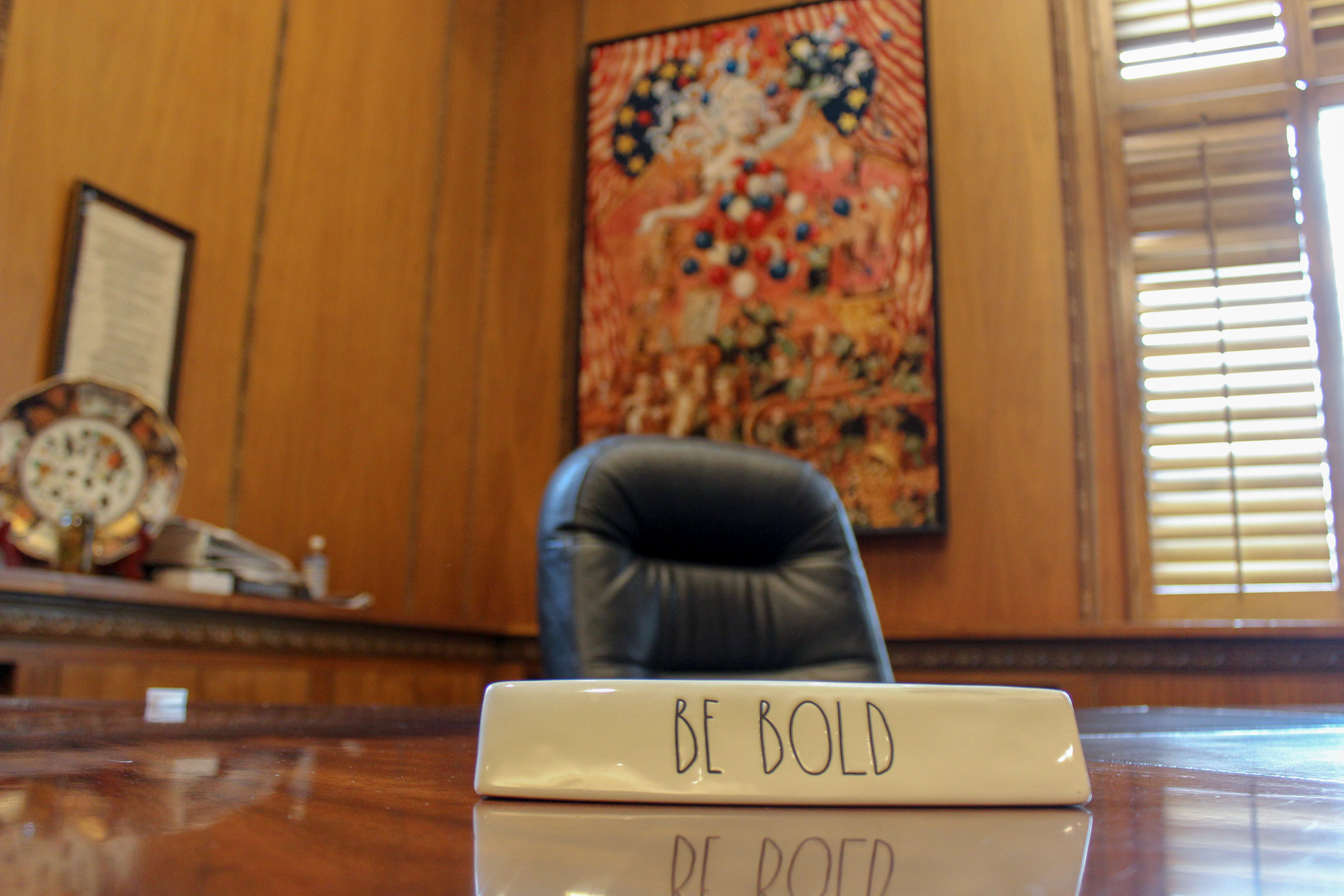 “Colorado has so much to offer when it comes to the arts and our state has really become a hub for creativity,” he mentioned. “Each corner of our state celebrates art in its own way, it’s hard to pick just a few events. The Cherry Creek Arts Festival and shows at the Denver Center for the Performing Arts are just a few examples of the many opportunities we have to experience great art.”

During a one-night pop-up event at the Governor’s Mansion last week, where artists from local gallery K Contemporary displayed new art amidst the historical residence, Polis mentioned that his understanding and love of art comes from his parents — his father is an artist and his mother a poet. As a tribute to them, he’s also included two silkscreens they co-created in the ’70s in his office. About the pop-up, the Governor explained, “I really enjoyed the exhibition at the Governor’s mansion, we had a lot of up-and-coming Denver artists represented there. It was exciting to see the juxtaposition of the modern works with the older architecture of the mansion.” 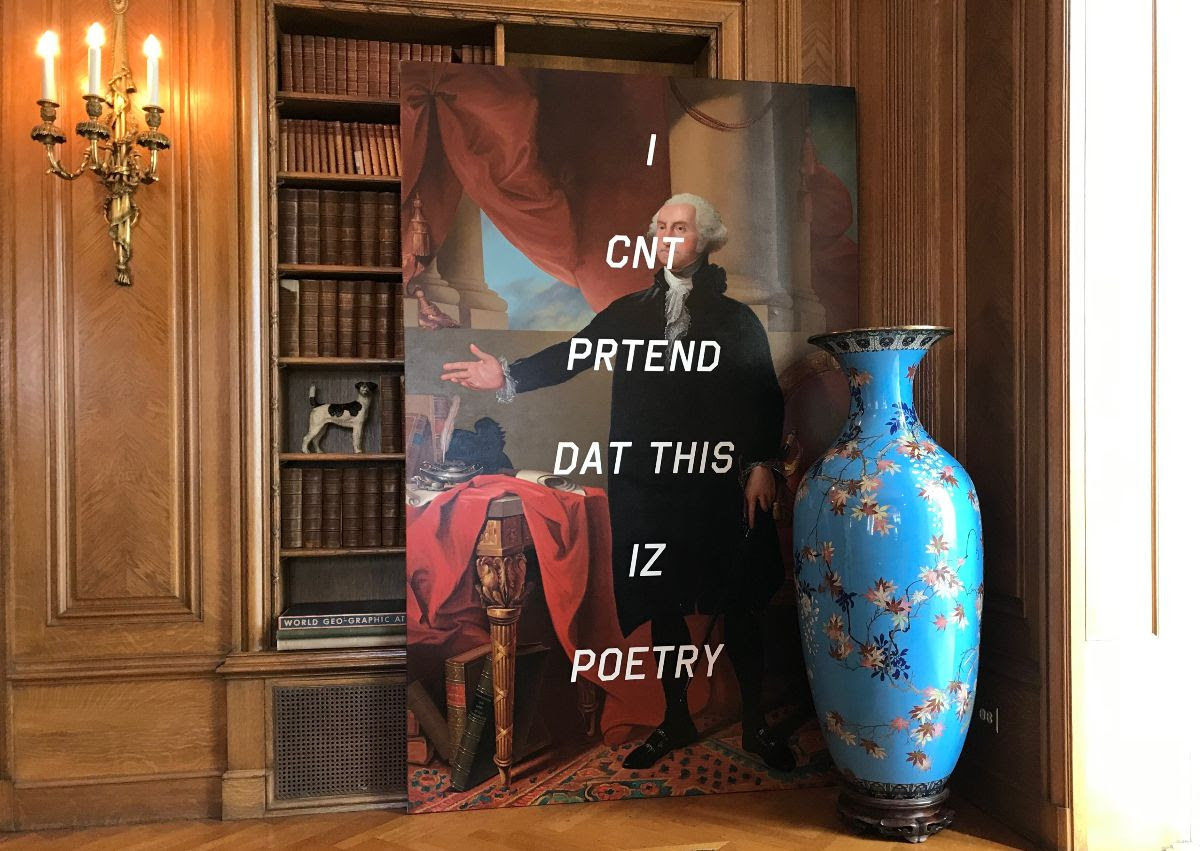 Art by Shawn Huckins inside the Governor’s Mansion during the one-night pop-up. Photo courtesy of K Contemporary

Although Governor Polis’ artistic choices and curation inside his office are unique, contemporary and personal, he is not the only one in the Capitol building who cares about creativity. Under the Office of Economic Development and International Trade (OEDIT), Colorado Creative Industries seeks out opportunities for local artists — including a rotating exhibition on the basement level of the Capitol and inside the Lieutenant Governor’s office. At the time of our tour with the Governor and his staff, there were three Colorado-based artists with work on display — Natasha Seideneck, Kevin Hoth and Melissa Lynn.

Since this is only the beginning of Governor Polis’ term, artists in Colorado can look forward to a few more years (at least) where their creative capital is appreciated and displayed with pride. And when his time in office ends, some of the art that he brought with him will remain in his place, reminding future Governors to think beyond the typical Colorado landscape painting.

All photos by Cori Anderson, unless otherwise noted.