DiNK Comic & Art Expo 2019 graced Denver for the fourth year in a row this past weekend with a menagerie of independent comic book artists, graffiti artists, tattoo artists and more. The event featured two days of panels, workshops and hundreds of exhibitors showcasing their goods in an art-focused convention.

The expo was co-created by Charlie LaGreca, Brian Essig-Peppard, Jim Norris (who also owns Mutiny Information Cafe) and more amazing individuals. Their goal was to extract the best parts of comic conventions –  the art– and condense it into one expo focusing more on independent artists. Comic book art is at the heart of the event but you’ll also find street art, tattooing and more.

Once again, the expo took place at the McNichols Civic Center Building as a part of their partnership with the city to further its mission in uplifting independent artists. This partnership allows DiNK to support Denver’s artists and other artists from all over the entire globe in their efforts to pursue their passion in niche comic book art.

Bonnie Graham, the executive producer of DiNK Comic & Art Expo shared her favorite part about DiNK and said, “I love supporting creative, independent artists. And I feel really passionate about giving space to people who may not otherwise have space at larger conventions because they’re doing something that is unique and different. And I love that DiNK has the ability to do that, to give those people a place to feel comfortable and to build community.”

As one of the founders, LaGreca made a point to highlight the inclusivity of the event. “I like to think we’re embracing the weird. We want to embrace all identities and genders and beliefs as long as they don’t harm someone — we are totally about that idea… I feel it’s really important to do something like this where we’re kind of activated together and we’re reminded that the world isn’t a terrible place.”

Not only did the expo focus on inclusivity it also welcomed people from all different nationalities. LaGreca mentioned they had roughly 13 different countries represented including people from England, Mexico, Canada, Venezuela and Brazil.

DiNK proved to be the perfect place to find tons of flavors of comics, art, tattoo art and other wonderous things really giving independent artists a chance to shine. 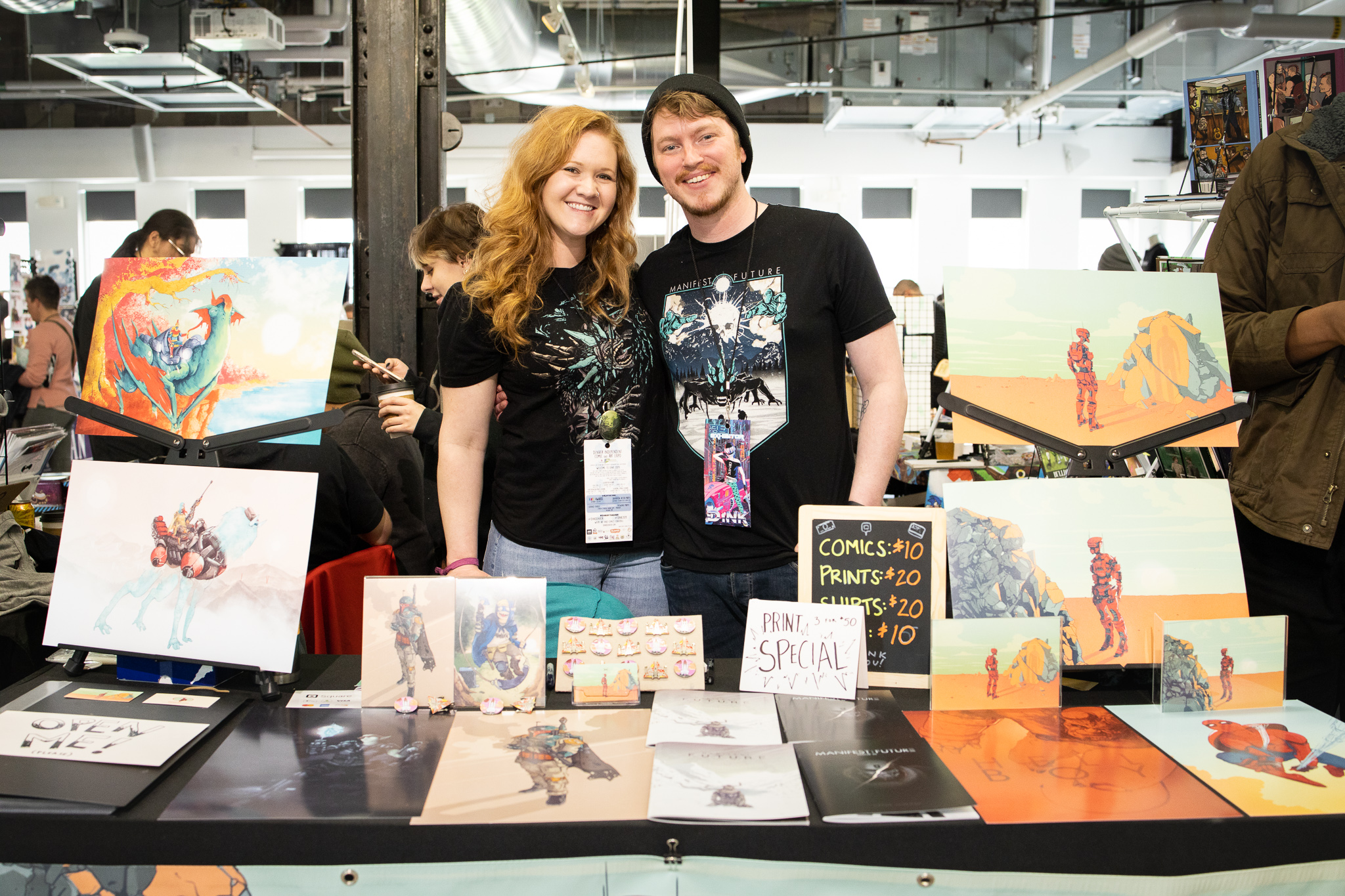 Derek Knierim and his wife with Knierim’s work.

Local artist Derek Knierim decided to present his art at DiNK 2019 after exploring the convention last year. He explained he was impressed by the quality level and it drove him to showcase his work — which is based on a space-themed, post-apocalyptic world.

“I think my favorite thing about [DiNK] is [not only] the variety of art styles but the quality and professionalism of all those styles. I’ve been to some conventions where you can definitely tell that there are certain skill levels that aren’t exactly there… But [at DiNK] it all has a bar of quality that’s across the board. Everybody is professional and really well established in their style,” he said.

In many capacities, live art was a running theme throughout the weekend. You could watch live paintings in front of the McNichols Building even before walking into the expo. Essig-Peppard, DiNK’s creative director, was no exception as he took a seat within one of the exhibitor halls and started live illustrating a mural.

“I started with a blank canvas and as I talked with people that came up to the table and we were just chatting about their interests and their inspirations, I just started free associating and creating this left to right mural that [we] will be actually raffling off the end of the day,” he said.

Essig-Peppard explained DiNK has changed over the years and it continues to grow, but in a natural way. To him, its success is seen in the connections and relationships made between independent creators, as well as with those who enjoy their art.

“This is a show designed for indie creators by the local crew. And it’s something we thoroughly enjoyed doing. The interpersonal connections you can make here are different than most big cons. It’s less corporate feeling and it’s more direct access to a creator.”

Local and popular street artist, DINKC, was able to join in as one of the hand-picked live painters to create a mural in front of McNichols Building. His presence as a street artist (alongside other street artists) proved the event was dedicated to blurring the lines of the art and comic book communities. Such sentiment was not lost on DINKC.

“I love the whole comic book community and seeing people just paint, draw and whip out amazing drawings just like that, which is something that I love to do as well… [It’s] seeing that whole different world.”

Even though DiNK really hones in on independent creators, the weekend also had some special guest appearances. You would have had the chance to meet some amazing people such as animation legend Ralph Bakshi, podcaster Travis McElroy and more. If you were a huge fan of some classic comic book series you could have also snagged a signature from Richard and Wendy Pini, the genius minds behind the hit comic series Elf Quest. Both Wendy and Richard gave major praises to DiNK for the atmosphere that was built.

“DiNK is not about commercialization… DiNK is about the art, the art of writing, the article, publishing, the art, drawing and illustration and creativity. The vibe is so very different from some of the bigger conventions that are really, really focused on mass media. This feels so much like home in so many ways because we got our start at the beginning of the independent comics movement and we feel that energy here and you don’t feel like the bigger cons,” explained Wendy.

“If you want to know how it’s done, if you want to feel the energy of creation, if you want to just be with people who are so passionate about making the stuff that you think you know about because you’ve seen it on a movie screen, then you got to come here,” said Richard. “It’s not a corporate franchise. It is raw bloody creativity on display.”

As its creators and supporters explained, DiNK is a special place. You don’t need to be a fan of a certain comic book or prescribe to a particular nerdom — rather the Denver event is all about creativity, passion and above all, a love of art.