Then again, Mutiny isn’t exactly a “coffee shop,” despite the fact it has a full coffee bar and over a dozen tables for people to do whatever their caffeinated beverage inspires them to do. Mutiny’s unique unto itself. It’s like a coffee shop rolled into a used bookstore/record store with a dash of arcade, presented with accouterments of music venue, comedy club, and general space for people of diverse cultures, demographics and sexual orientations to gather. It may just be the coolest place in Denver. 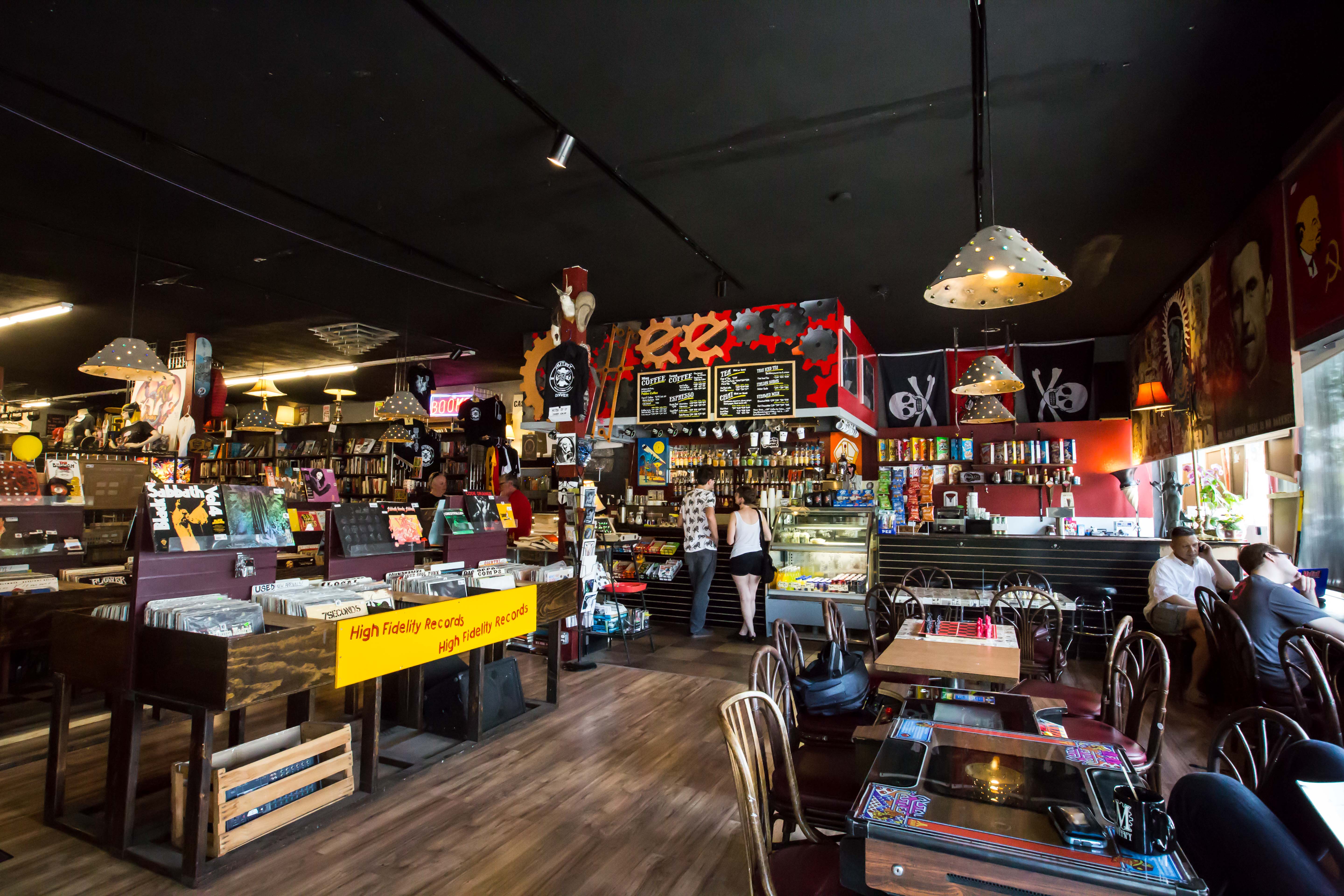 And Mutiny’s definition of “cool” is as vast as its outrageous collection of memorabilia. Walking into Mutiny Information Cafe is like walking into a physical version of that abstraction called “Pop Culture.” The last several decades of American pop culture surrounds in diverse forms, overwhelming in all the best ways. Stroll through with a friend, and you’re bound to notice entirely different things. Whatever you happen to dig, that’s cool.

The wide array of stuff creates a sense of celebration to Mutiny. From pinball machines to comic books to Adult Swim posters to movie theater seats to classic literature to old board games to typewriters on pianos to records and cassettes and old cereal boxes arranged on a shelf, no element of culture gets shortchanged. The massive collection of things tells a story too large for any human to tell. In Mutiny, you get to experience that story walking through the densely-stocked aisles.

You’ll find Mutiny on South Broadway — though co-owner Jim Norris refers to it by its proper name, “the Baker Neighborhood.” (Don’t call it “SoBo” around him.) As with countless parts of Denver, people are flocking to live in the Baker Neighborhood. New apartments are being constructed, abandoned buildings are being repurposed and gentrified, and establishments like The Punch Bowl — a “super uber hipster bar” in Norris’ eyes — are popping up amidst the many independent businesses that give the neighborhood its unique character. 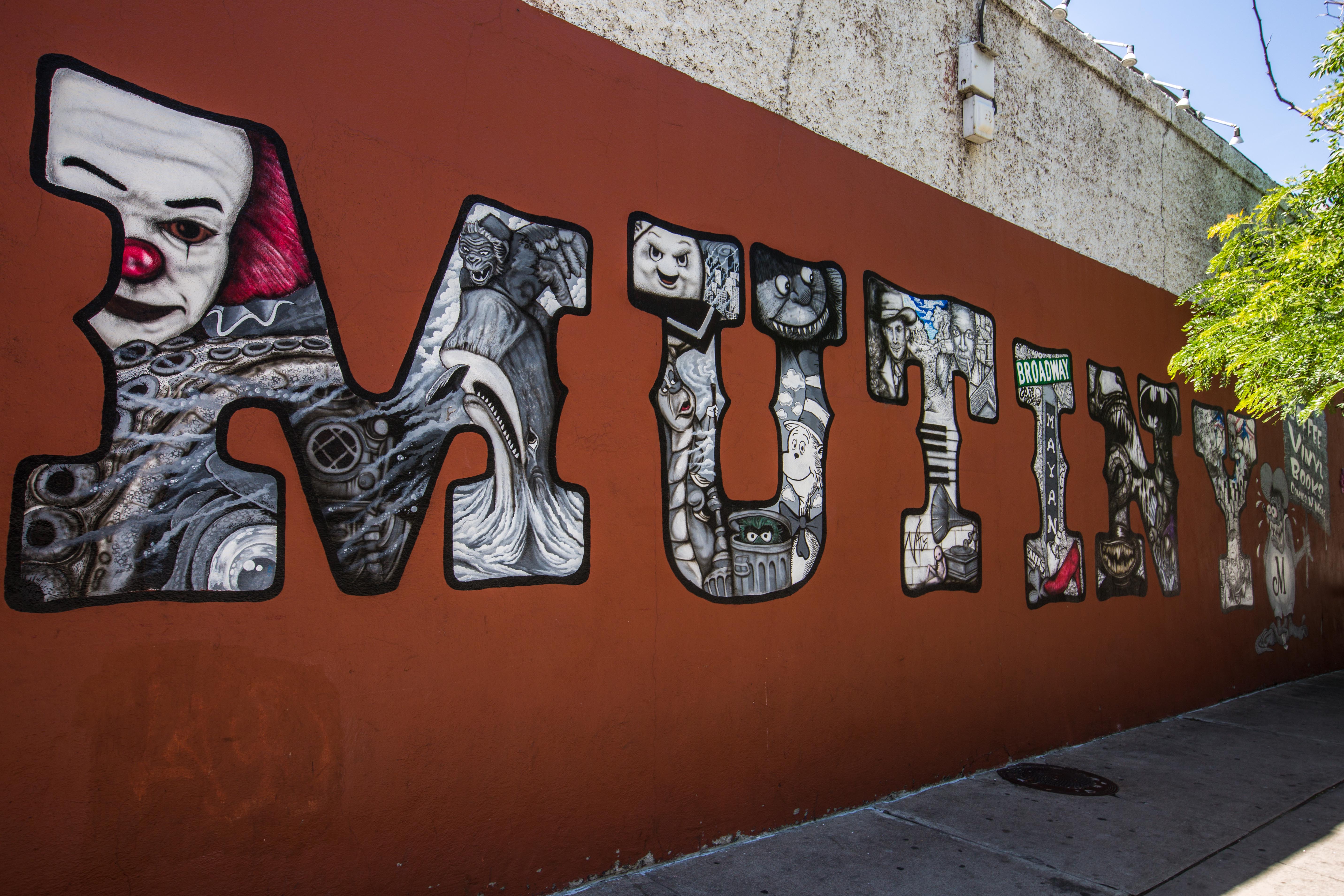 One look at Norris and you’d expect him to loathe the changes. He’s a tatted-up, cig-smoking, Beatnik-inspired legend of the region with a gruff voice and a wild past. He’s vagabonded and train-hopped through the country, pissed off every fraternity on his college campus by publishing an op-ed arguing frat behavior perpetuated destructive masculinity and worked decades in the bar and music industry, holding positions from bouncer to manager.

“I’ve always enjoyed sticking it to the man,” Norris admitted.

If you talk to Norris, however, you’ll quickly notice his approachability, his warm compassion, his Buddha smile. You’ll also realize he’s open-minded to the changes. While he initially feared places like The Punch Bowl would upset the “flavor of the neighborhood,” which he described as “a spirit of radical independence,” Norris now sees Mutiny as a way to help open these new residents’ minds to what’s cool.

“Maybe they don’t know what’s cool yet,” Norris said. “That’s why they go to LoDo or weird places like that. With this population density, we have a real strong chance to build community and character here.”

Before Norris took over with his old buddy Matt Megyesi, Mutiny was owned by Jack Jenson, a long-haired guy wearing Buddy Holly glasses whom Norris described as “one of the first punk rock guys in Denver.” Norris, working as co-owner of 3 Kings Tavern down the road, would pop into Mutiny when he’d walk down Broadway to do his deposits and shoot the shit with Jenson. Though Jenson was “not very friendly,” preferring to open Mutiny at 11 a.m. and close at 4 p.m. “to make sure he wouldn’t have to deal with any customers at all,” that edginess appealed to Norris, and the two developed a close, trusting relationship centered around appreciation for culture, from Beat literature to local music.

“I told Jack when he was done, I’d take over,” Norris said. “I’d put on my Buddy Holly glasses, I’d grow my hair out, I’d flip everyone off, and I’d sit there and run it by myself forever.”

That opportunity came in a serendipitous moment about five years back. Norris, having been immersed in the bar industry for decades, had developed struggles with alcohol. While running 3 Kings Tavern, he’d hit a new low.

“I was walking back after getting out of jail, walking up the street to do my deposits. I was kicking rocks, man. I was feeling bad. It was the lowest I’ve probably been in my whole life. Then Jack waved me in and was like, ‘I’m done with this shit. Do you want it?’ And I’m like, ‘Fuck yeah I want it.’”

He called up Megyesi — they used to hop trains together and once collaborated on a zine called THE — and Megyesi jumped on board. They had little money, and Norris was looking at $20,000 in court costs. Unaffected, Jenson said, “We’ll work it out.”

“Jack bent over backwards to make sure we got this place cause he wanted it to go to the right people,” Norris recalled. “He’s an absolutely amazing man. We owe everything to Jack Jenson.”

The Mutiny Norris and Megyesi took over was far different than the pop-culture-infused Mutiny today. “It was all yellow and weird and gross,” Norris recalled. “The ceiling was terrible. It was barren and disgusting. We’ve dumped as much time and energy into it as we can, following all the stuff we love: classic books, records, comic books.” The sense of diversity, expression and appreciation for the past felt upon entering is a direct manifestation of the owners’ rich, open-minded personalities.

About a year after taking over from Jenson, Norris’ partners at 3 Kings bought him out. He poured the money into Mutiny, and with tremendous relief, his days in the bar industry were behind him. At the time of our interview, Norris hadn’t had a drink in 575 days.

On top of the coffee shop and store, Mutiny offers an ongoing lineup of interesting events, from magic shows to live podcasts to comedy sets to performances by local musicians — an event schedule can be found on its website. It stays open till 3 a.m. on weekends to give people a place to gather and sober up after nights out on the town. In fact, Mutiny is closed only 38 hours a week.

Before I headed out, I took a stroll through the aisles to see what caught my eye. I noticed an Elvis Presley cooking pan, a ‘60s radio perched on a shelf, a DVD of Secondhand Lions starring Haley Joel Osment, Madden 2004 on XBOX, a Rick and Morty poster, a V for Vendetta graphic novel, a dozen Japanese Transformers-esque figurines, a creepy smiling Pee Wee Herman doll, numerous Wolverine comics, a Martin Luther King revolutionist painting, a stack of MAD magazines, a jackrabbit busk, an Iron Maiden pinball machine, some multicolored one-hitters in a glass case, hundreds of old 45s, a trippy Breaking Bad Heisenberg portrait, a working photo booth, and a full-size carbonite-frozen Han Solo poster hanging on the bathroom door, so immediate I expected to hear Jabba the Hut guffawing nearby. I noticed all these things within about three minutes. And what I saw was but a drip in the Mutiny ocean, as much a reflection of myself as a reflection of the store. 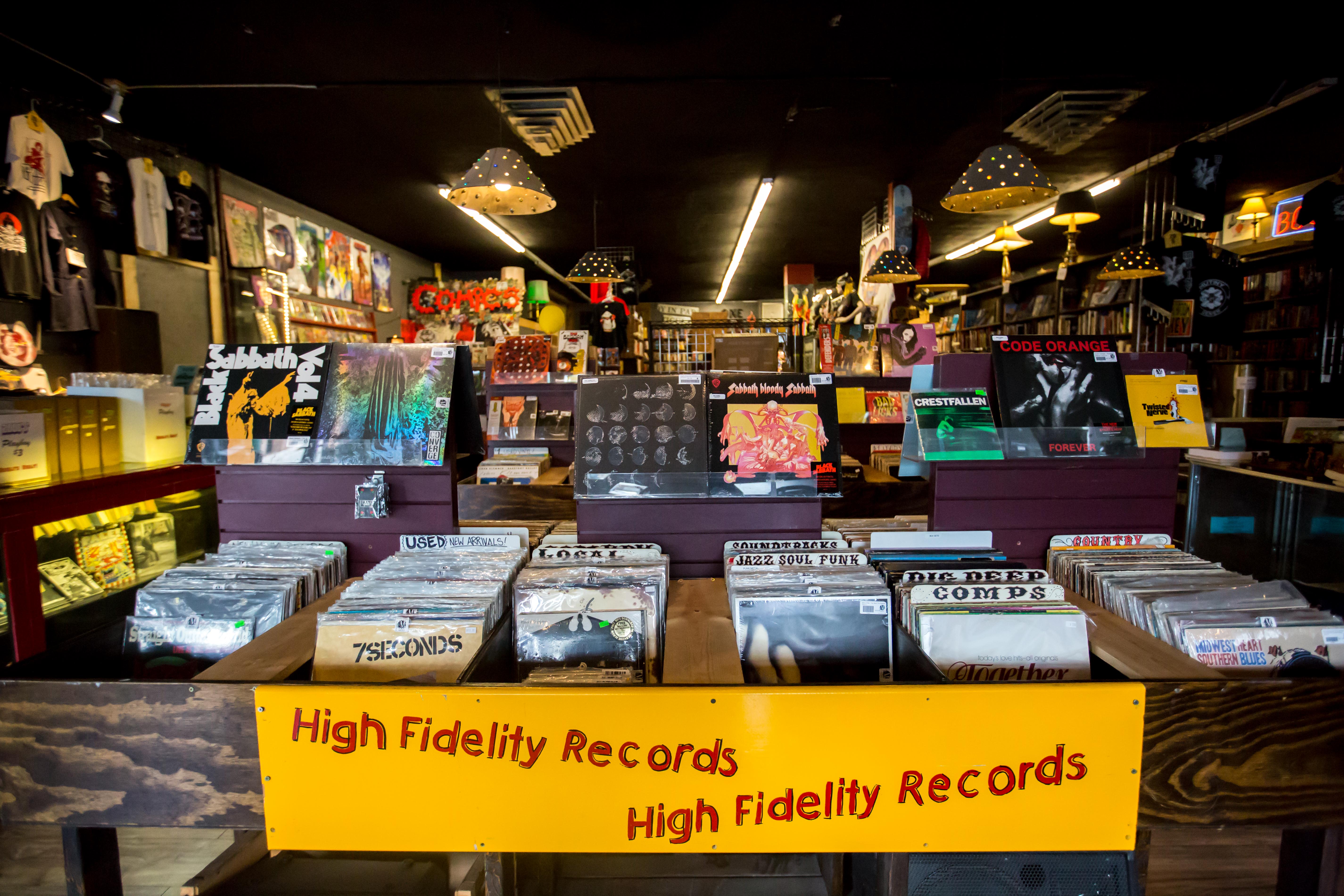 The last thing I noticed was a sign hanging over the doorway that reads, “Everybody Love Everybody.” In the end, it’s all about community.

“There’s a spiritual success in building a sense of community,” Norris said. “The more success we see, the more we want to give back. It’s just been an absolute joy doing this.”

I departed with a sense of the interconnectedness of things, an appreciation for how the past informs the present, how bygone days leave impressions through human expression, memorabilia and creativity, and how that process is ongoing, still unfolding in this wild and overwhelming present. In a time of apocalyptic political and environmental implications, it’s refreshing to experience the stream of ongoing history in a physical sense, for it places us in a broader context and allows us to breathe a sigh of appreciation for all the cool moments that have come to pass.

Regardless of how wild it gets, we’re all experiencing this vastness together. Mutiny offers a space for us to unite in celebration of what’s lasting, receptive to the past, expressive in the present, creating an optimistic future.