Throughout the past decade, Denver Fashion Week (DFW) has continually innovated and expanded the opportunities for local designers to showcase their work and this season is no exception. New for Spring ’19, Day One will feature exclusive collaborations between local designers and artists using materials donated by Colorado Fabrics and Meininger. Each pair was carefully selected by the DFW team based on each individual’s aesthetic. To give you a glimpse of the transformative show that awaits, 303 Magazine asked a few of the pairs to answer the same question, making the developing synergy between the pairs even clearer. 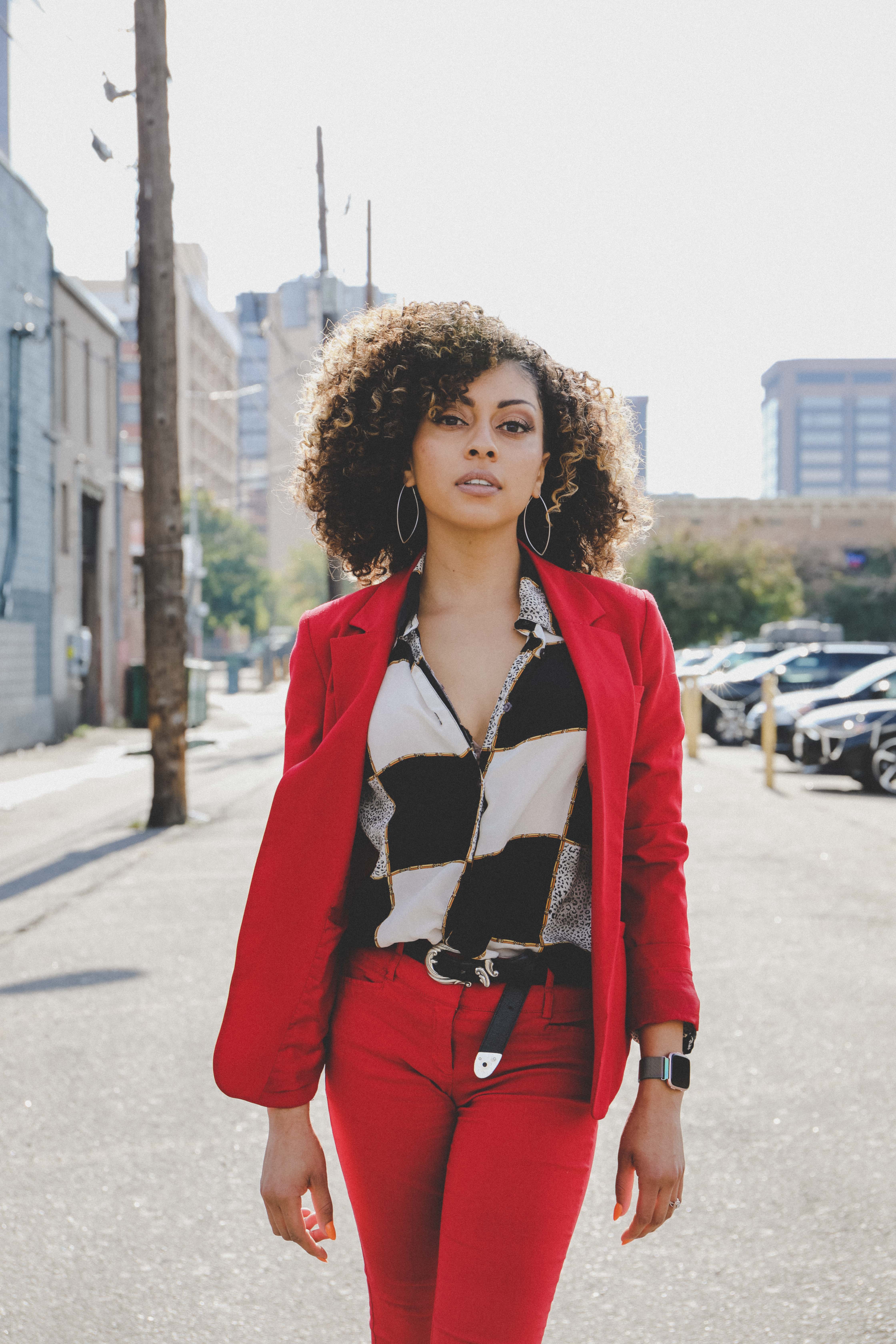 Colorado native, Felicia Benavidez, made her debut on the DFW runway for the Fall ‘18 season, bringing vibrant color palettes and modern pieces to the catwalk. Under the tutelage of her mother — who used to sew and design clothing — Benavidez learned the craft and developed her own line called A Vintage Frame of Mind (VFM) — a streetwear brand inspired by significant eras in fashion, such as the disco era of the ‘70s. As for her company’s ethos, it’s all in the name.

“‘V’ is for values that come from the vintage era. ‘F’ is for the frame that we lace with fashion. ‘M’ is for the morals that have been instilled into your mind. A Vintage Frame of Mind is a lifestyle. It’s the way you carry yourself, the morals and values that you live by, which influences how you dress and [how you] live your life,” Benavidez explained.

303: If you could have dinner with one famous person from history, who would it be and why?

FB: This was tough, as there are a few people from history I would love to have dinner with. However, I have to go with the first person that came to mind, and that’s Oprah Winfrey. Oprah is the epitome of making something out of nothing and that’s what I admire the most. She faced so much adversity beginning from birth but overcame it all and still came out on top.

Being a self-taught designer, it definitely gets tough sometimes as I can feel like I don’t have the advantages others have. But looking up to women such as Oprah, I know I can do anything that I put enough focus, dedication and effort into. Because Oprah is such a boss, I would have to come to dinner dressed like a boss myself. I’m thinking I would wear a pink pantsuit with a printed button-up blouse and a bold pump. Of course, I’d rock my natural curly afro, minimal makeup and simple accessories such stud earrings and a vintage clutch. 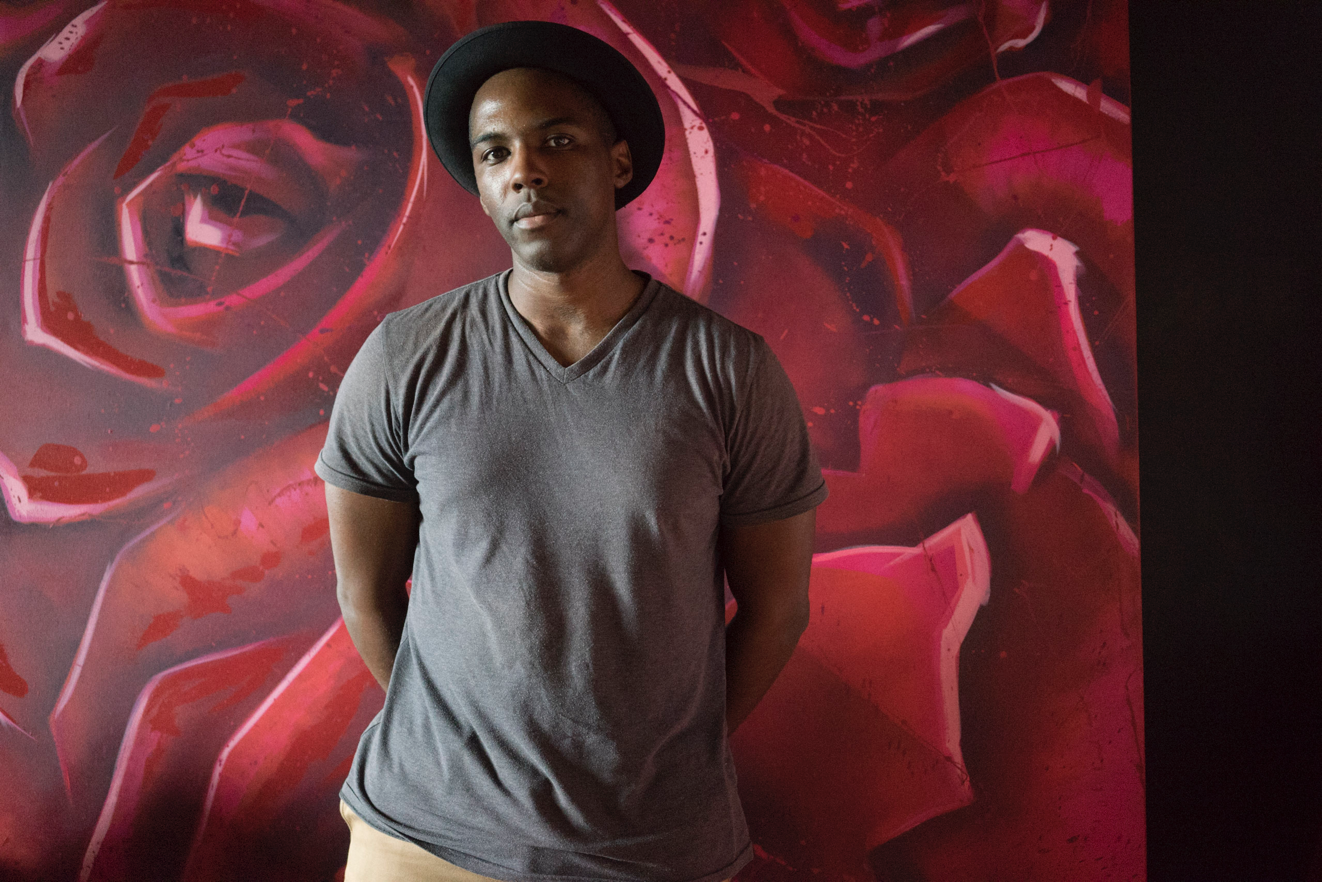 Better known by the moniker Detour, artist Thomas Evans started working with portraiture and painting only after he made a name for himself as a breakdancer. Once he started his path into the visual arts, there was no turning back because his paintings were and continue to be a hit. His style pivots around the use of bright, strong color palettes with gestural strokes — verging on abstraction. From adorning the walls of the RiNo haunt Meadowlark Kitchen, to repeatedly painting the garage bay of Nocturne, to completing commissioned portraits for the likes of Jay-Z and alumni Nuggets players, Detour can be found all over Denver (and if you ask us, soon it will be all over the world).

303: If you could have dinner with one famous person from history, who would it be and why?

Detour: If I could have dinner with one famous person in history it would have to be Leonardo DaVinci. I would definitely want to figure out why he was so ahead of time. I just want to soak up his process and philosophy and figure out how to play today. 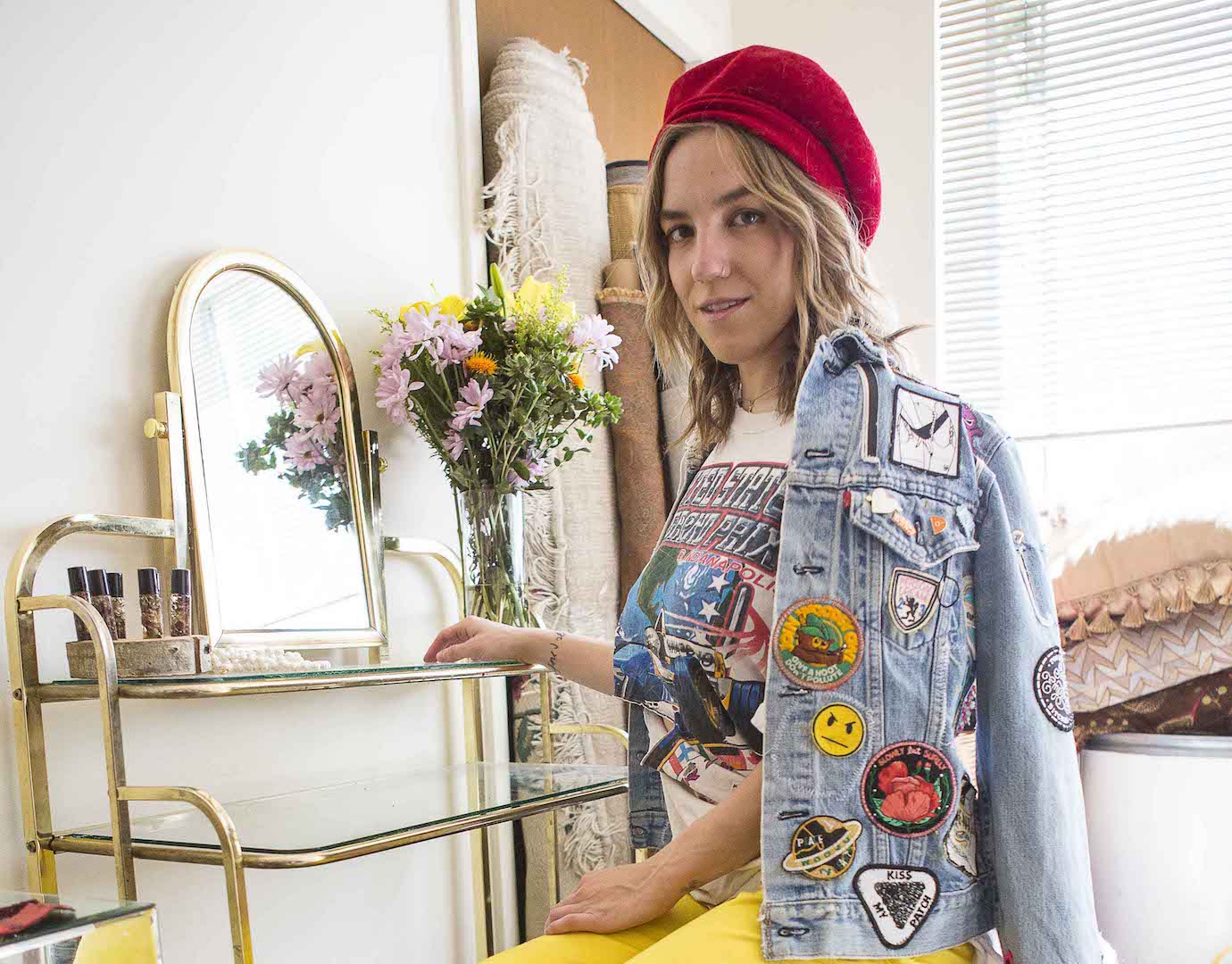 Designer Madelyn Hadel is best known for patchwork denim jackets she upcycles from thrifted or donated clothing — although she recently expanded to a full line of clothing — the result of which is casual cool, edgy, retro-inspired garments that are part of her brand called Rebellelion. “Rebelle” as in a rebellious French girl and “lion” as in her inner strength. Her designs are not only one-of-a-kind, femme-centric streetwear — novel in itself — but also affordable.

303: How do you translate ideas into textiles/3D format?

MH: I’ve honestly always felt that working through an idea is easier in 3D than it is just in my mind because it is something tangible that I can manipulate with my hands. I’m a very tactile person so I love that fashion and textile design allows me the freedom to experiment with ideas as I piece them together with actual materials instead of trying to conceptualize something before I can actually see it in front of me. I’m very drawn to upcycling which has the advantage of offering me a starting point with a garment that already exists and my only task is figuring out a way to transform it into something fresh. 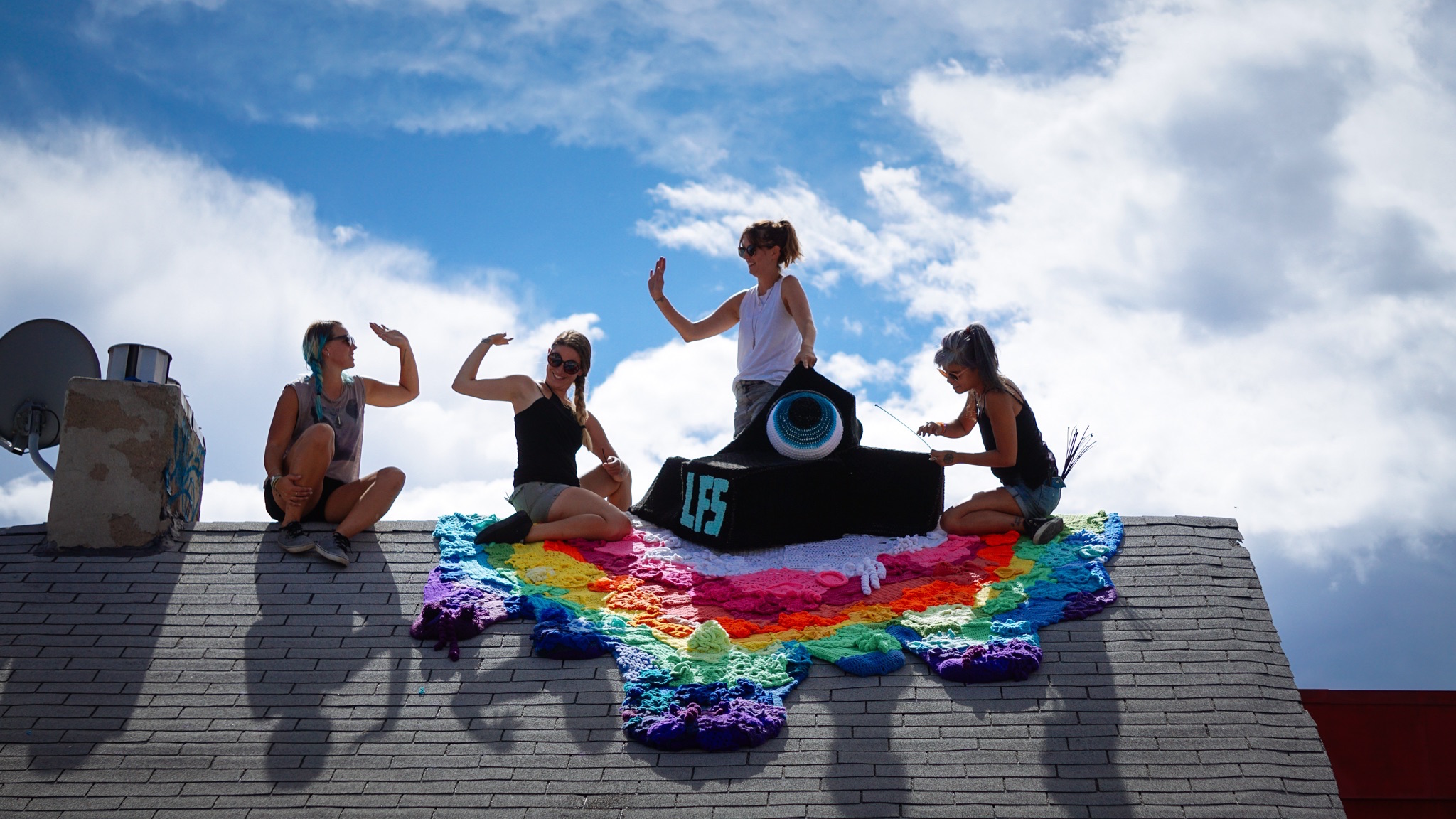 The Ladies installing “Eye Love You So Much” in RiNo. Photo by Ladies Fancywork Society

Lauren Seip, Jessica Eaton, Jesse Dawson and Tymla Welch are the four free-spirited women who make up Ladies Fancywork Society. Since 2007, the Ladies have been yarm-bombing different parts of Denver including the Dancers sculptures at the Denver Performing Arts Complex, a tree inside Kachina Cantina at Dairy Block and several years of CRUSH installations in RiNo. What started as a rogue hobby has now become a full-time gig, where the Ladies’ creations out of yarn and other textiles take months to conceptualize and fabricate. It’s still just the four of them, having a blast with every stitch, pushing the boundaries of crochet in every way possible.

303: How do you translate ideas into textiles/3D format?

LFS: As sculptural fiber artists, this is already our starting point! Our visions are textile and 3D first and we figure out the execution once the necessary pieces are in place. It’s almost like we don’t have control and our pieces tell us what they are going to be! 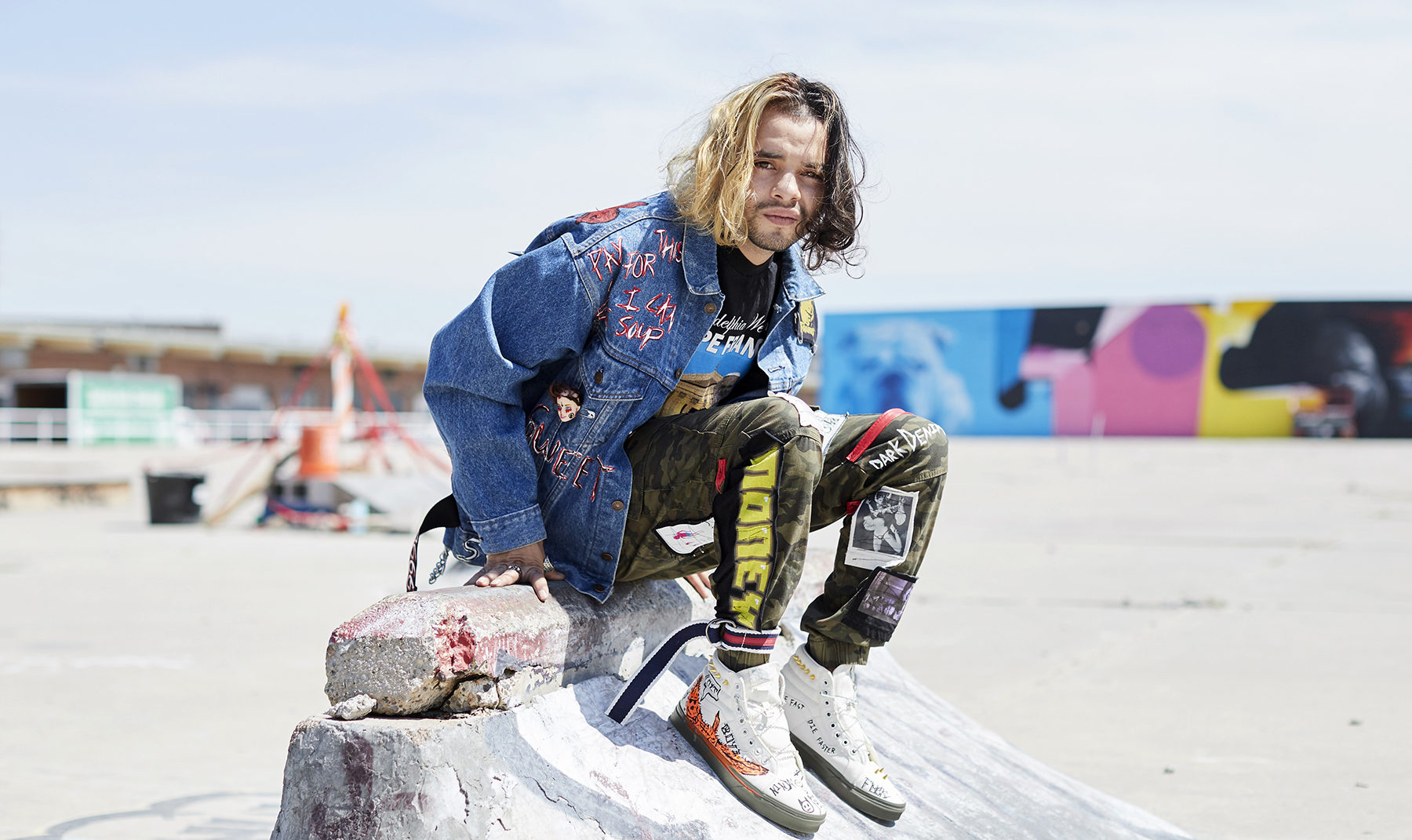 Local designer, AldoElCreator is an interesting collision of charisma and mystery, friendly with unexplainable darkness. His clothing line, DarkDenim — or “The MoshPit” as he describes it — is gothic, Burtonesque streetwear where Gucci and Louis Vuitton live comfortably with Winnie the Pooh and Beavis and Butthead. His hand-painted, handsewn, upcycled designs combine pop culture references, rebellious messaging and artwork in a way that appeals to a wide variety of people, making him one to watch in Denver’s fashion future.

303: What is your favorite pop culture reference or character? And why?

Aldo: Edward Scissorhands is one of my favorite characters because he is just that weird one in the movie who no one really wants anything to do with but when they find out his ability they completely treat him differently. This is kinda how this whole thing has been for me. Everyone thinks I’m super weird yet they meet me and they actually see past my tattoos, chains and baggy patched-up jeans and see the things I’m able to come up with. 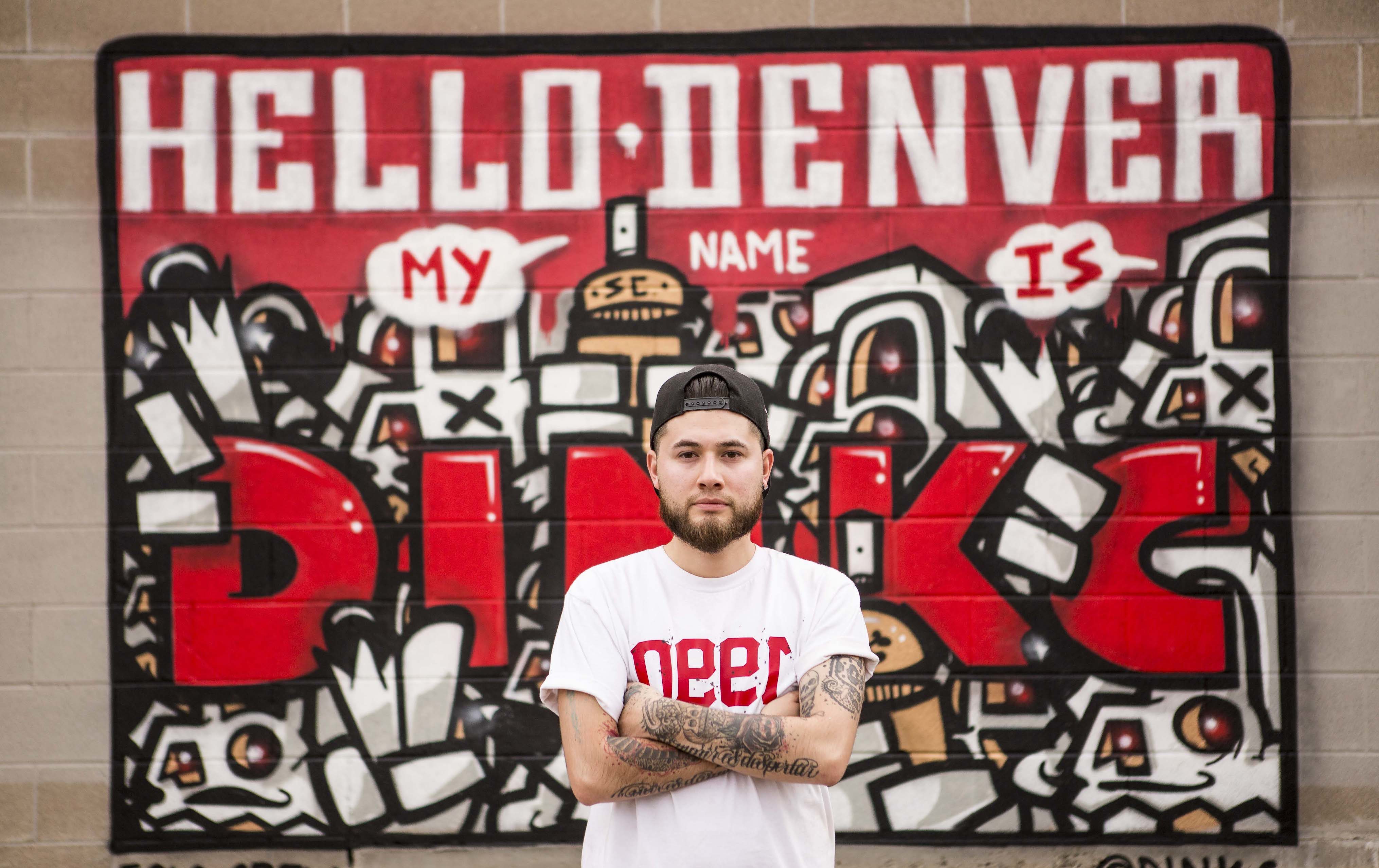 DINKC (pronounced “Dink”) moved to Denver a few years ago and quickly earned his spot in the art scene — both in the streets and in galleries. Not only is he a visual artist, illustrator and spray painter, he also customizes toys, sneakers, clothes, skateboards, stickers, masks and other merchandise. All of those fall within the umbrella of branding that the Kansas City-born artist has carefully crafted for himself. His style is so distinctly his own — with a repeated character inspired by a childhood cartoon and specific color choices that reflect his Mexican heritage. Anything that comes out of his studio is admirably polished, with thick black lines and a graphic design-influenced aesthetic.

303: What is your favorite pop culture reference or character? And why?

DINKC: I grew up on Disney and Mickey was by far one of my favorites. I was instantly drawn to his simple character design, everyday adventures, and funny exaggeration. Later on, I became obsessed with his overall iconic branding. His face was everywhere and easily recognizable, you would see him and know exactly what he stood for. I enjoyed learning about how he came to be after Walt Disney had taken a blow in his career and lost a lot of his first original characters. Yet, from losing that he was able to create something new and meaningful that blew up to be something amazing! It’s said Mickey came to be on a cross country train ride just as he arrived in Kansas City, which I always thought was pretty cool. It all started with an idea, then a sketch, and a lot of hard work after. But it speaks to what could be if we just go for what we believe in by putting in that time and dedication. I’ve always been inspired by Mickey and the origin stories of other similar characters. I can only hope to one day reach those kinds of heights with my own “Skull Character,” but for now I’ll just keep on refining him till he makes it.