Collab Fest Continues To Blur The Lines of Beer

Collaboration Fest celebrated its sixth anniversary this year and its second year holding the event at the Hyatt Regency Denver. This boundary-pushing beer fest is hosted by Two Parts and the Colorado Brewers Guild and features over 100 unique beers made when 200 brewers get together to see just how far they can blur the lines of traditional and not-so-traditional beer styles. The only rule? At least one of the brewers has to be a member of the Colorado Brewers Guild. After that, it’s all about getting weird with beer.

Every year we try to come up with a plan. It’s the only way to maximize four hours with 100 beers. In the past, we’ve picked beers by names or styles but this year we went through the festival based on the brewery. It created more adventure and led us to beers we might not have otherwise put on our list, most of the time we didn’t know what we were going to sip on until it was poured into our glass. There is no better example of this than our pour of Malt Liquor, the collaboration between Dry Dock Brewing and Steamworks Brewing Company. It’s been a while since we’ve had any malt liquor and it was never this flavorful. It was old school done right.

Even while we wandered from booth to booth and pour to pour there were a few trends that showed out. 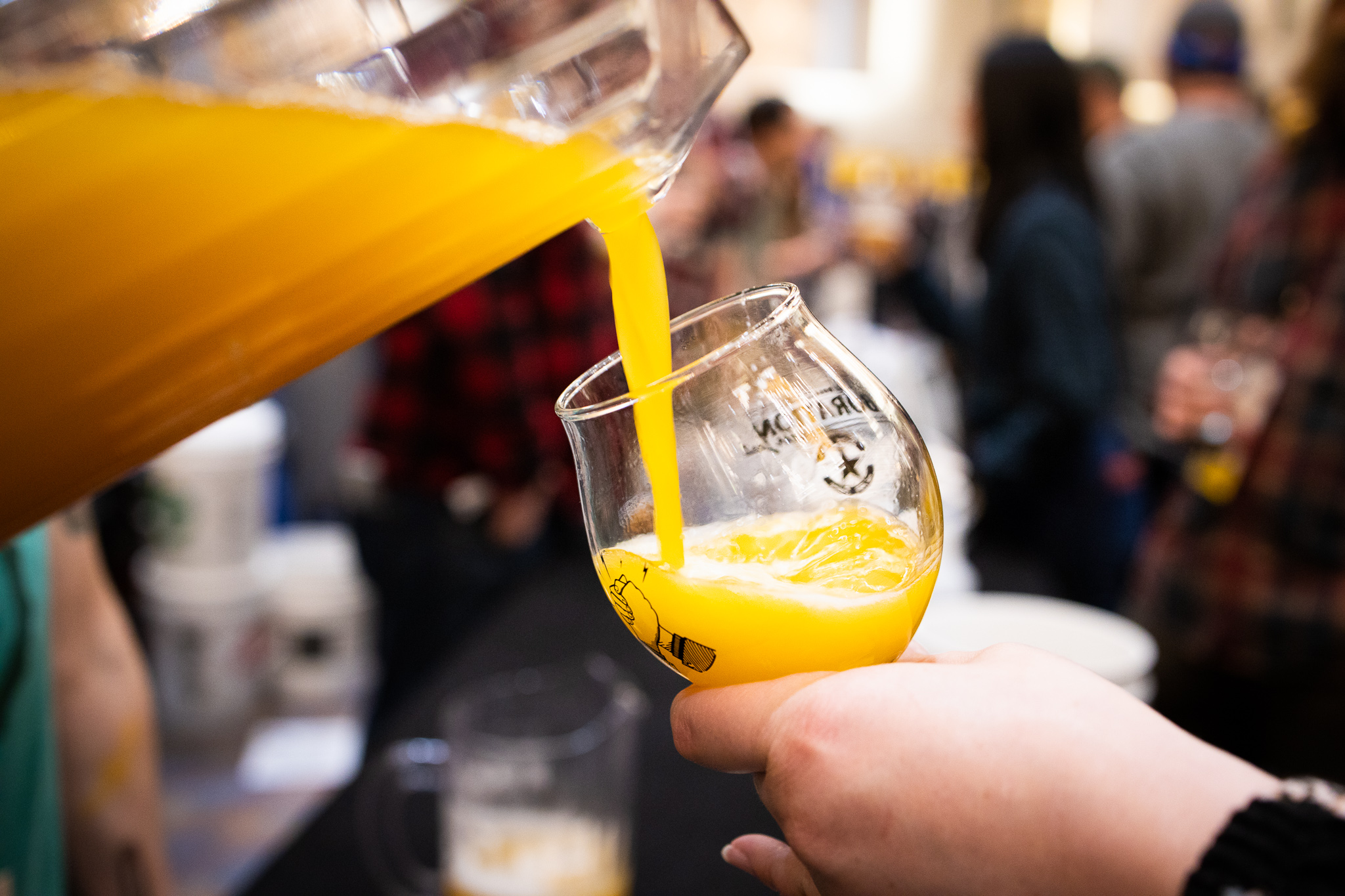 The New England style IPA (sometimes called the Hazy IPA) was everywhere.  In a festival generally known for its immense variety, there was almost an overabundance of this style. That isn’t a knock. It’s one of the most popular styles in the industry right now, but it was surprising that so many breweries went that direction during a festival known for its creativity.

There were a few standouts that had the crowd buzzing. The line for the Outer Range and Casey Brewing collaboration Mr. H. Nelson was consistent. It was a juicy brew featuring the Nelson Sauvin hop that had a touch of bitterness. The Juice Loop from Fiction Beer Company and Wiley Roots Brewing showcased experimental hops that made hints of lemon downright luscious. Further down the row was Trade Secrets from Cerebral Brewing and WeldWerks Brewing, a double IPA that was creamy, smooth and gave you something extra in its use of the Nelson Sauvin hop. 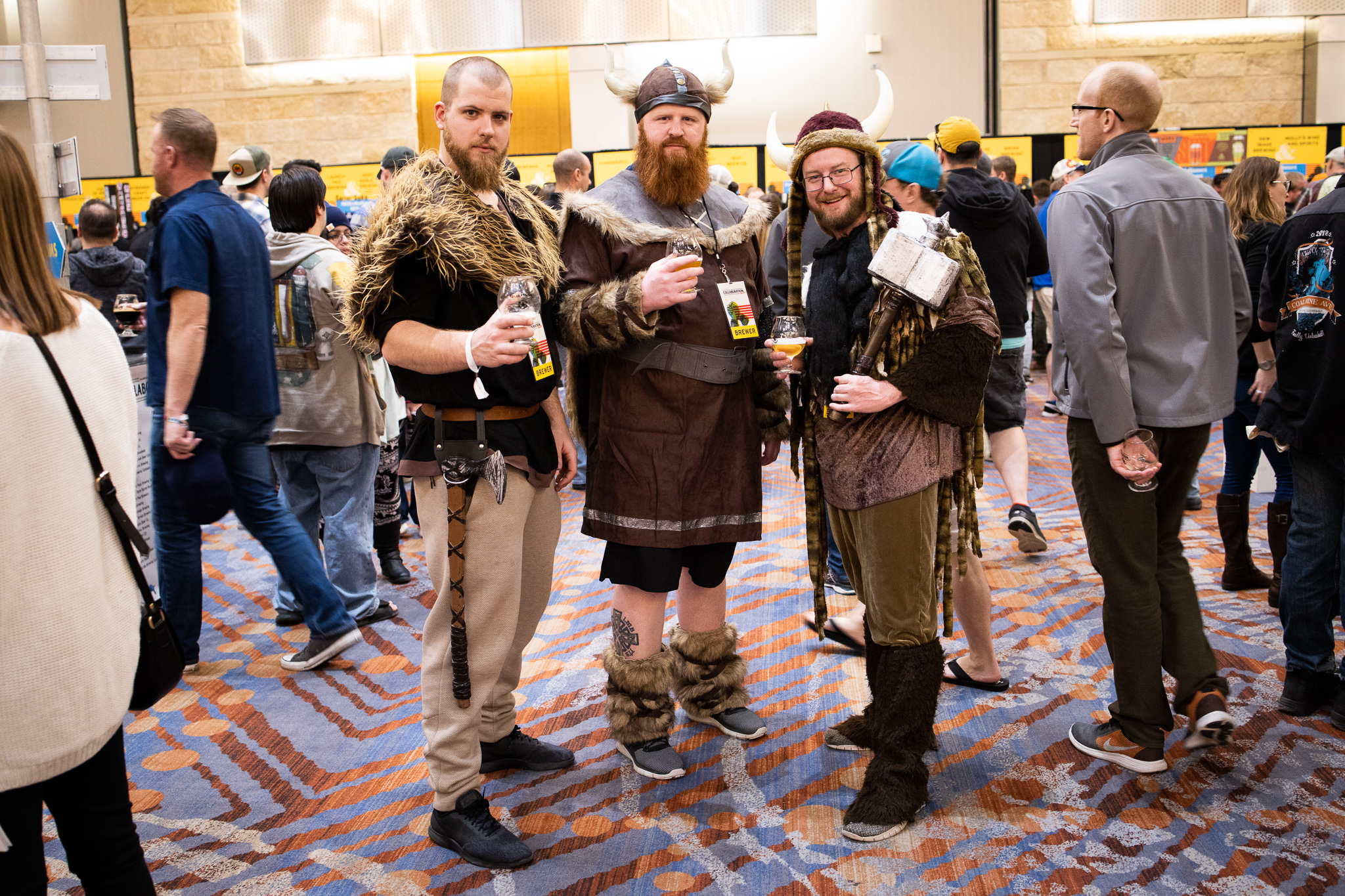 There were also some breweries who explored just what it meant to be a hazy IPA. The tart milkshake IPA with rose petals and coriander by Denver Beer Company and Dangerous Man Brewing was an experience for all your senses. Even in a strong, tart IPA, the coriander blended well and the rose petal asserted itself. Funkwerks and Jessup Farm Barrel House partnered for their juicy IPA but added in chocolate — yes, a chocolate juicy IPA. It was the beer equivalent to getting your IPA cake and eating it too.

The other New England-style IPA that truly stood out was Pillaged Village from Lost Cabin Beer Company and Copper Kettle Brewing. This Imperial New England IPA had the hops you might expect with varieties of Hallertau but it was the yeast that gave a unique mouthfeel and finish to the beer. It was fermented with Norwegian “Kviek” yeast. Also, let’s not forget to mention that the people pouring the beers were rocking full Viking costumes, or in our case, the full bear suit. The beer and the booth were one hell of an experience. 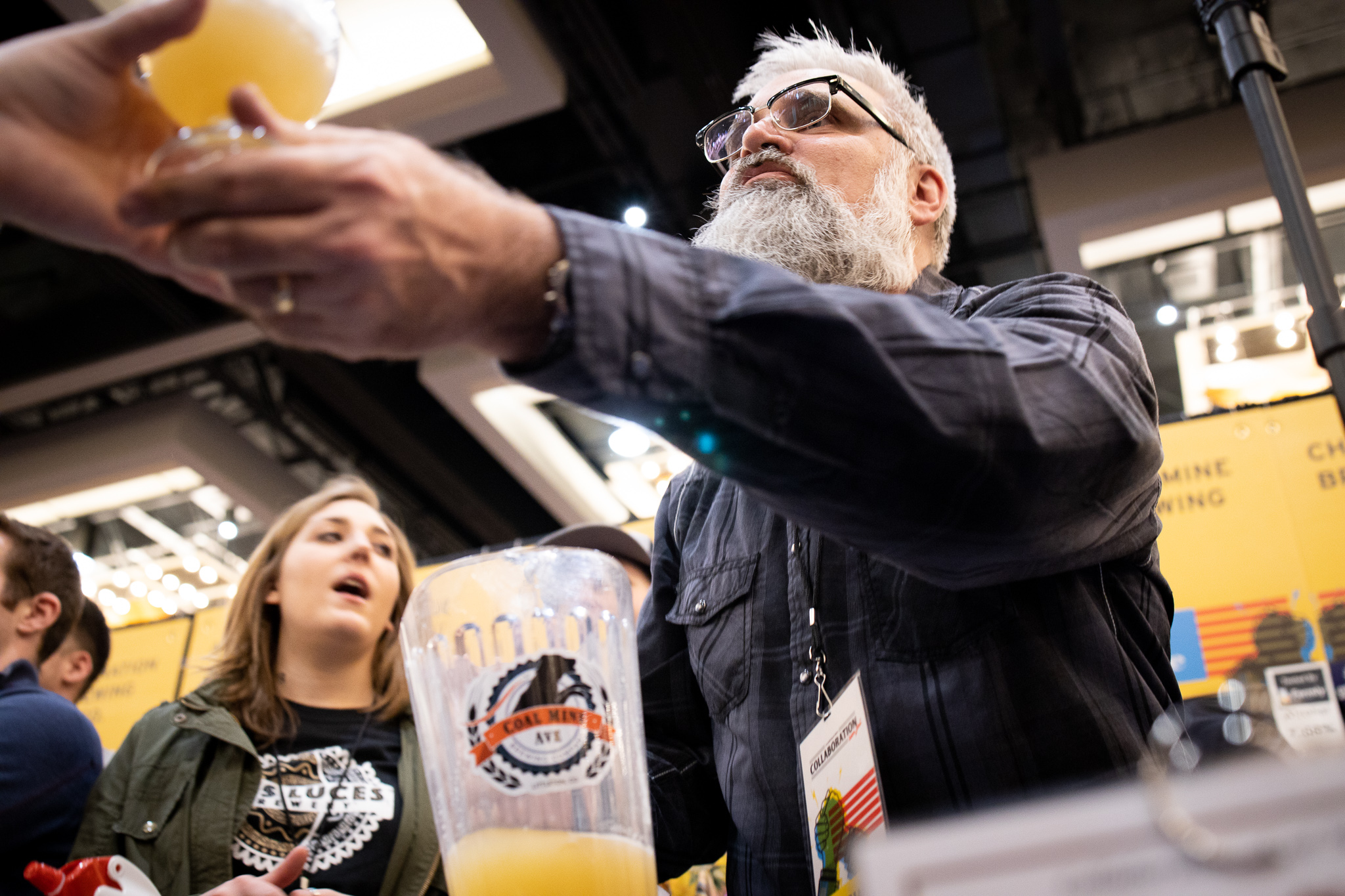 The best and worst part of Collab Fest is trying one-of-a-kind beers that you might never get to try again. It’s also fun to be a part of the collaborative spirit when two, or in some cases, many more breweries get together. No beer showcased that better than the Mushroom Schwarzbier. The RiNo district collaboration included Crooked Stave Artisan Beer Project, Mockery Brewing, Great Divide, Black Shirt Brewing, Epic Brewing, 14er Brewing, River North Brewery and Our Mutual Friend. Nine different breweries created something that shouldn’t be possible. Together they brewed a traditional Schwarzbier — an easy drinking dark lager — made sweeter and earthy with the use of mushroom.

Goats and Goats and Goats was the dual collaboration project from Goat Patch Brewing and Gilded Goat Brewing Company which featured, as it should, the two breweries using hops from Billy Goat Hop Farm in Montrose. Both breweries start the process with the same grain, hops, use of jasmine and rose hip herbs but each finished in fermentation differently. Goat Patch went the saison route while Gilded Goat went the sour route. The side by side was delightful. It was great to experience how two beers can start so similarly and end up with well-defined differences in the end. 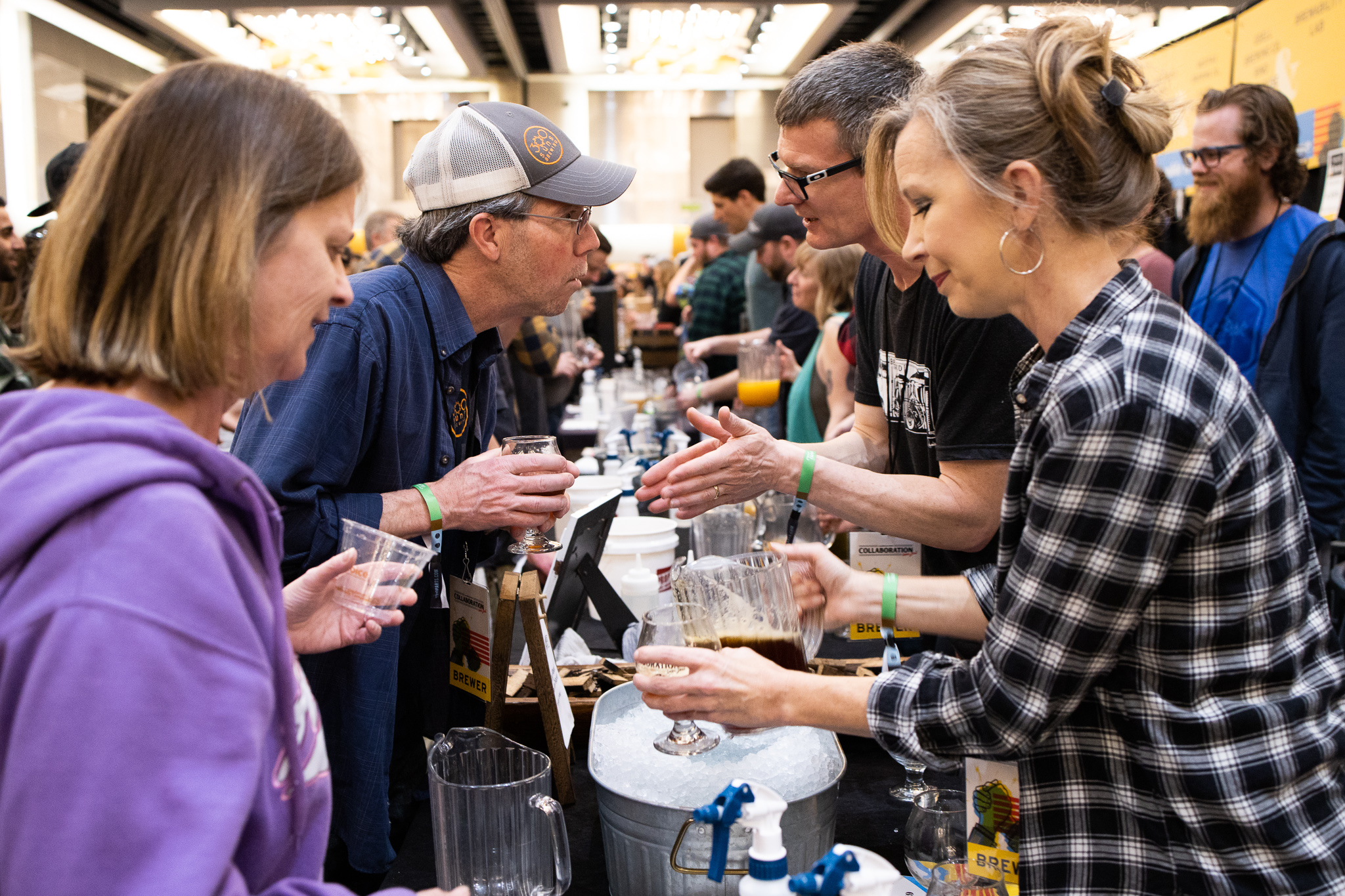 Walking around the festival, something caught our eye in the main hall: people were walking around with salt rims on their glasses. Immediately the hunt for the margarita was on. What we found was an Imperial Margarita Gose with fresh cilantro, fresh limes, fresh jalapeños and sea salt from Seedstock Brewery and Coal Mine Brewing. Tart, a bit spicy and well-balanced with the salt, it showed just what a gose can be when you get creative.

Stone fruit was abundant at the fest as well. The un-carbonated collaboration between Primitive Beer and Liquid Mechanics Brewing showcased the Methode Traditionnelle style of funk which was highlighted with the re-fermentation on Nectarines. Then there was an unexpected English Mild brewed by Elevation Beer Company and Iron Bird Brewing. This beer came in a just under 4% ABV and was brewed with peaches and black tea. It was quite simply the most crushable, refreshing beer we had at the festival with the tea and peach blending but not overpowering the beer itself.

In beer, styles and the definition of what it means to be a beer are constantly expanding and being challenged. It is what makes craft beer special, as the only boundaries are the ones the brewers impose on themselves. Collaboration Fest, year after year, encourages community and creativity. If you couldn’t make it, check your local brewery to see if they still have some of the collaboration brews on top. If not, there is always next year, and we have no doubt next year will continue the tradition. 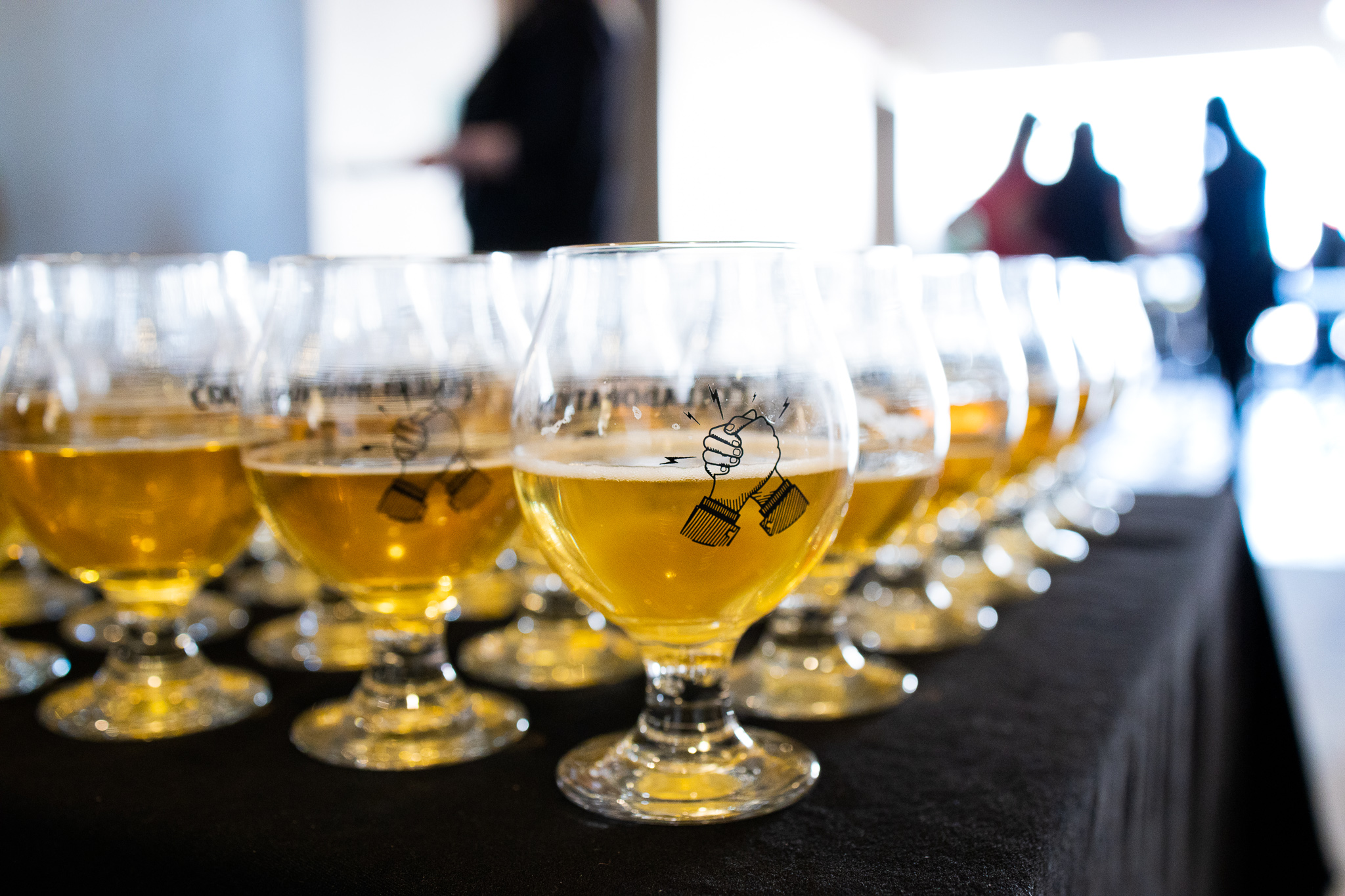