We’ll be honest — rappelling into a deep box canyon and spidering up frozen icy waterfalls using nothing but some ropes, a couple picks and some crampons is not for everyone. But — if you’re an adrenaline junkie looking for the next high after rock climbing or a regular, somewhat outdoorsy individual looking for a once-in-a-lifetime experience to brag home about, a visit to the Ouray Ice Park in Ouray, Colorado might just be worth the drive south.

Ouray — a charming western mountain town a short drive from Telluride — is nicknamed the “The Switzerland of America.” Based on the ice climbing alone, we’d have to agree. This isn’t Interlaken — no — but some of the best ice climbers in the world make the trip here to participate in the Ouray Ice Festival held each January, so naturally, 303 had to check it out. 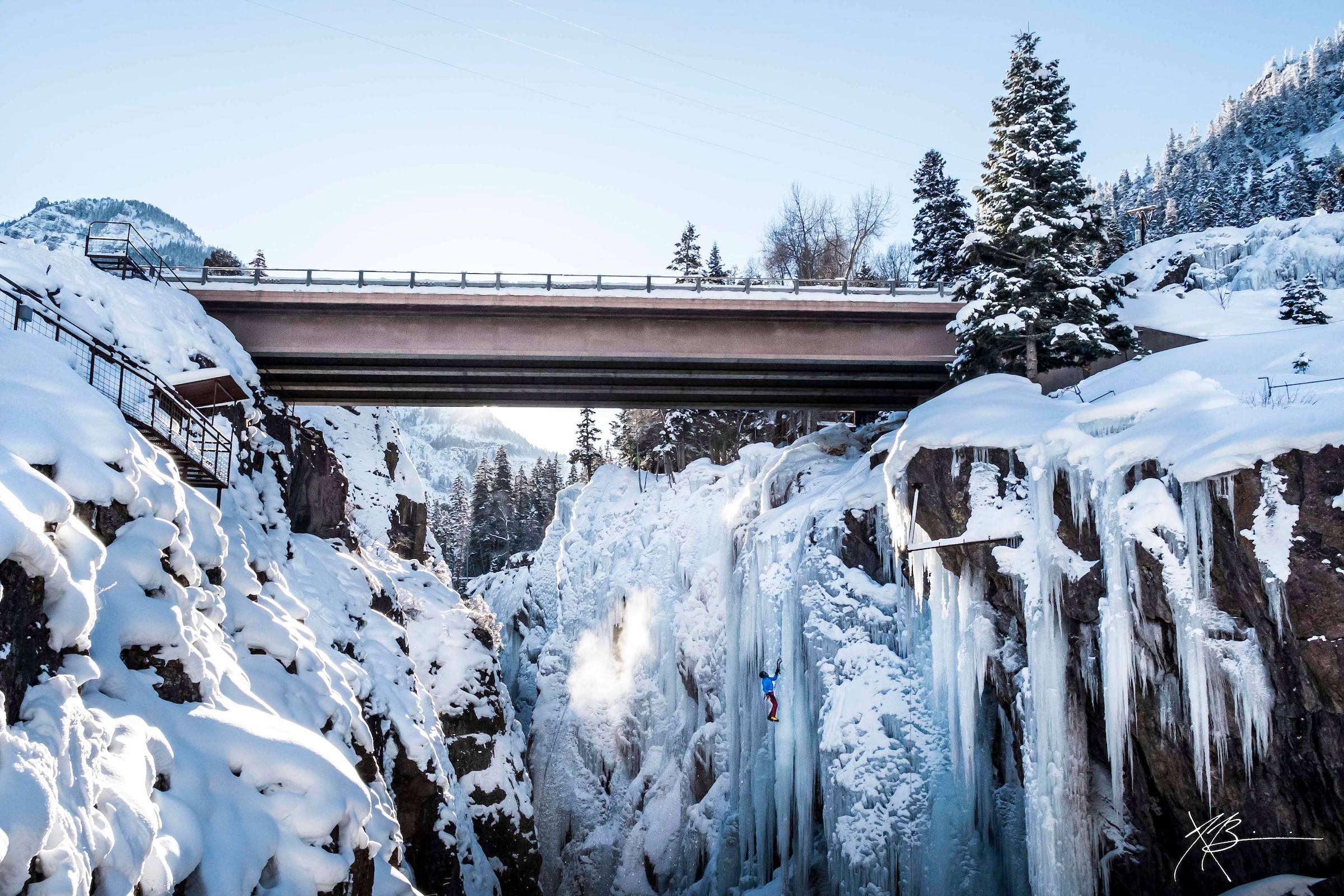 Typically open from mid to late December through mid-March, the Ouray Ice Park is completely free to use as long as you wear a helmet and crampons inside the park, but if you’re an inexperienced ice climber, you should probably hire a guide and take a lesson first. There are two Ouray-based ice climbing guide services — Peak Mountain Guides and San Juan Mountain Guides, but you can find the official list of permitted guide services here that includes visiting guide companies.

Dan Zokaites, one of the head guides at Peak Mountain Guides and certified by the International Federation of Mountain Guides Associations, has been ice climbing for almost 10 years and is allowed to instruct ice climbing in 22 countries across the globe, so obviously we trusted him to teach us. According to the Virginia native, ice climbing wasn’t always around in Ouray — in fact, it’s still considered a relatively new sport that began to popularize in the ‘80s and early ‘90s. The Ouray Ice Park didn’t even officially open until 1997 although people were climbing in the Uncompahgre Gorge long before then. The wave of fascination with the area has compelled many climbers to take the trip — or make the move to the mountain town — Zokaites himself included. Zokaites also claims that back then, the sport was a little more dangerous.

“[In Ouray,] There was a couple of local ice climbers and ice climbing was this really obscure thing. Nobody did it. It was hard to get gear for it. People were making their own equipment,” he said.

The equipment isn’t much different from basic rock climbing—consisting of harnesses and ropes, but crampons and ice picks are essentially what makes the sport a bit different. 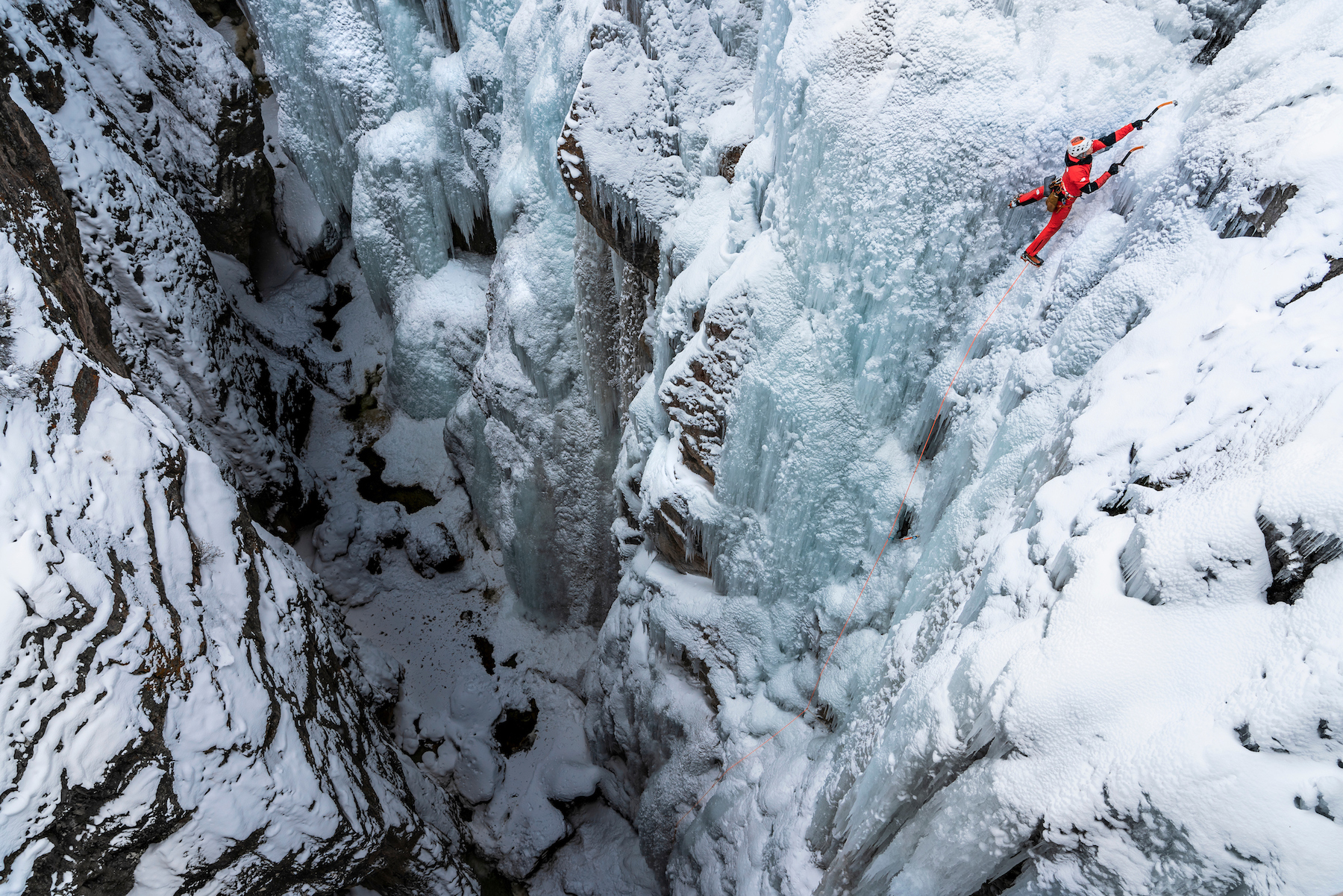 As for the terrain, apparently Uncompahgre Gorge only has two or maybe three natural ice climbing routes in the box canyon. The rest of which is completely manmade. The manmade ice climbing began in the early ‘80s when a mountaineer named James Burwick saw an 80-foot icicle dripping out of a leaky water pipe in the gorge and invited a couple friends to climb it with him. They “accidentally” poked a few more holes in the pipe and thus, the ice park was unofficially conceived. After trying to prevent climbers from “farming” ice, the town founded Ouray Ice Park, Inc. so that future climbers could legally enjoy the area and sport.

Today, visitors in Ouray Ice Park have more than 200 official named ice climbing routes to choose from ranging in difficulty. They even have a learning area for beginners. According to Zokaites, the diversity of the climbs in the park is what makes it world famous. “What we have is a very large abundance of climbs, so if we’re teaching somebody how to climb, we can come into the ice park and climb for a couple days in the ice park and they never have to climb the same route twice,” he said.

“We have lots of options and that holds true for both beginners and experts. There’s a lot of really hard climbs in the ice park as well, and so Peak Mountain Guides will take people of varying ability from ‘never-evers’ to really good climbers who have been climbing for years and we can give them feedback on climbs, movement skills, anchor setups and hone their climbing experiences,” he added.

Zokaites says that if that all sounds intimidating, ice climbing is still for you. He loves to teach beginners and wants people who dislike rock climbing or love rock climbing to know that the two sports are similar yet very different. If you’re already an experienced climber of some sort, you definitely will have an advantage, but that doesn’t mean you’ll be a pro. 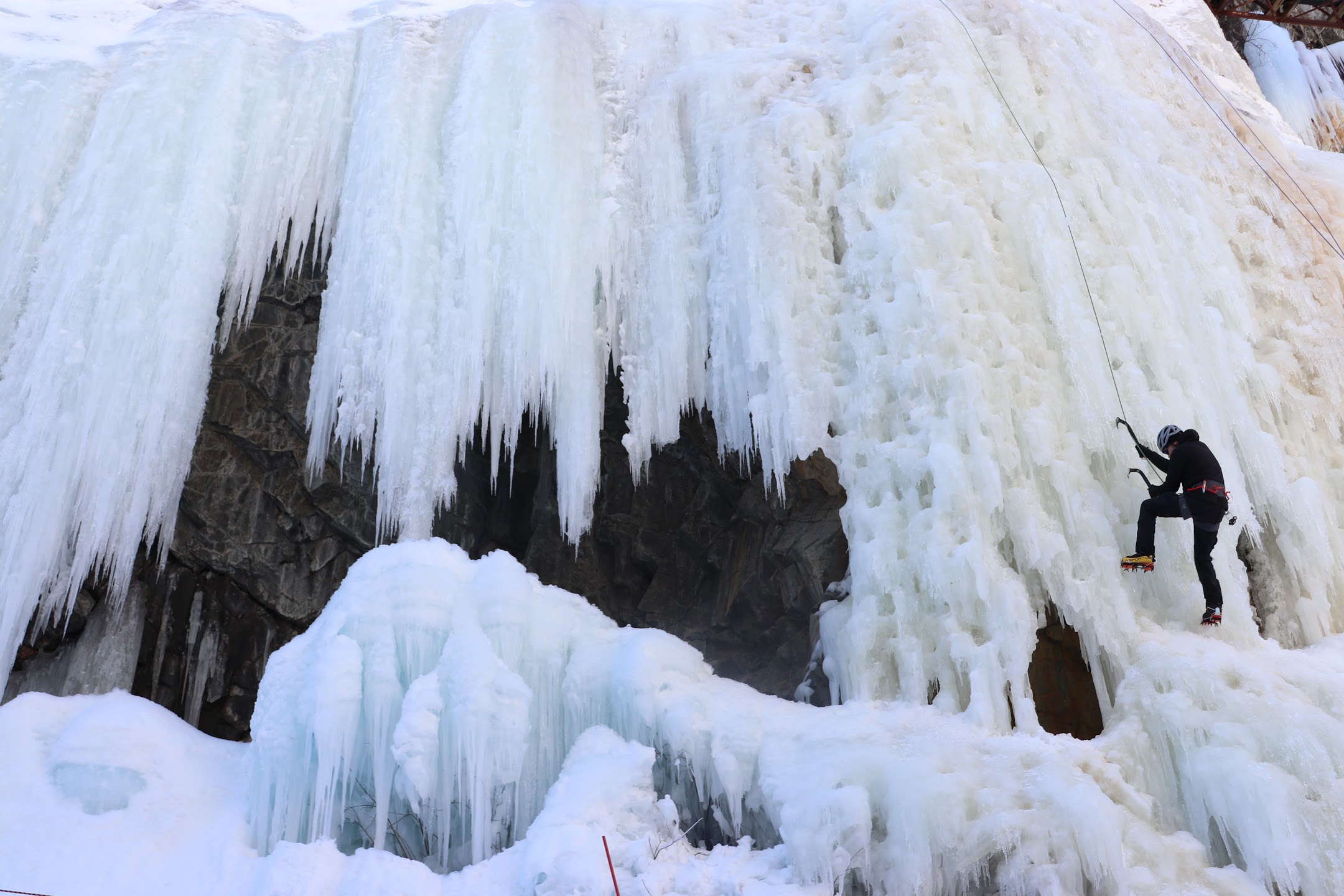 Like any sport though, ice climbing can be incredibly dangerous if you don’t know what you’re doing. But if you double-check your knots and gear and make sure you’re aware of fellow climbers and your surroundings, it should be safe. If you’re worried about falling, Zokaites confirms that no anchors are attached to the ice. They are only bolted to trees or rock, and most climbers in the park use a top-roping protection system to ensure that a partner is belaying you safely and you have backup support in case you fall.

Inevitably, there have been accidents inside the Ouray Ice Park — mainly because there are no requirements or checkpoints to climb and the park is not liable for any hazardous climbing or behavior inside the gorge. Experienced climbers or beginners who go with a guide stay relatively safe though.

“There are hazards that have to get managed, but everyone’s pretty cognizant of that for the most part,” Zokaites said.“It is a free resource for anybody to come and use as they wish, but we really encourage people to be safe. If you don’t know what you’re doing, please hire a guide.”

It’s definitely worth the experience though. There are many reasons to visit Ouray, but Zokaites says that ice climbing is gratifying in a lot of ways.

“If you’re an experienced climber, it’s something new, but I think everyone should give it a try because it’s unique,” Zokaites explained. “We’re literally kicking little metal points into the ice and standing on them and trusting them, and there’s this huge challenge and reward aspect. Can I climb this? Am I good enough to climb this? Is it going to be too hard? And then the reward of ‘Hey I made it to the top. I did this.’ It’s a big confidence booster. It’s not like anything else we’re doing in our daily lives.” 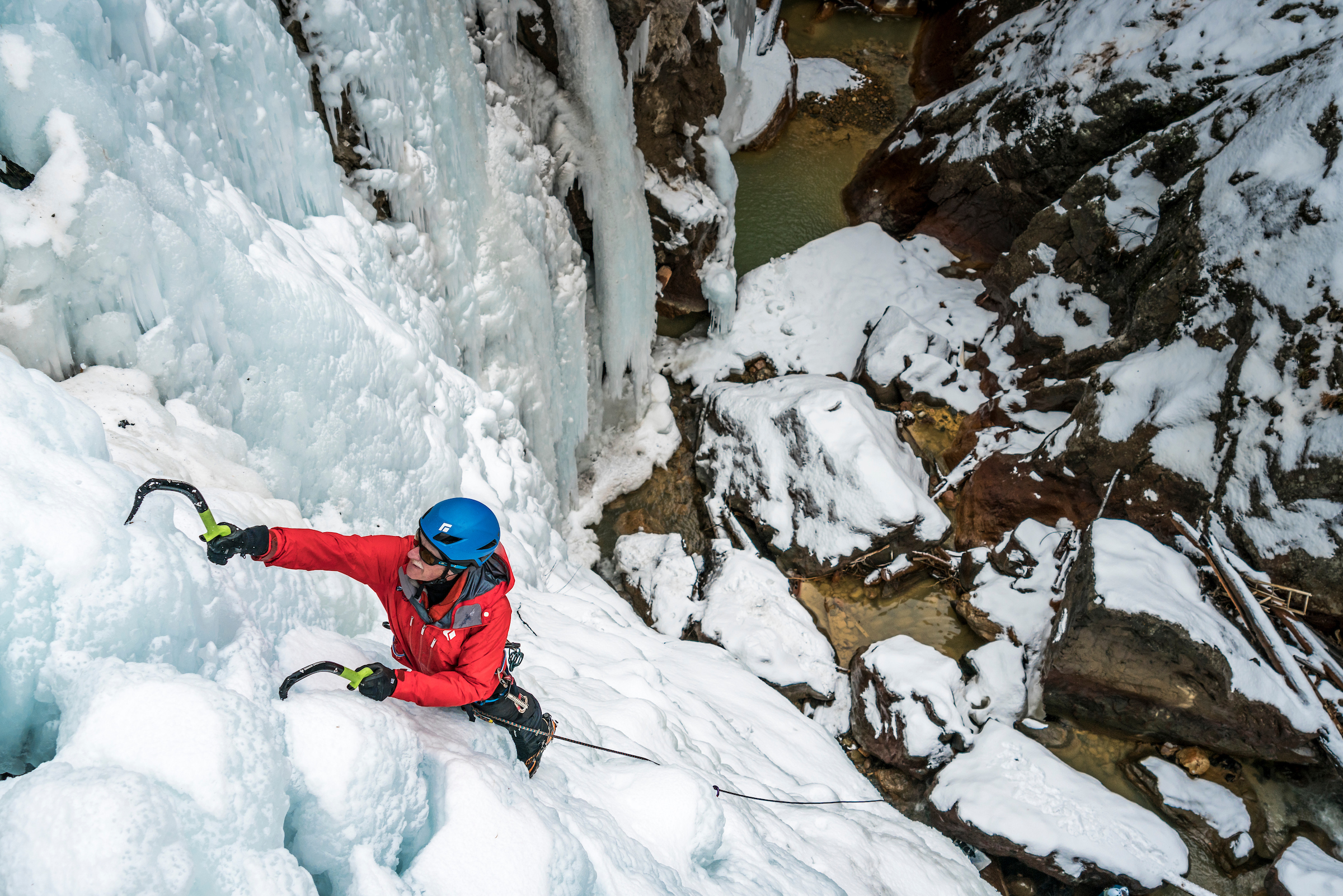