A Look at the DCPA’s Stunning Costuming For Anna Karenina

Jacqueline Kennedy Onassis mystified an entire generation of women as American royalty with polished, effortless — albeit extremely expensive — style. Today, Hollywood celebrities hold court as they strut down the Red Carpet during award season in couture the middle class can only dream about. Fashion has been a sign of wealth, status and social significance for centuries, as is evident in the recent production of Anna Karenina at the Denver Center for the Performing Arts (DCPA). 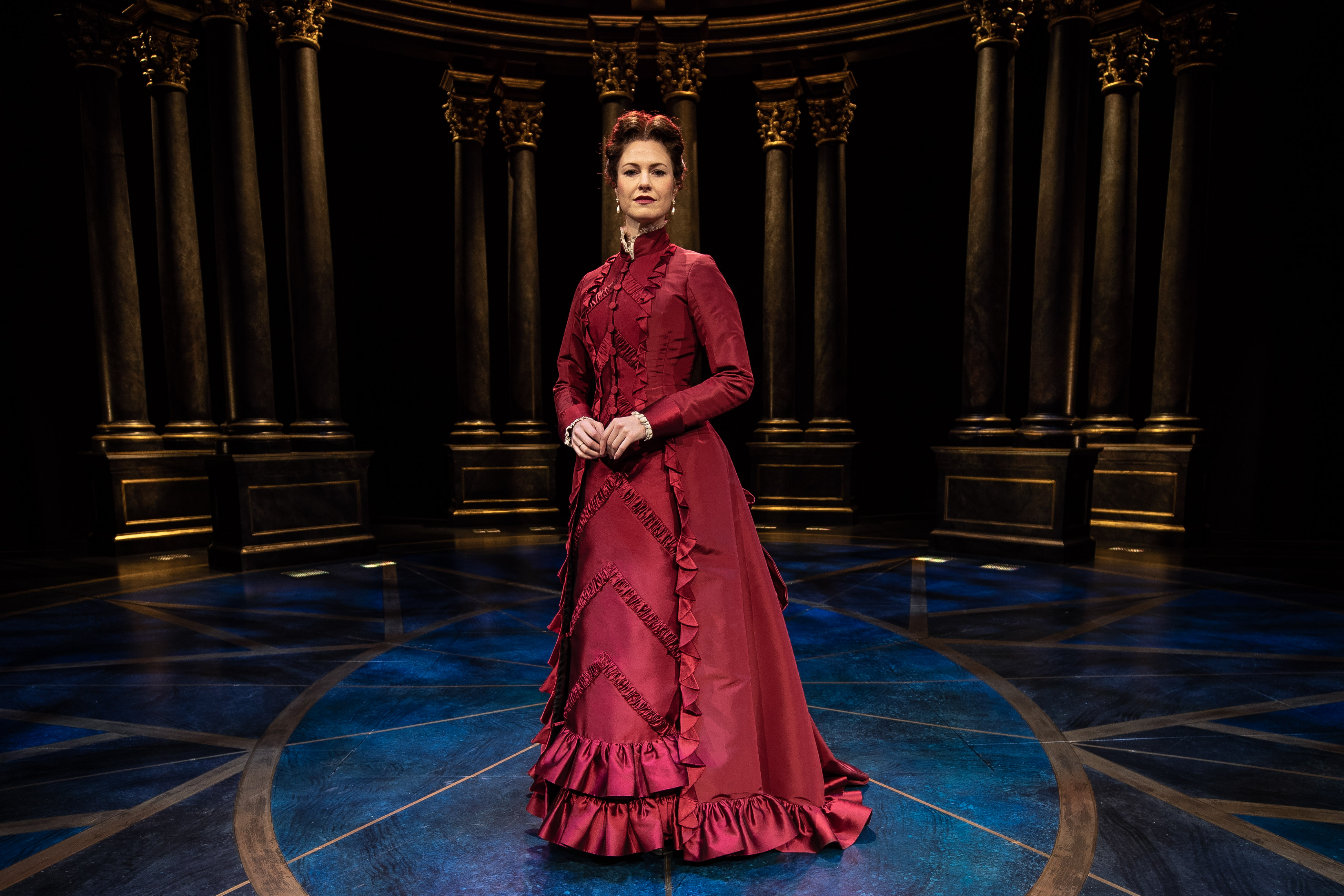 Set in the 1870s in Imperial Russia, the novel by Leo Tolstoy came to life on February 1 at The Stage Theatre, telling the tragic story of Karenina — a St. Petersburg socialite married to senior statesman, Alexei Karenin — and her inconvenient yet passionate love affair with Count Vronsky — a wealthy, charming military officer. As the story unfolded on stage, costume designer, Jeff Cone’s visual story did as well, with swirls of red silk, black velvet and delicate lace. “I had worked with [director] Chris Coleman and Jeff Cone before so I knew it was going to be very beautiful,” said Kate MacCluggage, who played Karenina. “I was very excited so the first thing I did when I got here before the meet and greet, before I signed paperwork, I had a costume fitting. That’s how excited I was.” 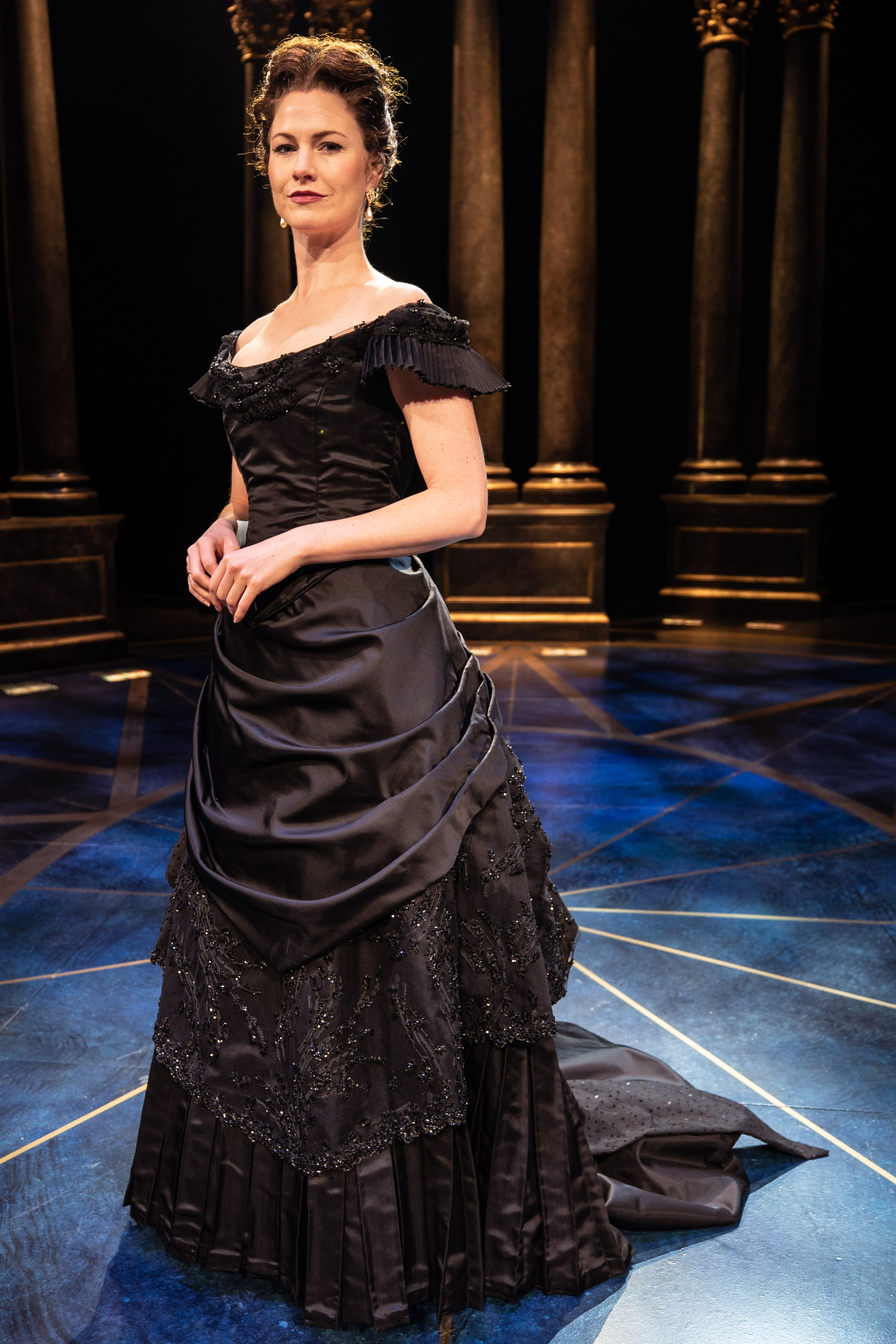 Cone’s costuming punctuated each pivotal moment flawlessly in Coleman’s adaptation. When we first met Karenina, she was smartly dressed in a corseted, deep red dress buttoned to the very top of her neck, appearing to almost drown her in fabric as she fought waves of unhappiness in a passionless life with Karenin.

“I tried the red dress on and I saw this high neck and it was flattering but here is this woman who is constrained by this society,” said MacCluggage. “The design was really good because I knew in an intellectual way that she was constrained but feeling this kind of restraint and knowing I was going to be corseted it just puts your body in an emotional state.”

The tide turned the first moment Karenina danced with Vronsky in a dazzling onyx dress surrounded by the most important figures in the Russian aristocracy.

“Louise [Powers], who is the draper, created something that is so gorgeous and so artistic,” explained MacCluggage. “She’s draped it in such a wonderful way and picked all of these different fabrics so she created sort of this gorgeous work of art. It’s the only dress in that scene that has any sparkle in it but it’s not gaudy. It’s true, this is a woman who knows exactly the right thing to wear. It’s not too much, it’s not too little, it’s just right and that’s a hard thing to design for.”

It was a breathtaking moment that showed Karenina’s characteristic perfection that made her almost untouchable — the beginning of a journey that would eventually show her as an imperfect being in a harsh world. “This character is so complex and so tragic but she’s also very human. I think it’s really recognizable and that’s Tolstoy’s genius but I think it’s also what we’re doing here,” said MacCluggage. 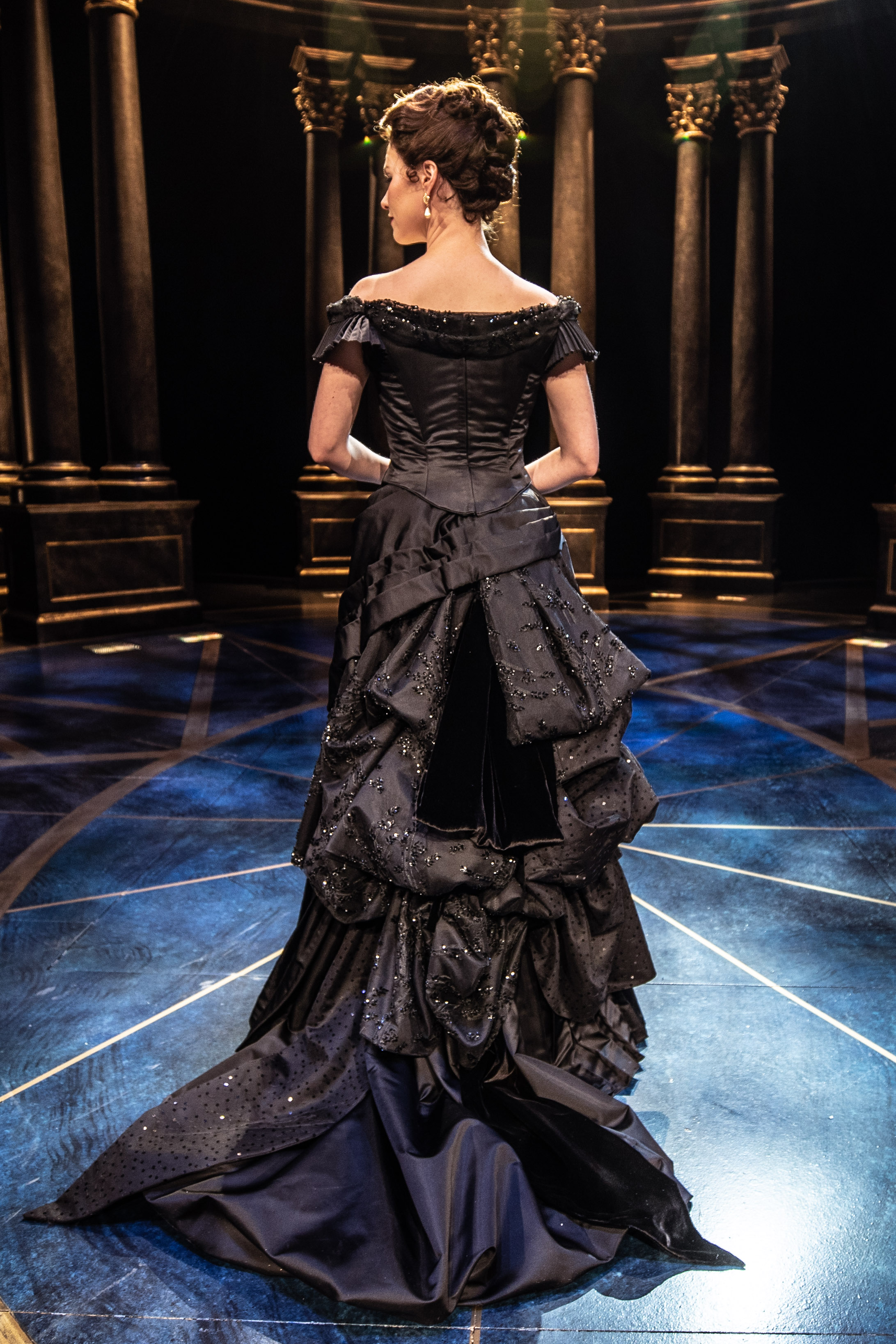 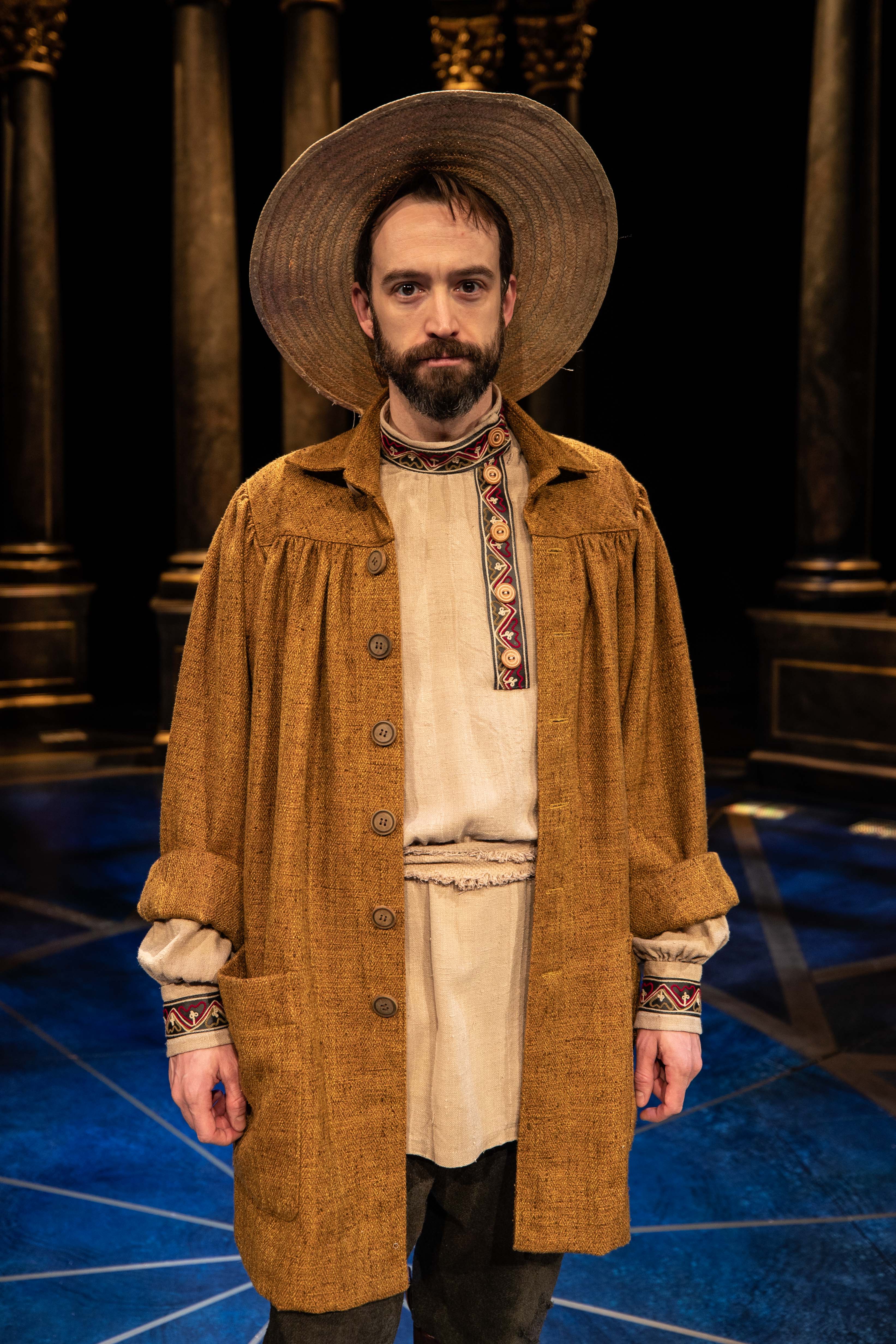 Throughout the play, the audience got to know another story altogether different than Karenina’s. Konstantin Levin is a wealthy landowner and although he came from wealth, he rejected the aristocratic society’s treatment of lower classes. In a constant battle against societal injustices, Levin chose to share his land and reject his charmed upbringing, only occasionally appearing at upscale events.

“Because he is one of the focal points of a very separate narrative from the traditional Anna Karenina story, it has to be clear that he inhabits a completely separate world from the rest of them,” said Kyle Cameron, who played Levin. “We made a decision at a certain point that he is not very fashion conscious but I was imagining myself at a ball and proposal and eventually at a wedding and sort of wondering that he can’t be this out of touch.”

Cameron first appeared in an intricately embroidered kosovorotka — a Russian peasant shirt — underneath a smock that seemed to be constructed using burlap — an eye-catching reminder of the issues this dichotomous character grappled with throughout the play. Cameron worked closely with Cone and his team to develop attire that would fit in both realms of society in either role — farmhand or aristocrat — but less fitted and polished, visually indicating that he was certainly out of his element. 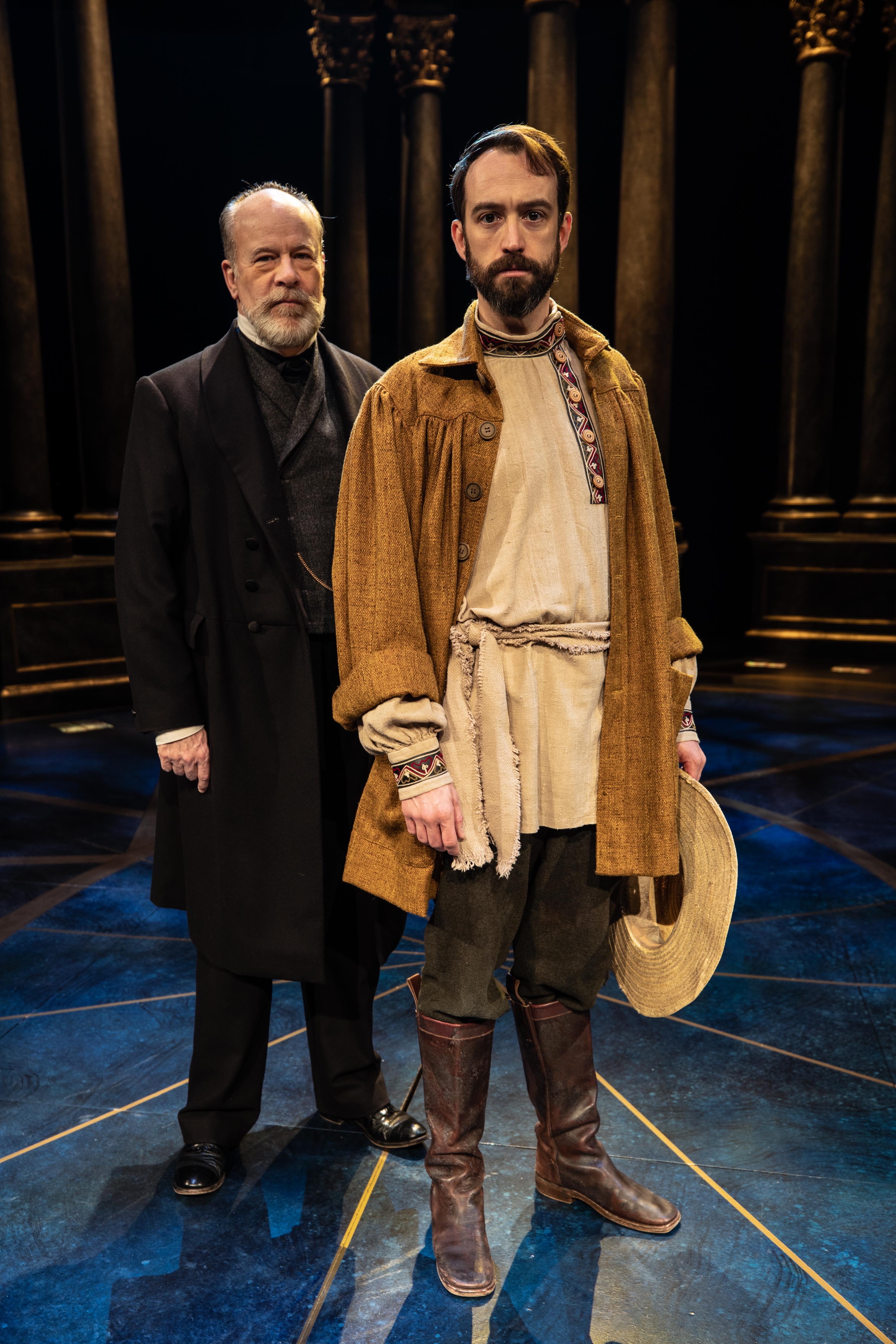 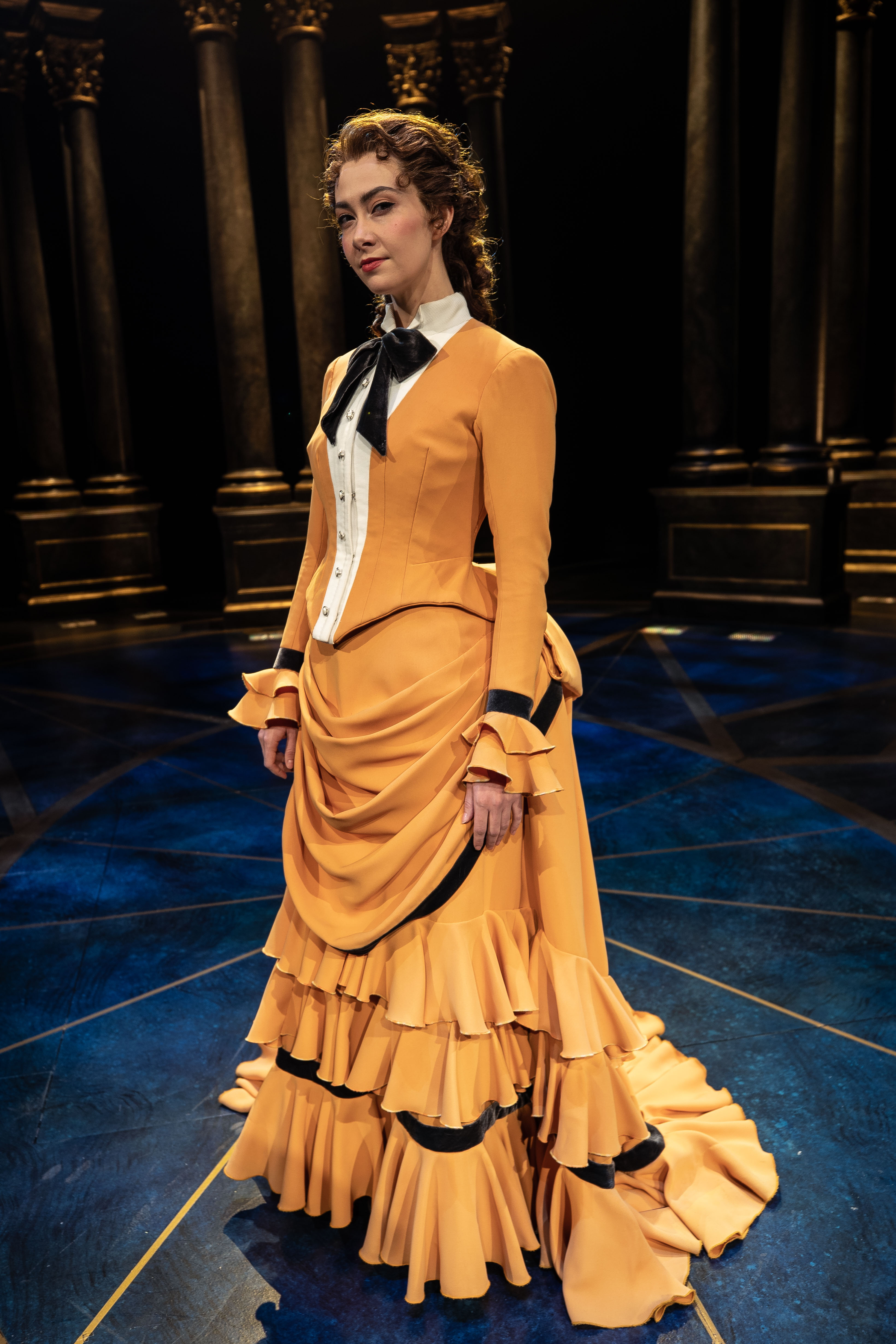 Levin’s love interest in the play — Kitty — perfectly balanced Karenina as the bubbly, starry-eyed ingénue, infatuated with love and all of its possibilities. In contrast to Karenina’s structured, proper attire, Kitty’s youthful, sherbert-colored dress swayed and danced as she did.

“Jeff did an amazing job with the color, the detailing of the ruffles and how the skirt moves — the silk and beautiful velvet trim — which is really nice because it is appropriate for her status and what she would be wearing,” explained actor, Allison Altman, who played Kitty. “She’s a princess in high society. I also like how Jeff created it because there is a bit earthiness about Kitty. There is certainly something earthy about her that draws her to Levin and I think that’s beautifully detailed in this costume. He has made her vibrant and young but she has a bit of depth to her.” 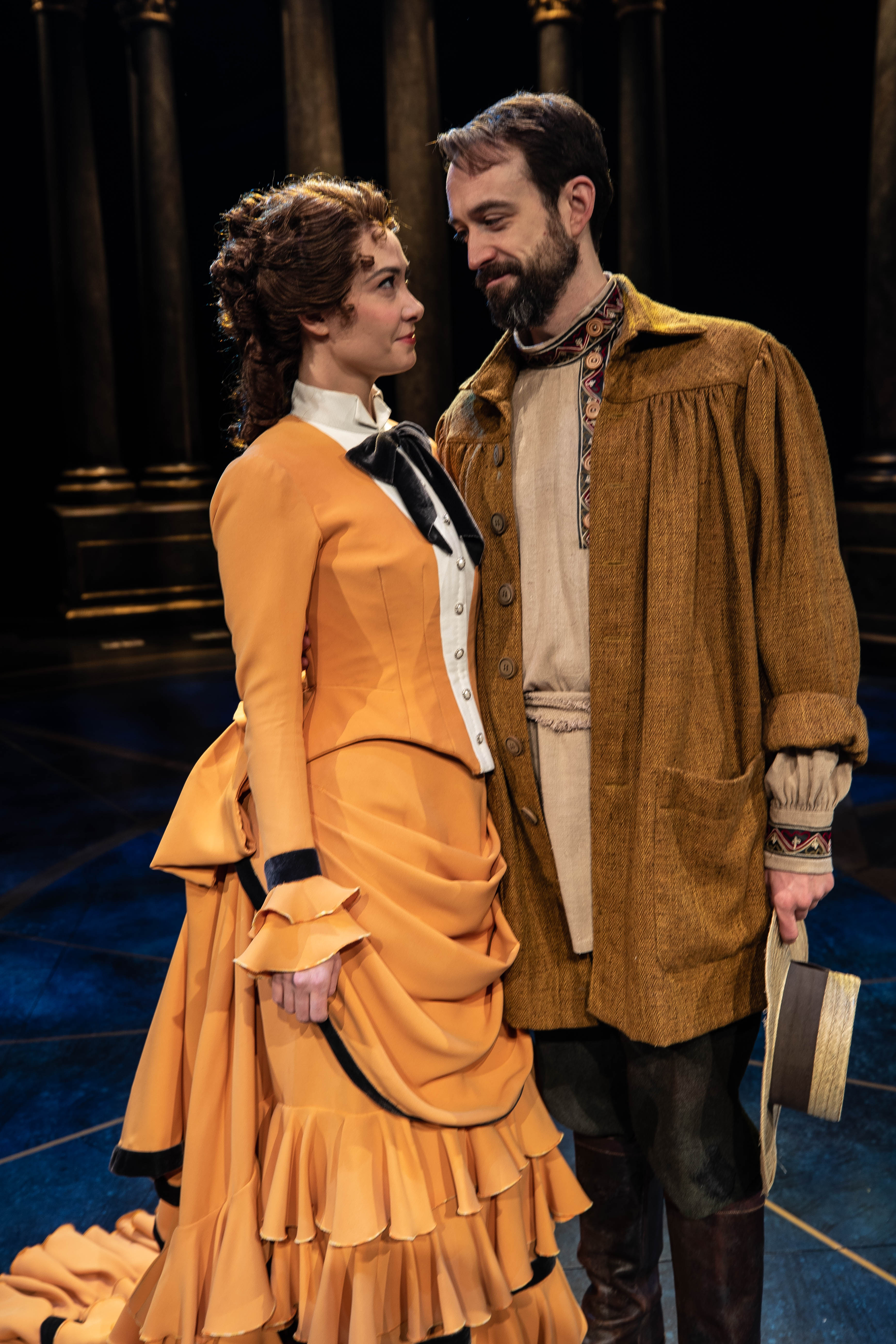 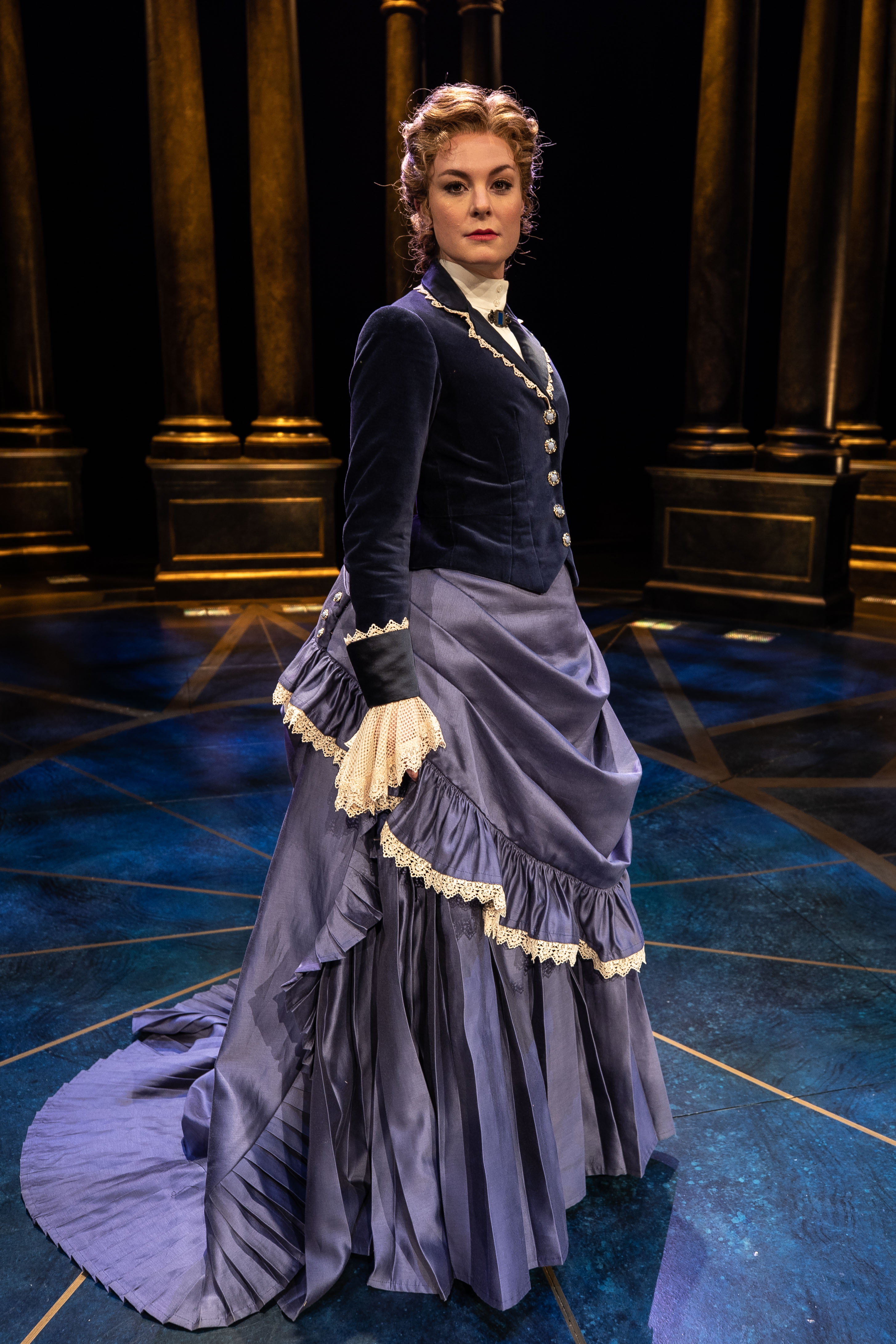 Dolly entered the stage for the first time in a fit of rage and anguish, devastated by her husband’s infidelity and uncertain about her next move — whether that be to leave him or stay for their children. Strong and loyal, she shrouded her pain in a structured, corseted gown with a high color and geometric brooch, but heartbroken, she appeared in cool shades of periwinkle and navy blue with listless lace.

“The lace detailing that they’ve added has become a really big part of the character for me,” said Anastasia Davidson, who played Dolly. “She’s been betrayed by her husband. She’s been deceived by him so I think just having this bit of weepiness to her prim and proper and square look and then you get a little bit of draping and it’s really sweet and adds to her softness as well.” 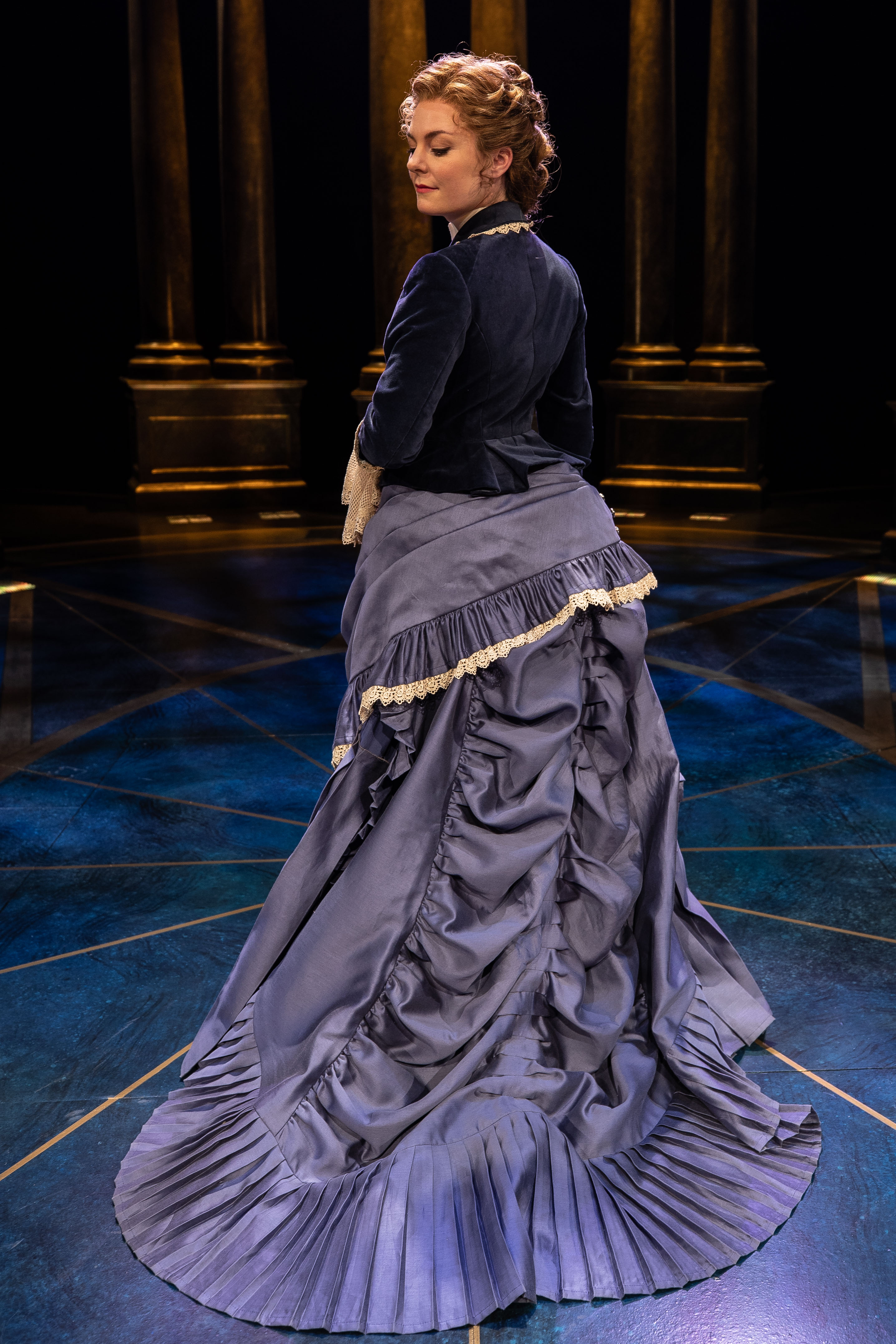 The lavish clothing of Imperial Russia’s aristocracy — rich with fur, velvet and imported silks — flaunted importance and created boundaries between those who had social significance and who did not, as much as extravagant attire does today. In Cone’s world at the DCPA’s The Stage Theatre, not only did color, flashes of jewels and layers of fabric communicate how lifestyle and fashion are inextricably linked, they took us on a visual journey through love, life, hope and despair. 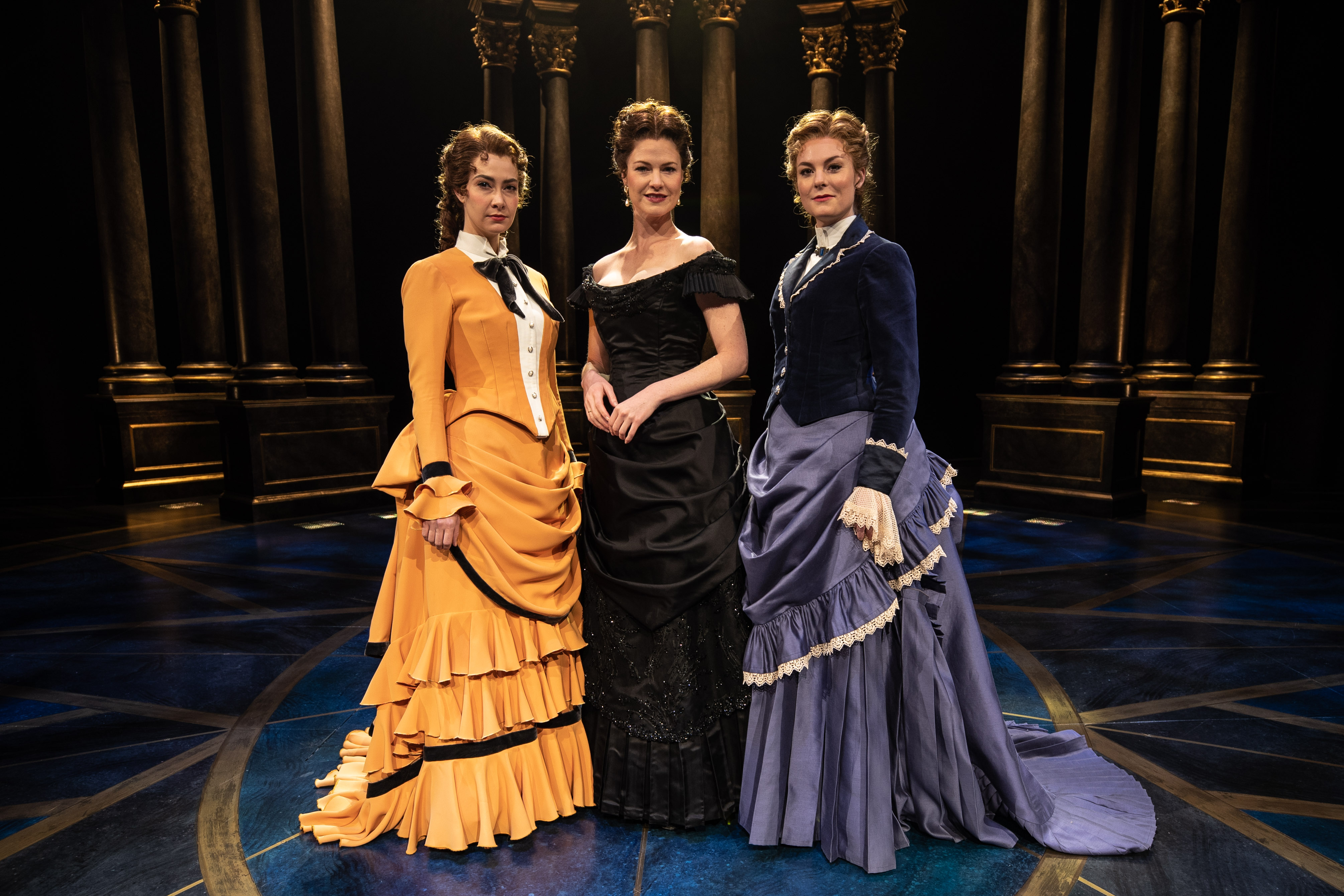