This Saturday, women, men, children and non-binary folk took to the streets of Denver for the third annual women’s march. However, this year the event was slightly different due to the scandal that has embroiled the national organization. Claims of anti-Semitic rhetoric from leaders in Washington D.C. put many local marches and marchers in a predicament on how to proceed. Like other regional events, Denver decided to push on, while carving a path of its own. Alongside a name change (from Women to Womxn) and declaring itself an independent nonprofit, the Mile High event focused on a message of inclusion with the theme of Listen.Unite.Act. The event also partnered with local rabbis for a Shabbat service before the march. It seems that the efforts to create an inclusive environment did encourage many dedicated marchers to return with organizers stating that upwards of 80,000 people marched this year — based on aerial photos.

However, this is still considerably less than past years and when speaking to many of the attendees, it appeared the large majority were not new to the event. Read on to learn more about why they returned, and why they decided to march this year.

“We know there’s been some controversy with the Washington organizers. I personally feel really pleased that the Denver organizers are committed to inclusion for everybody and have no problem standing up against prejudice of any kind. So that makes me more comfortable here in Denver,” Barbara Niederhoff, 52, Aurora.

” I was listening to somebody yesterday on the news and I thought they made a great point. They said to separate the cause from the leader. There’s the cause. There’s the movement. And then there’s the leader saying these things. And I thought, you know, that makes sense to me. People need to come out and support women and support a change in every direction and reduce discrimination and oppression and just make a statement out loud,” Bob Kelsall, 66, Layfatte. 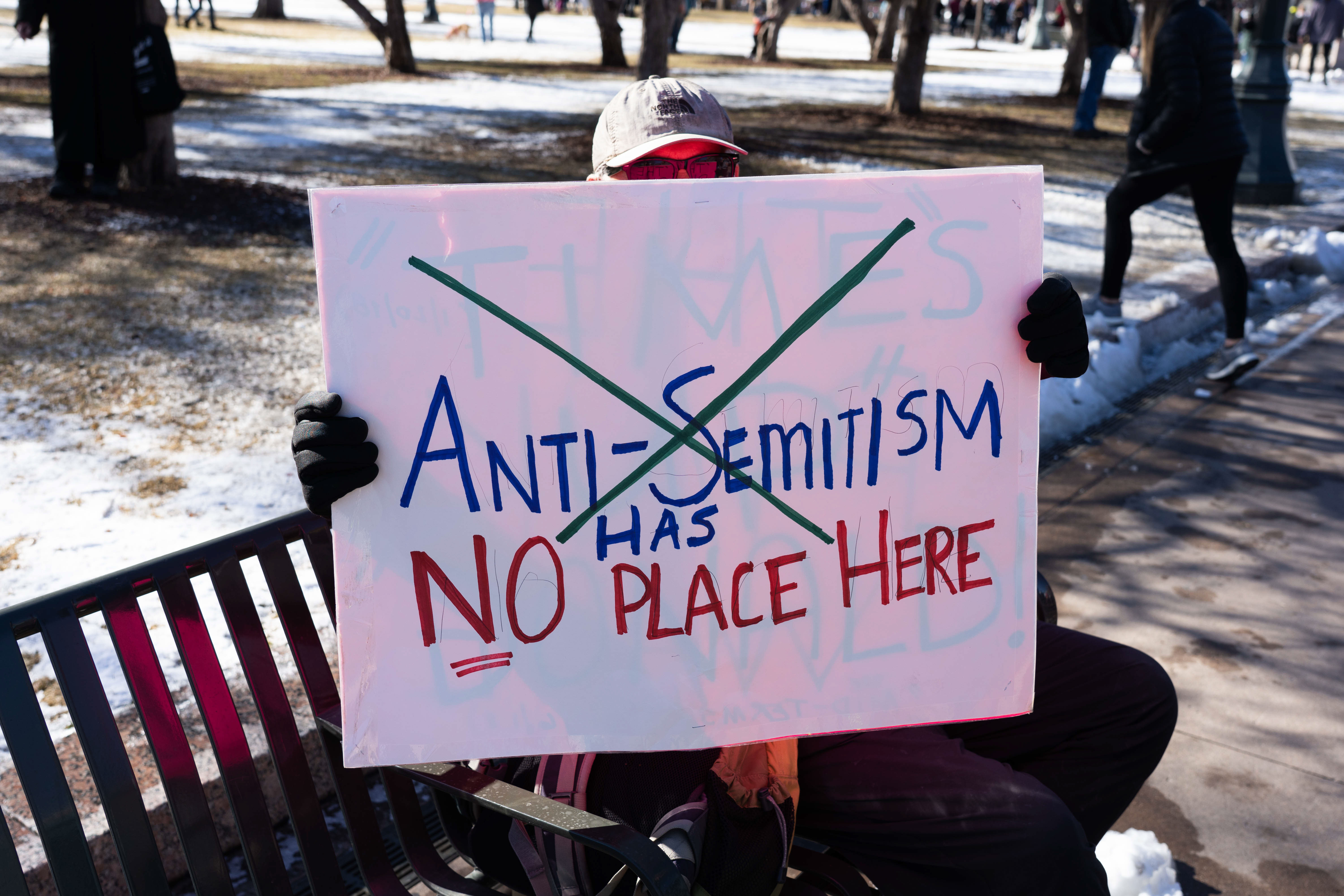 “I think it’s important for our son to realize that equality is super important, that women are not separate, they’re not different, but they deserve the same thing everybody else does.” Leslee M., 41, Broomfield

“I’ve been to every one, because these are my three daughters. As a mother of three daughters, it’s very important to me to show them to represent, stand up for ourselves and other women and support equality. Kindness in the world and what the world should be like.” Cristina F., 37 Denver 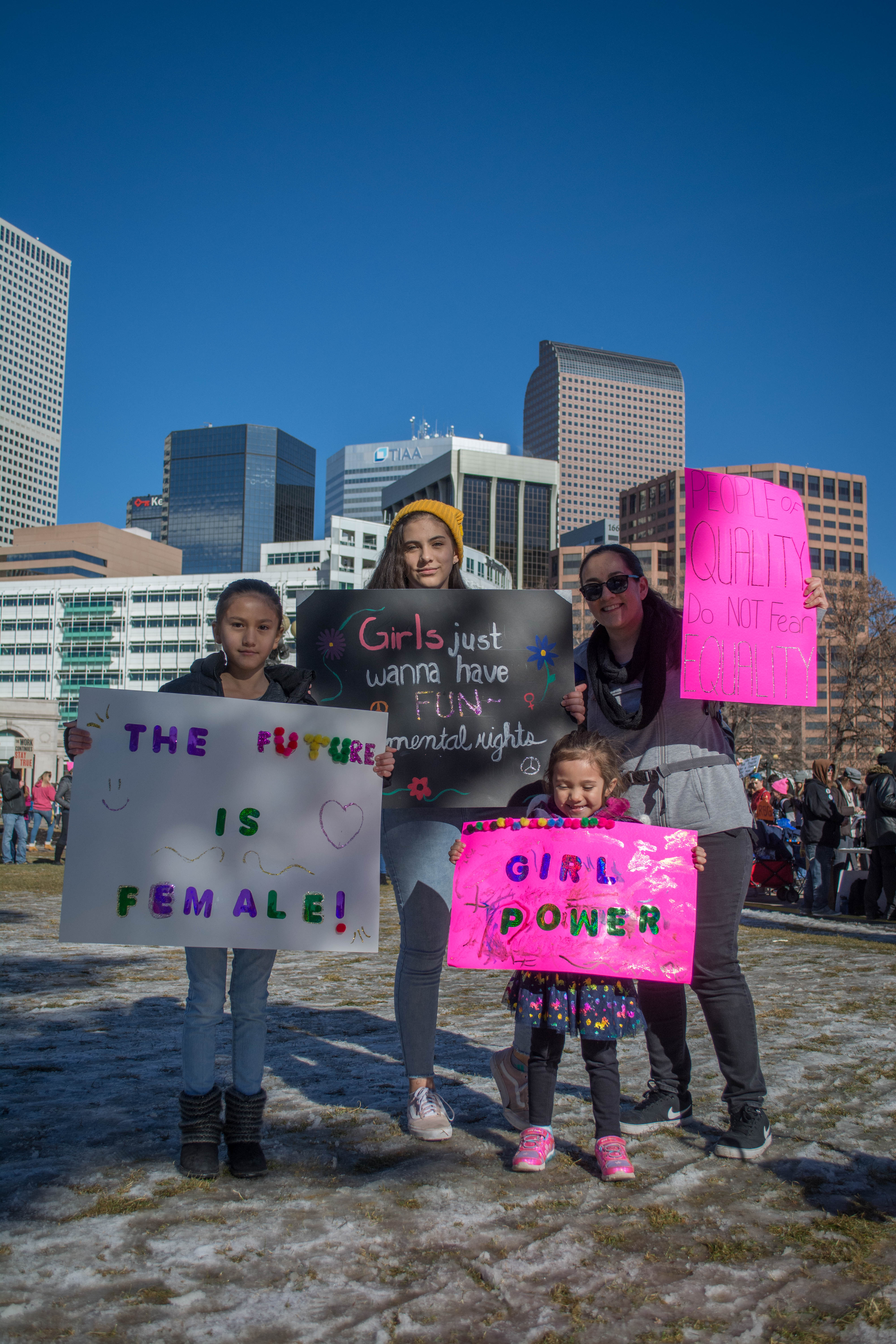 Cristina F., 37 Denver and her daughters. Photo by Evans Ousley

“I’m here because I feel really strongly about equality and everything, but I’ve never been able to go to a women’s march, because last year I was on crutches and my mom has always had to work. It’s just really important to me to stand together and know that everybody’s welcome and everybody’s standing up for each other.” Molly R. B., 11, Denver

“This is our friend, her name, is Marzieh Hashemi. She’s an American journalist, an American citizen. She was arrested last week at the St. Louis Airport, taken into custody, sent to Washington for the federal prison and was not charged.” Diane, 60, Denver 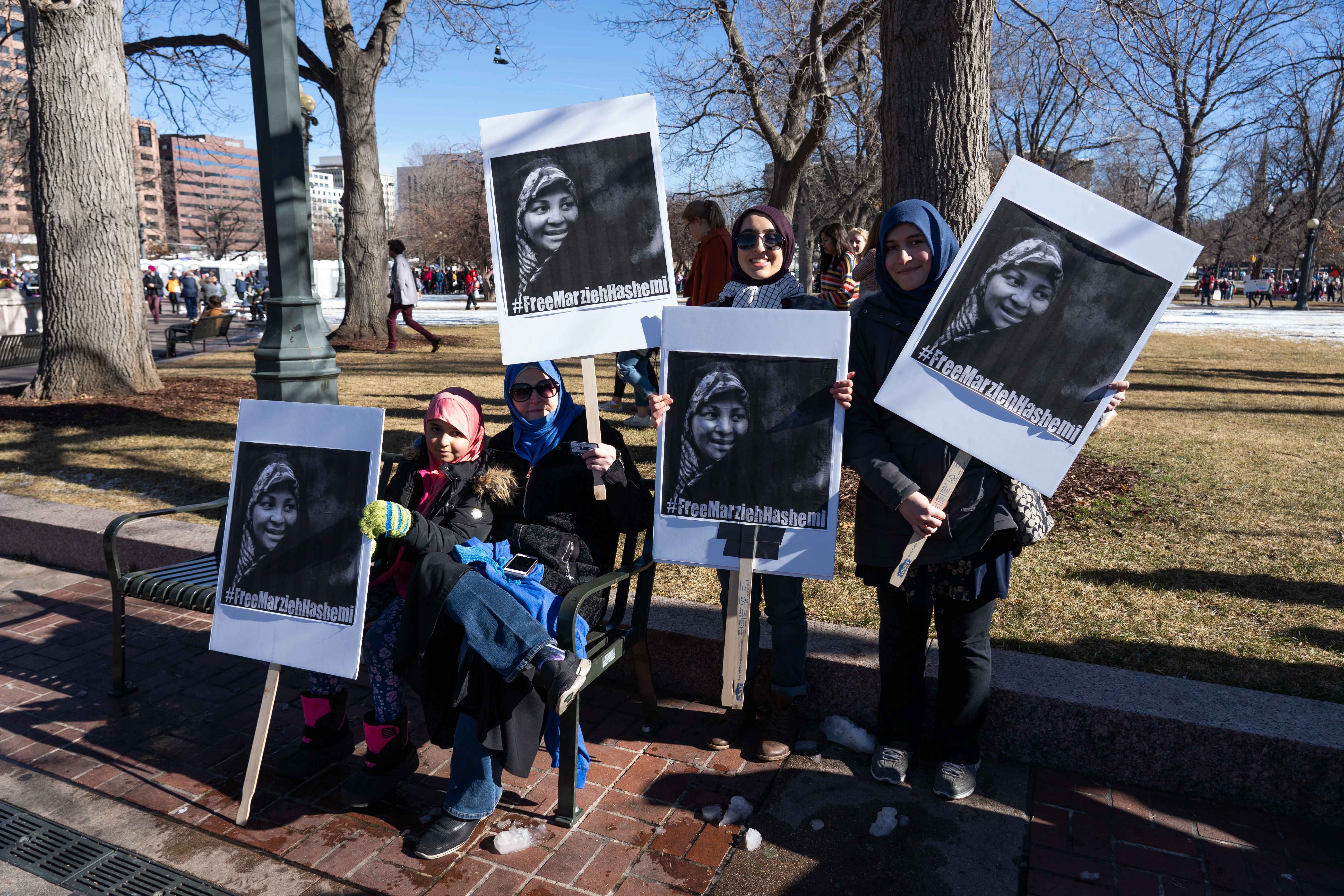 “Something that my mom said is it’s important to stand up for women and stand up for each other.” Noemi P., 10, Denver

“Considering all the inequalities everybody faces, whether it’s women, people of color, people of the LGBT community, – and us having a president that doesn’t recognize that or fight for us, isn’t right.” Belen P., 14, Denver

“It’s a lot to go through as a woman, and it just feels so good to be here together and to feel united and here for each other.” Angelica Gutierrez, 19, Boulder 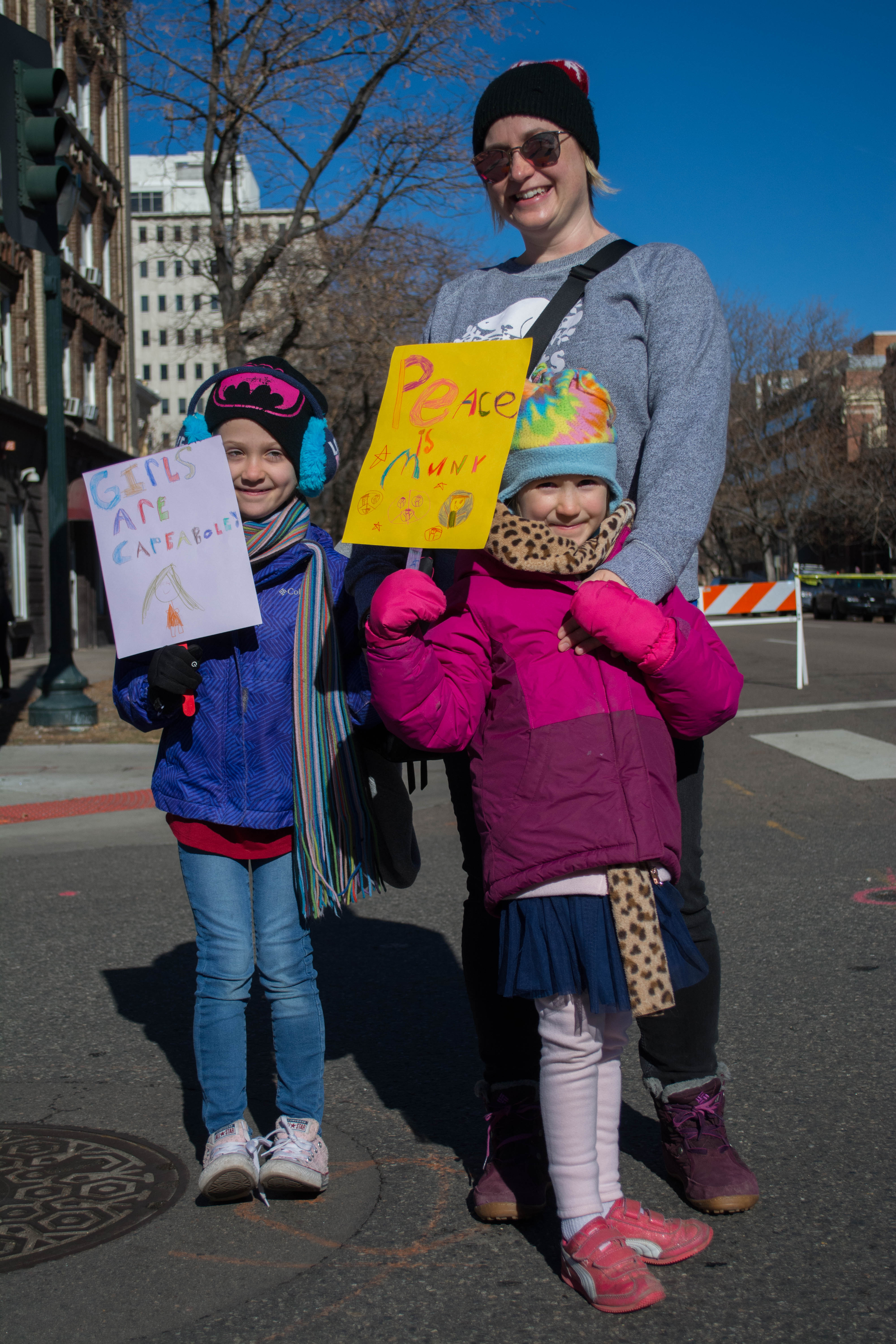 Sarah C., 37, Denver and her daughters. Photo by Evans Ousley

“We came out today because I want to make sure things are better for my girls, and everything is more fair – equal pay for equal work – and make sure they have all the reproductive rights they deserve.” Sarah C., 37, Denver

“I came out today to stand in solidarity with all of my sisters and all of my community in Denver to make sure that our voice is heard, to make sure that we as a community come together and stand in solidarity with women with women’s rights, with social justice reform, for all of our community. And to show pride that we are women, that we are here, we’re not going anywhere that we demand equal rights, we demand respect… I’m running for city council in District One and I’m definitely ensuring that people in my district and all throughout this city and throughout the nation are part of a community that they’re welcomed in and that we’re not just discriminating against people,” Victoria Aguilar, 35, Denver 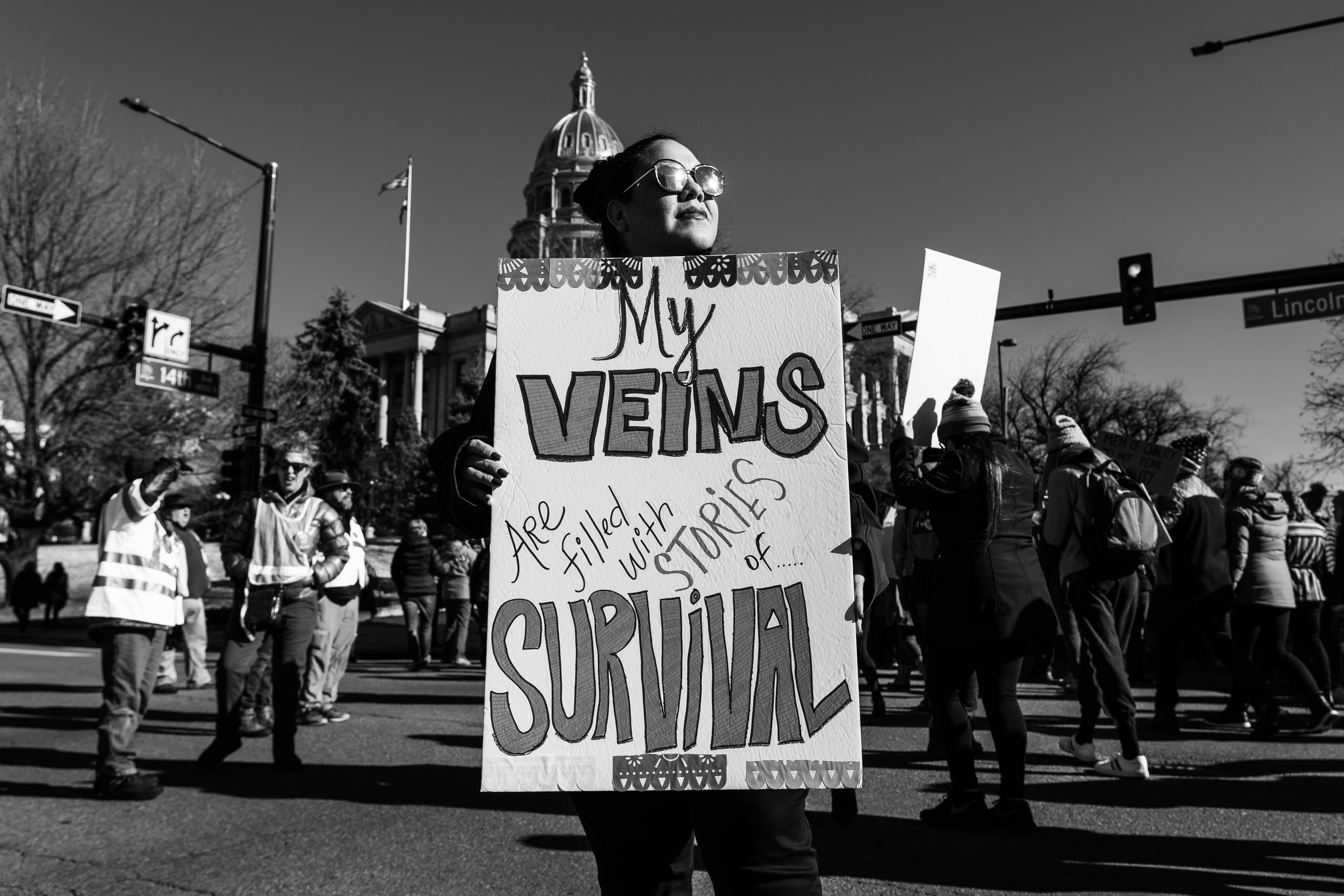 “I am really concerned about the state of our union. I’m sick of it and I’m scared, but I’m empowered. We need more feminine energy and maybe we will end the wars.” Kelly Joan, Denver

“I’m marching for my children and my grandchildren.” Brenda Bickerton, 51, Aurora

“There are a lot of great people here, and it’s nice to know that there are other people that are concerned. I want things to make a difference but if anything, it is great to get together and have a lovely reminder that we can all join in a feeling of solidarity.” Becka Black, 23, Englewood

“I’m here because I believe that women deserve the same opportunity and the same rights as any other person. Things need to change and [I ‘ll) continue marching until things do change.” Victoria Montoya, 21, New Mexico.

“The main reason I came today was to bring my niece who’s five and show her what women’s rights means and start her young…” Geona Childress, 22, Arvada. 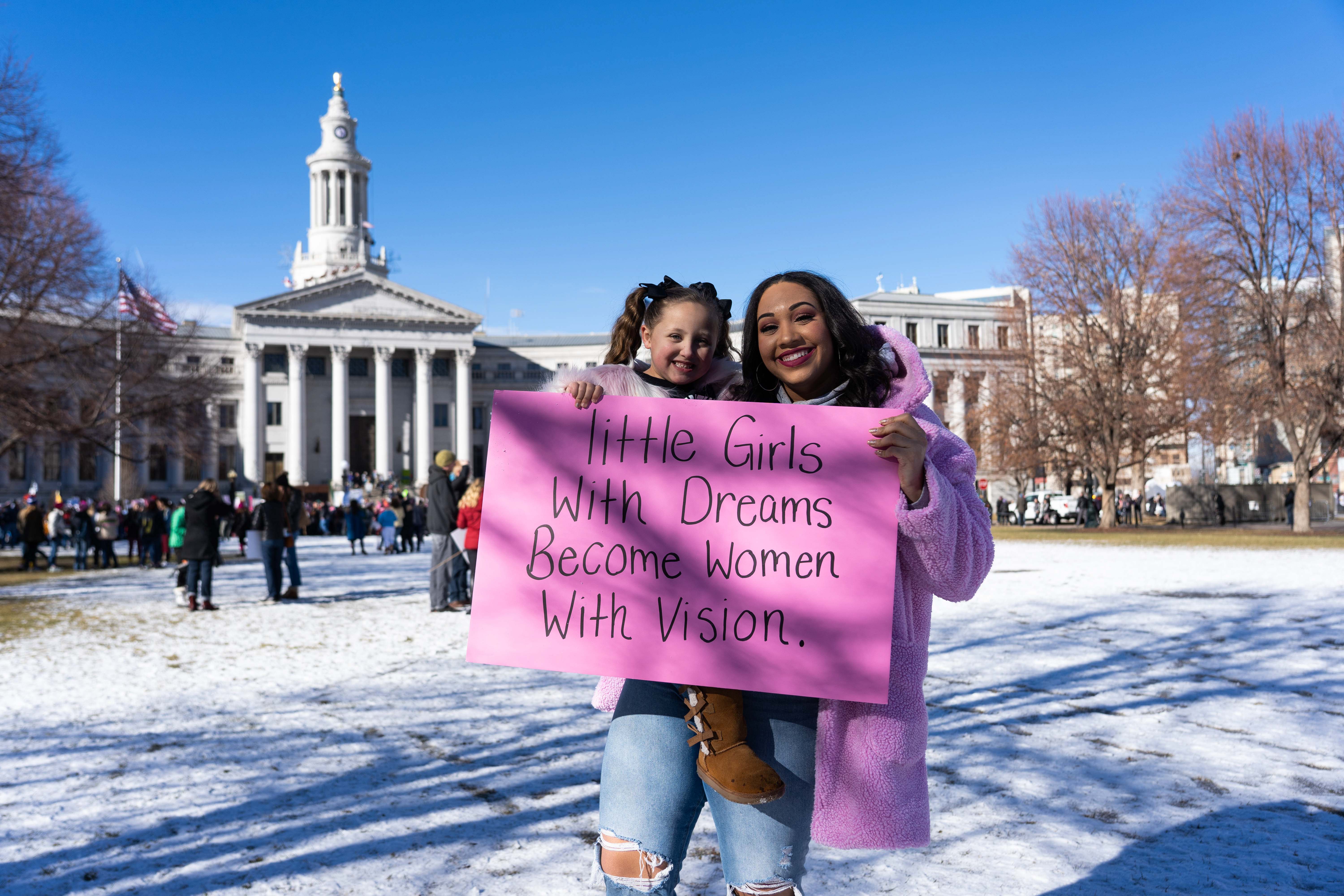 Geona Childress, 22, Arvada and her niece. Photo by Brittany Werges

“Well, trying to put a positive spin on things.  I’m hoping that 2016 was the start of a four year dope slap — that we all need to become engaged and start paying attention, and this is all to hope and to affirm what I really think that American values are and not what happened in the election” Kirk, North Denver

“I’m at the Women’s march today because immigrants can’t wait another day to ensure that policy gets written and to ensure their safety day to day.”

“My role at the ACLU is I’m the immigrant rights campaign coordinator.  The ACLU is going to be taking a bigger stance on immigrants rights. We’ve seen that immigrants rights is the civil rights fight of our time right now and we want to make sure that we are backing up everyone that is an immigrant, is undocumented, or has family that has immigrated which is all of us.”
“We know that women face many issues within society, many oppressions. Undocumented women face even more because they live in the shadows and they live in fear of being persecuted — not being able to report abuse.  So we want to make sure that immigrant women’s voices are being heard.” Ana Temu, 26, Frederick.