You don’t have to wait for an invitation to attend Hogwarts School of Witchcraft and Wizardry. If you love owls and other large birds of prey, but are wondering how to see one up close and in person, skip the zoo. Colorado is home to many creatures big and small, and HawkQuest, a Colorado nonprofit educational organization, allows audience members to experience eagles, falcons, hawks and owls at close range. The purpose is to teach locals about the birds in a more interactive way and inform them about the many ways to protect the birds and their natural habitat.

They also come to you. Whether it’s for a Harry Potter-themed party, wedding or classroom show-and-tell, the birds of HawkQuest are ready to wow large groups with their impressive wingspans, sharp, menacing talons and stunning feathers. And you even get to see them fly. 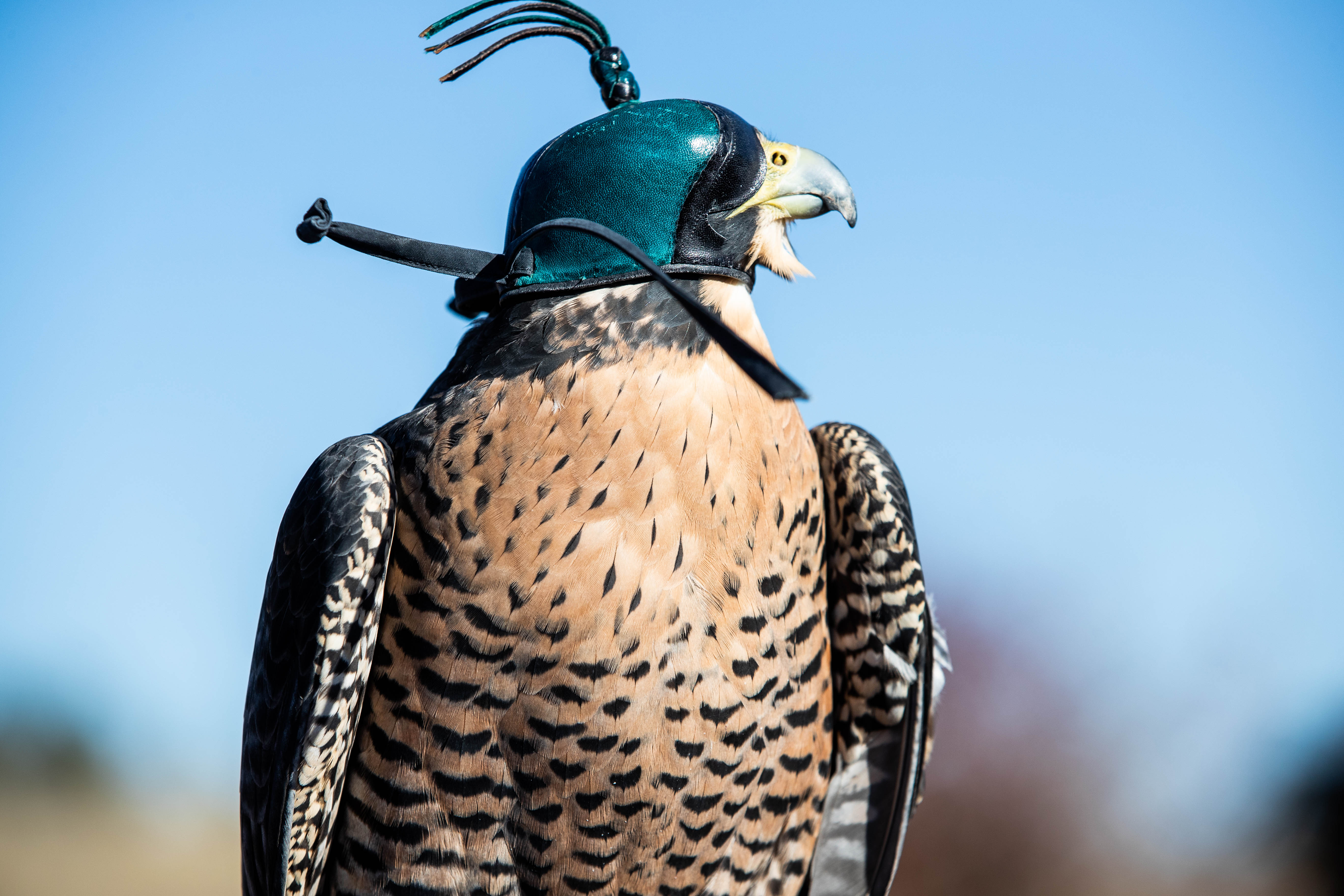 The founder, Kin Quitugua, is whom you would call a “master falconer.” And yes, there is such a thing. He founded HawkQuest in 1986 and has dedicated his time to educating the public about birds of prey for more than 25 years. He has studied and handled a wide array of raptors from all around the world and currently oversees the care of 40 birds, by regularly feeding them mice and flying them on his property in Parker with the help of volunteers and assistants who are specially trained.

According to Quitugua, his fascination with raptors started at a young age.

“I come from Guam and when I was nine, I saw this old movie called The Vikings, and there was a scene in the movie where a hawk caught a pheasant in the air and I was so enamored by that. I said, ‘One day I’m going to train birds.’ But I had two problems. Number one was ‘What do I know, I’m nine?’ and number two, ‘There are no hawks in Guam,’” Quitugua said.

Quintugua’s interest in falconry only became a reality when he attended college in Boulder. There he saw a picture of a red-tailed hawk on a love interest’s wall in her dorm room. She introduced him to a friend who was a falconer and after meeting the man, he got to handle a raptor for the first time. “I put that glove on and held that hawk and I was in hawk heaven,” Quitugua said.

Quitugua said the idea for HawkQuest originated after he acquired his birds and after he realized others were interested in learning more about them.

“I got my first red tail hawk and I was just having a great time training it. I would fly it and just had a great time understanding the ecology of raptors in general,” Quitugua said.

Later he visited a fourth-grade class taught by his friend Beth. She asked him to bring his red-tailed hawk to her class since the students were learning about prairies and the enthusiasm with the kids was so successful, soon other teachers were asking Quitugua to visit their classrooms, too.

“It got to the point where I was doing more with Beth than my real job,” Quitugua said. 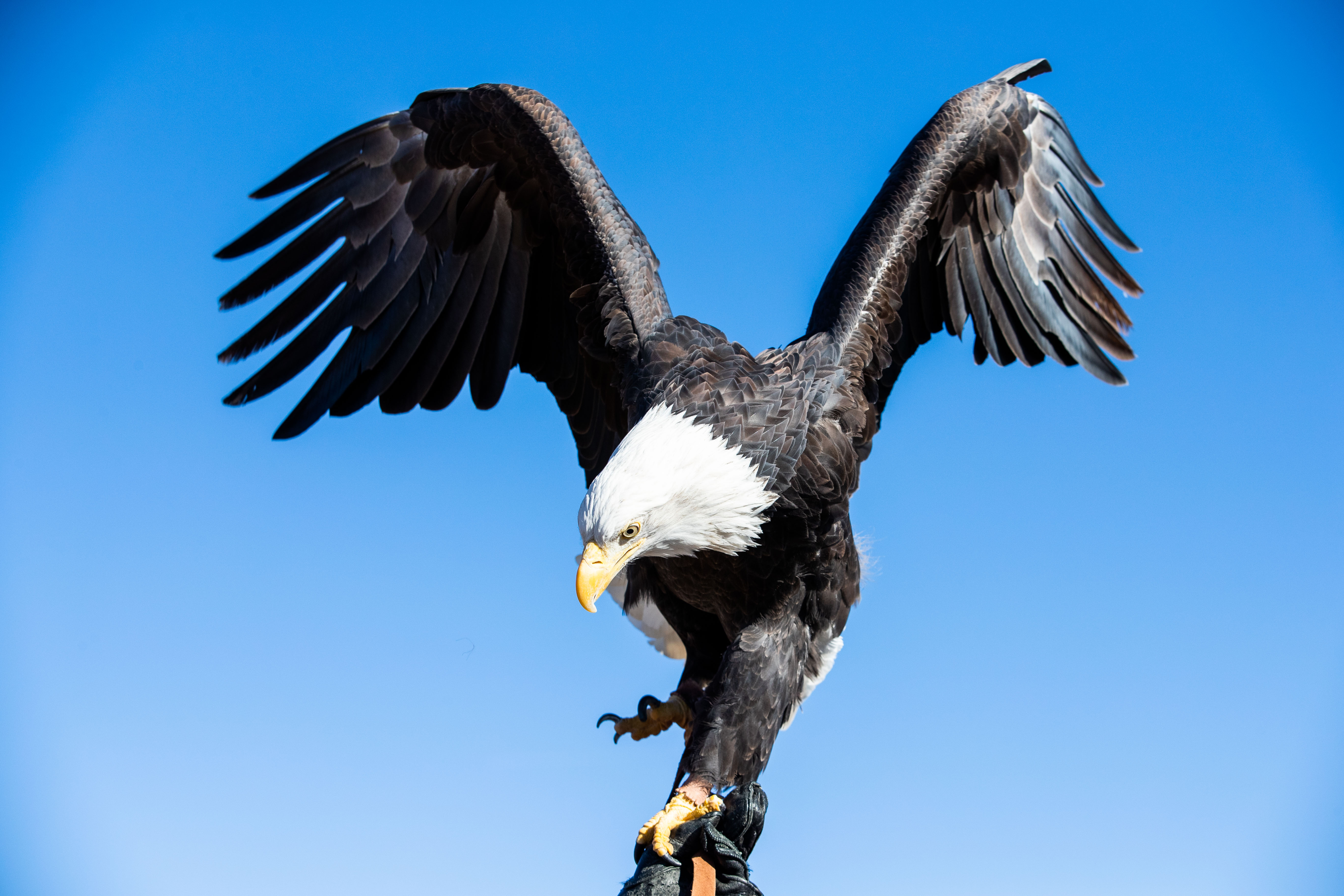 Today, HawkQuest has over 60 volunteers and brings the birds to roughly 600 events each year. They are the largest raptor group in the Front Range in terms of the number of people seen on an outreach basis. The reason for the high numbers is because Quitugua emphasizes HawkQuest travels to visit the public — wherever they are.

When you hire HawkQuest, Quitugua says they typically bring four birds (unless you have a special request) — a hawk, eagle, owl and falcon — and he will fly one of them for audience members. It’s a spectacle that’s a treat for anyone who has never seen a massive feathered fowl take flight.

HawkQuest even has an Owls of the World program, which includes hiring a tiny, funny-looking speckled owl from Peru, a Eurasian eagle owl and other species of owl that live on every continent except Antarctica.

But how did all these birds end up in Quitugua’s backyard? Well, Quitugua wants everyone to know that he’s not taking birds out of their natural habitats. They are rescued or acquired through United States Fish and Wildlife Service (FWS)-approved breeding programs.

“I’ve seen birds that were shot, electrocuted, hit by cars, and I felt that I needed to do something. We get the birds through breeding programs. But a majority of our birds are through rescue. I don’t want to take birds out of the wild. That’s not where my head’s at. My head’s in education. That’s really our focus at HawkQuest. We talk about the environment. We just use the birds of prey because you know, you take a six-year-old and you bring in a bald eagle, and I have that kid’s attention. So really that’s how it all started,” he said.

Quitugua says that it’s also really important to make sure the birds get a lot of exercise so that they don’t spend too much time trapped in enclosures. He wants the birds to be able to spread their wings like they would in the wild.

“I don’t want to be a zoo. Zoos have their place don’t get me wrong — without zoos — we’d have lost a lot of animals, but a lot of the animals — especially the raptors — are just sitting in cages and they have no heart, no spirit. Zoos are really a collection. It’s a business. And what I want to do is get these guys as close to being wild as possible,” he said. 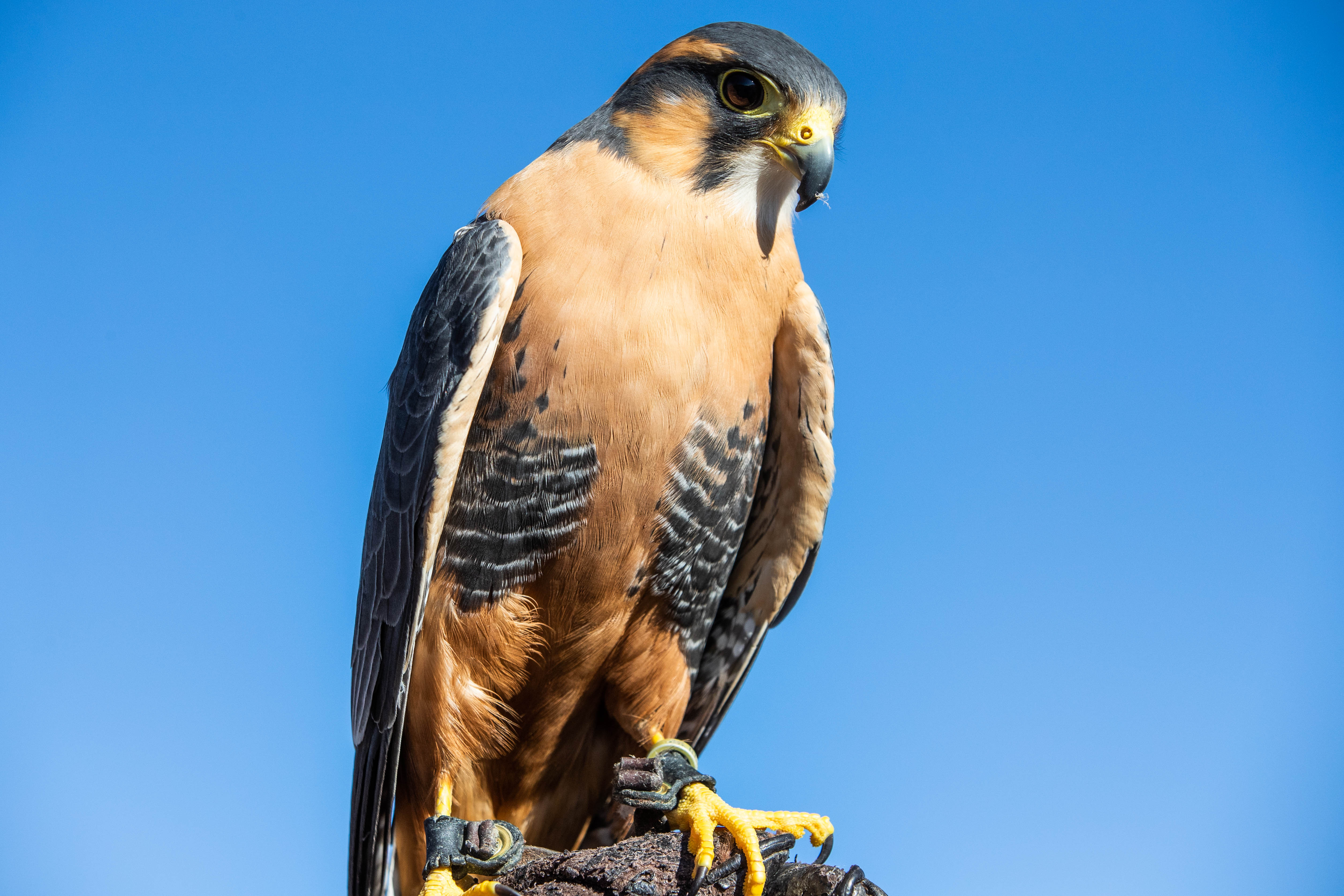 At HawkQuest’s official headquarters in a quiet, rolling country neighborhood in Parker, Colorado, Quitugua’s backyard is quite a sight to see if you’re driving by and see one of the three giant bald eagles just hanging out with a falcon. You don’t see that every day. Quitugua says it’s a challenge to train them and keep them all from eating each other by keeping them separated and closely monitored. Each bird has its own pen, but on warmer days, Quitugua says he likes to take the birds all out on his lawn so they can get a little sunshine.

Quitugua uses his backyard to teach others about exploring their own backyard and wants to make a difference by promoting environmental stewardship and educating people on the dangers of damaging the ecosystem.

“The kids today are not connected. We are more connected on this thing called our cell phone and a lot of children have no idea what’s going on in their backyard,” Quitugua said.

“As humans, sometimes we think we own this world, and we don’t own it. We’re just passing through. But we think we’re at the top of the food chain. We’re supposed to be the smartest. And if you look at what’s going on in the world, it all has to do with us. Raptors — they’re perfect killing machines. All they do is eat and have babies. But they’re not polluting it [the world]. They’re just doing their thing. It all has to do with us. Education is the key.”

HawkQuest is located at 12338 N. 2nd St., Parker. Business hours are 9 a.m. to 5 p.m. Tuesday through Saturday. Call 303-690-6959 for prices or email [email protected] for reservations. HawkQuest does not have a physical location to visit and all prices depend on the location of the event.