–
Plastics are invading our oceans at alarming rates. The Ocean Conservancy estimates that the amount of plastic entering our waters is equivalent to a New York City trash truck unloading every minute of every day of every year — and it’s expected to double in the next decade. It is because of this relentless unleashing of plastics, in every form from straws to styrofoam, that swirling masses circulate in the oceans and take over coastlines across the world. This is the scene with which world-renowned Spanish street artist Okuda San Miguel sets his solo exhibition coming to Denver next week.

Titled The Plastic Island, Okuda’s installation will combine the iconic characters he’s painted on walls and abandoned buildings globally with a newer addition of sculpture and multimedia collage. But instead of merely exposing the problem of plastics, The Plastic Island relies on Okuda’s colorful imagination to transport viewers to a dystopian future where plastic islands are tourist destinations and the guests on holiday are partly made of plastic themselves.

“Welcome to this incomparable place, it is a pleasure to receive you in the wonderful Plastic Island. We have been told that plastic is necessary for our daily life… what we have not been told is that plastic will kill us,” wrote Okuda in the statement about the exhibition. 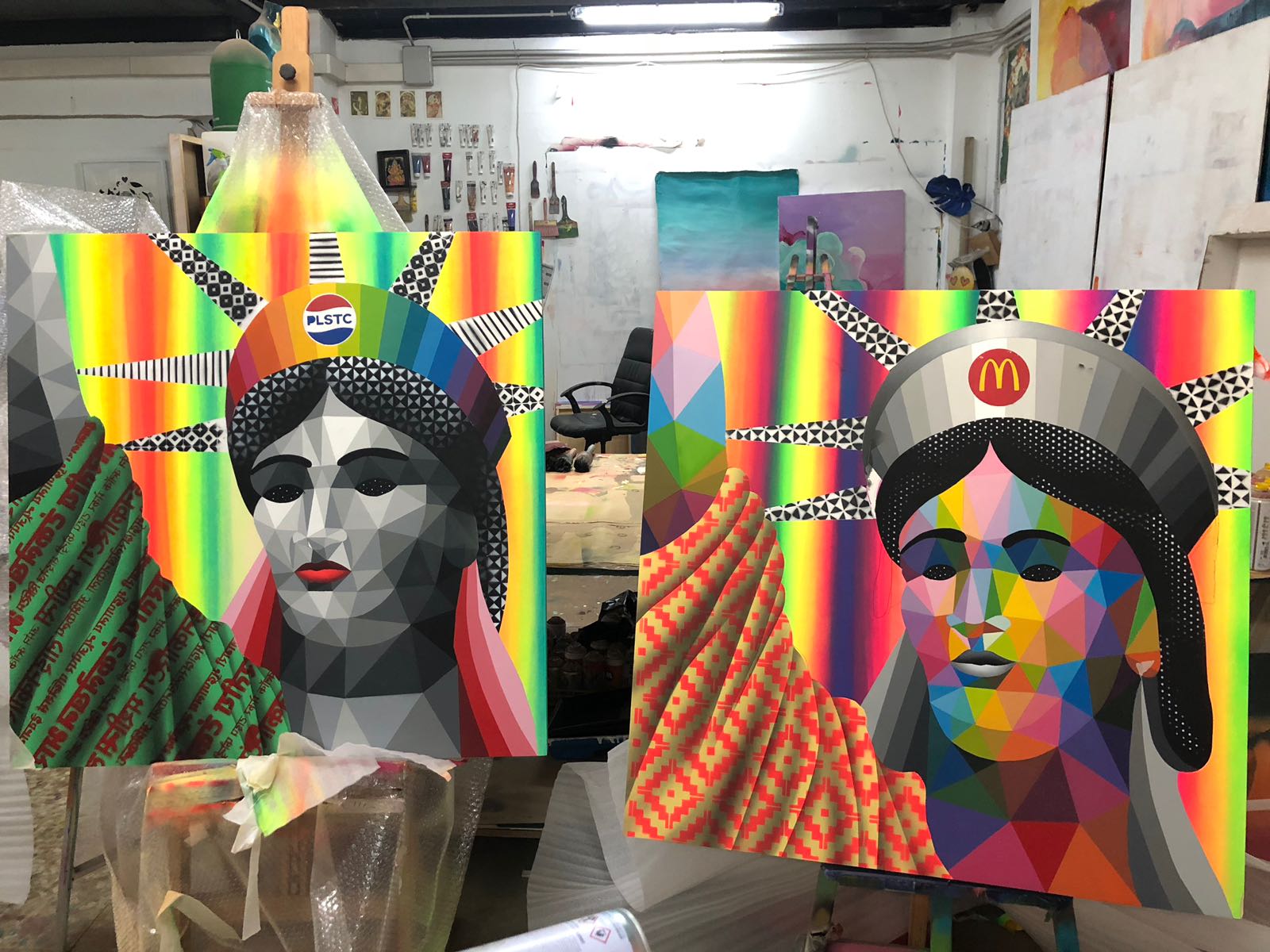 Opening on November 24, 2018, at Mirus Gallery, The Plastic Island will provide Denver art lovers a rare occasion to be immersed in Okuda’s multimedia work. Although it’s not his first visit to Denver — he came in 2017 to paint the interior walls and ceiling of the International Church of Cannabis — and not his first time displaying at Mirus, it is his first time taking over an entire gallery here.

The work will still incorporate the geometric forms of expertly contrasting and saccharine colors he’s gained popularity with, but it will also introduce the artist’s determination to experiment with new forms and techniques. Wood, photography, differing patterns and the underlying narrative of The Plastic Island will set it apart from his previous work while the continuation of his semi-mythical beings will ensure long-time Okuda fans won’t be disappointed. These semi-mythical beings, for those who aren’t familiar, often appear like modernized, digitally-vectored Egyptian gods — with the head of a bird and the body of a man, for instance. Combining the natural symbolism with bright, contemporary color choices evokes a sense of wonder or awe in many onlookers to Okuda’s art — a reaction that mirrors his own inspiration for creating. He finds a way to make existentialism, esoteric philosophies of the universe and the meaning of life playful, fantastic and downright pretty. 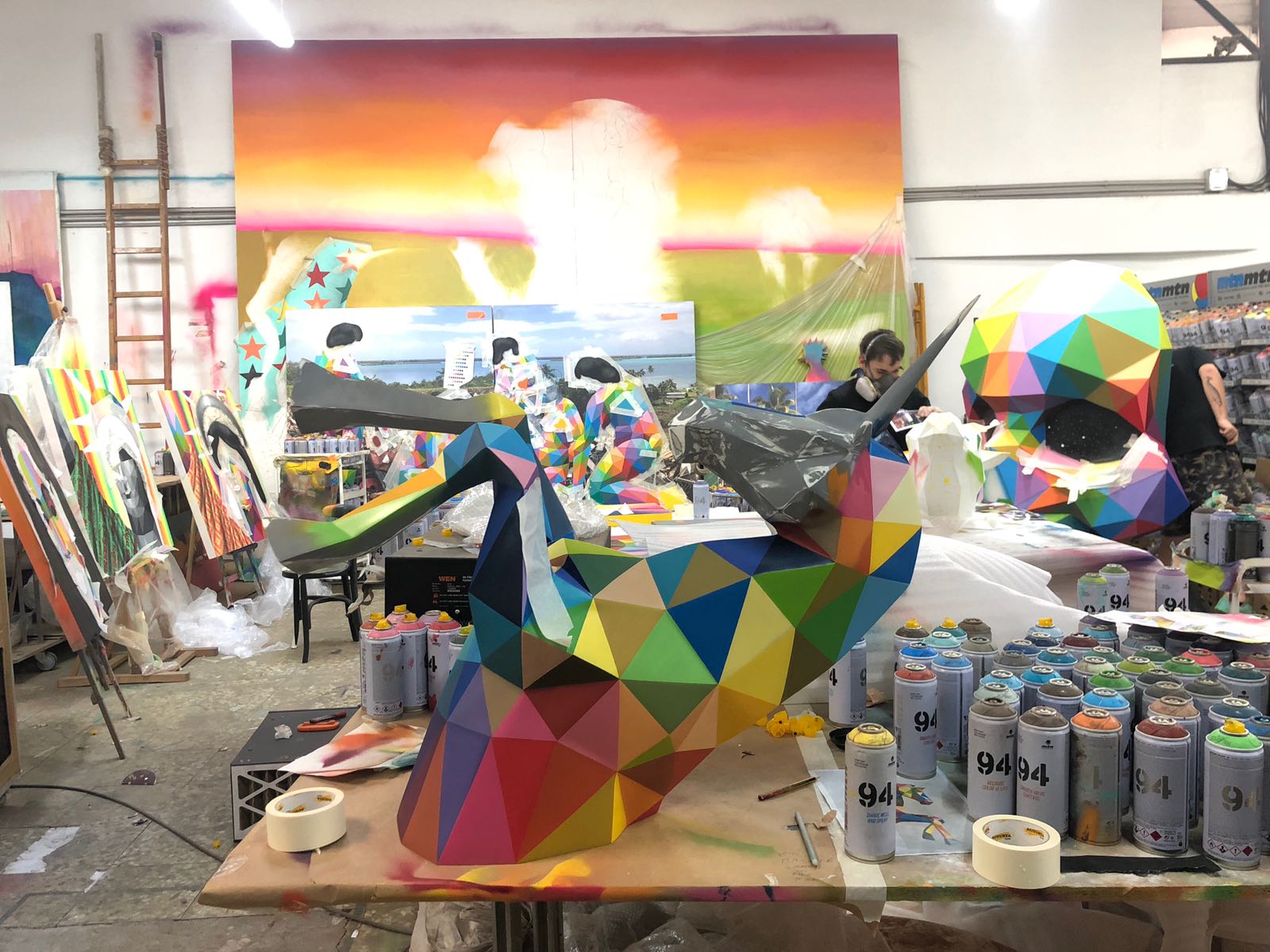 The Plastic Island will be as pretty as it will be painful if you follow Okuda’s narrative. On the surface, the installation will entice viewers to comment on the harmonizing triangles of complementary tones — which will only provide proof of Okuda’s extraordinary eye for color theory, and using colors to direct the viewer’s focus. Without taking more time to visually explore the pieces in The Plastic Island, however, the viewer will suffer from the very thing Okuda whimsically critiques — an inability to think beyond oneself and beyond the “norm.” Instead, the exhibition is designed to be contradictory so that the viewer must question their initial acceptance of each scene.

“Once it has reached our lives and begun to be received with open arms we fear it will not be easy for us to get rid of plastics. As useful as they are, [they are] toxic in the long term, they have become omnipresent and it seems impossible to imagine life without them,” explained Okuda in a press release. “We find them at home, on the street, and increasingly in our seas and rivers. As if it were not already with us and its consequences were not affecting us, the plastic islands in our oceans grow at the expense of our waste. They are becoming a threat to the ecosystem, causing risks to our health and leading to economic and moral ruin.” 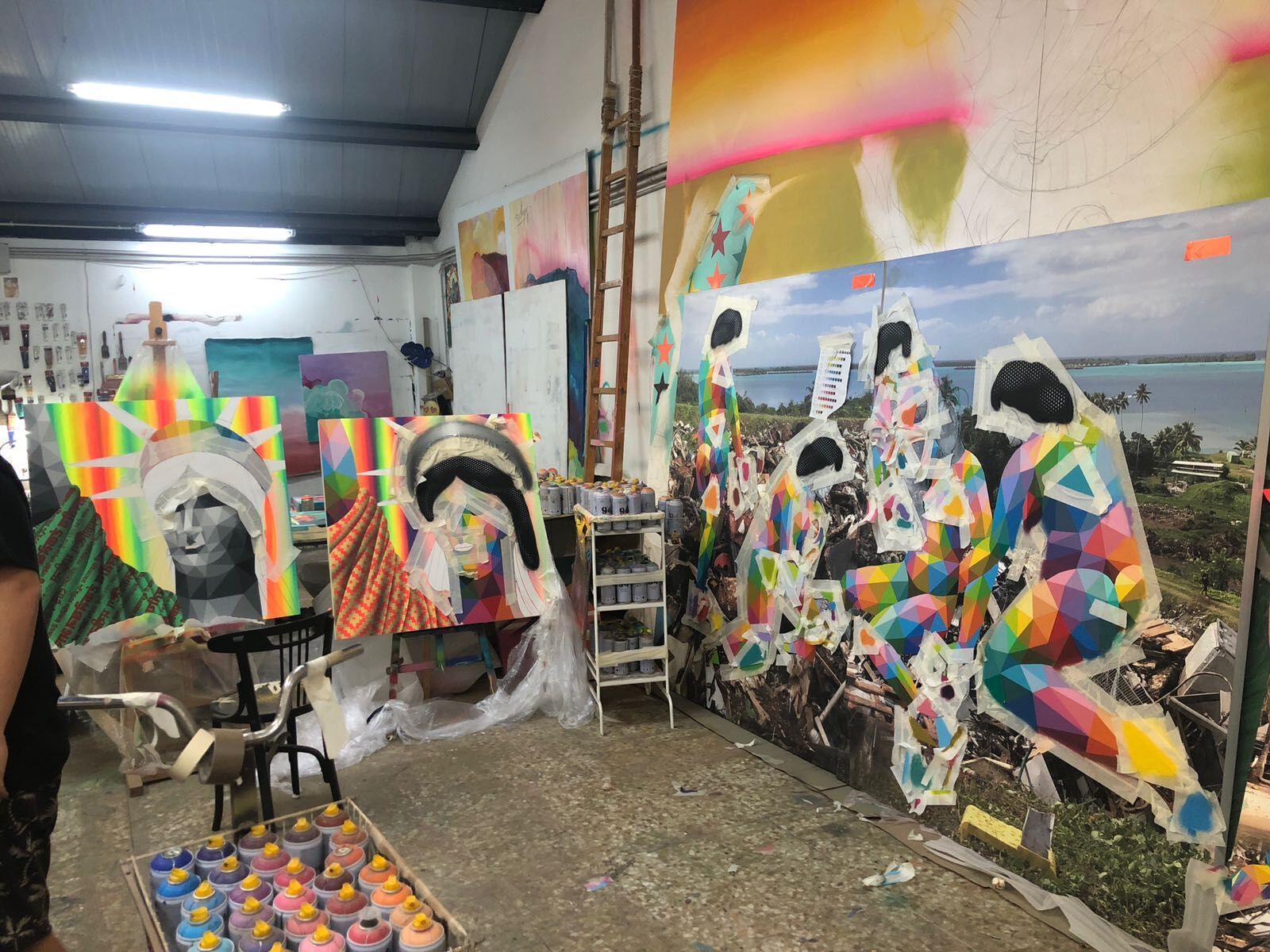 Another studio shot of work to be shown at Mirus Gallery in Denver.

His style is superbly “pop surrealist” — which means that you should consider his work an amalgam of Salvador Dali and Andy Warhol. And in working under the guise of parallel dimensions or dystopian tourist destinations, Okuda delivers profound opinions and criticisms. But, his delivery does not polarize the viewer who has preconceptions because the viewer can have few preconceptions about an imagined place. With that being said, this particular exhibition of Okuda’s touches on more pressing issues than he typically addresses and the imagined setting of The Plastic Island is far more real than first glances might suggest.

The Plastic Island will be on view November 24 until the end of 2018 at Mirus Gallery, 1144 Broadway, except on Sundays and Mondays, when the gallery is closed.

All photography courtesy of Mirus Gallery and Okuda San Miguel