[PHOTOS] What You Missed From the Chalk Art Festival 2018

–
From the massive crowd at Denver’s annual Chalk Art Festival on Larimer Square this weekend, it would seem that not many people missed a chance to witness the beauty and talent of the rare art form. Over 200 artists participated throughout Saturday and Sunday, including some recognizable Denver artists and plenty of out-of-towners.

As with any chalk art festival, there were plenty of pictures of colorful animals like giraffes, cats, whales, dogs and penguins. There were photorealistic portraits and landscapes and cartoons. There was an entire row of 3D pieces and a parking lot for high school artists. It seems like the Denver Chalk Art Festival only grows and becomes more popular with each annual celebration, and we aren’t complaining.

Even though these pieces of art don’t last long — they’re created on streets that once again have cars traveling over them — 303 Magazine attended the festival to snap photos and figure out who won the awards. 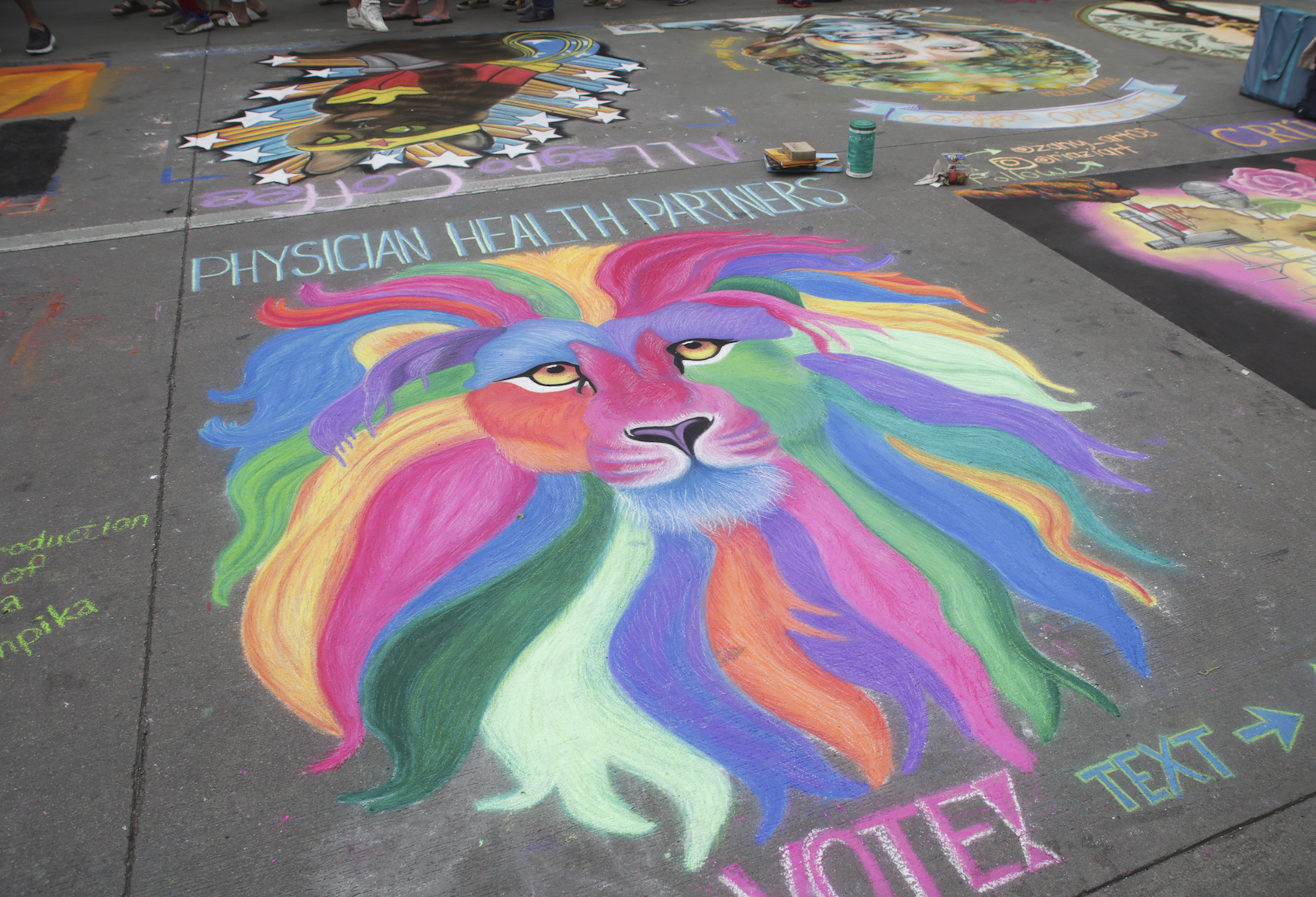 One of the first parts of the Chalk Art Festival that catch people’s eye is the rampant use of color, and Rainbow Lion exemplifies this aspect. Created by Natalie Gillespie, this saccharine beast conquered two different tactics — photorealism in the face and a highly stylized rendering of the mane. 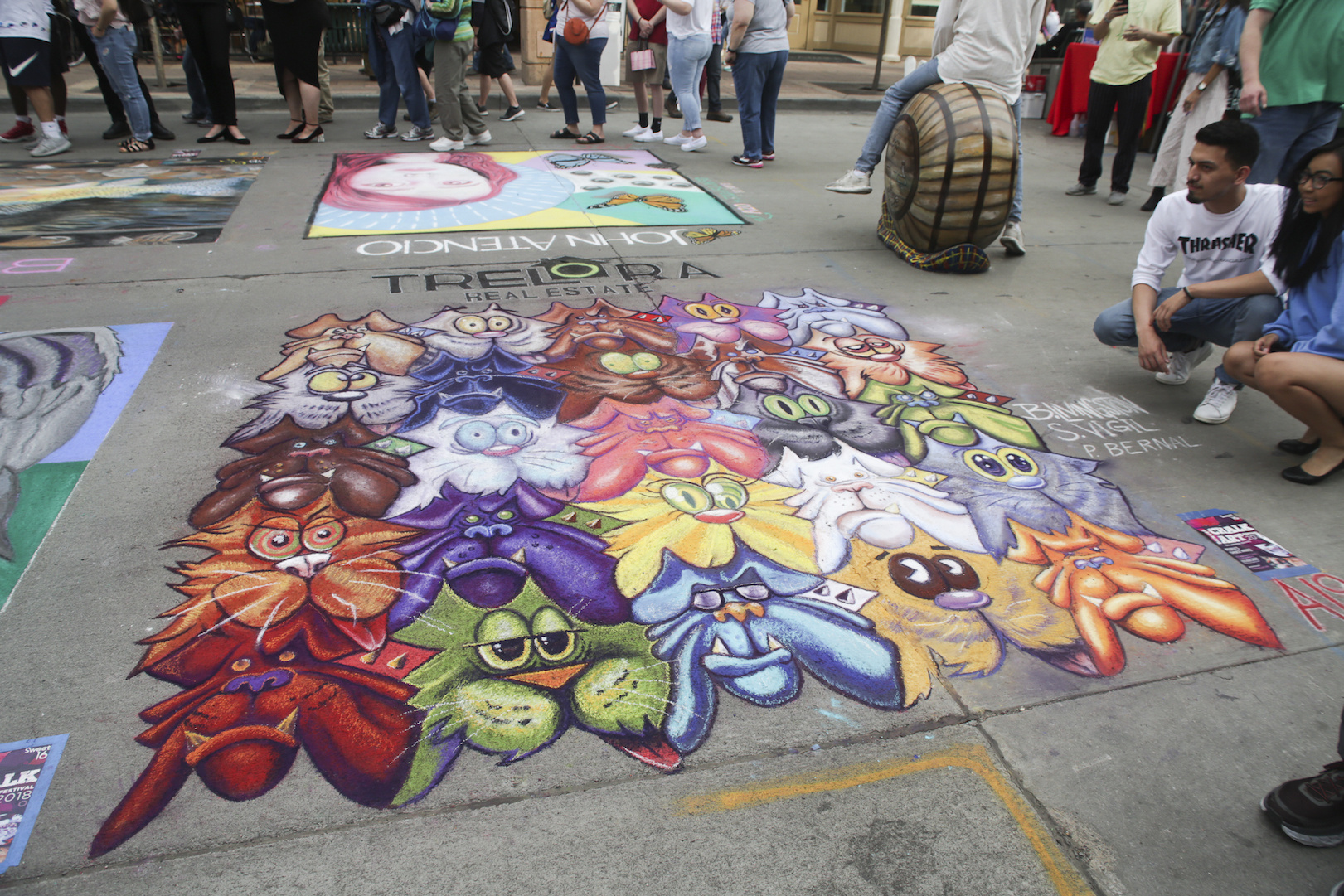 “Like Cats and Dogs” by Phillip Bernal. Photo by Emma Pion-Berlin

Like Cats and Dogs by Phillip Bernal beat the Rainbow Lion in the Best Use of Color category. Bernal’s artist statement explained that “this piece is intended to just have a colorful tesselation of strange characters.” It was easy to get lost looking at each face and imagining their own personality or story, and, of course, the colors are deep and mesmerizing.

Best Reproduction of a Master 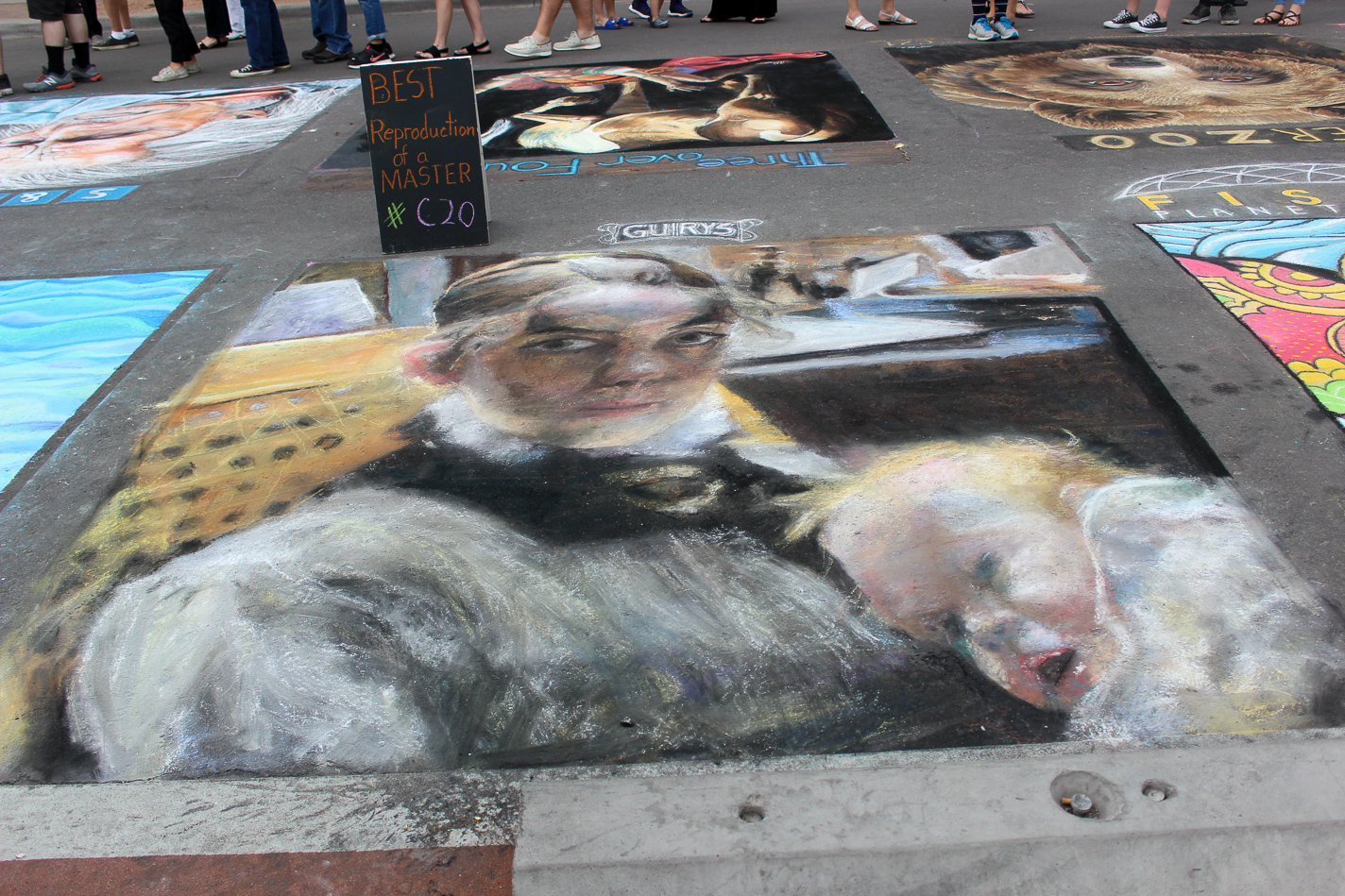 Every year, amidst the color, whimsy and cartoons, some artists make it their mission to reproduce an old Master’s work. This year, Michael Martinez created a representation of a piece by Swedish artist Carl Larsson for the win. 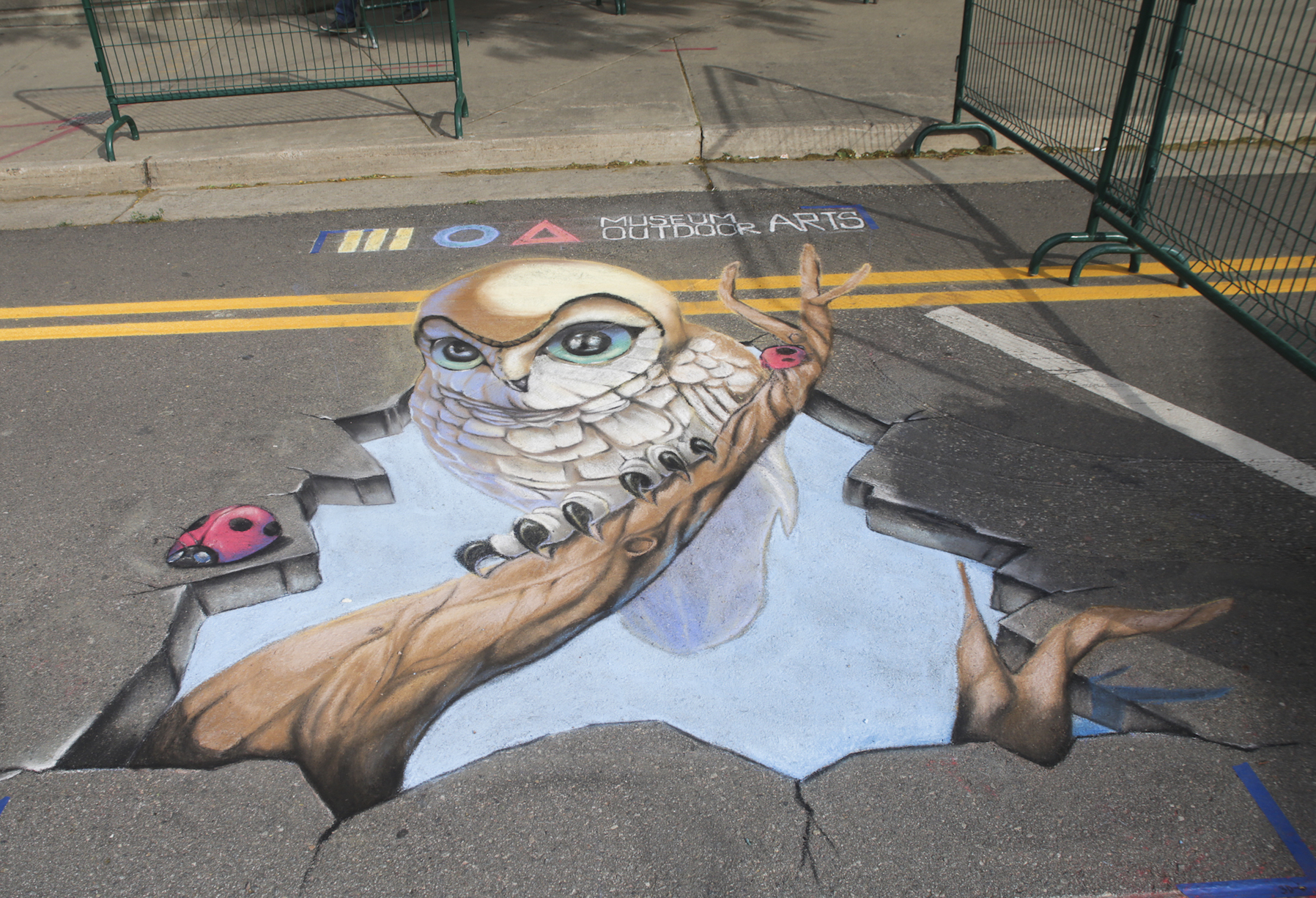 Creating 3D images on pavement is no easy task. It’s all about perspective and about skewing the image so that it appears normal through the lens of a camera. When standing in front of one of these pieces, it may look like the artist made a mistake, stretching certain areas and shortening others. But when you pull out your phone or camera and snap a photo, the image suddenly comes to life. Brad Vieira won the 3D category this year with his original and well-executed owl popping out of the pavement. 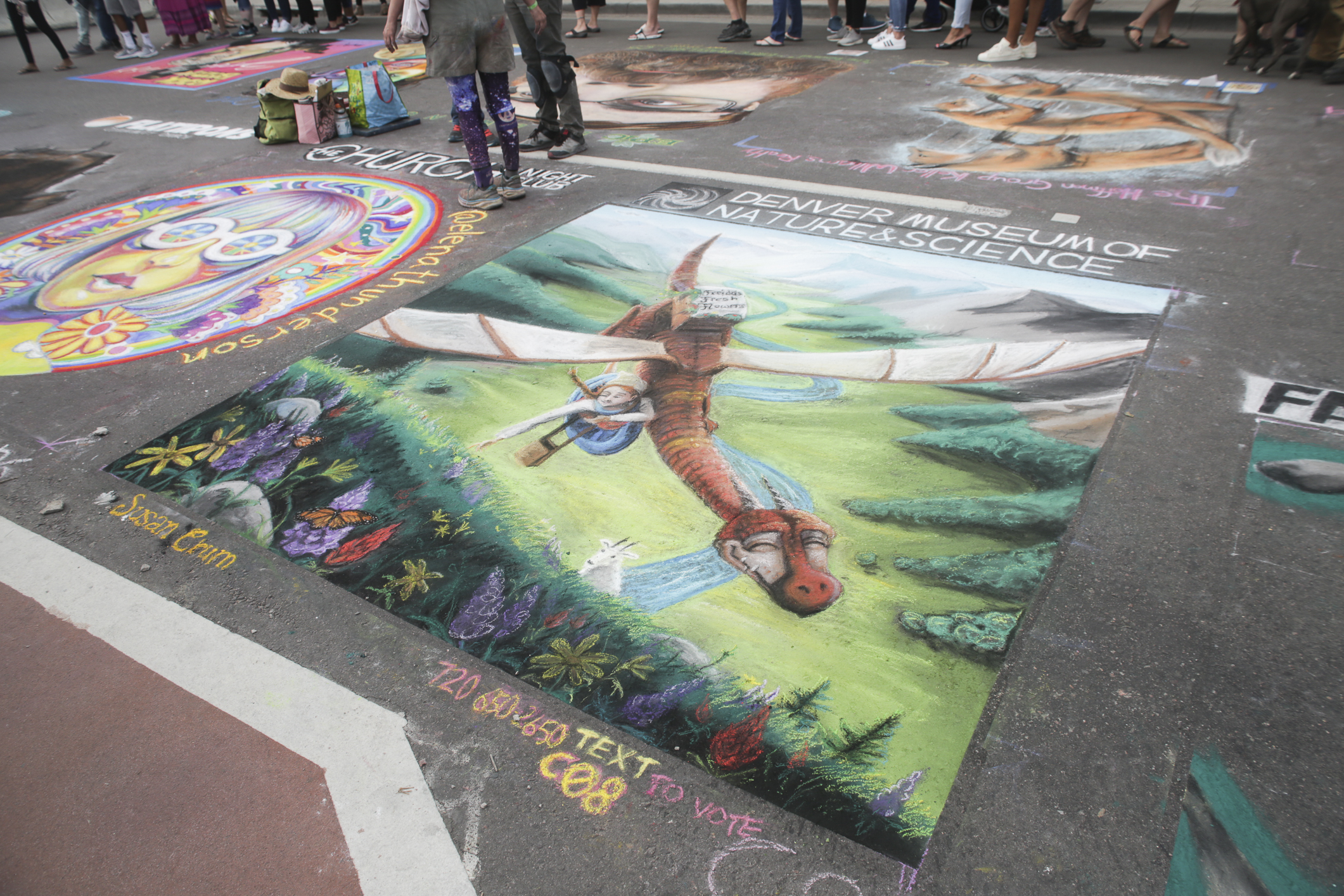 It is a testament to the lighthearted approach of the Chalk Art Festival that there is a category for “Most Whimsical.” In our opinion, this must be one of the hardest categories to judge, as so many of the plots end up with a playful image. This year, Susan Crum won the award with the help of her friendly dragon, mountain goat and wildflowers. It’s no Game of Thrones dragon, but it does show someone happily riding it — and most of us can relate to wanting to do that.

“Best in Show” is an award that takes into account the color, technique, composition and overall appearance of a piece. Unlike the other categories, this one is ranked first to third. Stephanie Duffy took home the first place prize this year, with a stunning piece of a red yak with a unique cross-hatched sky and clouds. Her ability to use chalk in such a precise way caught the judges’ attention, while her decision to use linework rather than smearing set her apart from the rest.

Editor’s note: We identified the winner’s name. It is Stephanie Duffy not Stephanie Delphi. We regret the error. 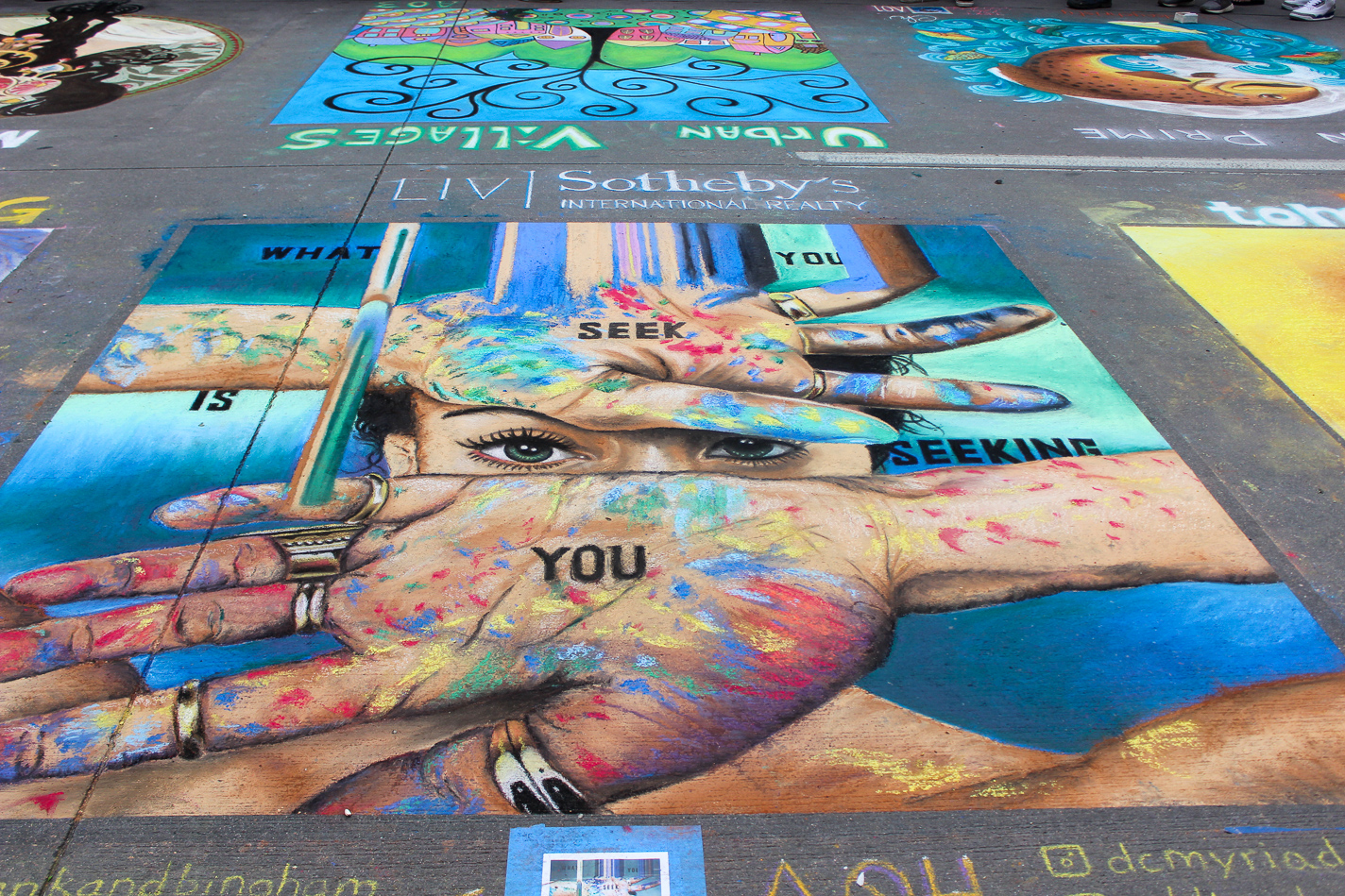 Taking the silver in “Best in Show” was a team comprised of Daniel Chavez and Eddie Huang. Both Denver-based creatives, Huang and Chavez showed the crowd and the judges that collaboration is sometimes the most powerful way to present a piece of art. Part of their success came from using mediums they are already trained in — photography and graphic design — to plan and execute the chalk piece. 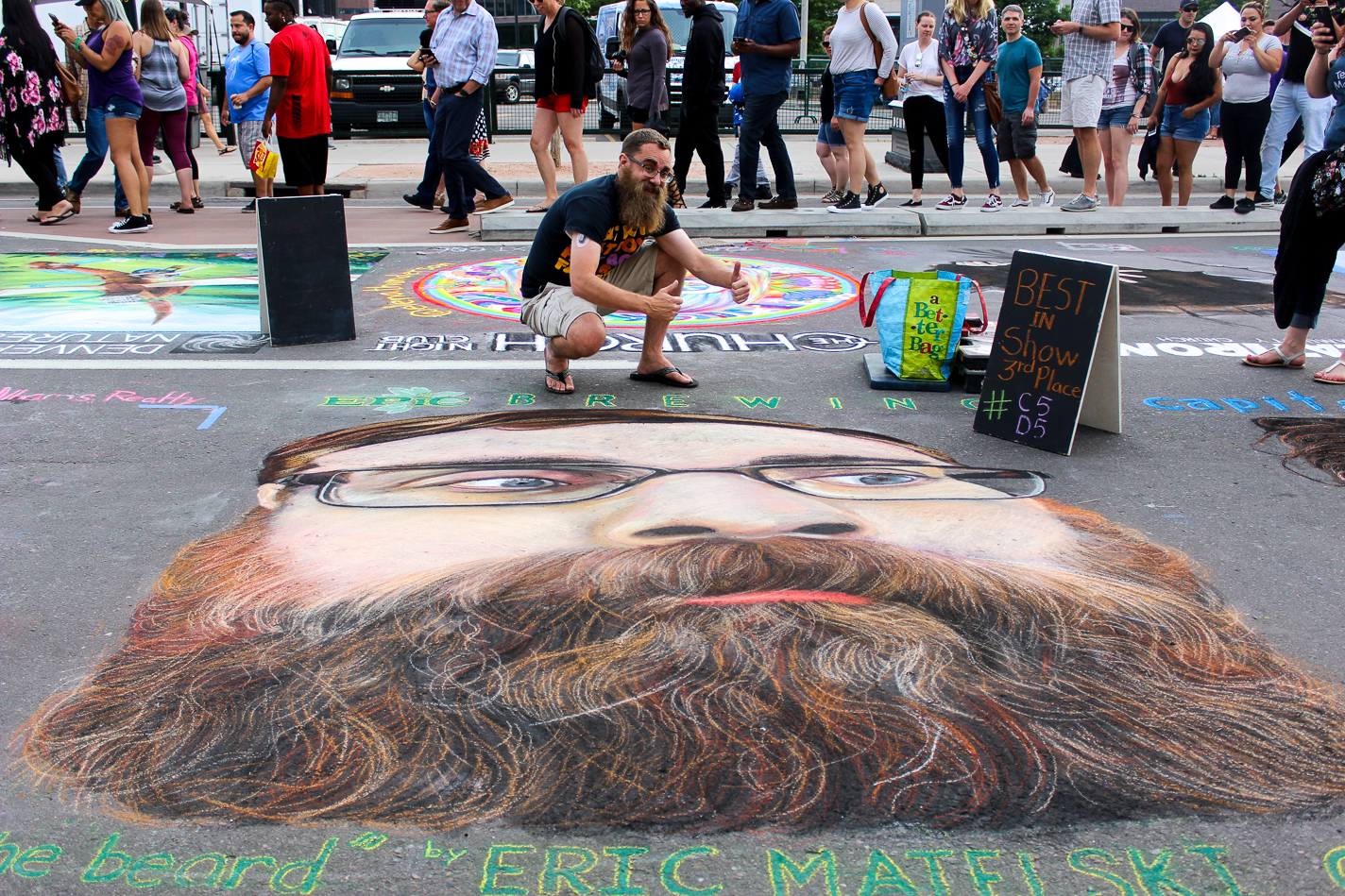 This year there was a tie for third place in the “Best in Show” category, which is unusual. But we won’t complain, especially when the two are so different from each other. “Bearded Man” by Eric Matelski was certainly a crowd favorite, and the model that Matelski painted was in attendance as well, fully bearded and willing to be photographed next to it. 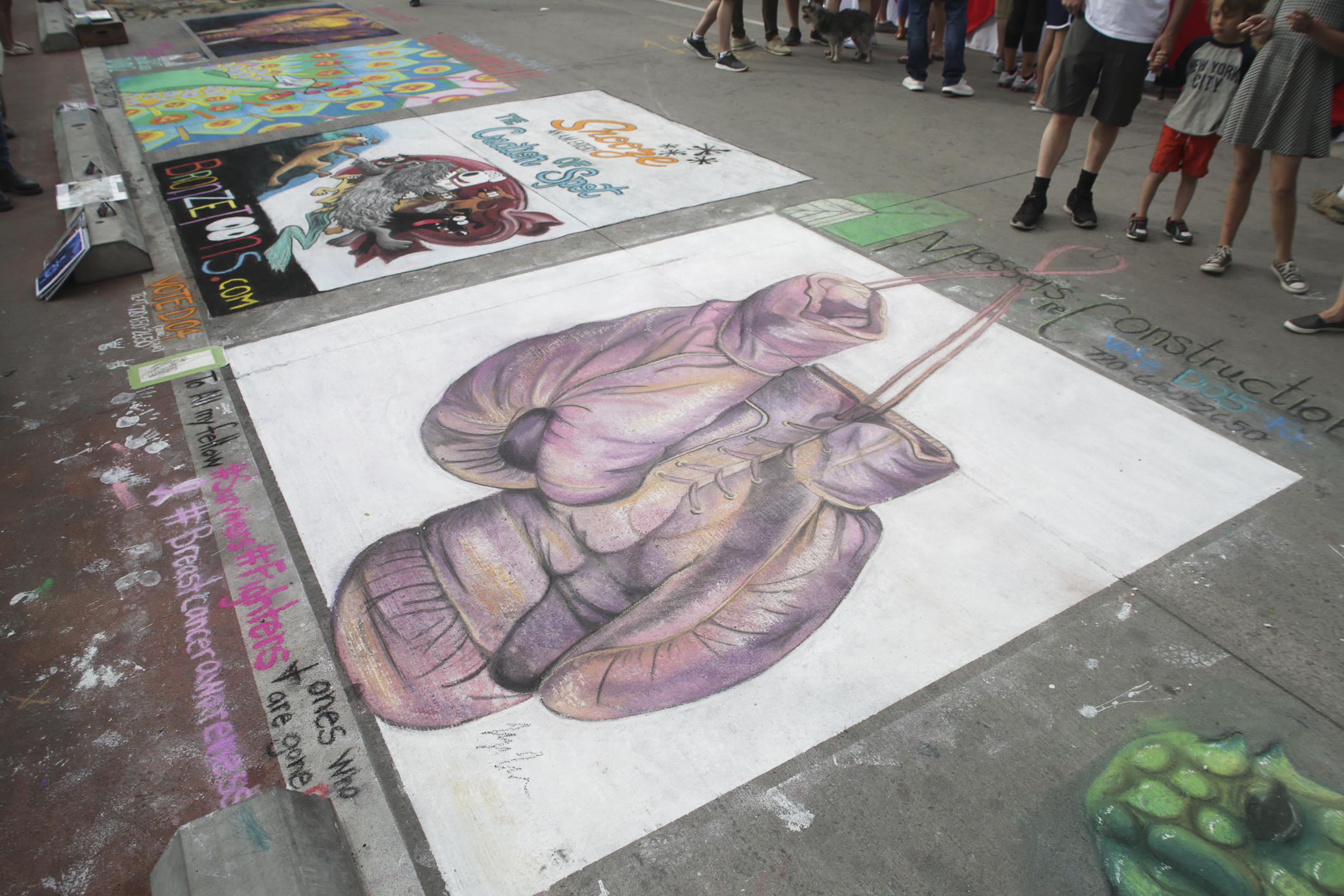 The other third place winner was created by Megan Weaver, as a tribute and inspiration to women dealing with breast cancer. Though it’s simple, with pink boxing gloves on a white background, it drives home a succinct message. Beneath the image, Weaver wrote several different hashtags like “#survivors.” 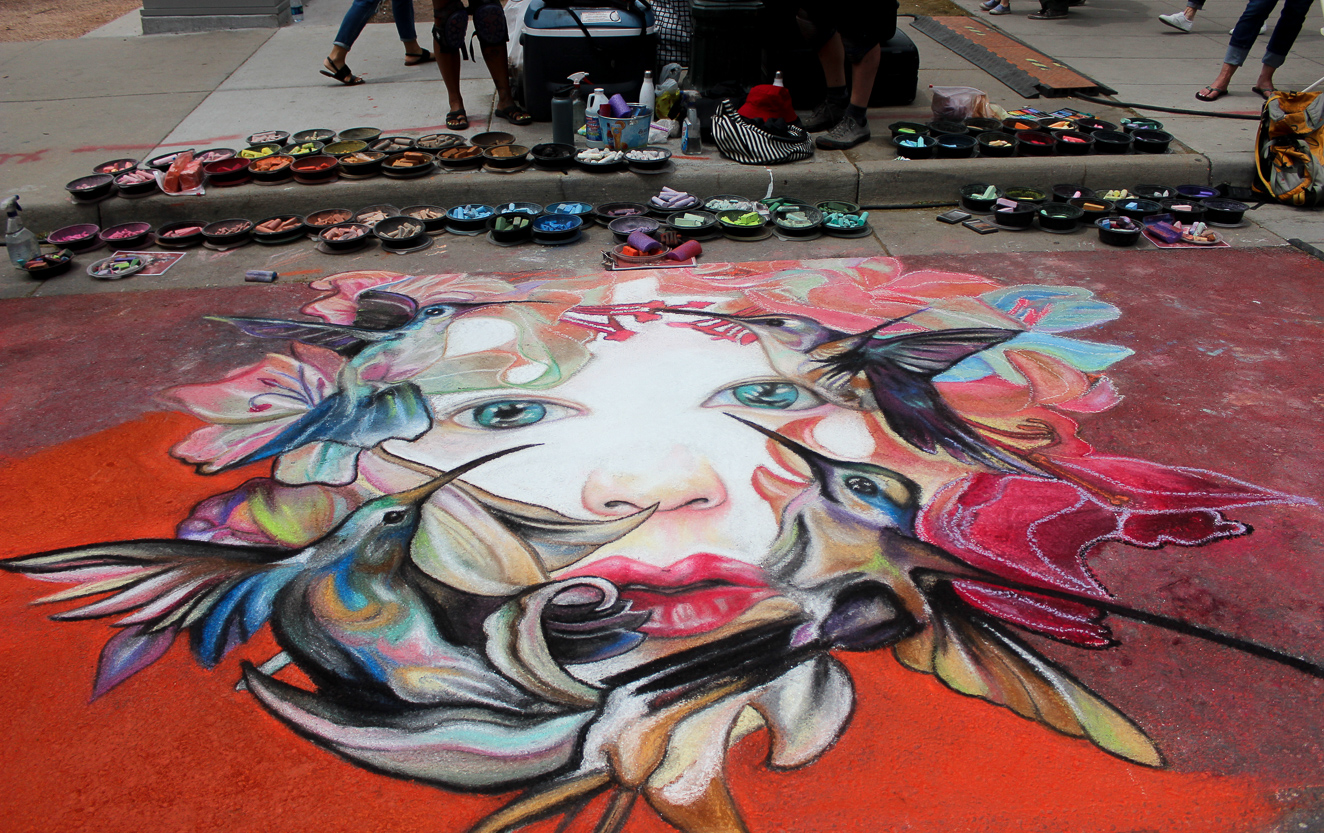 Chalk artist trio Chalk Ratz created a breathtaking reproduction of a piece originally by Marco Mazzoni. The Colorado-based team is composed of Joe Punicki, Diane Larson and Laura Thomas and they’ve been creating chalk art at the festival for 13 years together. There’s something hypnotic about their use of color (and the way they organize their chalk). 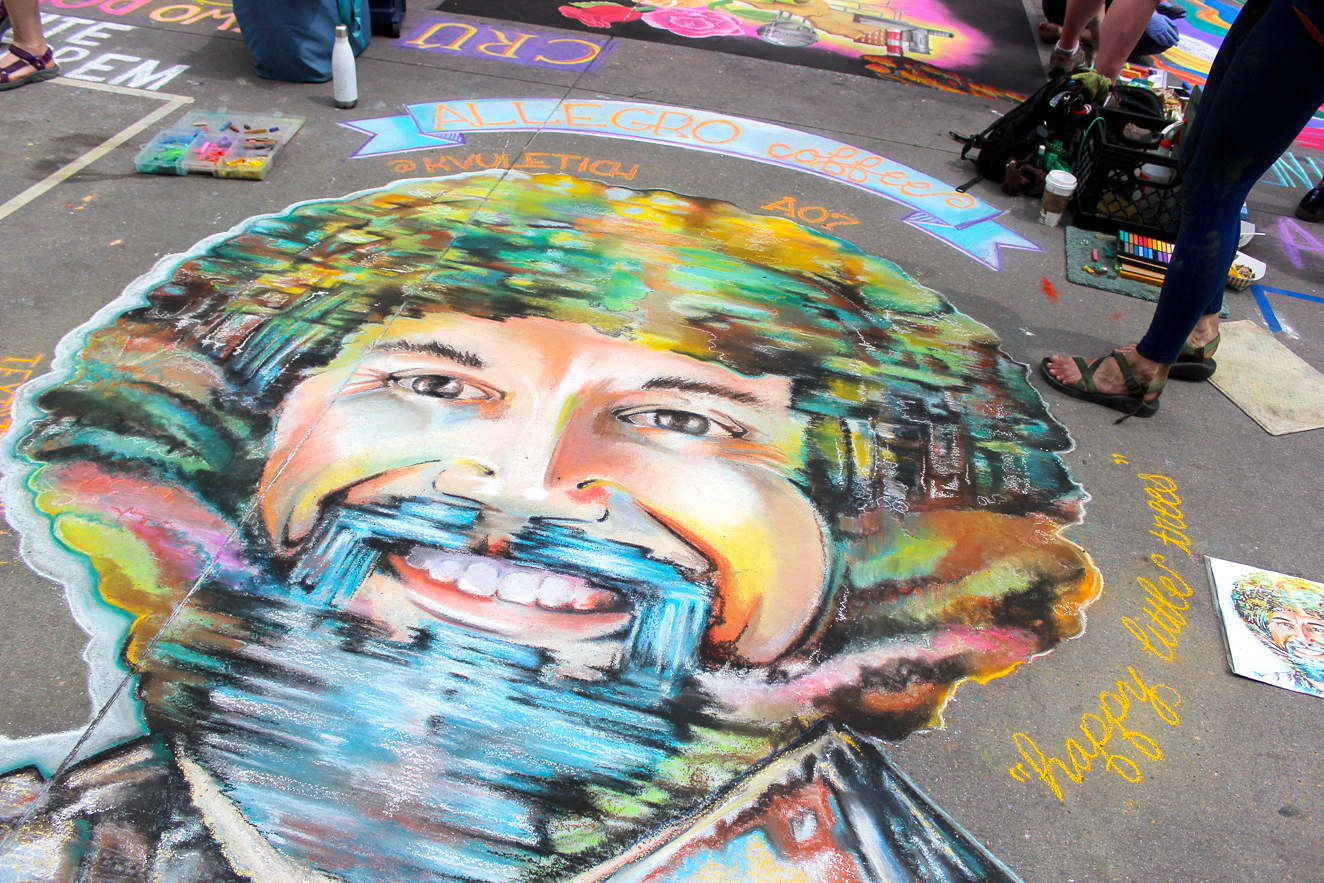 A Tribute to Bob Ross by Katie Vuletich. Photo by Cori Anderson

Katie Vuletich has participated in the chalk art festival for a few years now (and won “Best Use of Color” last year) and each year she brings her own style to the asphalt of Larimer Square. This year, her tribute to famed painting teacher Bob Ross won over our hearts. “I didn’t learn to paint with Bob Ross, I just watched his show. But I wanted to portray him because I always admired his general spirit and the way he approached art,” explained Vuletich. Adorning the outsides of Ross’ portrait, Vuletich added some of his famous quotes like “no mistakes, only happy accidents.” 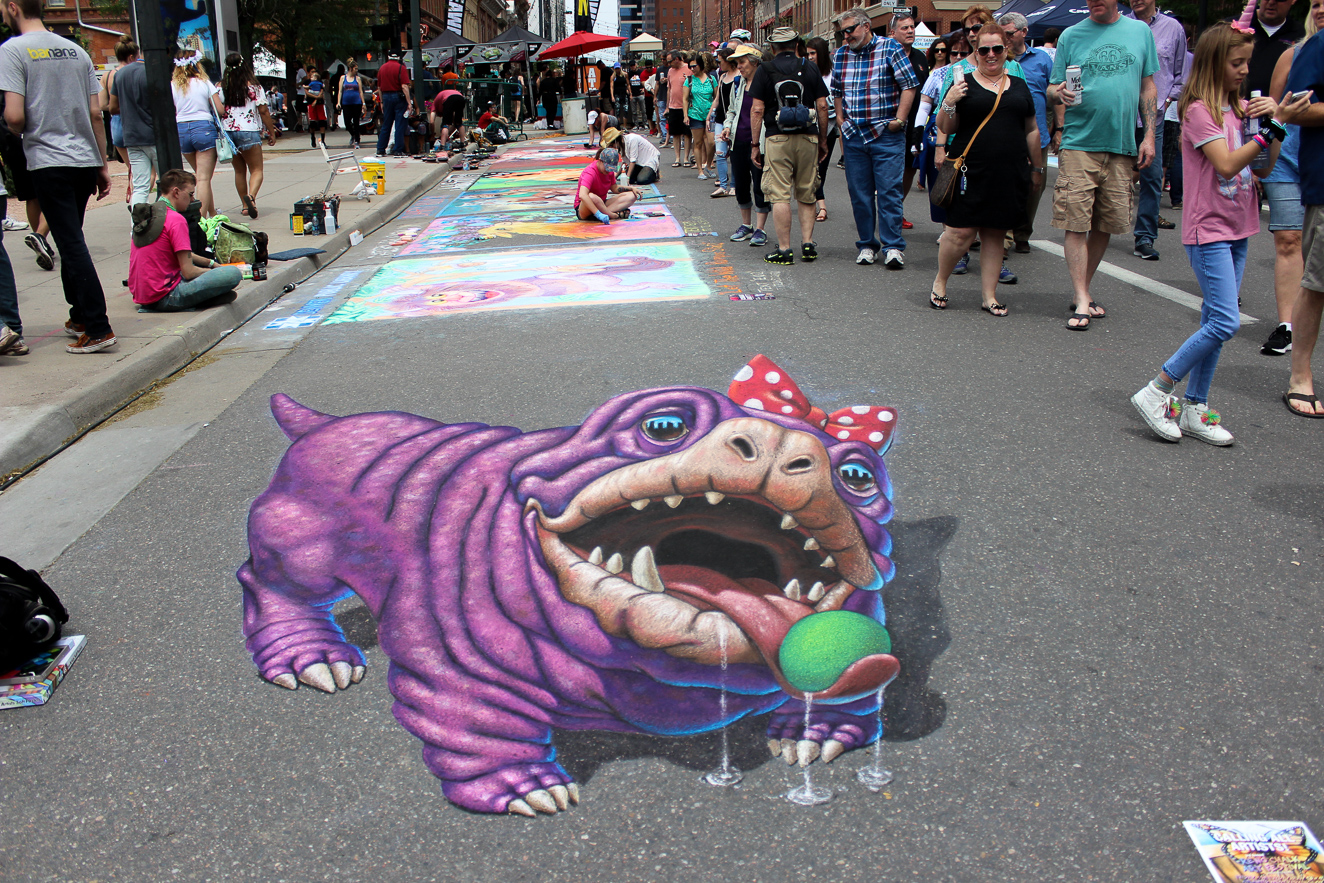 Chris Carlson is a Denver chalk artist solely dedicated to the 3D format. He started creating chalk optical illusions in 2011 and hasn’t stopped since. Last year, Carlson won the 3D category, but this year he was included as a featured artist (so he was not in the competition). As usual, Carlson delivered with a piece that not only popped out of the pavement when you took a photo of it, it also showed his sense of humor and playfulness.