Explore a Museum of Murals at The Arvada Center This Summer

–
If you think murals belong outside, the Arvada Center for the Arts and Humanities is going to make you think twice.

Its newest exhibition, In Sight On Site: Murals, showcases the work of 20 local artists in three different galleries — indoors and displayed under professional lighting. For the last three weeks, artists have painted their murals on site (hence part of the exhibition title), allowing visitors to witness their process and even engage them in conversation. Now, all of the murals are complete — filling the galleries with color, character and diversity — and the opening reception is on Thursday, June 28 from 6 to 9 p.m.

Curated by Collin Parson and Kristin Bueb, In Sight On Site is the kind of show that changes minds. It doesn’t try to persuade the viewers about any certain message or theme but rather forces preconceived notions about murals to be reevaluated. Changing minds wasn’t only saved for the viewers — according to Parson, some of the artists were surprised or honored by his invitation. Many of the artists primarily work on exterior walls in their normal practice, making this an interesting challenge for them — including the ban on spray paint (it is indoors, after all). A smaller portion of the artists usually work in studios or on smaller scales, making this a different kind of challenge for them. Overall, the collection shines a loving spotlight on the assortment of talent Denver possesses when it comes to murals. 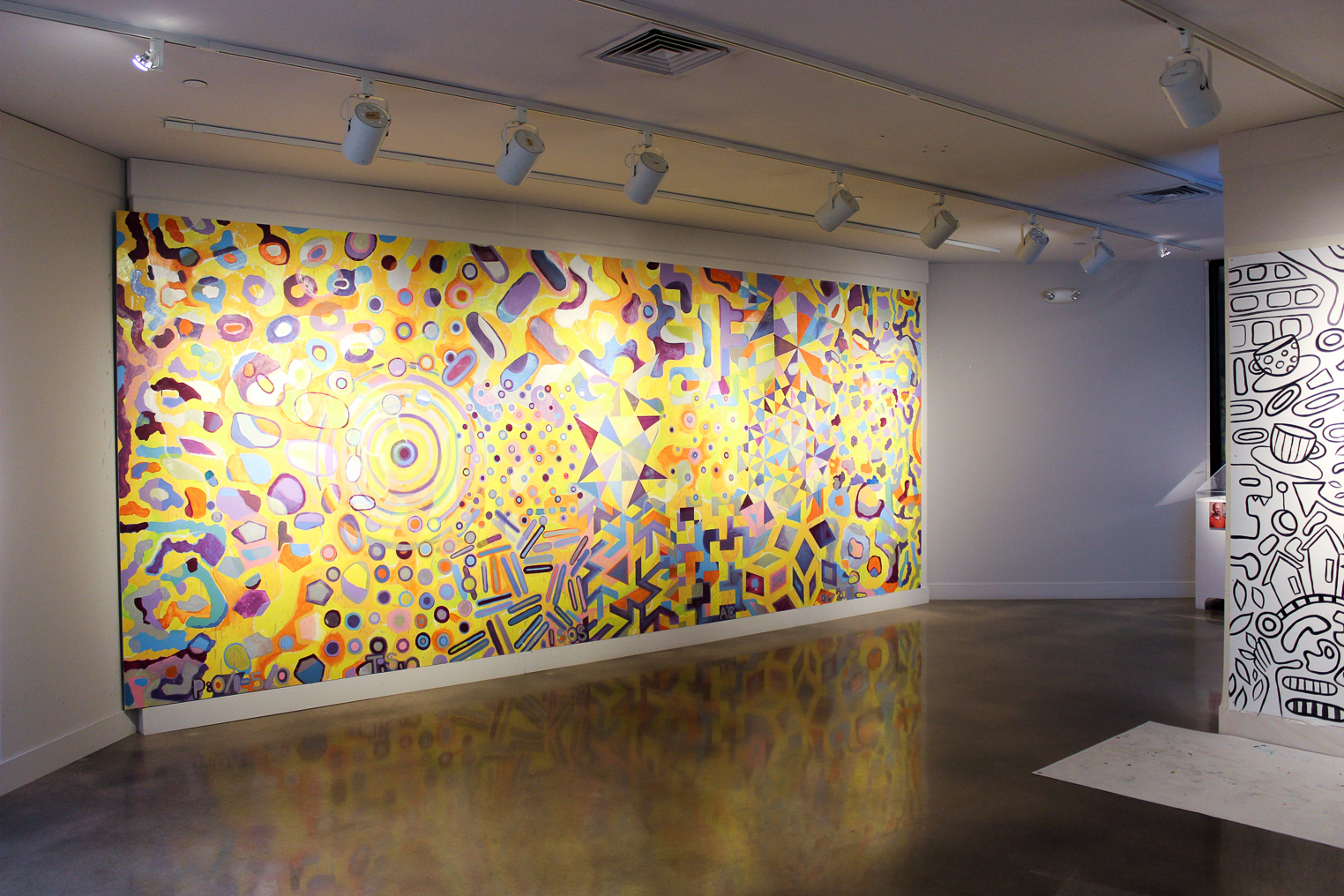 In the Main Gallery, on the ground level, the exhibition welcomes viewers with a unique vantage point that encompasses most of the murals on display. Using a few portable walls, the curators placed each mural so they command their own space and yet complement each other too. The first to the right is Thomas Scharfenberg with a five-panel kaleidoscopic mural that emulates what he finds much of his inspiration in — found and salvaged materials and color patterns. Scharfenberg — who grew up in Arvada — is a renowned muralist in the Front Range who spent time at Rhinoceropolis before it closed and has street art scattered across the city. This particular mural of his is both hypnotic and distracting, meaning that every time it’s in your periphery, you might feel the need to steal another glance.

To the left is another Thomas, Thomas “Detour” Evans — another prominent and influential street artist in Denver. Recently, Evans has focused more heavily on indoor installations that use sound and interaction, in addition to painting his normal bright colors, and this one falls into that category. By engaging onlookers, Evans allows them to relate to the mural in unexpected ways. Next to Evans is Korri Marshall, a resident at Arvada Center working in the theater set design department, who created a mural with a 3D element. 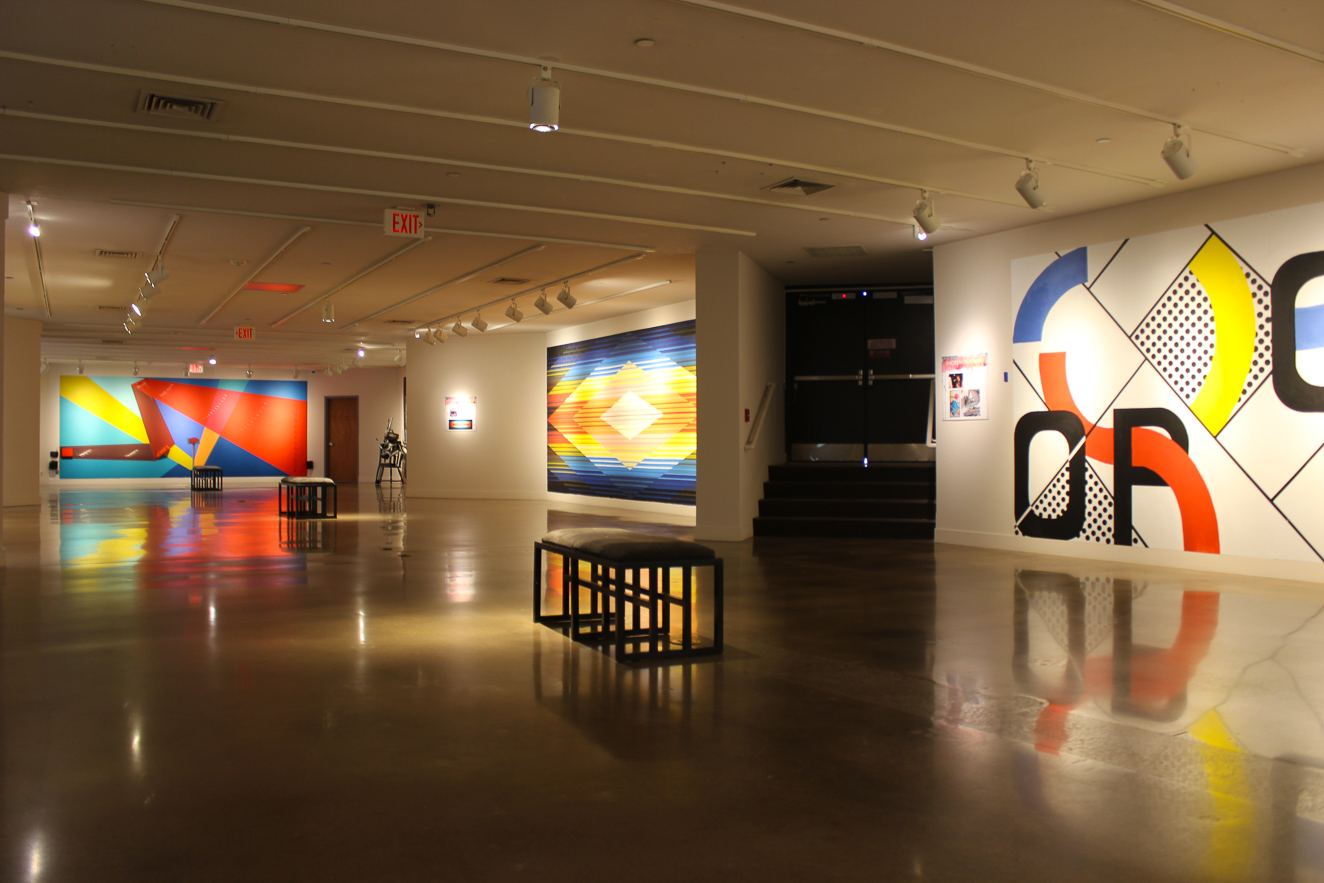 Walking further into the Main Gallery brings visitors face-to-face with work by Patrick Kane McGregor and Anthony Garcia Sr., hanging on opposite sides. Both represent their own distinct styles — Garcia Sr.’s geometric pattern made of primary-colors and McGregor’s photorealistic portraiture. With one bench in between the two, it’s easy to sit and look back and forth at these two works that are masterpieces in their own way. Garcia Sr.’s stands out from the rest of the murals partly because he used faux-brick board — instead of the flat wooden panels everyone else painted on — to accurately represent a typical exterior wall. He didn’t stop there, however, because in order for it to feel like any other day “at the office” he tagged the wall, had a friend add a wheatpaste to it, tore that wheatpaste off and then painted over all of that — just as a base for his mural. 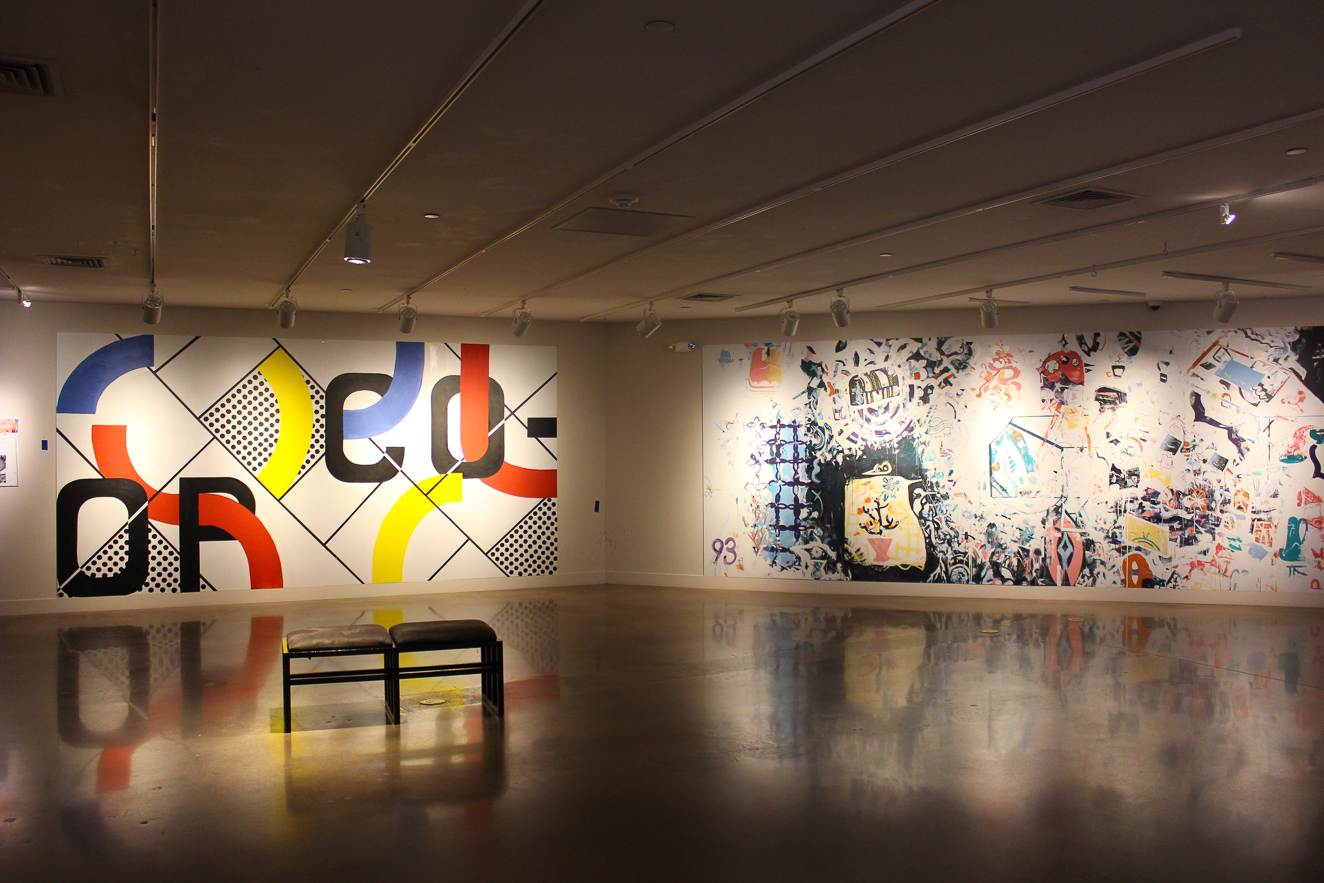 One more alcove beyond that and the works of Andrew Hoffman, Max Kauffman and Heather Patterson offer viewers a more contemporary and abstract atmosphere. Hoffman owns his own screenprinting and illustration practice, is a professor, a creative director of Beanstalk Digital and still manages to paint murals, like the one here. The sharp lines and balanced composition gives away his background in design and screenprinting and it directs the viewer’s focus across the piece in just the way Hoffman wants it to. Kauffman’s piece contrasts Hoffman’s by feeling more handmade than computer generated.

Kauffman said of his piece, “I treated the piece more as a studio painting, and spent time on it the way I would in a studio. Probably 40 hours total went into this — honestly about the same time I’d normally spend on a piece half this size. I hope I can continue pushing this more ‘painterly’ side of mural creating in the future.” 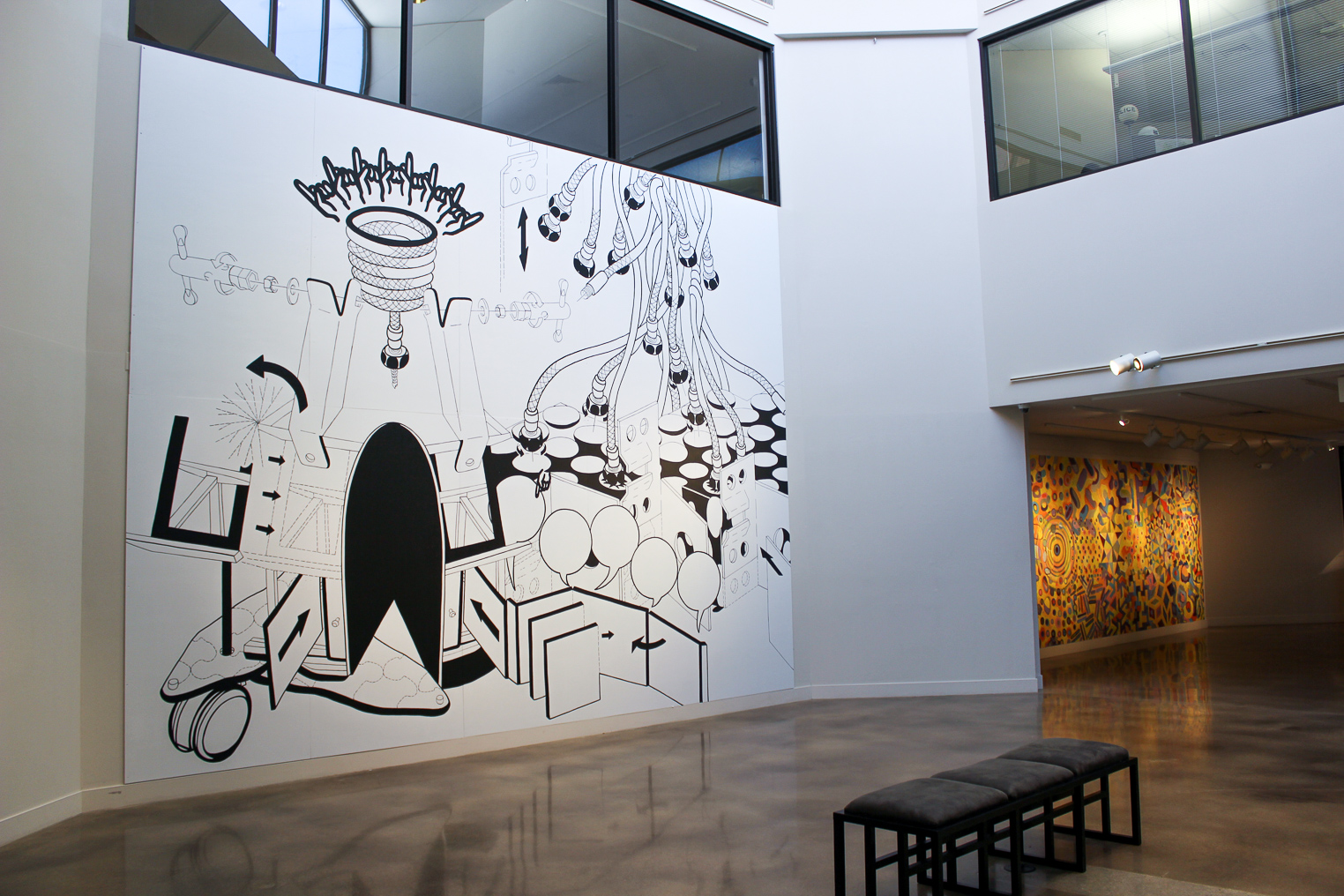 The last two artists in the Main Gallery are Charles Parson and Jessica Forrestal. Parson is, in fact, related to the curator Collin Parson (it’s his father) — but the reason he’s included is that Collin’s inspiration for the show came from him and the story of a mural very similar to the one Charles displayed in this show. Spread over several panels, Charles painted a grayscale mountain range with a disembodied eye in the middle. which gives his mural the appearance of a stylized dollar bill, though any good Coloradan will surely find a way to relate to this one in other ways, too.

Forrestal’s piece, opposite of Charles’, dominates the room and the gallery as a whole. Instead of one panel in height, she’s used two and the scene she’s painted is a humorous and perhaps biting fusion of a Rube Goldberg machine and IKEA furniture directions. 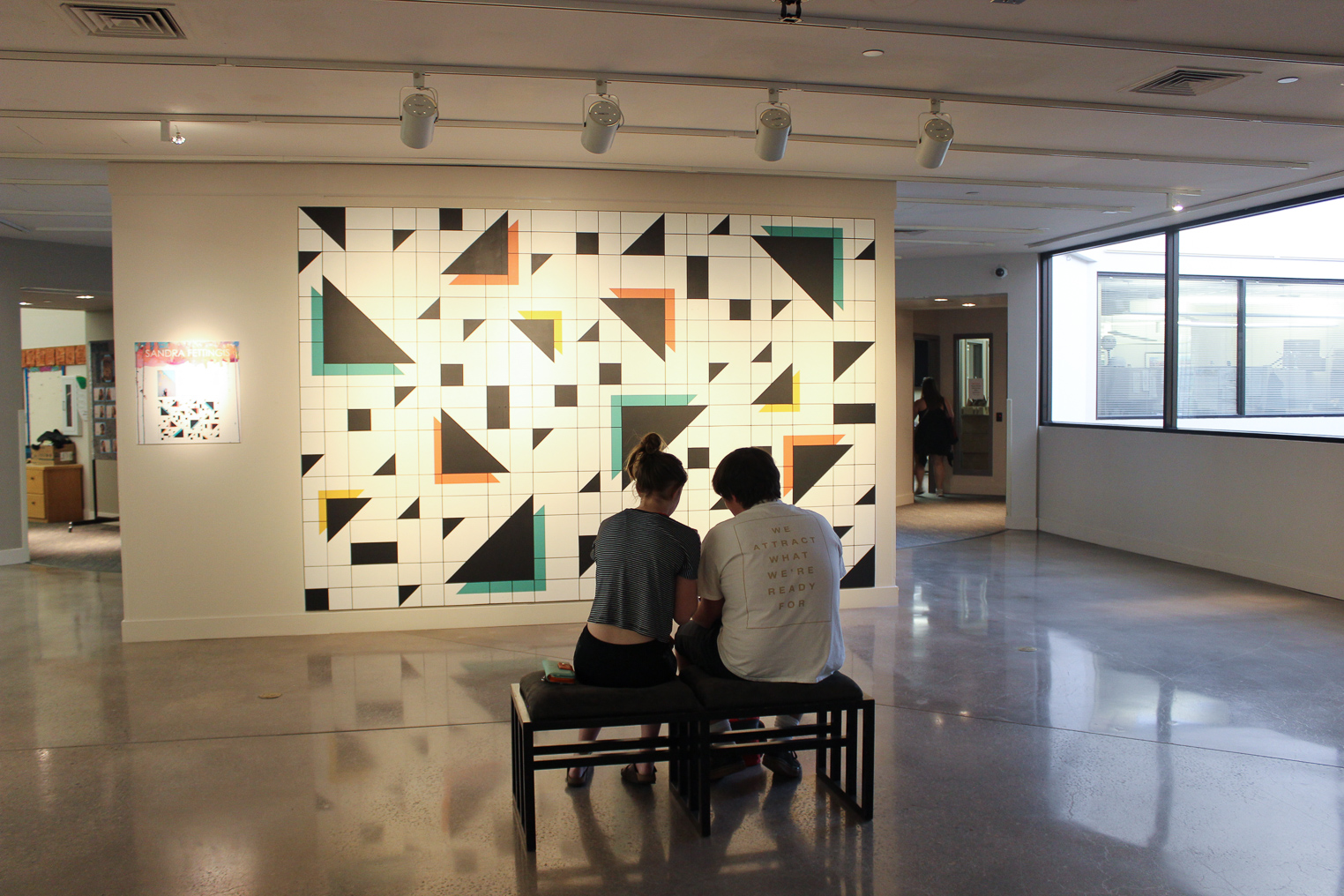 Don’t leave after seeing the Main Gallery or else you’ll miss out on more than half of the show. The Upstairs Gallery shows the murals in a different light — brighter, cooler in tone — but the beautiful mirror effect from the polished concrete floors is the same. First up is Sandra Fettingis — local street art sweetheart that has accessorized buildings like Denver Central Market in RiNo and Center for Visual Art in the Art District on Santa Fe with her geometric paintings. Behind her piece is one by Ramón Bonilla, and though Bonilla doesn’t have the same experience Fettingis does when it comes to large-scale murals, their styles pair quite nicely. Both use limited color palettes, sparse geometry and accentuate negative space.

Next is another heavyweight in the Denver street art scene, Jaime Molina, who painted a mural with his truly iconic and memorable characters and choice of colors. With work currently in the Denver Art Museum, murals all over Denver’s exterior walls and inside some businesses, Molina is a muralist in high demand. But, without him, a Denver mural artist show would feel incomplete. Next to Molina is Tony Ortega. Though Ortega is a talented muralist himself, he created a ‘curriculum’ for a summer camp to paint the mural on display in this show and to teach those students some of his hard-earned talents. 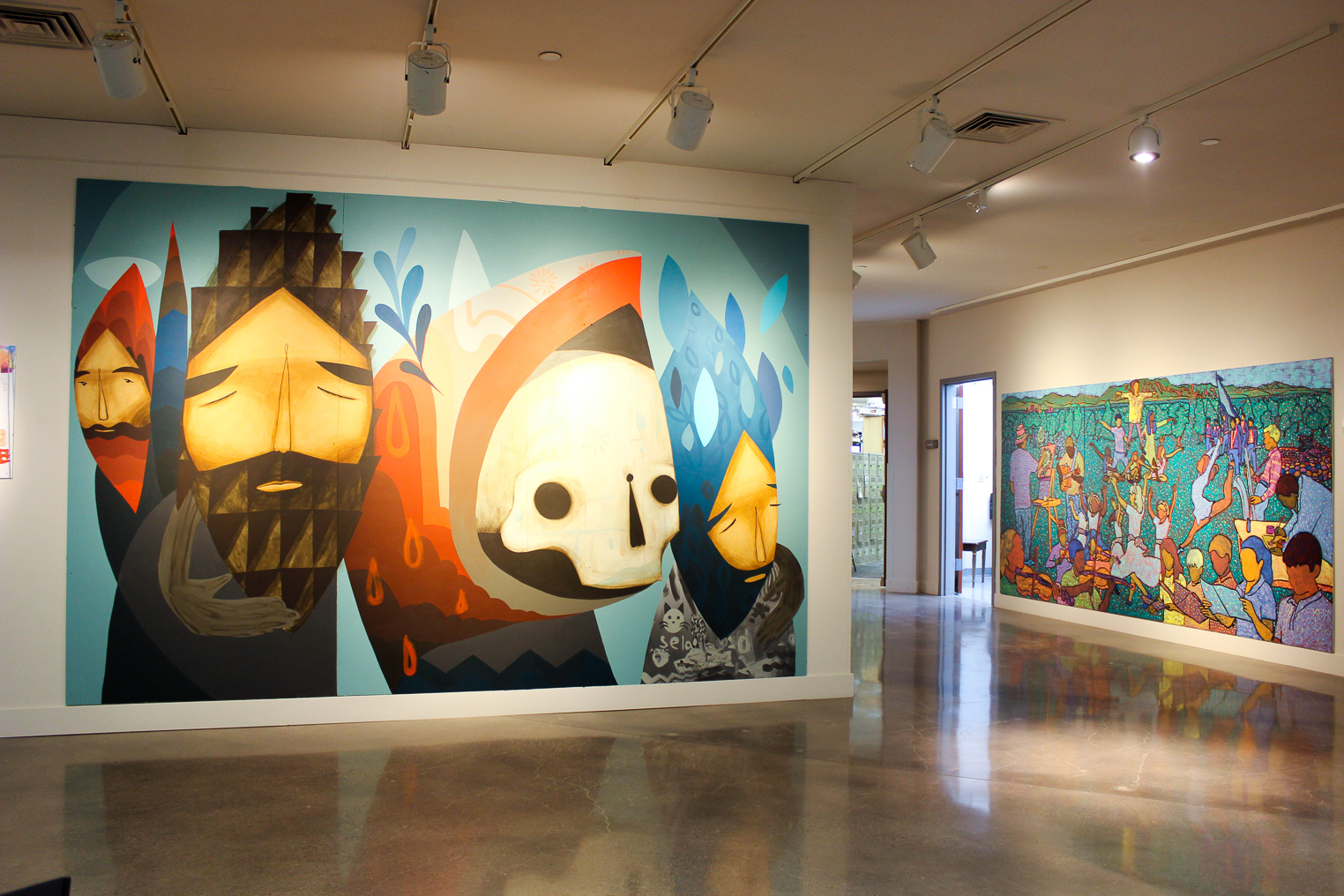 The other mural painted in a team effort represents a historic side of Denver and also a timely story to tell, by Los Supersonicos. Consisting of well-known local muralist and installation artist Carlos Frésquez (with a current installation in one of 16th Street Mall’s alleys) and Francisco Zamora, Los Supersonicos created a tribute to the first Chicana muralist in the US by emulating her style while also highlighting some heavy Chicano symbolism.

Denver is sometimes considered the source for the American-Chicano movement that sparked civil rights activism nationwide in the ’60s and ’70s — and Frésquez grew up entrenched in that. Zamora, raised in Mexico, comes from a different understanding of the movement, but contributes in his own way. Together, Frésquez and Zamora enjoy a deep-seeded camaraderie that allows them to tag-team a mural with skill and expertise and still have fun while doing it. 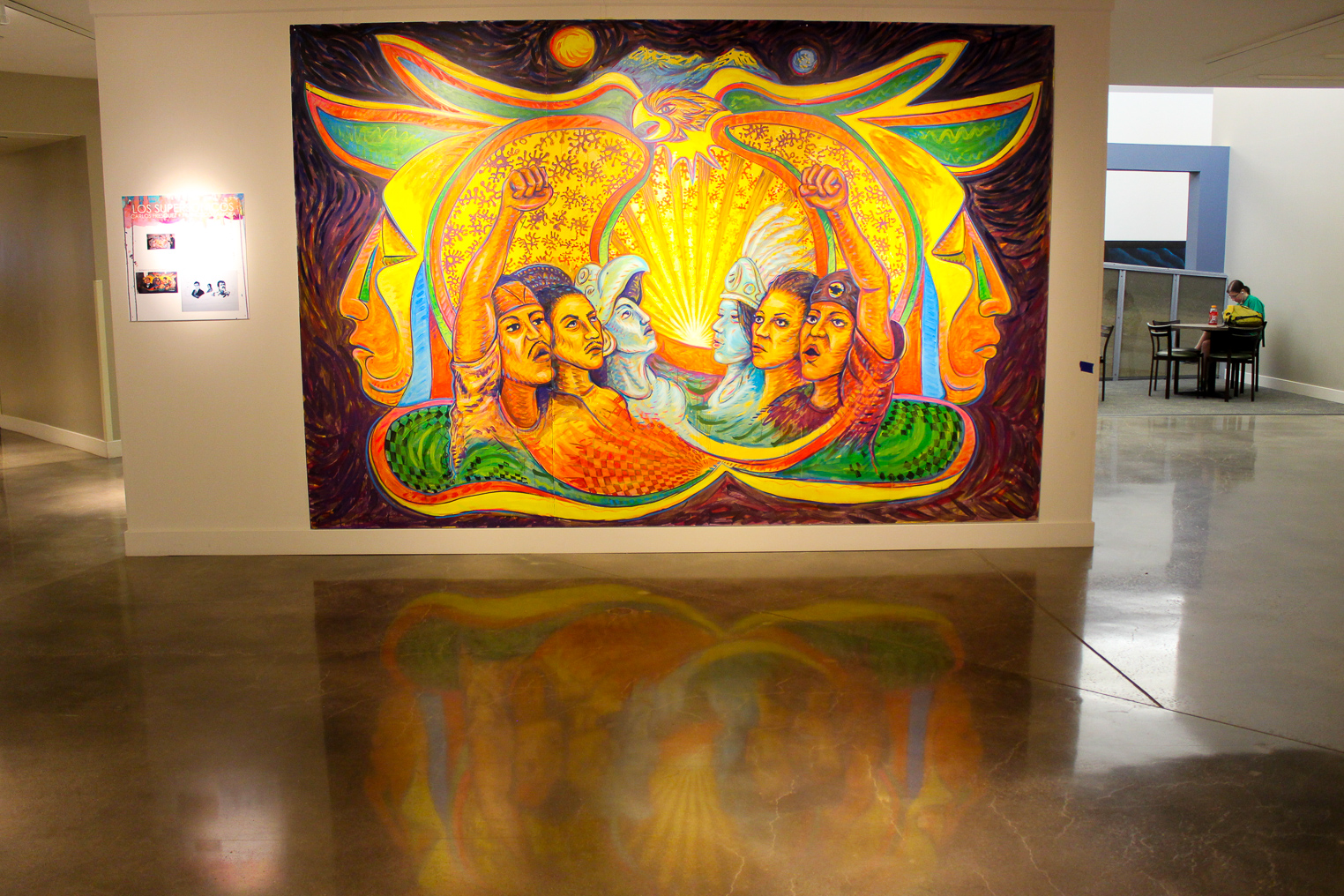 The last two in the Upstairs Gallery are Sabin Aell and J.C. Milner. Aell is originally from Austria but is now in the Mile High city and represented by Walker Fine Art, making her one of the fewer non-exterior muralists in this exhibition. Much like Fettingis and Bonilla, Aell appreciates negative space though she differentiates herself by using more organic forms and shapes. Milner is an artist from Fort Collins who used personal and probably traumatic experiences as the inspiration for her mural, which portrays a cartoon-like woman barely balancing three large, pink pills. There’s something brilliant and bizarre about using a style that is childlike in its whimsy but still steeped in the struggles of adulthood. 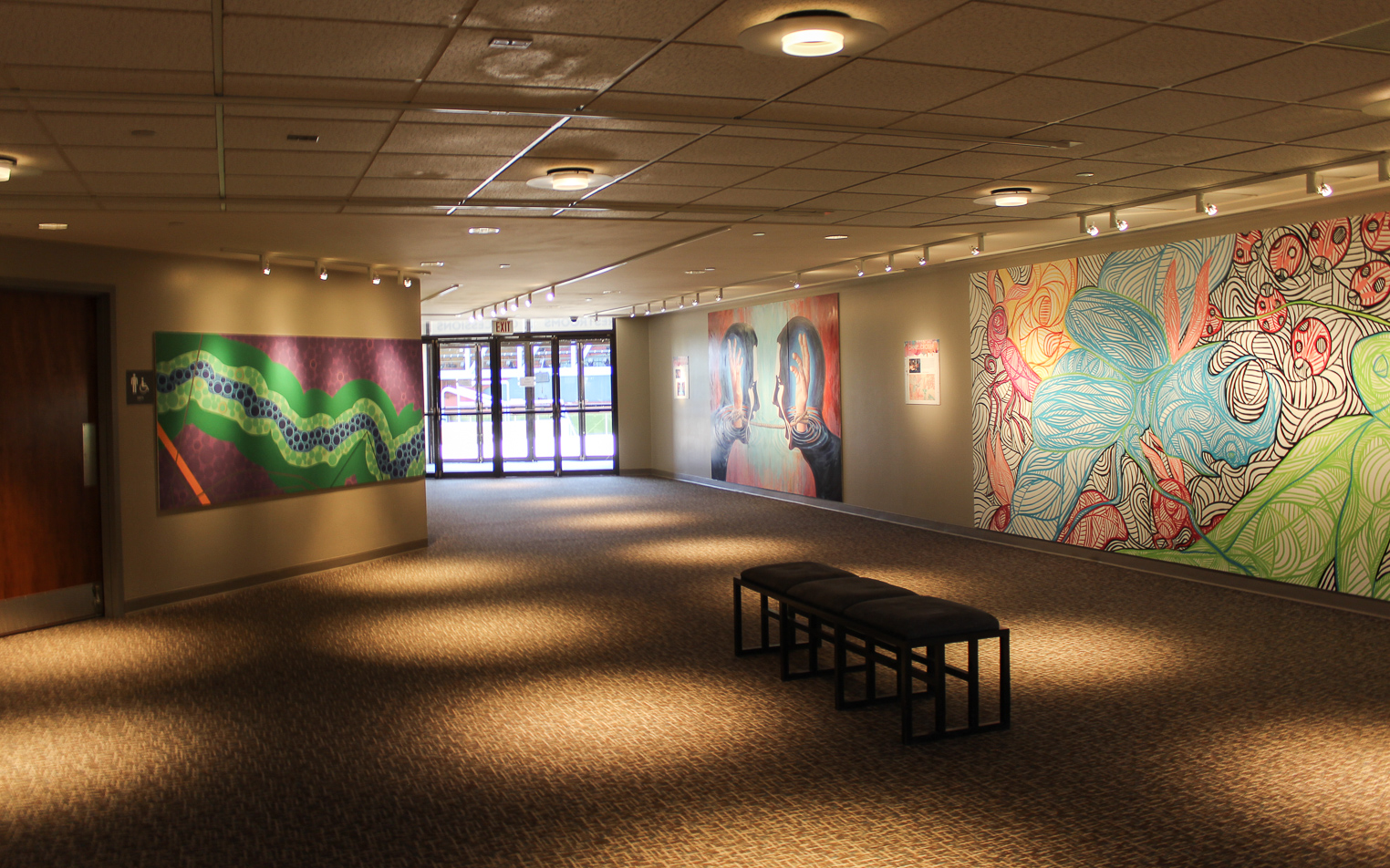 Though the Theatre Gallery does not have the polished floors of the other two galleries, it does contain four murals that complete the In Sight On Site collection. Daniel Crosier’s piece greets visitors immediately, mesmerizing with its tangled lines and familiar subjects that he paints exclusively with a single brush. Crosier added more than a little playfulness to his piece, painting a pair of pink bunny ears on every single creature — including the ladybugs.

Next to Crosier is Mark Penner-Howell, another in the minority as a gallery-based artist in this show. Penner-Howell has never painted on this scale before, but that challenge suited him well. Some of the finest detail is drawn in colored pencil rather than paint — a testament to Penner-Howell’s attention to detail and desire to emphasize the personality and individuality of the hands.

Sandi Calistro painted a mural inspired by her wonder of nature, showing a fairy-like creature with breathtaking eyes. Calistro hones her artistry regularly by tattooing and painting, with several murals spread across Denver that she’s completed since she moved here from New England. Finally, Fort Collins painter Amelia Caruso composed two panels that are horizontal and separated by a door, presenting an aerial (and abstract) view of the Poudre River. Her use of individual circles of similar colors gives the impression of looking at a specimen under a microscope, but realizing it’s representing something grand — like miles of a river — gives the viewer an ‘aha’ moment. With only a handful of colors and even less shapes, Caruso expresses an idea that people spend pages trying to explain in words — that everything is connected and the difference between the smallest molecules and the planet’s ecosystems are not as big as we think.

All of the murals are painted on detachable wooden (or faux-brick) panels that will be for sale and can be taken out of the galleries after the summer to hang somewhere else. Two to three-minute videos that show the artists at work (in a time-lapse format) with sound clips of them talking about their process or inspiration is available for viewers in the Main Gallery.

In Sight On Site will be on view until August 26, 2018, at Arvada Center for the Arts and Humanities, 6901 Wadsworth Boulevard, Arvada.