–
It is the duty of artists and creatives to question norms and tackle the status quo. For centuries this revolutionary spirit has fueled artists from Bernini to Pablo Picasso to Frida Kahlo and Andy Warhol. More recently, street artists like Banksy or MissMe lead the charge. Not only do these individuals hold a mirror up to society, culture or governments, they also find ways to change the process and techniques of art, sometimes much to the chagrin of established art institutions. So when a local, emerging artist decides to walk this path — like Abram “Aleo” Bebo — we, as art lovers, should take heed. He may not be ripping out the seams of the local art scene yet, but his first solo exhibition at Spectra Art Space, Pixel Pigment, is a brave step in that direction. 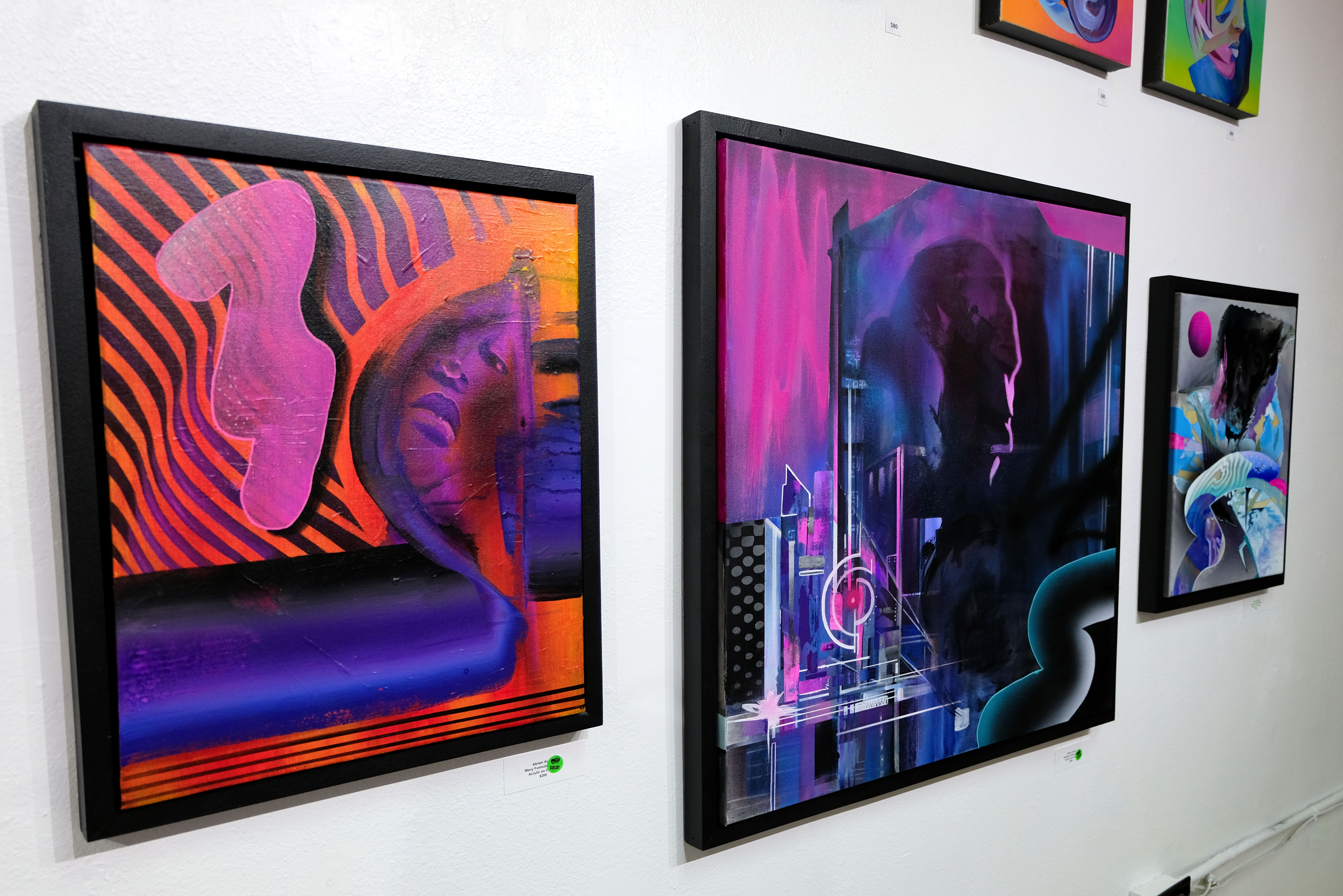 Bebo grew up in Fort Collins and has practiced art in the Front Range since 2013, landing a job at the design and apparel company Threyda a few years ago. Some of his more notable experiences range from painting murals at Sonic Bloom and the Big Wonderful in 2016 to participating in CRUSH for the last two years and live painting in Meow Wolf’s Santa Fe exhibit this year. But what makes this show different, aside from that it’s solely showcasing him, is that he threw out his own inhibitions about how painting should be done and instead used the many tools now available to augment images — like Photoshop.

Before judgment is doled out, it’s important to note that all of Bebo’s pieces in this show are handpainted. His use of Photoshop exclusively helped in the design and conception process, where he layered photographs and other images to actualize new patterns and shapes. For instance, the amorphous outlines in the background of many of his paintings are actually the silhouettes of flowers, trees and other organic matter. By doing this, Bebo used technology as inspiration and as a challenge.

“For me, working by hand feels more natural and relaxing. Painting is a bridge between our ever-evolving digital culture and the very essence of the human condition. We are not the machines that we build, we are imperfect and so is painting. In this series of work, I created every image first digitally. I used photoshop to sketch out my designs, letting my stylus pen move freely across the digital drawing pad. Using source imagery and the basic tools of Photoshop, I created a series of work that represents snapshots of [the] fast-paced life we experience today,” explained Bebo. 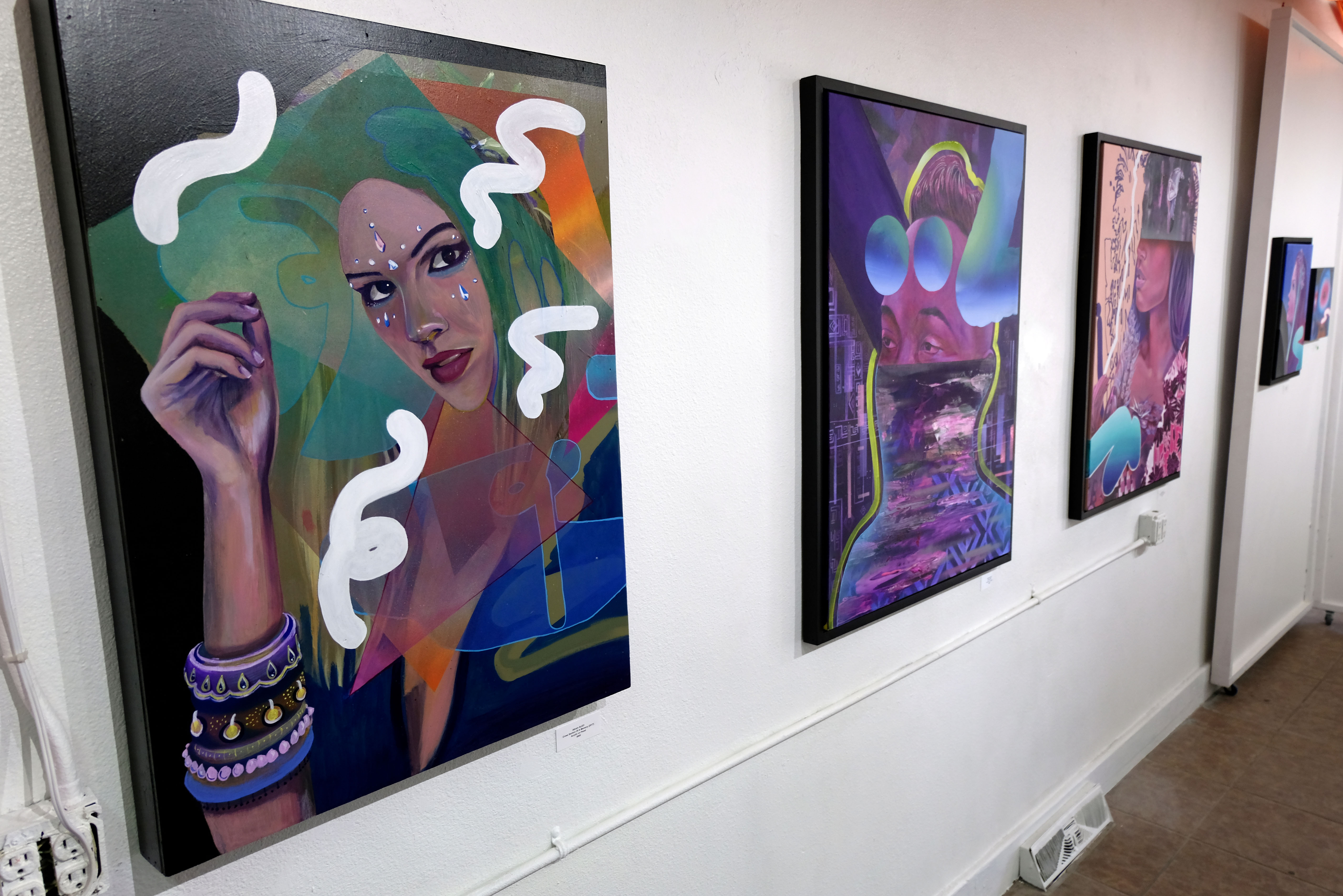 “Cross Section of a Memory,” “Drift” and “Till Death Do Us Part”

After creating on Photoshop, Bebo copied the designs onto canvas using the techniques he’s practiced for years. His style of painting has always highlighted a freedom of movement — both in the subjects and in the overall composition. It is as if a whirlwind of color and geometry has subsided for just a second and in that second the viewer witnesses the eye of the storm in perfect clarity. In that way, Bebo thrives on controlled chaos, and Pixel Pigment is Bebo’s depiction of the controlled chaos we are currently experiencing with the rise of the digital age.

With nearly 20 pieces in the show — including one mural painted directly onto the gallery wall — Bebo confronts viewers with snapshot after snapshot of individuals trapped or obscured by filters and masks. No two are similar and yet every one addresses the same thing; the desire for others to see you in a particular and planned way.

The heavy overtones suggesting the pitfalls of social media are surface level to this exhibition, however, because the truly revelatory aspect is that Bebo reversed the role of technology that he portrays in his paintings in the creation of the paintings themselves. In other words, he used digital tools (Photoshop) to clarify an idea which he then completed using an analog process (hand painting), rather than using digital tools to glorify an analog process (i.e., filters on unedited pictures). 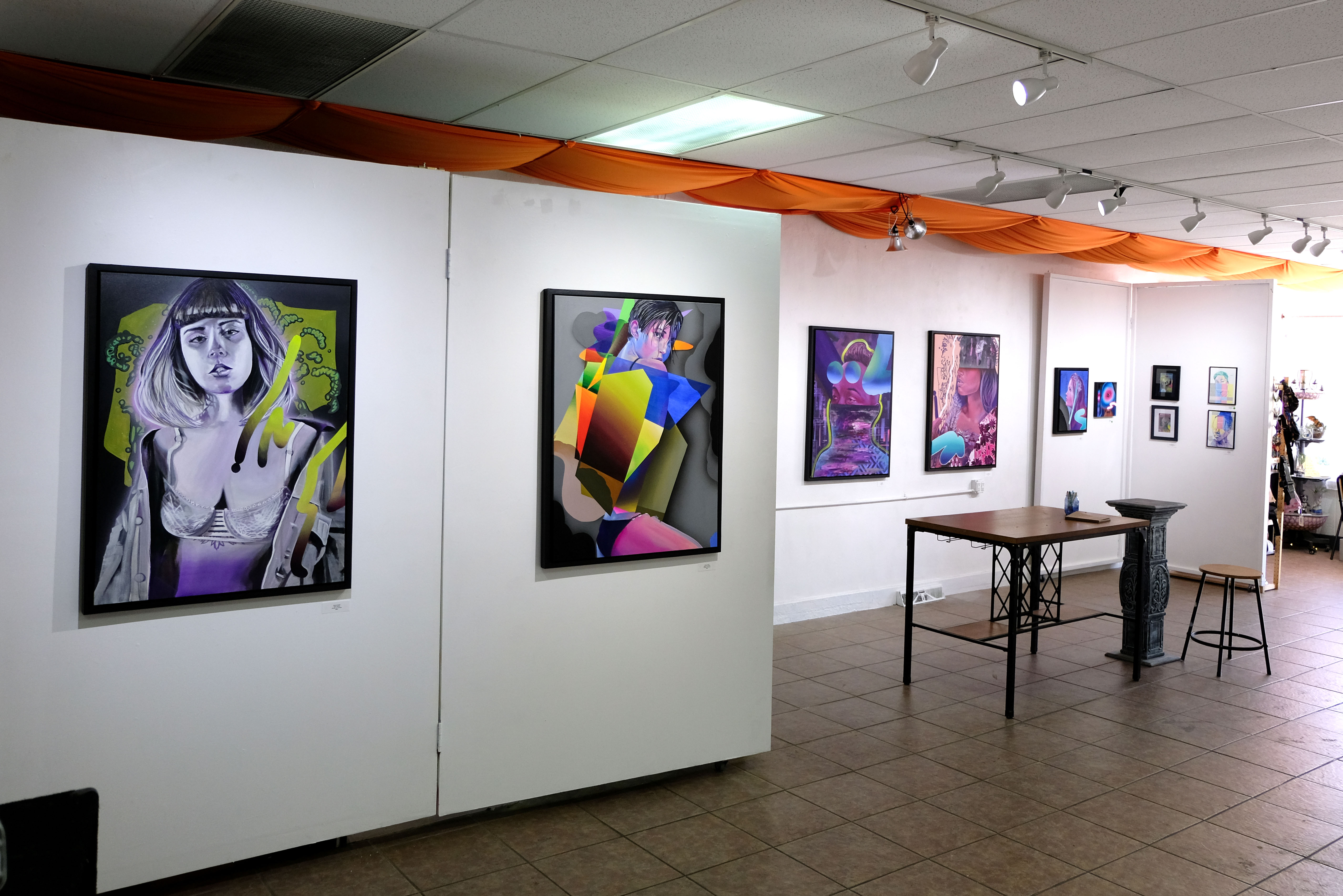 In “Splice Test,” Bebo fragments the body of the subject with chunks of gradient colors — invoking the shattered tendencies of Cubism — while drawing the viewers eye to both the subject’s face and legs. In designing it so that viewers must search for the human in the painting, Bebo guarantees that his message of bridging the gap between digital and analog is delivered. Other paintings, like Drift, cover certain features of the face that contribute to expression like the mouth only to accentuate other ones, like the eyes. In these, Bebo focuses on the intolerance of emotion in technology — why is something we created so lacking in humanity?

And that’s where Pixel Pigment earns its merits in revolting against an established pattern in art. Perhaps technology can aggrandize the act of painting without replacing it.

All photography by Ana White Photography, courtesy of Abram Bebo.