For Luisa Walker, known onstage as Ludoesmusic, she found her guitar, self-taught lyricism and her “fuck you” attitude on the streets of Denver. A cross between indie-pop and alternative, Ludoesmusic never had a genre that entirely felt like home. She mentions in her songs that her music has no structure. You could say her unstructured attitude is what fuels her lyrics as well as the style of her onstage persona. Known for her signature stars, dot makeup and her fishnet wardrobe, Ludoesmusic is doing something special in the city — she’s challenging all of her listeners to feel what it feels like to not give a damn about what others think they know about you. 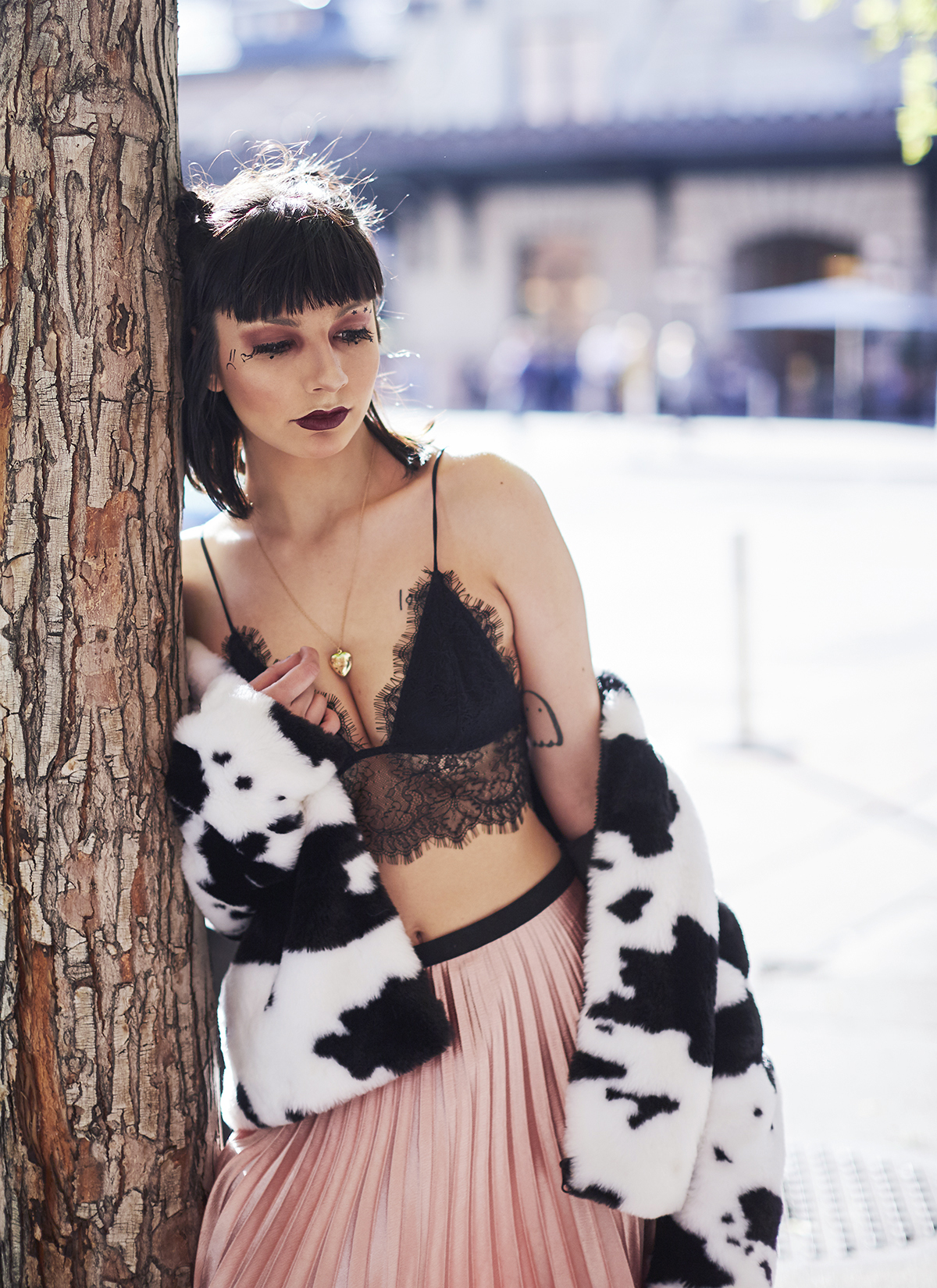 303 Magazine: When did you start writing your own music?

Luisa Walker: I started writing my own music when I was really young. I believe I was six years old. I have journals from elementary school filled with badly written and misspelled lyrics. When I was 10 a friend and I started a band called Why Oh Why Wonder Girl. Obviously, it was just a fun thing to do at the time but 10 years later I’m still writing music. I think the first actual song I wrote was when I was 14 and it really upset some irrelevant boy.

303: Genre-wise, what sets your music apart from the mainstream?

LW: I believe what sets my music apart from the mainstream is that it doesn’t fit neatly into any box. I write lyrics that are genuinely 100-percent honest in how I feel. I step away from the world when I write and I try to not think about what anyone would think about the song. Music in the mainstream is built to be popular and to appeal to a wide audience. It’s not that I actively try not to make my music appeal to a wide audience, it’s that it’s more important to me to write music that is honest to me. 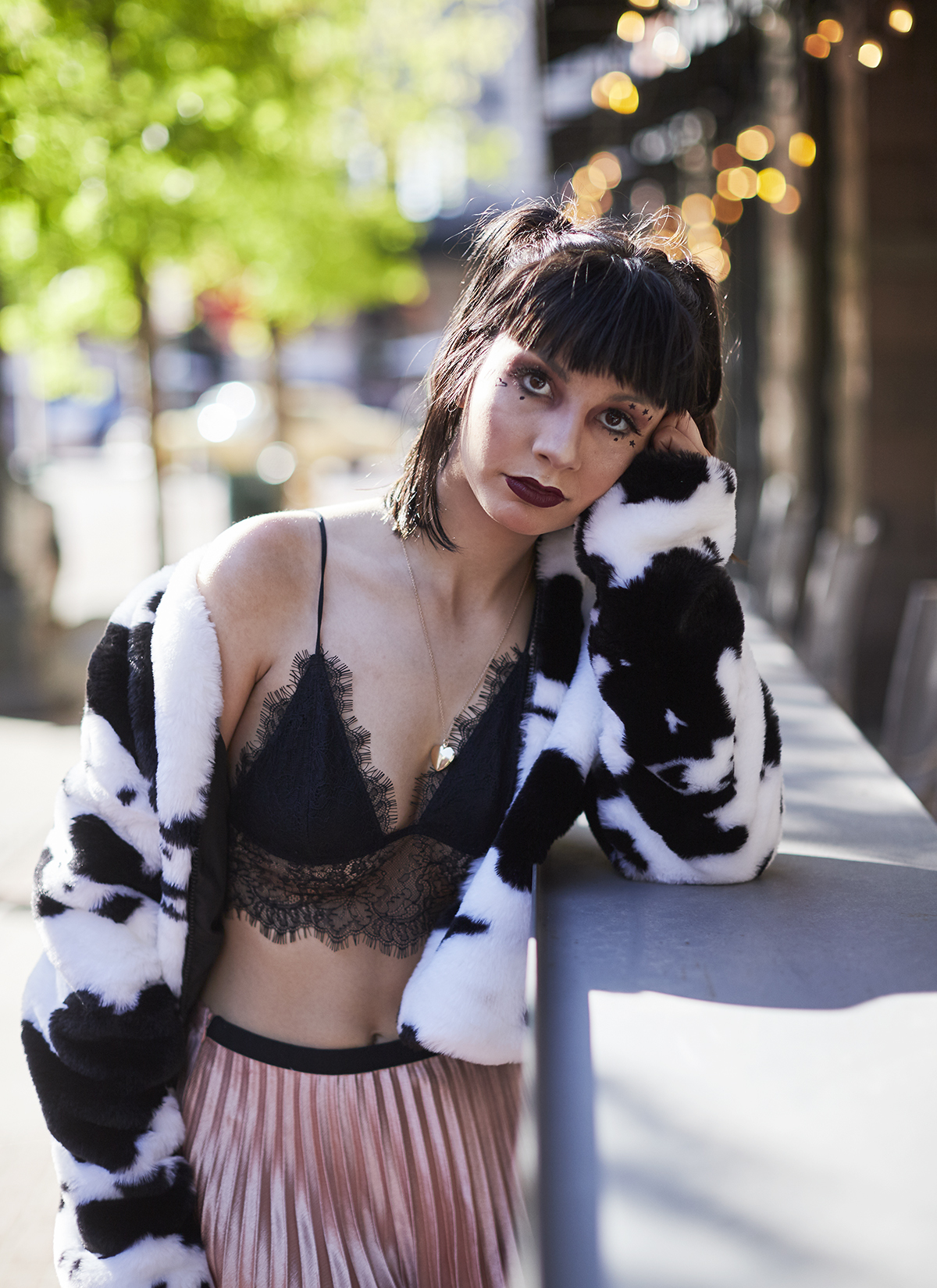 303: What song of yours is it that really describes you the most as an artist?

LW: I think the song that describes me best as an artist is my song titled “Me.” I think it wraps up what Ludoesmusic is all about — being unapologetically who I am. I’m biracial, crude and honest. If no one likes that, then they can fuck right off.

303: Your style is very avant-garde. Was your music the influence of your style?

LW: I think my music and style influence one another. I think my music gives me the confidence to do my own thing with my clothing and vice versa. I feel empowered by my clothing and music altogether. The combination makes me feel and express exactly who I am. I love that I can have that expression through fashion because I can express myself further onstage. Especially when I have my dots and stars. They’re somewhat of a signature of mine. 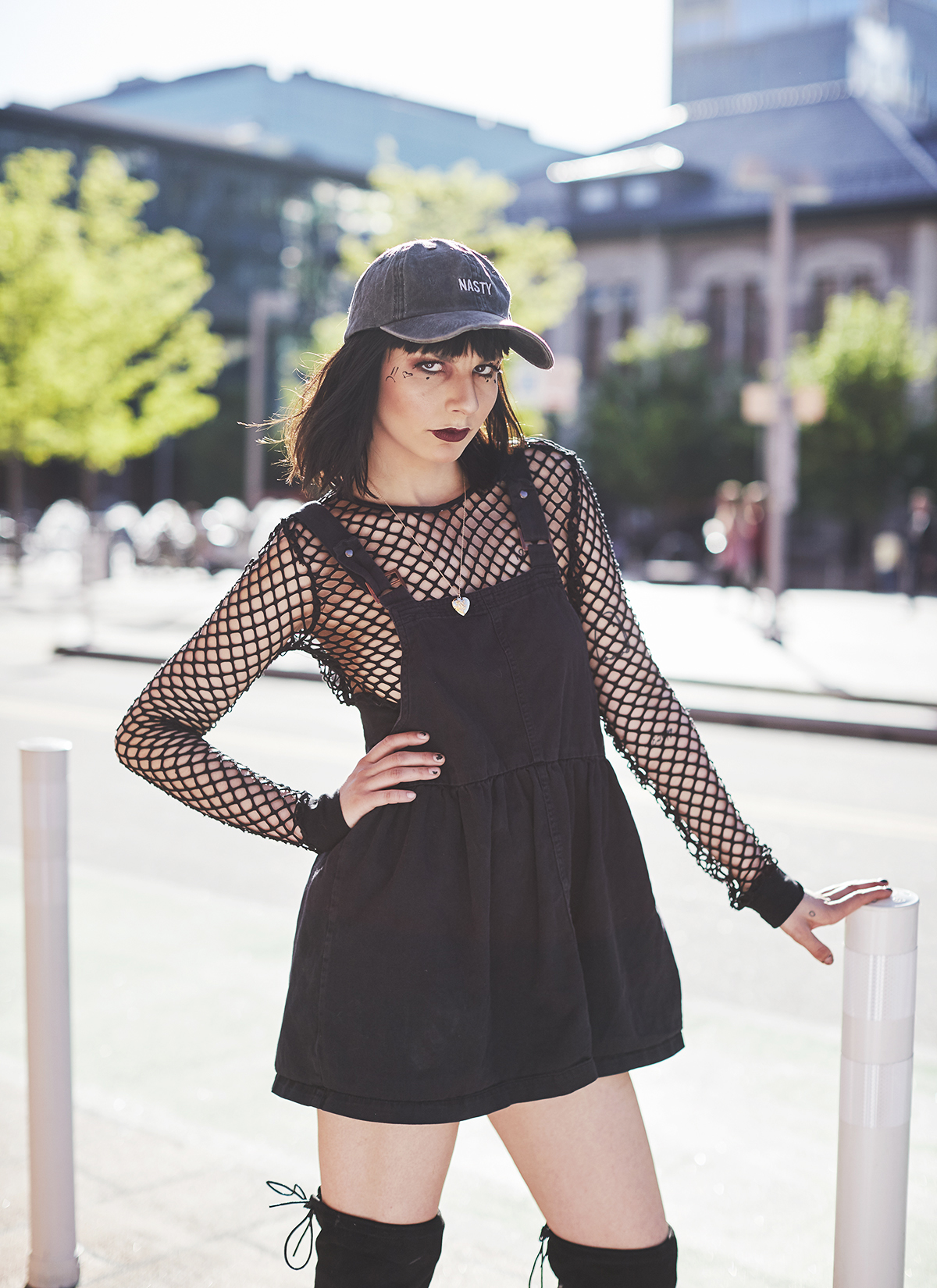 303: Your songs have a sense of self-awareness and point of view. What is the message that you’re trying to give both your music and style?

LW: That’s a really interesting question because half the time I’m not sure how to express my thoughts in a way that makes sense. Musically my style has given me a voice that I would otherwise not have. I think the message of Ludoesmusic — as well as my fashion sense — is to make you shut the fuck up and listen to what I have to say. It’s saying I matter and what I have to say also matters. The reason I don’t use a lot of metaphors or hidden meanings in my lyrics is that, personally, I as a person do not pick up on non-verbal social cues. That one fact plays a major part in my music. That’s why it’s very straightforward. I want to spread the idea of telling people in a clear way what is going on inside that my brain. That in itself is the message I’m trying to send. Just tell people in a clear way what is going on inside that brain of yours.

303: What do your most powerful outfits include?

LW: My post powerful outfits always include my dots and stars. No matter what, when I have them, Ludoesmusic is with me. I’m like Shrek — I have many layers. I feel like I am the most confident when fishnets, cool hats, weird-ass shirts I find at the Goodwill and turtlenecks are involved in my outfit. I can always tell if I like how I look because my outfit will make my heart stir when I look in the mirror. I see a badass bitch and I’m like, “hell yeah!” 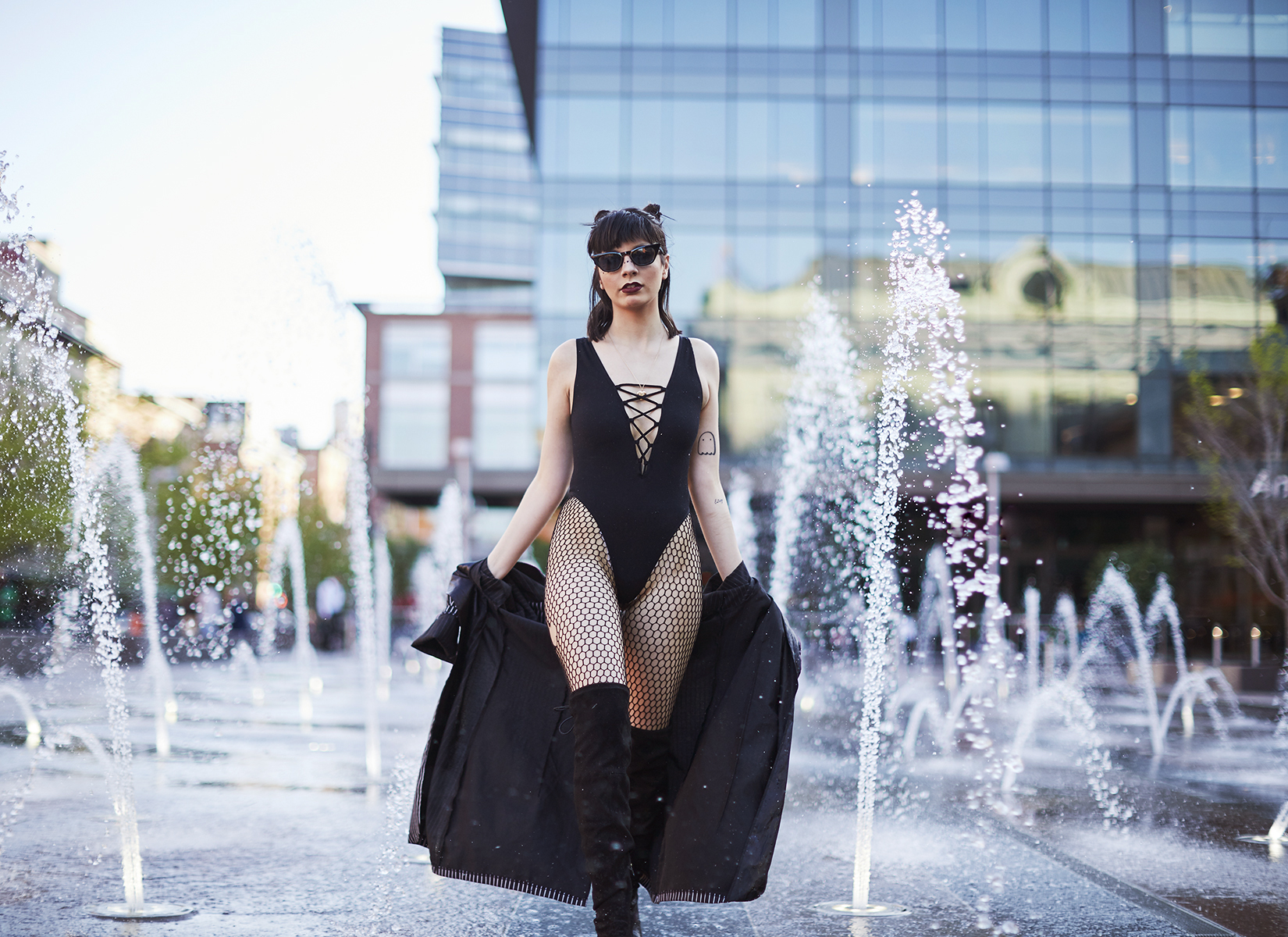 303: What do you like most about the music scene in Denver’s growing atmosphere?

LW: Denver has a really interesting music and fashion scene. Although the music scene here isn’t really one that I always fit in with I do love that the music scene here in Denver is red hot passionate and welcoming. I like that honestly in it because it helps fuel me. Denver’s fashion scene is very street oriented. For example, 7th Circle Music Collective, they support the musicians here in the city.

303: If your music could do anything to influence other people, what do you hope that influence would be?

LW: I have said half-jokingly before that my biggest dream is to see my lyrics used as someone’s Instagram caption. I want people to hear my music and be like that happened to me. I want them to know that I know exactly how they feel. I think one of today’s most popular ways of portraying one’s emotions is to use lyrics as an Instagram caption. That seems shallow but it’s really not. I really want my music to resonate with people. I want my music to be what someone listens to when they’re so unbelievably pissed or so unbelievably happy. That would be really cool. 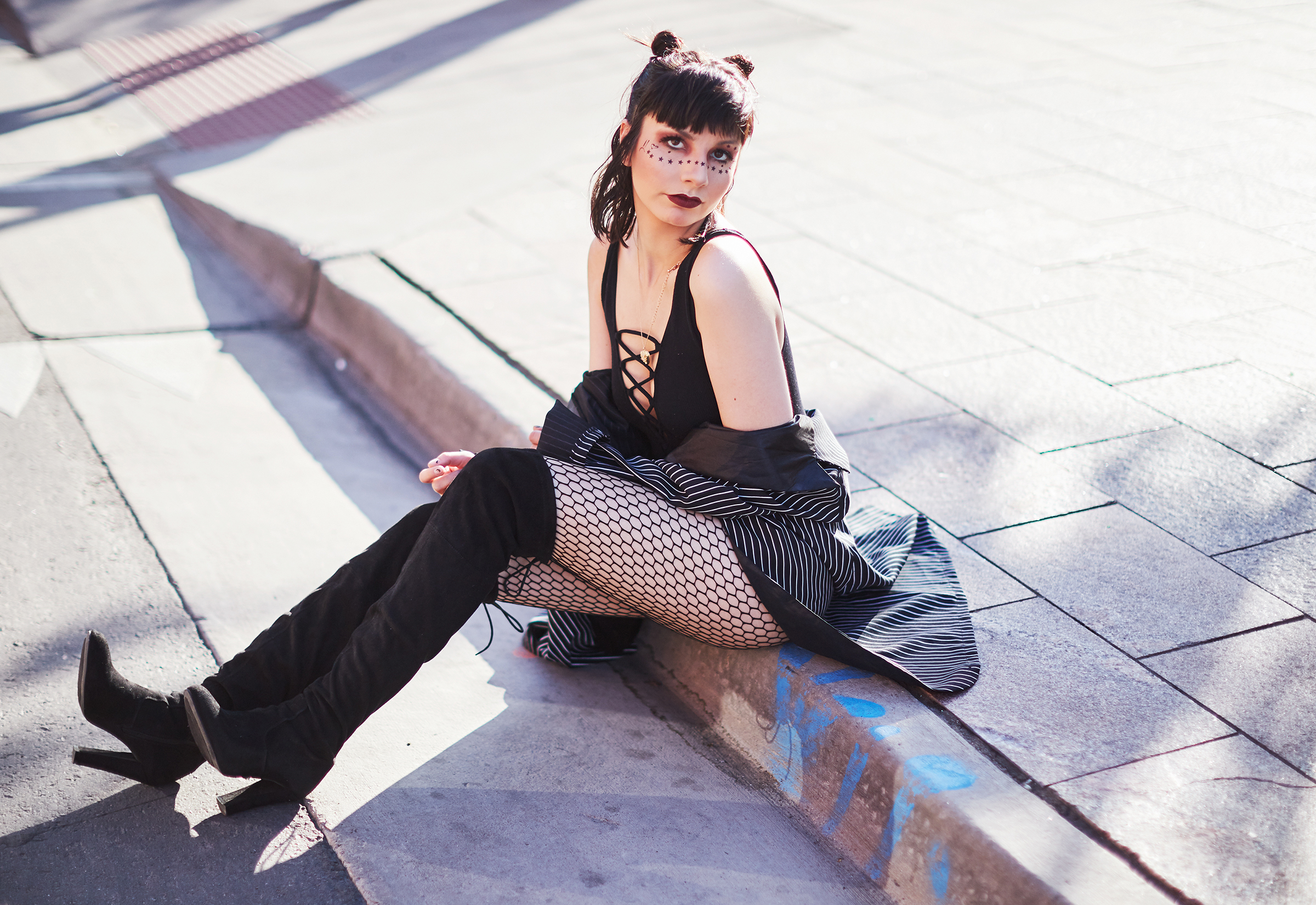 Ludoesmusic is headlining a show at the Globe Hall June 13 that will include new music from her unreleased and untitled EP that is soon to be announced.