Behold the motorcycle. If you’ve ever taken a guided tour in a city, this is probably the last form of transportation you’d think about. You might’ve been on walking tours, bus tours, bike tours — or maybe just saw the sights from behind your own steering wheel — but what if there was a cooler way to do it?

Scott Kirkwood, the founder of his own touring company, City on the Side: Sidecar Motorcycle Tours, is your go-to guy for the ride of a lifetime. He’s been riding a Harley Davidson his whole life and has decided to show tourists Denver and Colorado the best way he knows how — from the seat of an authentic, retro motorcycle sidecar.

City on the Side is the first and only fully licensed, insured, and government-accredited sidecar tour company in the United States, and it’s located right here in Denver. If you’re not familiar with a sidecar, you might be once you see a picture of one and recognize it from old movies, but only a lucky few have seen one in real life. Ural sidecars were used in World War II by the Russians (who reverse-engineered a German BMW R71 motorcycle), and they are still made today entirely by hand in the small town of Irbit, Russia that lies just east of the Ural Mountains (for which the company is named). 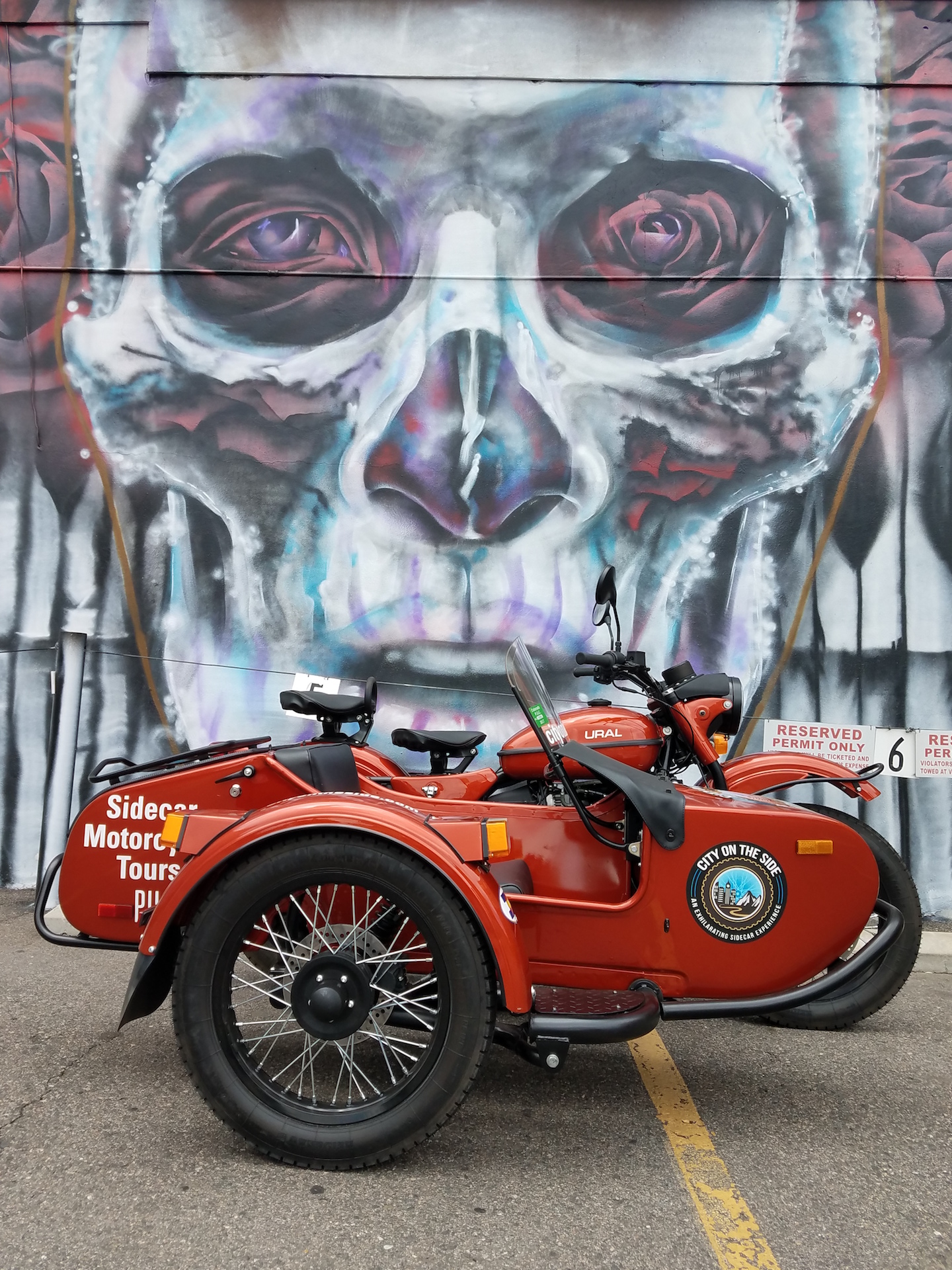 For Kirkwood, the idea for his touring company began when he laid eyes on one for the first time after participating in the 2014 Annual Toy Run to the Children’s Hospital Colorado, an event where motorcyclists, Santa Claus and fire trucks deliver toys to patients during the holiday season.

“There was a crowd around something and I didn’t know what it was. I went up and it was a retro Ural sidecar. I went ‘Oh my God.’ I’ve never seen one. I mean you see one on Hogan’s Heroes or Indiana Jones, but I’d never seen one. But that was it. I absolutely fell in love with it. It took me about five months to find the right one for the right price, but now I own a Ural sidecar,” Kirkwood said.

After obtaining his sidecar, Kirkwood did a little research and the idea for City on the Side was started.

“I got on their Instagram page to be involved in the Ural community and it was a photograph that changed everything,” Kirkwood said.

Kirkwood said that in one of the images, he noticed something interesting.

“I zoomed in on their logo and there’s a company called Retro Tour Paris and it’s a sidecar tour company in Paris. I started doing my research and read a Forbes article on this guy in Barcelona running a sidecar tour,” Kirkwood said.

“So I got on a plane. I flew to Paris. I flew to Barcelona. And came back and said, ‘This is what I want to do.’ I’ve been working for my current company for 30 years, and I don’t want to do it anymore. I want to do something that I am completely passionate about. For me, it’s not so much about the money. Now, of course, I need to break even, but to see the look on people’s faces when they’re in the sidecar. Not just the people in the sidecar — but even [people] on the side of the street. I’ve created an experience for people that they just can’t get any other way. I mean, this is on people’s bucket lists — I want to ride in a sidecar— and to see one is one thing, but to go up in the mountains to just get out and about —free — not confined like cattle on a tour bus is amazing.”

According to Kirkwood, his riders get to experience Colorado from a completely unique perspective with open-air, 360° views. City on the Side offers 1.5-hour Denver city tours all the way to three 8-hour tours of the surrounding regions including the Rocky Mountains near Estes Park, Golden, Evergreen, Morrison and more. You can even request your own customized tour, an option that is great for weddings, graduations, birthdays and other special occasions. 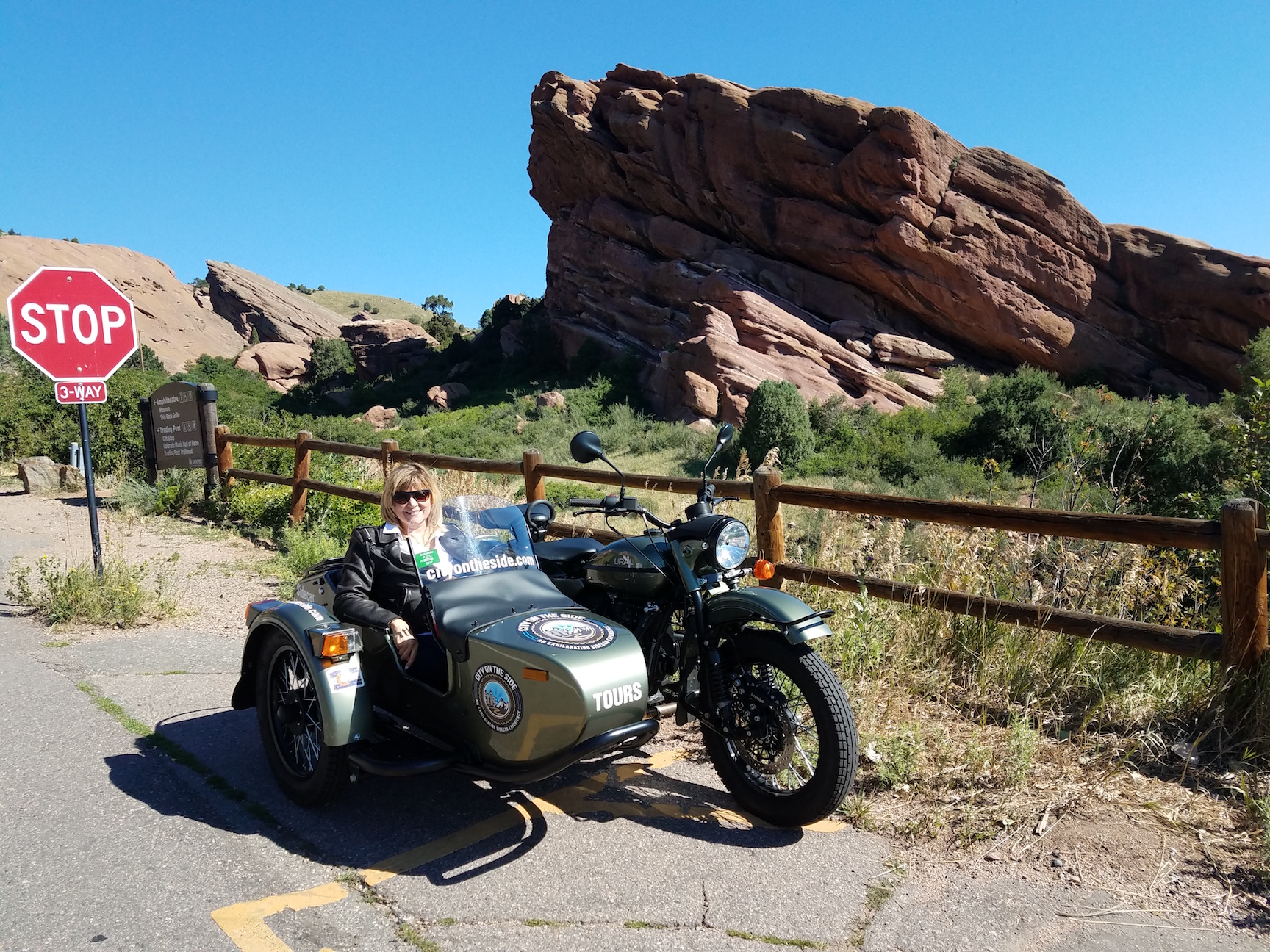 Kirkwood says the tours are great for out-of-towners obviously, but also for people who have lived in the area their whole life and want to have a unique experience, to learn more about their city or to entertain visiting friends and family.

“So you live in Denver and your parents live in Virginia and they’re coming out. You want to show them the city. You can take them out to Estes. Or you can be like, ‘Hey mom and dad, you want to do something really cool? We’re going to do a sidecar tour and show you Denver,’” Kirkwood said.

The best part of the sidecar experience is that you don’t have to do the talking. Kirkwood or one of the other certified motorcyclists provide the commentary and background history as they drive you from location to location.

“All you do is sit back and enjoy the ride,” Kirkwood said.

In Kirkwood’s opinion, the best part of the tour is the look on people’s faces.

“I tell everybody before we start the tour to get ready to be the center of attention. I’m serious. I’m going to make you the movie star. Everybody is going to look at you,” he said.

But you don’t have to do it alone. Kirkwood said that each motorcycle actually carries two people per ride — one in the sidecar and one on what’s called the pillion seat that’s mounted to the rear fender. If riding on the back of a motorcycle sounds terrifying, Kirkwood reassures it really isn’t.

“We don’t go that fast. We go 25-35 miles per hour and interestingly enough, a lot of people prefer the pillion seat. A lot of people will actually switch seats halfway through the tour.”

Kirkwood said he has taken eight-year-old kids through the Make-A-Wish Foundation and even 95-year-old ladies from nursing homes on his tours. The motorcycles never exceed 65 piles per hour, so they’re relatively safe, and they rarely—if at all—venture onto highways.

“It’s all on back roads, scenic byways, peak to peak highways—really only two-lane back roads. We do not do freeways,” Kirkwood said.

The bikes are even equipped with Brembo disc brakes, which are top-of-the-line, and ensure that altitude on higher mountain roads isn’t a problem. Kirkwood said that he might even start taking the tours up fourteeners — specifically Mount Evans — in the summer.

According to him, even his more hesitant riders find the experience completely laidback.

“Within five minutes you’re actually used to the sidecar. You’re comfortable. That’s when it gets fun,” Kirkwood said.

In the event of an emergency though, Kirkwood said that they are more than prepared for all kinds of situations. Each motorcycle has a first-aid kit, portable oxygen tanks, rain gear, face shields—even a cover for the sidecar. They also frequently monitor the weather to avoid afternoon thunderstorms. The helmets are also fitted with Bluetooth technology so that the drivers don’t have to keep turning their heads to talk to passengers and can keep eyes on the road at all times. It’s a new addition to the tour company that has also made it easy to communicate with other motorcyclists in the group.

Have there been any accidents?

“Nope. Nothing even close,” Kirkwood said. 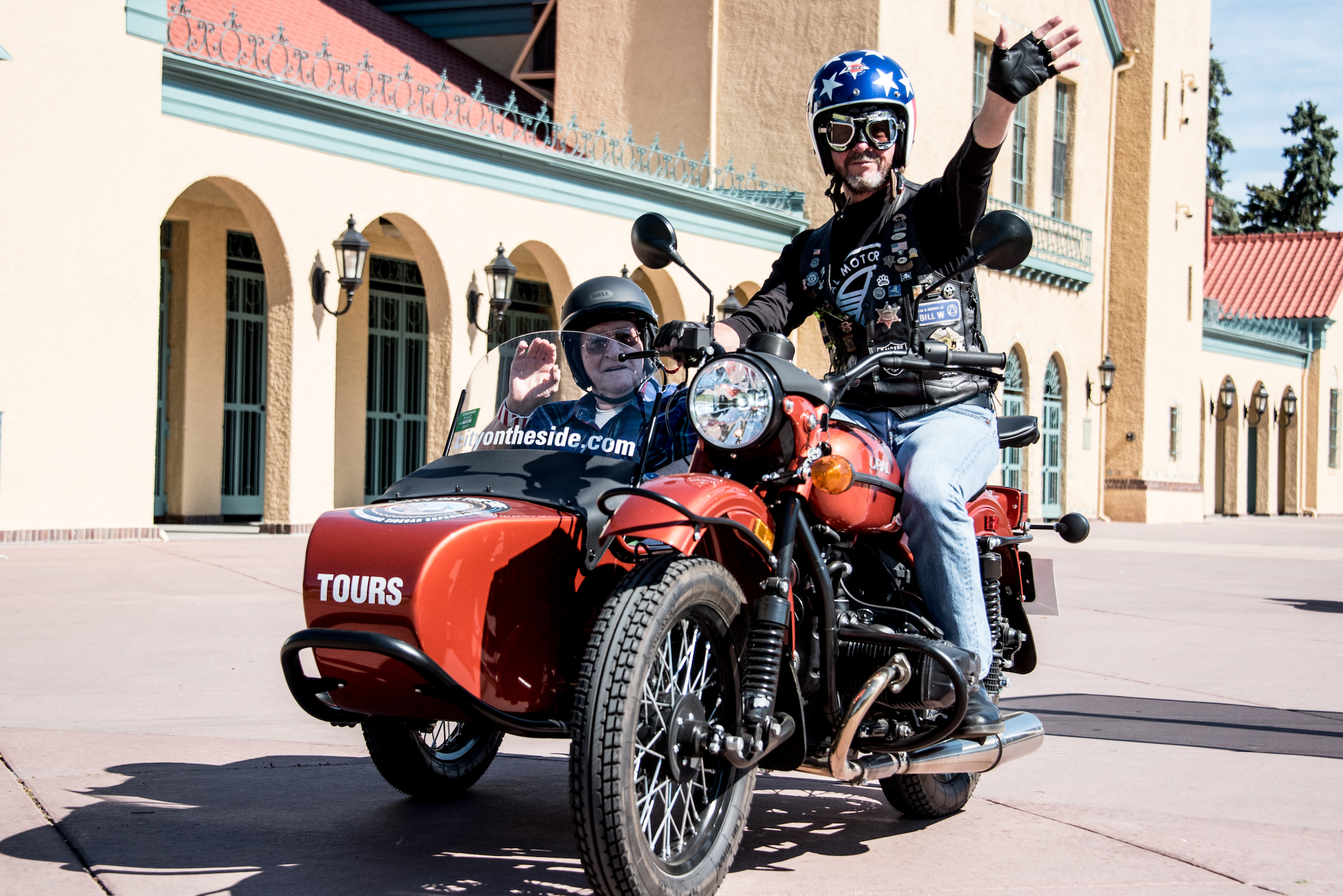 In addition to safety, Kirkwood also says his top priority on each tour is education. He wants everyone to learn more about Denver and the surrounding area than they knew before the tour. Kirkwood has personally designed every sidecar tour himself and says he spent hours riding through Denver figuring out where to stop along the way on his city tour.

“I’ve lived here for 11 years and I did not know Denver until I started laying out that city route. That is the hardest thing I’ve had to do so far. We have 22 points of interest,” he said.

The city tour focuses on iconic Denver sightseeing spots such as the capitol building and Denver Art Museum, but it also features what Kirkwood calls undiscovered gems for people who are in Denver for the first time and have already seen 16th Street Mall.

“My favorite part is riding through City Park, and riding down by the Botanic Gardens and Cheesman Park and going down up and down Humboldt Street and showing them the old mansions of the 1800s and 1900s. That’s certainly a part of Denver tourists don’t typically see,” Kirkwood said.

On the tours that run outside of the city, Kirkwood said some of his favorite places to take his riders are along the back roads of Colorado such as Golden Gate Canyon Road and to places off the radar like Central City, a town near Black Hawk that’s perfectly preserved with roots that trace back to the gold mining age of the West.

He also aims to help local businesses by focusing on art museums and other sites that don’t get a lot of tourist attention and are most often missed or unheard of but are worth checking out — a partnership that would keep money in Colorado communities. 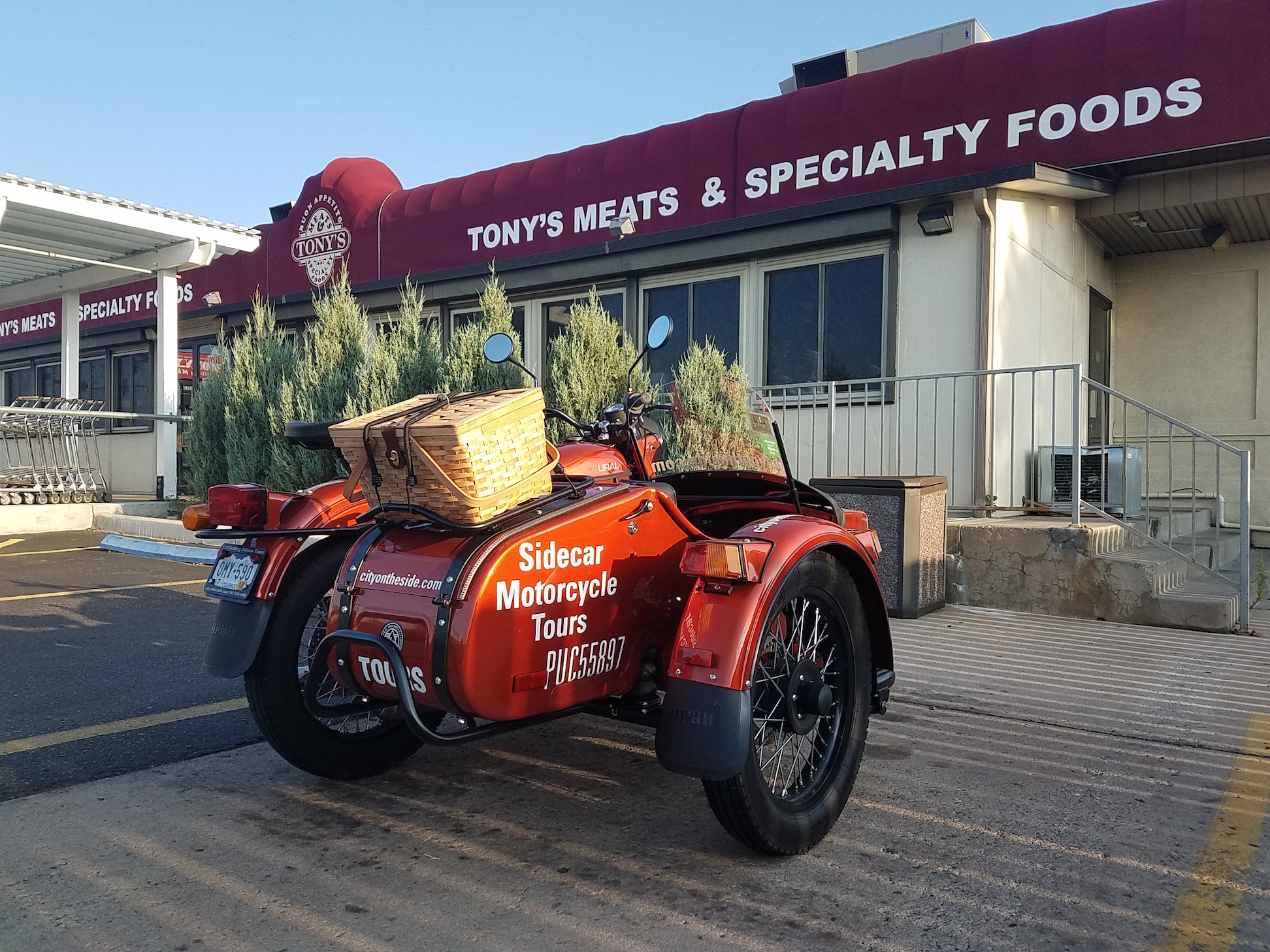 His tours also include a picnic lunch option with food packed from Tony’s Market, a local gourmet grocery store.“I get grandma’s old wicker basket that we can mount to the back of the sidecar and then we pull over at a beautiful overlook, lay out the red-and-white checkered blanket, pull out the picnic basket and hang out. Tony’s is something that everybody local knows. I didn’t want Subway or Firehouse or any other corporate chains. I wanted Denver. I wanted Colorado,” Kirkwood said.

The authentic, local experience for riders on the tour is always a good one, and Kirkwood never gets sick of it. For him, it’s about sharing his passion.

“I can’t explain it enough. This is not a tour for me. It’s not a tour. Anytime I get to ride my Harley Davidson — that is my passion. There is nothing in the world that excites me more than to get on my Harley Davidson and take two weeks off and ride 3,000 miles. That’s where I get my serenity,” he said.

“When I’m in the middle of Utah and there’s nobody for 100 miles and I got my Harley ‘Pearl’ — her name is Pearl — that’s how I find my peace. It’s just my motorcycle and me. There’s nothing in the world that clears my mind more like a big, long, solo motorcycle trip. I love it. I absolutely love it.”

And, as Kirkwood explains, his riders love it too.

“Most of my tours do not end with a handshake. They end with a hug. I’m not even joking. It gets to that personal level. I’m not just the guy with the microphone saying, ‘Well this is the Molly Brown House and this is the Science and Nature Museum, blah, blah, blah.’ We really get to know people and where they’re from and why they’re here. It’s a really personal experience,” Kirkwood said. “I want to create lifelong memories for people.” 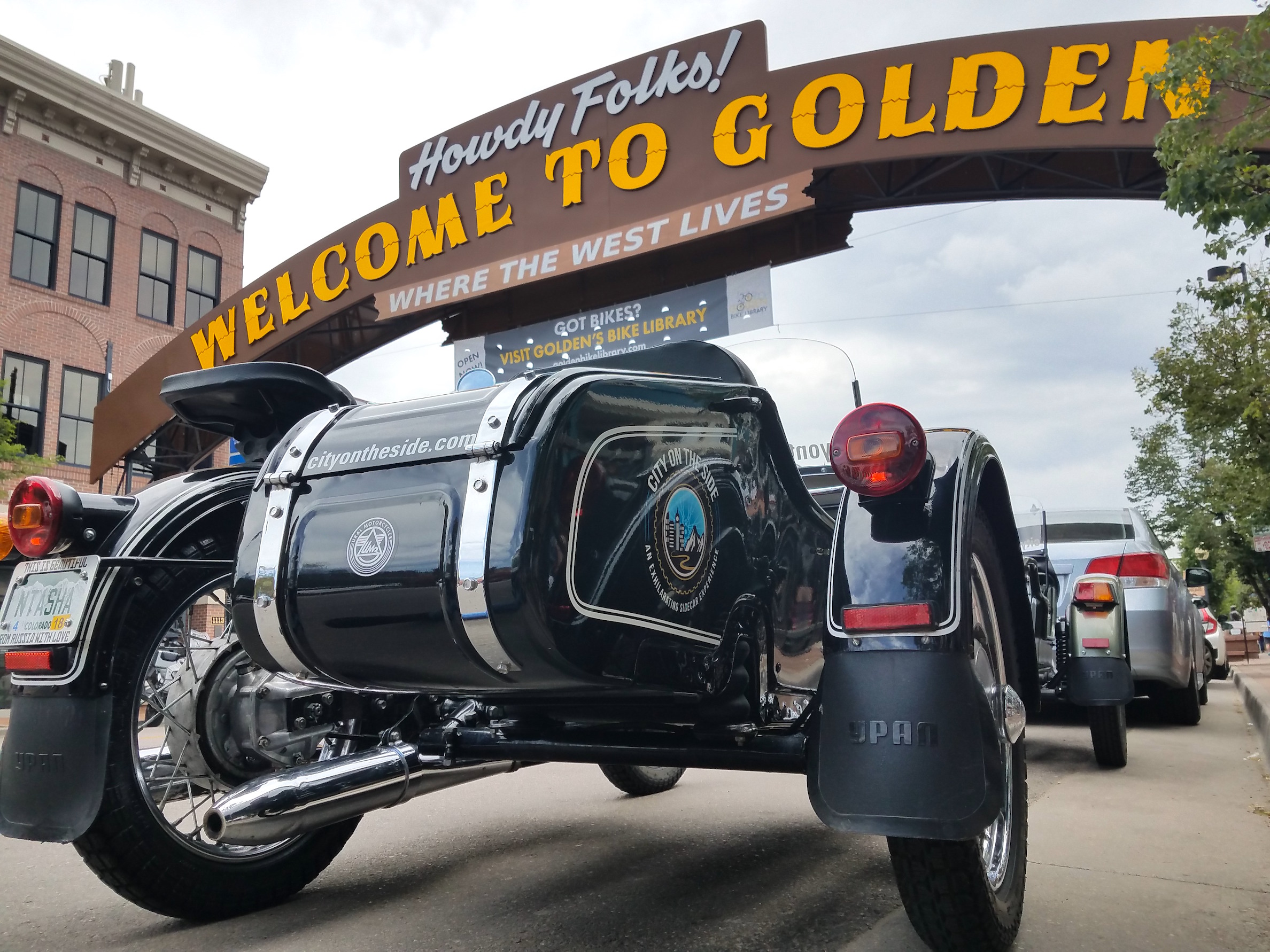