Art is therapy — whether that’s in the form of music, dance, song or paint. It helps us communicate things we can’t say out loud or feel. For Denver-based artist Kimothy Joy, her art began as a way to heal and turned into a form of inspiration for herself and women everywhere.

As seen with many women after the 2016 election, Joy felt uneasy and distraught. “I think the most triggering observance for me during the election was that a man who was a blatant misogynist could still be elected as president — even by a great majority of women. It offended me to my core,” she said.

While some people processed the election by turning to friends and family for comfort or vented on social media as a form of cathartic release, Joy turned to her paintings. A few nights after the election, she began painting portraits of famous women.

“I created a standard format with gold vine leaves surrounding the woman’s portrait; I thought the Japanese gold paint showed reverence and honor. Then I went on to paint Maya Angelou, Virginia Woolf, Harriet Tubman, Grace Lee Boggs, Eleanor Roosevelt, and more. I wanted to be reminded visually of all the women who had come before us and stood up for themselves, for others, for us, in the face of great adversity,” she said. 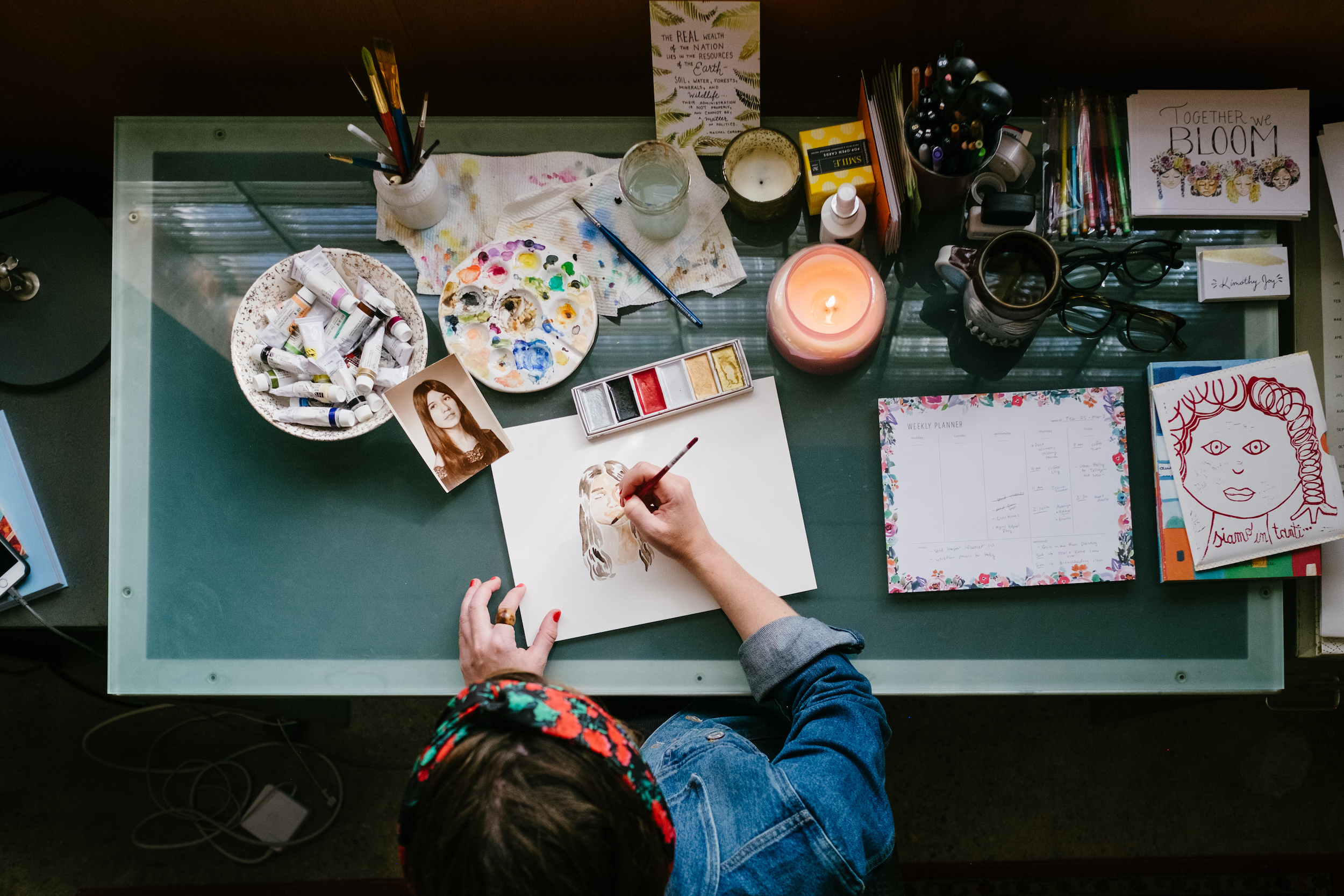 Joy had previously painted portraits of women but had yet to share them online. It was when she posted the paintings on social media when things really took off. “The organizers of the Women’s March started frequently sharing the portraits; and then, The Huffington Post,” said Joy. “What began as a personal project turned into something much bigger.” In January, a literary agent contacted Joy about turning the series of portraits into a book. “She had made it her personal commitment at the Women’s March to focus her efforts on advocating for women just as I did. Our intentions were in sync from the beginning, as were the publishers’ at HarperWave, so it was a beautiful, collaborative process from the start,” she said.

Pairing inspirational women with their equally inspirational quotes, Joy assembled a collection of watercolor paintings that would fill the pages of her book, That’s What She Said: Wise Words from Influential Women. Noting the play on words, That’s What She Said, Joy stated, “I wanted a provocative, in-your-face-phrase, so to speak, that was a way of re-imagining the pop culture phrase and making it one that commemorates women rather than one that undermines them.”

That’s What She Said features over 50 women of different age, race and background. The book includes women such as Maya Angelou, Billie Jean King, Helen Keller and even Michelle Obama.

“I thought it would be more potent and powerful if it included a collection of influential women from the past and present — of different backgrounds, ethnicities, countries, religions, ages, sexual orientations, gender expressions, — all in one book…While each woman’s story is unique from the next, we are all in this together. Our liberation and progression in society are tied to one another.”

The process of choosing the women who were featured in the book, however, wasn’t a simple — or quick— decision. Joy began with a list of over 100 women, both alive and deceased, that she deemed as groundbreaking leaders in their respective fields and “who lived their lives with great courage amid great diversity.” From there, Joy narrowed the list down to the 50 women she felt most connected with and based off her personal admiration for each one; women who encourage other women to be advocates for social change and to make a daily impact in their lives. “I like to think that the paintings are a love letter and a thank you from me to each of the women featured,” said Joy.

The painting of the portraits was a whole other process. Joy would begin by reading about the individual woman and listening to a podcast of her biography — or a speech that she delivered — while painting the portrait from a reference photo she felt captured the essence of that woman.”It felt like I was in intimate conversation with each of them as I created a sacred space and made time to delve into their lives. It was so cathartic and inspiring,” she explained. Joy then selected a quote based on what she felt our world needed to hear at that moment — from denouncing bigotry and racism to promoting women’s reproductive rights.

While painting portraits of inspirational women may have just recently transpired, Joy has been an artist her whole life. “I’ve been drawing, painting, and creating for as long as I can remember. It’s always been a part of who I am. I would draw for hours even as a toddler, on the floor, in the car, at the babysitters — everywhere,” she said.

Interestingly enough, Joy initially disliked watercolor paintings and avoided using it as her medium. “I didn’t like the lack of control with [watercolors]. I was more drawn to oil and acrylic paints and loved to paint realistic portraits,” she noted. It wasn’t until she turned 30 did she change her stance. She began to use it as a means of escape from the daily work and computer life, calling it her daily, therapeutic routine. “I learned to love the way watercolors do their own thing, running and blending together. They have a mind of their own once you apply them to paper. It was definitely a lesson in letting go of control and just seeing what happens each time the paint touches paper.” 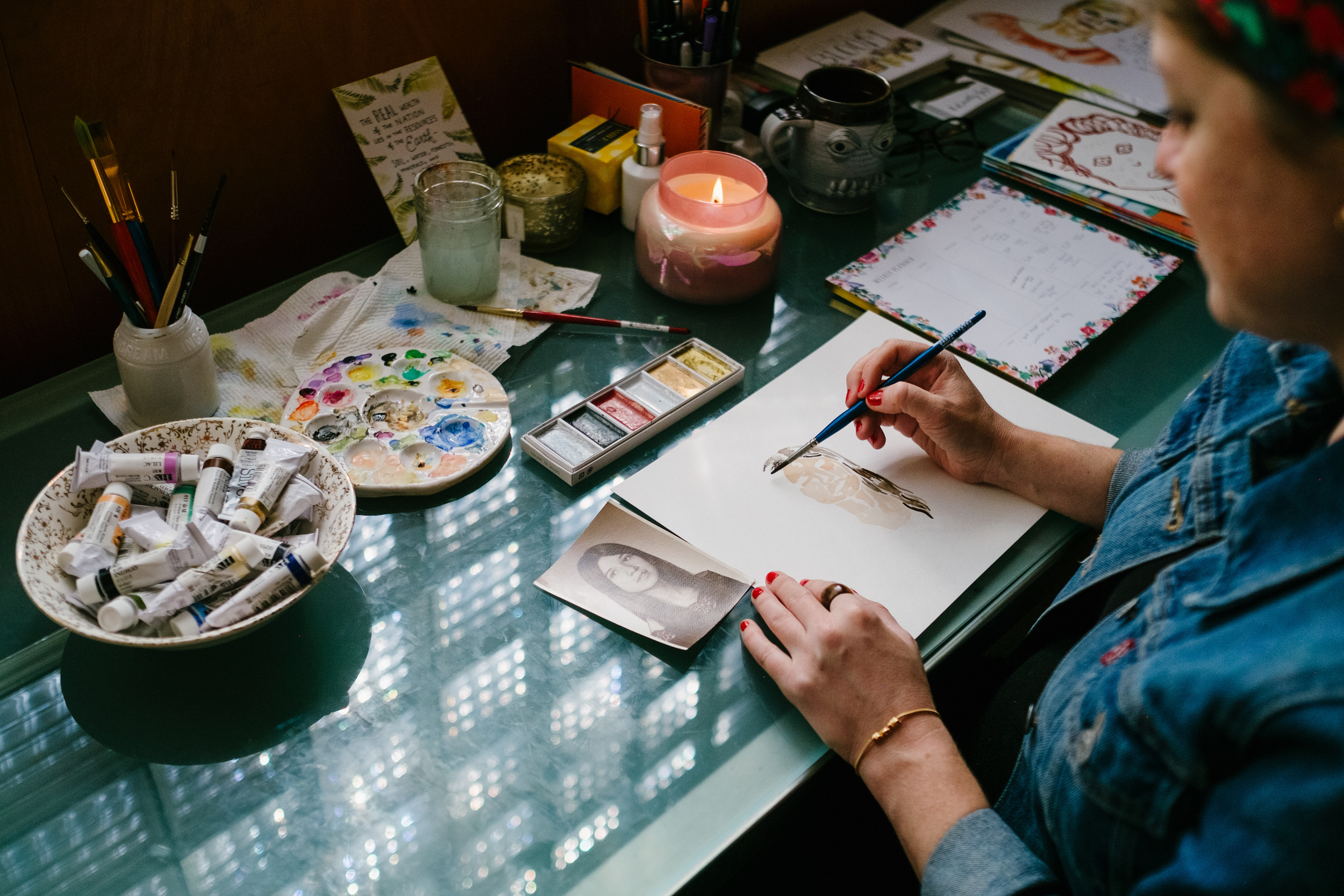 The choice to paint portraits after the election was a result of her relationship with her mother.

“I was wondering what my mother would say. That happens often during any high or low point in my life. I return back to wondering how’d she’d react or what advice she’d have for me…My mom was Mexican-American and that led me to start out painting Frida [Kahlo]. I wanted to focus on the power and self-respect she exuded so much of,” she said.

Having passed away from breast cancer in 2009 when Joy was 25 years old, Joy still thinks of her mom as her biggest inspiration. “It was literally the worst thing I could imagine for my life but it has had a profoundly beautiful impact on my outlook that I cannot disregard. She was a prime example of making something from nothing, coming from little means and creating a beautiful life for herself and her family…She taught me that every person matters and that service to others is a priority.”

Joy hopes that through the examples of the women in That’s What She Said, other women will realize that they, too, can individually make an impact. “You don’t have to come from privilege and prestige to show up and be a leader,” said Joy. “We oftentimes idolize these icons and think that they’re very different from us. However, as you learn more about each of their lives, you recognize there were many opportunities for them to give up and be silenced by their oppressors. It was by rising each time they got knocked down that these women were and are legends.”

As for her own favorite design? “[It] was created in collaboration with I AM THAT GIRL. It’s a collage of diverse female faces with gold crowns on their heads. The hand-lettering in the center reads: ‘We are the leaders we’ve been waiting for.'” she explained. “I think it shows solidarity and unity among women, a global sisterhood, and a quiet reverence and strength that we all have innately within us… I think this design is a call to action that we each are capable of being leaders in our communities.” 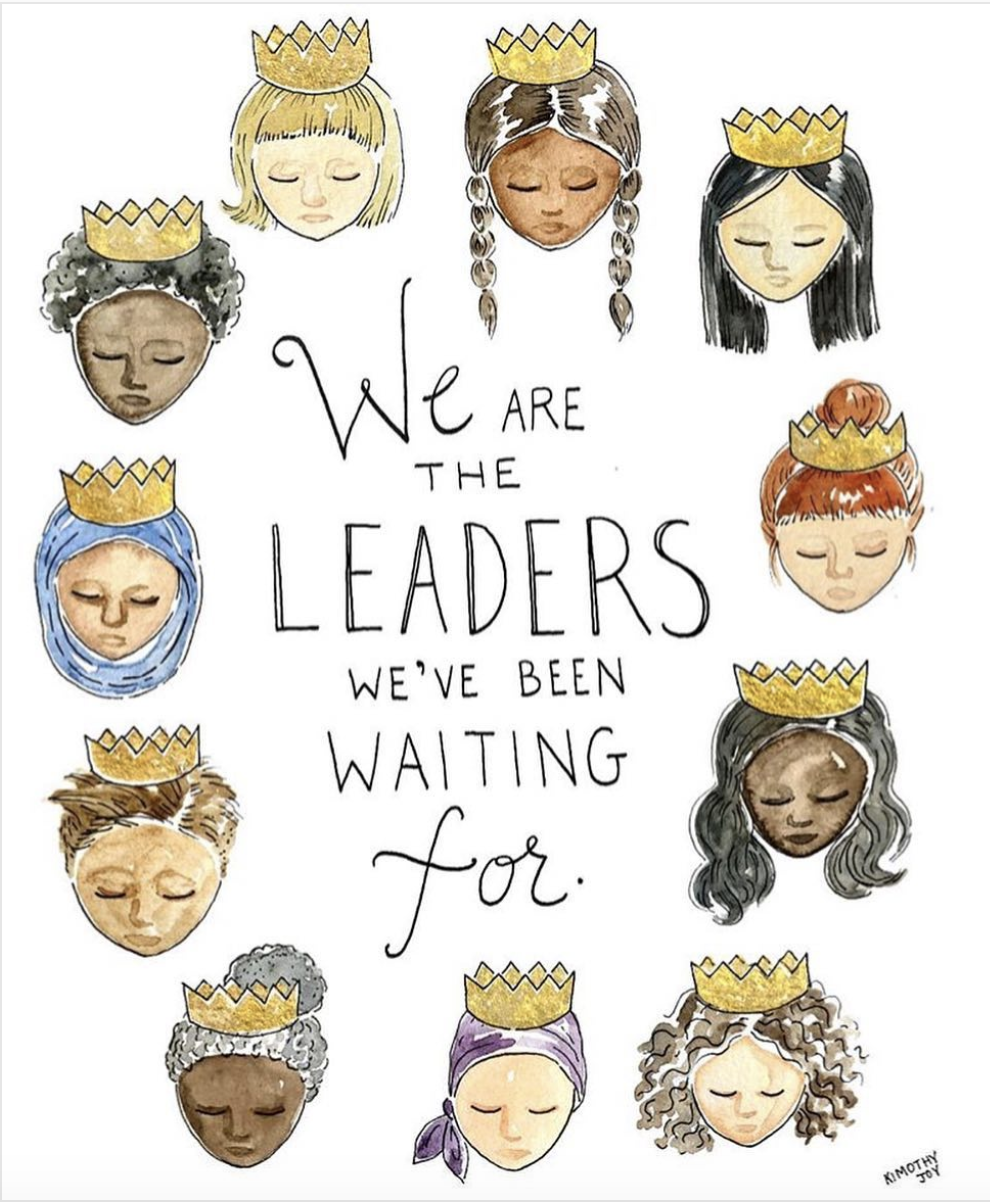 Joy has since collaborated with organizations such as Melinda Gates, Reese Witherspoon’s digital media company HelloSunshine, GUCCI, The Huffington Post, I AM THAT GIRL and more. “My perspective is that I’m a steward of social awareness campaigns and I strive to amplify messages through approachable, thoughtful watercolor artwork. Some of my favorite projects have been partnering with Melinda Gates on a Breastfeeding Awareness Campaign and then a portrait series of Women Making History.

That’s What She Said: Wise Words from Influential Women is now out, just in time for Mother’s Day. Also fitting enough, during the course of this article Joy her self had a baby, so congratulations to her and all the mothers out there.