Review – Lorde Embraced Both Her Strengths and Weaknesses in Denver

On Monday night in Denver, Lorde took over the Pepsi Center with Run the Jewels and Tove Styrke. The 21-year-old New Zealand pop singer/songwriter hadn’t performed in Denver in four years. Now, returning to the Mile-High City on her “Melodrama World Tour,” Lorde is proving she doesn’t give a fuck what people think. From her dancing to her style and stage persona, her carefree attitude shined bright at the Pepsi Center. Paired with some kick-ass openers, Lorde’s “Melodrama World Tour” is one of the not-to-be-missed shows of 2018. 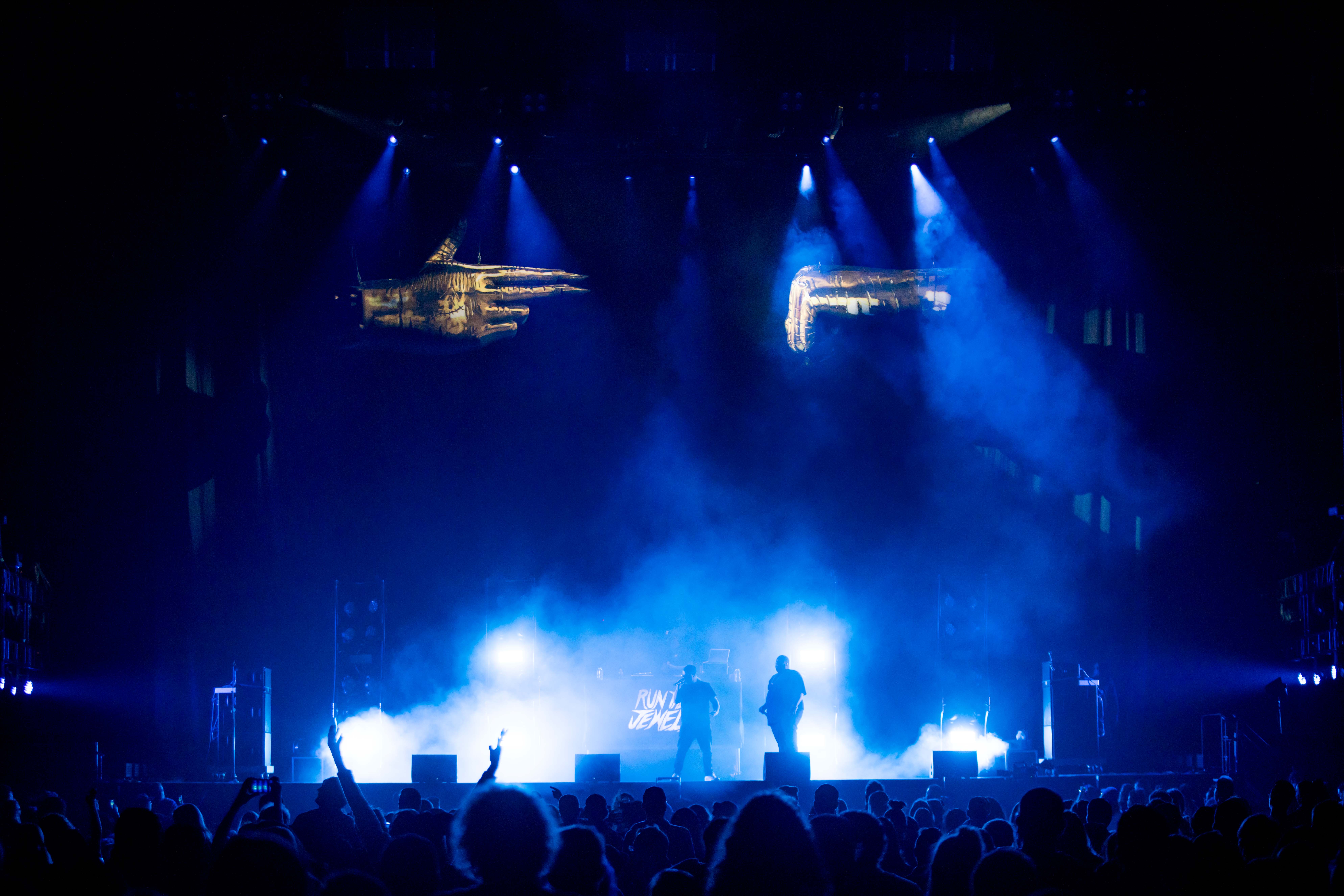 Many of us were shocked when hip-hop duo Run the Jewels (RTJ) announced their opening spot for Lorde at the Pepsi Center. However, it seems the pairing is off to a great start, with Run the Jewels releasing a remix of Lorde’s “Supercut” just last week. Though an odd combination, RTJ is the perfect opener for any show. Why? Becuase they’re hype as fuck. Leave it to RTJ to warm up any crowd. With towers of bright strobes and relentless alliteration, it’s hard to stand still. The stage charisma between El-P and Killer Mike is unmatchable, spewing a fun and positive vibe.”Are you guys excited for Lorde yet?” said El-P. “She’s amazing and we’re excited to be here. I’m just psyched to be here at all, to be honest with you,” he continued, “It’s 2018 and congratulations — you’re still fuckin’ alive. That’s a big deal, I gotta’ say.” “We here baby!” replied Killer Mike.

Politics and positivity were the fuel that powered Run the Jewels’ set. “Hugs for you. Hugs for you. Hugs for you,” rap icon Killer Mike said in between songs, jokingly offering hugs to fans in the crowd. The Bernie Sanders advocate later discussed the need for more women in office in light of Women’s History Month which sparked much applause from the crowd. The duo also touched upon suicide prevention. Killer Mike said,

“No matter how hard this world gets, young people —no matter how much the day kicks you in your ass — suicide is never a fucking option. You are loved, you are cared about, you are thought about, you are valued [and] you are needed. For those that are strong — make sure that you take care of the weak and the meek and you restore them to their strength so they may help another.” 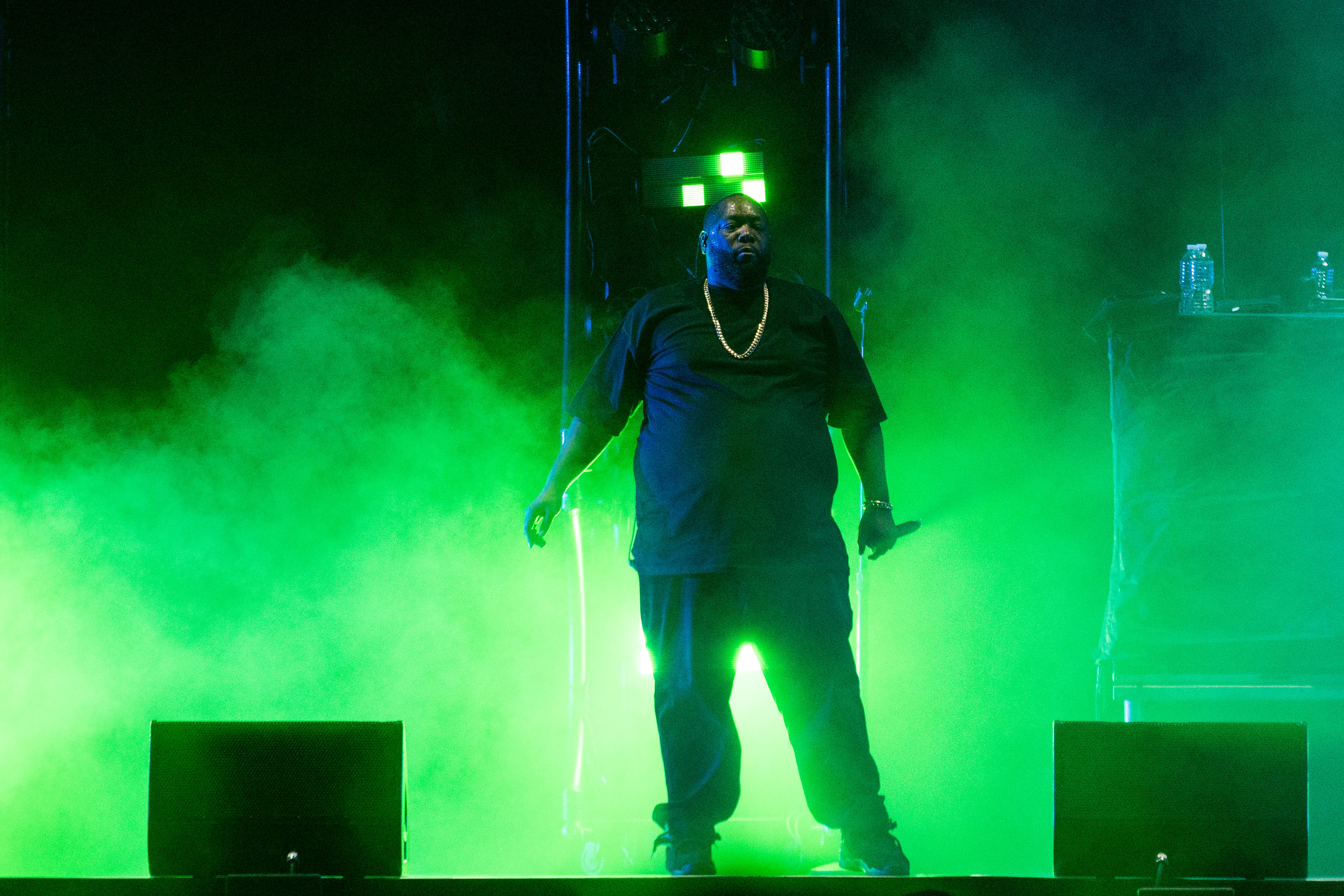 Next up was Lorde. Her stage setup was surprisingly simple, especially at first. There were no LED lights hanging above the crowd like at most arena shows. At first, Lorde hid in the dark while she sang the opening of “Sober,” her dancers simultaneously performing a beautiful ballet-influenced routine. Eventually emerging from the dark, Lorde strutted to the stage-front igniting applause from the crowd. A live band lined the back of the stage and, unlike Lorde, remained in the shadows for most of the show.

“Hello and welcome to the Melodrama World Tour. It is so good to see you, Denver. Oh, my goodness. It’s been a few years since we last hung out. I remember the last time we came to Denver it was a very sweaty, dancy crowd and I’m in the mood for a sweaty, dancy night.” – Lorde

Immediately, the choreography impressed — The Melodrama World Tour paired Lorde with a handful of diverse dancers that sported different variations of neutral-colored clothing. Sometimes the dancers performed together and at other times solo but the interpretive aspect is where the choreography truly shined. At times it was as if a story was being told by the dancers on stage, and Lorde was the narrator.

Though the narrator, Lorde still playfully joined in on some of the choreography like during her performance of Disclosure’s “Magnets.” Now, let’s be honest — the young star isn’t the best dancer. Known for her claw-hand and stiff gestures, the pop star falls flat when it comes to choreography. However, she made up for it by, well, still dancing. That’s right — though Lorde can’t dance, watching her bust out imperfect moves was refreshing. The way she playfully joined in on some of the choreography — often laughing whilst doing so — encouraged those who may be too embarrassed to let loose to join the star in just having fun. 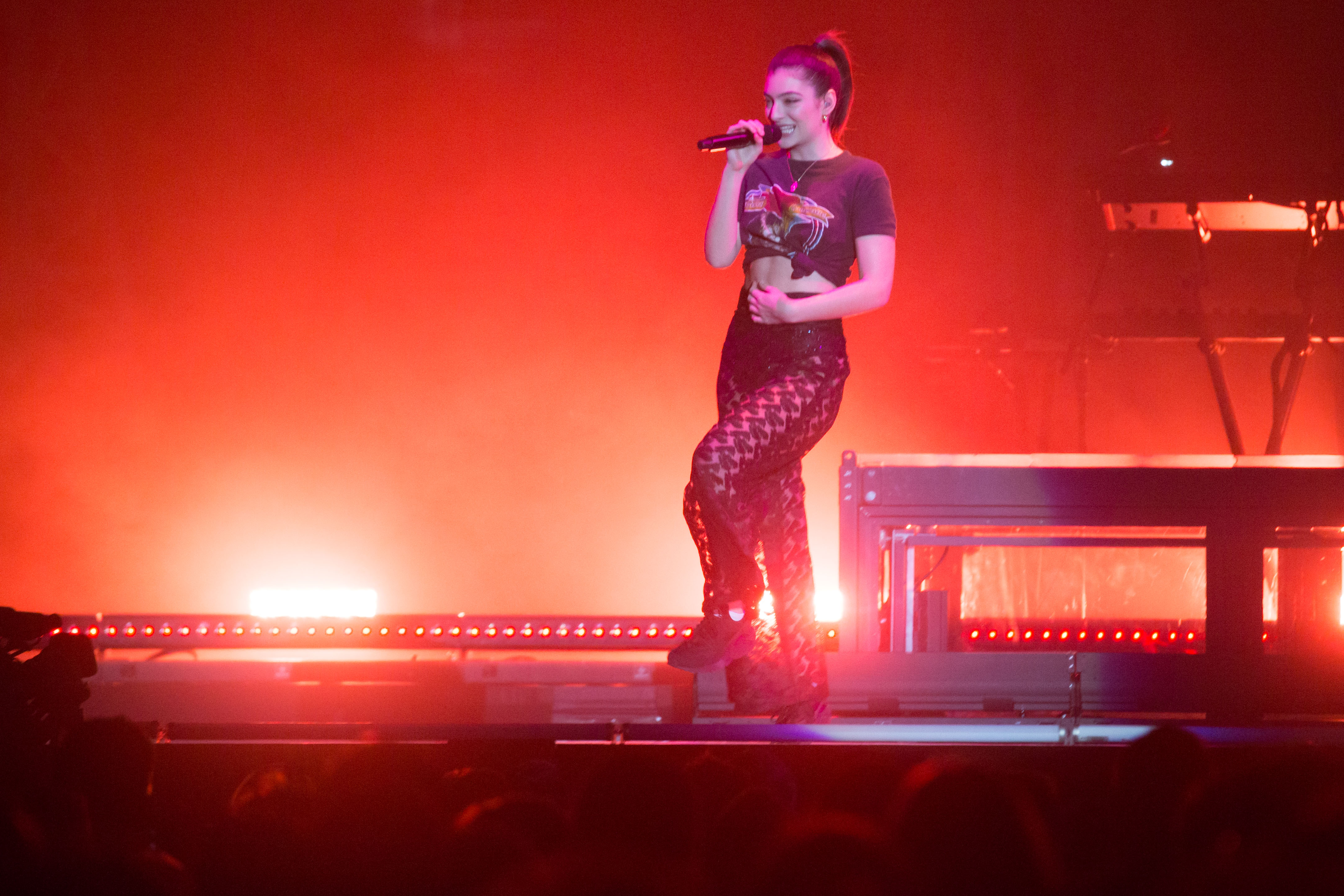 Shortly into the set, a translucent box rose from the center of the stage. Lorde climbed into it, blurring into a smoky haze that filled the shipping-container-sized structure. The dancers also invaded the box, bringing their choreography into a whole new setting. Lorde later did a daring on-stage wardrobe change in the foggy box, only stimulating the crowd even more. Later into the set, the structure rose far above the stage with a dancer still occupying the inside. During songs like “Yellow Flicker Beat” they tilted the box back and forth in an intriguing feat for the eyes.

“It’s so great to be here. You have such an incredible landscape. It’s not dissimilar from where I live, actually.” – Lorde

Lorde sounded great. Her performance of “Writer in the Dark” was truly breathtaking. Lorde inherently has a deep range, but through this track, she spotlighted how far she really can exhaust her voice. If by this point in the set, you still held any doubt for Lorde’s singing capabilities, this was the moment she brought you to your knees. She continued to pour out emotions in “Liability,” bringing tears to many eyes in the crowd. Then she asked everyone, “Do you all like Frank Ocean?” before covering a beautiful rendition of the musician’s track “Solo.” 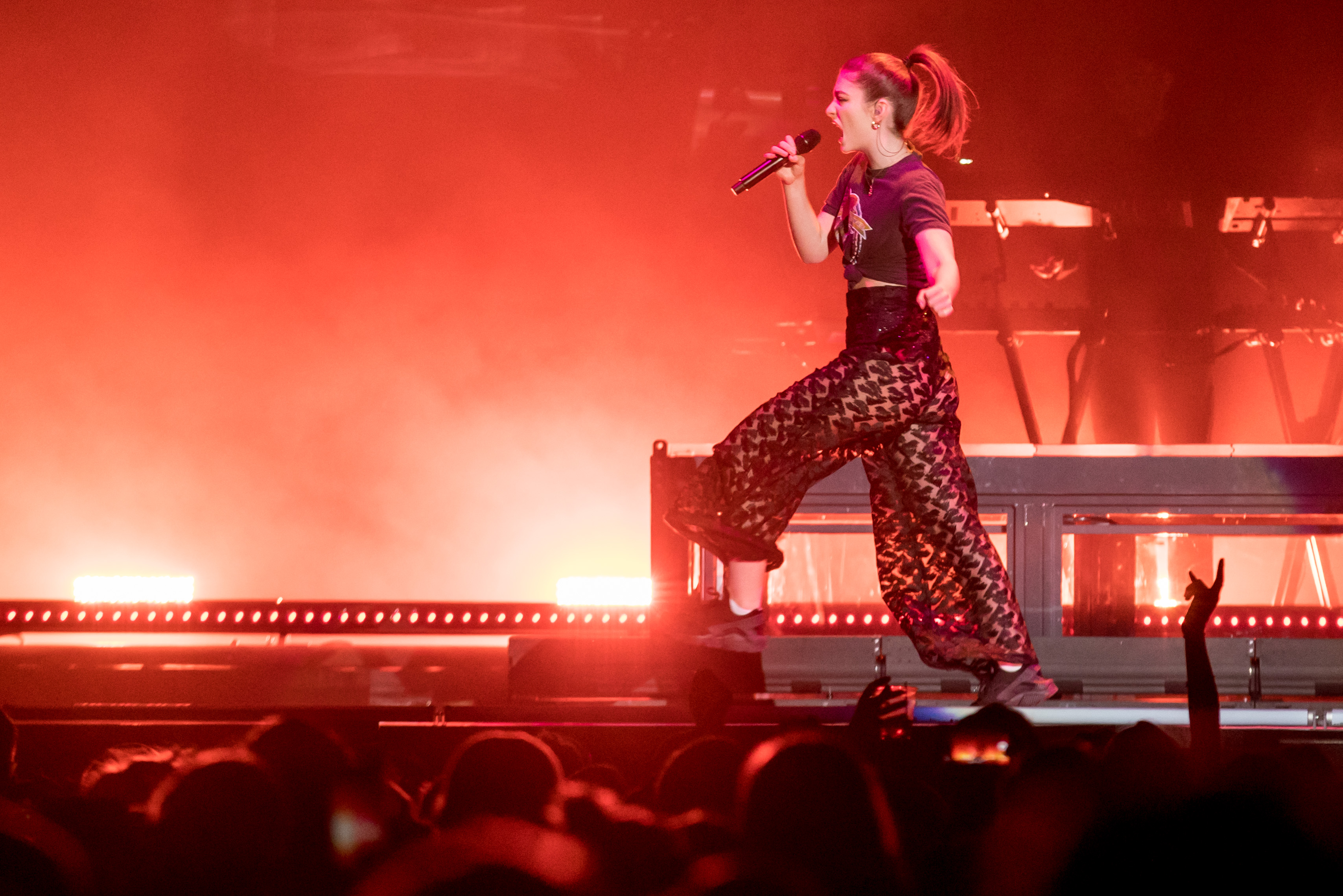 Truth is, Lorde knows her strengths and weaknesses and embraces them both. She’s a wonderfully intriguing, unique pop vocalist which shines most when she’s seemingly just being herself on stage. Lorde doesn’t mold herself into what most consider mainstream pop — glamour, ballads, scripted inspirational speeches, sexy dance moves, etc. Rather than striving for idealism like other pop stars, she cradles imperfection. But no one is perfect. Lorde showed us what’s paramount in this world — knowing and embracing your shortcomings. It was refreshing. Though we already knew Lorde was a crusader for authenticity — reflected in her music, public persona and album art — there was something truly great about seeing her ingenuity translated live. She may be famous now, but Lorde proved that nothing has changed — she’ll still never be a royal, and that’s why we love her.

Editor’s Note: A previous version of this article contained an error on Lorde’s cover of “Solo.” The article has been updated accordingly.