Q&A – Meet One of Denver’s Most Innovative Bands, The Milk Blossoms

It was a sunny but frigid day in Washington Park when we sat down with Denver trio The Milk Blossoms. Though dragged out into the cold in the middle of the day, all three sported smiling faces and positive attitudes, happy not just to be involved, but to be together. The trio charmingly burst into laughter when given direction for the photo shoot and, if anything, it became clear by the end of the interview it’s not that they’re just friends, nor just a band — they’re a family.

The Milk Blossoms are nothing new for Denver — they’ve been making music for eight years as a group, with the addition of being involved with other Colorado groups. Lead vocalist and ukelele player Harmony Rose has played in several other local bands. So has keyboardist Blair Larson who also now has a solo project titled Manila Dean. Michelle Rocqet — beatboxer and vocalist — currently works with Denver music education nonprofit Youth On Record as a teacher and part-time operations manager. What makes the group especially unique is their style of dark-pop that utilizes beatboxing, poetry and ukulele strumming. Their shows are one of a kind and unforgettable. Just last week the trio opened the show for Grayson County Burn Ban’s album release, performing much of their upcoming sophomore album. We sat down with The Milk Blossoms to talk about the new album, the mechanics behind their group, their 2018 New Year’s resolutions and more. 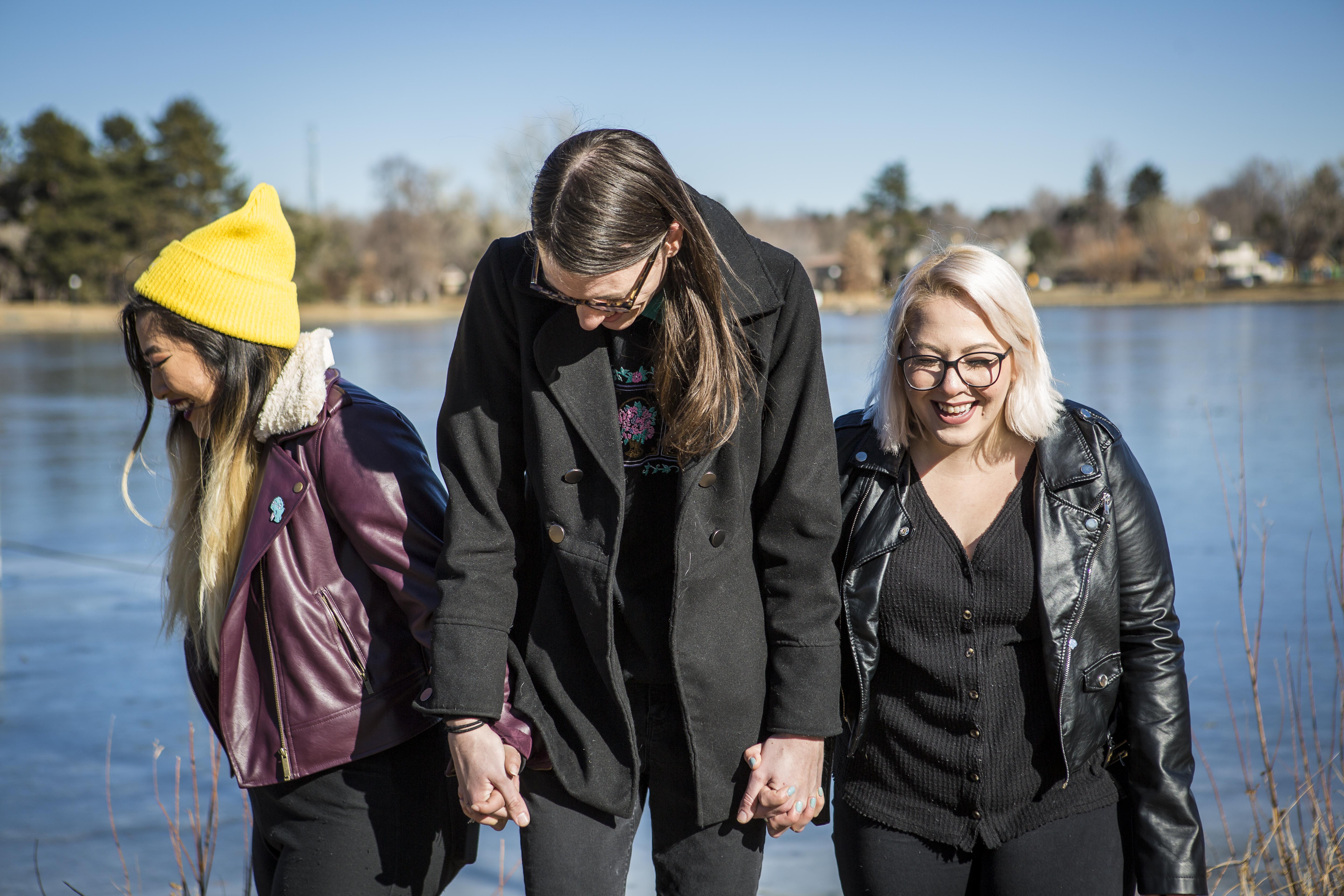 303 Magazine: Why did you name your group The Milk Blossoms?

Harmony Rose (HR): We were called Architect for a really long time and we knew that that wasn’t going to work out because there was another band called Architect. It was actually our friend Randy Chambers who came up with it just on a whim.

Michelle Rocqet (MR): I think it spoke to us on this level of intense specificity of the feeling and the moods we go for in addition to [the fact] that time has an expiration. Like, milk and flowers — they both have times of expiration and that’s sort of how we live our lives in addition to how we try to translate that into our music.

Blair Larson (BL): I joined the group in 2012 — just a couple of years after they [Rose and Rocqet] started. Michelle and I met at school and I saw them play and it was amazing. It was so sincere and beautiful. A lot of the music that I love, it involves the space between the sounds and they really played the space between the sounds. They didn’t let anything get in the way of their singing and their lyrics. I thought that was so cool and I just wanted to add that little extra layer — like the frosting on a good cake. 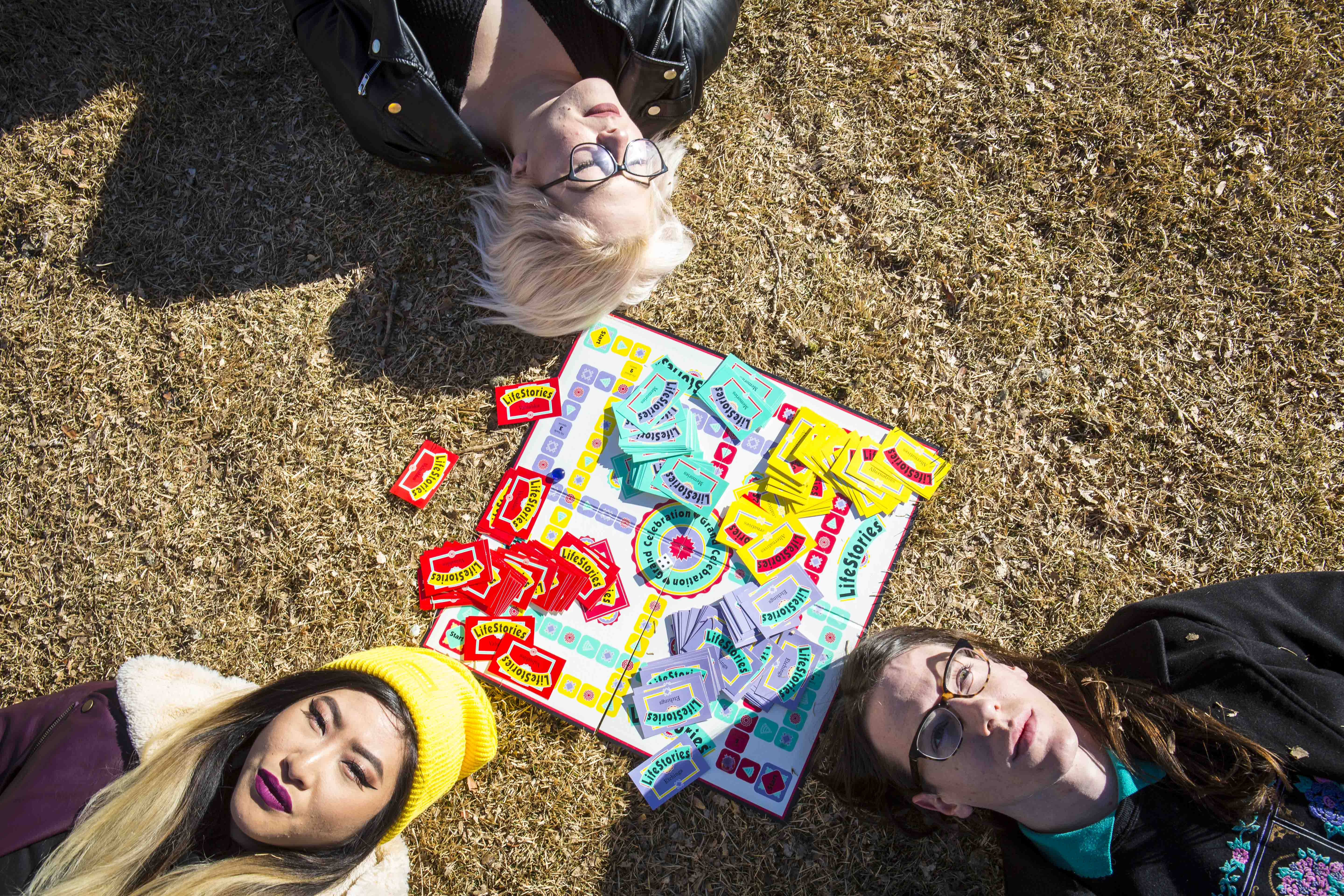 303: Speaking of lyrics — Harmony, are you the sole contributor of lyrics for the band?

303: A lot of it is really poetic — there’s even some spoken word thrown in there. How does that inspiration come to you?

HR: I love to write poems. The poems usually come before the song because the poem on the page is where all the truth is, and then when I start walking back and forth on two chords I can make whatever that poem that I wrote more fitting for a song — I can shorten the words and whatnot, I can make a concept that makes more sense in music. I read a lot of poetry. I’m studying poetry at CU Denver.

303: Do you think the inspiration comes more from your life or from your experience as a band or a merger between the two.

HR: It’s pretty much my life. If there’s a couple of lines I put in there about being in the band, it’s not so much about the band, it’s more about playing music in front of people in general in a city. Sometimes I just trip out on the fact that I go up on stage and I sing and tell people things because I’m not really like that. Like, I am intense and when people know me I can tell them everything but in general, it still really blows my mind that I’m so vulnerable. 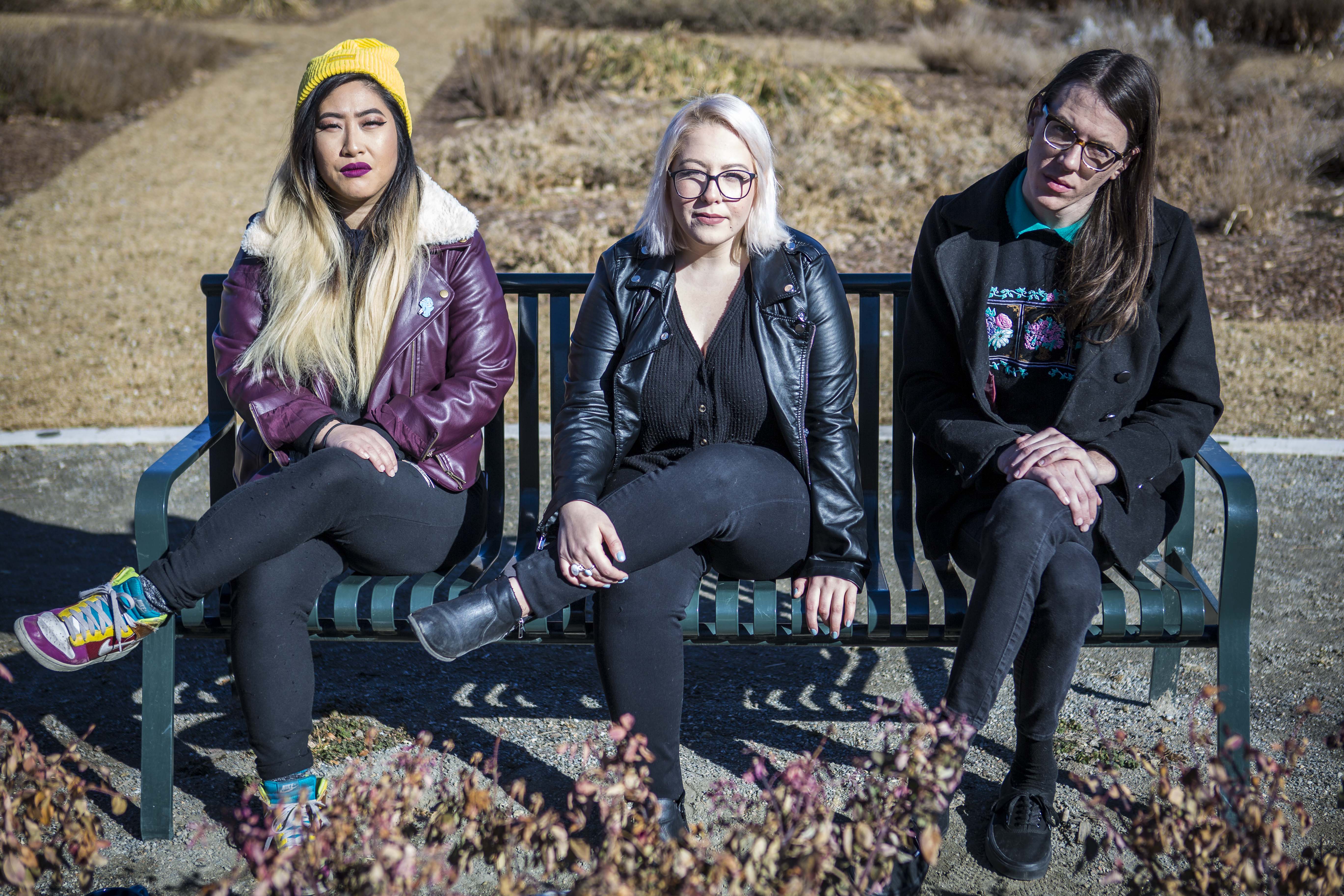 303: Do you have any New Year’s resolutions?

MR: I don’t really do New Year’s resolutions I usually do birthday resolutions — that’s sort of a new year.

303: What’s your birthday resolution for this year?

MR: I think it’s going to be — if a person in a conversation says a word that I don’t understand the meaning of I’m going to ask them because it’s easy to pretend you know the word and then you’re out of context [laughs].

HR: My true resolution is to put out a poetry book — just release it myself, nothing fancy.

303: That’s awesome. That’s a good resolution to have. Blair?

BL: One sort of resolution is — and I’m going to say this in a cool poetic way — I put too much pressure [on myself] to write perfect music and sometimes it’s not perfect. Sometimes the things we do are not even that good and I think I’m going to try to be okay with that.

303: No one’s perfect. Sometimes when you set your standards really high it’s hard to accept something when it doesn’t hit 100 percent. I can be the same way.

MR: Yeah. Perfectionism can be a restriction as opposed to a goal or as opposed to an encouraging factor — it implies down you because you’re never going to reach perfection. And recalibrating and understanding quality over a product is a good resolution. 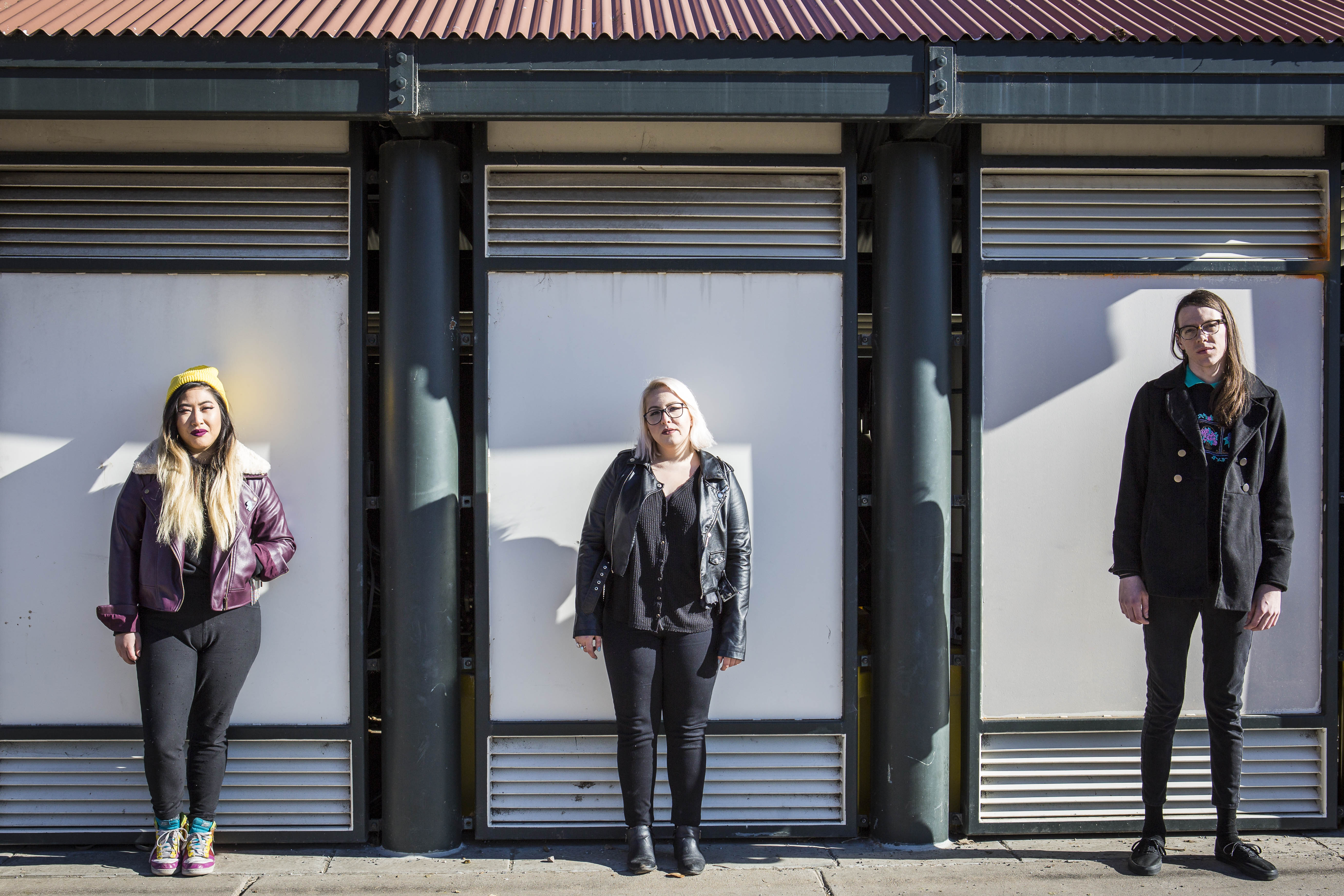 303: What other Denver musicians are you really digging right now?

The Milk Blossoms: [in unison] Noooooo!

HR: Good for him.

MR: There are so many. 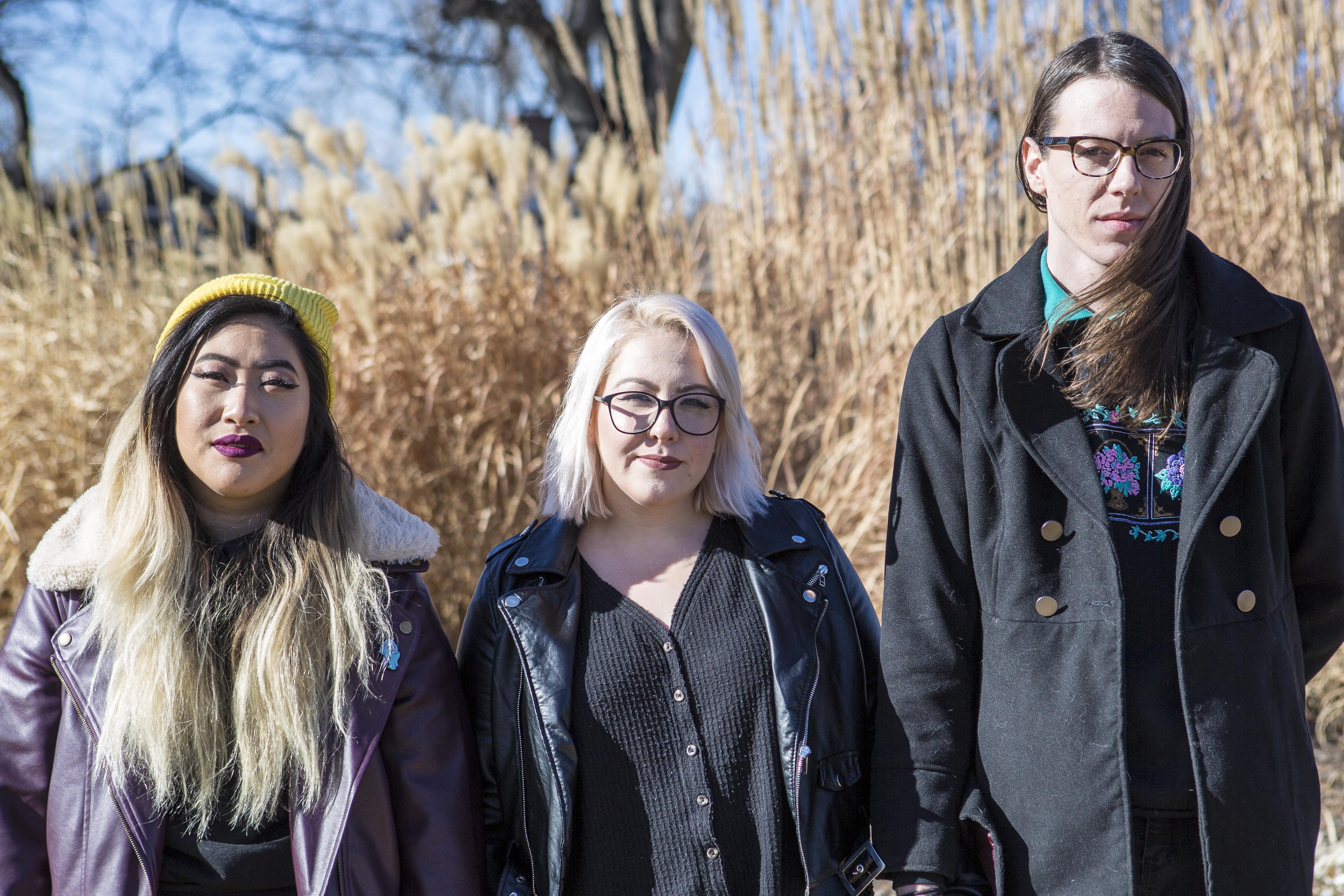