So, we did a lot of eating and drinking this year. Almost 400 food and booze articles worth, to be exact.

While this city keeps packing in the restaurants, we keep stuffing our faces, trying to find the best of the best. To quantify our efforts, we polled our staff on the best bites and sips of the year, and we threw in a few bonus friends.

Read on to read what we couldn’t stop eating in Denver this year. 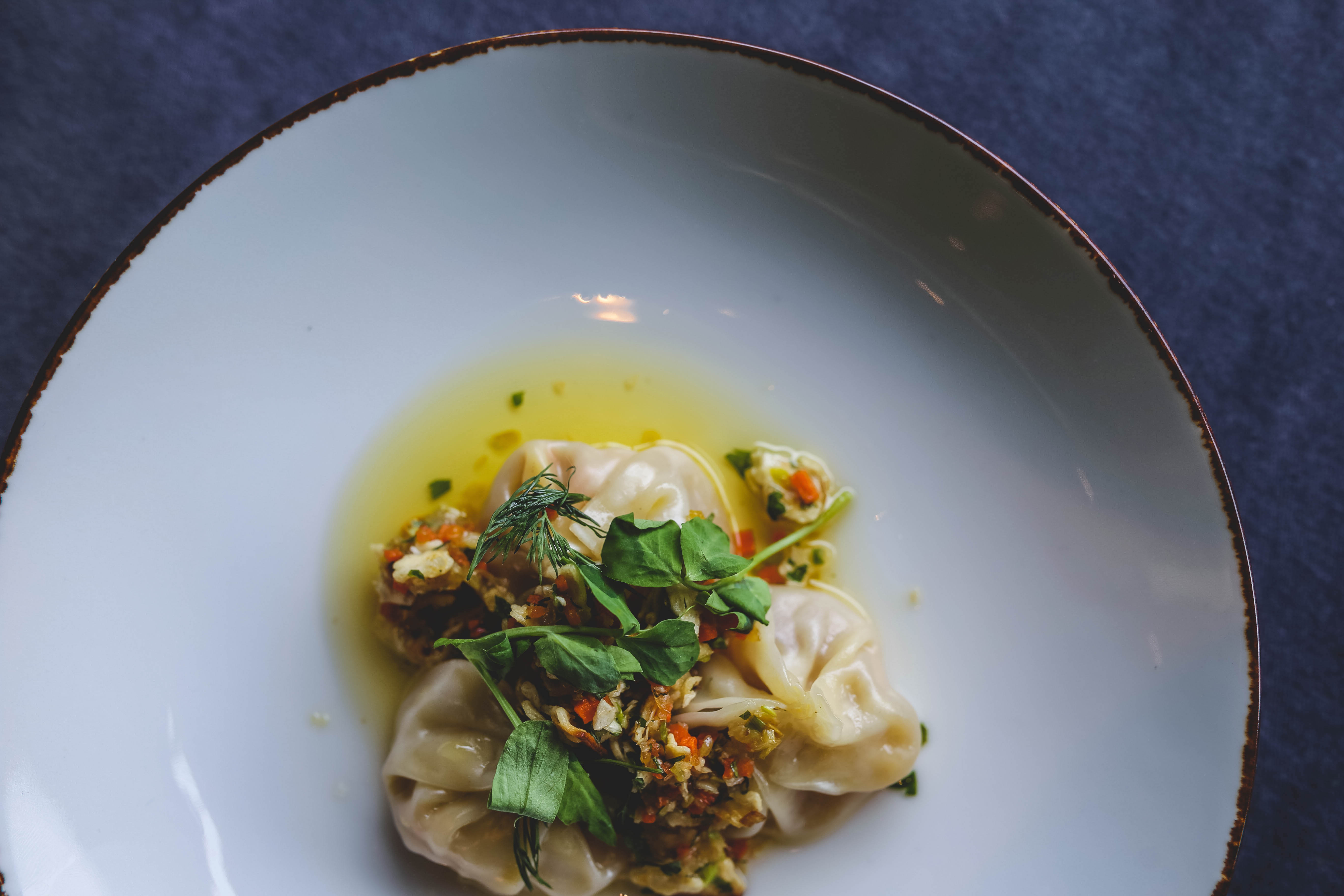 “While my favorite foods tend to be casual — like a cheeseburger and fries — I do love dishes that I know I could never (and would never) try to make at home. This year, El Five’s Matzah Ball Soup Dumplings ($12) with mirepoix, chicken bouillon, schmaltz, lemon olive oil and dill really did it for me. They’re super comforting, but unexpected and light. If the El Five team finds out how often I talk about these, they’ll likely issue a restraining order. ” 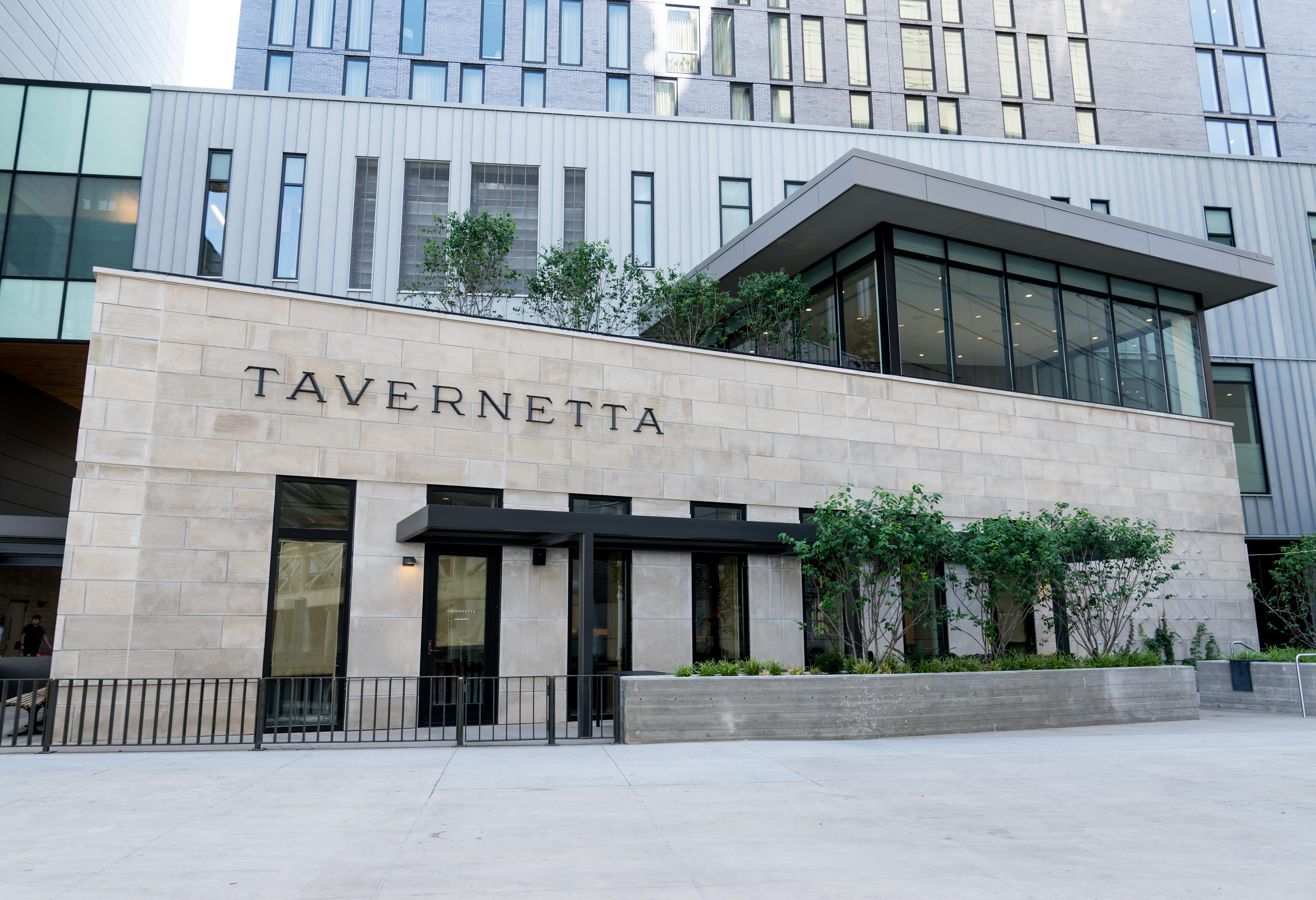 “When Tarvnetta announced it was coming to Denver, I was excited (like most people familiar with its sister restaurant, Frasca). But to be honest, it wasn’t super high on my list for anticipated openings, mainly because I had a lackluster dinner at Frasca with my family several years ago. I had overhyped Frasca so much that they still don’t let me live it down. So when it came to eating at Tarvenetta, I was cautious to not overstate the excitement to my dinner guest. Fortunately, the meal was flawless. Everything from the impeccable wine selection to the service and even the complimentary bread was perfection. However, my favorite thing was maybe the most simple. The burrata ($12) served with Trapanese pesto, breadcrumb and herbs, was so fresh it was recognizably different than any other burrata I’ve ever had. It’s was almost like drinking a glass of cold milk because of its light and silky texture. One bite of that and I was sold. I can confidently say, Tavernetta lives up to the hype.” 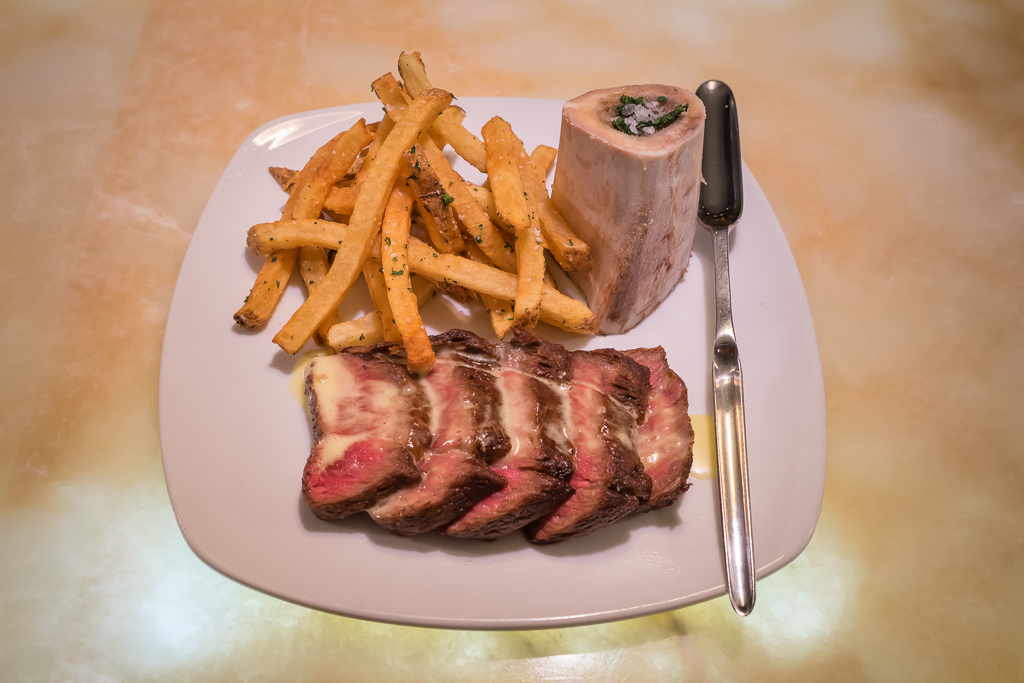 “My favorite meal of the year may have to go to St. Ellie’s steak frites ($17). Certainly assisted by the low-lit ambiance and elegant, know-exactly-when-to-drop-by service, the straightforward plate of fries, bearnaise and a six-ounce dry aged steak was done to such perfection that eating it improved my table manners — I was forced to address its grace with equal measure. While certainly decadent, the plate is reasonably inexpensive and feels like a treat but not an overwhelming indulgence. For a full, unfettered experience enjoy alone and undistracted.” 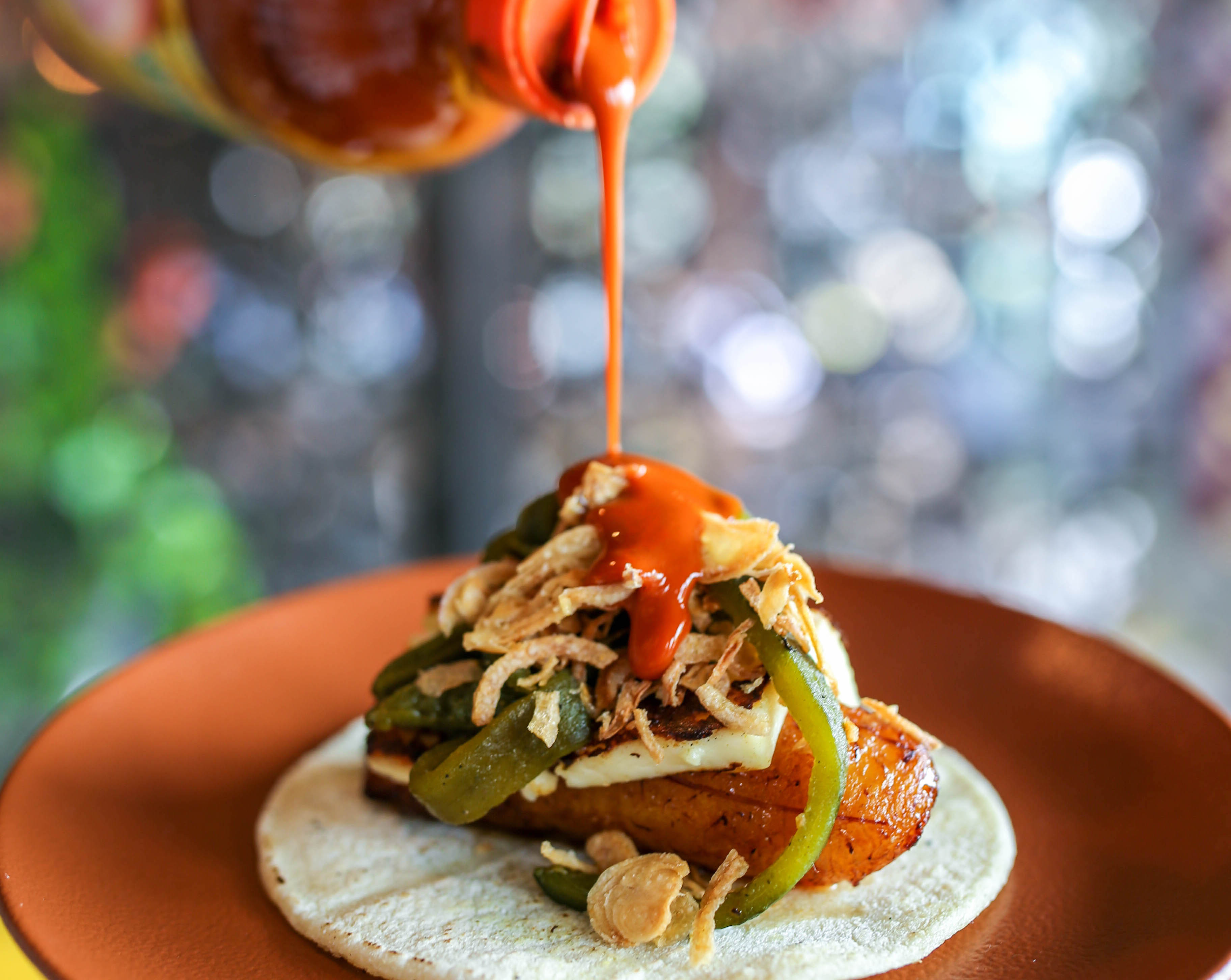 “In June of this year, Candela Latin Kitchen took over the corner storefront previously occupied by Central Bistro in the LoHi  — since opening this kitchen has been cranking out affordable and delicious coastal Latin American. The sweet plantain taco ($4) comes topped with fire-roasted poblano, queso fresco and crispy shallots for a sweet and savory, handheld vegetarian delight. It is most definitely my favorite bite of 2017 — it is a step above your traditional street taco, a single order is absolutely a tease. I recommend ordering at least two at a time to save your server the immediate trip back to the kitchen for your seconds. While you’re there grab a Candela Colada ($9) off of the signature “Rum Room” cocktail list while you’re in  — it is undoubtedly one of the best rum sippers this city has to offer.” 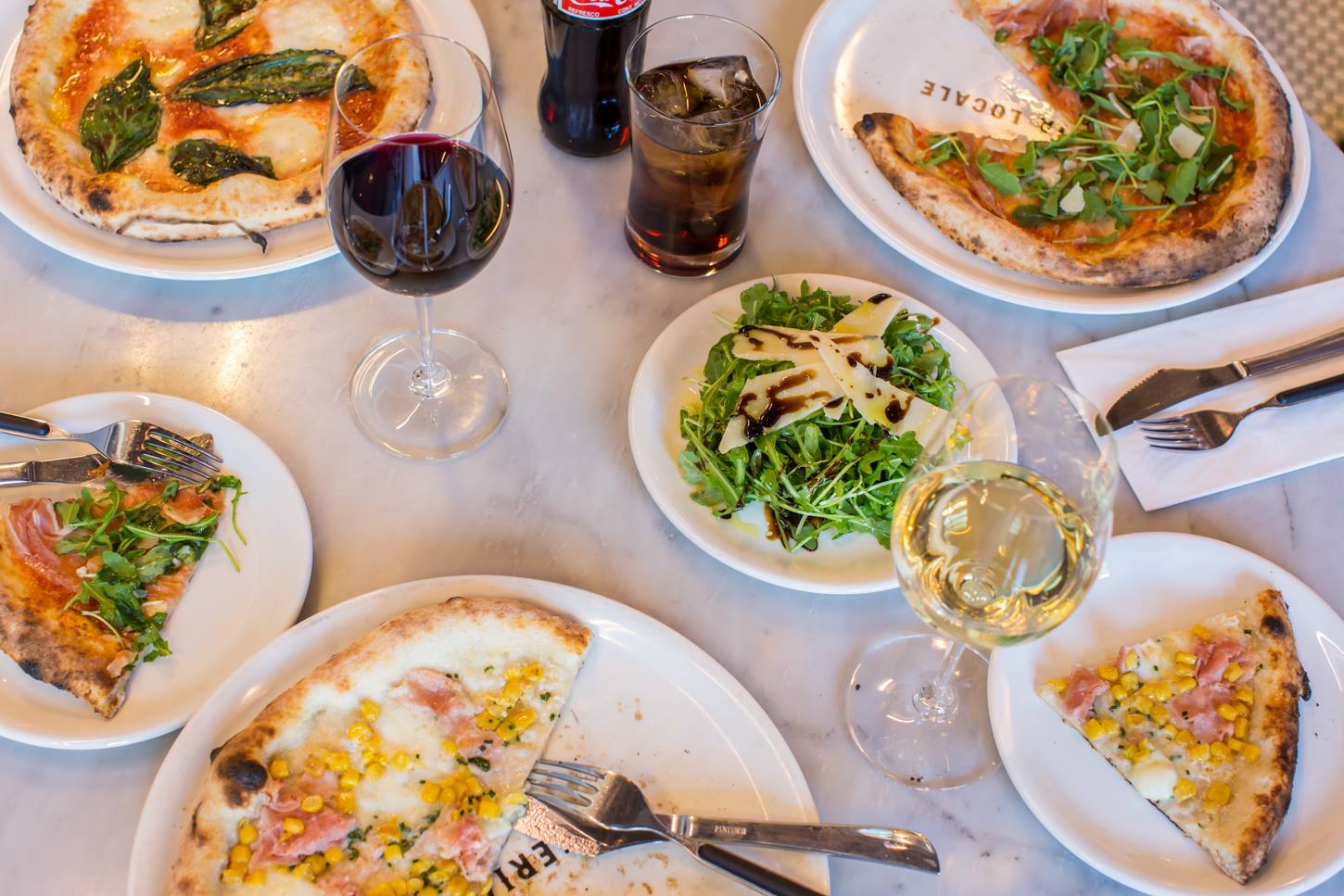 “Pizzeria Locale on Pearl Street had some of the more authentic, Italian pizza I’ve had in Colorado—and gluten-free! In my first few weeks, I got to sit next to their open wood-fired oven, drink an Aperol Spritz and indulge in this bad boy—a gluten-free, four cheese & mushroom pizza. Oozing with mozzarella, smoked mozzarella, gorgonzola and parmesan, topped with forest mushrooms and dressed in olive oil. It is finished off with a perfectly thin, crispy crust that balances out the indulgent cheeses. Back to the basics for a taste of Italy and a delicious, cheesy win.” 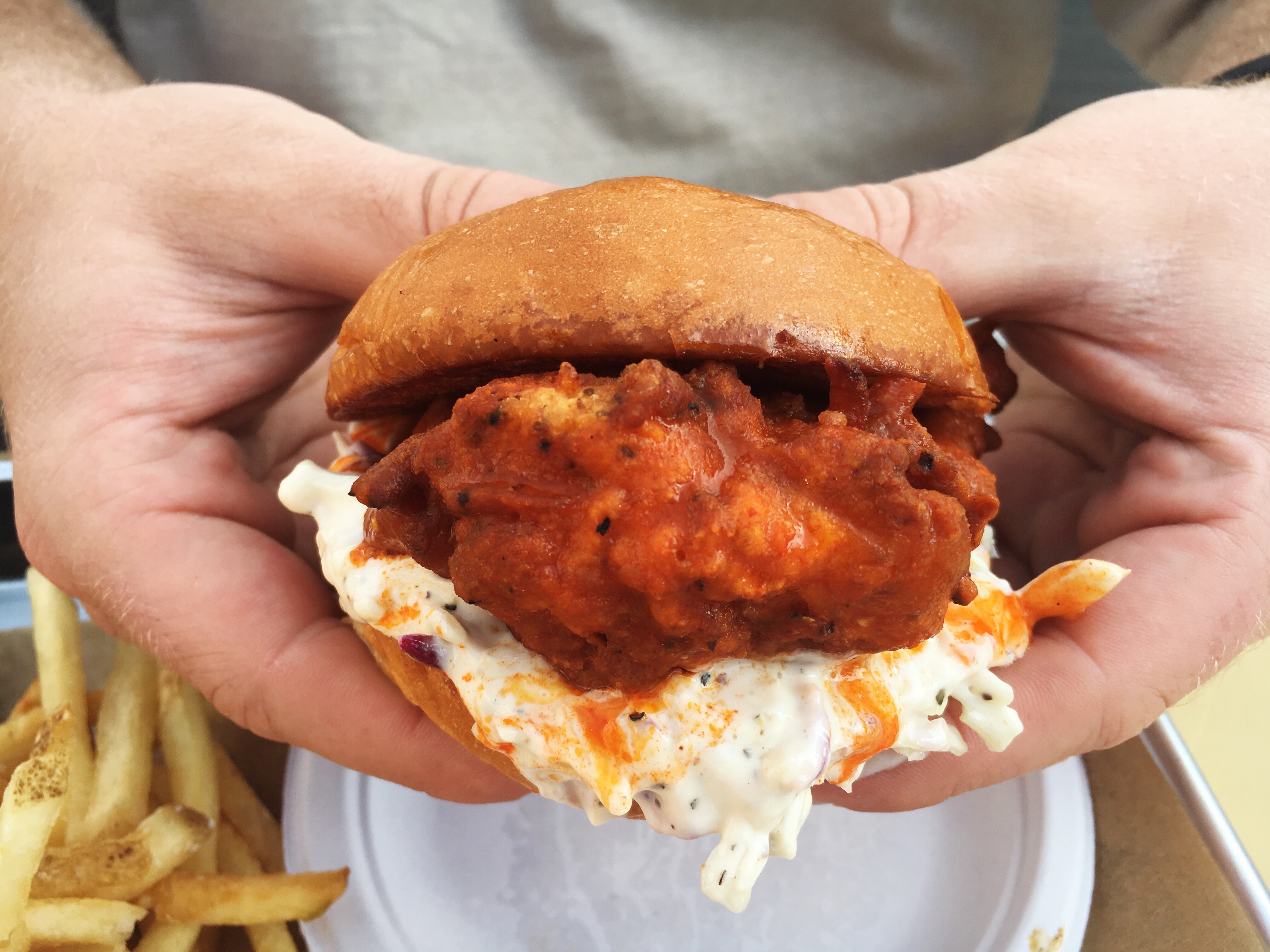 “It can be hard to come by a quick take-out spot with quality food – yet Birdcall has fulfilled that need. I’ve never been a chicken sandwich person per se. The only one I can remember before this one is Chick-Fil-A. Birdcall opened up a few blocks away from me. I saw that it had a Nashville Hot Chicken Sandwich – and I was sold. A warm, buttery Aspen bun, crispy chicken doused in Nashville Hot sauce and a couple pickles – absolutely perfect. The combination of the soft bun, the crispy tenderness of the chicken, the peppery hot sauce and the acid of the pickles makes for the best chicken sandwich of all time. You have to try it for yourself.” 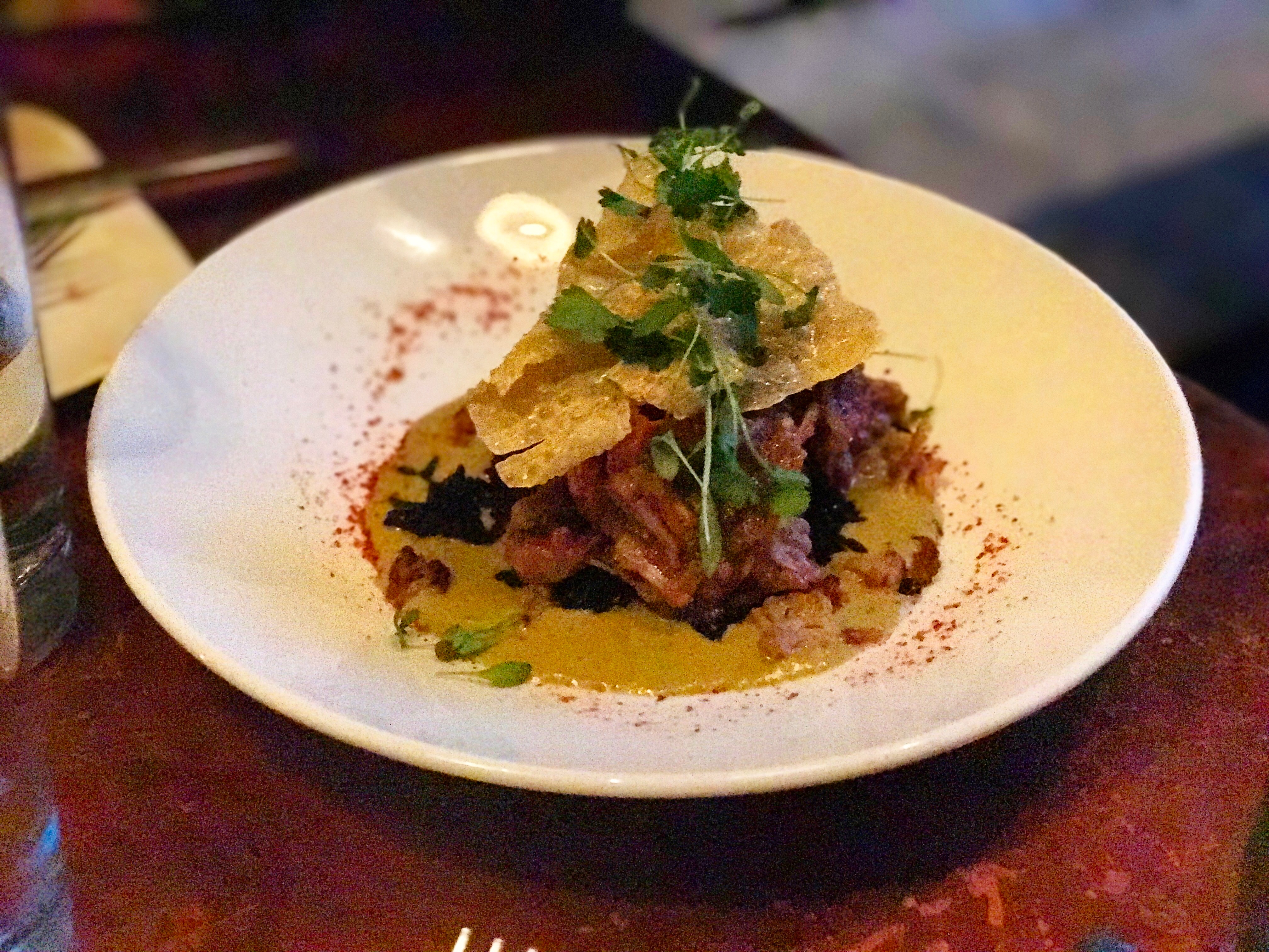 “Nothing is better than a dish that just plain surprises you. Back in May, the green curry jackfruit at The Populist did exactly that for me. Jackfruit is commonly used as a chicken or pork substitute, but you don’t see it used a lot around restaurants in Denver, so to have it done so incredibly well was a great treat. The meaty jackfruit sat atop the green curry, so each bite wasn’t overwhelmed with spice. At one point, I even forgot that I wasn’t noshing on some tasty pork and indeed chowing down on some Thai-inspired fruit. I’ve recommended The Populist to anyone looking for recommendations in RiNo ever since.” 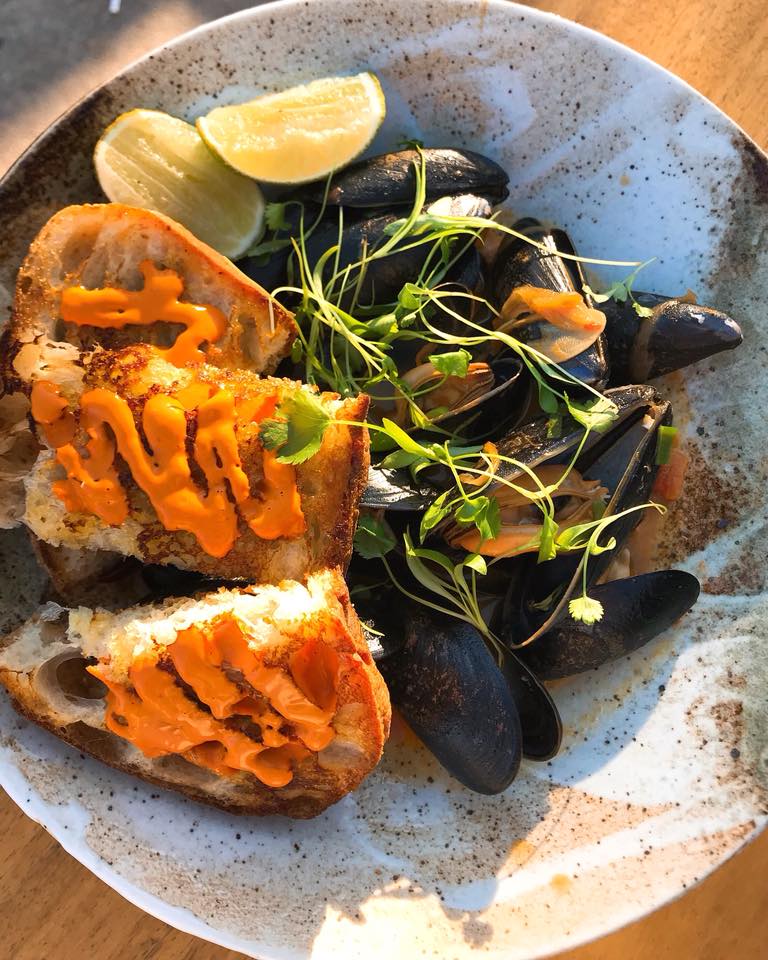 “My first full year on the food beat for 5280 has included so many delicious dishes that it’s impossible to choose just one! Instead, here’s a standout from December: the Bang Island mussels with ají soy butter at Señor Bear.” 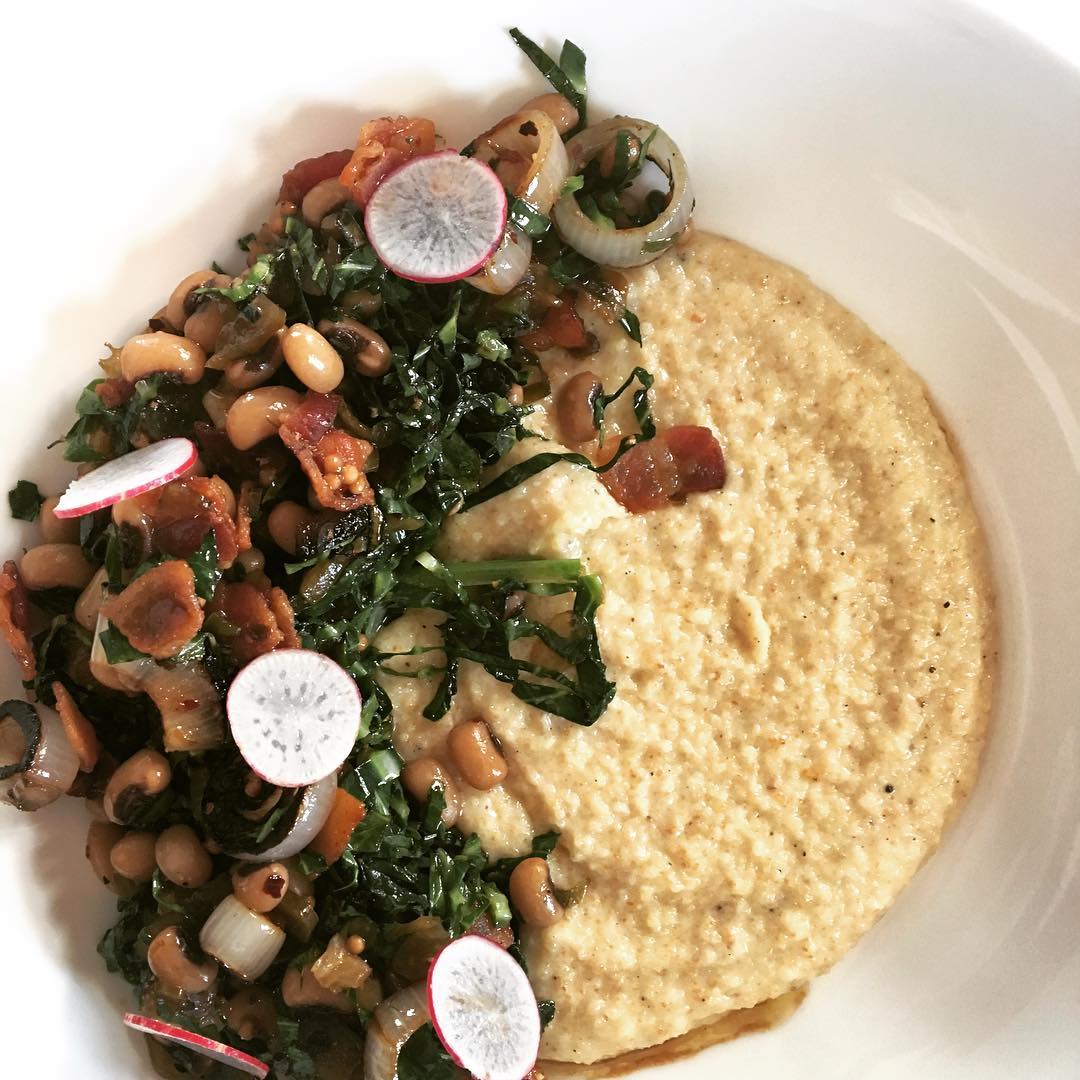 “Obviously there are too many to count, but I’m sad to say that the first thing that comes to mind is from a place that closed: Masterpiece Kitchen. The creamed cornbread and collard greens in molasses vinaigrette with black-eyed peas and bacon gave the humblest of ingredients their due, hearty and soulful yet plated so beautifully. I’m choosing it as a reminder to Justin Brunson that many of us still hope he’ll reopen the place in one form or another.”

A dish being plated at Hop Alley. Photo by Noah Berg.

“Bang bang sauce on basically anything at Hop Alley, and the Dan Dan noodle dish at Hop Alley. Also, that truffled risotto at Mercantile, seafood sandwich at Tammens Fish in the Central Market, the seasonal salad with ricotta at Cart Driver, all the desserts at Emmerson, the chicken liver mousse at Dio Mio, the chicken sandwich at Ste. Ellie, pig part of the day at Rebel (grilled heart with roasted beet and house toast) and the half chicken at Acorn.”

Co-Owner, The Way Back & Wayward 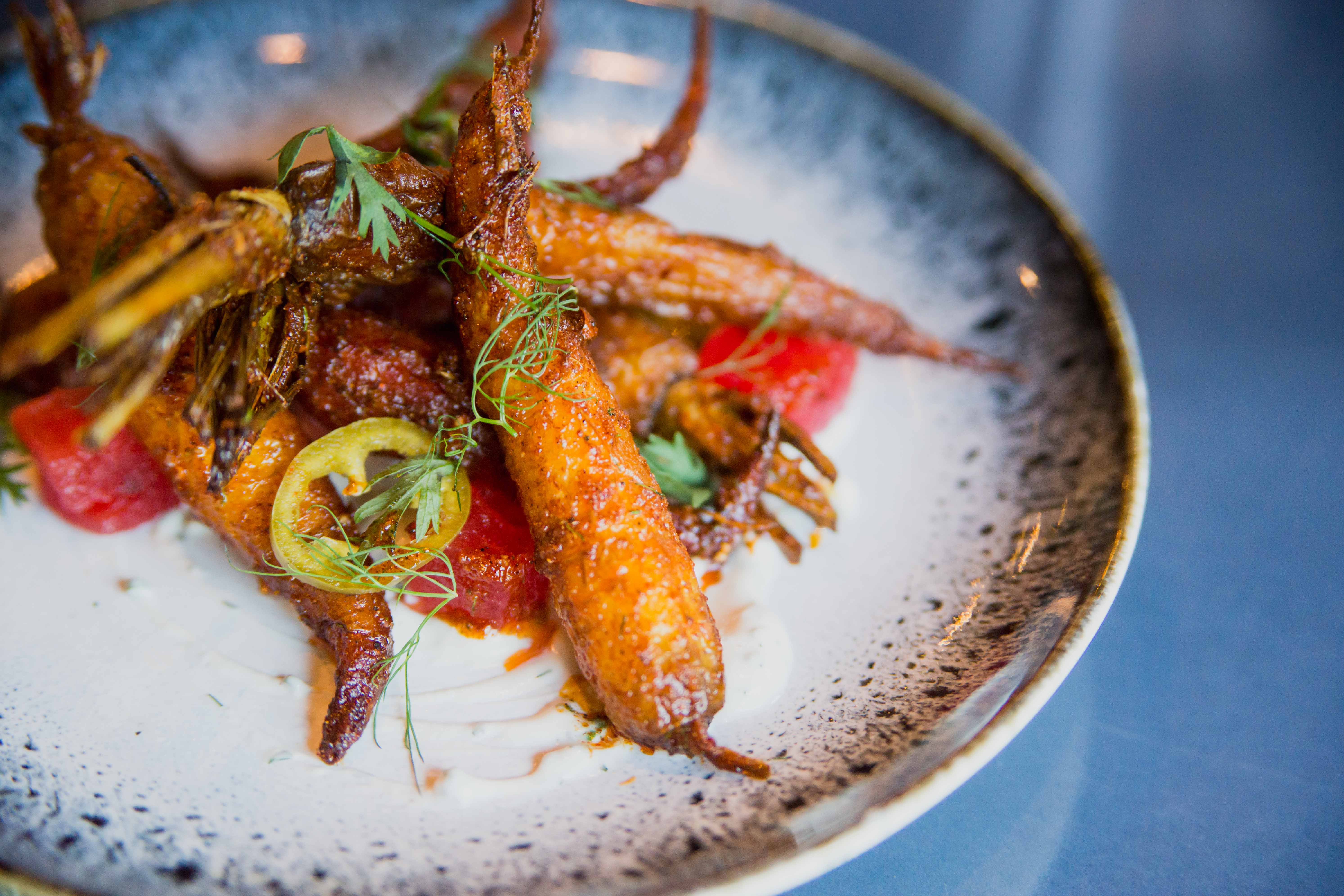 Want more? Check out what Denver chefs had to say.