“Tonight, food becomes art.” Those were the opening words from BBVA Compass’ El Cellar De Can Roca dinner in Denver last night.  The invite-only meal was a part of the only US pop up the restaurant has planned for this year and it was indeed anticipated to be a master class in food artistry. Rated as one of the best restaurants in the world, El Cellar hails from Girona, Spain, a cultural hub for the Catalan region, which is currently in a battle for independence from the Spanish central government.

READ: One of The Best Restaurants in The World Chose Denver For Its Only US Pop-up

When asked if the current political upheveal has at all influenced how Jordi Roca, the only Roca brother of three who attended, cooks, he said the impact has been non-existent. 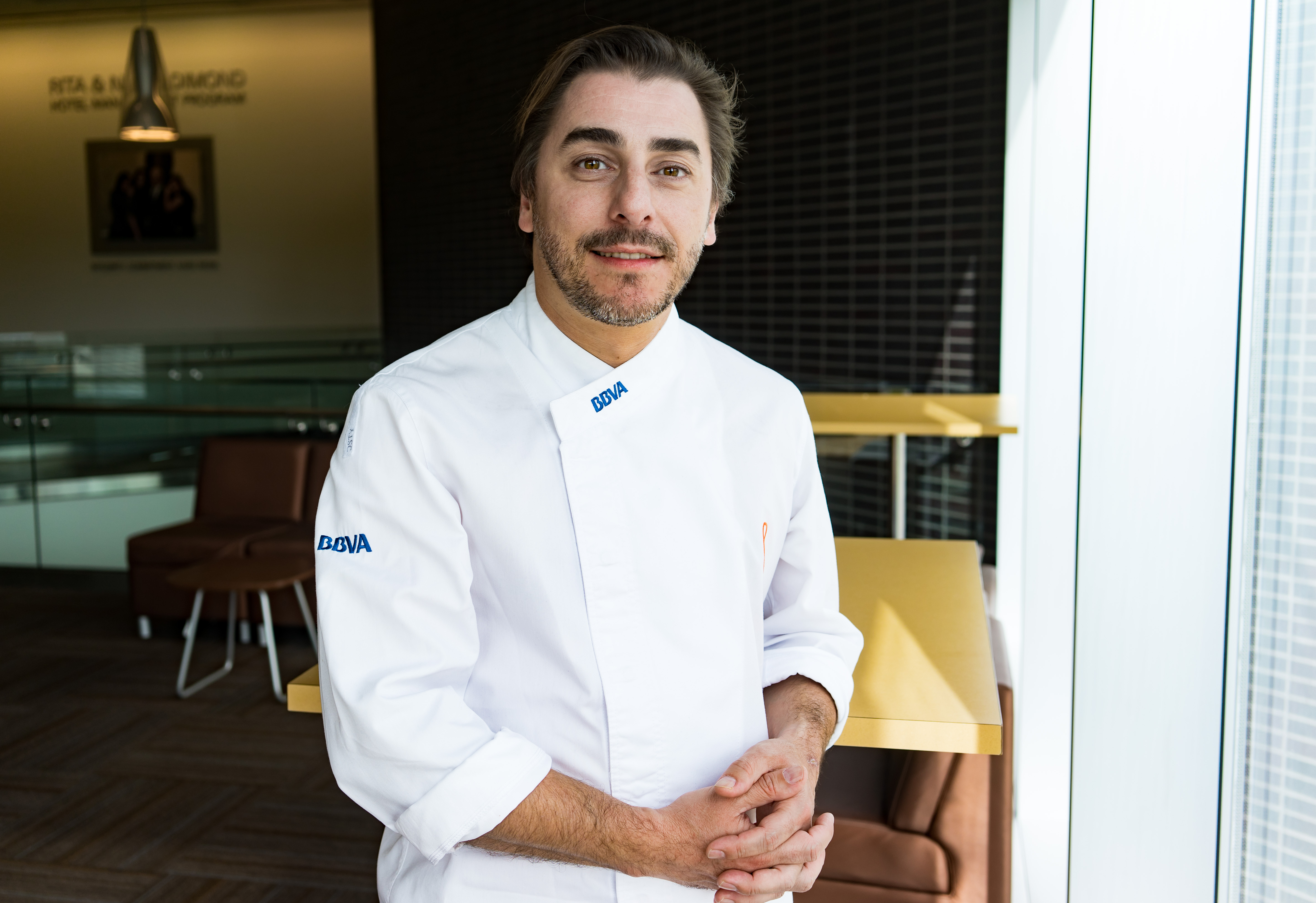 “Our role as restaurateurs and gastronomists [is] we believe that our restaurant is a place for friendship, and fraternity for different cultures or difference of opinion and they are all welcome so it has not influenced it at all,” he said. Roca spoke in our interview and during the dinner through a translator due to a language barrier as well as losing his voice upon arrival in Denver.

What Roca did not lose was his panache for intricate desserts. During a discussion with culinary students at Metropolitan State University (MSU), he described his sources of inspiration. Among them are using perfumes to break down tasting notes for a dessert. For example, if a perfume has notes of vanilla, sandalwood, and bergamot you’d also find those flavors in the dish. Last night, one dessert was accompanied by paper cones misted with perfume. Called “Lemon Cloud,” diners had to inhale the fragrance before digging in. Roca, who often tries to evoke emotion with each dish, explained the intention was to “inspire tenderness.”

“Some of the flavors you may find in this dessert: toasted butter, milk. Those are very clean flavors and this is what we are trying to inspire. As when you are tasting it, it is almost the smell of a baby,” he said.

This method of dissecting tasting notes was also found throughout the rest of the meal. Except instead of perfume, several dishes used the characteristics of wine. For example, the third course (out of 9) took an oyster, split it into five parts and topped each piece with a different “note.” So there was green apple, algae, distilled earth essence (which used black truffles), mushroom and lemon puree. Was the dish delicious? That’s debatable based on mixed reactions from the table. Because like most of the plates served that evening, ingredients were displayed in their most distilled form. As a result, the powerful flavors, which were often seafood-heavy, could be divisive.

What’s not debatable was the beauty of the visual presentation of the meal. In particular, a sea bass came speckled with thin sheets of vegetables that, when assembled, looked like a watercolor painting. The opening dish was also impeccable when it came to presentation. Moments after we took our seats, a black paper balloon sailed into the dining room and landed on our plates. Then the team of servers pulled a satin ribbon to reveal a wooden block with five savory bites. Each one, about the size of a quarter, represented different countries the Roca brothers have toured. There was a miso creme ball that exploded with umami to represent Japan, a fried pork belly with soy sauce and kimchi for Korea and spicy lamb with oregano and tomato for Turkey.  Aside from the Iberico suckling pig (the final savory course), this was a unanimously loved dish, and best represented the creativity of the Roca’s and their skill in the kitchen.

Where the Roca’s really excelled was with their wine. Even the sherry, which at first confused many diners as to why it’d be paired with mackerel, was incredibly delicate and balanced. A dry iteration from Jerez, Spain, the 12-year sherry had an intensely boozy nose similar to a scotch but had the soft taste of caramel and citrus. The Tempranillo, one of Spain’s most famous wines, was also exceptional. A 2009 bottle, the wine hailed from  Spain’s best-known winery, Vega Sicilia.  It had aromas of leather and berry with flavors of baked black fruits, vanilla and chocolate and perfectly paired the Ibérico suckling pig Spain is famous for.

In the final moments of the event, scholarships were awarded to two students from Denver. According to Roca, each time they visit a city they try to offer an opportunity to students to expand their culinary practice. For Denver, the students at MSU helped prepare the dinner, working hand in hand with Roca himself. Then for the two lucky scholarship winners — Brandon Hart from ACF Colorado Chefs Association and Eosther Fajardo-Anstine from MSU-Denver — they landed a four-month internship at the El Cellar de Can Roca.

Roca looked genuinely excited during the announcement and affectionately embraced the students with open arms. He earlier explained how the most striking part of Denver was how welcoming its people are. “They made us feel like home,” he said.  After seeing the sheer excitement of the winners and the general enthusiasm from the crowd, it’s undeniable that a piece of the Rocas will always have a home here in Denver.