What You Missed From Denver Fashion Weekend Fall 2017

Denver Fashion Week(end) (DFW) has come to a close, leaving us inspired and breathless. Three nights brought three very different shows that included a variety of firsts for this groundbreaking event, now in its 10th year. After countless hours of conceptualizing and planning, it all passes by in a flash, so we put together some of the best moments from Fall 2017, so we can bask in sheer delight just a little longer.

Runway producer, Charlie Price, has been with DFW since the very beginning. He and his team of creatives, called Beauty Underground, helped elevate this year to new heights. “The people coming to Denver have more of an appetite for fashion and more interest, which I love,” he said. “We really have to continue to evolve in response to that.” Night one echoed Denver’s evolution with a strong showing of both local designers and boutiques as well as a line straight from New York Fashion Week. Then on Night Two, we honored a legend in the fashion community. For the first time ever, Night Two featured a runway takeover by Garbarini, a local boutique that has been at the center of fashion for more than 30 years. Terry Garbarini selected looks from 10 of the world’s top designers, all of which are available at the boutique. This provides us with the opportunity to not only fall in love with the fashion but add it to our personal collections as well. Also new this year, Night Three teamed makeup artists and hairstylists from all over the country with local fashion designers. The result was an awe-inspiring show that shattered traditional definitions of beauty and gender.

All Night One Photos by Kyle Cooper. Go here to see the full gallery.

Night one began with Denver’s Jesse Mathes. She set the bar high for the rest of the weekend with her intricate metalwork that elaborately encased her models with rods of aluminum, copper and brass. Instead of evoking a sense of entrapment, the designs imbued them with power and strength. Many of her pieces came from her “Territorial Defense” collection which is inspired by aggressive interactions with men and the need for personal boundaries. According to Mathes, her collection was influenced by Queen Elizabeth I of England, whose “gowns and jewelry enlarged her presence physically and asserted her dominance over her subjects — including the many men who wished to usurp her power.”

Next up, Royal Outerwear maintained the strong attitude of Mathes’ work, but took it to street level. The local designer, whose shop is just blocks away from the event, used a neutral palette mixed with eclectic patterns to give us an urban luxe line. Nuorikko then softened the scene with custom wedding gowns. The local shop utilized non-traditional bridal silhouettes, capes and separates for sophisticated yet modern looks. Velvet Wolf, a Denver boutique, took a similar route as Royal Outwear and featured more casual apparel that came with a bite: Leather, fur and denim mirrored popular trends in modern streetwear with an undertone of punk.

Last, but not least, was John Paul Ataker. A family-ran NYC/Istanbul design house, the line featured impeccably tailored gowns and separates. Similar to Mathes, it also channeled medieval England. But instead of metalwork, Ataker used high necklines and thick textiles to give the models a chaste yet intimidating power. Many of the looks drew from Catholicism, which makes the Fall/Winter 2017 line incredibly timely with the recent announcement of the Met Gala theme.

Night Two combined the magnetism of haute couture with the relatability of ready-to-wear, as local boutique, Garbarini took over the runway. “Garbarini is where women have always gone to feel beautiful and high fashion without trying too hard,” said Price. “This show is about confidence and glamour presented in a very consumer-friendly way, because people can go to Garbarini and buy anything they see here tonight.” In total, 10 designers from all over the world—including the legendary Diane von Fürstenberg—took the audience on a journey, each presenting five looks that ranged from edgy to elegant.

Italian outerwear designer, add, got right to the heart of what it means to be Colorado chic, with an outerwear collection that was anything but clumsy and misshapen. Models wore beanies, tailored down jackets and athleisure pieces accented with dark sunglasses, giving this segment of the show a cool streetwear vibe that felt perfect for this time of year.

New York-based fashion label, Theory, showcased menswear-inspired pieces in a neutral palette warmed with shades of merlot. The overall aesthetic reminded us of Katharine Hepburn, whose androgynous charm made her an integral part of the evolution of fashion in Hollywood. Diane von Fürstenberg, the iconic designer responsible for introducing the world to the wrap dress, also created an air of female strength and confidence with impeccably tailored suits, structured coats and minimal accessories.

The pageantry hit a high note when Camilla entered the runway to close the show. As the quintessential disco-era song, “I Feel Love” by Donna Summer played, models commanded the runway in flowy, bohemian dresses, rompers and kaftans. Haute Hippie also played on a ‘60s theme with billowy boho dresses showing that the summer of love still inspires today.

Night Three was the awe-inspiring Hair Show, the event that paved the way for DFW more than a decade ago. Each year, this night ups the ante with its brazen display of creativity and talent. This year, 18 teams comprised of Denver-based artists, visiting industry professionals and giants like L’Oreal, Redken and Tigi got together with local clothing designers to give us a taste of what the true drama surrounding the visionary world of fashion is all about.

WeSalon’s Kim Herman put together a vintage-inspired show that had a raw, undone quality. Bold lips and exaggerated, crimped beehives balanced polished attire. “I wanted to do something with ’50s and ’60s glam,” she explained. “Today’s world doesn’t seem to have as much time for glamour, so we brought that back for this show.” The end result was reminiscent of the 2005 W Magazine photo spread by Steven Klein featuring Brad Pitt and Angelina Jolie as a married couple in the 1950s—elegant perfection on the outside with dark, brooding secrets underneath.

TIGI absolutely stunned the crowd with a provocative display. Eric Gomez’s team used a technique that made each model’s hair look like dripping paint cut into geometric styles. In an equally bold move, Gomez dressed the models in barely-there outfits made of plastic straps and buckles. It was a show that only a true creative genius could imagine, much to the delight of those of us who sat slack-jawed in the audience.

Vanity Dollz hit us with another other-worldly series of designs, with a lineup that challenged normalcy with edge and sophistication. “Our inspiration was very McQueen-meets-Brooke Candy,” explained stylist, Paul Salas. “We wanted something fresh and fun, so we created this futuristic goddess.” Cha Cha Romero’s team created looks that included sculpted headpieces made out of glittery skull caps and light bulbs. It left us mystified, unable to comprehend what we just saw.

Each of Night Three’s two segments closed with an overarching theme, the first being “Chrystalline.” Artists from local salons each put three looks together, all in white, to show their interpretation of the theme. Artemis & Birch, added an extra layer of intrigue with hair sculptures that actually lit up as the models walked, while Goldie & Bob told a story through each of their models. “I made up this story about a girl from New York who is rebelling against her family, and this is her journey back to where she belongs,” said Liz Burns, owner of Goldie & Bob. “The crystals and textures of all of the upstyles reflect her beauty and struggle.” The theme “Obsidian” closed the show. Obsidian was the night to Chrystalline’s day with each of Denver’s best designers working with top local stylists to create a darkly hued theme. Hailey Hodapp & Rachel Marie Hurst paired lace and satin with heavy eye makeup that whereas Bri Bird & Tyne Hall when lighter, rimming their models faces with white. Hannah Werling & Duane Topping went fresh-faced with dark texture leather dresses whereas Stephan Lauren & Kotomi Yoshida brought out some avant-garde menswear that resembled an arachnid. For the last walk, hairstylist Alicia McQuilliams teamed up with fashion designer Maggie Burns of Marie-Margot. Models wore custom, onyx-hued gowns and veils of jet black hair that obscured their vision and blinded us with awe.

If you’re wowed by what we just described, just wait. Come next spring we are happy to announce that we will expand Denver Fashion Weekend into a full week of fashion. Featuring more runways, industry events and workshops you won’t want to miss Denver Fashion Week, March 18-25. 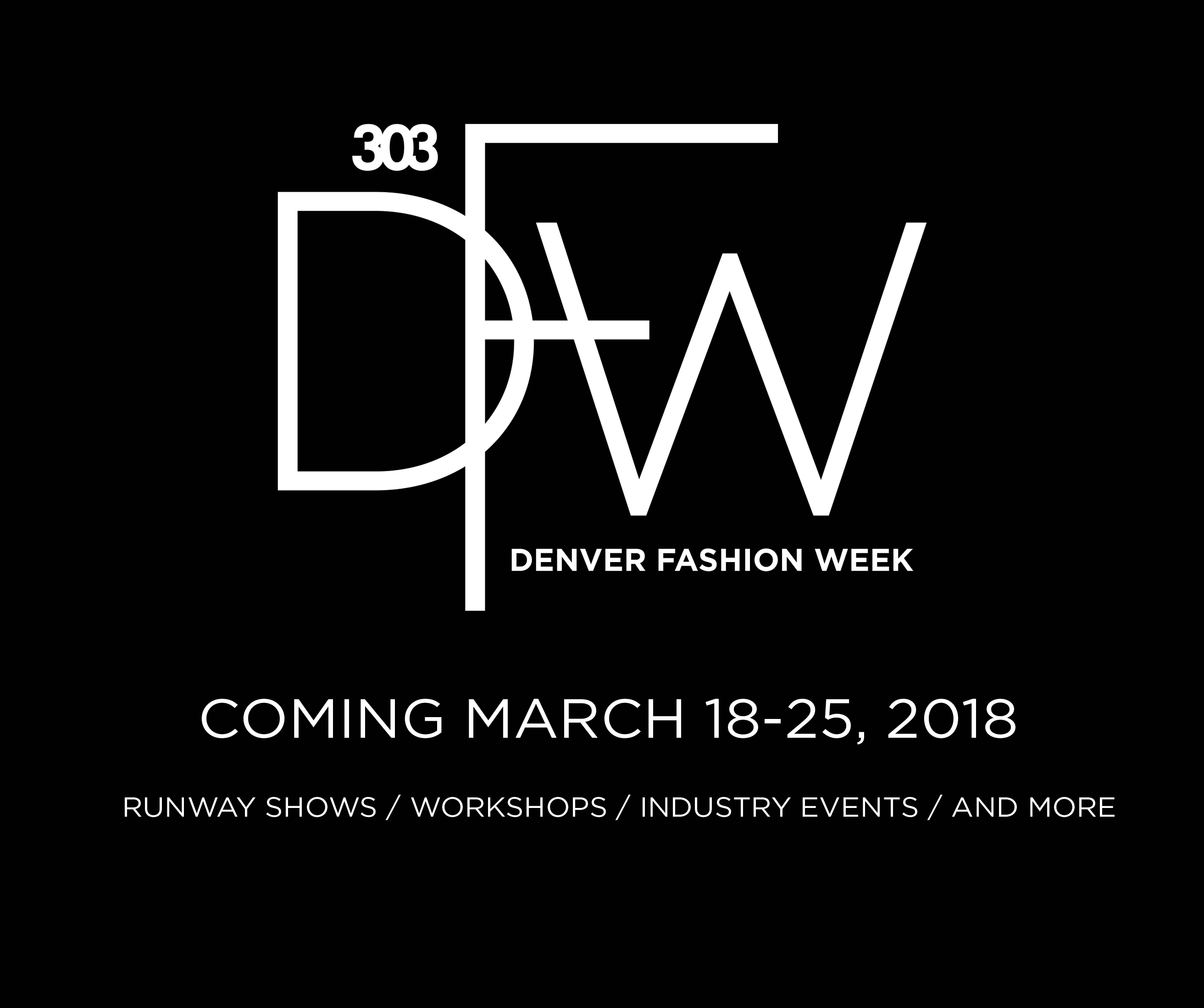