Molly’s Game is, at its core, a female empowerment story. The heroine is an unlikely one— an almost Olympic athlete turned high stakes poker baroness— and the story is true. Based on the life of a Colorado woman (born in Loveland) named Molly Bloom, who appeared at the sold-out screening of the film on November 9 at the Denver Film Festival (DFF), the film is an ode to her intellect more than anything else. According to her brother Jeremy Bloom— former Olympic skier and NFL athlete who was also in attendance on Thursday night— it was important to his sister that the film find its way to Denver, to their home state. The screening was also a benefit for the Wish of a Lifetime foundation — a Colorado non-profit.

First-time director, but a long-time screenwriter and producer in the film industry, Aaron Sorkin, displayed his prowess at finding and framing a story worth putting on the big screen. His writing has brought movie and TV lovers shows like The West Wing and The Newsroom, and films like Moneyball, The Social Network and Charlie Wilson’s War. Accordingly so, the Denver Film Festival presented him with a Career Achievement Award after the screening of Molly’s Game.

“This film is worth all the awards buzz that it’s garnering,” Britta Erickson said at the award hand-off, “with his fingerprints all over the some of the best-perceived films and TV shows in recent times, his work on Molly’s Game is poised as a new standard for Aaron as a director.” Sorkin then sat down with Jeremy Bloom for a question and answer session about the film and about the real Molly and her portrayal. 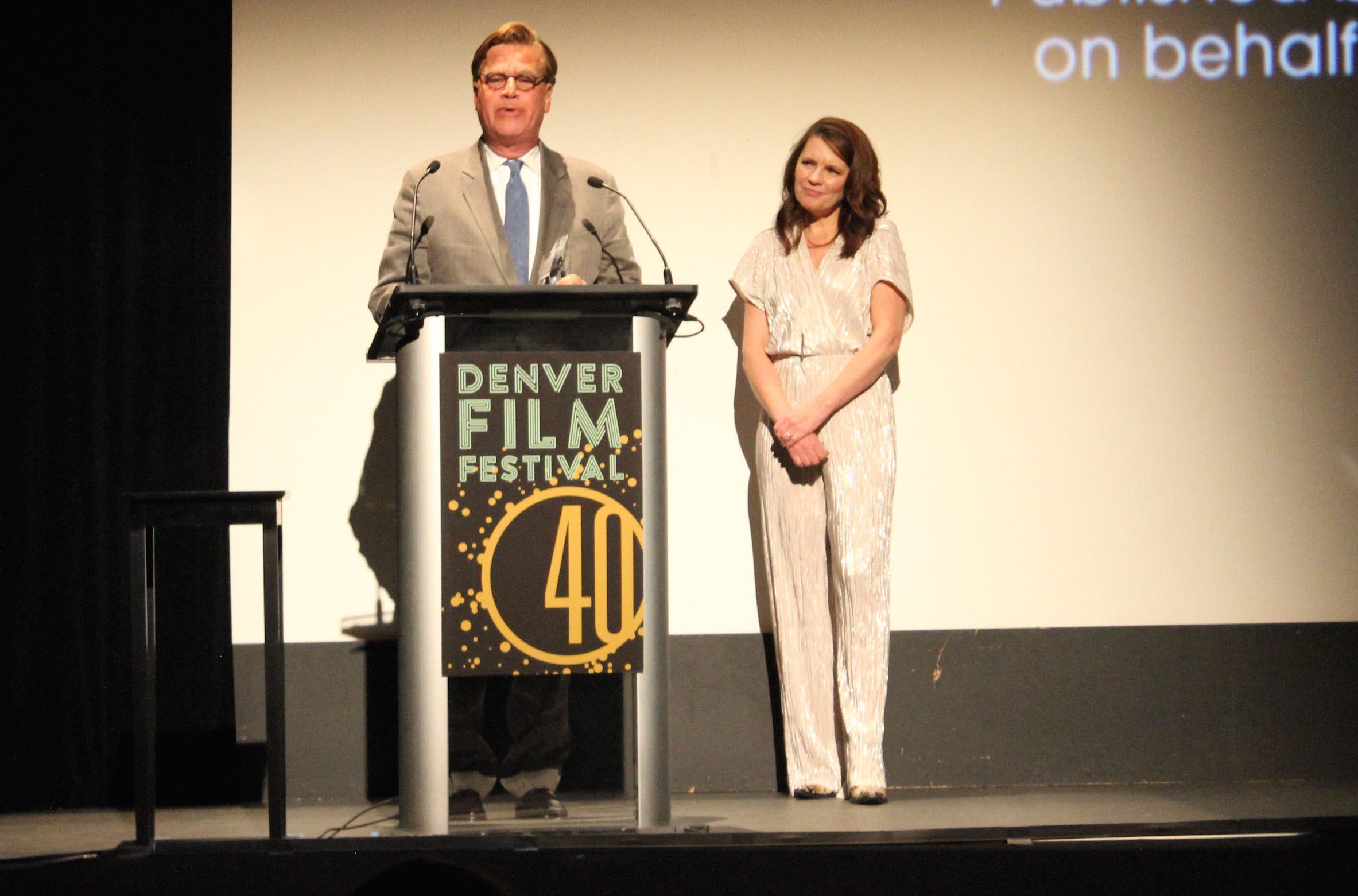 Jeremy made sure to immediately make a joke about the altitude in Denver to Sorkin, but then easily transferred into a serious role, where he asked why Sorkin was so captured by Molly’s story.

Aaron Sorkin: An entertainment lawyer sent me a book and said will you read this book and meet with my client, Molly Bloom. I said sure, read the wild-ride of a book, and went to meet Molly. I went to the meeting with no intention that it would be a movie I would write, but after that first hour-long meeting… I realized that I wasn’t just meeting any other person. She had a sly sense of humor, but the most serious thing was she’s made out of integrity and character. She had told a good story that left breadcrumbs to a great story.

Jeremy then asked about how the decision to cast Molly with Jessica Chastain came about, amid a lot of other options for actresses.

AS: I wanted to see if this actress [Chastain] who’s been directed by the greatest directors we have, if she would be willing to take direction from someone who doesn’t know much about directing, or if I would be taking direction from her. After just a short while in the meeting she said, ‘you know, you should just give me the part.’ And I said after a pause, ‘yeah, you’re right.’ After all the other meetings and hours with her, Jessica mentioned that saying that to me in the first meeting was because she thought it was something Molly would have said. 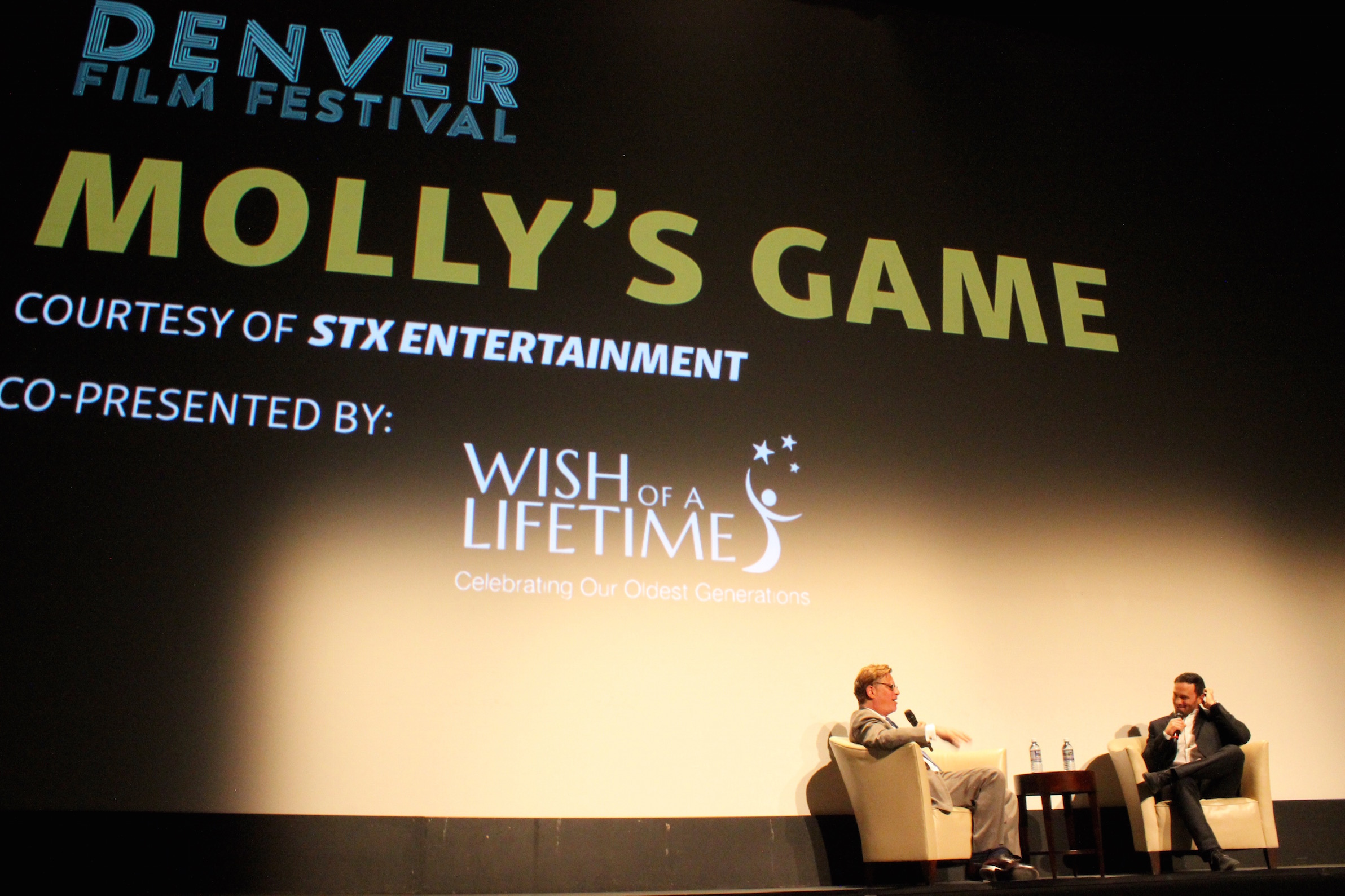 The film splits the narrative between the “present day” when Bloom is arrested and has 48 hours to find a lawyer after the government seizes her money, and 12 years prior when Bloom was trying to qualify for the Salt Lake City Olympics but suffers a debilitating crash. Bloom is portrayed by the magnificent Chastain through fast-paced, witty monologues and on-the-nose comebacks amidst a cast of decently famous men (Michael Cera, Kevin Costner, Chris O’Dowd,) all of whom she outshines, except maybe her defense attorney played by Idris Elba. Those two together make some truly intellectually explosive scenes.

It’s part caper-film, like Ocean’s Eleven, and part personal drama, like Erin Brockovitch, and it’s more fascinating than both because it’s not dramatized. There isn’t outrageous violence, there isn’t an unnecessary sex scene— it’s all about Molly making decisions and owning them.

Toward the end of the film, during a flashback to her skiing crash, the announcers at the qualifying race comment that “she’s the older sister of the skier Jeremy Bloom.” But after this film, after the electrifying way Molly controls some of the most wealthy and powerful men in L.A and New York with her brains, it is more likely that people will see the former NFL and Olympiad as her little brother (and Jeremy admitted that himself.)