On Women’s Equality Day — August 26 — you’ll see the fight for women’s rights literally taken to the streets. For the fifth time, the GoTopless day parade will run through Denver, encouraging people to celebrate topless equality.

To help us learn more about the parade and its importance, we spoke to its co-chairs, Mia Jean and Matt Wilson. Jean, who got involved with the Go Topless movement after watching the movement “Free The Nipple” a few years back, explained that the purpose of the parade is to reduce sexualization and objectification of women by normalizing toplessness. “We reject the idea of unjust double standards. We want to change the view that breasts are innately sexual and will cause uncontrollable arousal if exposed in public,” she said. “We refuse to fuel the idea that men are not capable of controlling themselves in the presences of a female, no matter her state of dress. We point to studies and other societies that embrace nudity in their culture, and how they have lower instances of sexual violence and crimes against women.”

Wilson had a similar sentiment, and explained that it’s important to distinguish the difference between nudity and sexuality. “Just because they can overlap doesn’t mean they’re the same thing. Yet in our culture, 99 percent of nudity is portrayed in a sexual context, and such portrayals almost always use idealized imagery — beautiful models, best lighting, flattering camera angles, photoshopped flaws, etc.,” he said. “The millions of idealized and sexualized images we see in our lifetimes condition us to respond to (and define) any nudity as sexual — regardless of context, and to judge appearances based on an unrealistic ideal.” Wilson went on to explain that this condition leads to “harassment, rape culture, body image issues, eating disorders, sexual dysfunction, relationship issues and so on.” 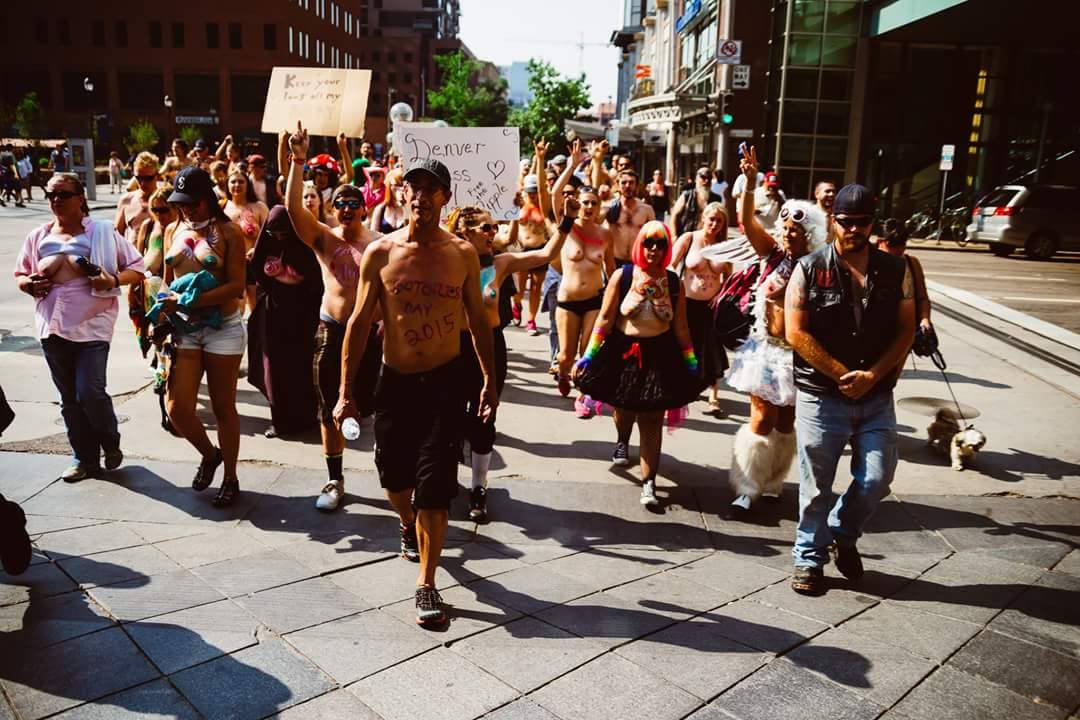 While the parade and topless equality may not be the solution to all issues of sexism and gender oppression, Wilson and Jean feel confident that it’s a good place to start. “This is a culture war with multiple fronts, including improved sex ed in schools, anti-harassment guidelines in the workplace, pressuring television and magazines to promote healthier images of women and relationships, and more,” Wilson said. Jean said, similarly, “We want to change the perception, and this is just one way of attacking the problem. All of us involved in this cause, and other causes of equality, know this is our day to be out, band together, and make a ripple.”

Wilson also noted that this parade is important for all people, not just women. “America needs to be exposed to non-sexual nudity to be reminded that context matters. To be reminded that the body is just a body  — the person inside is what matters. We need to break out of the box which we’ve allowed ourselves to be penned,” he said. “It’s also an opportunity to prove that not all men are slaves to conditioning and primal instincts, a stereotype that hurts men just as much as women. Bad apples tend to get the most recognition, but they don’t represent the majority.”

If you couldn’t gather it from Wilson’s statement above, the Go Topless parade is welcome to everyone, especially those “frustrated by any … double-standards perpetuated by modern society, and anyone who’s up for an adventurous foray into social activism.” Just be aware of the space you’re occupying (and why) when you’re there. “As far as acting appropriately at the event, its really common sense. Respect personal space. Ask permission to take photos,” Jean said. “Understand that different people have different comfort levels, and that’s okay.” Also, if you’ve got any concerns of safety or confrontation, there’s no need to worry — there have been zero cases of violence, groping, inappropriate behavior or anything of the like in the parade’s history. So rip off that stuffy shirt (or don’t) — and take a stroll in the name of equality.

“In the end, this is about how people treat people. Ninety-nine percent of the problems in this world are caused by people treating each other like crap, and those in power who capitalize on it,” said Wilson. “This is a chance to promote positive change. You don’t have to be topless to support topless equality — wear pasties, body paint, a bikini or go topless. It’s all about having the freedom to choose, and being treated with respect no matter how much (or little) you’re wearing.”

The event starts at 11 a.m. on Saturday, August 26 at Civic Center Park.