There’s nothing quite like a dirty disco — the kind of blistering filthy funk that throbs through your veins and makes you sweat through your favorite T-shirt while you get down with the best of them. As I made my way into Globe Hall Saturday night, through clouds of smoke and a couple spilled drinks into the dive bar’s underbelly for !!!’s (Chk Chk Chk) performance, I knew it was about to go down. For a band that’s been around as long as !!!, they had attracted an array of fans — some recounting performances stretching back upwards of 10 years prior to the show and others about to witness the band for the very first time. No matter where you placed on the spectrum, one thing was for sure, the energy in Globe Hall was palpable. 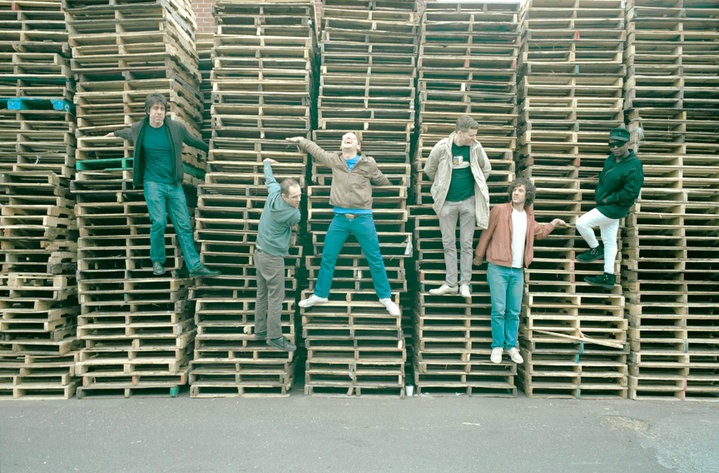 Walking out on stage, !!! didn’t give off the impression of being the dance floor savants that they’ve built their career around. However, the moment the drums gave way to their signature sinewy bass lines and lead singer Nic Offer locked eyes with the crowd, the room erupted into a sea of gyrating bodies chained to the rhythm. Joined by a female vocalist, Offer with Angus Young-esque blazer and matching shorts burned through the sleazy opener “Dancing Is The Best Revenge,” transforming Globe Hall into a sweaty New York club in the process. !!! came with one purpose, and that was to make us dance harder than we ever had before. For as hard as the audience was dancing, Offer was committed to dancing harder — bounding from speaker to speaker thrusting his hips with a vengeance, pushing us to do the same.

Much of the set revolved around the electronic funk of their crisp seventh album, Shake the Shudder, which saw the band fully embracing their house music influence at the loss of some of their more indie punk tendencies. Yet, as Offer performed his punk grit would seep in as he growled over the frantic grooves. In performing their 2004 fan-favorite “Pardon My Freedom,” they went punk full stop and the effect was mental. Perhaps it had something to do with the current political climate, but the sound of Offer screaming, “You can tell the president to suck my fucking dick” over the erratic production sent the place into hysterics. Looking around the room there wasn’t a still body in sight.

What was most incredible however, was the sheer stamina of !!!.  Upon starting the show on such a furious note, they never fizzled out. As long as our bodies could keep up, !!! would deliver. In fact, one could argue that !!! doesn’t believe in slow songs at all. By the time the band reached the penultimate “One Girl/One Boy,” it felt like we’d unwittingly signed up for a dance-a-thon. Yet, just as the band showed no signs of slowing down, neither did the audience. !!! held us in their grasp and neither of us wanted to let up. It is a testament to the band’s efficacy and the reason so many people speak fondly of seeing them live. It was filthy, it was raw, it was disco at its finest.