They don’t make ‘em like Jean-Michel Jarre anymore. The electronic pioneer, a forefather of modern EDM and technology aficionado consummated the marriage between a digital world and reality in his performance at the 1STBANK Center on May 24. In the same reality bending context as boundary-pushing electronic performers like Flying Lotus, Björk and The Chemical Brothers, Jarre masterfully crafted every moment from his intimidatingly busy rig, conjuring magic from the music and creating a fantasia of performance where light and sound collide. Known for having performed one of largest concerts of all time at a ludicrous 2.5 million people, rather than downsizing his performance, Jarre went full-stop for the mere hundreds that awaited him at the 1STBANK Center for his first ever US tour. 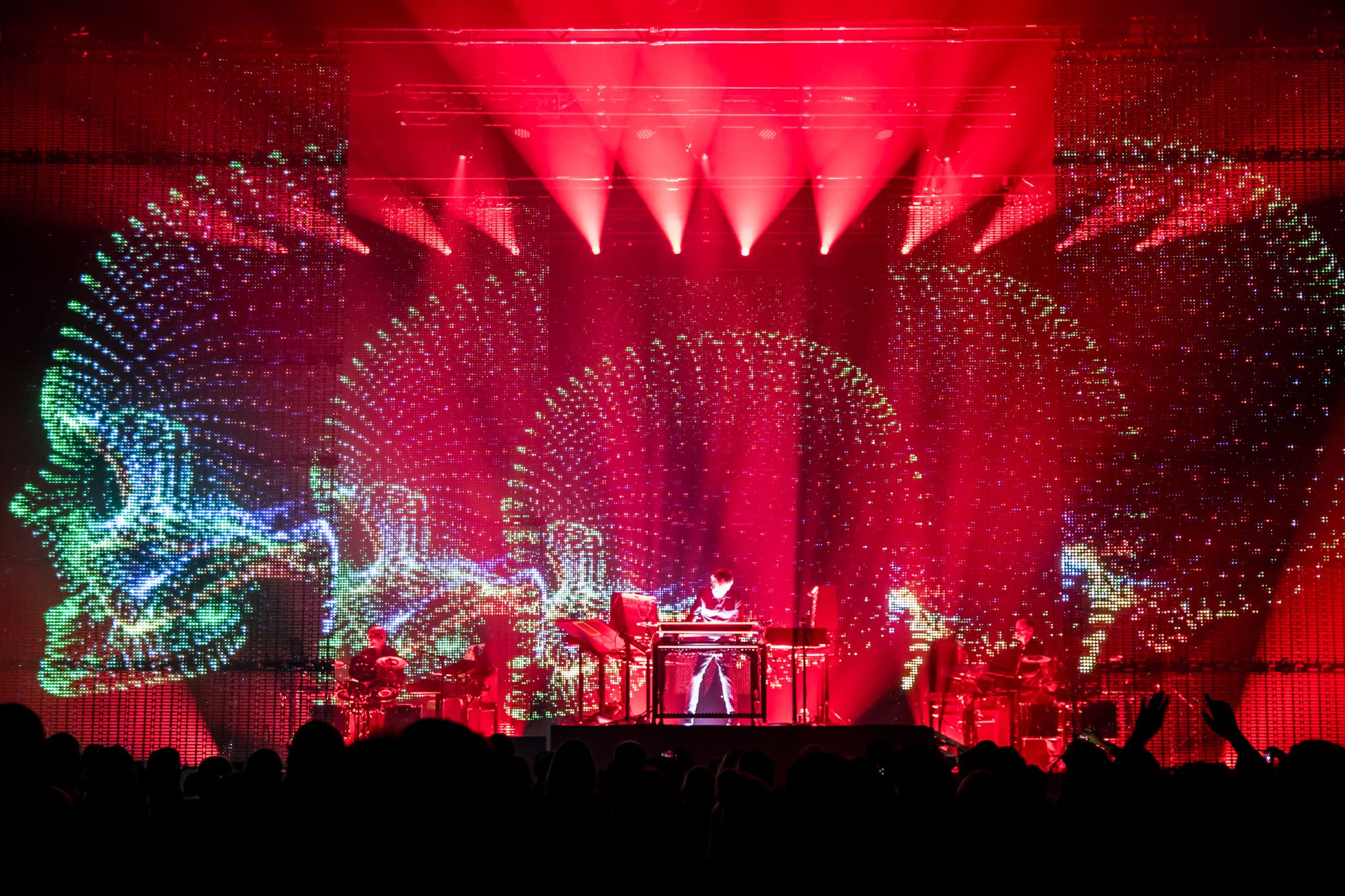 Sauntering on the stage behind massive all encompassing LED panels, Jarre and his band were met with a thundering ovation. Having begun his career in the ’70s, there were people in the audience who undoubtedly waited decades to see the French composer in action. Others, swept into electronic music’s recent boom in US, stood anxiously before a legend. The generational span of ages in the audience was like nothing I’d seen before, and the magnetism Jarre commanded was validated with each clap as he launched into “Heart of Noise.” There was never any warning for the spectacle that unfolded before us. 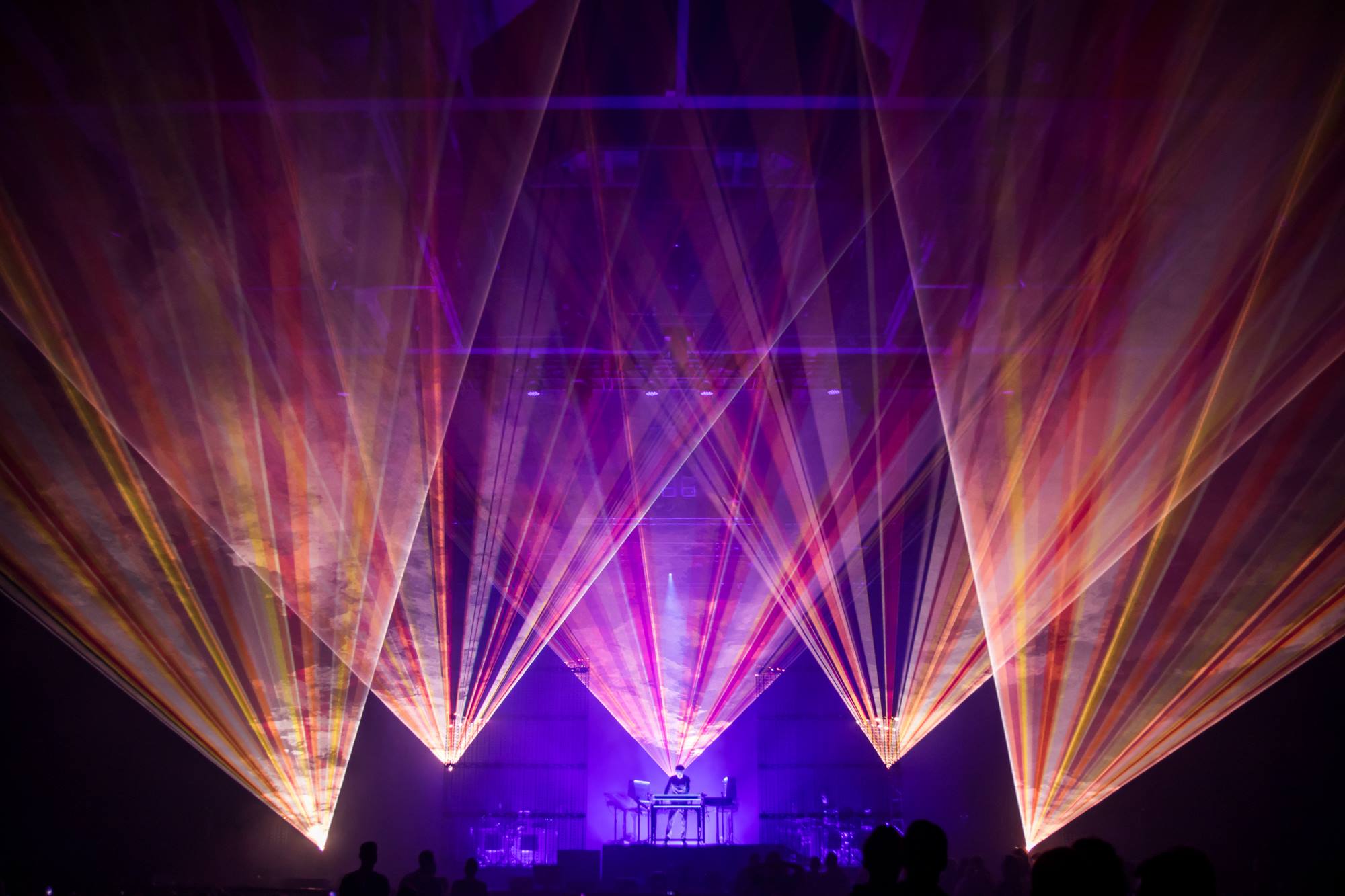 The LED panels, both in front and behind the band, parted way projecting a digital landscape that enveloped the room in a matrix of futuristic aesthetic. Jarre himself appeared suspended between the fantastical illusions darting around his rig like a mad scientist on the verge of a breakthrough. For parts of the performance, Jarre — equipped with a GoPro and a camera attached to his glasses — would project his work in real time, making the distinction that every bit of magic he made was indeed real. He blazed through a career spanning set list heavy on his collaborative projects Electronica 1 and Electronica 2, as well as his quintessential Oxygene Trilogy. Manic guitar solos book ended “Conquistador” and digital people marched to the call of “Brick of England” as computerized versions of the Pet Shop Boys beckoned over percolating synths. Even a prerecorded message from embattled whistleblower Edward Snowden was broadcast, emphasizing the importance of privacy and our duty to fight for it. I was mesmerized as kaleidoscopic skulls rotated around the band in a flurry of pixels to “Oxygene, Pt. 17” and was overcome by the typhoon of technicolor euphoria that came with it. Had there been any semblance of reality left, neon green lasers obliterated the room as Jarre, looking more like a sith lord than a musician, played a show-stopping laser harp with his bare hands, rendering me completely disoriented and shell shocked at the same time.

To put it simply, Jarre’s performance was a visual and sonic triumph — a culmination of a lifetime worth of progress uniting man and machine in art. Many times in the realm of electronic music there’s an imbalance in the expectations of such an unholy union, but as Jarre beautifully illustrated, when the focus is placed on highlighting the strengths of both, and the visceral experience it creates, true magic is born. There’s a possibility I may never experience a performance of that caliber again, but should Jarre find himself returning to the states, I’ll be welcoming him back with an ovation of my own.