This year, the Art Directors Club of Denver showcased its 13th annual Paper Fashion Show at the Seawell Grand Ballroom on Thursday. The fashion show is worked on by over 40 design teams to bring out over 30 creations all made of paper. Teams will have spent months on one garment that it sent down the runway to compete for first place. In order to even be qualified for a prize, the garments must be made of 90 percent paper. A panel of judges — including Brandi Shigley of Fashion Denver — was among the group.

The Paper Fashion Show not only celebrates creativity, but a portion of the proceeds went to benefit the Downtown Aurora Visual Arts center, a place for underprivileged children to go and express their creativity. This year’s runway competition brought out some stunning pieces that could have been mistaken for an haute couture gown alongside wacky, avant-garde gowns and costumes. 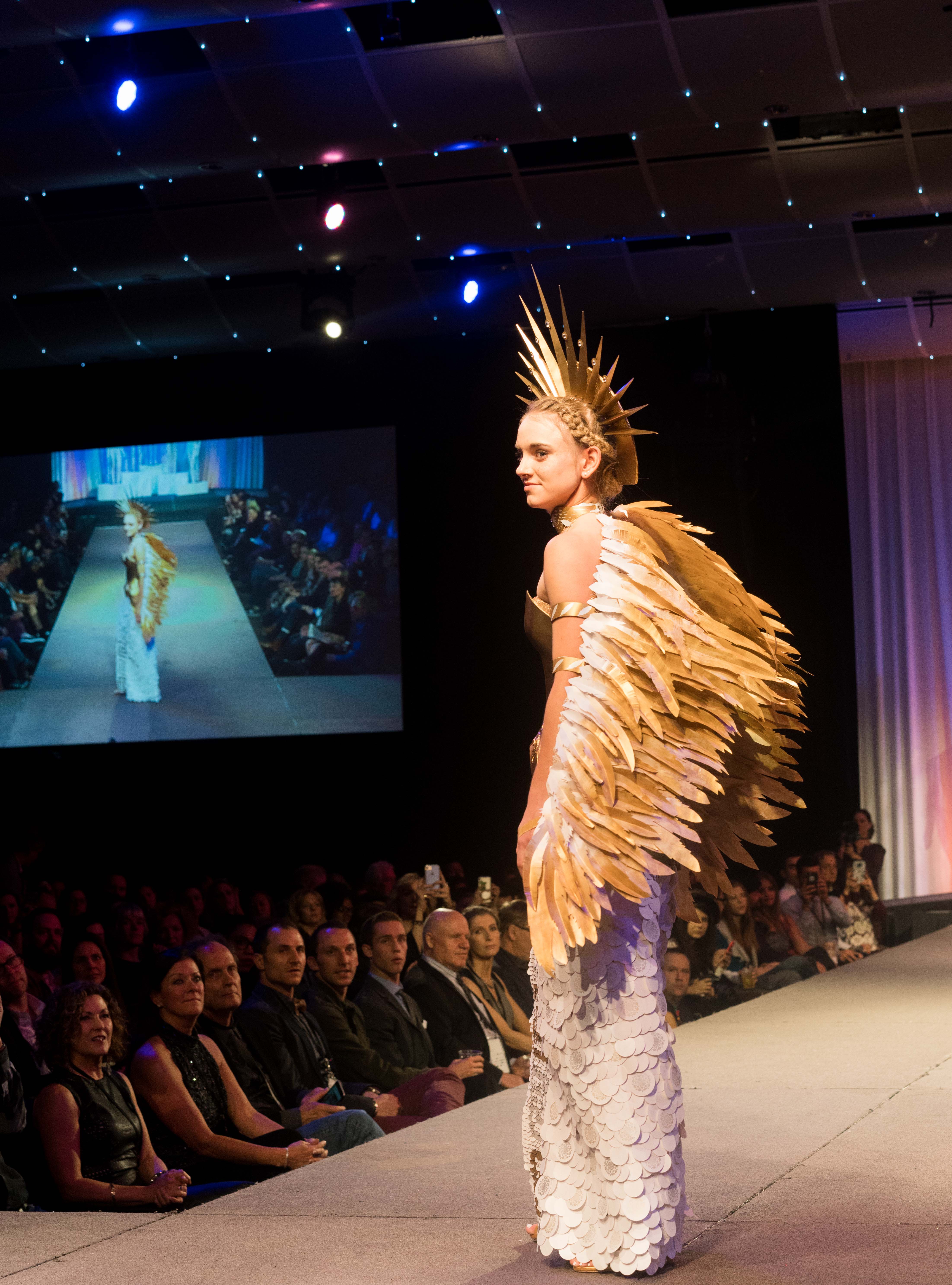 The Guardian by The Hanger ETC 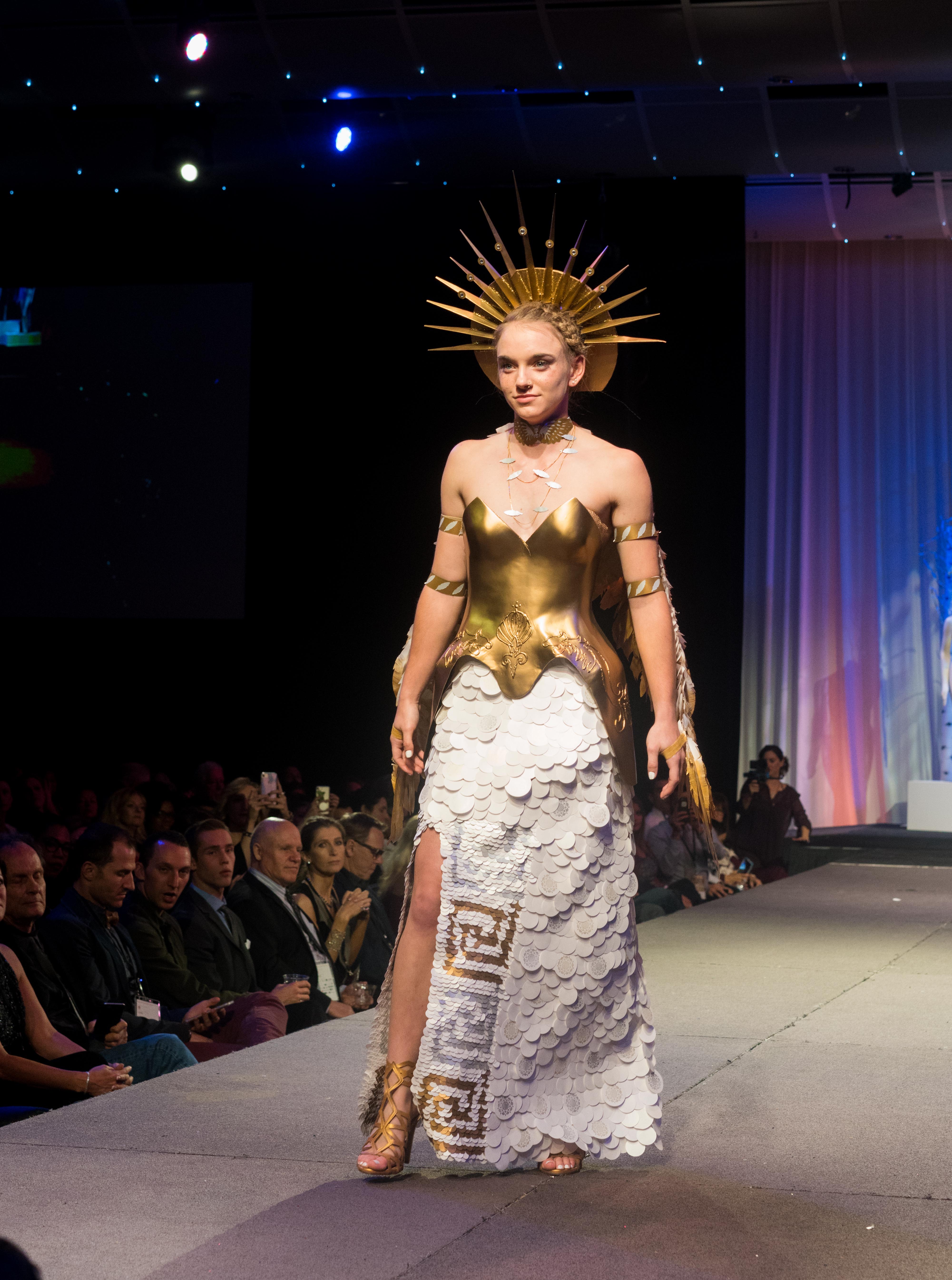 All images by Meg O’Neill

This year’s Paper Fashion Show seemed to bring up many themes that designers found concurrent or interesting. One big image we saw a lot on the runway were wings. The Guardian by The Hanger ETC, was inspired by the texture of feathers and the idea of flight. They wanted a way to fuse these ideas with fashion, and as a result created two garments to showcase.

Two other pieces which featured wings found inspiration in the fantastic. A colorful creation by Hofmeister titled Papyrus 2.0 looked at ancient Egyptian gods and goddesses. Metallic papers were used to achieve the illusion of bronze helmets and weapons. The group also utilized iridescent papers to give some shine and a mystic feel to the overall look. Project 10/21 by The Rios Family used a butterfly as their inspiration. Much like the Egyptian ensemble, metallic papers were used to make the model look like she was in silversmith’s gear and ready for battle. The butterfly wings used sheer, glossy paper to mimic the shine of wings and did very well against the runway lights. 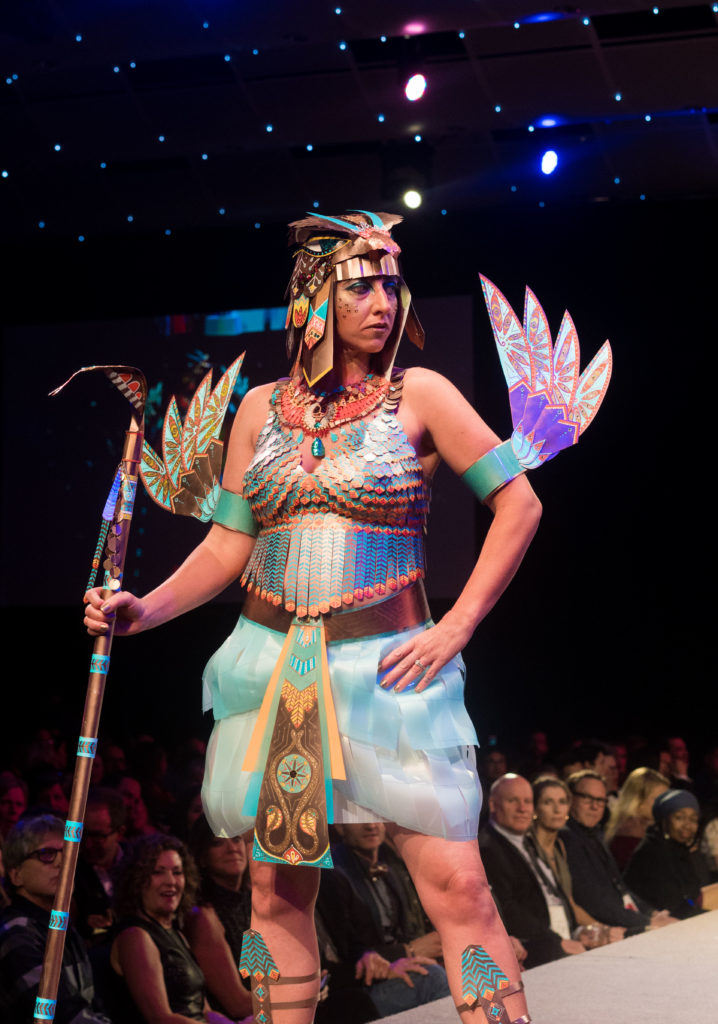 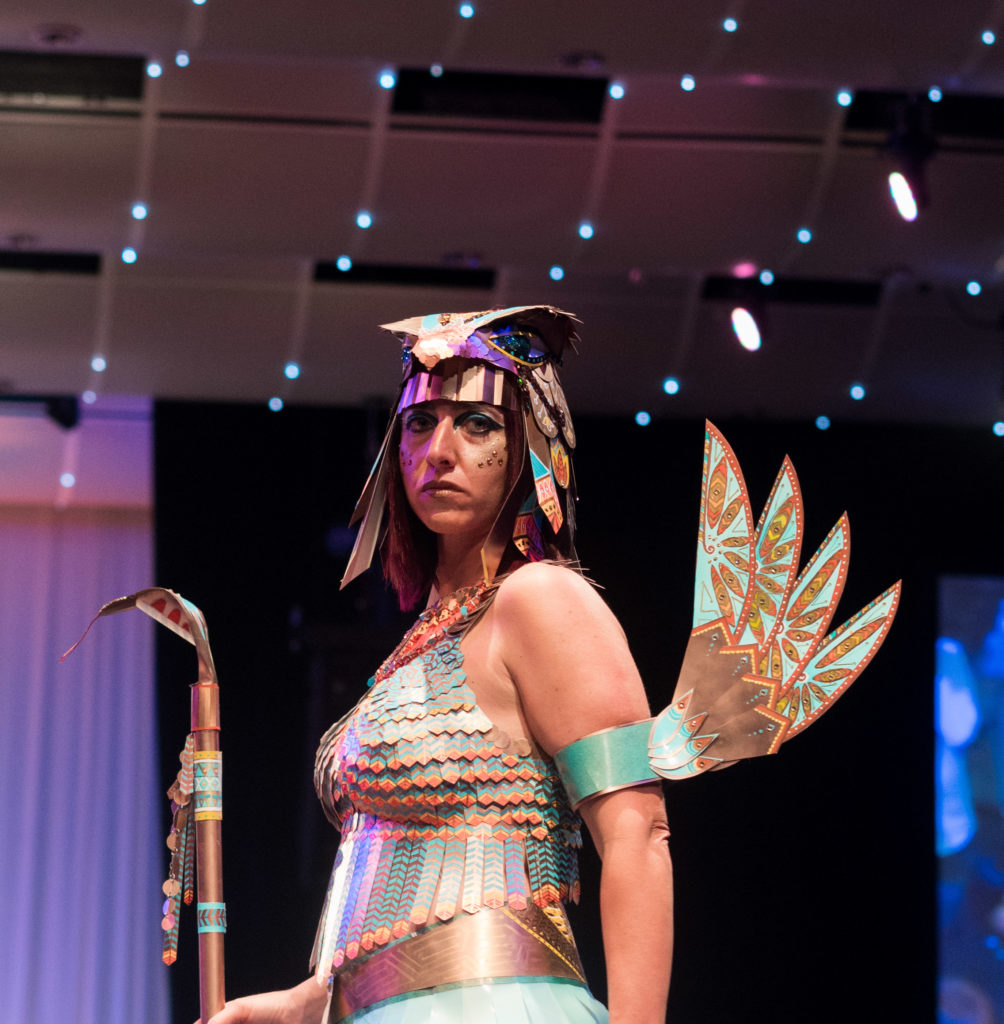 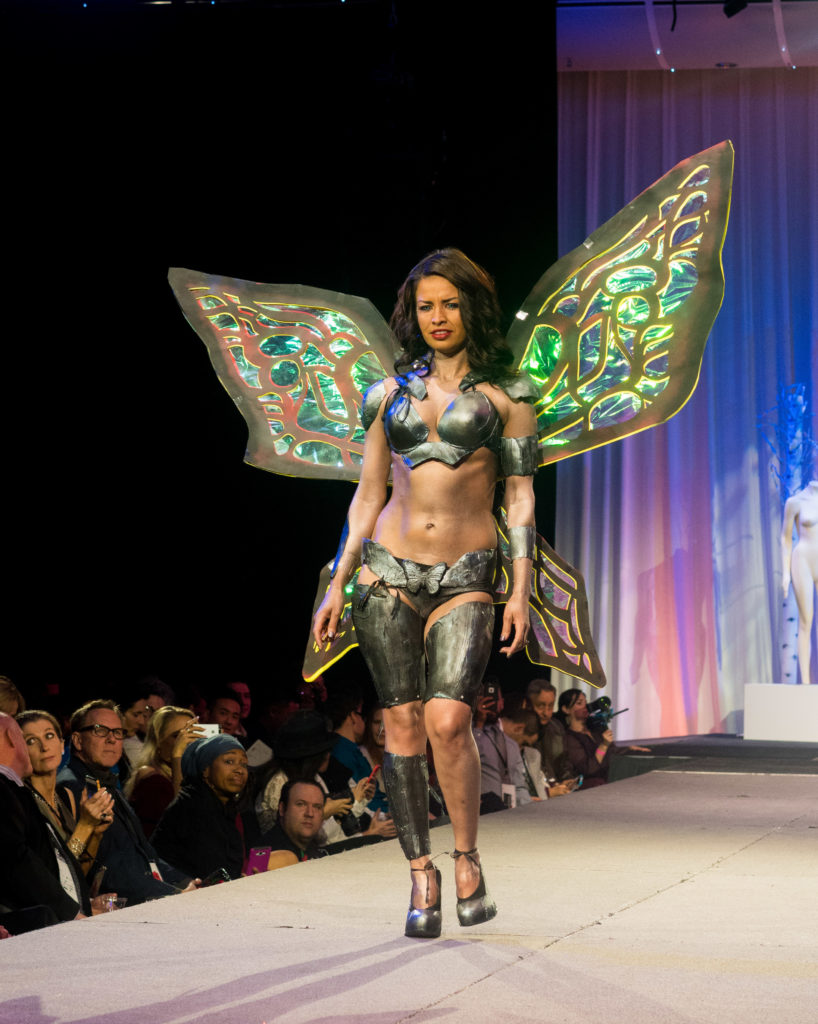 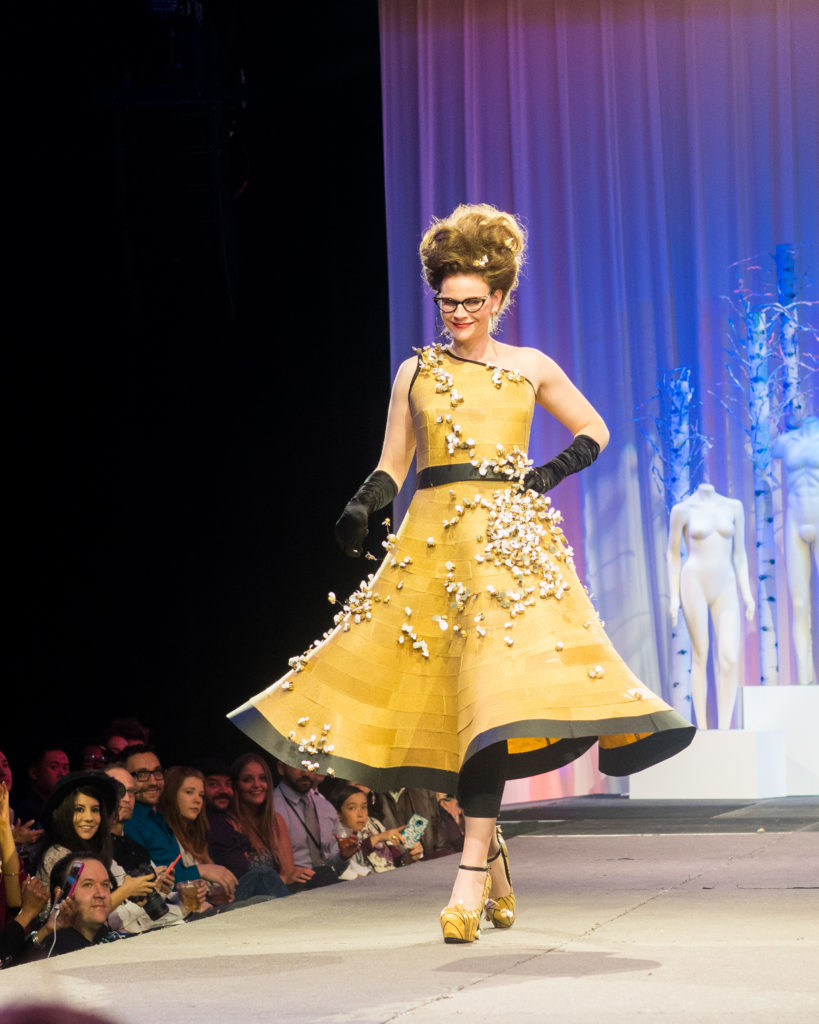 Nature served as another large theme though out the Paper Fashion Show. A look by the Chatfield Group titled Dripping Honey featured a yellow, A-line gown which took inspiration from bee hives. The swirling pattern of the paper gave way to motion and created a whimsical feel. A beehive hairdo was the perfect choice alongside ’50s style accessories such as the cat eye sunglasses and long gloves. Small little paper bees helped complete the look by adding some white texture to the costume.

Mother Nature by Chaparral Fashion Club found inspiration in both nature and myth. Together they constructed a tree-like feature for the top of their garment with flowing flowers acting as a skirt for the bottom. However, the crowd seemed to be most impressed with the large headdress which looked extremely realistic. Take Flight by Conquer Origami used colorful imagery and an ombre effect to keep their piece interesting. Hundreds of butterflies were created using origami to create a flowing skirt. The model held an open cage as well, to show the freedom of nature. 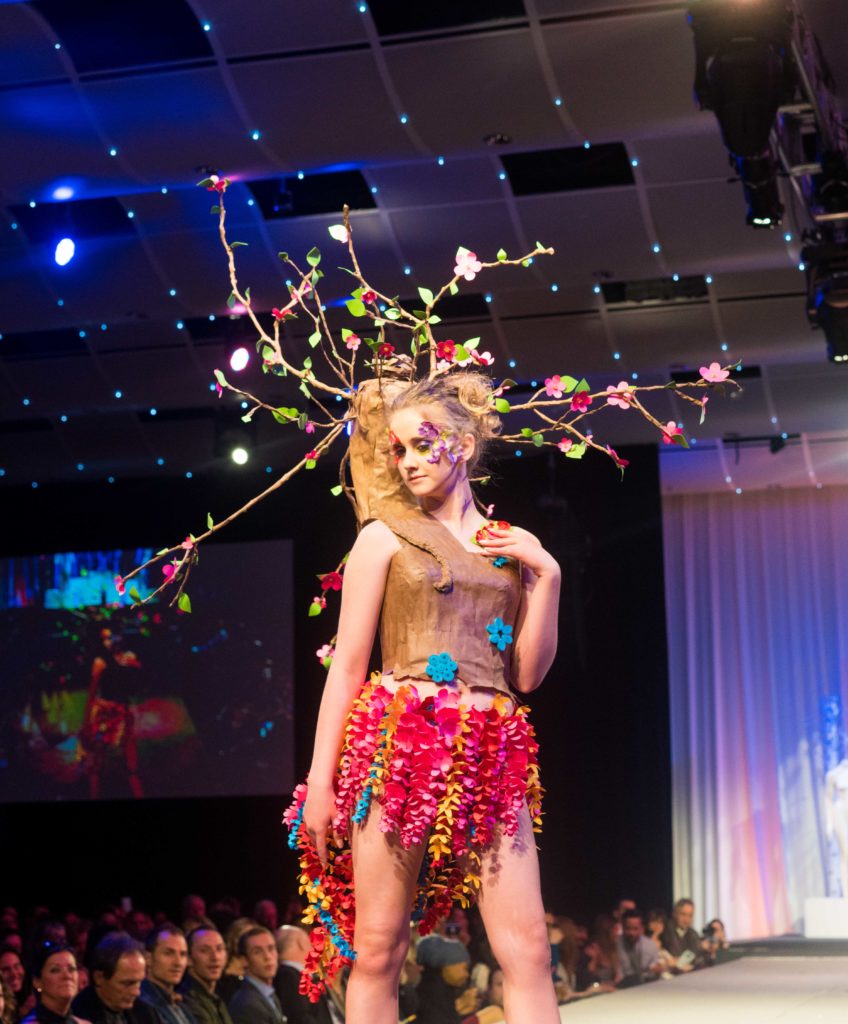 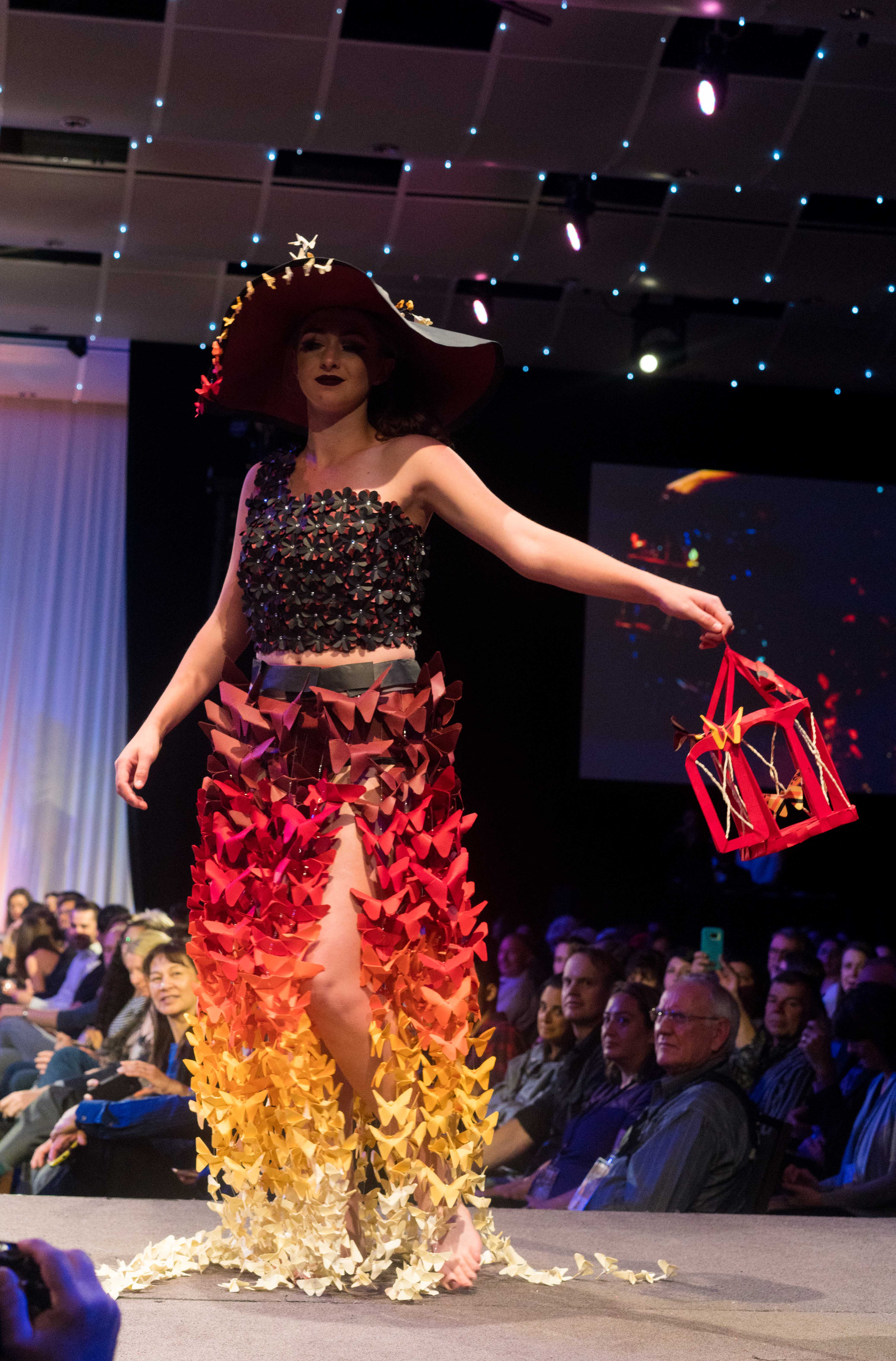 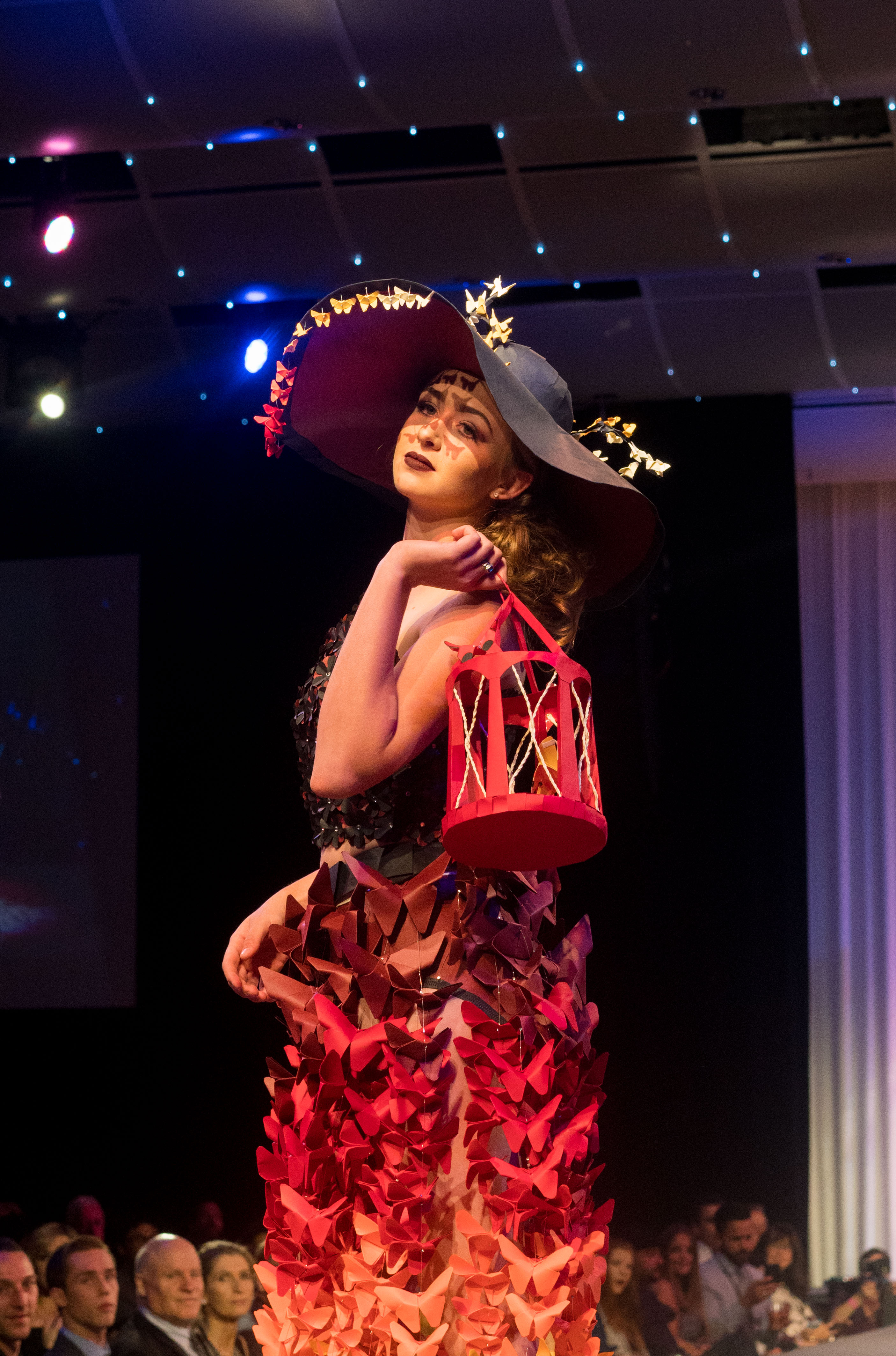 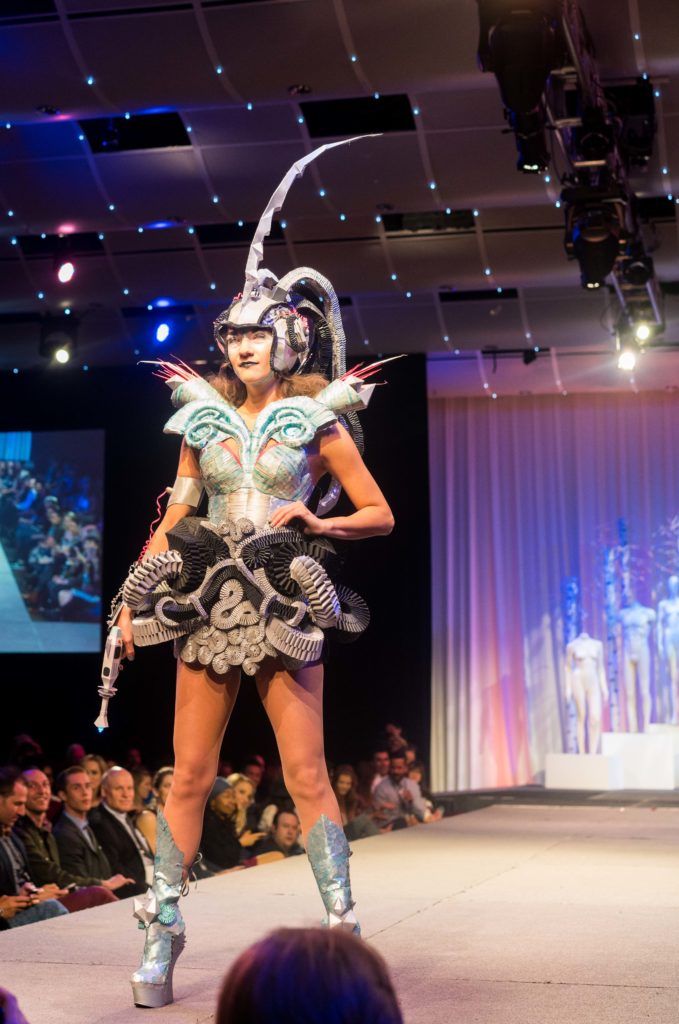 Space served as another large theme for the night which brought out a few of the wackier creations. Futuristic Alien Robot by Factor 231 ended up in second place overall. The look featured many details the judges seemed to marvel over. Coiled like ribbons were used for the skirt of the costume giving both texture and volume to the look. A metallic headdress defied gravity and worked well with the pointy details of the shoulder pads. Lady Gaga like shoes helped complete the look as well as the models mint green contact lenses. Falling Star by Chaparral Fashion Club went all out this year by constructing a golden solar system around the model. The black paper skirt showed constellations around the solar system. A red top helped the model stand out from the busy metallic solar system. 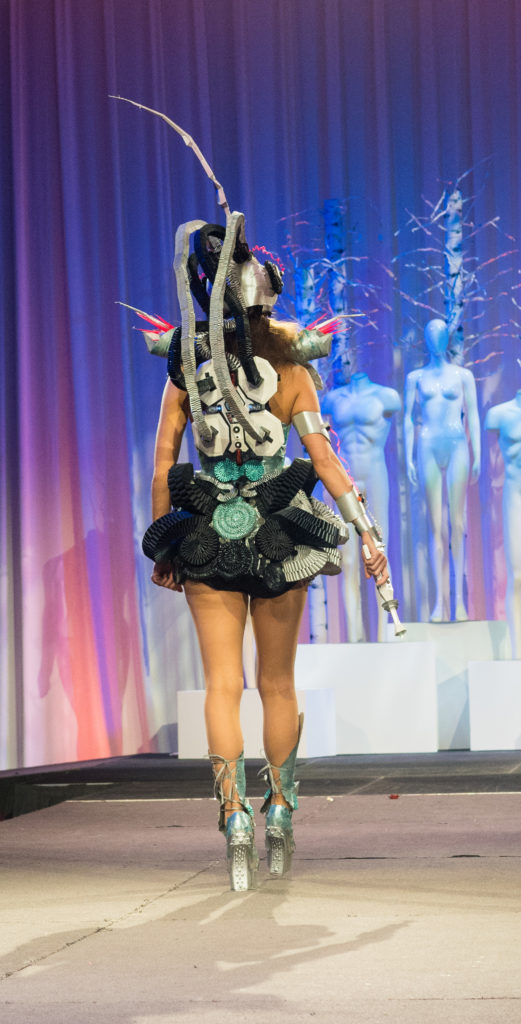 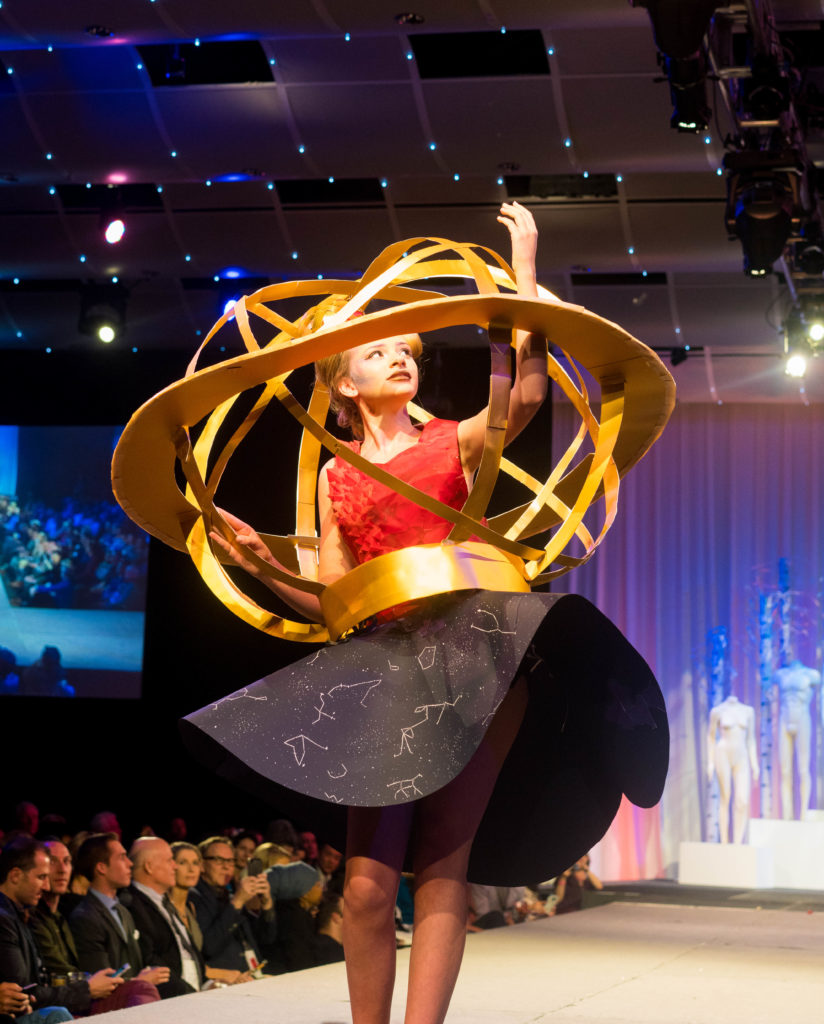 Center of the Universe by Chestnut Brown Creative

Welcome to the Tea Party 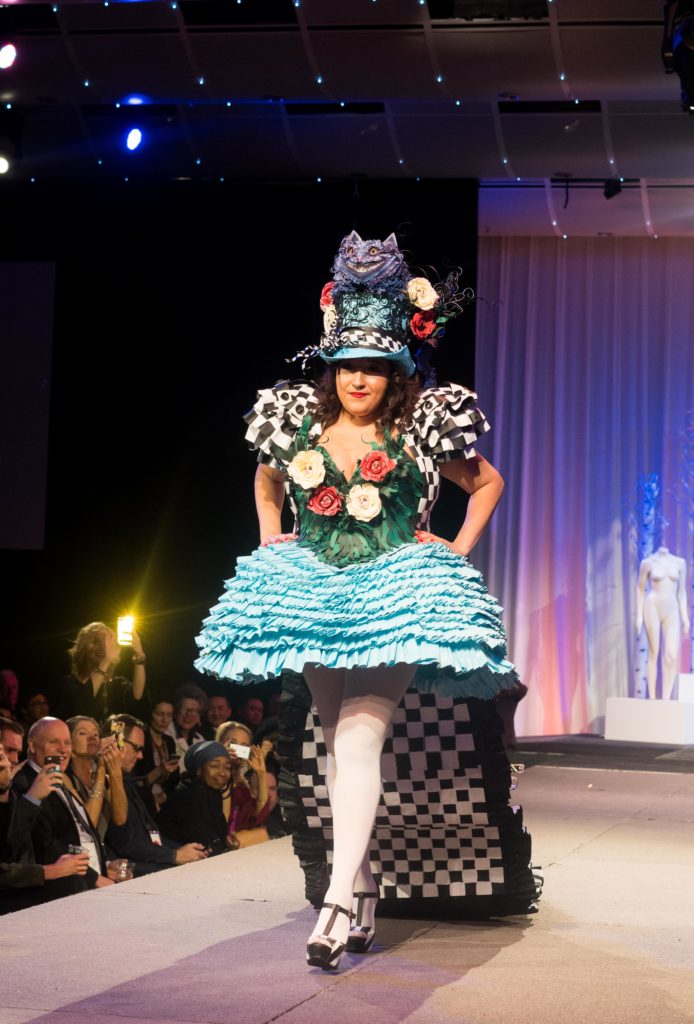 Welcome to the Tea Party by Slynn

A costume titled Welcome to the Tea Party by Slynn ended up as the winning look for the 13th annual ADCD Paper Fashion Show. Inspired by Alice in Wonderland, this piece wowed the audience and judges alike. The amount of details put into the costume were apparent in both the front and the back. A stack of teacups, a teapot, as well as a life-sized rabbit sat on the train of the piece in pure Alice in Wonderland style. The blue frills on the skirt of the costume added texture that seemed fabric like and worked well with the black and white checkerboard shoulder detail. A Cheshire cat peeped out from the models top hat alongside flowing flowers that would have been found in the queen’s garden. 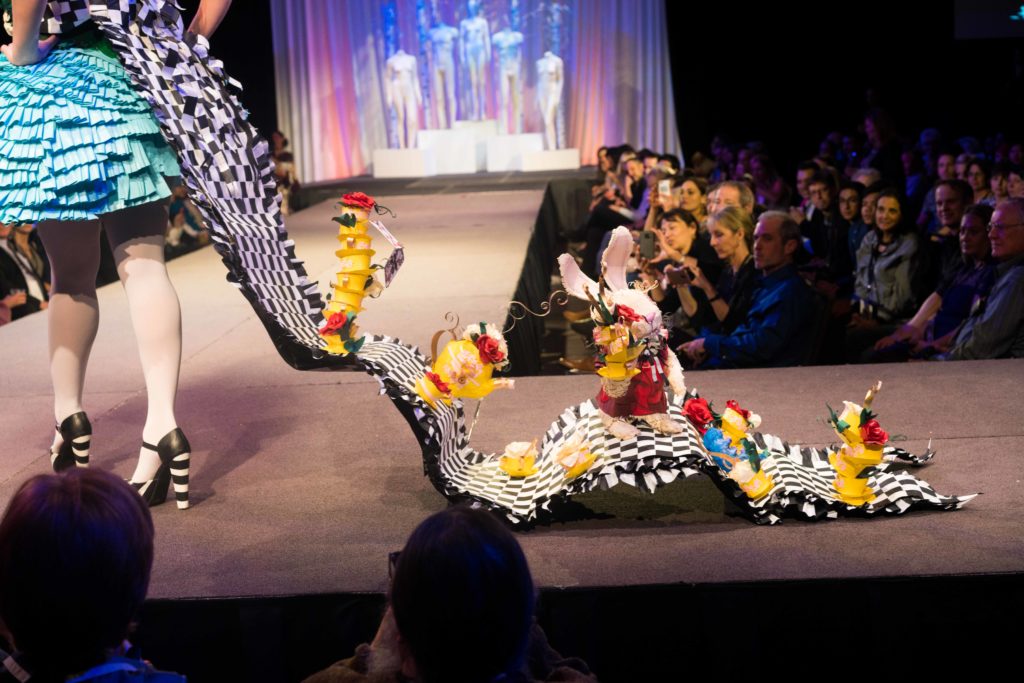 All images by Meg O’Neill