What the Hell Happened to the Die Antwoord Red Rocks Show?

We’re just as confused as you are.

This past Tuesday, Die Antwoord announced their Red Rocks debut. However, as many fans have noticed, nearly all online information on the announcement has since been removed. It’s an anxious moment for Red Rocks goers since tickets were announced to go on sale at 10 a.m. this morning and 2017 shows have been selling out fast. But the ticket link is gone. Information has been removed from AXS and Bandsintown, and Die Antwoord fans are in the dark awaiting more information. 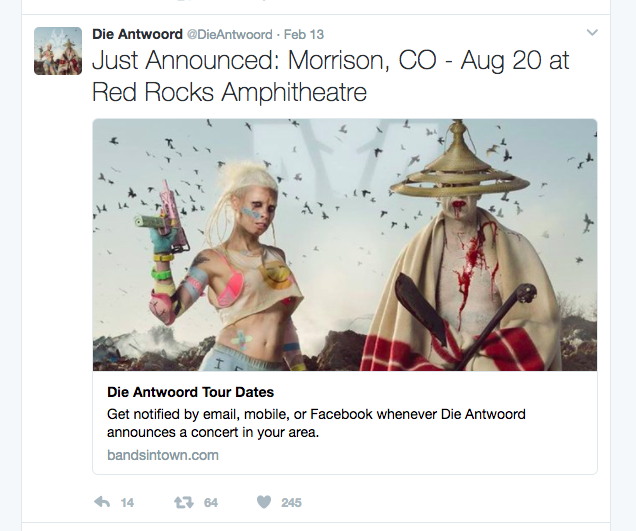 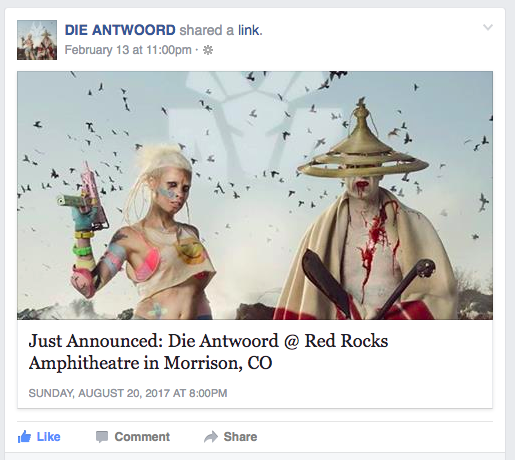 Nonetheless, the announcement information has left a paper trail. The Red Rocks show is still live on Die Antwoord’s Facebook and Twitter, and if you Google “Die Antwoord Red Rocks,” the AXS and Bandsintown links are still listed but redirect you to an error message upon clicking. Now there are tickets are on sale (starting at $204) through third-party vendors like VividSeats. But since we haven’t seen official tickets go on sale use caution, because it’s perplexing as to where they’re getting their tickets from (we’ve reached out for comment but have not heard back yet).

Our guess is, Die Antwoord jumped the gun on the announcement and Red Rocks/AEG weren’t ready. We’re still very hopeful Die Antwoord will be performing at Red Rocks on August 20, 2017, but don’t take our word for it just yet. 303 Magazine has reached out to both AEG and Die Antwoord for comment, so be sure to check back here for updates as we learn more.