The Hidden Secrets of One of The Oldest Churches in Denver

Nestled in between sky scrapers, busy city roads and the heart of downtown Denver, there are very few places in the Mile High City that have the beauty, history and awe that the Trinity United Methodist Church holds in every corner. You have probably passed this old church more than once, maybe glancing as you drove down Broadway while crossing the treacherous intersection of 18th Avenue. But there’s more to this church than just being a fixture of our city—there’s history, romance and one great tour guide, Lynn Willcockson.

“We’ll take your coffee with us, but we may just have to leave it some place,” Willcockson said as he started our tour after some bakery delicacies and coffee. 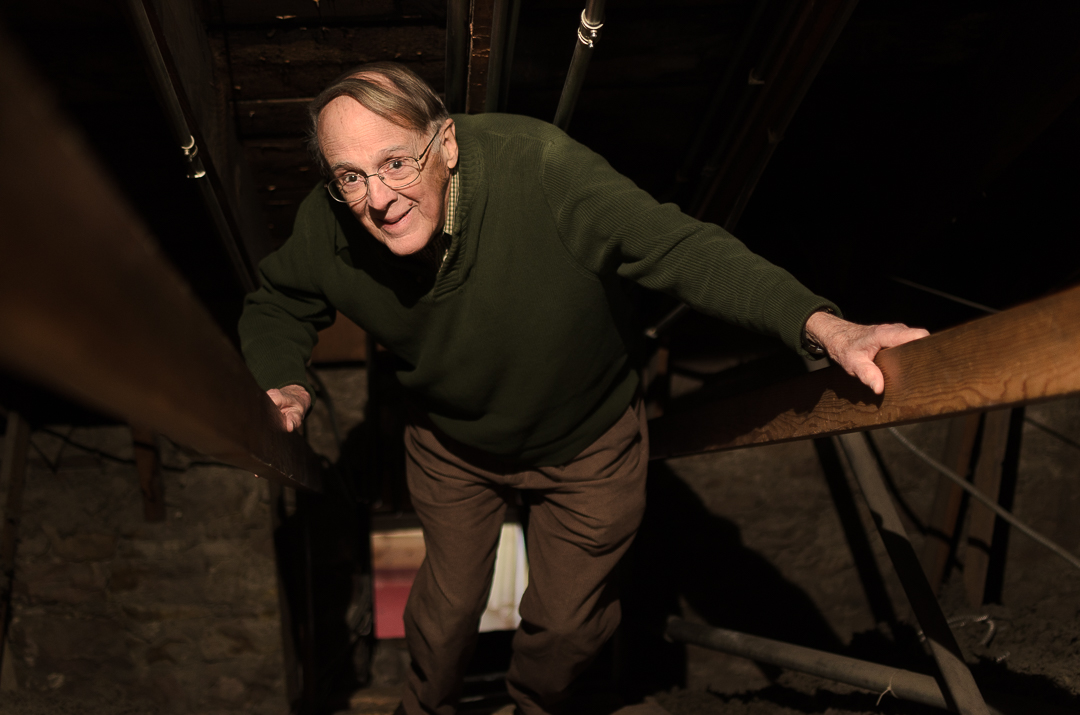 A gentle and friendly heart, Willcockson has been a member of the church since 1960, where he met his wife, Liz.

“There is a lot of subtle symbolism in this building,”Willcockson said. “They don’t make this anymore,”Willcockson said as he pointed out the original, subtly ornate doors. We head into the sanctuary of one of Denver’s oldest church. 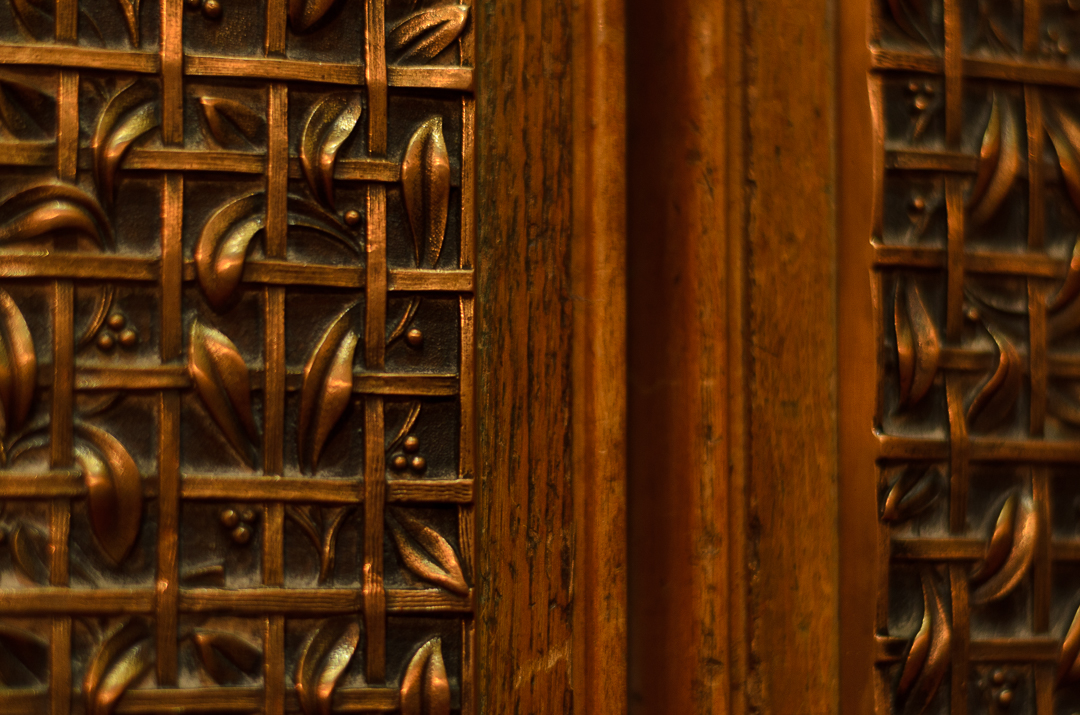 Not one detail has gone unnoticed here. It’s ornate and magical in appearance, but not overdone. Built in 1888, nearly every part of the church is original and designed down to the smallest detail. Every door hinge and knob are intricate, and every window in the church is stained-glass—even in the closets and dusty old stairwells. Everything has a meaning and a purpose. The baptismal is placed just so that the 11 a.m,. sun during Christmas time shines through a stained-glass window and lights up the angel who holds the water basin. The organ itself takes up an entire wall—it’s one of only 13 Roosevelt organs in the country, another rests in at First United Methodist Church in Boulder. Even more impressive, the organ has 4,725 pipes in 82 ranks. Roosevelt No. 380, as it’s called, is one of the largest Roosevelt-built organs of the 19th century still in operation, and has an estimated value of over $2,500,000 today. 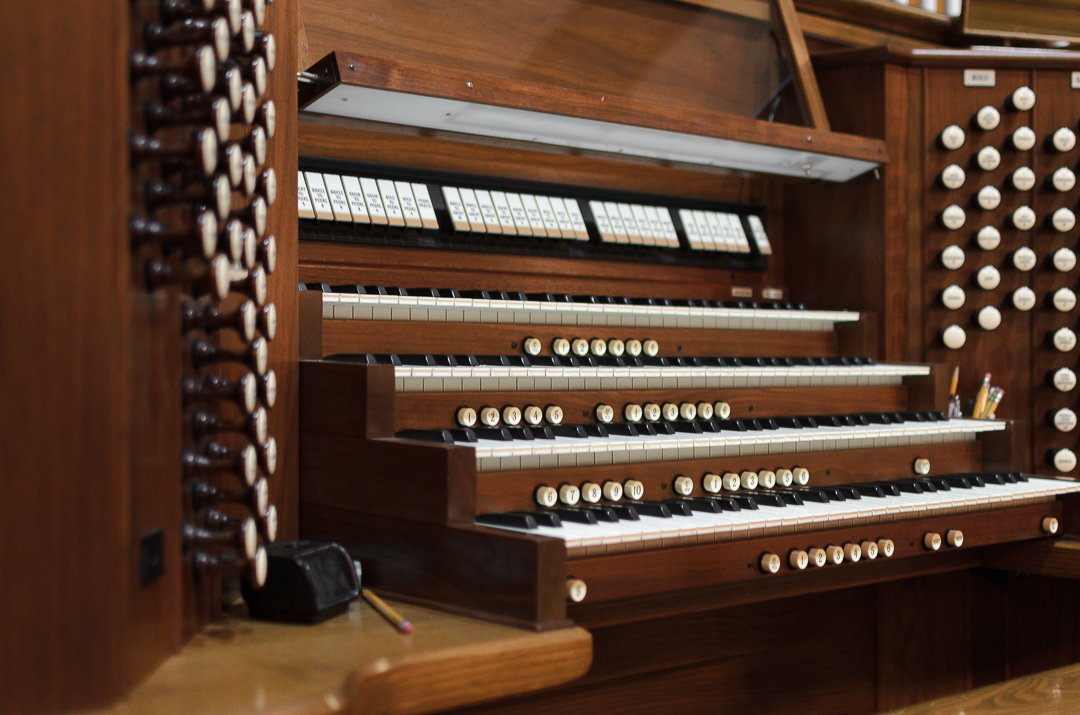 The Holy Trinity is made of the Father, Son and Holy Spirit, and three is a theme throughout the church with 66 lights around the organ symbolizing the books in the bible, three intertwined circles on interior doors and on the ends of each pew and three arches over the Broadway entrance.

The entire infrastructure is meticulously detailed and was built in about two years—fast for even today’s standards. Robert S. Roeschlaub, the church’s architect, instilled a midwestern influence and exemplifies the “modern gothic” design style. Roeschlaub’s architecture is distinct across the state with his use of Castle Rock rhylite for the exterior and imported oak in the interior. 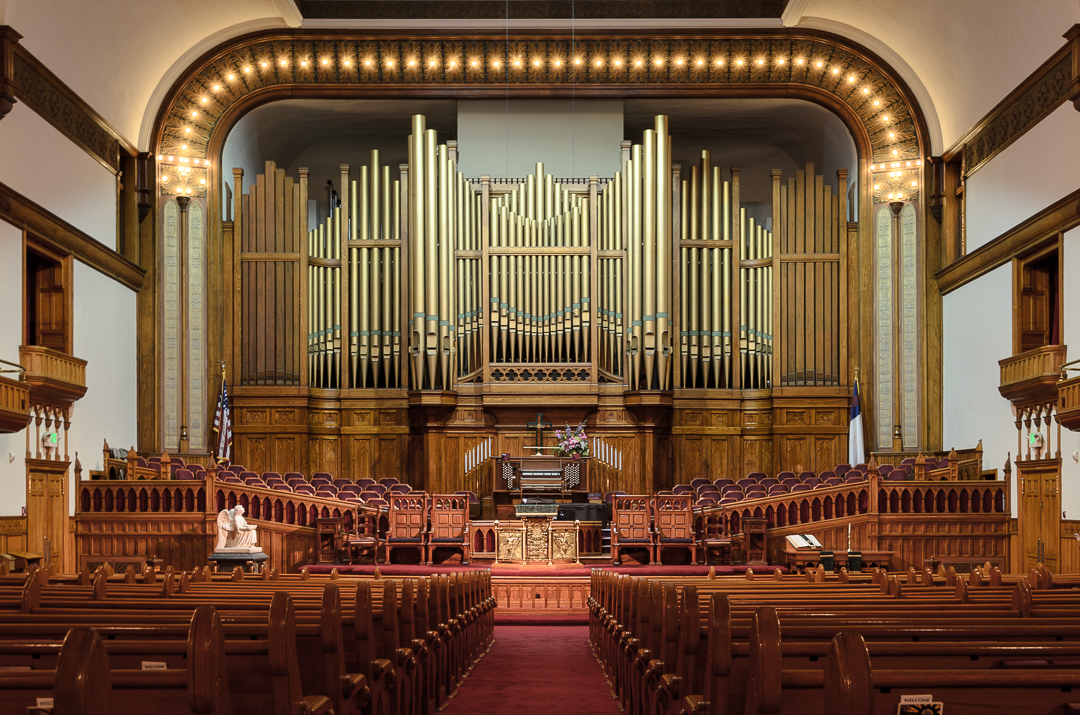 “All the wood in here is oak,” Willcockson said. “Colorado is not noted for their oak trees. So, this was all brought here and built on site.”

Willcockson said many have told him that the inside of the sanctuary feels “good” because of the natural colors that surround. The stained glass is not brightly colored with brilliant shades of red, green and blue. Instead, a subtle and beautiful array of shy hues emulate Roeschlaub’s muse and God’s creation–mother nature.

The large circular stained glass inlays have 12 sections on each, possibly representing the twelve disciples. Each section has two blue dots, except for one section on one of the inlays. There is one tiny red dot in place of a blue, and it is thought to represent Judas, though no one is certain of the meaning. 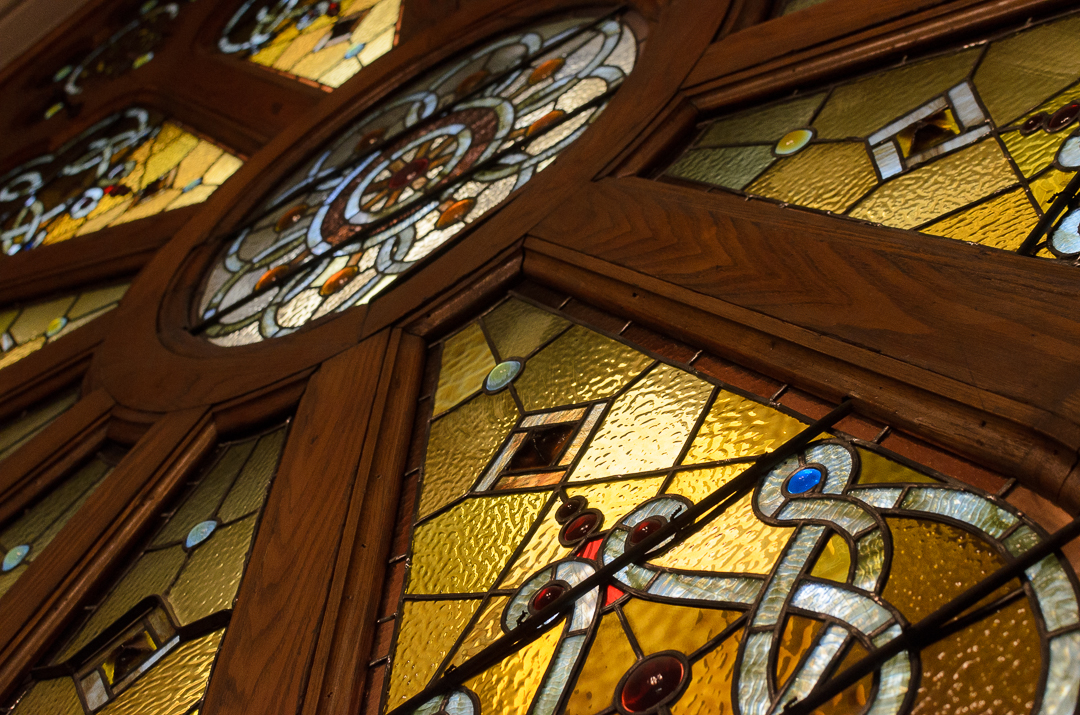 While the sanctuary is magnificent with its own history, the attic of this 1800s church holds the history of the church, its members and the country. Lynn opens the door to the drafty old stairwell to the attic. The chill slinks down the stairs, but invites us up to explore more. Every step we take up the wooden spiral staircase is weighted with the footsteps of history and the people before us. A simple ladder leans against the wall, with a tiny entry into the attic. At 82, Willcockson climbs up the latter and through the dusty tunnel with us, and we’re greeted by the smell of old, the writings of the past and a heavy gratitude to study architecture. 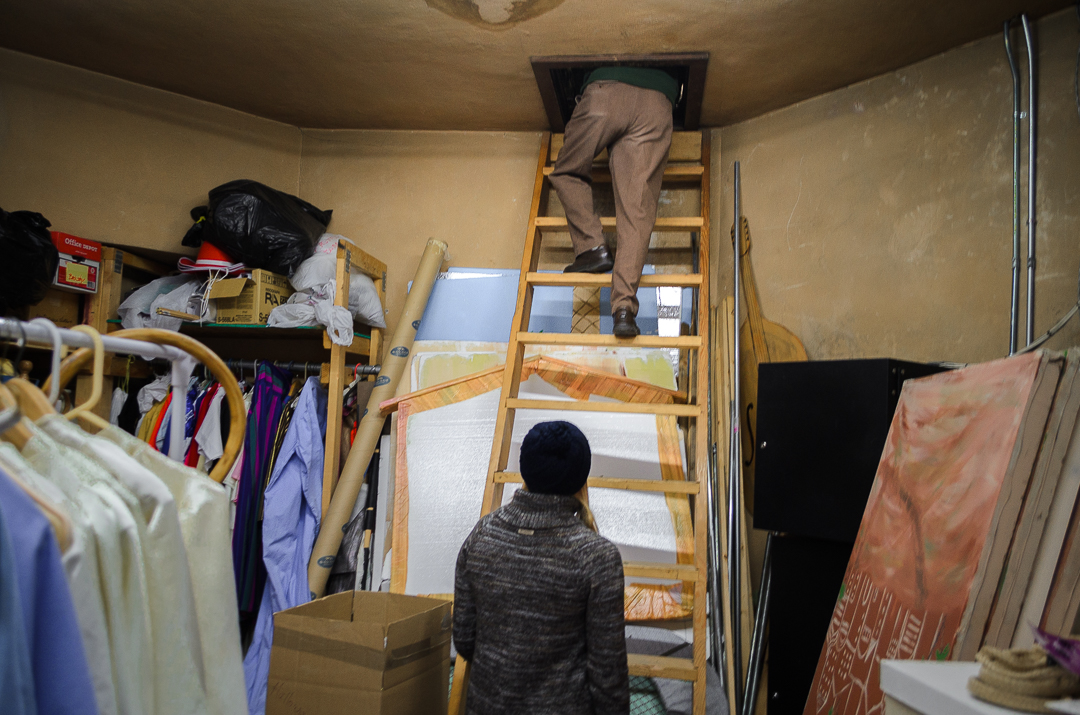 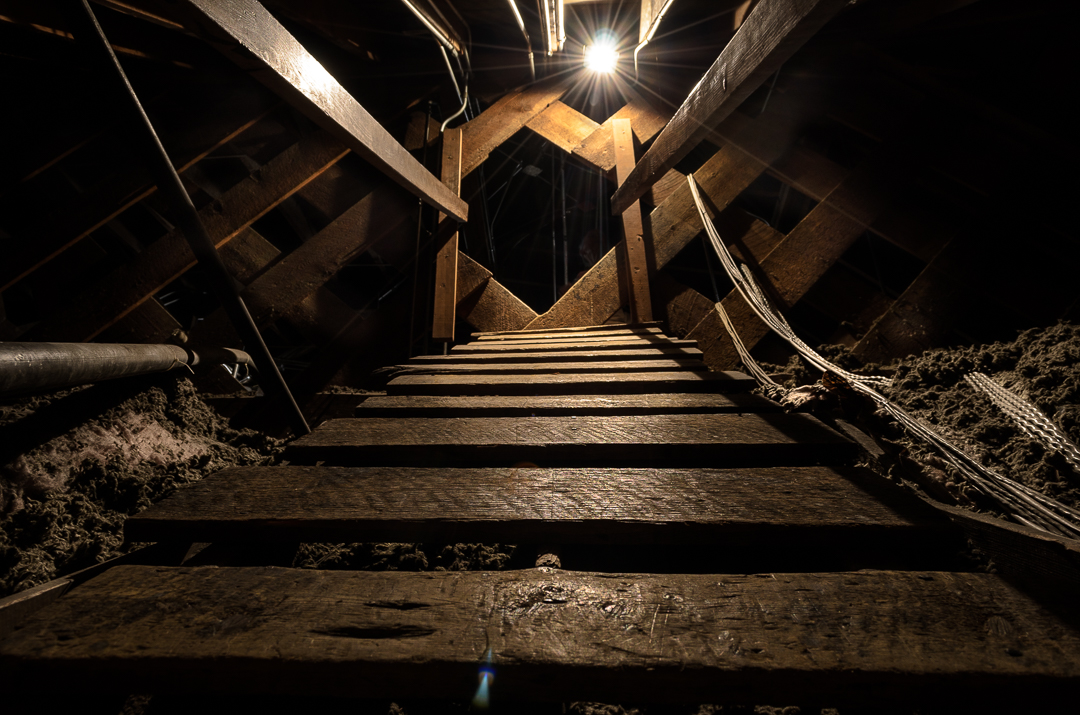 On a lattice in the attic, there is a message left in 1889 in pencil, still there today, it reads

“This church was built during AD 1887 and 1888 and was opened for worship and general service in December 1888. Henry A. Butchel was the pastor during those years and Bishop H.W. Warren preached in the main audience room at the opening service December 1888. What have you done since this church opened to make it a benefit to mankind? We trust your entire duty to this mission. This church extended a helping hand to the poor people outside of this church. Do you allow the poor to enter this church with the same welcome as those in costly robes?”

There is a sentence that the church has not been able to decipher. Take a look and see if you can read it. 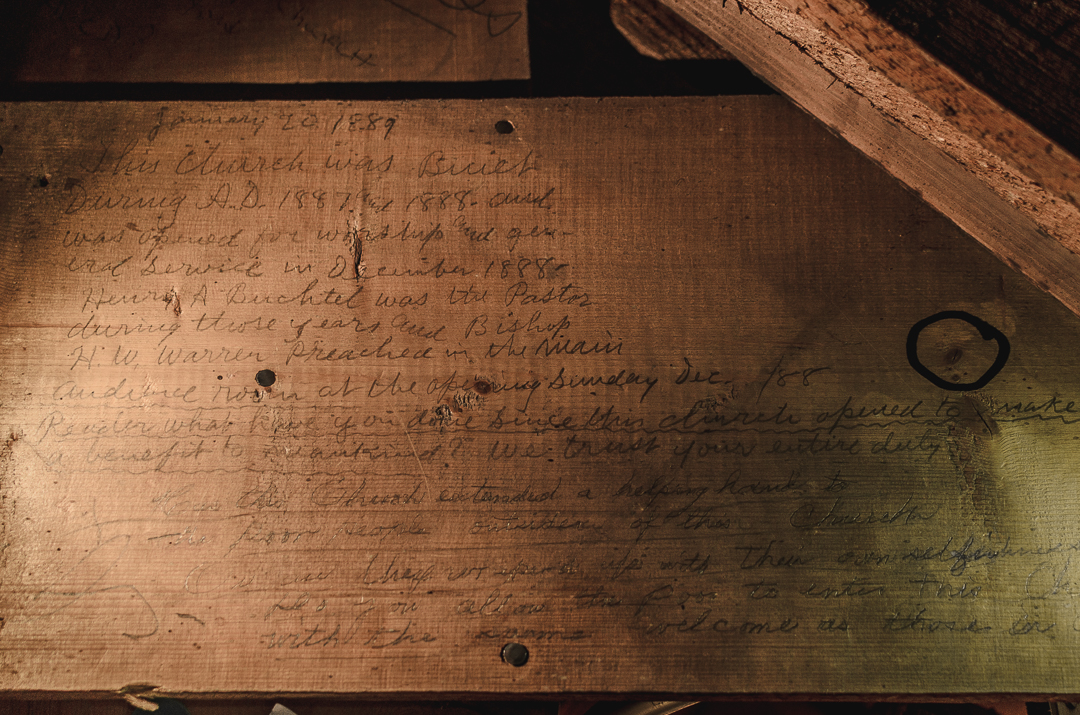 Also along the lattices in the attic, people have documented the history of their time. One reads “February ’82 unemployment 10 percent rising. Rich are getting richer, poor are getting poorer. Reagan screwing up the country.” Some people leaving their mark every year they visited the attic. 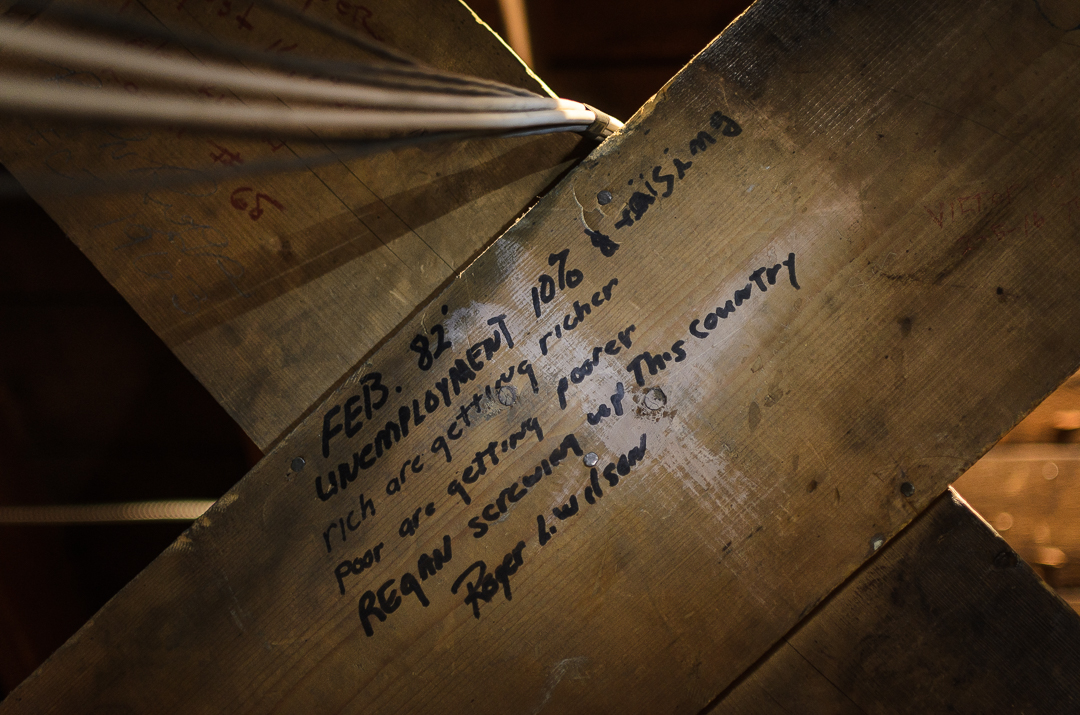 But there is more on this tour, and we crawl our way down from the nearly 160-year-old attic to head to the steeple. Again, we make our way up a drafty stairwell, complete with a stained glass window, and climb a simple wooden ladder. The steeple is 183 feet 7 1/2 inches tall and again is made with Roeschlaub’s signature Caste Rock rhyolite. As Willcockson opens the hatch, we’re in the middle of an 1800s steeple overlooking modern-day Denver. It’s hard to imagine what the people who first came up here saw, and what they might think looking out today. Cars and business people passed us not even knowing we were there and not knowing the beauty and history of the place holding our feet up.

“This is a great place to watch a parade,” Willcockson said. 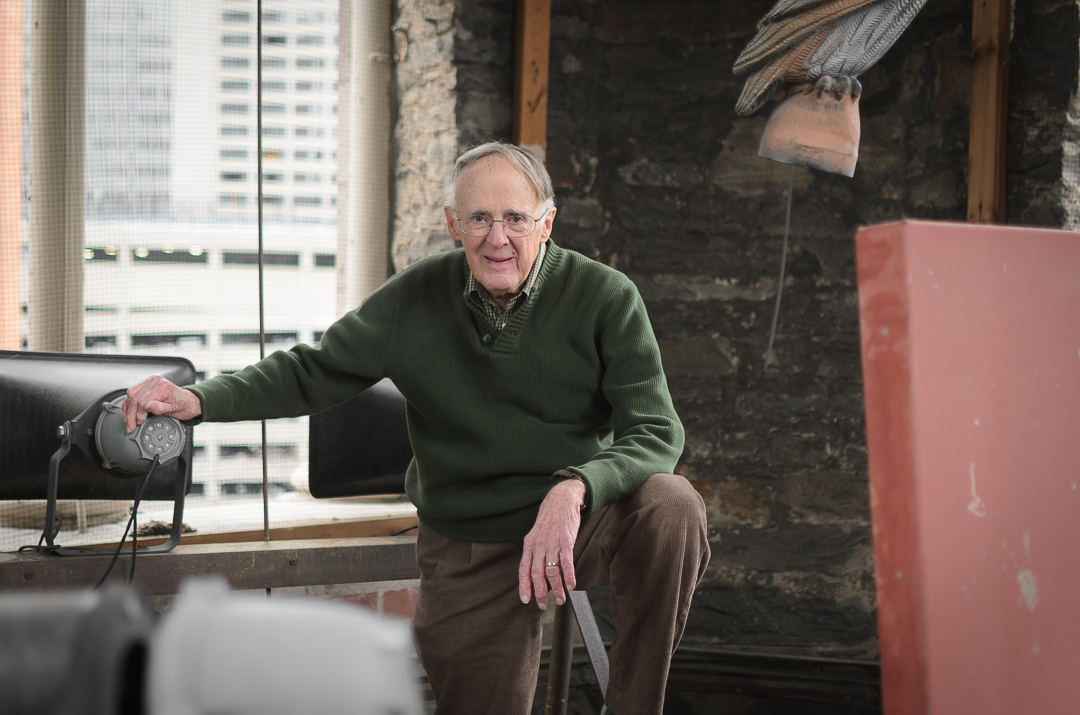 As regal as the steeple is, there has never been a bell, so a set of speakers plays the bell sounds. Lynn can count them on the dot. Willcockson’s eyes light up as he tells us the story of every inch of the facility. It’s apparent this place has more than a religious connection for him, he has a very deep personal connection. He seems at home and alive in the church, but when asked if this is where he finds his peace, he said it’s close.

“Oh, I’m an outdoors person. I like birds, so being out in nature is where I find my peace, but I come close to it here,” Willcockson said.