What’s Next For the Women’s March on Denver?

By now you’re probably more than familiar with the Women’s March on Denver. At this point, even with everything going on, it might be the main thing you’ve talked about this week. And it’s true, this march seems to have an all-consuming power that catapulted it from peaceful protest to cultural phenomenon. But most phenoms, from the political to the pop-culture, they have a tendency to fizzle after an initial burst of popularity. That’s why we spoke with Cheetah McClellan, one of the original organizers of the Women’s March on Denver, to get an idea of how she and her teammates plan to translate that energy into future events and goals.

From creating a parent organization called MarchonColorado.org to organizing weekly meetings (including one live-streamed this Saturday) and planning for the annual return of the March, McClellan explained what they have in the works, as well as why critics of the event should still get involved.

303: Did you expect the turnout to be that big?

Cheetah McClellan: Oh no, It was huge a surprise. I kind of have been joking and laughing, like ‘Oh typical women, we are always underestimating our power’ [laughs]. But yeah, it blew my mind.

303: Did the turnout change your future plans with the March?

CM: A lot of people were asking us our plans before the march and we said we had a blurry vision and that vision is still a little bit blurry. However it’s no longer a matter if we’re going to move forward, it’s definitely now a ‘how are we going to move forward?’ I’m still getting hundreds of messages every day with people offering help and suggestions on how we can move forward so there is a lot of passion and energy out there still. It did not go away after the march. 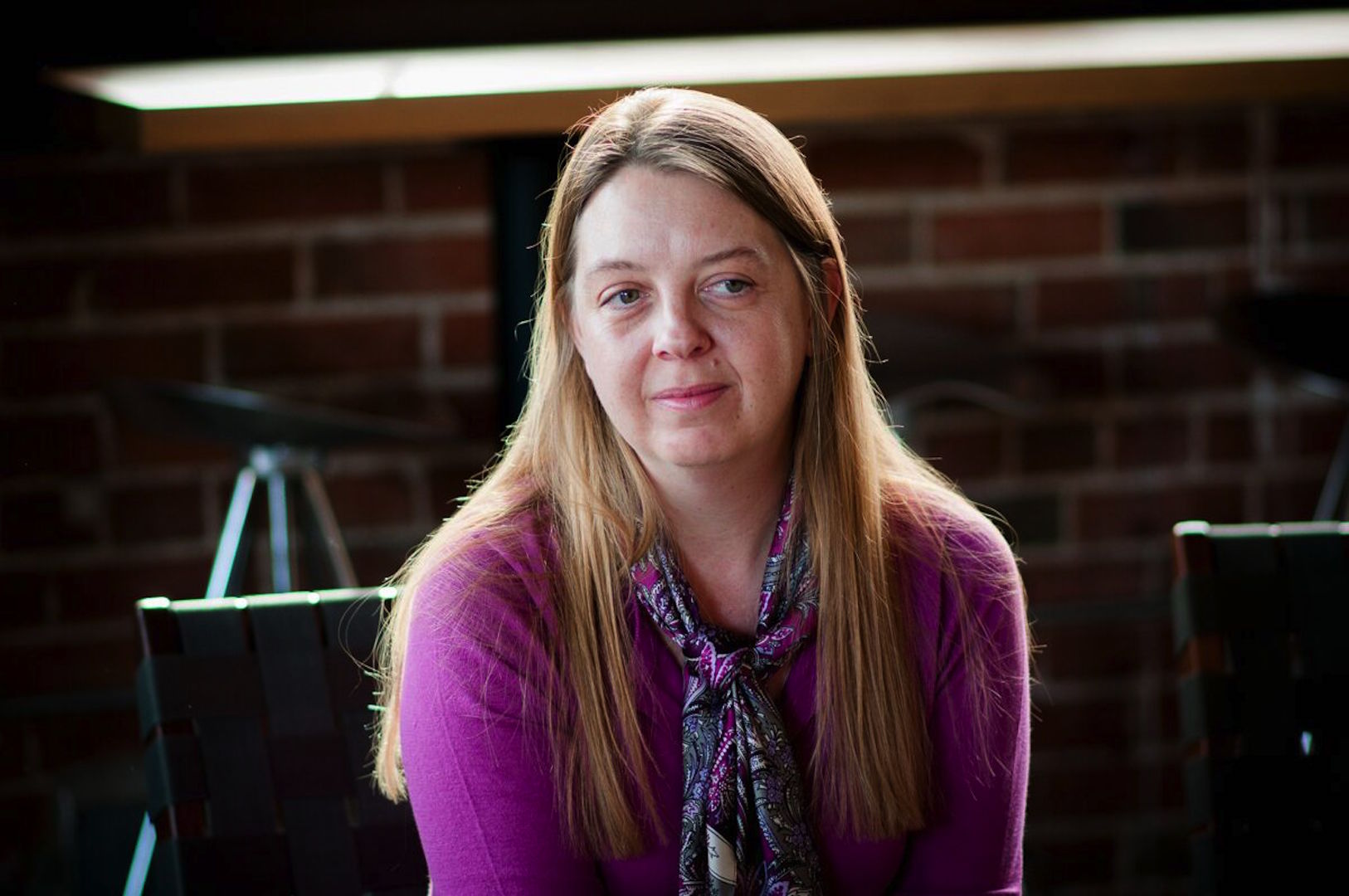 303: How are you going to capture that passion and translate it into future work?

CM: So, we actually have a meeting planned this Saturday, to which we are inviting 200 community members and organizations to step forward and tell us how they see us moving forward and what part they want to take in it. Because really how we move forward greatly depends on who moves forward with us, right? And so we’re not seeking to reinvent the wheel. There are tons of great non-profit organizations that are doing the hard work and have been doing that hard work for 20, 30 years. We are definitely not seeking to take anything away from those movements or organizations. We really want to seek to support them because now we have an army of women.

We have this huge support base and I love the idea that if a group or an organization needs help that they could call us and we could easily provide them with 1,500 people at the drop of a hat to go march, if needed, or to write letters or to make phone calls. So a lot of what we are hoping to do is to use some of this energy and translate it into legislative action so we can have impact on the lawmakers the laws themselves. But at the same time, we also want to make sure we are providing opportunities for people to be active in other ways besides politics. March on Colorado will do “volunteer at the soup kitchen for a month” or a coat drive or a young women’s mentoring program. So there will be other opportunities for those who still want to be active but don’t want to be political. And, of course, we hope there will be some crossover so that some of the community action stuff will transfer into the political and vice versa. It’s really one thing I love about the cause of human rights, that it’s huge and that’s there’s not a limit to what we can do and how we can help and who we can support. Basically, if you care about being human, hopefully we can find something for you to do.

303: What type of legislation are you hoping to affect?

CM: I think it’s safe to say anything to do with women’s reproductive health will be on the top of our list, as well as things that have to do with immigrants. Once again, really focusing on those things that very personal and very deep and would actually hurt people. We want to make sure there is no harm being done and that will be our main focus for legislation. Where is the most harm likely to happen? That is where we will focus our attention. Right now we have people like [state senator] Morgan Carroll working with us, [state senator] Irene Aguilar and some of the other senators and speakers that were at the march. [Organizer] Jessica [Rogers]  took part of a big luncheon on Monday in which a lot of these women step forward and said we want to support you.  And a lot of those women will be at that meeting at Saturday. That meeting on Saturday is not just organizations. It’s a few community members as well. We are trying to make a good blend. 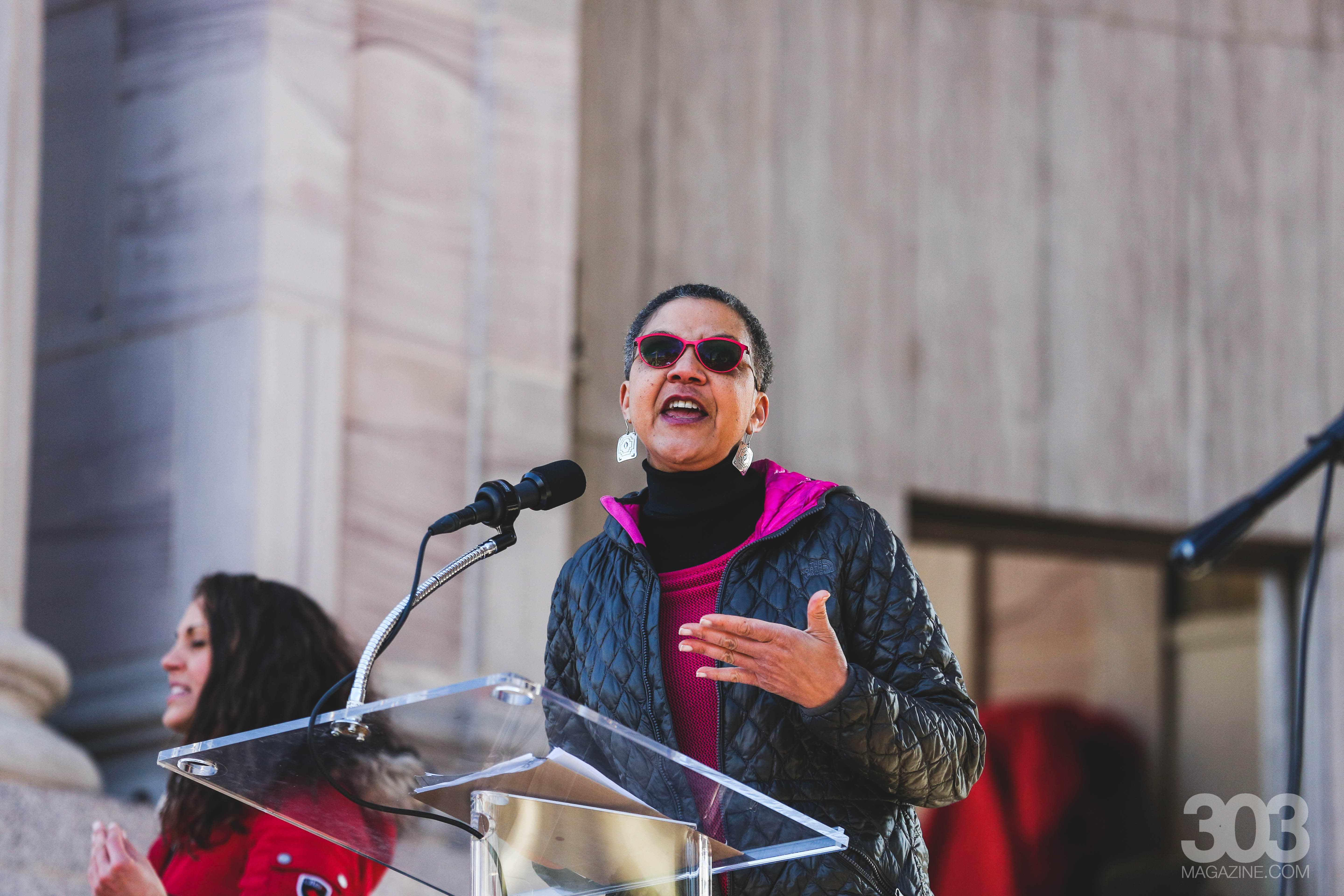 303: Since the March did not focus on legislation, there are some critics who say it was not successful in achieving anything specific. What do you say to those people?

CM: Well I would say baloney [laughs]. Obviously, we achieved a huge community connection. I don’t think you bring together more than 100,000 people into one spot without forging some bonds and some connections. I know for a fact that within the 500 volunteers major connections were formed. So a lot of networking. Also, we had many many elected officials supporting us. That let me know were successful because if the whole idea was to send a message to your elected officials and your elected officials step up and say we heard you and we support you, then we are a success.

303: And that message was supporting women’s reproductive rights and defending marginalized communities, etc?

CM: Exactly, with our mission statement those were the messages we were sending.

“My response is we absolutely welcome pro-life to join our movement, however, we will not be changing our stance on being pro-choice.” 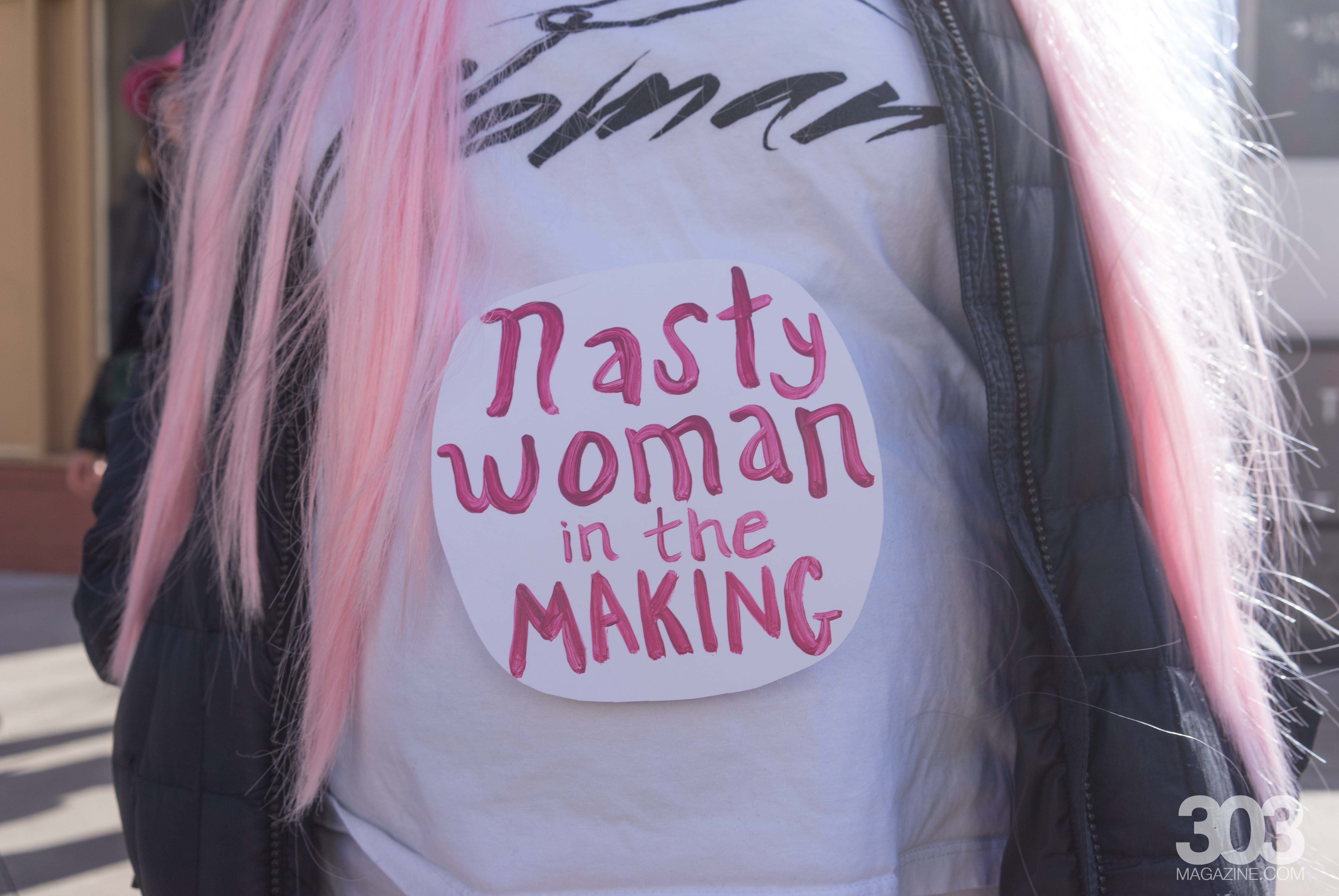 Pregnant marcher at the Women’s March on Denver 2017. Photo by Brittany Werges.

303: Some women who are pro-life felt like they were not welcomed. Why do you think that is and what would you say to them?

CM: In my knowledge, not one pro-lifer approached us and said ‘Can we speak at your march and this is what we want to say.’ If someone did approach us after December and asked us to speak, all of our speaker slots were filled. We have heard of that. Well, if you asked to speak and we told you no it was because we already had 30 speakers that had been scheduled. So I feel like it’s a false accusation. It’s not true. My response is we absolutely welcome pro-life to join our movement, however, we will not be changing our stance on being pro-choice. So if they want to join our movement they need to recognize they cannot villainize those who think differently than them. So if you want to join our movement you have to accept we are pro-choice. And you know, I don’t think pro-choice and pro-life are necessarily all that different. I am pro-life. I am not for abortion. Nobody wants people to have abortions. We want that choice for when it’s medically, socially and emotionally necessary for women to do that. That’s our stance. It’s all about choice. Nobody is saying we want people to have abortions. They are welcome to join us but we are not going to tolerate people villainizing us.

303: What other events do you have coming up?

CM: We have weekly meetings planned for the whole month of February. I think we have two or three meetings planned each week and all of those meetings are open to the public focus on community building and networking getting that feedback from people and how they want to move forward with us.

303: There are a couple marches coming up including Colorado Stands with Planned Parenthood on February 11 and the march for Donald Trump to release his tax returns on April 15. Are you involved?

CM: Not right now. My laundry is piled up pretty good. Even just the feedback and interviews, all the stuff we have going on after the march has been so overwhelming I can’t even think of doing another march right now. We are thinking of how to make the Women’s March on Denver an annual event and focus on that. But the idea is that those types of marches and events can be found centrally located on our website. I love the idea that if you love being an activist and you want something to do that impacts real social change you can come to MarchonColorado.org and find something to do. That is my bigger vision, that we become a hub for activism.

303: The Women’s March on Denver was successful, in part, because it was connected to a larger national movement. Have you spoken with any other national organizers since the March?

CM: A lot of us organizers have our own private Facebook group. There are about 300 of us on there, so before the march we were connecting with each other and sharing ideas and giving feedback. I do know there are national calls every week, and national organizers get together to take part in these calls. So far Jessica [Rogers] has been doing that. She has been communicating with them more than I have.

To learn more about the future of the Women’s March on Denver go to MarchonColorado.org or watch the live-streamed meeting on Saturday, January 28 on Youtube.