A cross-country bike ride gave founder Erik Gordon an appreciation for coffee that is rivaled only by his passion for the outdoors. He sought to create a cup of rich coffee that mirrored the optimistic feeling of starting out on a trailhead, and thus, Carabiner Coffee was born. The company is run out of Ol’ Blue, a refurbished VW van that is Gordon’s home, business and dreams all wrenched together. After some heated haggling, he purchased the van to support his lifestyle, and it’s now an iconic symbol of the company.

Light, medium and dark roast one-pound bags ($17) are all reasonably priced for locally roasted beans. Even the packaging has a rustic style — with stenciled logos on hearty brown paper bags paying homage to Carabiner Coffee’s rugged founding. The three roasts — the business, the skooch and the dream — were the fruits from the fateful journey.

Upon finishing his BA in Minnesota, Gordon biked across the West and ended up briefly living in Portland. Despite being well into his 20s, this trip was his first coffee experience. An incredible trip coupled with arguably the world’s best beverage was all he needed. He found a new perspective and passion. Colorado’s sun-kissed lifestyle eventually lured him from the clouds of the Pacific Northwest. Gordon worked at coffee shops for eight months, during which he learned the science, and more importantly the art of coffee. The caffeine-fueled odyssey ignited a new outlook on life, maturing into a penchant for coffee and finally simmering into a well-branded company. 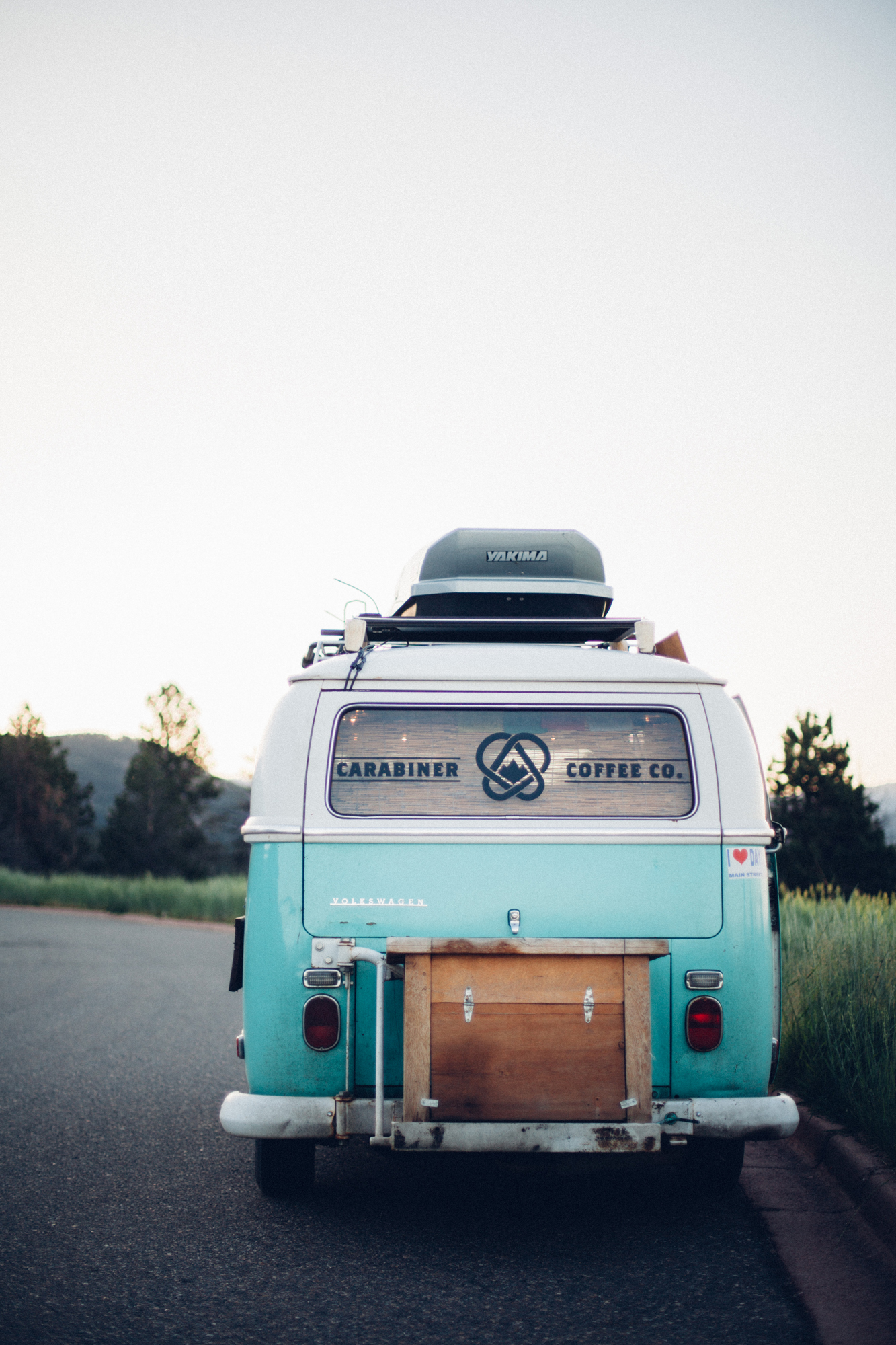 The early days of Carabiner Coffee weren’t easy for this nomad. While living in the van he bounced between Summit County and Boulder, getting kicked out of parking lots and what he mistakenly thought was National Forest land. He’s spent the last two and a half years touring the country, selling beans and cups of coffee out of Ol’ Blue.

Days on the trail have paid off, and he’s brimming with success as he’s opening Carabiner Coffee’s first permanent location at Boulder’s Rayback Collective this February. But Gordon won’t be homesteading anytime soon. He’ll continue traveling the country with a new partner, Patagonia, a clothing brand famed for its grassroots vibe. The partnership will be crossing the country celebrating minimalist lifestyles with roadside coffee and refurbished clothing. The van allows him to simultaneously be a barista and climber — all while spreading zest for life through spontaneity, keeping him in touch with his customer’s lifestyle.

“As far as a life plan, it kind of just fell into my lap and I went with it. That kind of go for it mentality is what I hope to inspire in my customers,” said Gordon 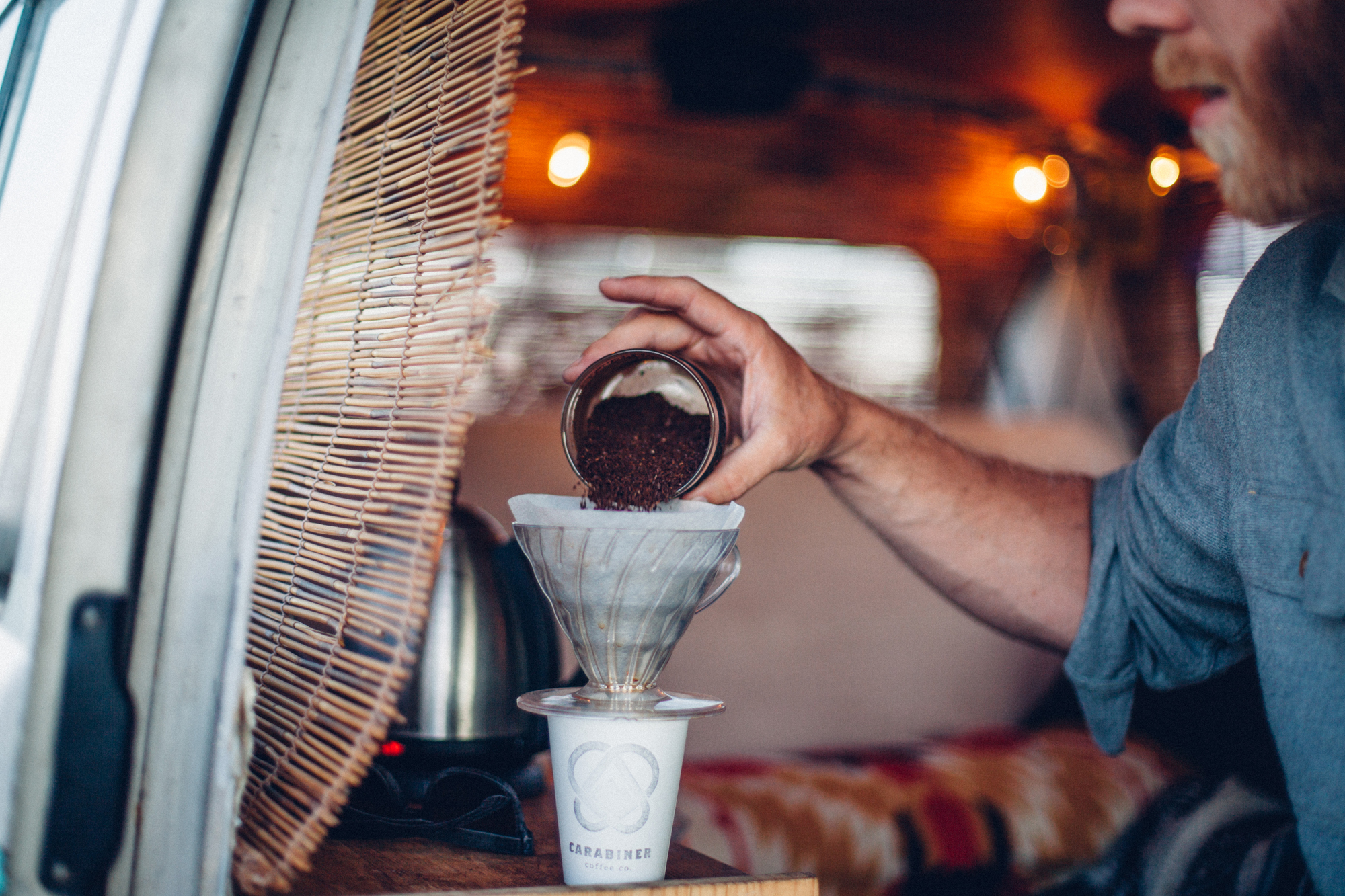 Carabiner Coffee’s success boils down to authenticity. Gordon isn’t just in touch with customers, he’s a part of their adventures — an honest approach to business and thrilling outlook on life. He’s pursued what he loves for the people he loves. As you ski, climb and hike across the continent, keep an eye out for Gordon’s beautiful blue van. He’s traversing the country and will be waiting for you with a great cup of coffee.

All photography by Bailey Batchelor