Chances are, you’ve seen some of Gamma’s iconic murals around Denver. Maybe you’ve seen the grasping hand on Colfax and Williams, or you saw the ode to Bernie Sanders before it was removed. His mural on 37th and Downing (pictured below) has gained national popularity through Instagram and other social media feeds. Gamma excels in massive photorealistic images that are only painted with a spray paint can, by himself. He estimates that he has created over 500 murals during his 10-year career, which began in Longmont. And to celebrate his 10 years of doing what he loves, he went back to Longmont to exhibit prints and original work at the Firehouse Art Center one block from Main Street until December 23. 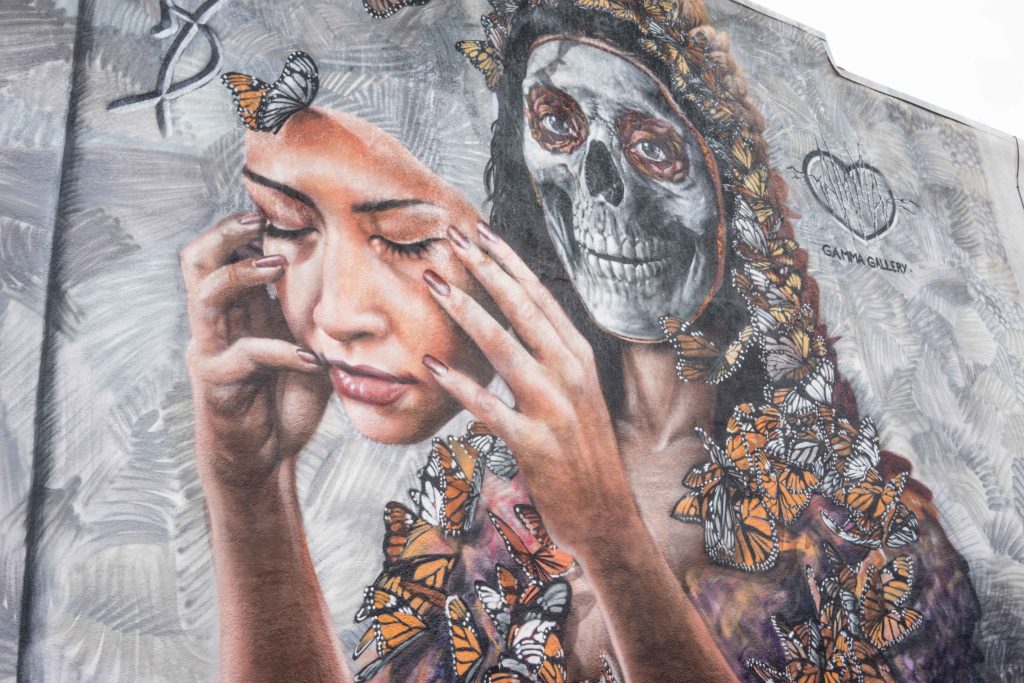 Mural at 37th and Downing. Photo by Brittany Werges

The beauty of the Firehouse Art Center is that the main room of the gallery can be seen in one sweeping glance the moment you enter, but as you walk around the room, each wall feels contained. It allows for multiple artists to exhibit simultaneously, or for one artist to display different styles. Gamma brought a friend to share the space with him, another Longmont street artist known only by the moniker Lyfr, whose pieces use found objects as well as spray paint. Together, Gamma and Lyfr present a sophisticated and dazzling look at street art without being too uppity.

To the right, the exhibit begins with a long, horizontal print from Gamma that can only be described as a tableau of socio-political culture in the last few decades. Bright, almost psychedelic colors dominate the scene, contradicting the collage of… shit we, as humans, should not be proud of (to put it nicely.) There are images of plastic floating in the ocean, chemicals spewing out of a hose held by a man in a hazmat suit, money exchanging hands and oil rigs, to name a few. This piece really bridges the gap between art found in galleries and street art. Gallery art tends to point us in the direction of a belief or ideal without downright addressing it, and often falls short of its potential outreach in a community. Street art tends to shove it in our faces, making it unavoidable. Having this piece shoving its blatant symbolism at the art gallery viewers is nothing short of awesome. 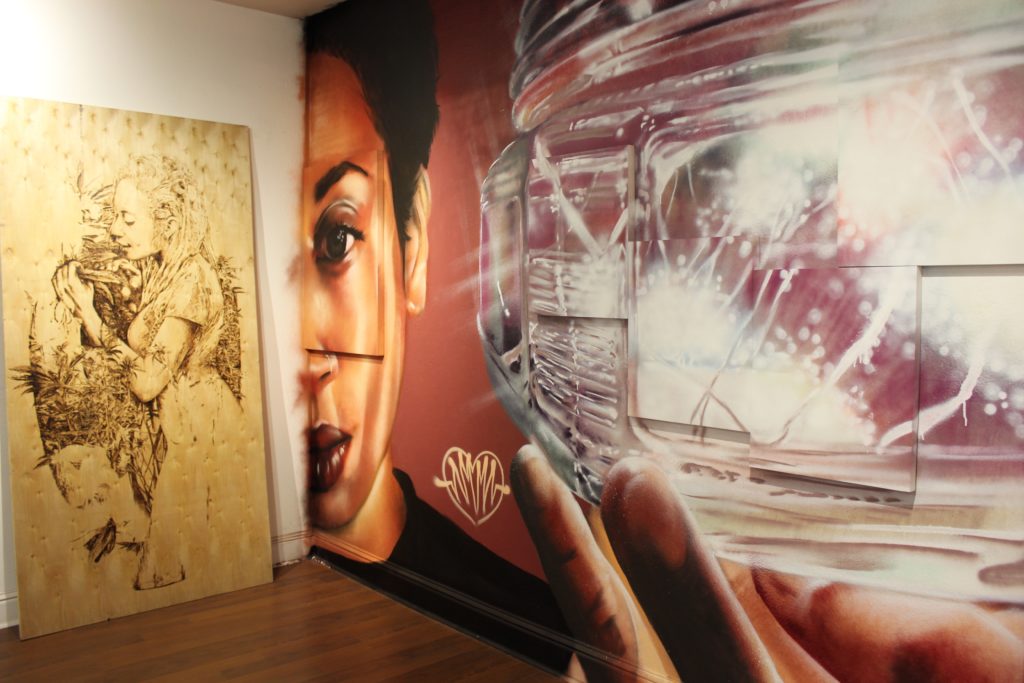 Most dazzling is the original mural by Gamma—which looks at you from the back— spray painted directly onto the wall. Following his iconic style, this mural features a woman holding a jar, eerily realistic from afar. Stand to the side of the wall and notice how the image becomes hazy, undefined and almost like a mosaic. Adding to the depth—and perhaps accounting for the lack of texture on the gallery drywall—there are square and rectangular sections that pop out from the wall. These sections accentuate the photorealism of the subject from a distance and obscure it from close up. In doing so, it proves Gamma’s ability to improvise—a key component to his process—as well as synthesize disparate characteristics into a single, impactful image. 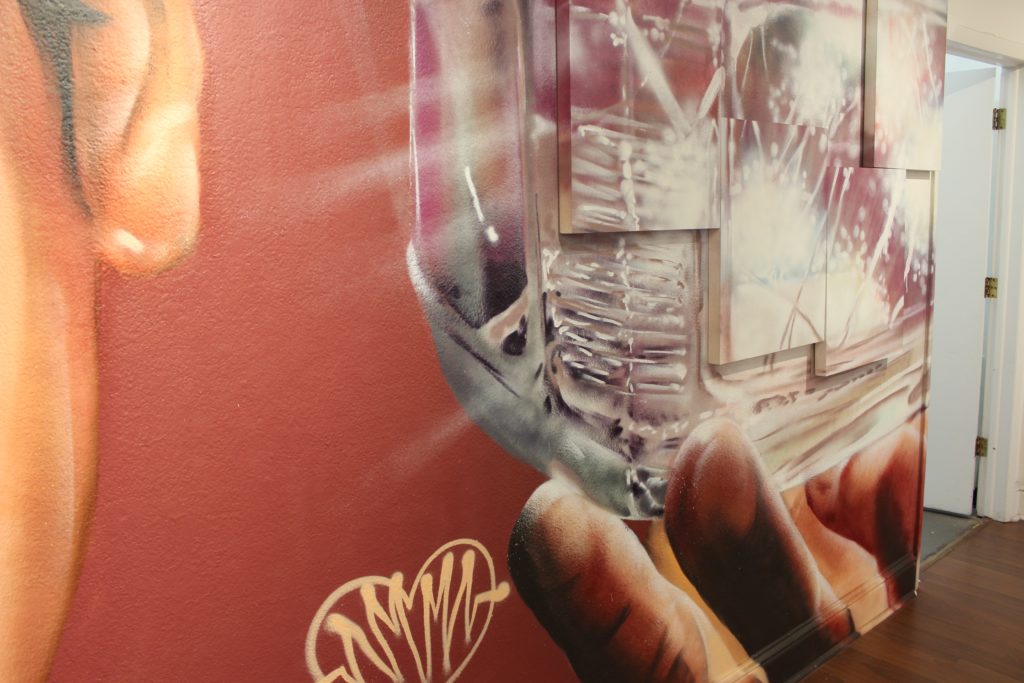 Detail of original mural by Gamma. Photo by Cori Anderson

Lyfr, another Longmont street artist, collaborated with Gamma for this exhibition and his work is displayed in the right alcove and on the wall before the door to the south gallery. These provide a dynamic change from Gamma’s work because they incorporate 3-D elements as well as spray paint. Lyfr is an artist who not only has a deep message to portray, but can do it in a variety of mediums with equal skill. The picture frame that barely holds a handful of used paint rollers tells us that art is as much about the process as it is about the result. 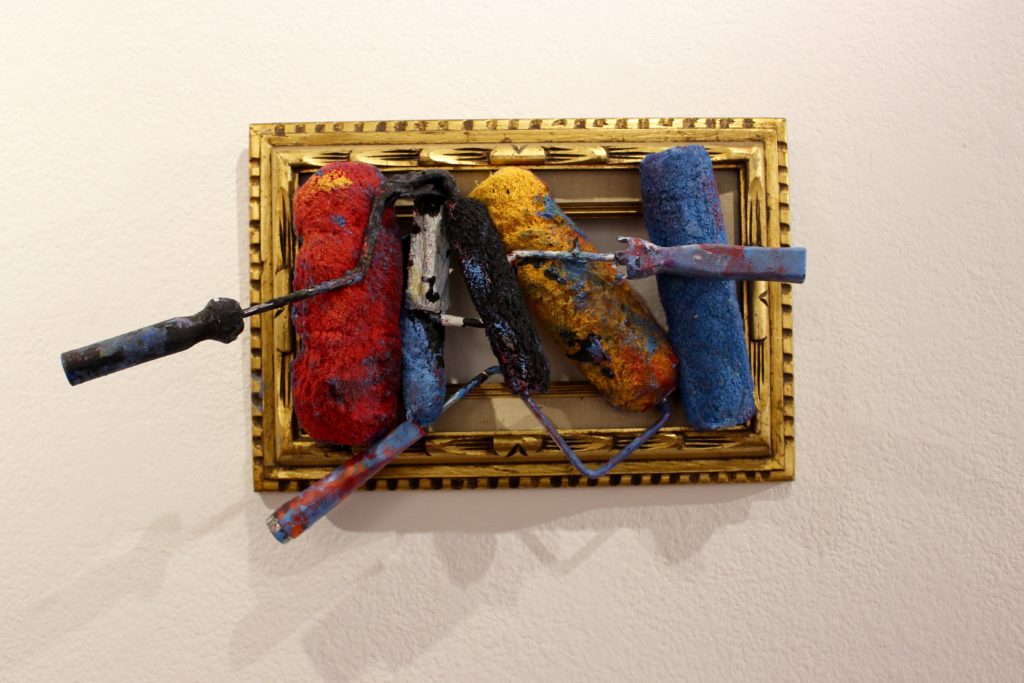 To the left of Gamma’s mural, the entirety of the wall is filled floor to ceiling with photographic prints of Gamma’s street art from the last 10 years, all of which are for sale. It boasts a great variety of images, from the numerous portraits of the likes of Angelina Jolie, Michael Jackson and Bob Marley to the more Bansky-esque images like a snowman holding his heart in his stick-hands.  Some of these prints you will (or should) recognize as Denver classics, others are from places Gamma has traveled to paint, like the North West Walls street art festival in Belgium. 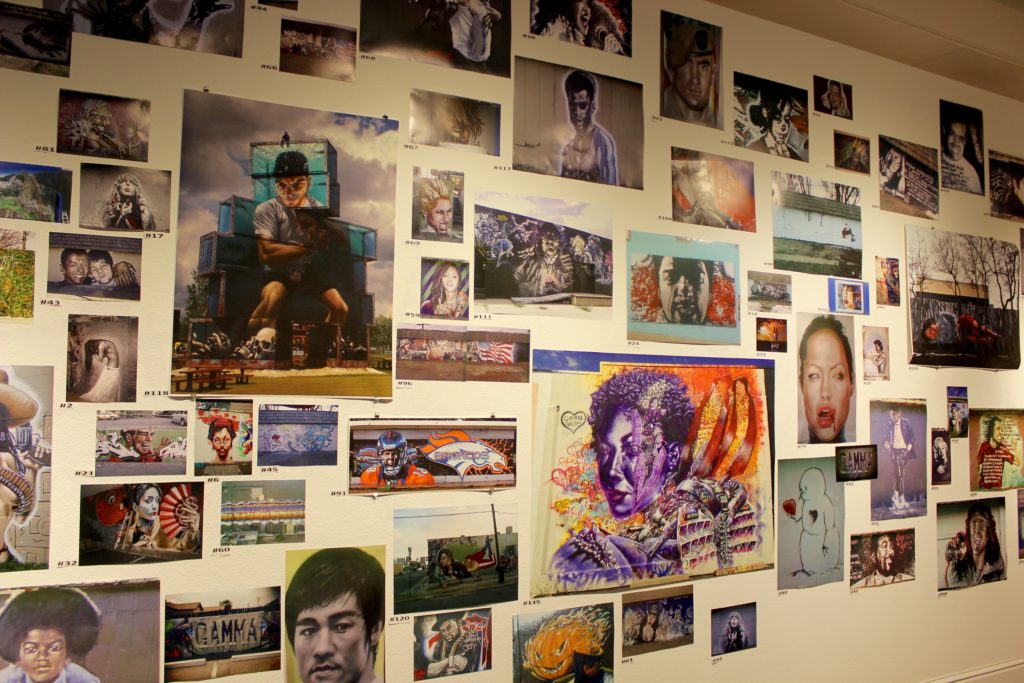 Wall of prints by Gamma. Photo by Cori Anderson

After appreciating the sheer volume of work he has created over the past decade, along with his obvious fortitude with a can of spray paint, take a look at the commemorative etched wooden box that perfectly fits the Gamma Gallery spray can. These are limited editions, and for a fun bit of background about the box you can see a short video of it being made on Gamma’s Instagram. Taking the drive to Longmont to see this ode to street art and to one of Denver’s best street artists is highly recommended. 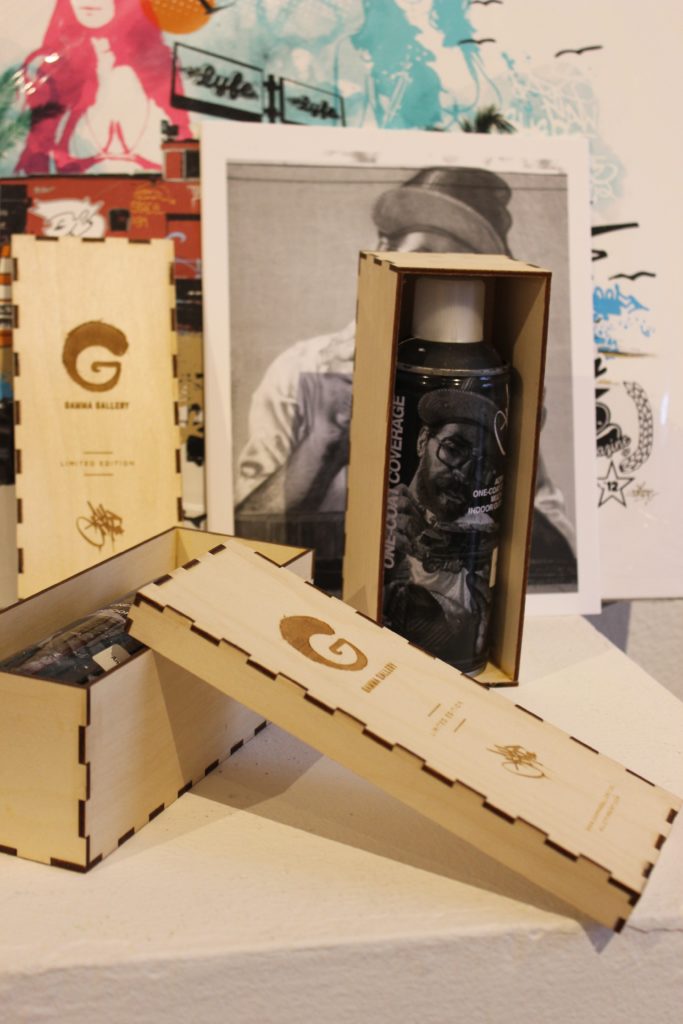 The Firehouse Art Center is located in Longmont at 667 4th Avenue (corner of 4th and Coffman) and is open Thursday-Sunday, 12-5 p.m.