The long-running radio broadcast A Prairie Home Companion made a stop in Denver this Saturday to create an afternoon full of laughs and music. The show has been broadcasting live weekly performances since it’s conception in 1974, and has been viewed as a highly respected and admired radio music program. It was originally hosted and created by Garrison Keillor. In 2016, he handed the torch off to Chris Thile. The program is broadcasted to over 3.5 million people each week on over 700 radio stations domestically and abroad. 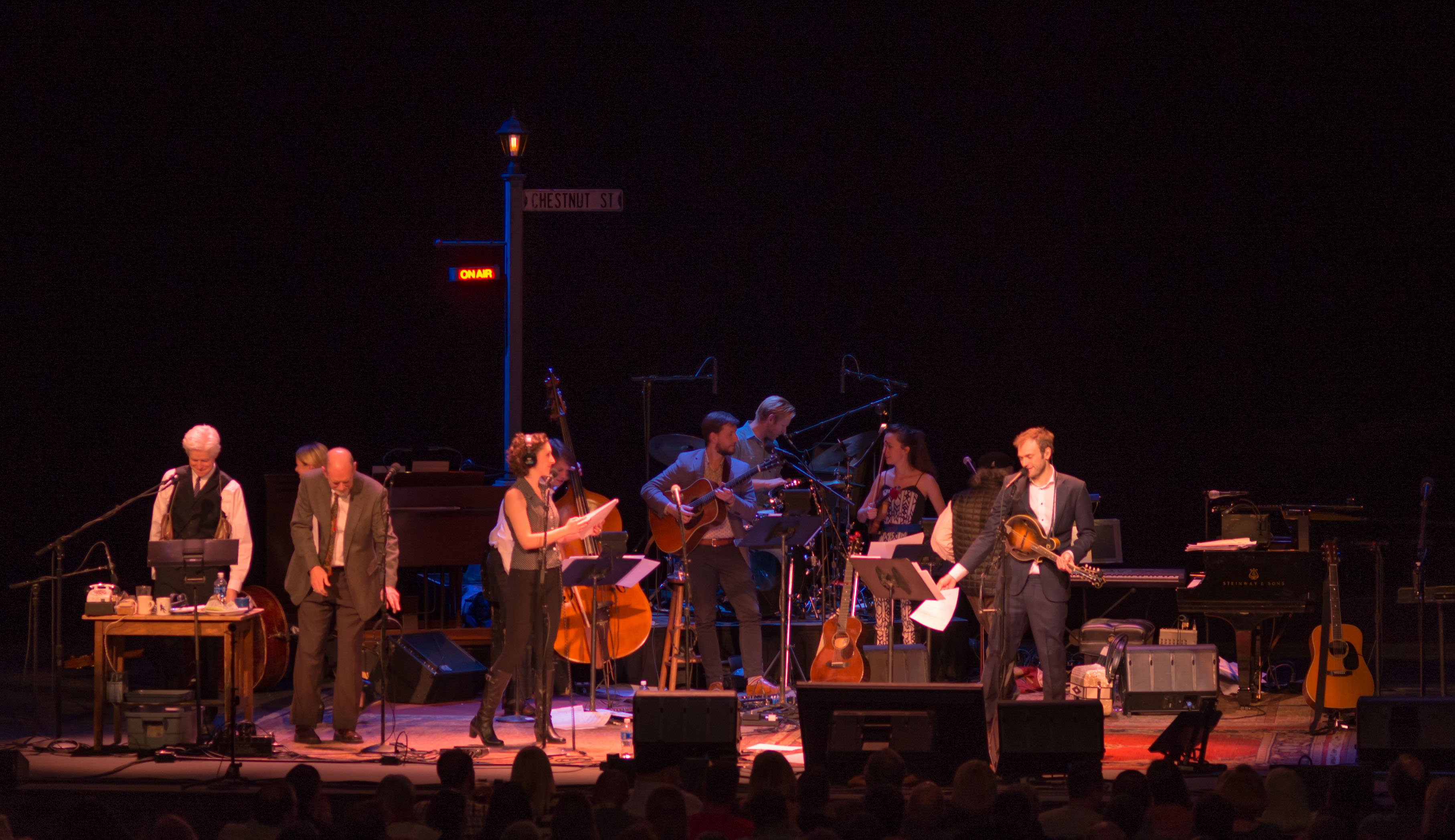 The 42-year old A Prairie Home Companion is centered around a variety of comedic sketches and musical performances. There is a defined structure in how the show was conducted, as there would be a back-and-forth rotation from music and a sketch performance. I truly felt like I got to jump back in time and watch how a radio broadcast was conducted before the era of advanced video and sound production. It was a powerful experience that showcased how tradition can live through decades and still resonate with listeners.

They go on the road to perform live in various cities when it is not being broadcasted in Minnesota, and the Mile High was one stop on their tour. This global phenomenon has created a following all its own, and I had the honor to watch it live in the heart of Denver at the Ellie Caulkins Opera House. 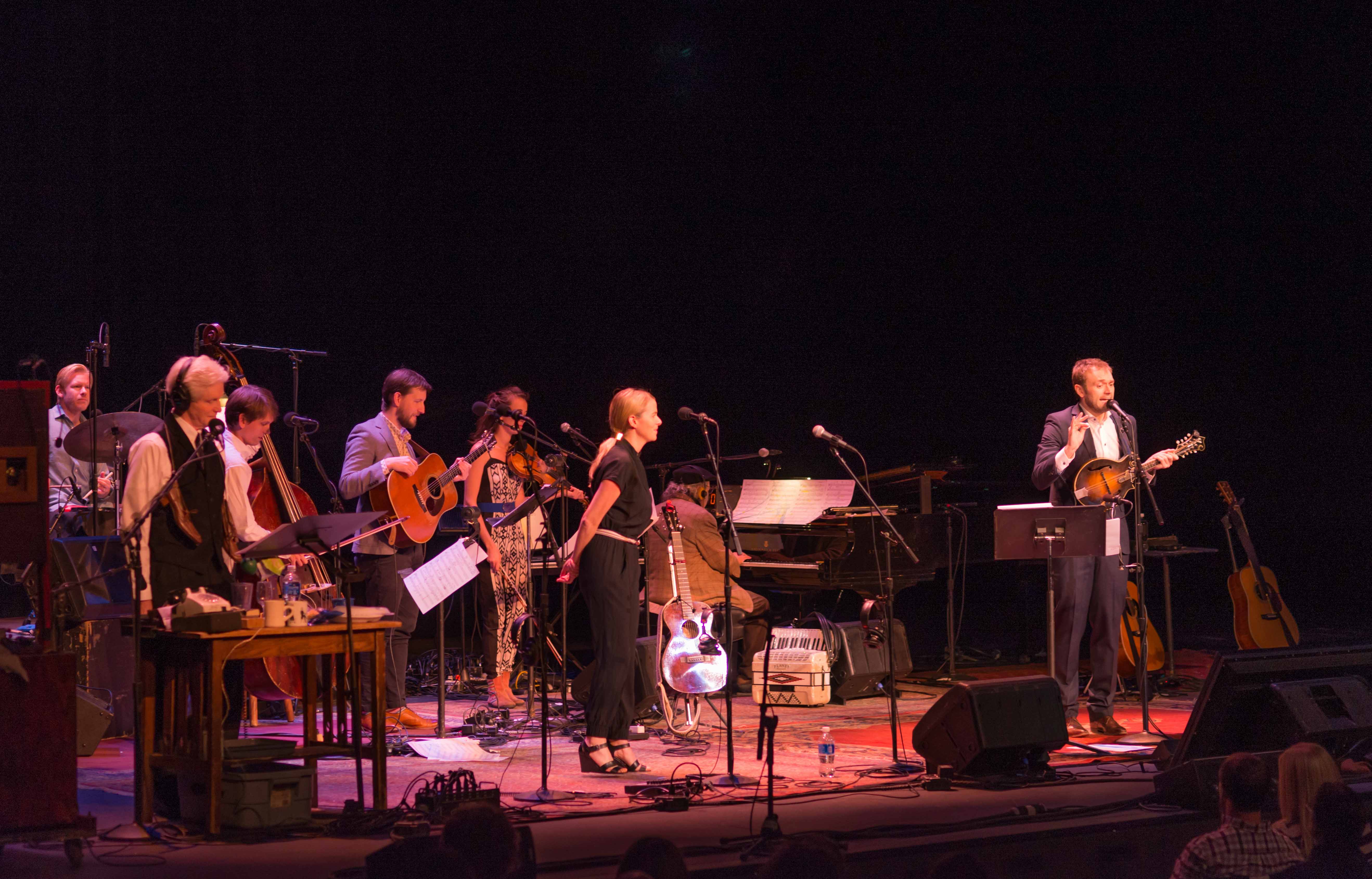 A Prairie Home Companion is known for it’s tongue-in-cheek humor and musical guests, and Saturday’s show was no exception. Musical guests Trey Anastasio and The Staves, as well comedian Tig Notaro joined the talented cast of this weekly tradition.

The program started off with a nice folk and bluegrass song led by host and musician Chris Thile, accompanied on stage with a variety of talented musicians. Midwestern comfort washed over the crowded opera hall as the show went live on air to broadcast to over 3.5 million listeners. It then went into it’s traditional rotation, which highlighted comedy, music and improvisation.

Ellie Caulkins Opera House provided a perfect venue for the broadcast to occur, for the organic string instruments and talented singers were amplified throughout the whole opera house. It allowed for the sound to truly be displayed in its raw and original form. This was definitely the case, for every time host Chris Thile would play his mandolin, he was surrounded by the talent of the band. There was a lot of variety in the music, as they would insert some humor into songs, like singing about Peyton Manning’s obsession with “Omaha” on the offensive line and the “elephant in the room” at the Thanksgiving dinner’s inevitable political conversation.

A segment of the show was called the “instant song request,” where one of the three million listeners texts in and requests a song that the band would perform without any prior practice. A listener texted in “Another One Bites the Dust,” and man, I never thought a bluegrass rendition of it could sound so good. They also included a tribute to A Tribe Called Quest’s Phife Dawg by covering a bluegrass-rap version of one of their songs.

The Staves took the stage first, providing a glimpse into the raw talent of these angelic UK sisters. The three-piece band featured the Sateveley-Taylor sisters, whose chemistry was obvious as the musical talent flowed through their blood. They played a few songs off their Sleeping in a Car EP and some of their early music. It was extremely impressive to watch them go into an almost a capella type performance, as one sister’s voice would echo and loop the other, creating a harmony that radiated in the opera hall. 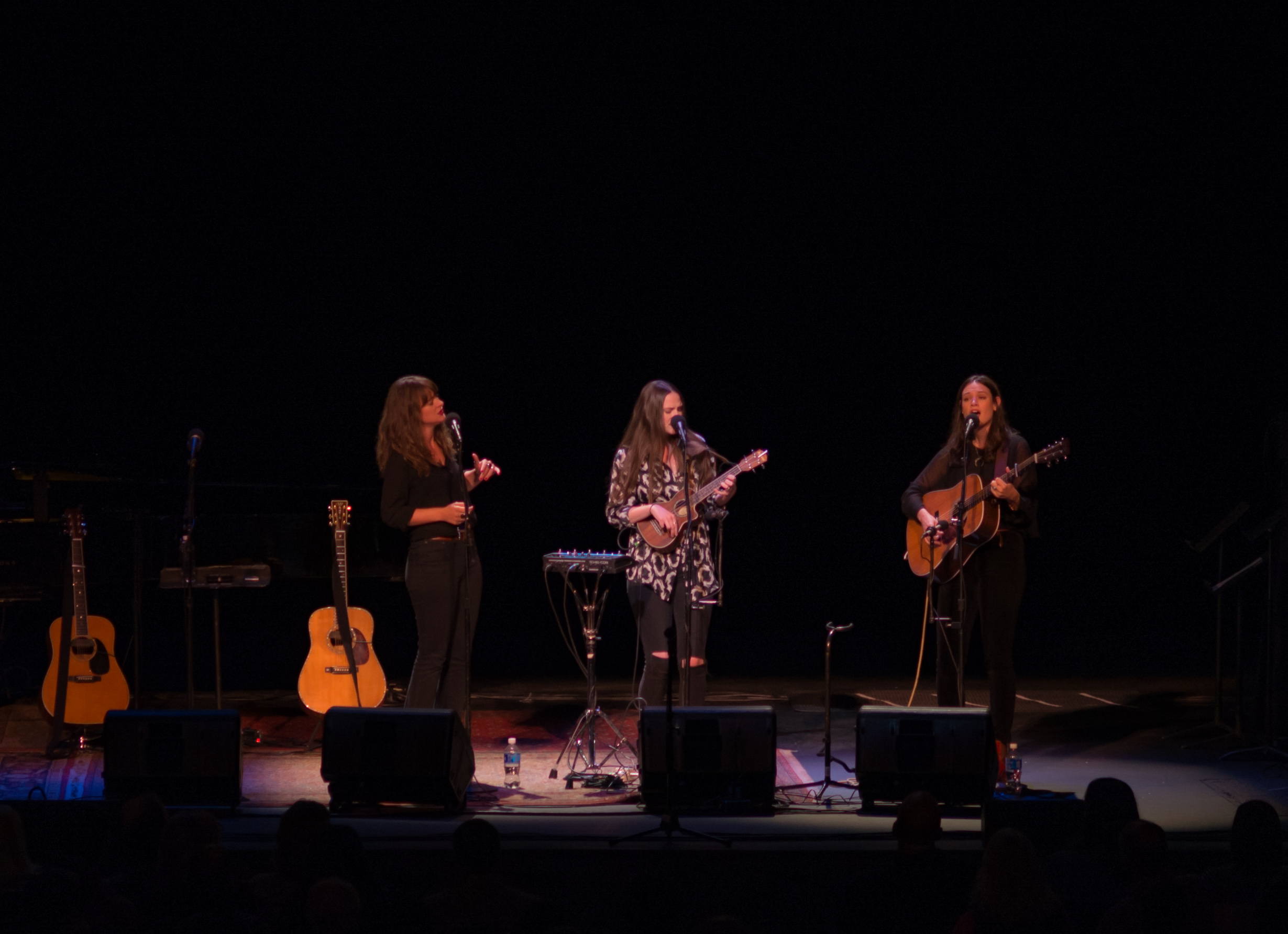 Trey Anastasio was  greeted on stage with a roaring applause, as the legendary guitar player went back to his Vermont roots and played on an acoustic guitar the whole night. There were covers of his own songs with Phish, like “Back on the Train” and “Miss You” from their latest studio album Big Boat. Notably, a song called “Water in the Sky” was performed by Anastasio and the house band, where Thile mentioned that Anastasio actually performed a “perfect country song.” Anastasio stated the song sounded best because of A Prairie Home Companion’s house band, and I totally agreed. Watching the talent of both Thile and Anastasio playing mandolin and acoustic guitar together was incredibly powerful. You could tell both artists were thrilled to be playing with one another as one point in the program, they faced directly at each other and slayed a mandolin-guitar solo. Later, Anastasio came back out to perform a Leon Russell tribute cover of his track “Prince of Peace” and was greeted with a warm welcome by the crowd. 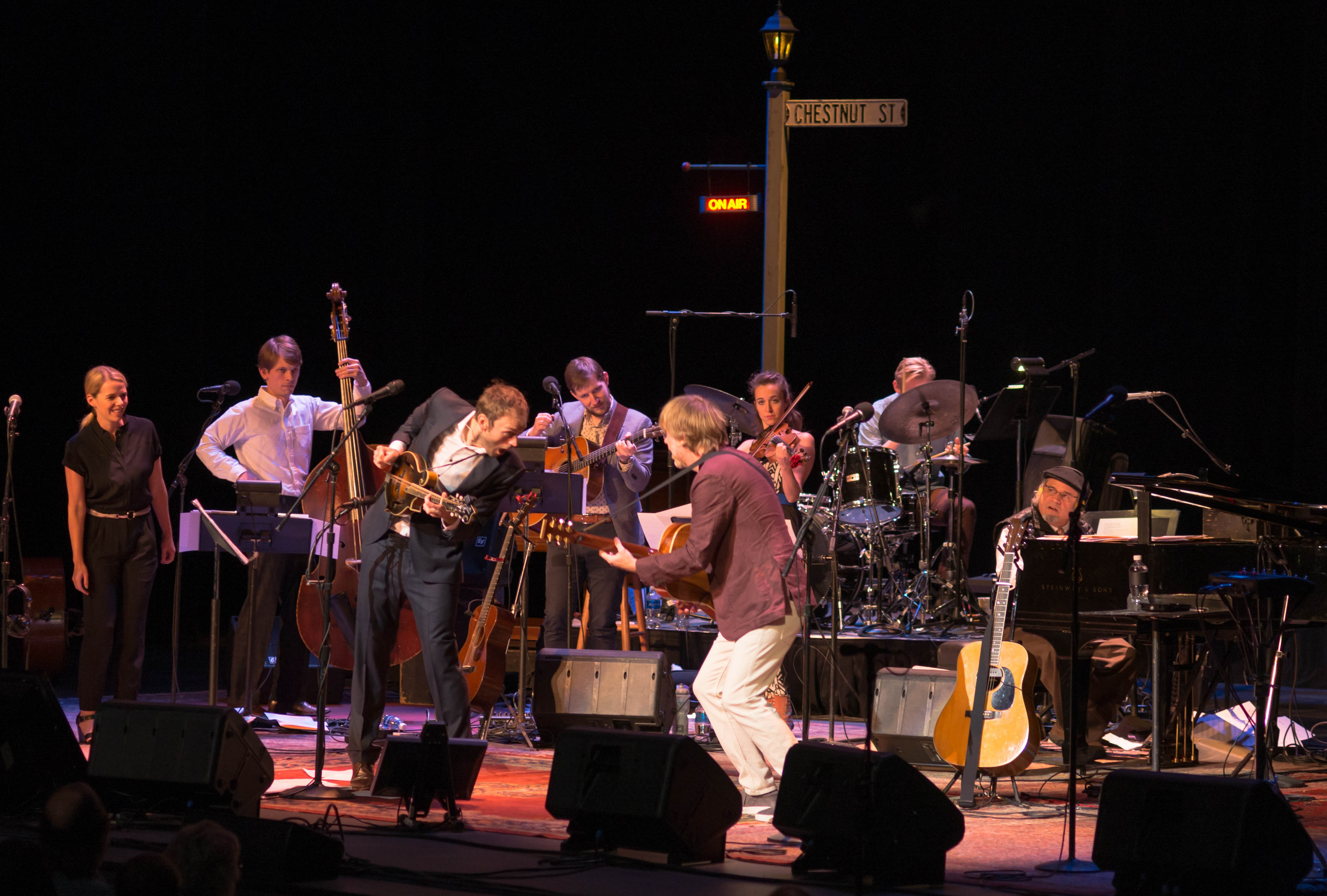 Before Anastasio performed “Prince of Peace,” Tig Notaro came on stage for her stand-up. With her voice never showing any expression, this existential and hilarious comedian had the opera house in a fit of laughter with her truly relatable stand-up sketch. She mentioned the troubles of working a temp job, one I personally related with, as well as some remarks that made fun of the 303, like experiences at DIA.

This was a theme for most of the comedic sketches throughout the night, which I thought made the show more relatable for the live audience by making Denver the butt of a lot of jokes. For example, a skit included a fictional story about an iPhone’s Siri that had different personalities. One of the personalities was the “Denver stoner,” where instead of directing you to the closest gas station, stoner Siri brought you to his friend’s house and asked if his dog could ride in the back of the car. Making Denver a focal point for a lot of the sketches allowed for the audience to be engaged. 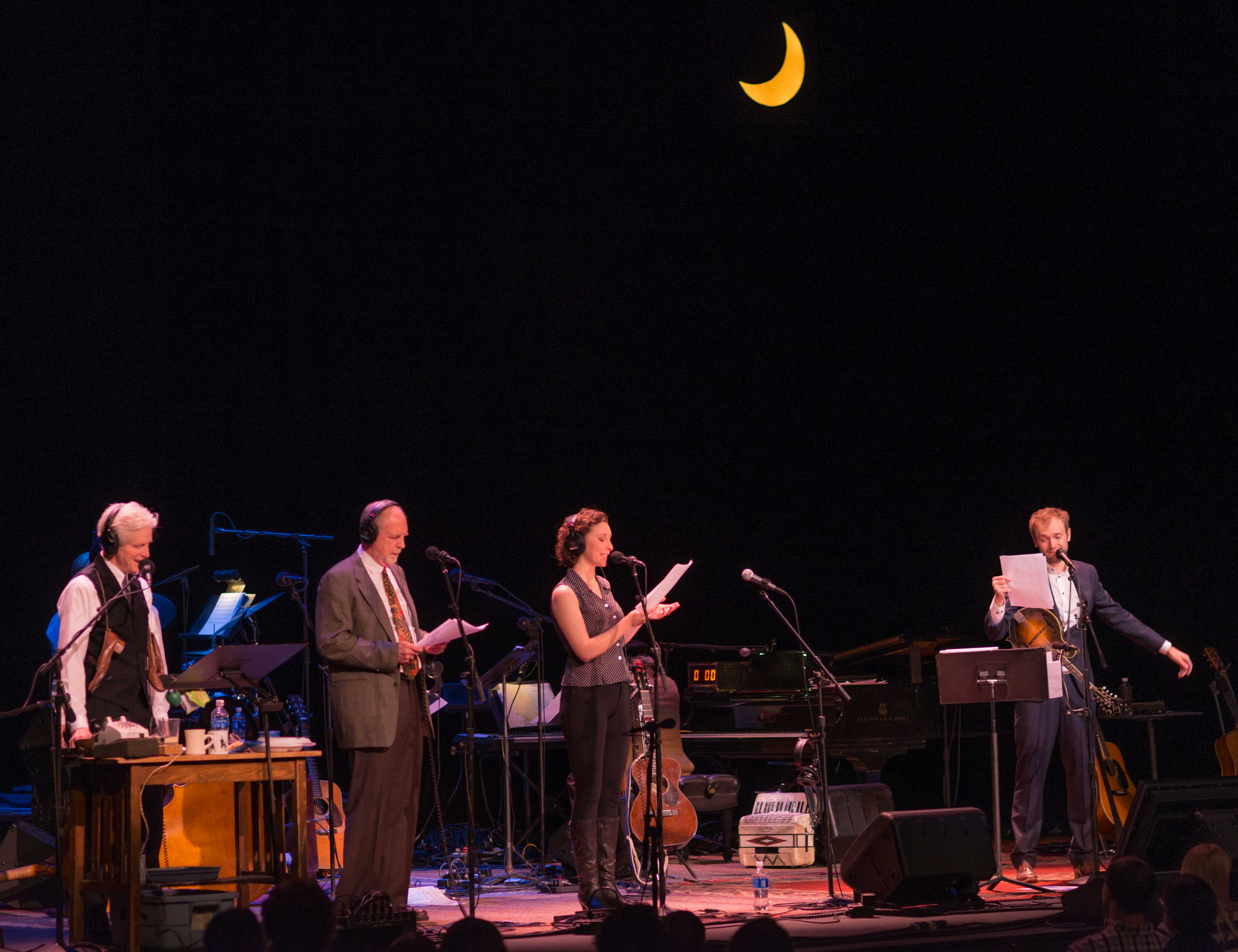 Another memorable part of the show was the sound production. The sound effects throughout the show was an extension of the long-running tradition for the program. Effects were performed live by an individual that would grab chips, wrappers and a variety of random voice impersonations that allowed the performance to be original. I couldn’t believe how good it sounded when eating chips and crunching up a chip bag could mirror  a staticky transmission coming from space.

Reflecting back on the show, when I wasn’t in either a constant stage of laughter or in awe from the incredible talent of the musicians, I think about how successful this program was in engaging audiences around the country. Talent and tradition definitely shined through the program, as this 42-year old radio broadcast continues to touch the heart and funny bone of listeners weekly.