Review – Of Montreal is Theater Incarnate

The Bluebird Theater’s history as a dirty movie theater perfectly qualified it to host cult classic Of Montreal on October 17, 2016. The line gathered at the entrance was one of bight colors, satanic symbolism and cross dressers with immaculate neon wigs. The vibe was comfortable and there was a fever of anticipation as the lights dimmed and openers TEEN came on the stage. The all-girl band was in chic ’80s outfits and the lead singer, Kristina “Teeny” Lieberson, evoked Penny Pretty’s (from Buckaroo Banzai) alter ego.

The women of TEEN had cherry picked the alt-’80s musical styles that worked and generated a sound that was modern and sleek. The band was comprised of the three Lieberson sisters, “Teeny” on guitar/lead vocals, Katherine on drums, Lizzie on Keyboards and Boshra AlSaadi complimenting the family act on the bass. The final product was dance-able and they were a true pleasure to watch. “Teeny” Lieberson owned the stage, covering space and laying down, dazzling the crowd and creating the perfect energy and hype in the audience. TEEN reflected a time passed and left me craving the ’80s and grateful for the modern age in equal measure. 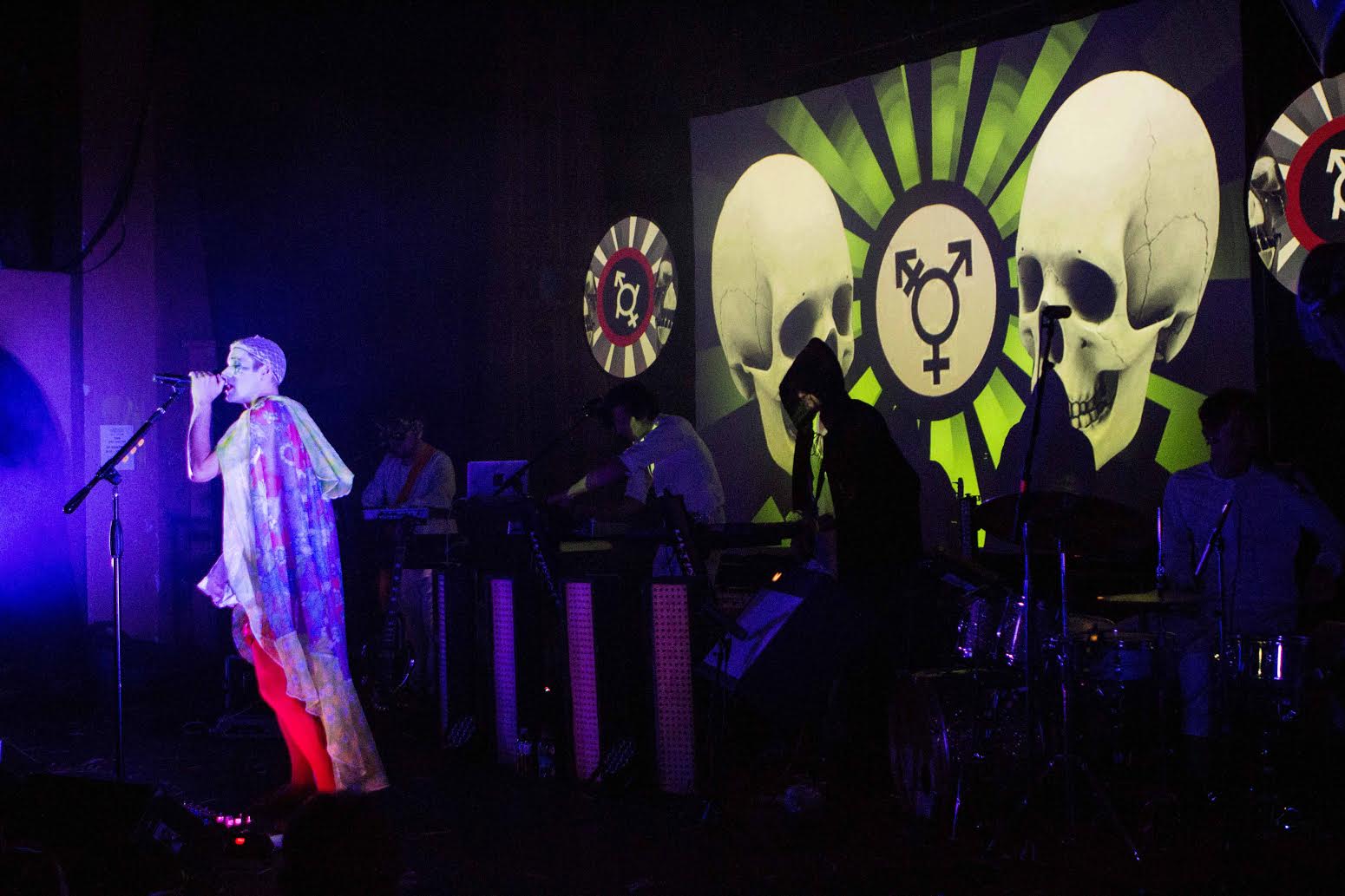 The lights dimmed again and the Of Montreal band members took to the stage in black hooded cloaks and poised themselves eerily over their instruments beneath the massive projection screen adorned on the back of the stage. To great fanfare, lead singer Kevin Barnes, who performs as his newest alter ego Min Riches, entered the stage in his own cape, oozing smoke. 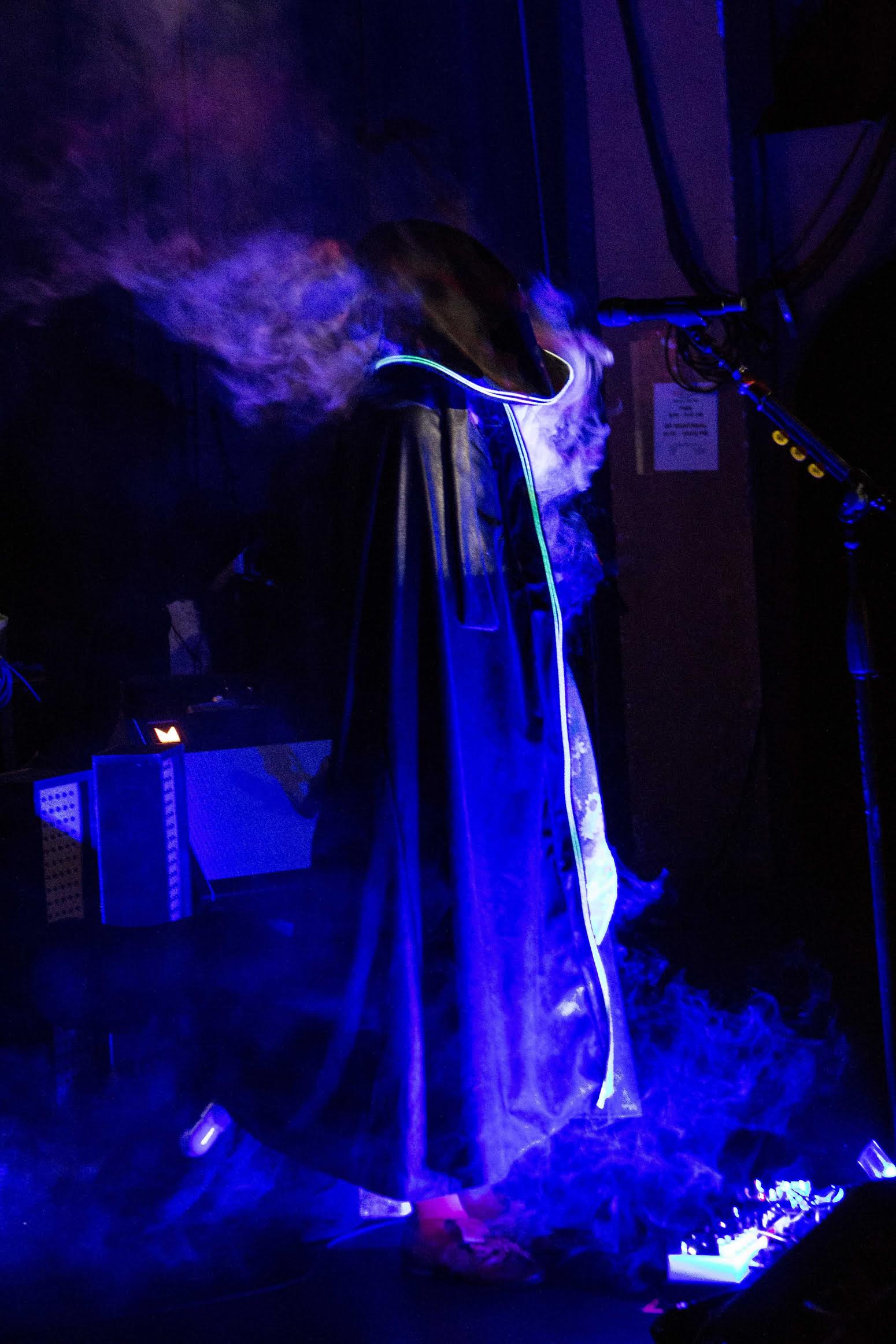 There was screaming and cheers from the packed venue, but the band allowed one moment of silence before everything was set ablaze in a creative, over-stimulating dreamscape. The music began hard and the band members threw their black cloaks to the ground to reveal white ensembles that made them look like sailors. The screen was set aglow with psychedelic visuals and images of hairless cats. Min Riches crooned into the microphone removing his own hood to reveal a beautiful beaded cap and over-the-top makeup. 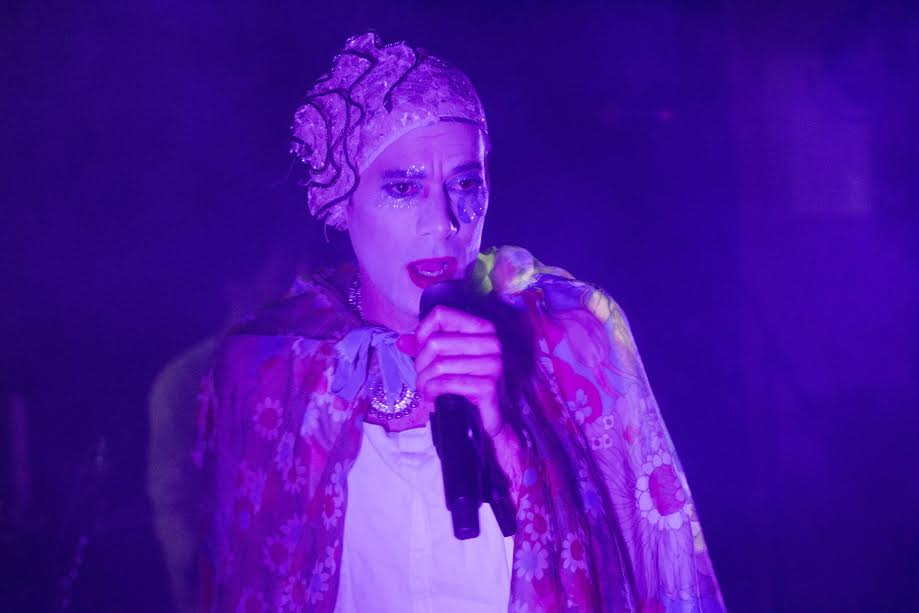 Riches was soon joined on stage by dancers in ’60s matte blue and green skin-tight one-pieces with cartoonish nipples adorning the front, and full synthetic masks of eerie women’s faces with fake hair curled out. Riches was captivating in a frilly apron over a mini-skirt and boots, and he sang jovially. His songs were stories and scores of entire periods of a person’s life and the journey to find one’s self. The combination of exquisite lyrical content, a myriad of songs spanning 20 years and multiple music genres grouped under experimental pop gave life to the visuals of women’s body parts, cats, technicolor shapes and satanic symbols. They had several costume changes and four accompanying dancers that never revealed their faces. It was overwhelming and induced a trance. 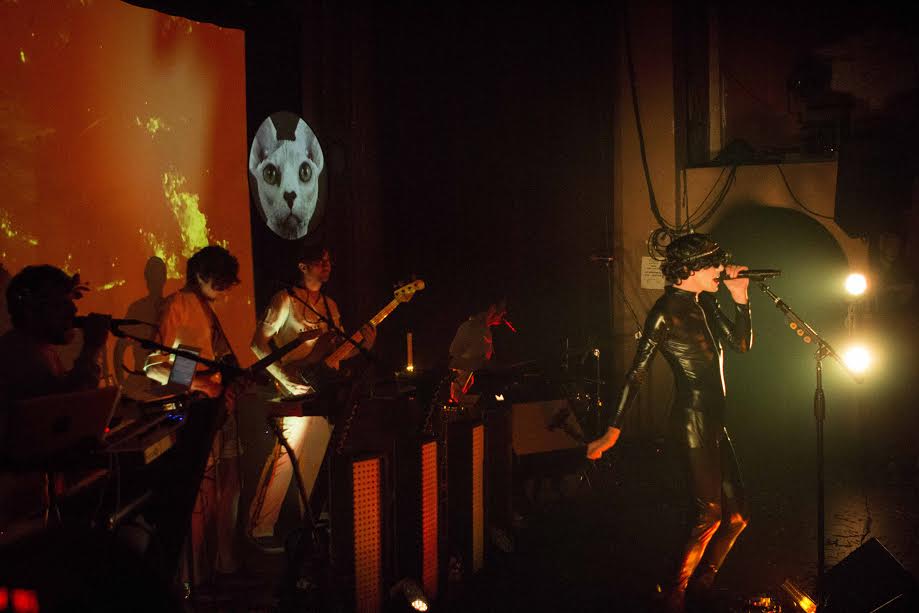 From most of the audience, there was frantic dancing and cheering, but if you looked around the room, you would often see some people simply frozen, staring at the show and trying to process what was at once nonsense and pure everything. Of Montreal is not a band, Kevin Barnes aka Georgie Fruit aka Min Riches is not a person; Of Montreal was an experience and Min Riches was a guide who took us by the hand and led us through his gorgeous and addled perception of life. The show was painless, sans angst, and had the creative agency now lost from live performance. This was all squished into a pop repertoire with influences of disco, jazz, punk, kindercore, glam rock, progressive and EDM. 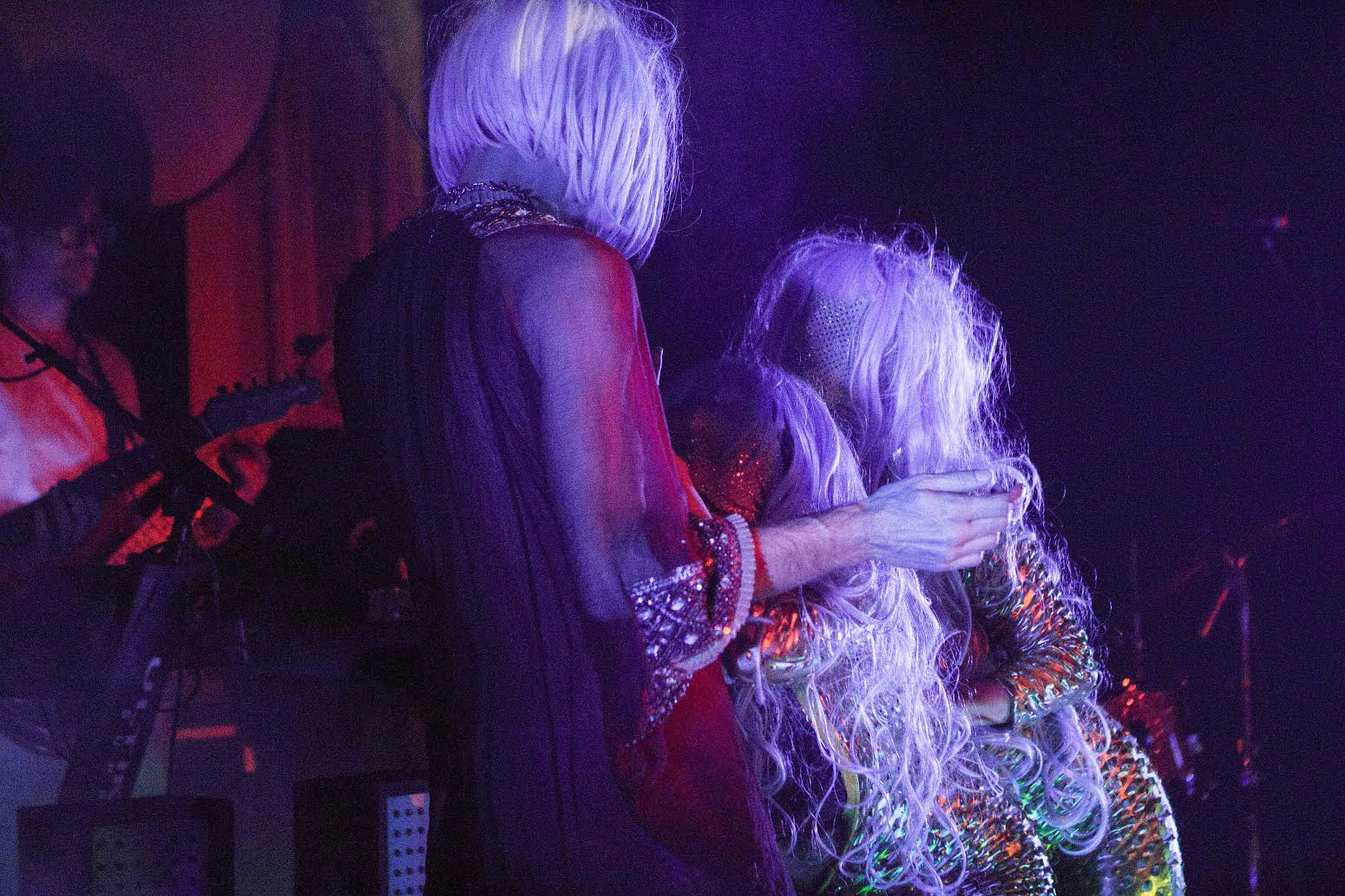 The theatrics’ most lucid moment came in the form of a backup dancer in an inflatable penis costume with a Donald Trump mask coming on stage and shooting feathers at the crowd while the two female dancers chased him in police outfits. After phallic Trump was bested and pushed off stage the police stripped off their own clothes to reveal disturbing skin-tight one-pieces with the full muscular system printed on them. Then came explosions, old footage of police and riots flashing crazily on the back screen. 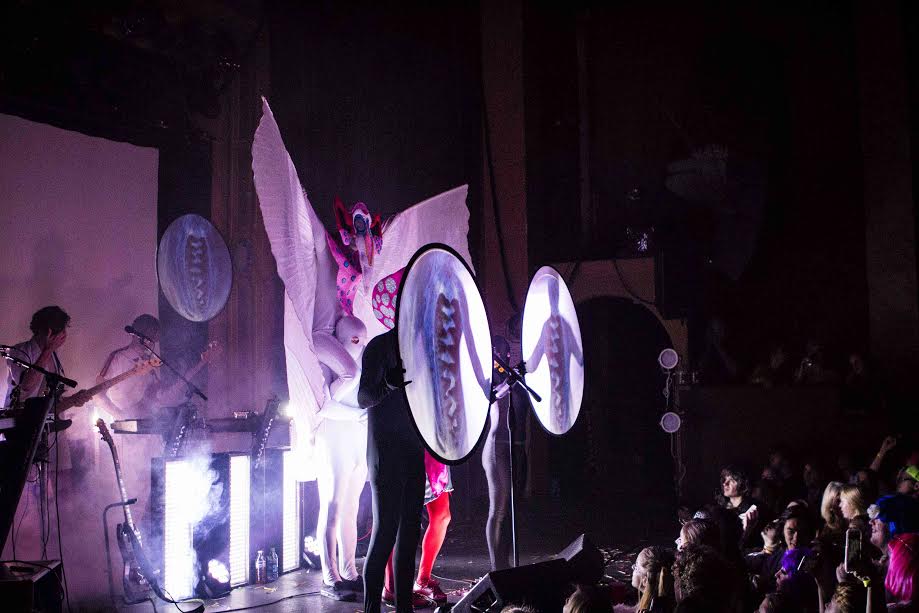 Conversely, there was the moment when Riches reappeared after a costume change in an outfit that could only be described as little red riding hood, but the hood was clearly a vagina with huge white ruffles ensconcing his face. Two dancers in skin-tight white outfits with fully-covered faces brought out what appears to be reflective discs that photographers use to control flash and faced them at the audience on either side of Riches. Suddenly, images of vaginas were flashed at a rapid pace onto the reflective screens: vaginas with teeth; food that looked like a vagina and healthy, normal vaginas. Earlier in the show, while Riches was changing, a two-person costume appearing to be a mole ran onto the stage with huge, glass eyes mechanically blinking at every side of the stage. 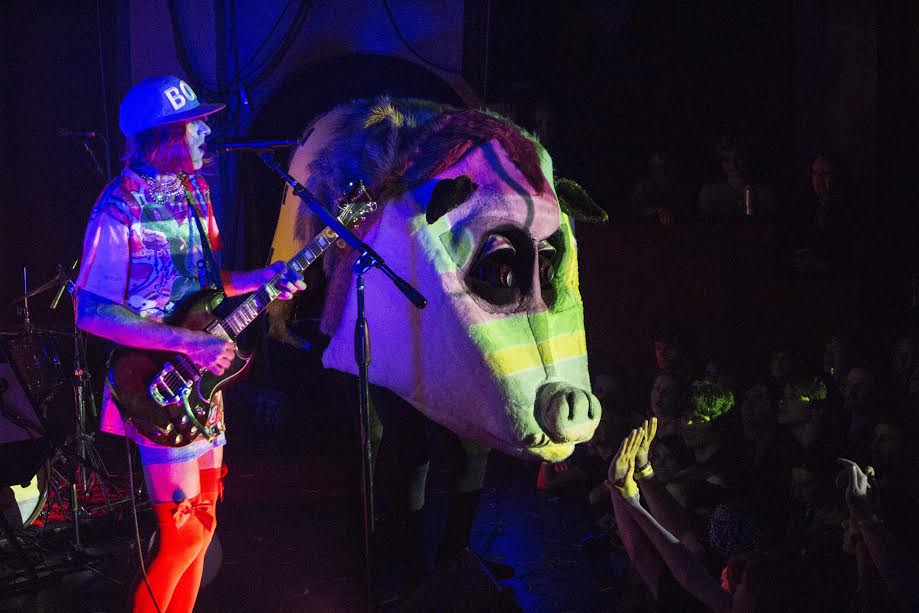 The show ended before I was done riding the artistic buzz. Upon the frenzied request of the audience the band came back for their encore. Fruit smiled coyly in his final costume, thigh-high socks with bows, a Tokyo-chic tee-shirt that was bright pink and a wide-billed baseball hat that said boy on the top, and girl on the bottom part of the bill. To the shock, surprise and eventual enjoyment of the audience, Fruit launched into a mashup of a Prince song and a Bowie song. The crowd went wild singing along; this was much easier to sing along to than the verbose original material we had previously been enjoying. The show closed with all the dancers and the women from TEEN coming onto the stage in crazy masks dancing energetically. 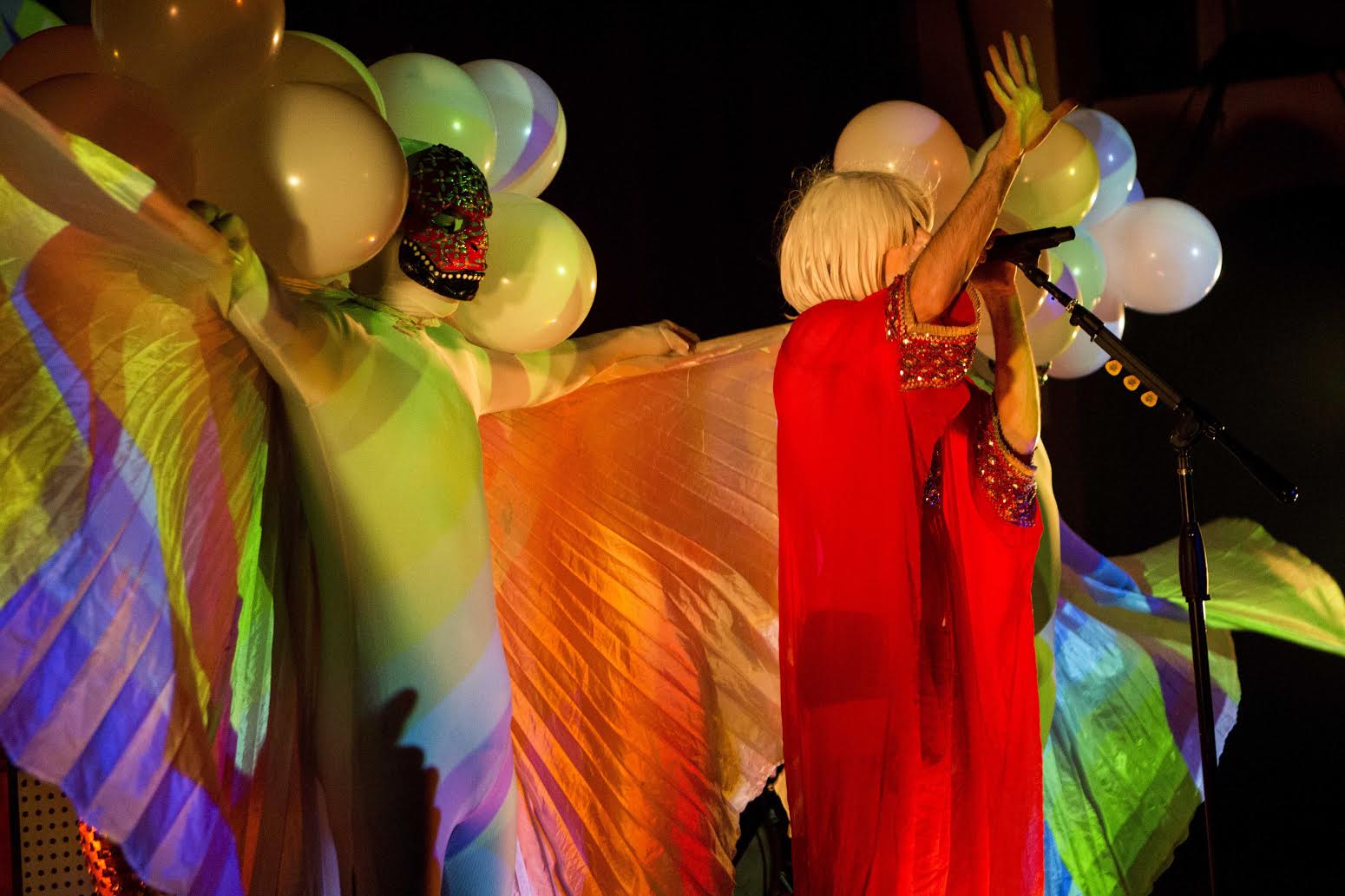 Mark your calendar and put your life on hold for the next time Of Montreal comes to town. No bucket list would be complete without the experience that Of Montreal layers into you.

All photography by Kenneth D Coles. Check out our full gallery here.

[UPDATE October 21 at 11:01 am to reflect inaccurate song titles and references to Min Riches]