Review – Frankenstein, A New Approach to the Classic

The house lights go dark inside of the packed Stage Theater at The Denver Center for the Performing Arts‘ (DCPA) production of Frankenstein, written by Nick Dear and directed by Sam Buntrock, but no curtain rises. Instead, a giant wooden crate, projected on which are the images of body parts, is raised from center stage to reveal a mostly naked creature writhing in pain and despair. No bolts adorn the Creature’s neck. No bits of grotesquely stitched together flesh compile the human form of the iconic and misunderstood character that is the result of Victor Frankenstein’s miraculous abomination. 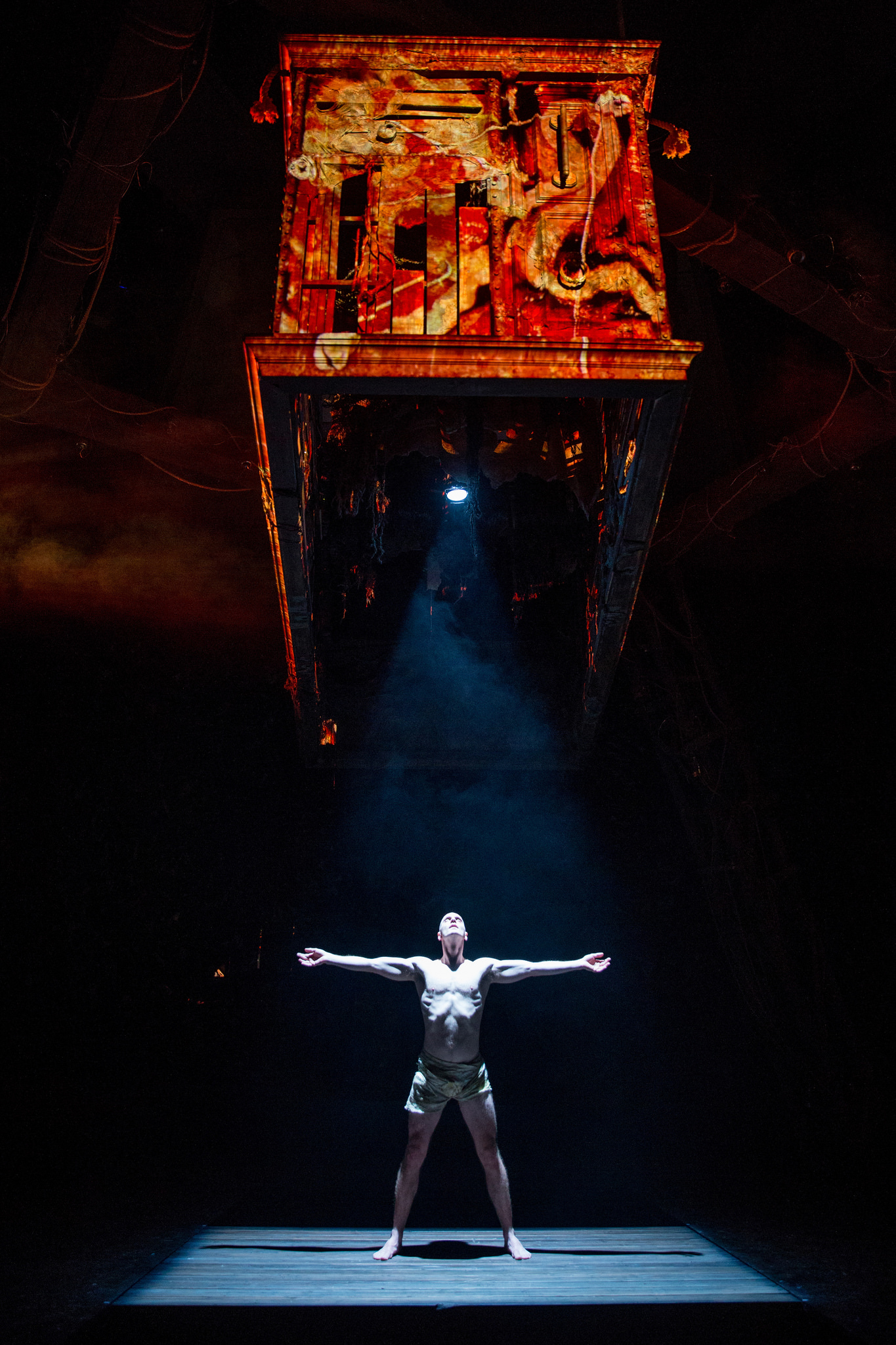 Mark Junek as the Creature in DCPA’s production of Frankenstein. Photo courtesy of DCPA and AdamsVisCom.

Based on Mary Shelley’s novel set in 1818, the new cinematic-like production of the story of Frankenstein and his Creature uses automated, elevator-operated scene changes and atmospheric effects, pulling the audience into the story and increasing the momentum, speeding through a one hour and 50 minute emotionally-driven spectacle.

The innovative scene design by Jason Sherwood combined with the lighting talents of Brian Tovar set the tone for a dark and brooding Frankenstein that is sure to keep audiences enthralled and on the edge of their seats. The use of projections throughout the production, designed by Topher Blair and Charlie Miller, brings this period piece right into the modern age. And Kevin Copenhaver‘s intricately-designed costumes ground the play to its classical roots while still invoking a sense of unique style and inventive detail.

Altogether, DCPA is offering up a new take on Shelley’s classic novel, running September 30 through October 30. Audiences will have the opportunity to see Frankenstein’s Creature in a whole new light.

In fact, Victor Frankenstein’s story of ambition at the expense of total destruction takes a backseat to the story of his Creature in the new incarnation. The audience is introduced to Frankenstein’s Creature as though witnessing the birth of an unwanted child. Drawn by the Creature’s cries, Victor Frankenstein enters the chamber only to immediately reject the existence of what he has created. With the slam of the chamber door, Frankenstein abandons his creation as though he were god, leaving the Creature’s Adam-like form in infantile isolation. 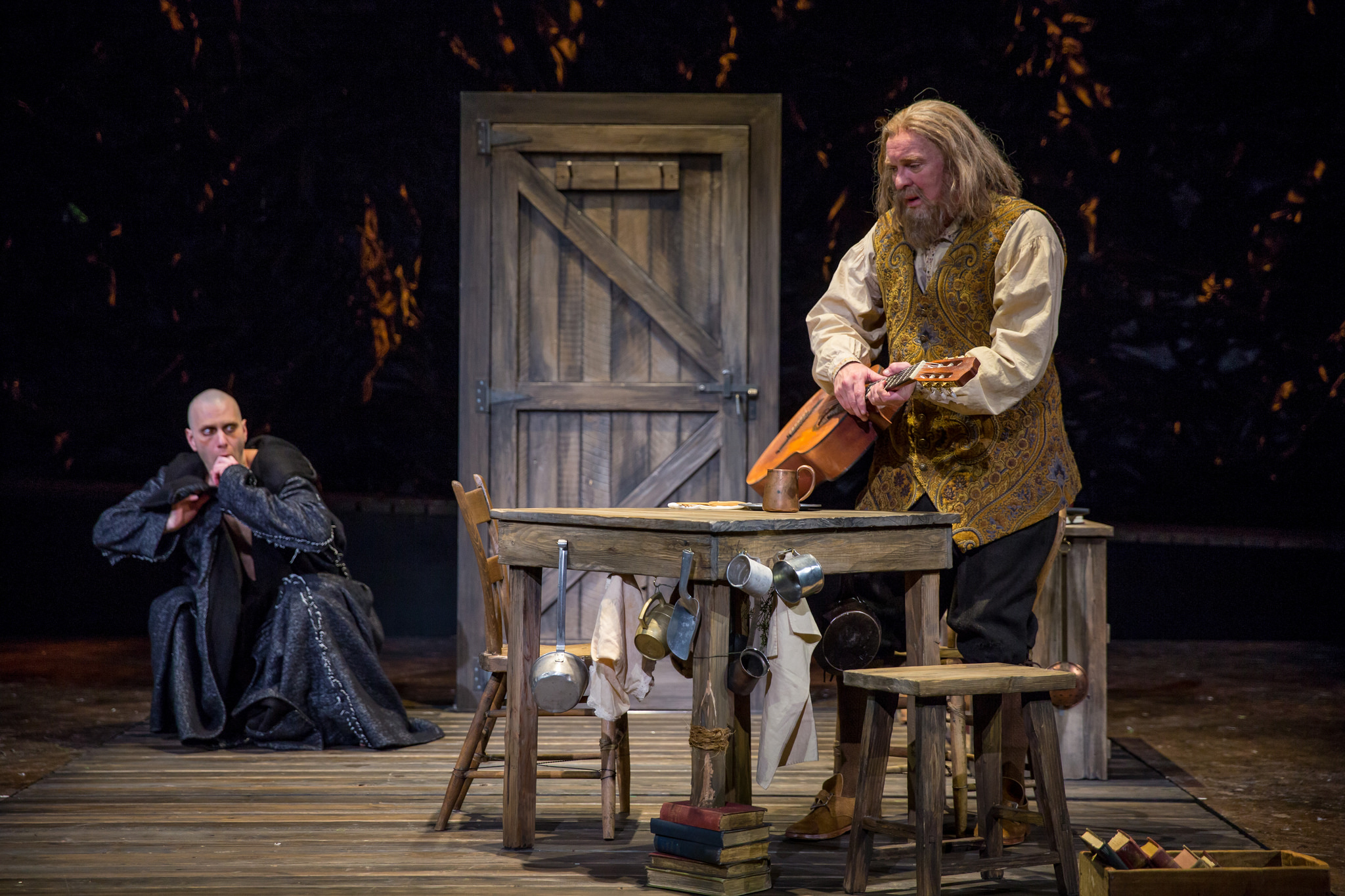 The Creature, Mark Junek, is accepted and educated by De Lacey, Kevin McGuire. Photo courtesy of DCPA and AdamsVisCom.

From the beginning, the Creature is an infant in the world without the capability to understand the often violent rejection he faces from society. The audience watches, as though a parent would a child, as this forlorn being, born of hideous circumstances, delights in the ability of fire to bring light to the darkness, only to wince as he is burned in his curiosity. This scene illuminates the duality of the Creature and Frankenstein, mirroring Frankenstein’s own realization that his well-intentioned discovery ultimately leads to his downfall. This duality is a repetitive theme in their story which allows Mark Junek and Sullivan Jones to alternate playing both Frankenstein and the Creature on various show dates.

The Creature is no mute Boris Karloff, but a child-like man who meticulously learns to speak, read and write with the help of a blind peasant named De Lacey, played by Kevin McGuire. De Lacey does not reject the Creature, but becomes a father figure who spends every scene endowing the Creature with a sense of humanity. So much so that one forgets that Frankenstein is a tragic story and what slight hope one holds for the Creature is sure to be dashed, as his fate is inevitably intertwined with destruction. 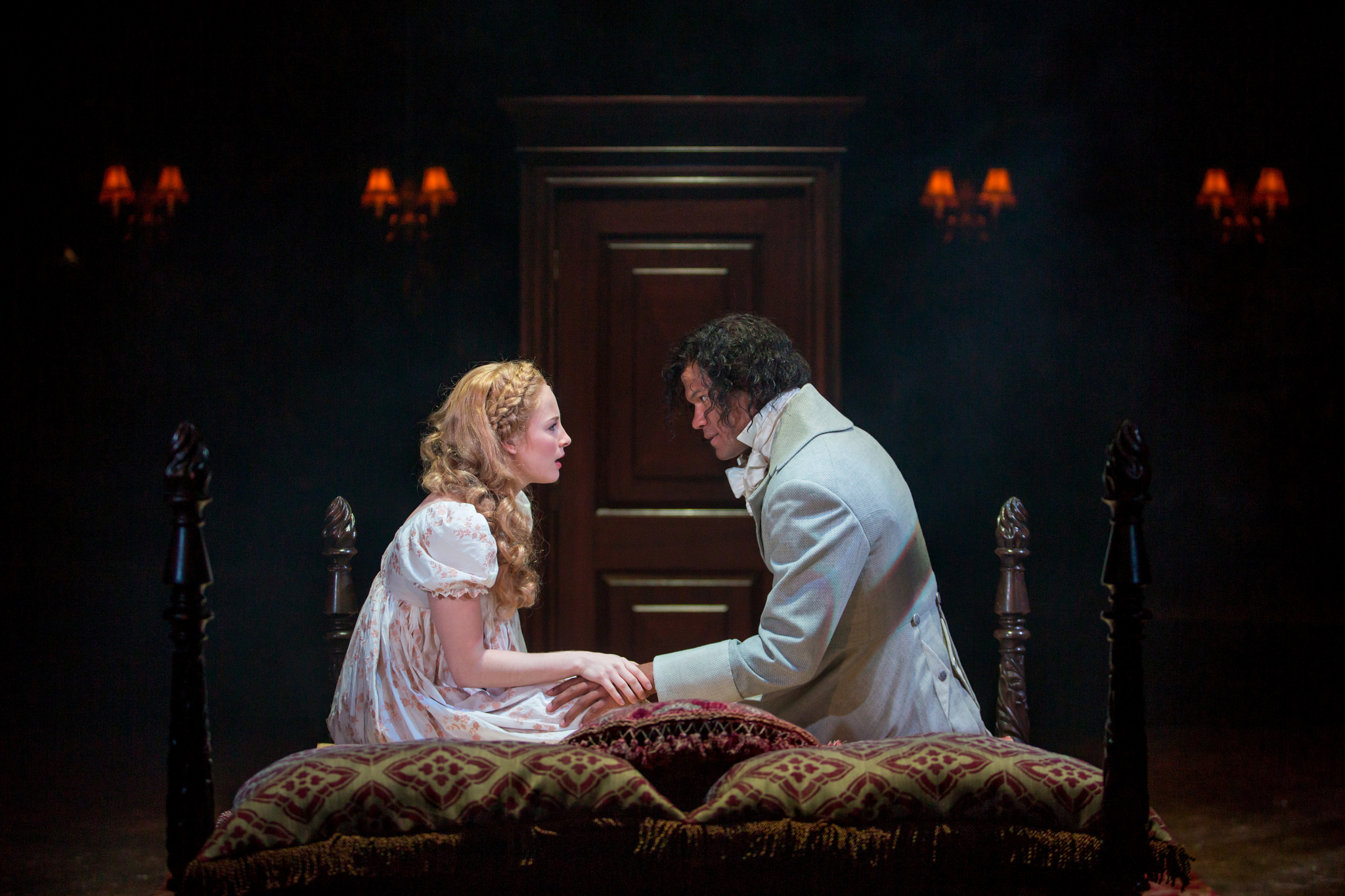 Elizabeth, Jenny Leona and Frankenstein, Sullivan Jones in their bedchamber. Photo courtesy of DCPA and AdamsVisCom.

Throughout the play, we are given glimpses into the inherent innocence of the Creature set against the brutal rejection and revulsion with which he is met, resulting in the corruption of that innocence in retaliation. In stark contrast, Frankenstein is coddled by his father and doted on by his compassionate betrothed Elizabeth, played by Jenny Leona. But Frankenstein is selfishly driven by his own ambition, so much that even the heart-wrenching death of his brother, William, played by Charlie Korman, is but a footnote in his pursuits, whereas, William’s demise at the hands of the Creature, in a kind of dance with death, marks the loss of that innocence and the beginning of the Creature’s struggle to find redemption in love.

“Hatred. Nothingness. Despair. I am finished, but you give me purpose. You must be destroyed,” Frankenstein cries into the snow-filled night. 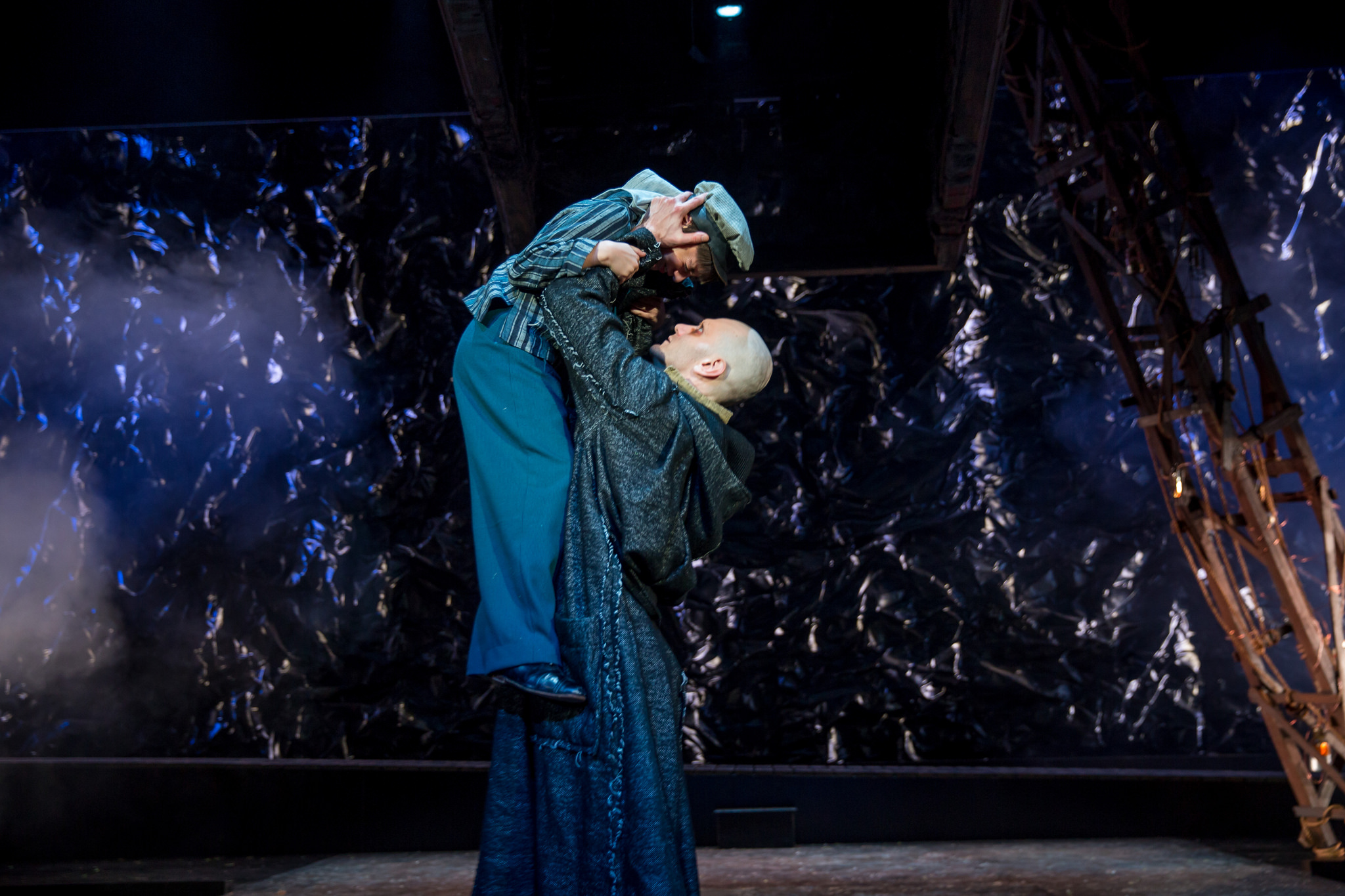 Death dances with innocence. Mark Junek as the Creature and Charlie Korman as William Frankenstein. Photo courtesy of DCPA and AdamsVisCom.

The two are once again thrust together as they embark on a dark path seeking, salvation for their individual sins when the Creature convinces Frankenstein to bring to life a female counterpart for himself. Fueled by the desire to perfect his scientific process and eradicate his earlier failing, Frankenstein maniacally begins the construction of the bride. Perfection is within his grasp as the bride, played by Nellesa Walthour, is unveiled. Yet, he is haunted by the notion that though this new creation is far superior to his first, he ultimately has no control over what she will come to be. 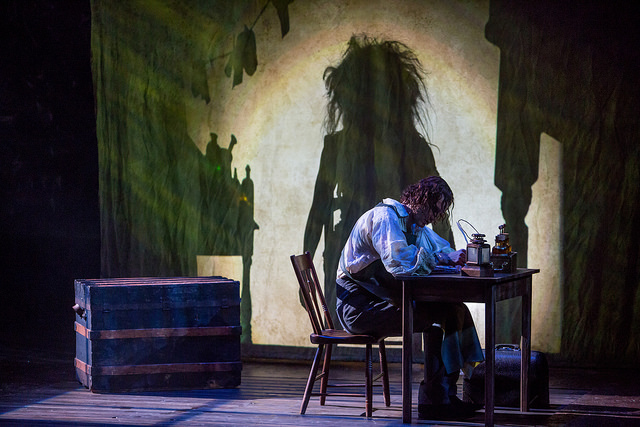 Creating the bride. Sullivan Jones as Frankenstein and Nellesa Walthour as the bride. Photo courtesy of DCPA and AdamsVisCom.

What happens next for the characters of Frankenstein is gut-wrenching and left the audience gasping in their seats. The DCPA’s remake is ultimately a moving production as much for its tragedy as for its humanity. It begs the question: who is the real monster? Is it Frankenstein, driven by his pursuit of scientific enlightenment at all costs? Or the Creature, suffered to endure rejection at every turn, resulting in a thirst for vengeance? The answer is left dangling in the wind as both Frankenstein and his Creature exit the stage, leaving the audience wanting more.

The Denver Center of Performing Arts is located on 14th Street between Curtis and Champa. Frankenstein runs now through October 30. You can purchase your tickets here.