Kevin Copenhaver is entering his 26th season as the costume crafts director and resident costume designer for the Denver Center for the Performing Arts (DCPA). Copenhaver has come a long way from the little boy in Ohio who played dress-up in borrowed gloves from his mother to go along with capes she sewed for him in emulation of his favorite television show, Batman. “I was one of those kids who definitely liked to play dress-up,” Copenhaver said of his youthful forays into costuming.

As a kid, Copenhaver was involved in children’s theater groups, but he never felt at home in the spotlight. “I was cast in shows, but never felt very confident about acting,” he stated. He went on to elaborate, “I always preferred the dress-up part as opposed to the dress-up and talk in front of people aspect.”

Not only did he show an aptitude towards costuming from an early age, but Copenhaver also became an accomplished musician. From sixth grade on, he geared himself toward music, learning oboe, piano and alto-saxophone. He went on to attend the University of Cincinnati College Conservatory of Music with the goal of becoming a concert oboist. “After a year in the Conservatory, I hated it. I just didn’t enjoy playing anymore. It didn’t feel like a right fit for me,” said Copenhaver.

He switched majors, directing himself on the path towards theater and costume design. Along that journey, he found his first mentor, design teacher Barbara Kay, who instilled a passion in him for an old-school approach to design. During Copenhaver’s senior year, Kay was battling cancer.

“We would go to her house and sit by the fire, drink tea and talk design for hours on end. That had a profound effect on me,” reminisced Copenhaver. Before her passing, Kay introduced him to Italian street theater, specifically Commedia dell’arte, which is improvised drama featuring masks. 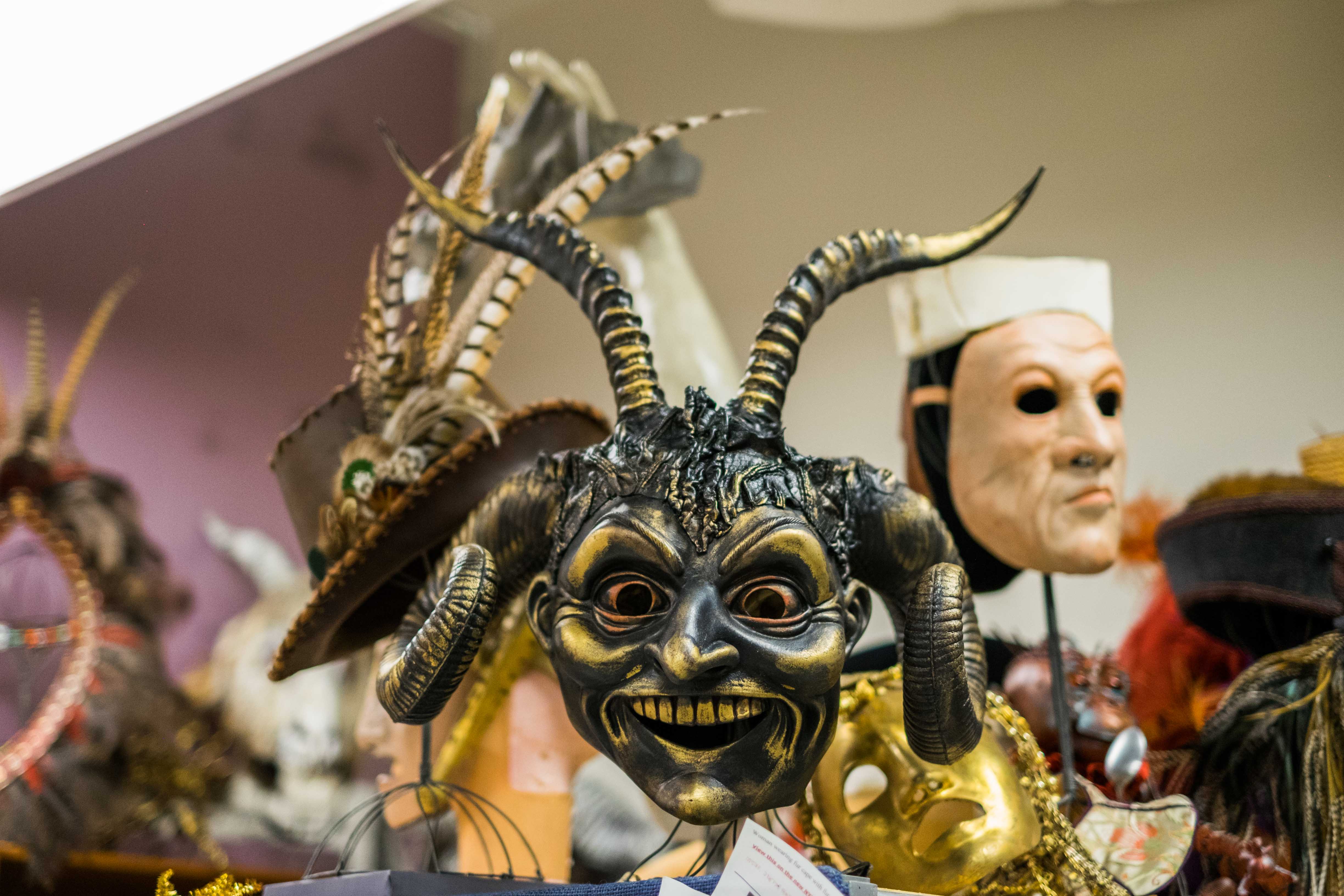 A selections of masks at the DCPA.

The interest in the Italian art of mask-making used in theater would later benefit Copenhaver, as he was given the opportunity to study with Donato Sartori, who resurrected the process of making Commedia dell’arte masks after learning from his father in the 1940s. He spent two months in Italy under Sartori’s tutelage.

“It was grueling. It was really grueling work, but it broadened my horizons,” Copenhaver said. It was his first trip to Europe and brought about a creative awakening. “The mask-making is still the foundation of my passion for theater,” he stated.

Luckily for Denver’s theater scene and the DCPA, Copenhaver found a listing for costume crafts director in a publication once known as Art Search, which published job listings around the country. He submitted his resume and letters of recommendation from well-known designers and was offered the position.

“I went back to Ohio, bought a little pickup truck and loaded all of my stuff into it and then headed West and that’s it. I’ve been here ever since,” Copenhaver said.

In 2000, Copenhaver had the opportunity to delve into the art of mask-making once again for the DCPA’s production of John Barton’s, Tantalus, an epic 10-hour long feature consisting of 10 original Trojan War plays. “I said that time in Italy was grueling, but nothing was grueling like Tantalus,” he stated. He worked closely with Greek designer Dionysis Fotopoulos, who spoke very little English, but with whom Copenhaver developed a collaborative form of communication through design.

The creative team worked around the clock in shifts for over six months in order to produce the hundreds of masks required in Tantalus. Copenhaver had to convince Fotopoulos, a traditionalist, to use new techniques and modern materials in order for the masks to withstand the rigorous tour that would include Denver and England.

“I was making these almost primitive masks, but making them out of carbon fiber and Kevlar,” Copenhaver elaborated. He still has a few of the masks from Tantalus as mementos on his walls. “It was very rewarding, but it was probably the biggest challenge I’ve ever faced, theatrically speaking,” he said.

In the 2004-2005 season, DCPA took on Oedipus Rex, and yet another tragedy befell one of Copenhaver’s mentors, Andrew Yelusich, a resident costume designer who passed away around that time.

“I was designing that show, and again, he was in the process of dying at the time. I was finally getting to do something I’d always wanted to do, design this big Greek play and build the masks for it. But then, the person that I wanted most to see the end result never got to see it,” he stated.

Despite the losses he’s experienced along the way, Copenahver has continued to push boundaries and astound audiences with his talent and craft. Recently, he designed the costumes for the incredibly well-received production of Sweeney Todd, featuring the musical stylings of DeVotchka.

“Ninety-nine percent of it was a blast,” Copenhaver said of his work on Sweeney Todd. He went on to describe the experience further. “My approach to Sweeney — we were definitely setting it in a period — when you say Victorian, that can mean so many different things. It’s just a gigantic span of decades. I was able to push the boundaries in terms of silhouette and, certainly, fabric choices, colors and turn the heat up a couple of notches.”

There’s nothing better than a production like Sweeney Todd to an accomplished costumier whose inspirations include hyper-visual directors such as Guillermo del Toro, Tim Burton and Tarsem Singh.

“For me, getting to make interesting clothes, getting to work with great actors, a lot of blood — it just appeals to the things I enjoy,” Copenhaver said. 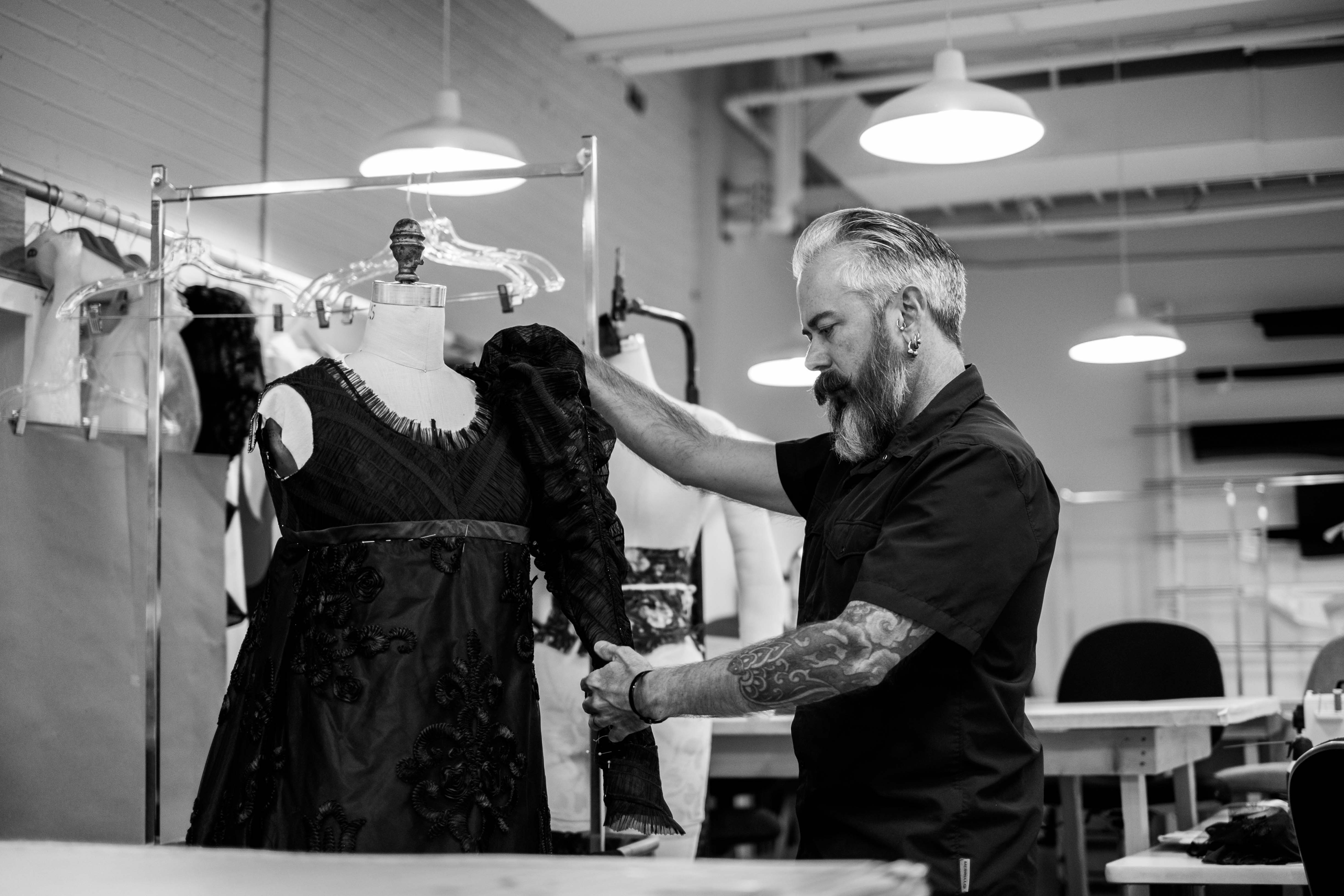 Kevin Copenhaver fits a sleeve to a gown at DCPA. All photos by Noah Berg.

Frankenstein, A Monster Offering of Innovations in Costuming

Next up for Copenhaver is the DCPA’s production of Frankenstein, which will run from September 30 to October 30, 2016. He assured audiences that, “We’re not putting Boris Karloff with a flat head and bolts in his neck onstage.”

Even though Frankenstein is a period piece, Copenhaver isn’t too attached to the year 1818 in which it is set. “It’s storytelling. That’s what I love when doing costumes. I like inventive things. Modern, contemporary pieces don’t interest me very much. They have their place, but as a costume designer, designing something that hasn’t existed before, that’s the real jolt,” he said.

There are two pieces in particular that Copenhaver is looking forward to seeing in the spotlight.

“They both are being worn by the character of Elizabeth, who is Victor Frankenstein’s fiance. Her wedding dress, I’m really looking forward to seeing in the space and the world that the scene designer has created, with the light [by the lighting designer]. I have great hopes for that,” he said.

The second piece that he is excited to see grace the stage is another of Elizabeth’s, “It’s one of those things that, yes, if you were to just see the silhouette, you would just say that’s early 19th century, but it’s one that I feel like I’m pushing a lot more towards a modern sensibility. I’m anxious to see how that will play.”

Denver audiences are also anxiously awaiting the opening of the curtain on Frankenstein as much for the delight of an entertaining story as to see what marvelous creations Copenhaver has stitched up to adorn its cast.

“In my head, I see it one way, but when it all comes together on stage and in light and with actors acting, it’s a whole new thing. There’s a lot of anticipation,” Copenhaver stated.