Block Festival–previously known as Snowboard on the Block– kicked off Friday evening with temperatures in the high 70s.  This year’s event took place at Denver’s Sculpture Park in front of the Denver Center of the Performing Arts (DCPA). The new festival grounds expanded the square footage for the event when compared to last year – allowing for more vendors, more giveaways, a three-story snow ramp, access to multiple bars and an open grassy viewing area fit for thousands. 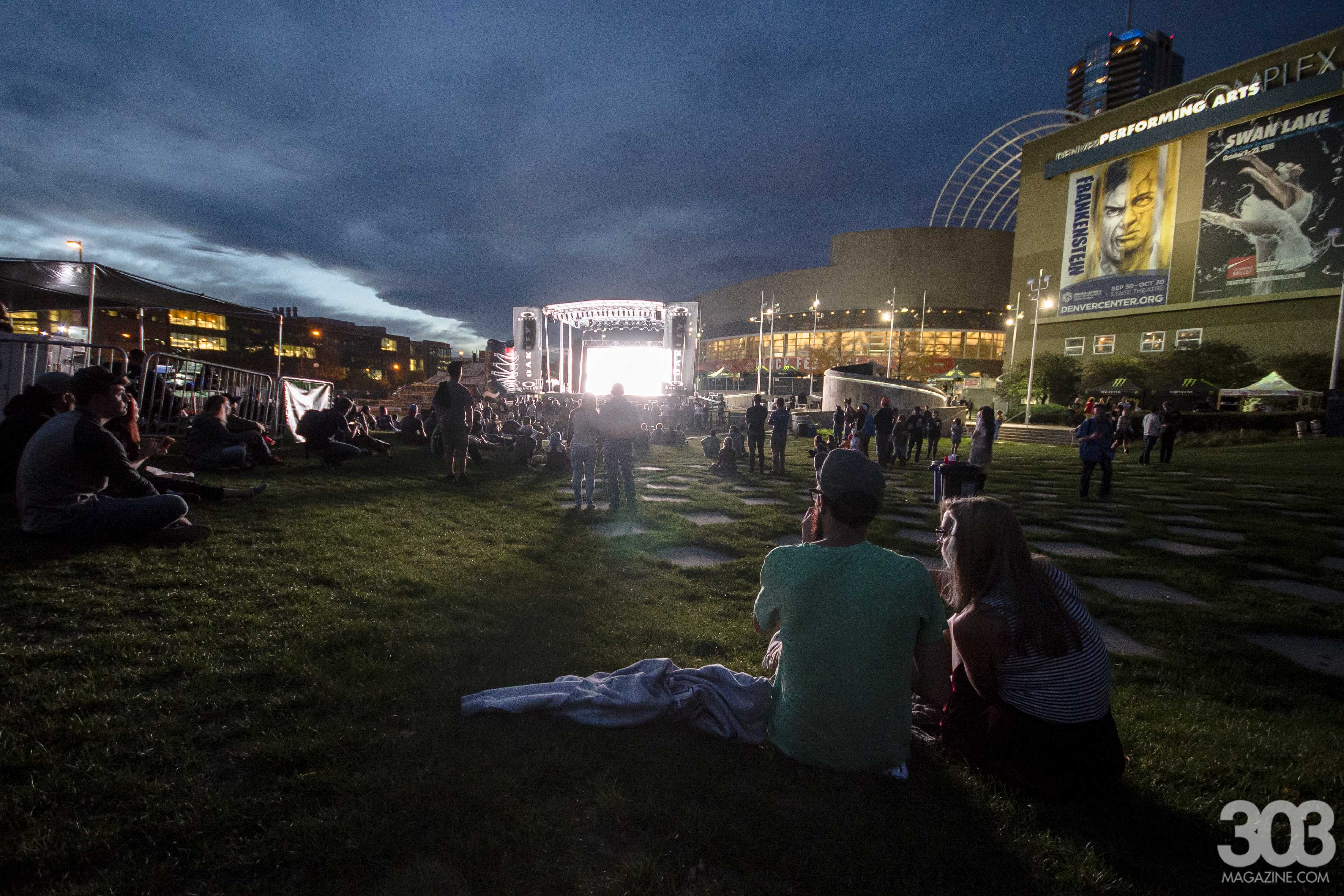 The festival centered around  DCPA’s two towering white sculptures. The south edge  of the venue was lined by food trucks–ticket holders had access to a variety of food ranging from gourmet grilled cheese to Thai food and bratwursts. Dozens of vendors set up shop around the park welcoming snow enthusiasts far and wide to demo and/or purchase top of the line equipment and technology. Vendors included Oakley, Vans, Never Summer, Candygrind, GrassRoots, Union Bindings and many more. Event goers pass time between films by wandering from vendor to vendor collecting knick-knacks and entering in giveaways and contests. The first of 12 feature films – Never Summer’s Twenty Five – came to life on the two-story outdoor screen around 6 p.m. 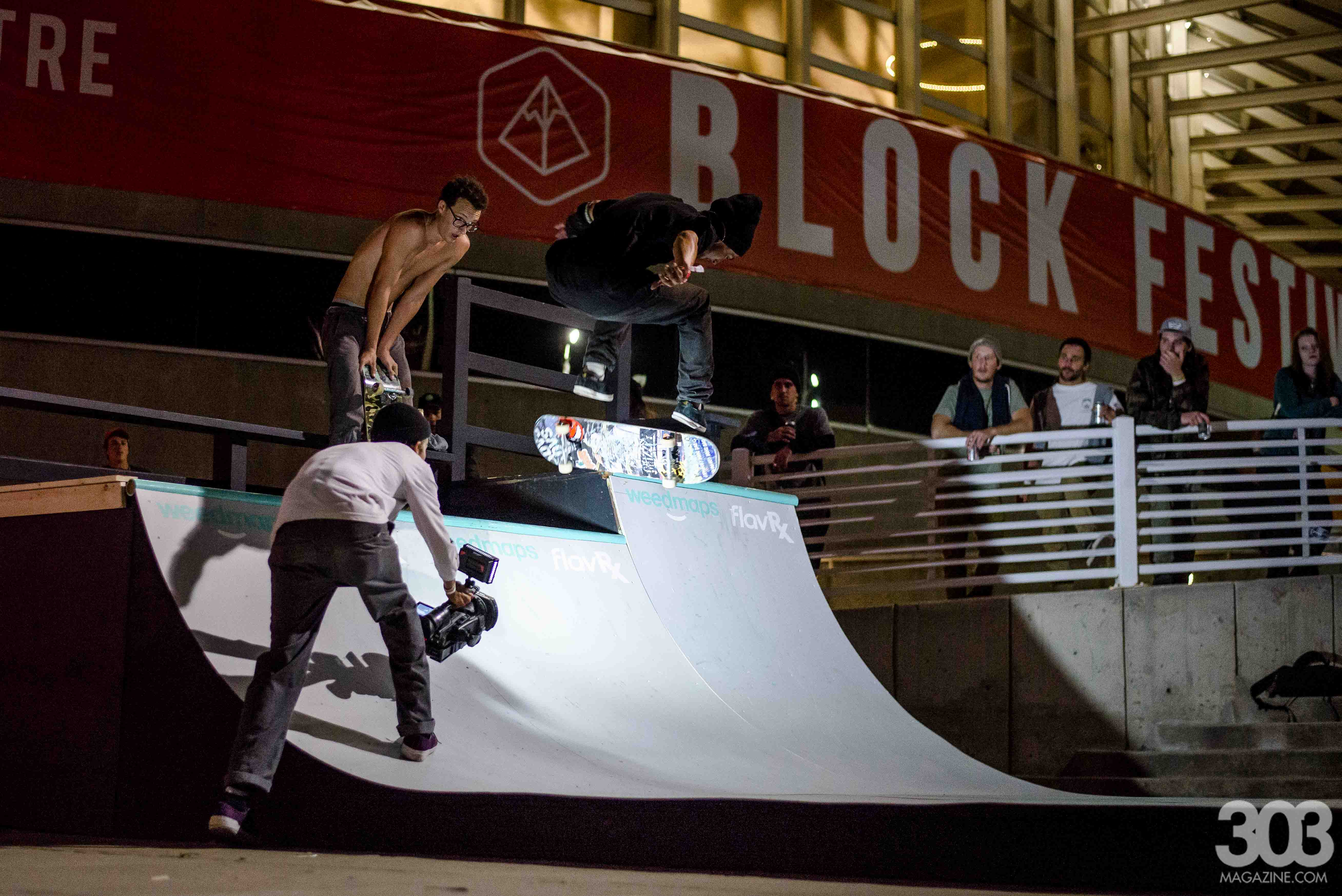 Although no action sport events were scheduled on Friday’s line-up, 303 Magazine was able to spend some time at the mini ramp to catch skateboarders in full motion. The mini ramp is open to the event goers and was filled with dozens of riders from around the nation. Mike Berdis of PA caught our camera with a high flying, evening three-sixty flip. Mike rides for Weedmaps and Spitfire Wheels.

As the sunset dipped west the videos appeared brighter and the crowd thickened. Stage speakers blasted music through the venue late into Friday evening with performances by L.A. super producer  MIMOSA and Chicago hip-hop artist Chief Keef. MIMOSA was first to take the stage at 7 p.m. – playing his trademark mix of upbeat synthesizer, heavy-low bass, and mainstream pop music. The producer mixes lyrics and samples beats from a wide range of artists – giving the crowd both something fresh and something to sing along to. 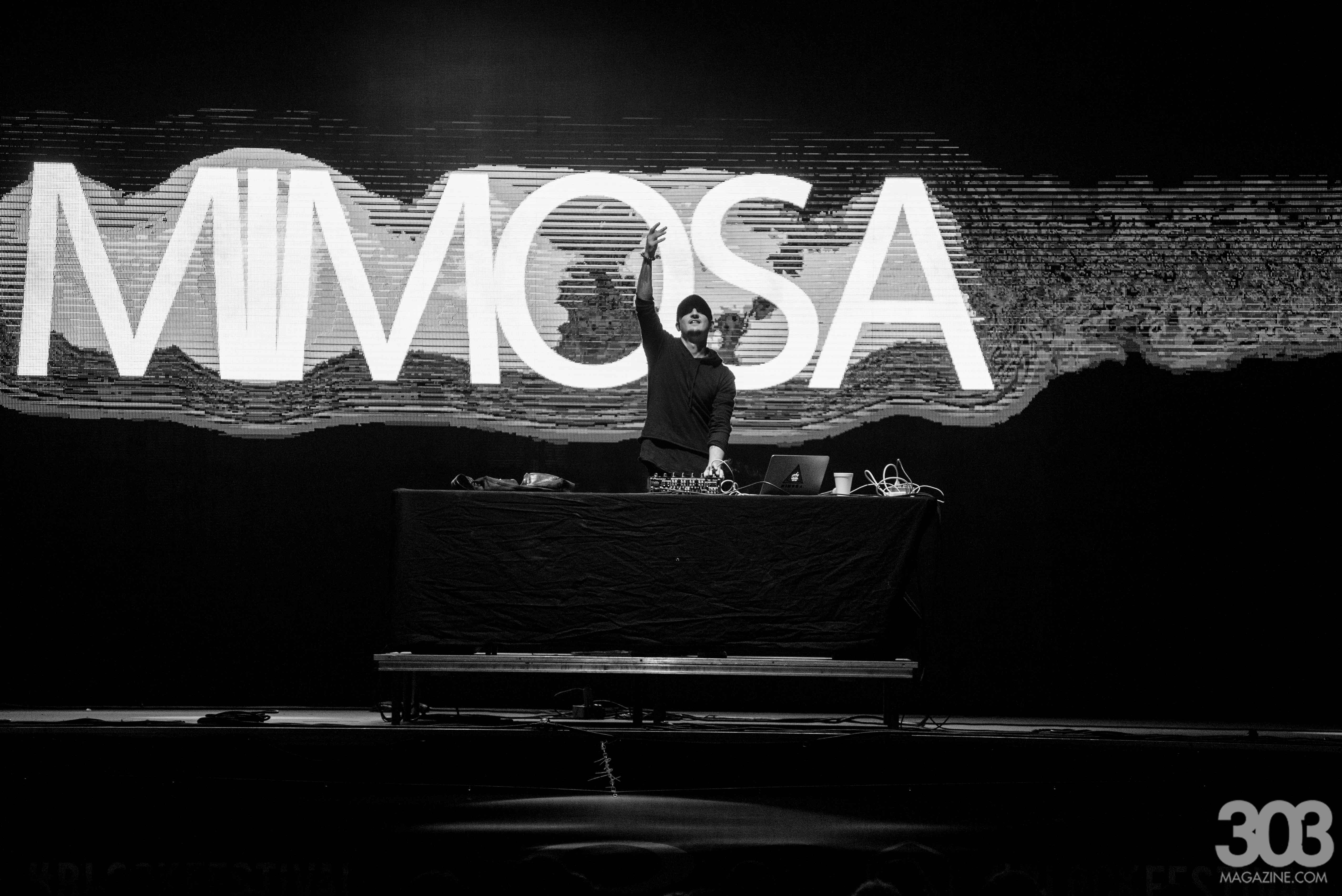 Chief Keef took stage around 9:30 p.m. with a half dozen hype-men. The “gang” of performers made for a high energy, head boppin andfist-pumpingg fan base. Keef and his crew opened with a fan favorite –“3hunna”– sporting colorful Denver Nuggets jerseys and snapback hats. The Chicago rapper further connected with the crowd by extending a thank you to the snowboard community for being inclusive to the genre. 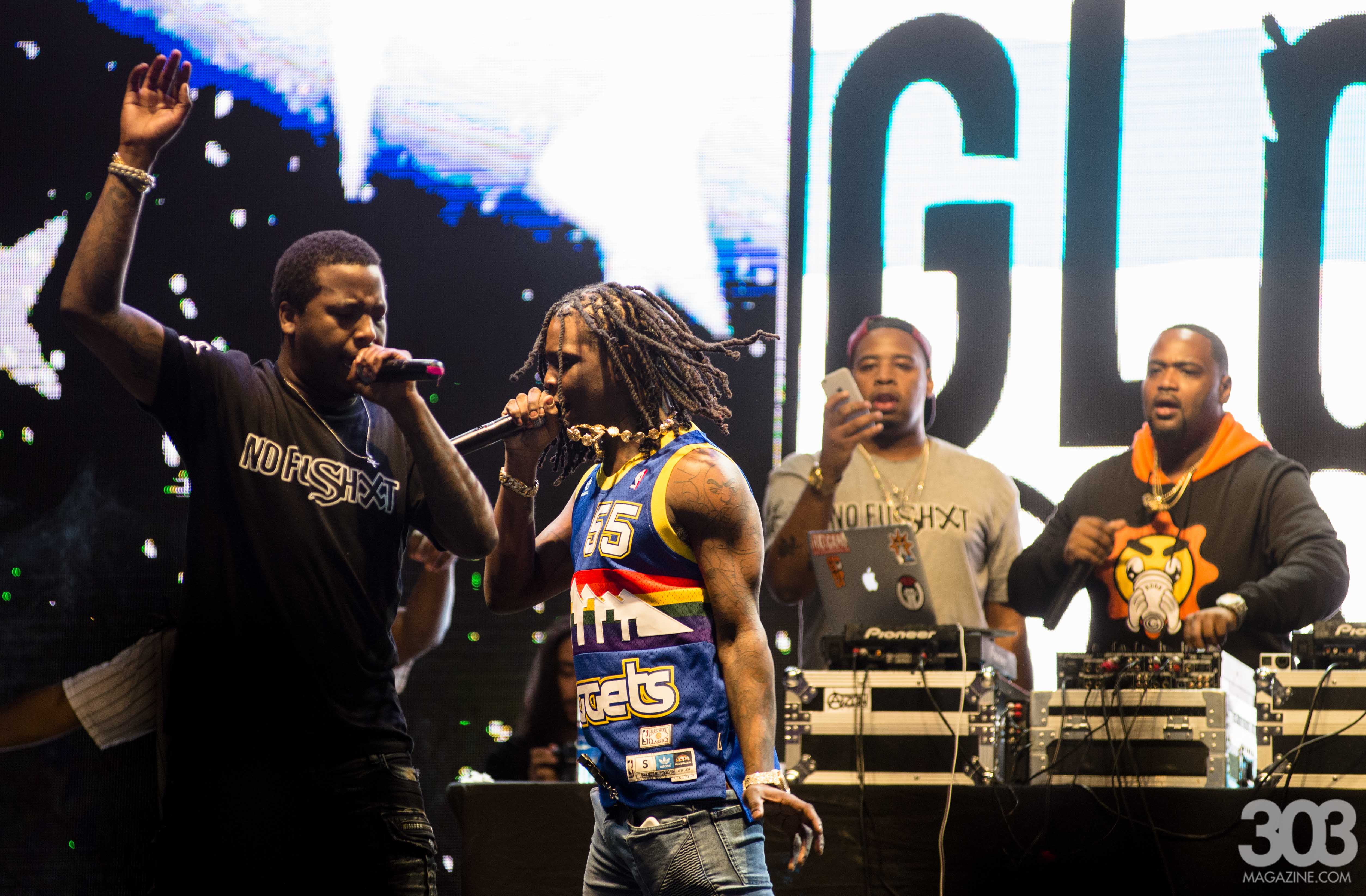 Chief Keef gets the crowd moving

Saturday began much earlier with a 10 a.m. autograph signing for the fans. Riders, photographers and producers from all of the featured films were accessible for an hour of signings. Temperatures climbed from a comfortable 70s to a high of 85 by the time the rail jam commenced. 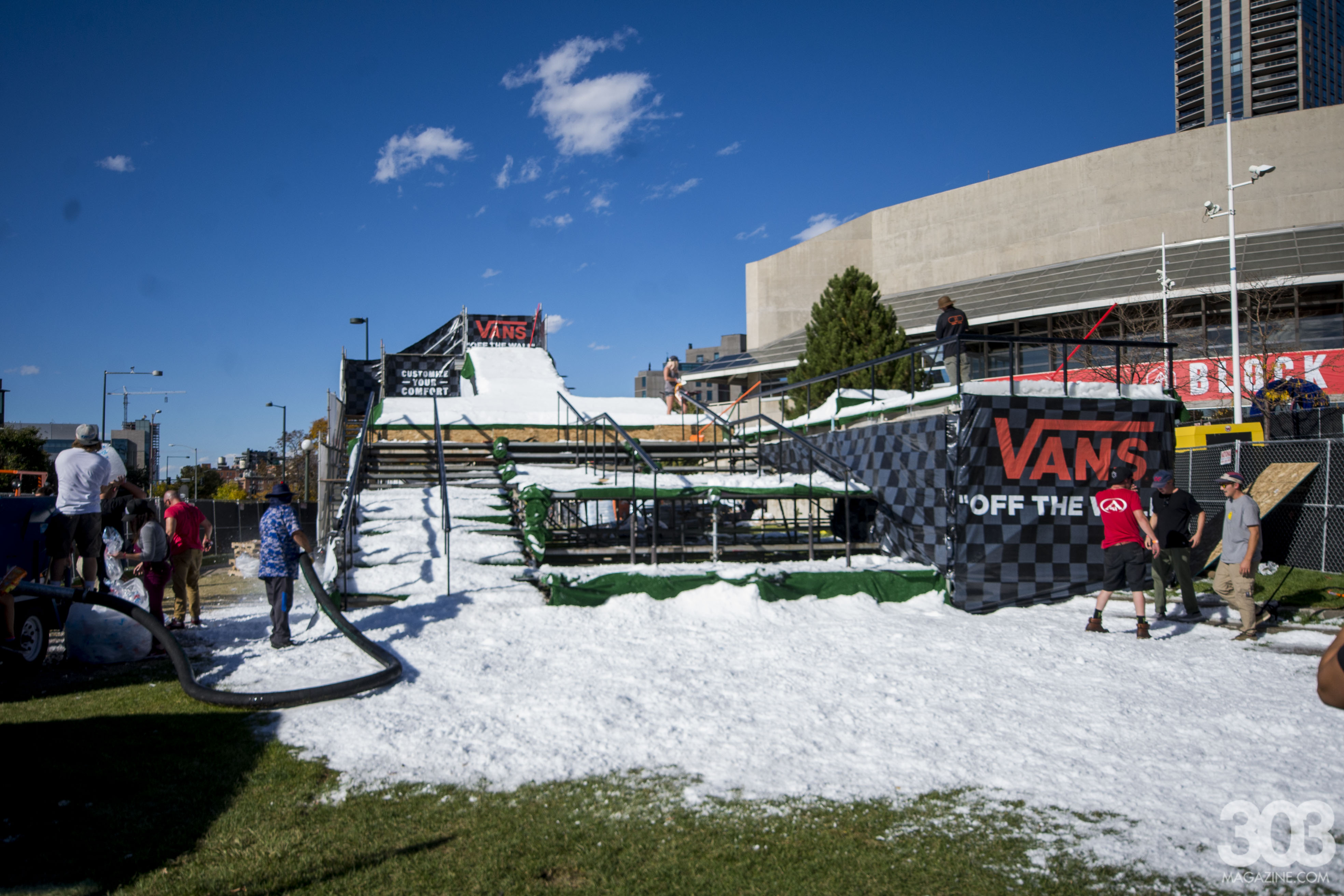 Twelve professional snowboarders took flight for an hour from 5–6 p.m. to compete in the Pro Rail Jam 2016. Defending local champ Dylan Alito was not able to hold his title this year– finishing behind Jesse Paul of Utah who took home the trophy with a clean bluntslide 270 degree out on the kink rail. Alito put up a fight and gave it his all in the last five minutes–taking a fall after attempting a back lipslide–twisting his arm and losing his glasses. 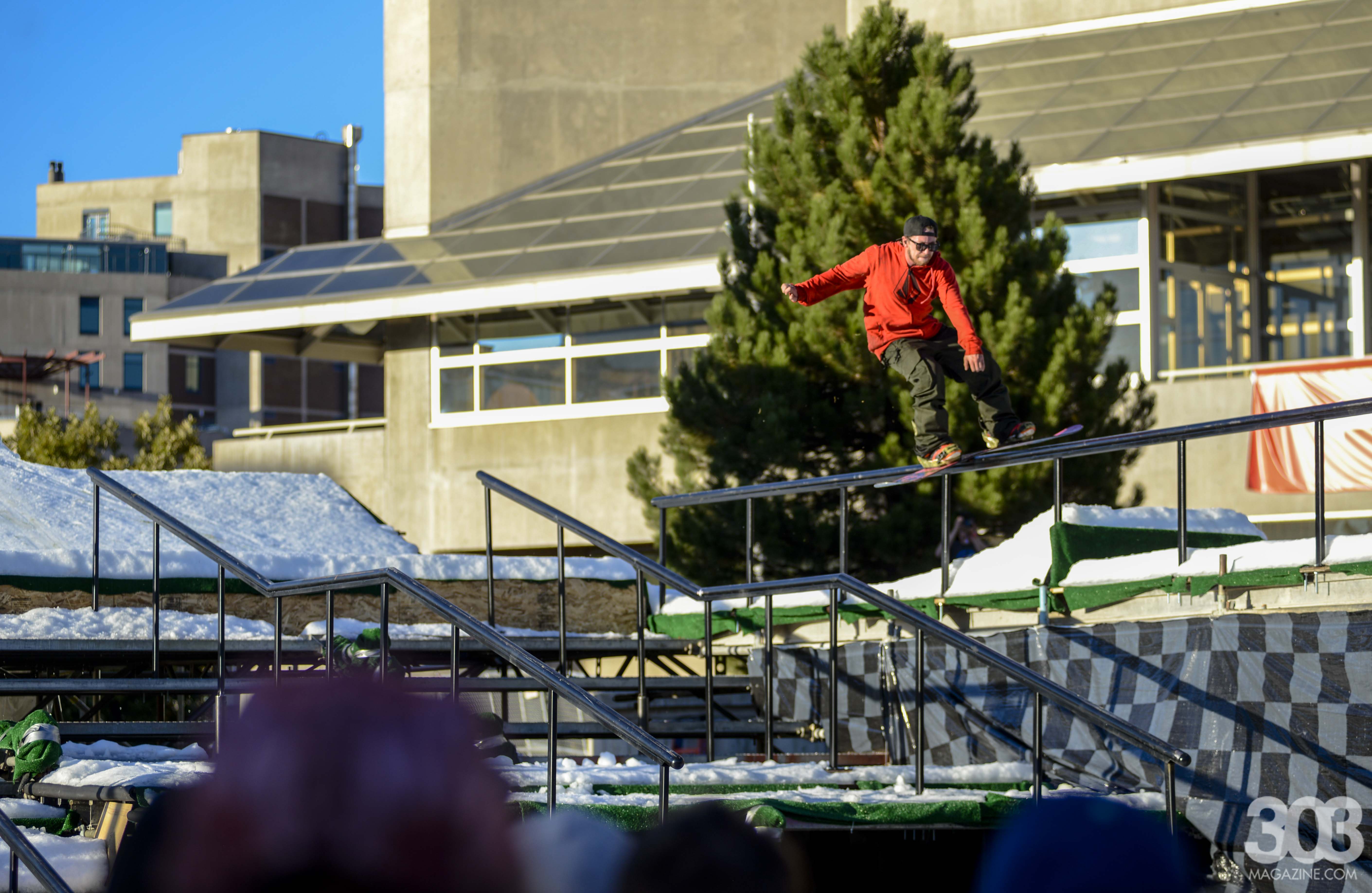 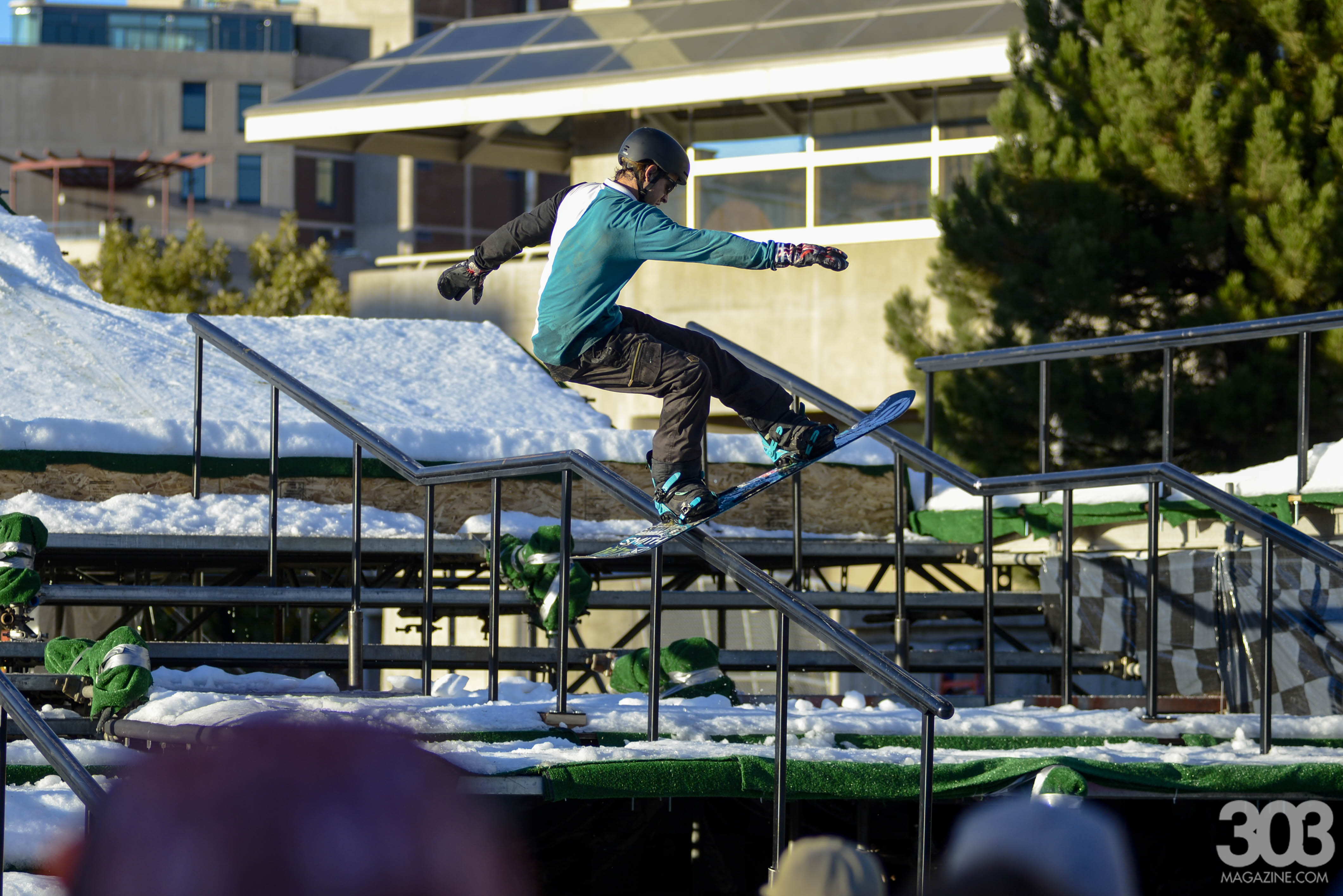 Trans World SNOWBOARDING’s Insight followed the rail jam and proved itself the biggest crowd pleasers from the film line up. The film focuses on individual riders, crews, and regions to give the viewer a glimpse of what makes each ride unique. The video featured several that had also competed in the Pro Rail Jam. Local Dylan Alito’s part in the film was well received– a comedic “bad-boy” element that got the crowd up on its feet cheering and laughing. Although Insight wasn’t the final film it seemed to put the cherry on top for the fans. 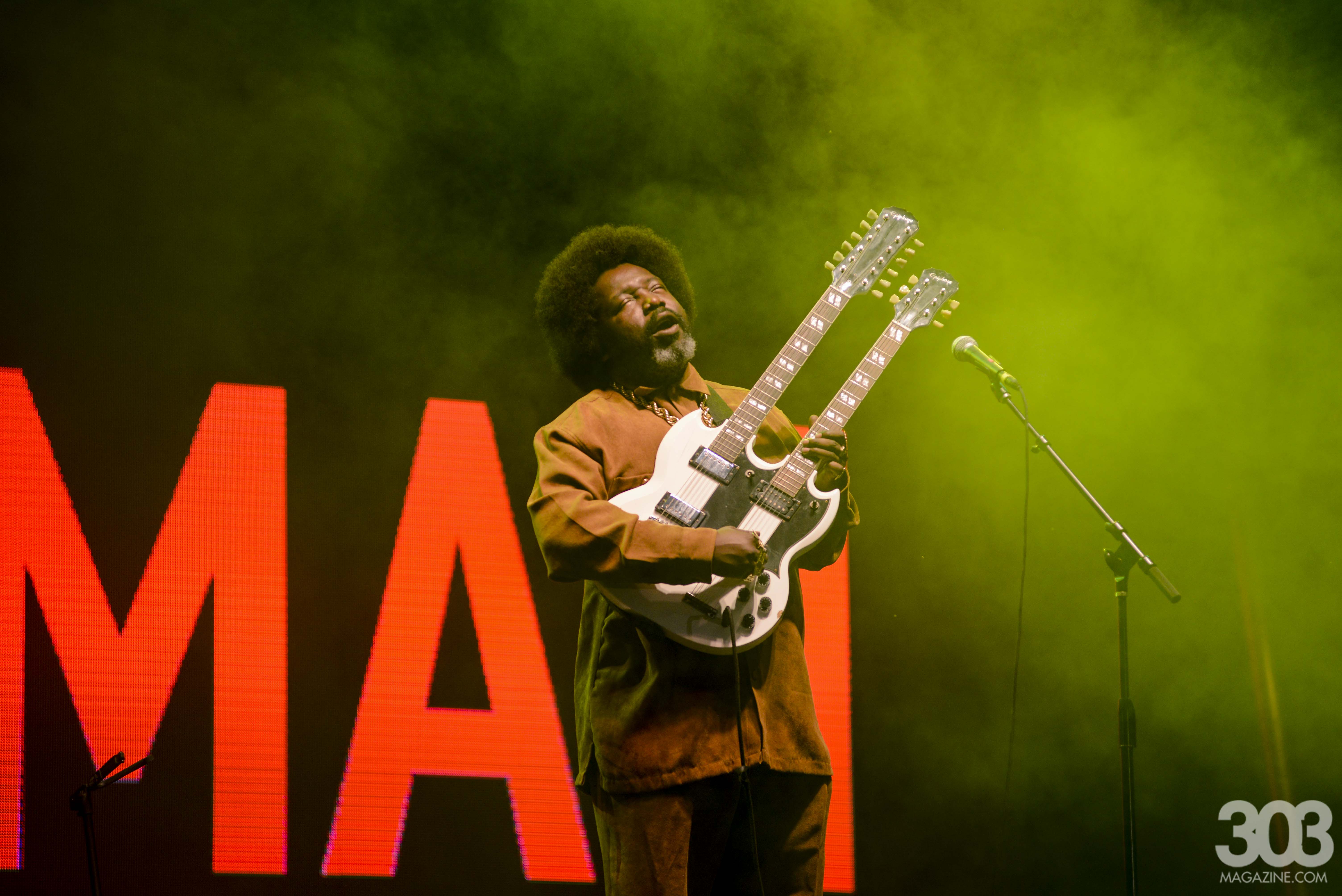 Afroman serenades the crowd between films at Block Festival 16′

The night continued with performances by L.A. rapper Afroman – who was surprisingly coherent for finishing an entire 40 oz on stage while boasting about his love for marijuana. Afroman was his own DJ – playing instrumentals off of what appeared to be an iPod. His set included fan favorites and sing-a-longs like “Colt 45“ and “Because I Got High.” The crowd lit up and a cloud formed above Sculpture Park as Afroman strummed a double necked guitar and belted “She Won’t Let Me.”

The Australian rock band Wolfmother headlined the festival taking stage at 9:30 p.m. The three piece group appealed to the headbangers and hard rockers – bringing a full set of drums, a keyboard, guitar amps and speakers stacks which really set the performance apart from the rest. The performance was a high-energy one–the moshpit got turning and feet got jumping. 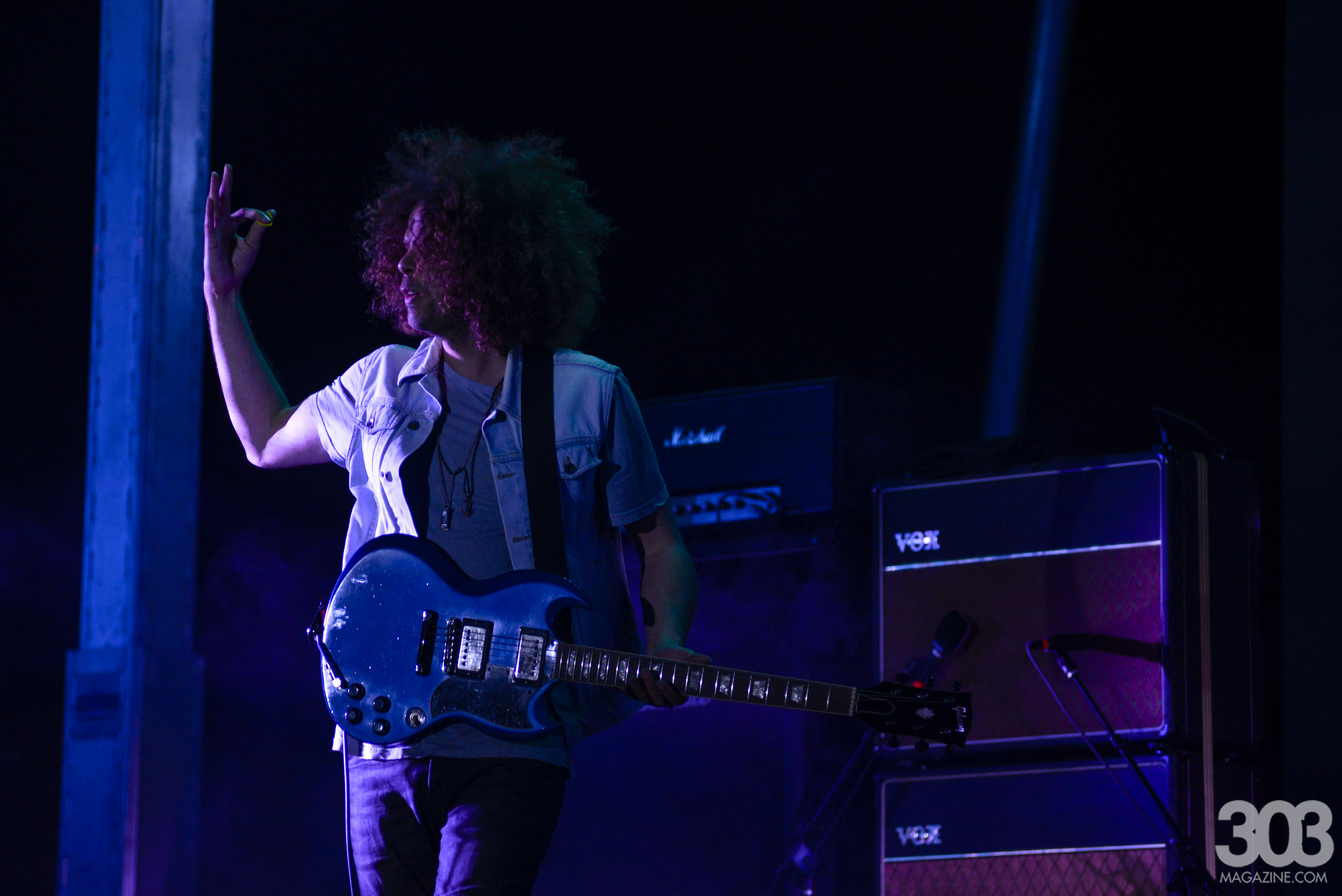 The band played hits like “Woman” and “White Unicorn” to the crowds pleasing. The band closed out the event for the weekend with a bang. This years Block Festival was the most impressive yet–dozens of snowboards were raffled off, multiple musicians had rocked the stage, pro riders competed in the Pro Rail Jam ’16 and a dozen films premiered on the outdoor screen. If you hadn’t come to the festival anxious for winter you were sure to leave ready for a blizzard and a new pair of boots. 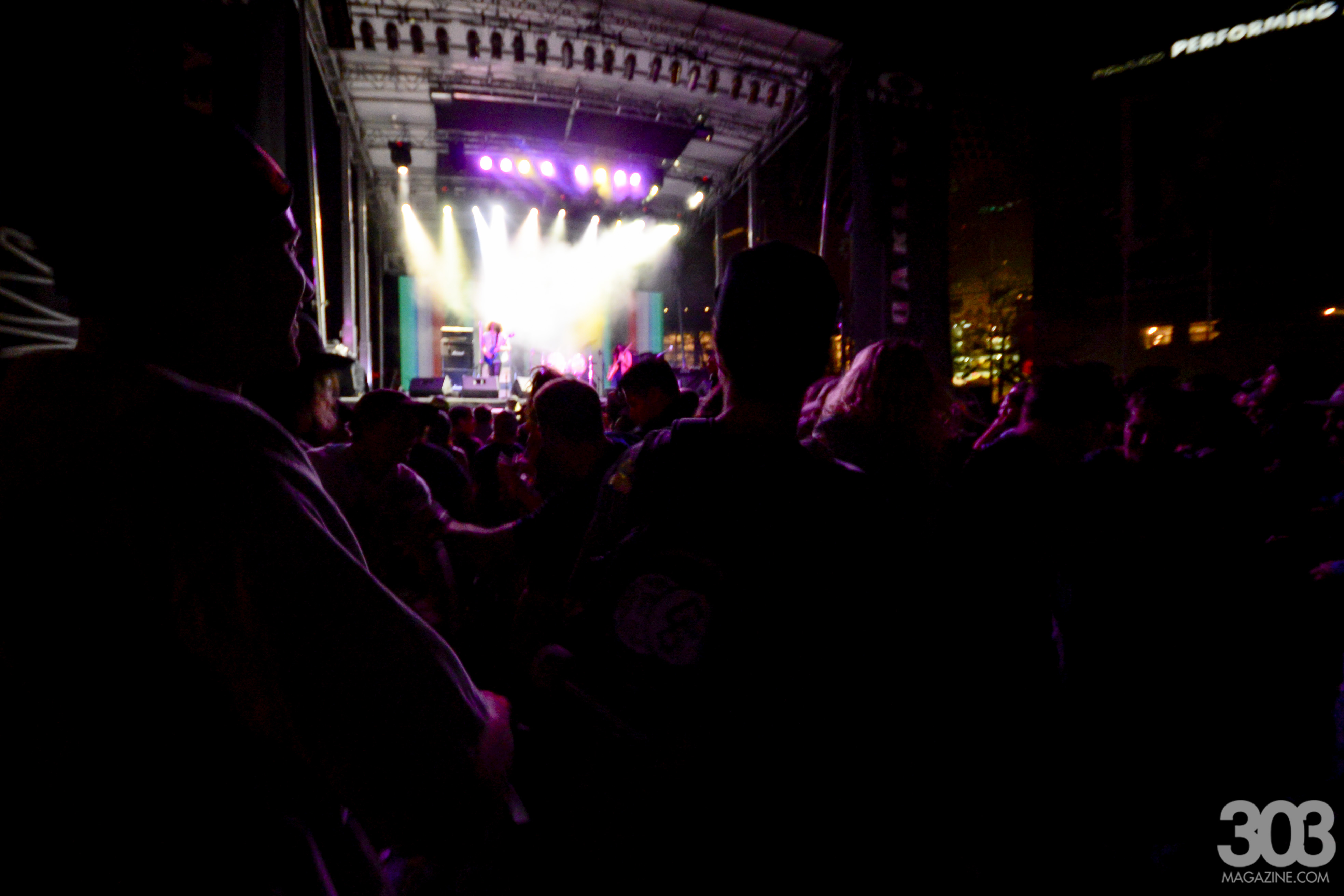 The crowd at high volume during Wolfmother. 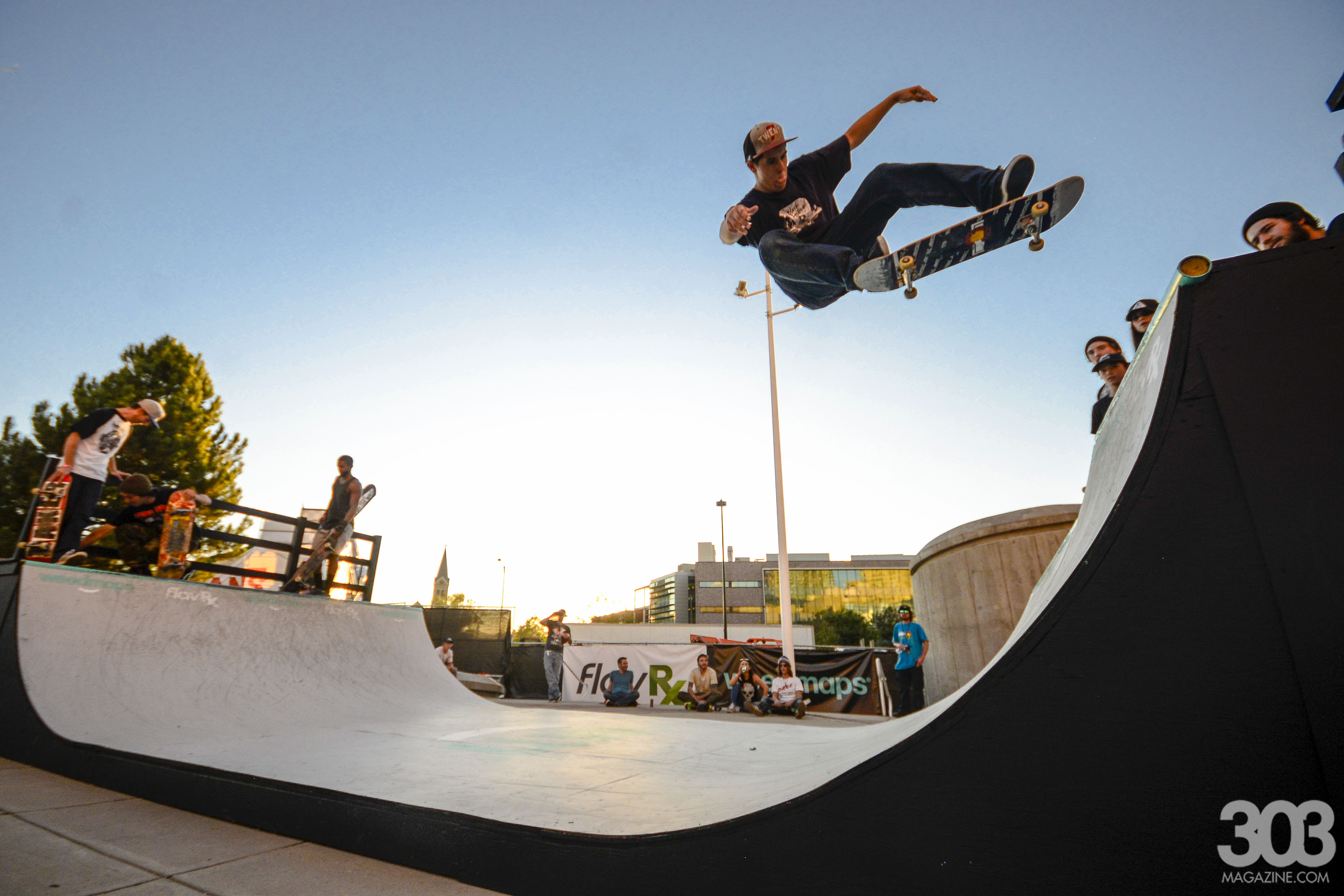 Locals get down on Weedmaps sponsored mini ramp 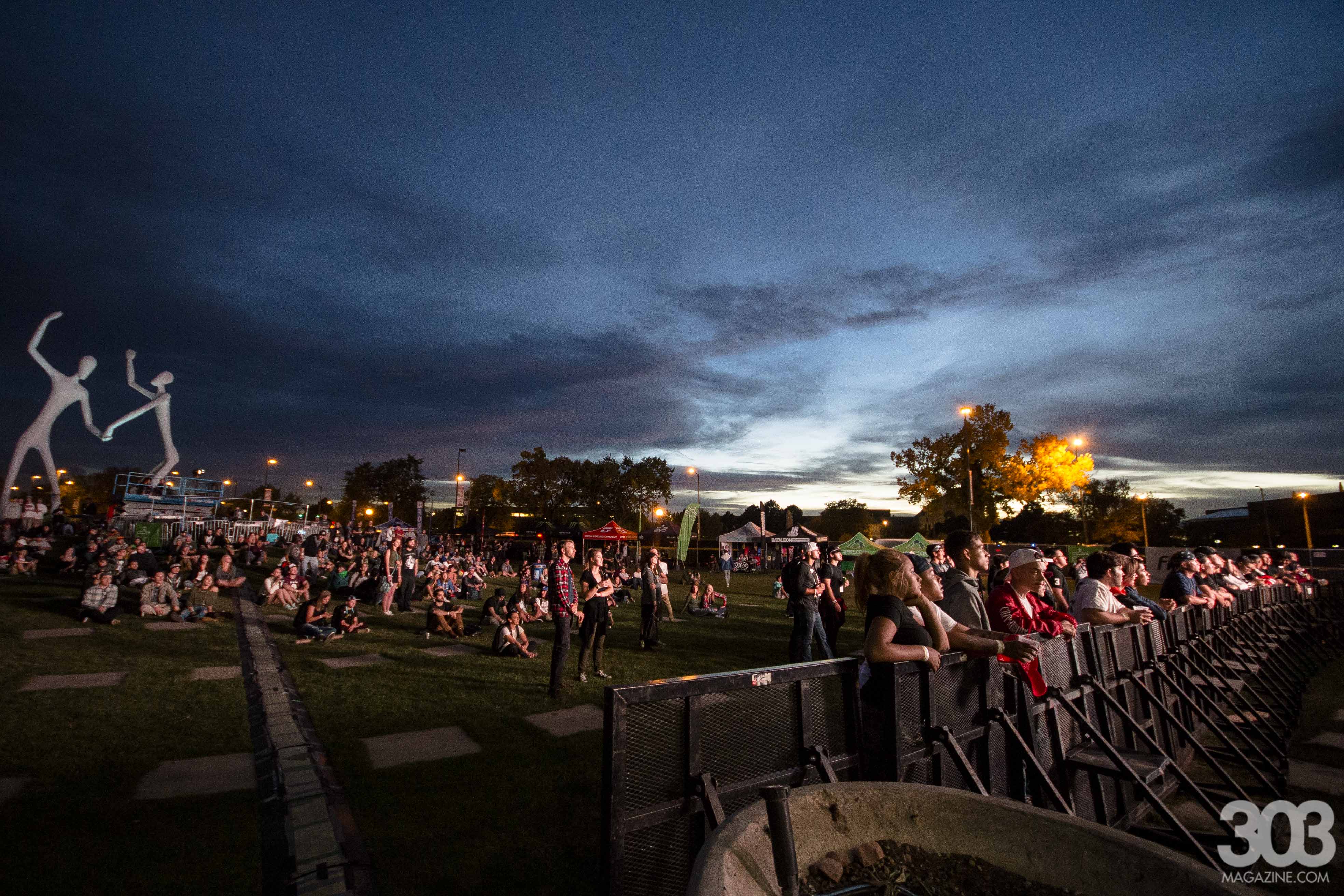 All photography by Austin Voldseth.