We Tried It – Floatation Tanks

After watching Stranger Things, I thought I would try to tap into the Upside Down myself in a float tank, also known as a sensory deprivation tank. So, I headed over to A New Spirit to check out their tanks for a day of relaxation.

After meeting with Andrea Hawkins, owner of A New Spirit, she showed me to my tank, one of three they have at A New Spirit. In a dark room with only a dim blue light, I was met with a four-foot-wide, four-foot-tall and eight-foot-long tank eerily resembling some sort of space ship. But, perhaps, in a way, it is a space ship to relaxation, your inner thoughts and feelings, or even… the Upside Down.

I got in hesitantly, as you have to close a door into the tank. I’m not claustrophobic, but the thought was very strange, so I opted to crack the door a little with a rolled-up washcloth. Initially, I used a little pink inner-tube made for children around my neck, holding onto the other end. I had some abrasions on my arm that burned in the 25 percent Epsom salt solution. In hard numbers, that’s 1,000 pounds of salt in only 10 inches of water. I tried to relax and soak up everything I was feeling.  Unfortunately, this was not a good plan, as my mind raced and I was uncomfortable.

I switched to using ear plugs and part of a pool noodle for my neck, and I even took the leap and closed the hatch door of my tank all the way. I had never seen darkness be so bright. I wasn’t sure if my eyes were open or closed, and the dripping of the condensation echoed off the metal enclosure. I was certain I had entered into the world of Stranger Things. But, I was here for an hour, so I thought I should enjoy it. I put my head back into the water. The only place I could really tell where the water ended and the air began was on my face. I lost all sense of time and space, occasionally jerking back into consciousness to find the handle to the door, afraid I was going to float away. In hindsight, I’m floating in 10 inches of water in an enclosed space; I’m not going anywhere. However, the tank has a way of taking your mind to any relaxing place. 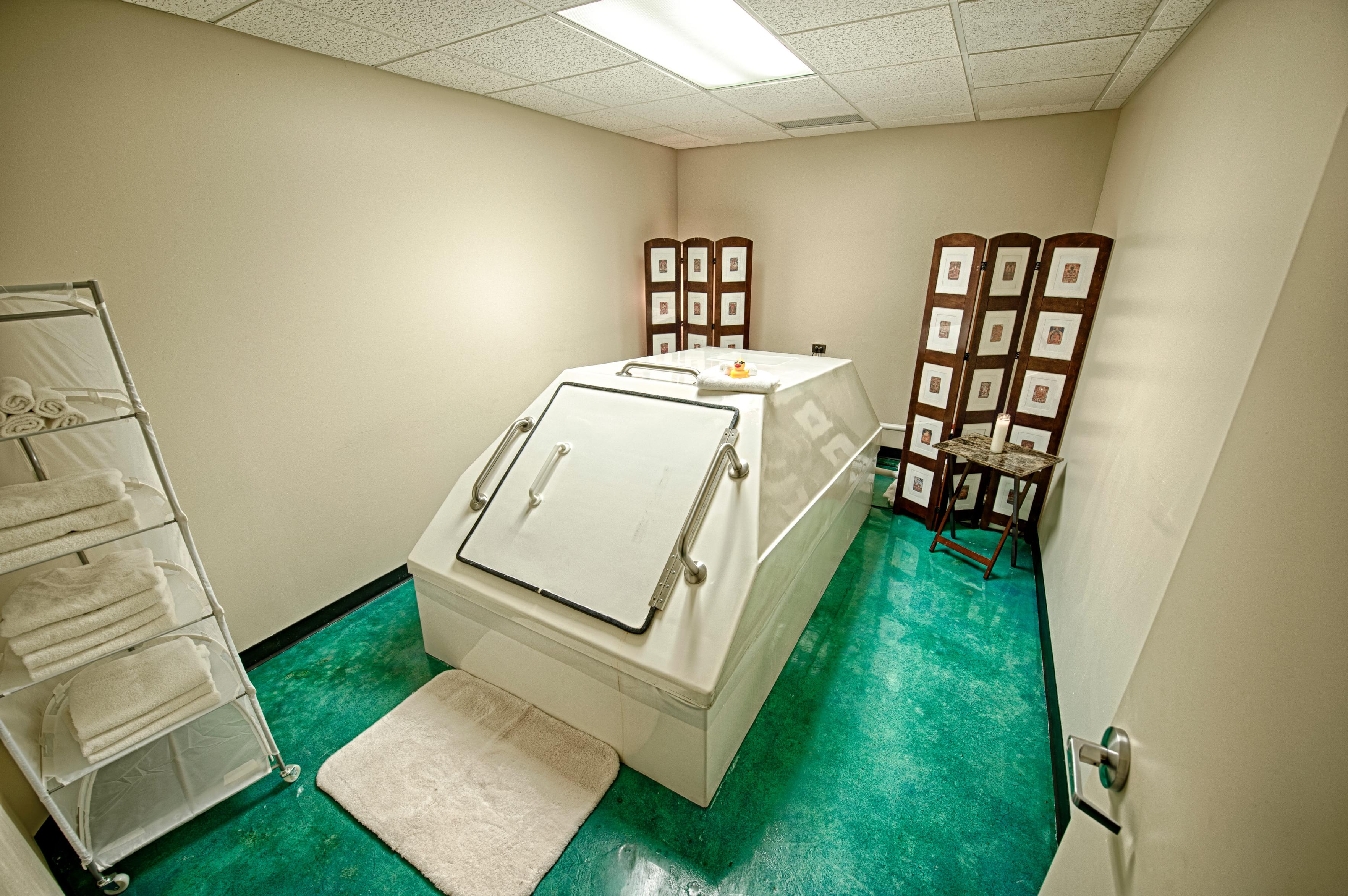 Photo Courtesy of A New Spirit

“The world is a crazy place and it’s nice that there’s some place you can go and it’s a little trip to Hawaii for an hour,” Hawkins said.

Once I relaxed and became used to the situation, my mind was lost in the blackness and the space of the tank. I have no idea what I thought about, saw or felt. I do know that I was incredibly relaxed, again occasionally “waking up” with a jolt when my hand fell into the water and felt the burn from the salt or I became aware of the situation. I was in the point between sleep and awake, a relaxation crossroads.

Some people say they experience lucid dreams, a higher presence, an other-worldly experience. A New Spirit claims that these types of salt baths increase mental, physical and emotional resiliency, increase creativity and problem-solving ability, enhance athletic performance and shorten recovery time, strengthen the immune system, alleviate pain & speed healing and deepen meditation and heighten self-awareness and visualization to achieve your goals. To be honest, I think I just took a well-deserved nap for about an hour and 15 minutes.

“It creates a weightless environment and takes all of the pressure from gravity away from your body — from your joints, from your bones, from your central nervous system, your brain, everything. So it really just allows you to turn inward,” Hawkins said.

Hawkins said many athletes use the tanks to recover more quickly. As a runner myself, I can say the anti-gravity feeling was incredible — no soreness and no muscles or bones being pressed on. It’s hard to describe the feeling of being weightless, but the salty water cradled my body lightly, allowing me to float effortlessly on my back.

A New Spirit offers one-hour floating sessions for $45, with additional hours for $30. Hawkins said the one-hour float is equivalent to four hours of rest for your body. Tanks are filtered after each floater, and more salt and water are added throughout the week as needed. The spa also offers a wide range of spa treatments ranging from acupuncture to saunas and massages.

Floating was a great escape from the craziness of the world, and my skin was silky smooth and soft after floating, surprisingly not dry. If you’re planning to go floating, make sure you don’t have any scratches or open wounds, as the salty solution burns, and go in with a positive mindset so you’ll have a great time. Be sure to shower off after floating; I was in a rush and thought I would be fine, but the Epsom salt stays on your skin for a while, and got on my car seats. It’s an easy clean up though. And while I enjoyed my first float, I might just opt for a massage next time. 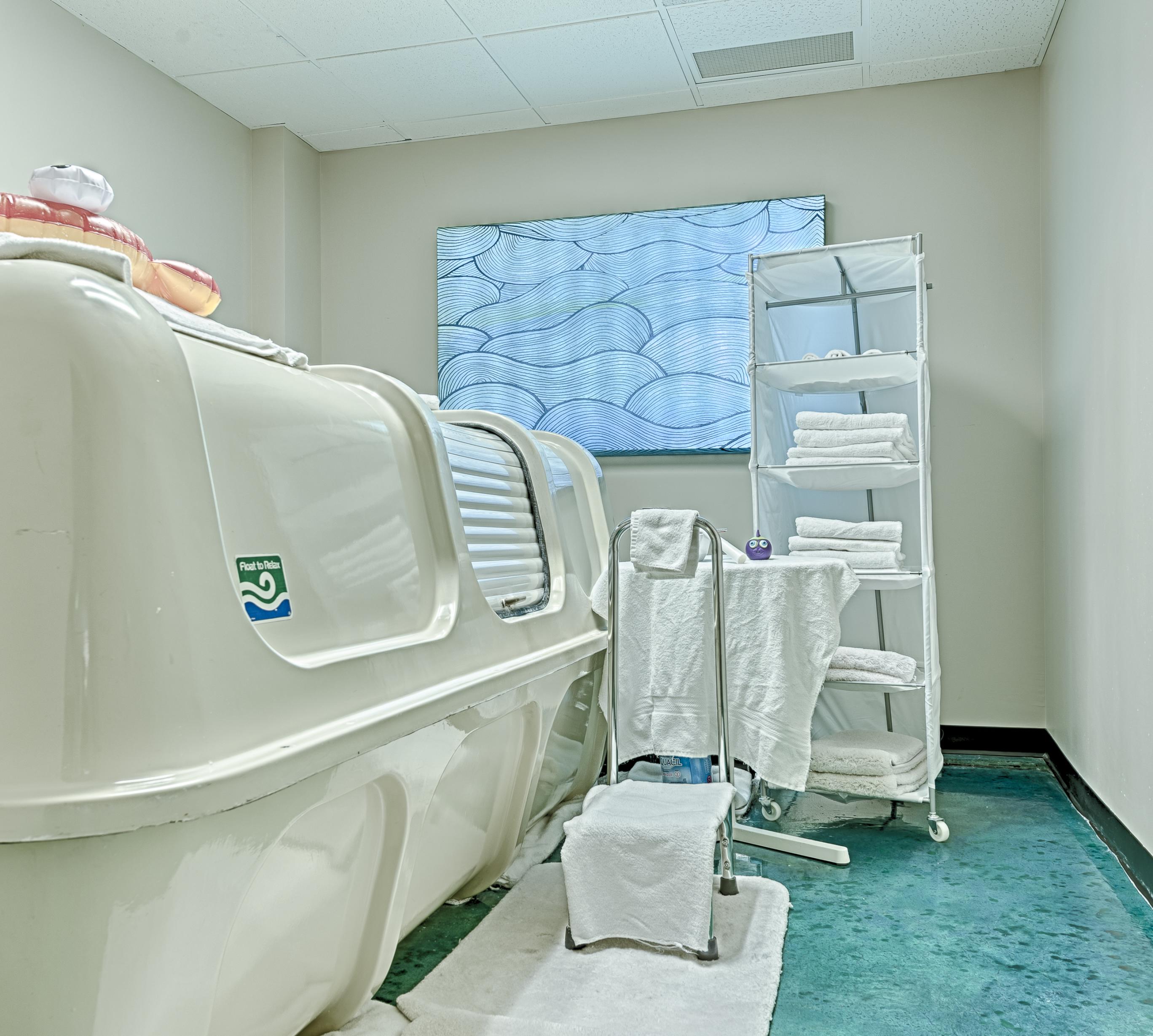 Photo Courtesy of A New Spirit