That crazy and creative group we all love and admire for some reason, Die Antwoord, consists of the intriguing, strange, talented and egocentric Ninja, Yolandi Visser, as well as producer DJ God. Though Die Antwoord, or “The Answer,” may seem a little strange in the states with their wild antics and love for violence, sex and shock value, they’re actually representative of “Zef,“the counter-culture movement in their home country of South Africa. Zef is also an abstract term that has long been considered an insult in the country, but Ninja describes it as meaning one has an “underdog” style.

Recently the band announced the end of their musical career, having always said that they would only make five albums. And that they did. Die Antwoord isn’t done making headlines by any means, given that they’re moving on to filmmaking after their involvement with recent blockbuster hit Chappie. But for Denver, this was potentially it – the Denver stop on their last tour before retiring their musical career. Maybe they’ll tour again. Honestly, who knows, but either way this was a particularly special moment for the Mile High. On the night of Monday, September 26, Die Antwoord performed over 20 songs at the Ogden Theater, including “Happy Birthday” because it was also Ninja’s very own birthday celebration. 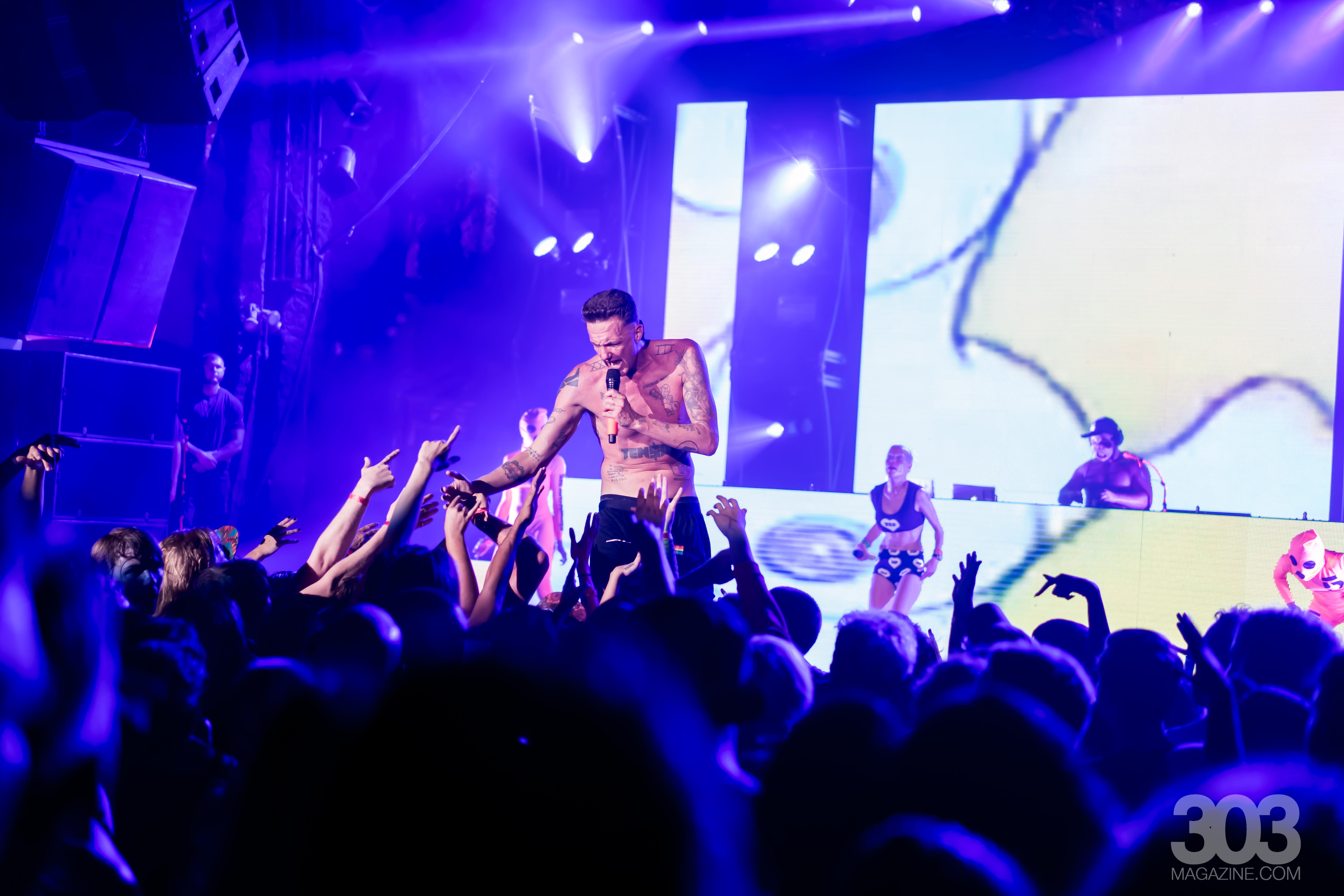 Spencer Foreman from Denver opened the show with a DJ Set that mixed rap, trap, dub and even classic rock. His transitions between songs were smooth, clever and quite flawless. Foreman actually scratched the turntable, which is something we don’t see enough of in mixing these days. He traveled through tracks by Queen, Three 6 Mafia, Sir Mix-a-lot, Snoop Dogg, Outkast and closed out the act with a song from “The Little Mermaid.” The DJ appropriately fired up the crowd for Ninja and Yolandi and proved to be the perfect party DJ. Seriously, hire him 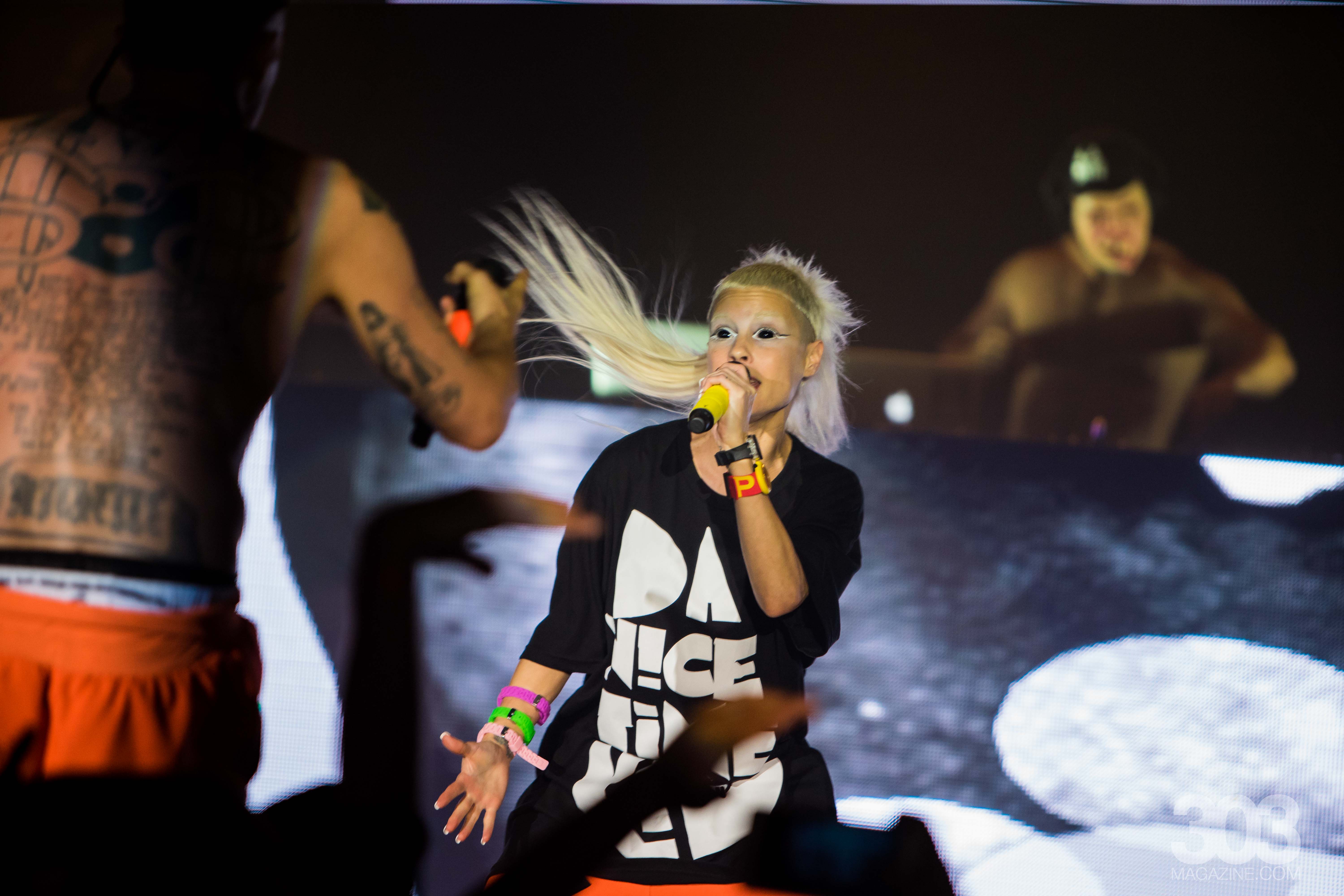 An instrumental introduction began before the floor lights faded out, creating an anticipation throughout the crowd that cannot be explained with words. The audience was shouting, clapping and masked with faces painted in unbroken stares. DJ God came out first with an instrumental opening. Spiritual electronica with diverse instruments and heavy beats streamed from the speakers as Visser’s voice crept in. It was almost as if they wanted us to get ready for a godly musical experience performed by Die Antwoord. After a few minutes, the remaining two members charged stage powerfully in an either passionate or cocaine-fueled spectacle. Ninja, Yolandi and DJ God all sported yellow sweat suits – hoods up – stormed the stage and the party started. 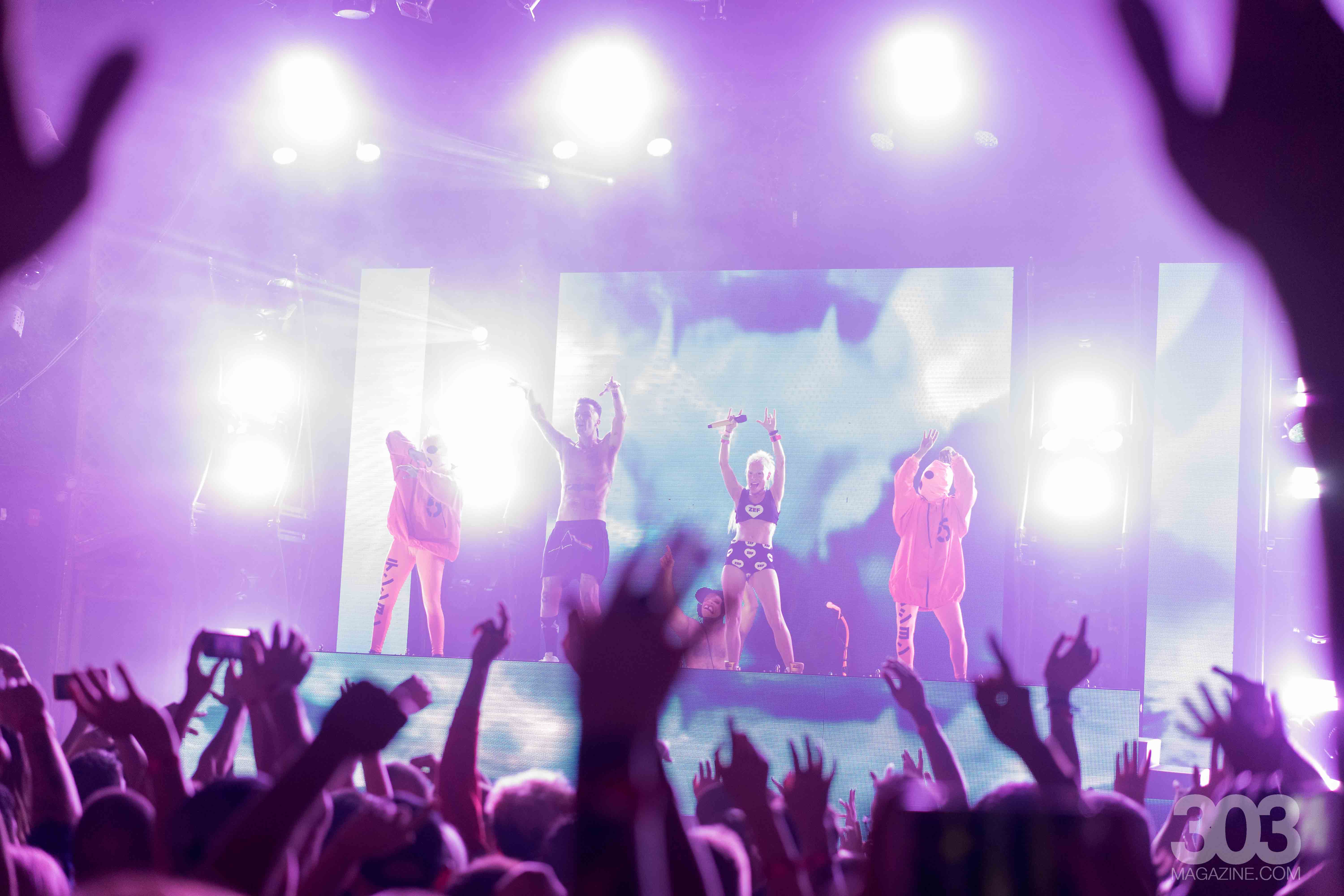 In the middle of the stage was an LED screen with an elevated walkway behind it for the duo to navigate through, and by navigate I mean pace, jump, dance and then some. Die Antwoord were active to say the least, living up to their talked-about stage presence and exceeding any expectations you may have had. Ninja immediately jumped into the crowd and Visser joined him soon after, tearing off her hoodie and aggressively whipping her hair free. Ninja soon removed his shirt, revealing his multitude of tattoos and dropping his drawers just enough for audience eyes to freely travel below the waistline.

“Colorado, what’s the fuck up? Let’s party like its my birthday in Denver, Colorado.” – Ninja

Ninja beat-boxed for “Fatty Boom Boom” and used his fluorescent microphone to imitate his dick. Dancers joined the stage for this one in eerie black-and-white body suits. After that, DJ God went crazy with house beats and dancers completely  took over the stage, almost impossibly pumping up the crowd even more. 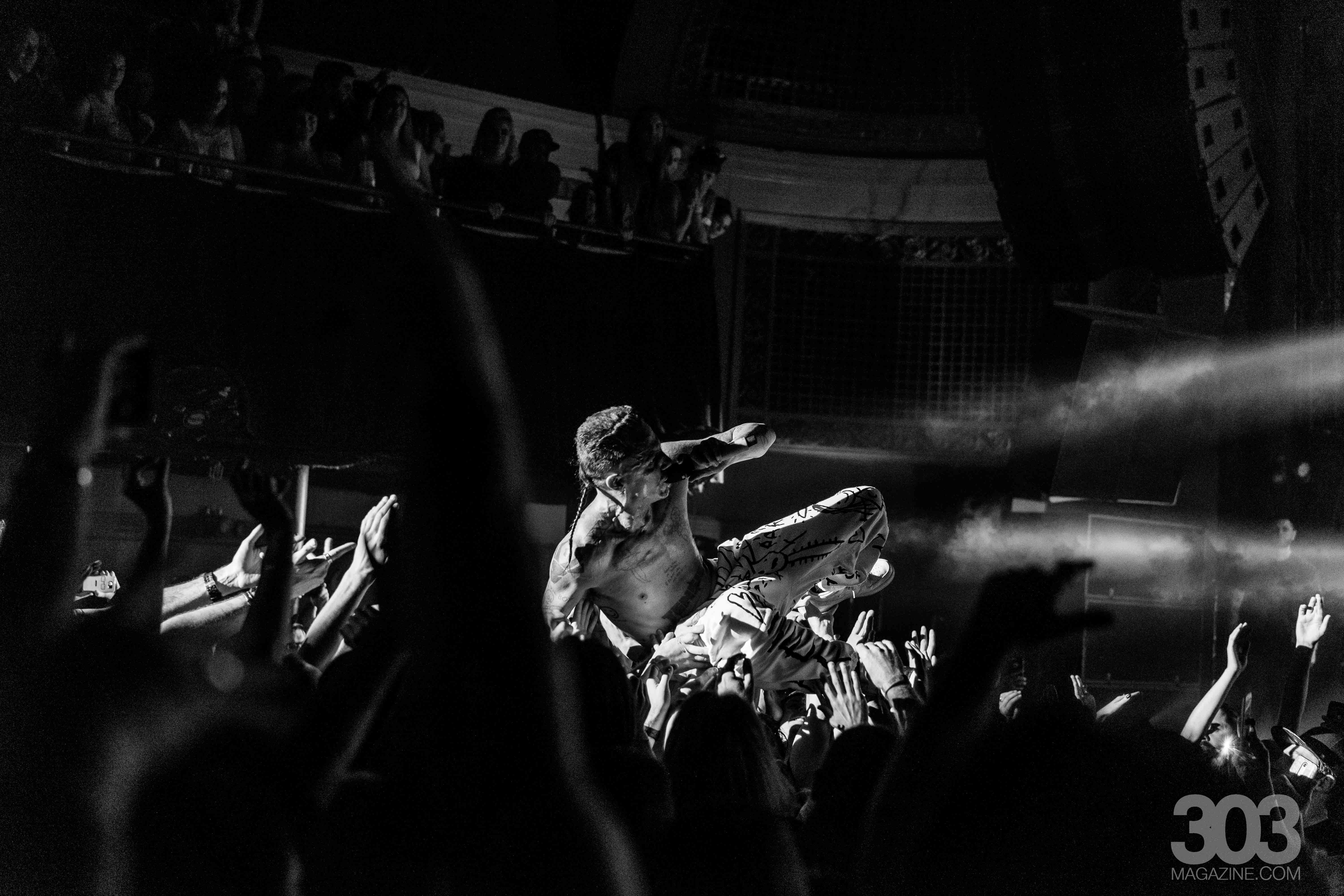 This was one of those concerts where the front of the crowd was truly blessed. Ninja stayed in the crowd. He crowd-surfed twice and even stood in the audience for long periods of time. When Visser wasn’t pacing in front of the LED screen, she joined him. At this point in the show, Ninja had the crowd chanting Visser’s name. And they selflessly did so. Yo-lan-di, Yo-lan-di. Ninja disappeared off stage just as Visser returned wearing a hoodie dress covered in banana icons. She frolicked aimlessly around the stage, often bending over just enough for the audience to see what was under the hoodie. Ninja returned in blue sweatpants with a matching banana icon spread across his ass. He then put Visser, who was now in a full bodied-animal sweatsuit, on his shoulders while she spat her next verse. 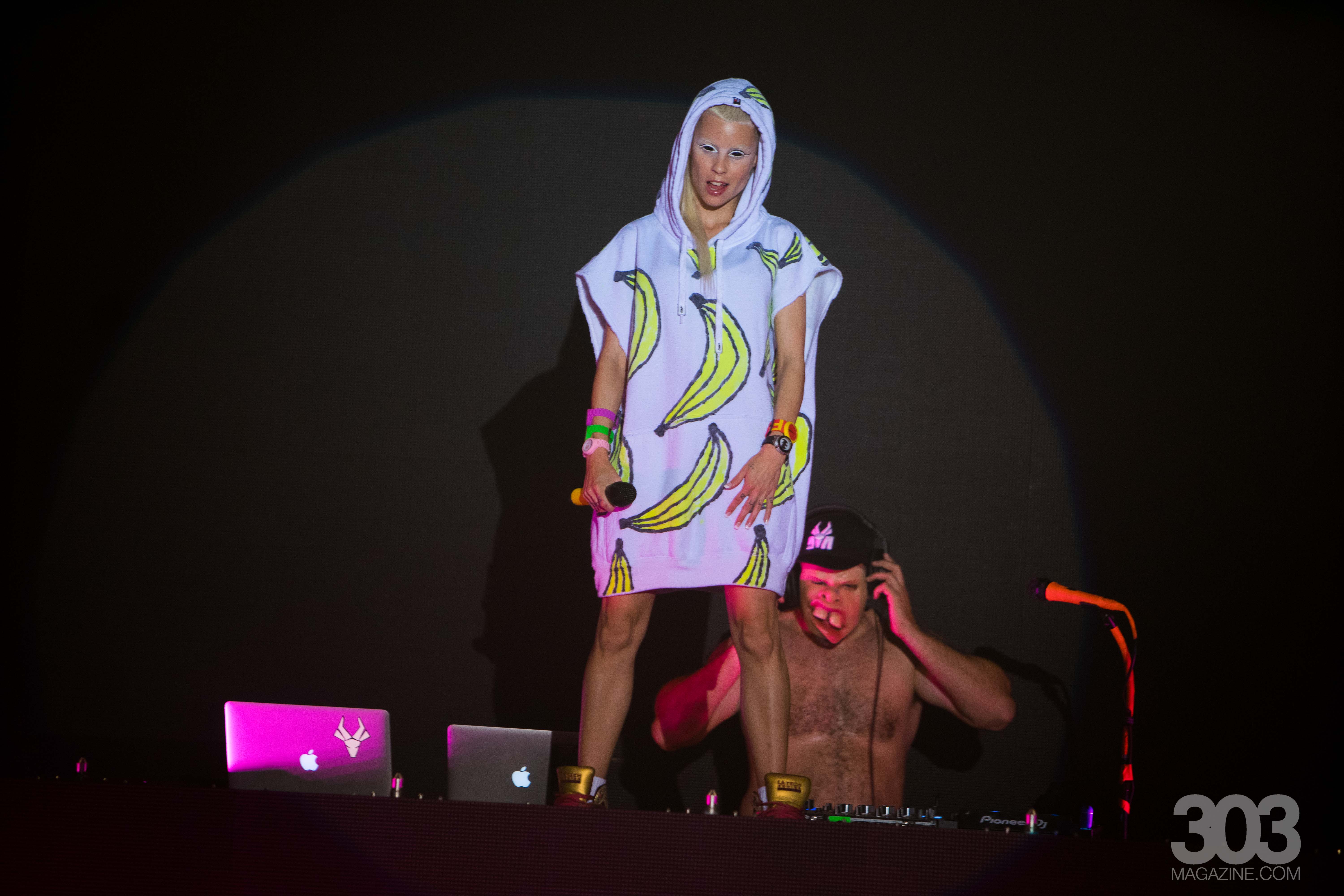 “42 mothafucka! Right here in Colorado. So you know what’s coming up next right? 3…2…1…” Ninja prompted a “Happy Birthday” sing-a-long. Even when the part of the song came around where half of the audience gets awkwardly quiet and you’re supposed to insert the birthday individual’s name, everyone sang, “happy birthday to Ninja” without a hesitation and perfectly in unison. As a thank you, Ninja mooned the crowd during the next song… And almost offered up even more than a view of his back-side. Later on in the show the favor was returned when an excited concert-goer sat atop her friends shoulders and flashed Ninja. His gold teeth glistened in the light, accompanied with two long braids flowing in the wind. 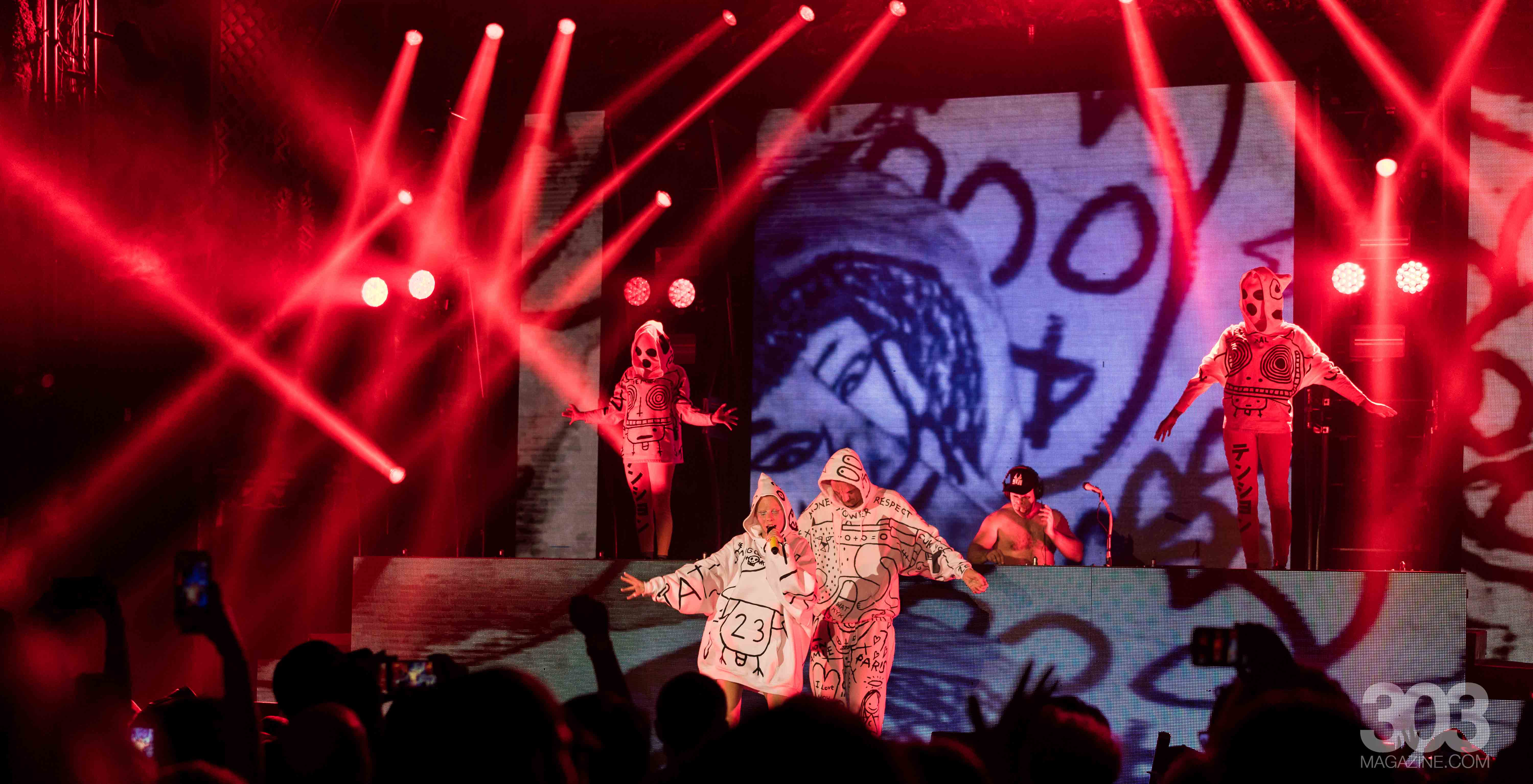 Ninja and Visser often left the stage for costume changes but departed with awesome electronic jams performed by DJ God and then returned in magnificently hilarious yet somehow fashionable wardrobes. Upside-down cross icons, Pink Floyd underwear and sweatsuits unimaginable to the average human mind were all worn throughout the evening. For the final half of the set Ninja wore nothing but Pink Floyd boxers and would often bounce up and down purposefully with the intention of flopping his samurai sword and stones around. He showed some serious confidence in his girth. 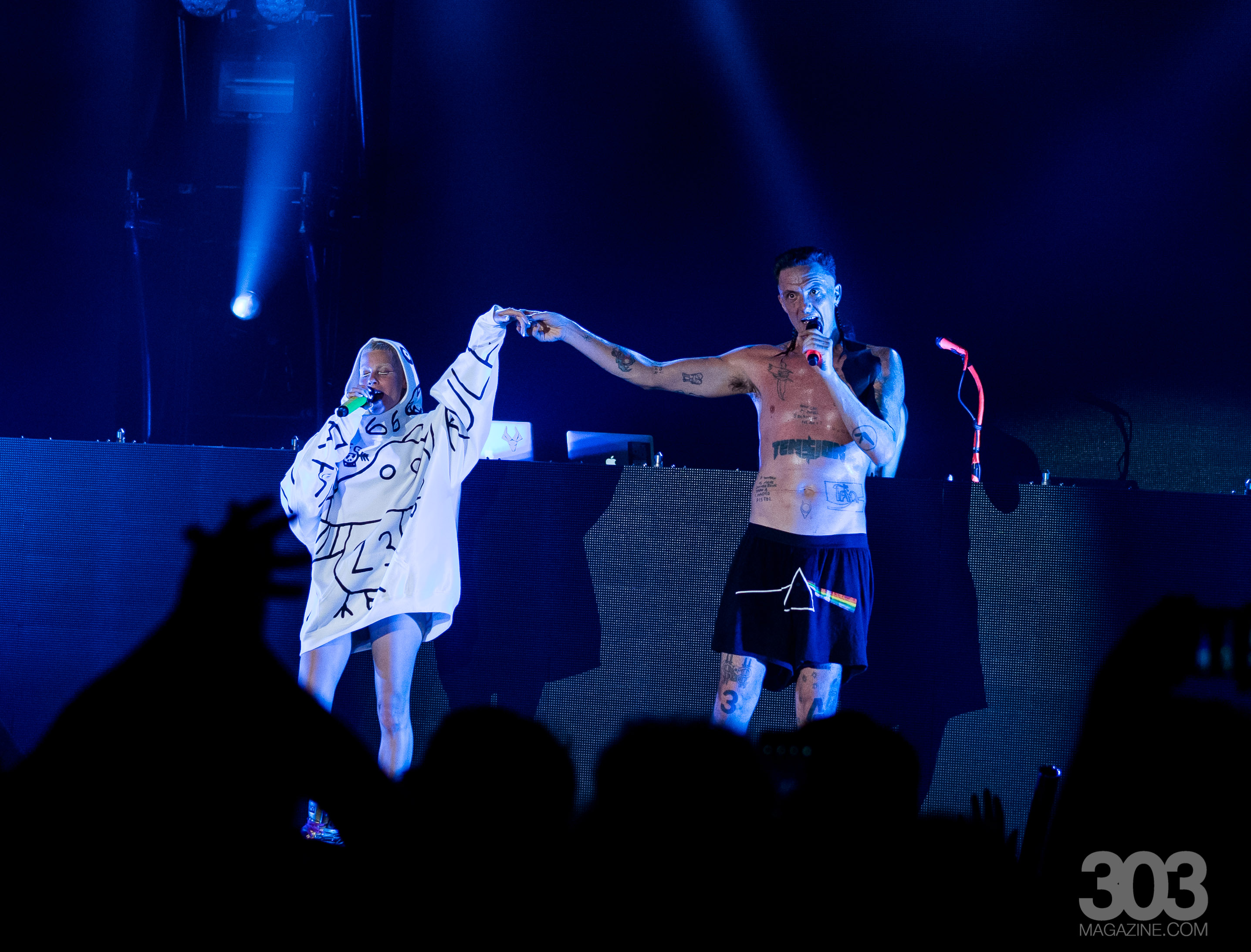 Die Antwoord ended their set thanking the audience and then raging to some deep electronic music alongside their dancers. When the beats faded out the trio bowed at the front of the stage, this time acting as if we, their fans, were the gods. The crowd erupted in applause, borderline begging for more, and Die Antwoord soon returned to the stage with two encores, the concluding track being their memorable “Enter the Ninja.”

It was at that point that I realized, they did it, they really did it. For approximately 22 songs they went through multiple costume changes, amped up the crowd, evoked insanity and flawlessly executed their songs live. Die Antwoord pleased the crowd by playing all of their hits including “Baby’s on Fire,” “Enter the Ninja,” “I Fink You Freaky,” “Cookie Thumper” and “Fatty Boom Boom.” In return, we can only hope it was the best birthday ever. Happy Birthday, Ninja.