Colorado favorite, electronic legend and University of Colorado dropout Derek Vincent Smith returned to Red Rocks last night—and though the name may not ring a bell, you almost certainly know him by his suitable moniker Pretty Lights. It’s been 10 years since the electronic artist debuted his first album, and his success and popularity certainly haven’t faded away. With two nights at Red Rocks to celebrate (for the fifth year in a row), and two additional nights in Telluride two weeks from now, Smith is continuously showing his love for his home state. With an incredible show returning annually, never-ending popularity and the very recent Bassnectar earthquake in Commerce City, fans really didn’t know what to expect from Pretty Lights this time around. Smith is returning tonight for part two of his Red Rocks spectacular—here’s what happened from night one. 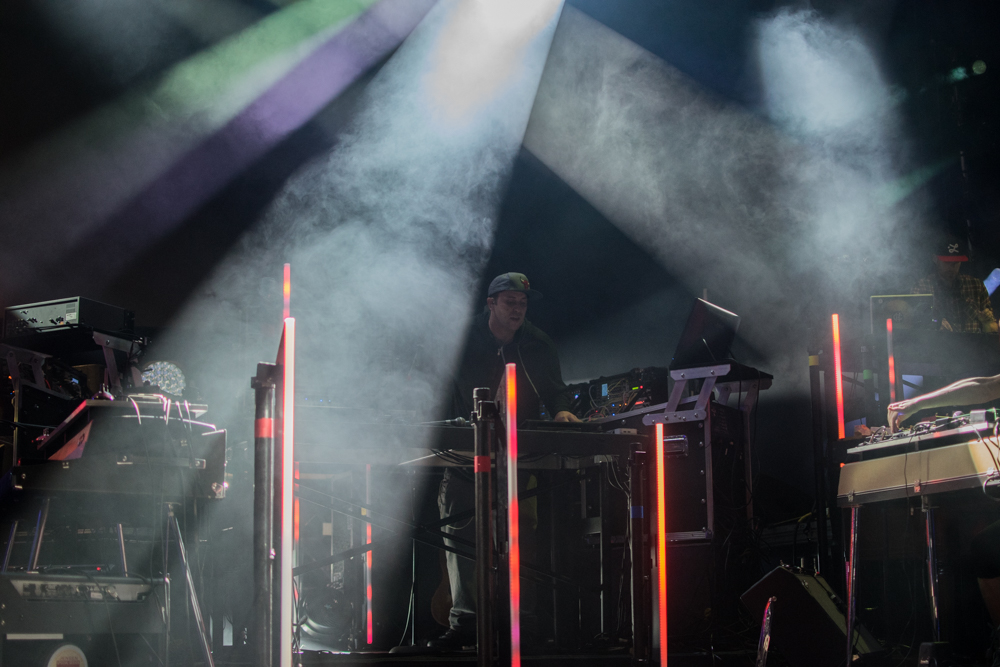 Beastie Boys’ “Intergalactic” filled the airways and slowly the crowd stood up in anticipation. Everyone danced and moved or hurried back from their bathroom stop or beer run. Suddenly, the lights went dark—but humorously because it was oh so momentarily. The crowd erupted in applause and shouting.

“We are so ready for tonight, are y’all ready Red Rocks?” — Pretty Lights (Derek Vincent Smith)

The darkness disappeared, but Smith started modestly—no lasers or strobes. That ended soon enough. Light rods appeared, hanging from the ceiling of the stage. Jam band vibes married with electronica in an epic performance from Pretty Lights. There were backdrops of beaches and bridges and insane drum solos paired with ambient female vocals. Pretty Lights live style of hip hop-influenced electronics merged into one continuous mix that perfectly accentuated the true talent and orchestral skills of the electronic producer. Joining Smith on stage was an array of band members curating a one-of-a-kind experience for fans. Though he started with an incredible light show, the crowd would soon learn that Smith was merely warming up. 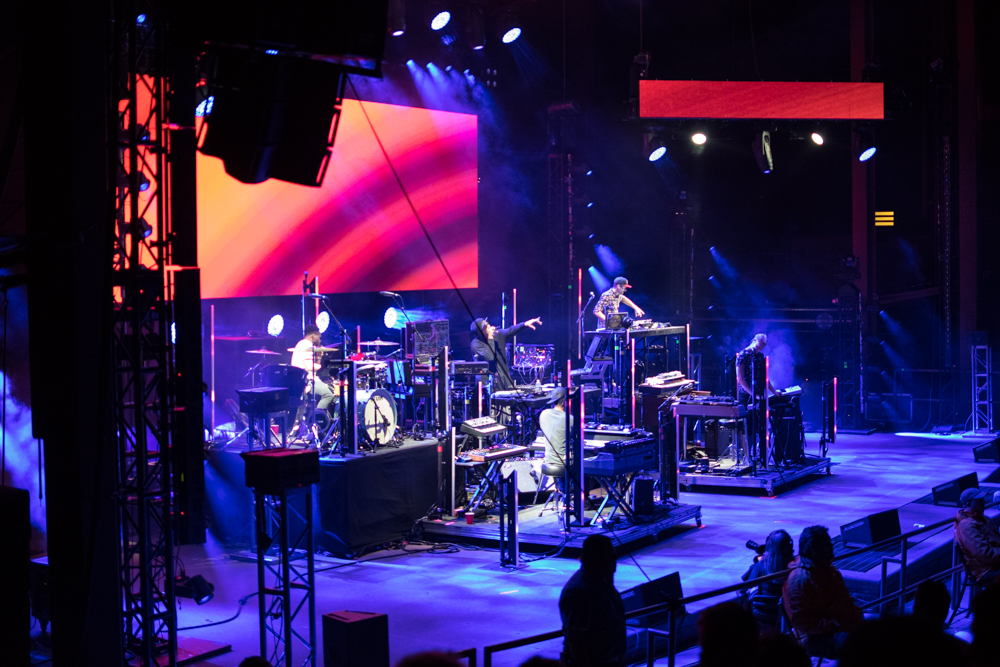 Red Rocks is arguably the best venue in the world. But maybe not for Pretty Lights. Now, hear me out before you get too upset with that statement. I love Red Rocks and I love Pretty Lights. Don’t get me wrong, the light show was phenomenal. But unless you were in rows 1-20, it was like you were in awe watching a spaceship land in the distance. It proved a difficult scene as the wind migrated all of the fog bursting out of the machines, and because of that, Pretty Lights just couldn’t reach full potential. I’ve seen Smith before and the most memorable thing about the performance was the ceiling of lasers that you persistently felt compelled to reach into the air and grab a hold of. Unfortunately, those lasers simply didn’t have as far of a reach due to the varying conditions of Red Rocks.

None of this prevented the crowd and myself from having fun. The light show was, at the very least, spectacular. It was absolutely beautiful as it evolved through transitions and gradients—from skylines to rainbows and railroads. Smith incorporated lasers, rods of LED lights, crowd-facing beams and much, much more. Smith made the most of what he had and then some in an unthinkable fashion. 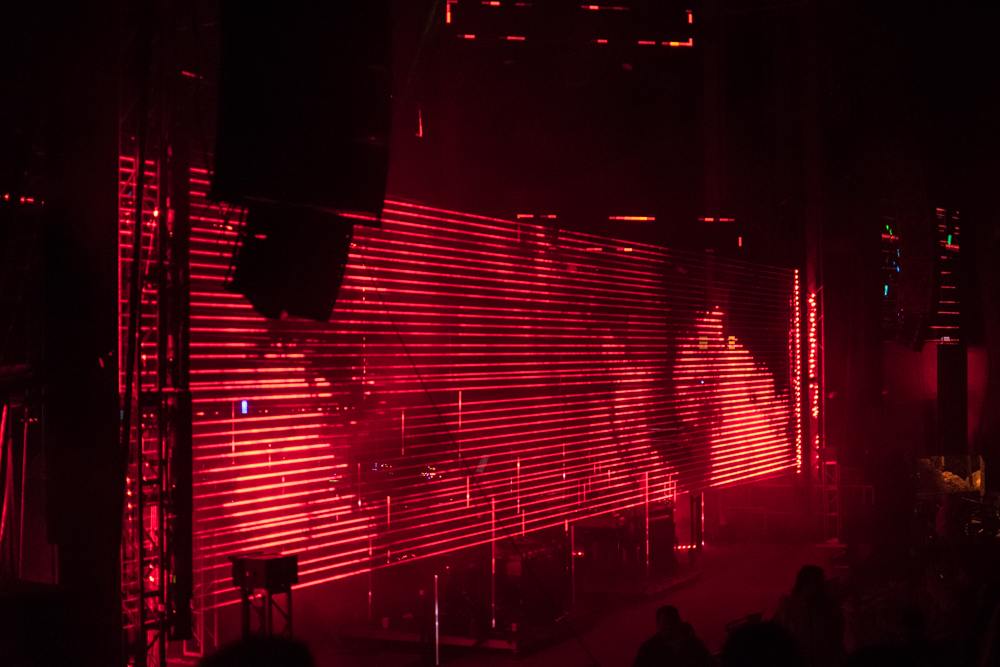 Maybe the elements weren’t in his favor, but we still couldn’t be more thankful. Just because the wind wasn’t cooperating didn’t mean other elements were disregarded – I’ve never seen such impressive use of light projection onto the majestic natural structures of Red Rocks Amphitheater. The light show was one of the best I’ve ever seen at the venue and his commitment to Colorado only made the sentiment more meaningful. 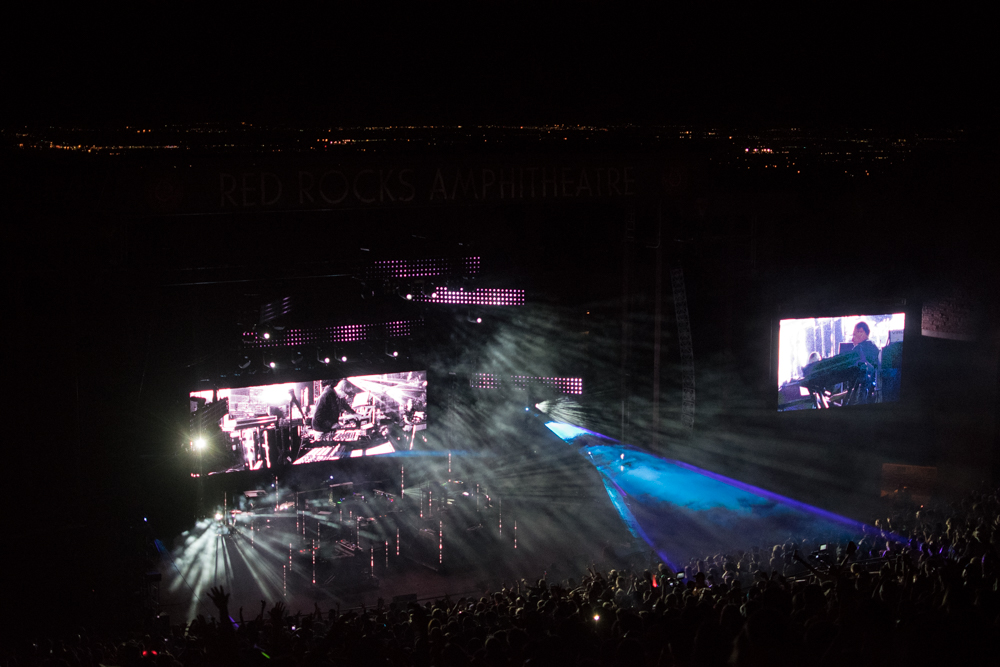 The performance escalated, adding projection lighting to the rocks that surround the stage. They formed into rainbows and circular links complementing the strobes and transforming into honestly unexplainable light projections. Matrix-like grids of green lasers stretched vertically and horizontally across the front of the stage like a hologram screen masking the group from the audience in a surreal experience of neon longitudes, latitudes and musical frequencies. Multicolored rings circled around the natural formations appropriately creating symbols then fading away into collages of simple but creative lighting. The projections strobed the stage, alternating with lights on the rocks and the audience to create a mesmerizing setting captivating your attention like that one Twilight Zone episode that really sunk in last New Year’s. The lighting was nearly indescribable but not over-ambitious. It was modest and impressive, spotlighting simplicity while keeping the crowd on their toes—toes that were concretely embraced in dancing shoes. 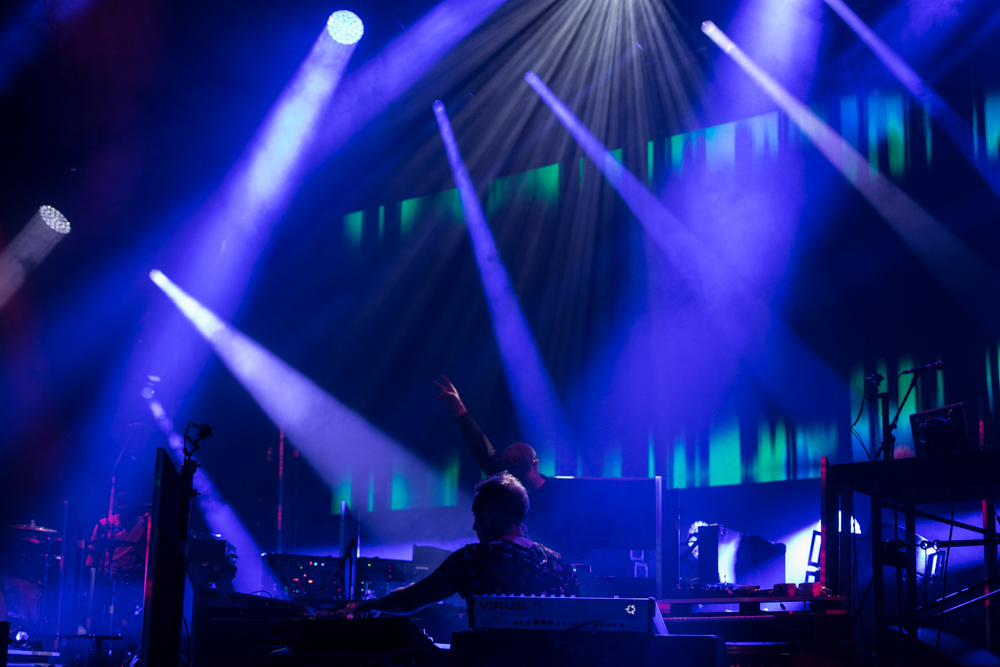 He mixed all of the fan-favorite songs into something masterful and transformative that’s classic but distant from the original. Getting even more progressive into the entrancing light show, the LCD screen collaged live recordings of each performer in black and white. From there on nothing was ever the same. Different light structures and techniques faded in and out, blending into a multitude of luminous beauty and escalating with every passing minute.

Though extravagant, it felt effortless—classy and not over the top. Each visual sequence was unique from everything before it either because of different combinations of the numerous light projections or the preparation and combination of each form. The soles of my shoes suffered but it’s safe to say that I’ve never seen such pretty lights.

Check out our full gallery from Night One by Sina Ghozati here. 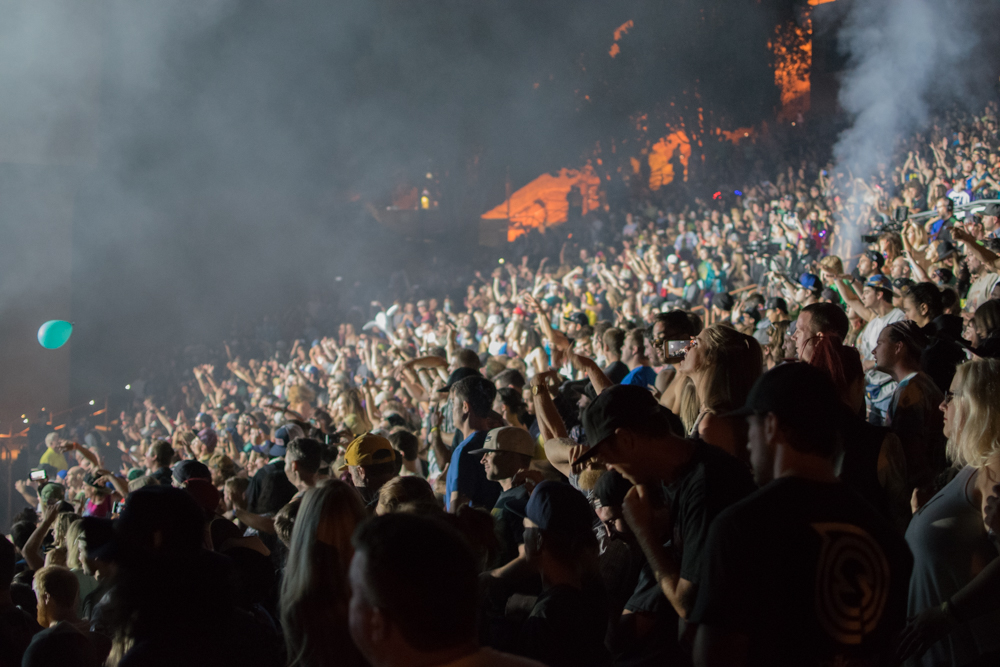