Review — Portugal. The Man Flexes Musical Muscles on the Rocks

Not even rain drizzles and foggy clouds could keep the crowd away from the Glass Animals and Portugal. The Man show on Wednesday, July 20, 2016. A flowing mixture of trip-hop, rock and psychedelic vibes streamed from the stage all night, and kicked off with the artist Son Little. 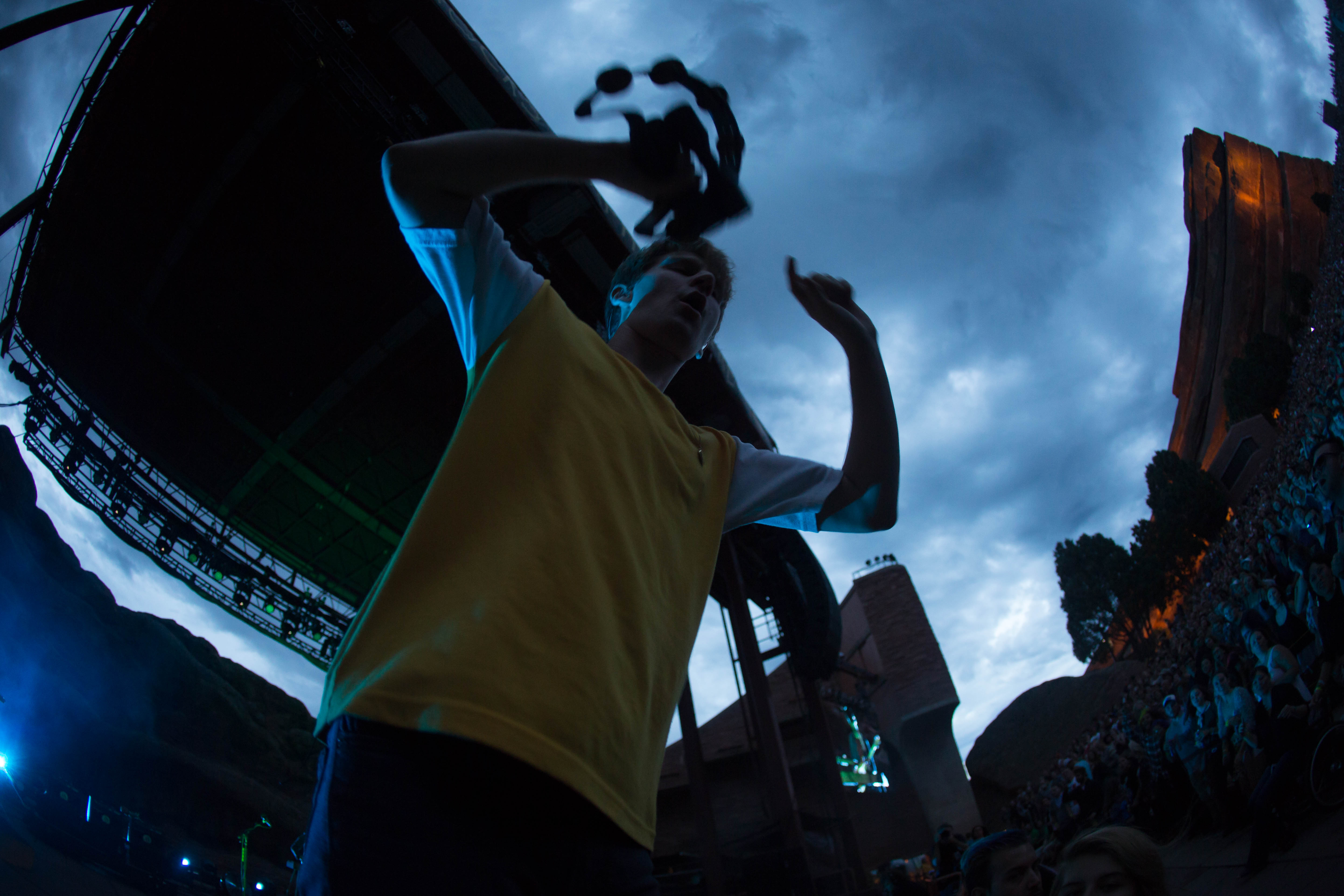 Glass Animals strutted out onto the stage to a chanting of voices, and this was perhaps the biggest audience they’ve performed to since their debut album Zaba was released in 2014. Their U.K. tribal music let the crowd get used to the dancing that was about to come, and they even played some new songs, including the jungle lovin’ song “Life Itself.” I saw them in the fall at the Ogden and their transition from a more intimate stage to the Rocks revealed their mastership as musicians.

Dave Bayley, lead singer, kept smiling brightly and stated in his accent, “Someone once told me this was the coolest place to play in the world,” garnering cheers of approval from us loyal show goers. They played classic hits from their discography, such as “Gooey,” “Hazy,” and “Black Mambo.” For “Hazy,” they switched up the style to make it more accessible for the sold-out show. Maybe they brought their English weather with them to this side of the pond, but with their twinkling water-droplet sounds and big drums, the weather was a cool relief from the heating up of music. 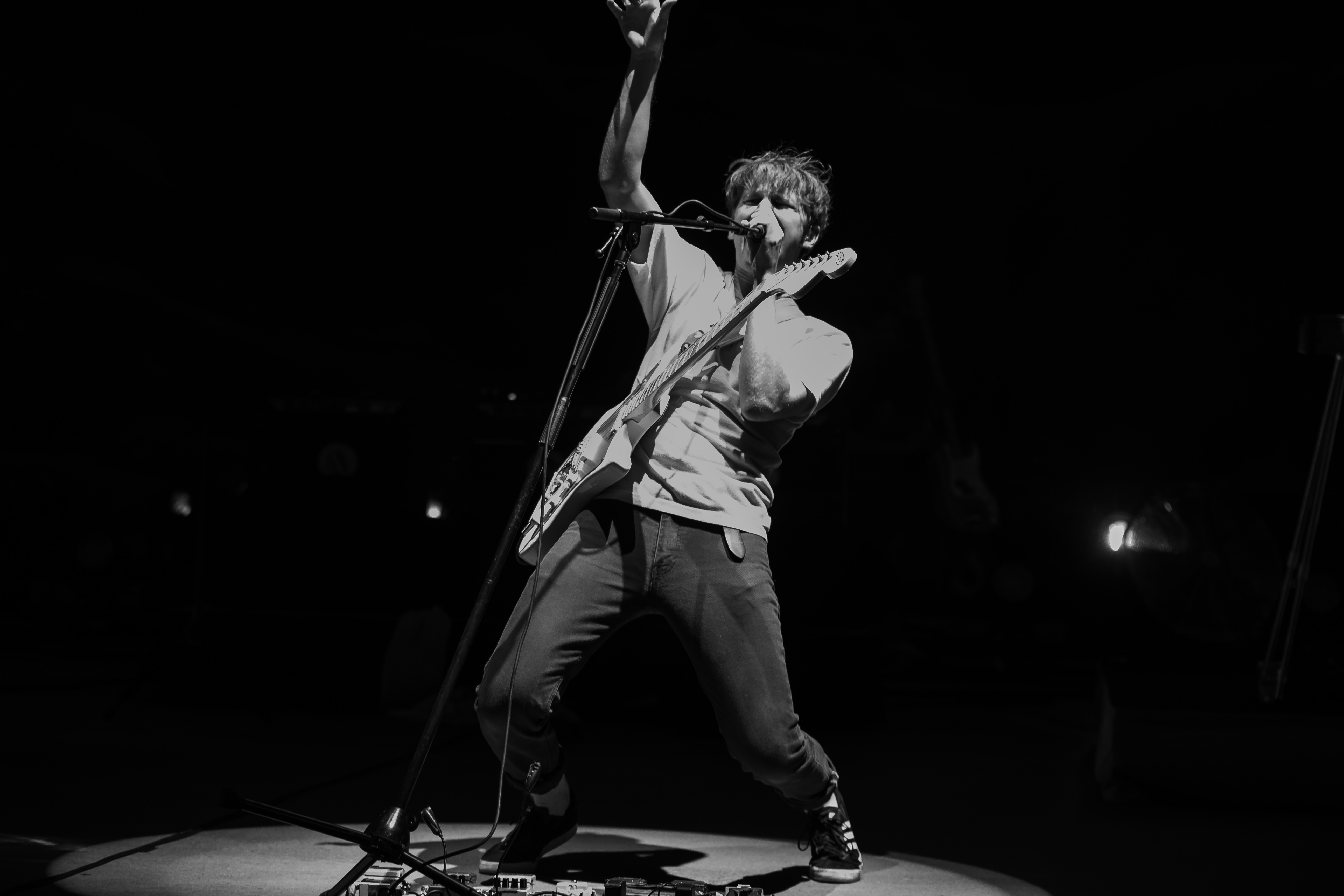 Bayley then kicked off into the crowd, performing a cover of Kayne West’s “Love Lockdown,” with their trip-hop twist, of course. Ending with “Pools,” the crowd was perfectly poffered to take on Portugal. The Man. Glass Animals offered one last comment, appealing to the swirls of fans who fall in love with accented males — “It’s totally bonkers here.”

Silence slid into Johnny Cash’s “You Wild Colorado,” an anthem for our beautiful state that is often forgot in the throes of the music world. There was a MC for Portugal — “Black Daniels” — a curious act that I didn’t quite understand, nor care. But singer John Gourley kicked us off into “Hip Hop Kids” and “Atomic Man,” songs that we all could easily jump into. From there, the night was a play between Gourley’s mystical voice and drummer Aaron Steel bangin’ on his drums — just your standard galaxy breakdown in the form of music. But I kept thinking that bassist Zachary Scott Carothers and his subtle twinkling carried the group down the rock n roll corridor. 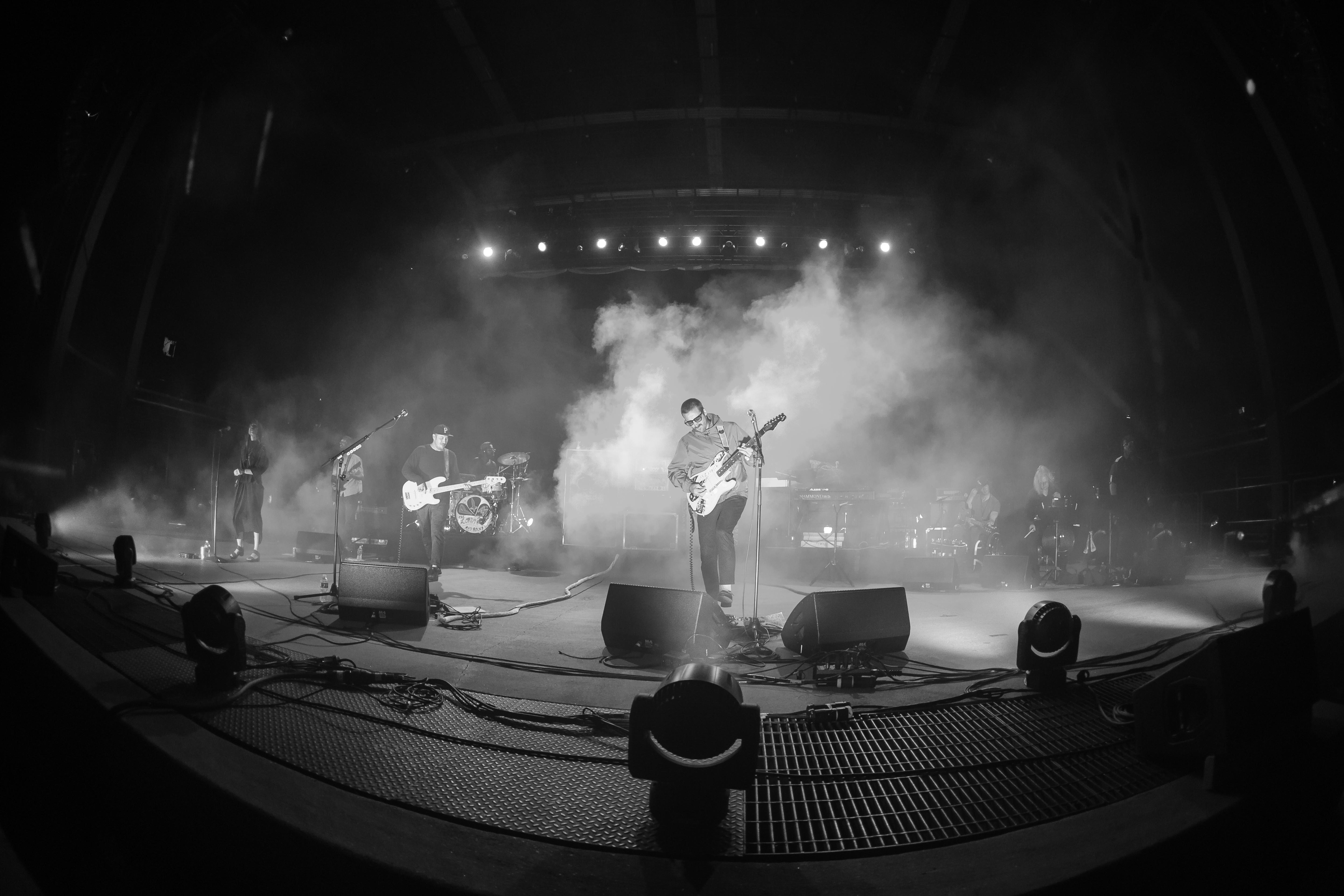 The band leaned heavily onto their indie rock muscles, dispersing their well-known psychedelic pop into the thread woven by performing at Red Rocks. The MC kept conversing with the crowd in between breaks of songs, and honestly was cracking me up — he stated, “You know they brought me on tour with them ‘cuz I tight.”  But hey, Portugal. The Man has always paved their own route, and if they wanted a hype man at their fourth show, then so it shall be.
Melting into formation for the song “And I,” sinuous guitar strings drifted into being with Gourley’s voice carrying the crowd, “They thought in those younger years, / They knew what to do / They knew what to say / Had nothing to lose.” The most beautiful part of the night, however, was the fact that Gourley’s wife performed back-up vocals for the band. 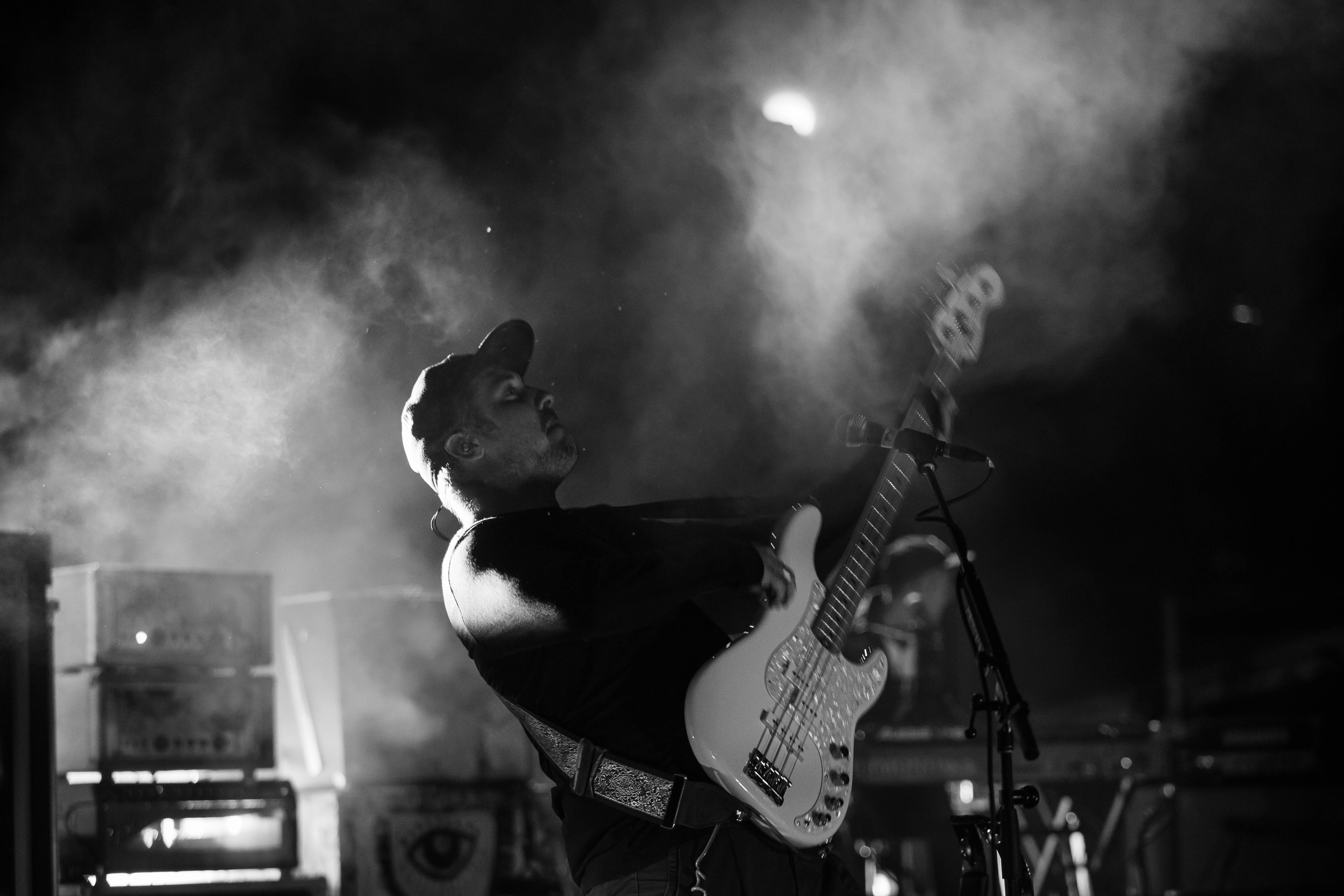 When not affecting the psychedelic world of rock music, Gourley resides as a visual artist in Portland, Orgeon. I continuously see his influence as an artist seep into the layers of his music. When “So American” hit the lights, the crowd found another song they could latch onto and feel fill up their musical soul. But the lyrics were startling rooted in an artists’ mind — “If pain was a color to paint on you / Your heart would be the color blue / Be a painting, hung up there ’til your body met your head / Which were made of silver / You are the one they call Jesus Christ / Who didn’t know no rock and roll.” Their warped harmonies jived well with heartfelt piano chords that form this popular song.

Digging around a symbiosis of rock and pop, they played a slew of well-loved songs, including “Do You,” “Everyone is Golden,” and “Modern Jesus.” We were given a tetris escapade into “Modern Jesus,” a parody (perhaps commentary) on American society. The crowd even got a taste of some new songs as well, and reminiscent big band sounds of the 60s emerged from the band — but done so in the Portugal way. With their striking guitar slashes and soft vocals, their was a dance created that lulled from ecstatic to pensive. But for the song “All Your Light,” their was no precise control — and the deepening of drums was exactly what the crowd thirsted for. 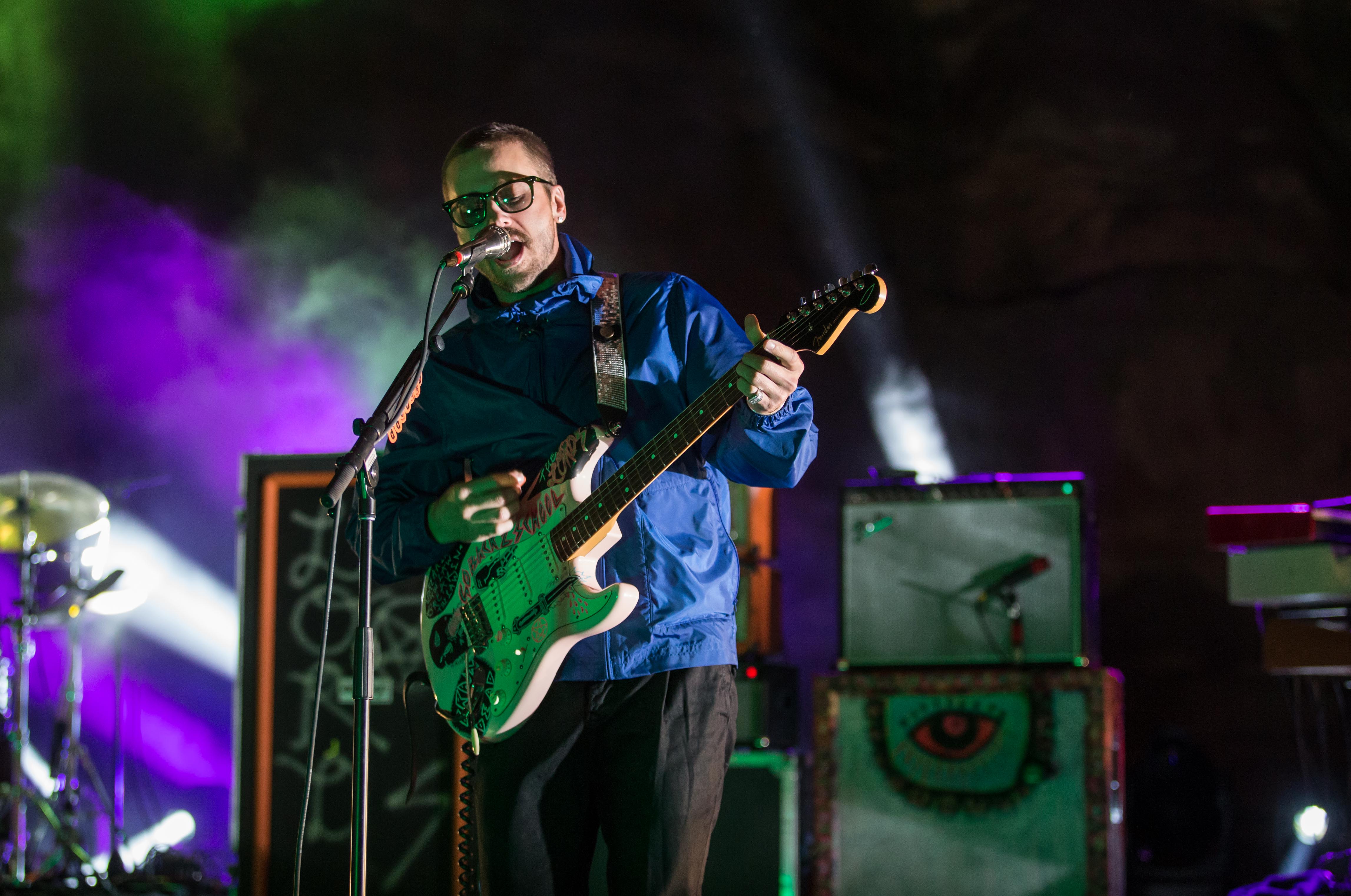 Able to show off their mastery of instruments, the band created collision of sounds while lights flickered energetically behind them and out into the crowd. “It’s seriously fucking amazing to be up here,” Gourley exclaimed into the microphone, clearly loving the vibes the crowd was pouring back. They merged the song with “The Home,” organs quickly taking over while a fog was lifting over the crowd. The end was near, and exploded with the band careening over and across the stage to the song “Purple Yellow Red and Blue.”
They couldn’t leave us, not yet, not without hearing one last loved tune. “Sleep Forever” drifted out into our ears, melancholic strings with a tinge of hopeful organs bellowing in line with Gourley’s penned lyrics, “I just want to sleep forever / Never see tomorrow / Or lead or follow / I don’t want to work forever,” and I imagined all of us fans were replacing “sleep” with “stay” at this point in time. They had composed a medley intertwined with “Hey Jude,” an orchestration that could show off both sides of the band. This may have been their fourth time hitting the Rocks, but it definitely will not be their last. 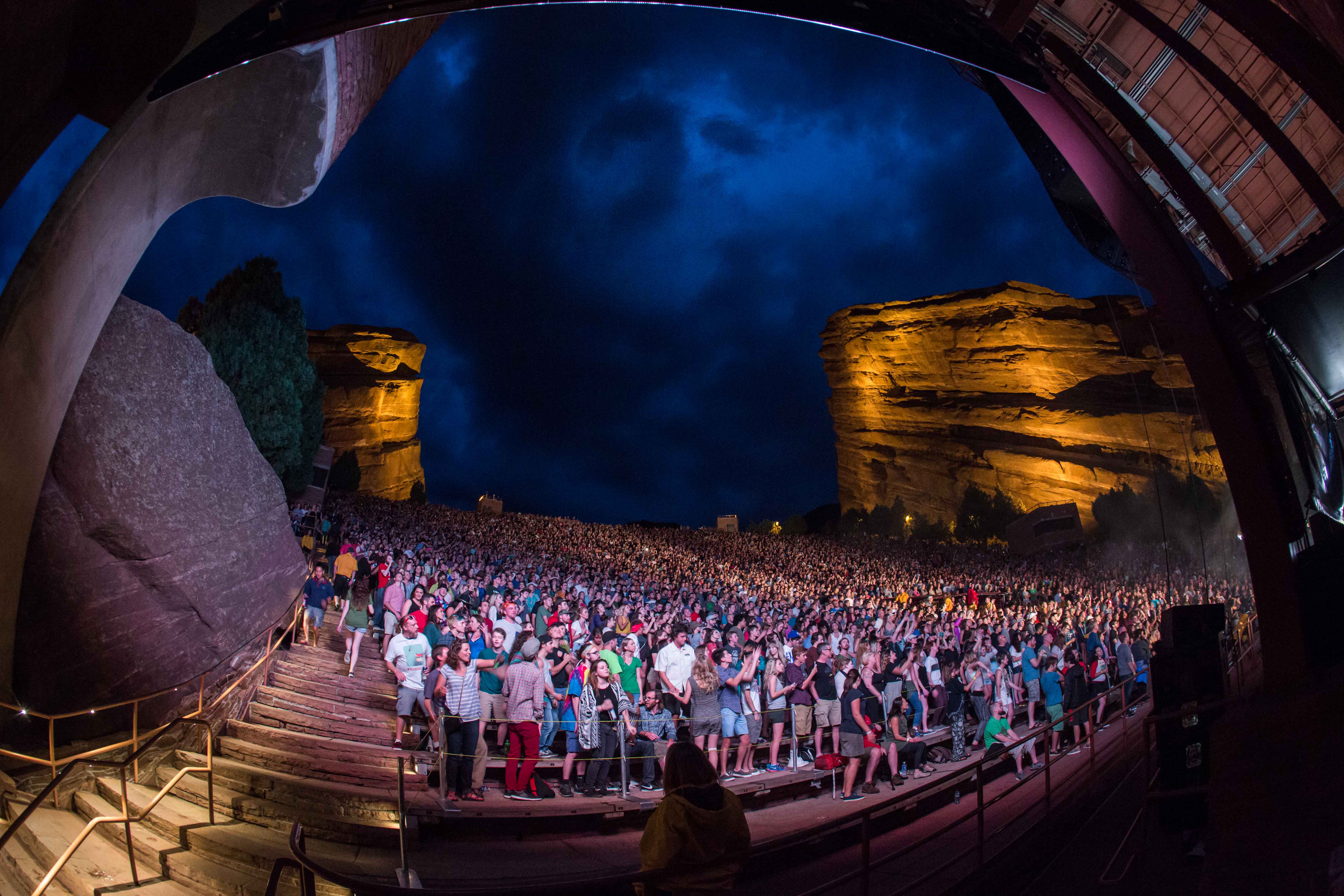