“You don’t open a dive bar, a bar becomes a dive bar,” said Sean Kenyon proprietor, at Occidental. “You open a bar that people want to dive into, where they feel like they are at home.”

On the surface, this new LoHi bar and self-envisioned future “dive” appears to be the antithesis of its critically acclaimed brother, Williams & Graham. Its entrance—scored by two retractable garage doors that allow plenty of light into its punky, counter-cultured themed interior—is unlike the hidden portal that leads you into the belly of its adjacent relative. Swaths of chatty people flow in and out of this airy space, instead of cozied up in seductive booths where a drink can be intimately shared. At Occidental, you’ll find bartenders clinking shot glasses with patrons via outstretched arms and what seems to be an increased frequency of hugs and high fives. In a lot of ways it seems to be a regular bar you’d find on the corner of any American city. It is, in this sense, vastly different from the Prohibition era fantasy that is Williams & Graham. But Kenyon, who also happens to be one of the best bartenders in America, it is exactly what he wanted. 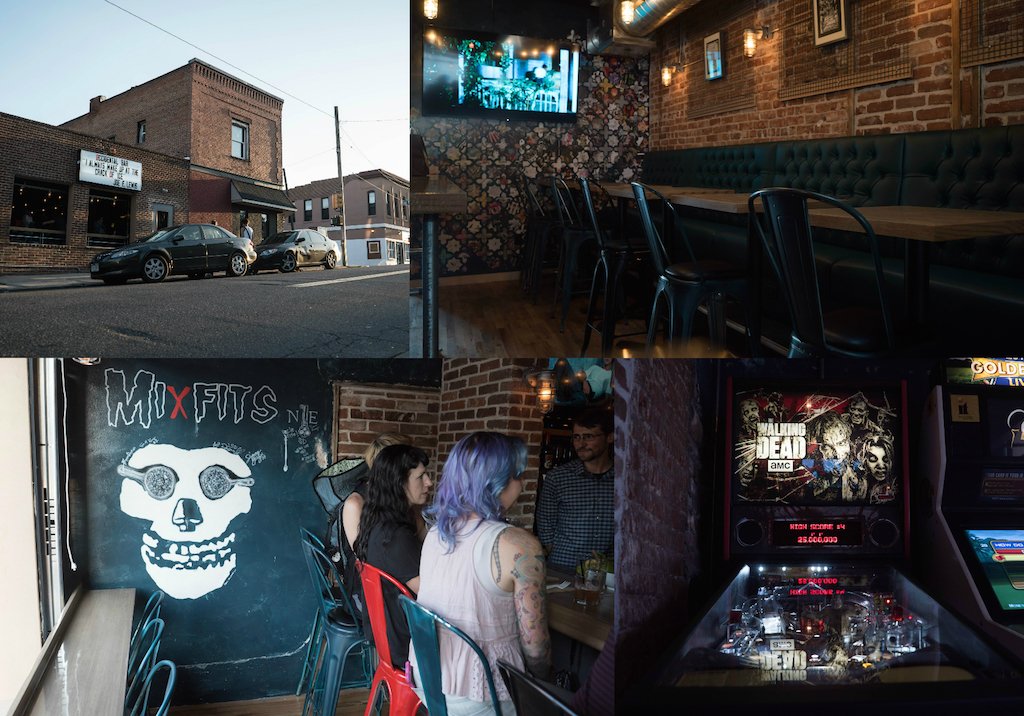 Occidental. All photos by Kyle Cooper.

“When I go home, there are three or four people sitting at [my dad’s] bar that have known me since I was five,” said Kenyon. “And that’s because he catered to his neighborhood. They were like family. I want that to happen here.”
Kenyon, who is a third generation barman from New Jersey, has a deep love and strong inner-ideology when it comes to bartending. Some would argue that these philosophies—especially ones about genuine hospitality—are a major reason why Williams & Graham has received so many accolades, including being named 2015’s Best American Cocktail Bar at the prestigious Spirited Awards. Caveat: It is the first time any bar outside of Chicago and coastal cities has taken home this title, which might be one reason Kenyon along with his partner Todd Colehour chose Occidental, a word that has been historically used in reference to a western threat to the east—cheeky.

“Everyone has a concept, or is a rum bar or whiskey bar…Not that cocktail bartending and spirit-specific bars aren’t important… but we wanted it to be an everyman’s bar”

For this newest project, Kenyon’s ideations from his working class roots seem to have pushed themselves to the forefront. That’s why Occidental, in many ways, is the stripped-down version of Williams & Graham. The space isn’t elaborately decorated, nor does it have any huge theatrical elements. The design—done largely by Kenyon’s wife, Bijou Angeli—does have plenty of style, though—including a wall made of 1,286 silver cassette tapes. However, nothing about it shouts in your face.
“Everyone has a concept, or is a rum bar or whiskey bar…Not that cocktail bartending and spirit-specific bars aren’t important… but we wanted it to be an everyman’s bar,” explained Kenyon. Aside from its proletariat attitude, Occidental isn’t average. Much of what has made Williams & Graham so famous still conceptually persists at this fledgling concept.

“We can teach anyone with a personality how to bartend, but I can’t teach everyone who bartends how to have a personality” 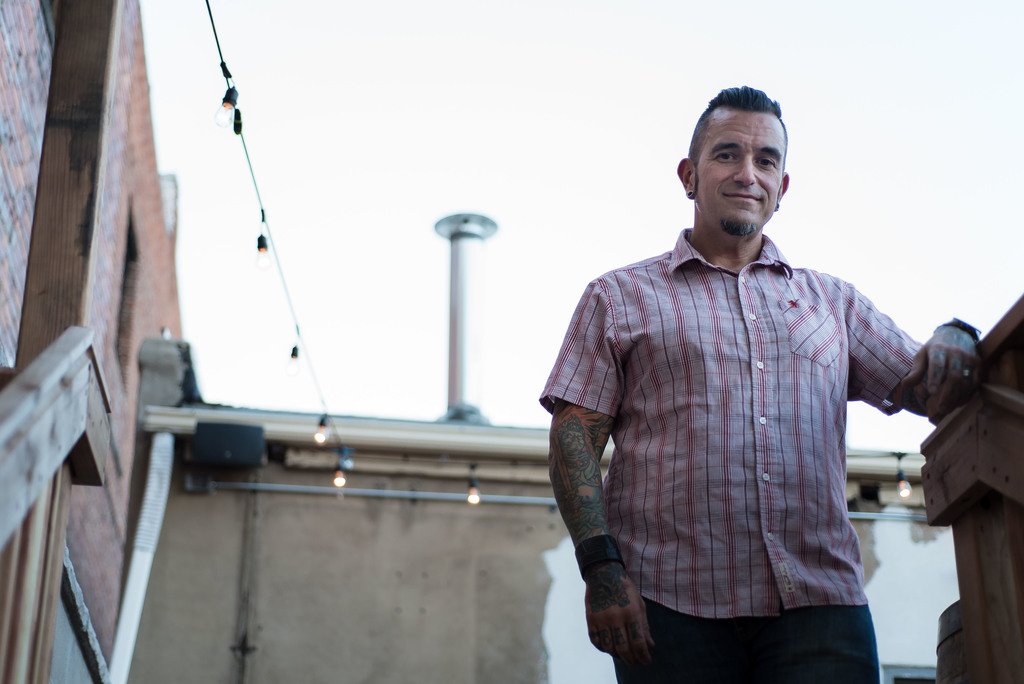 “We can teach anyone with a personality how to bartend, but I can’t teach everyone who bartends how to have a personality,” explained Kenyon in reference to how he chose his staff.
The team at Occidental has been hand-picked to be a lively and personable bunch. Barmen and women come from all over town, ranging from establishments such as the youthful and spunky Syntax Physic Opera to the new American, Lower48 Kitchen. “[They’re] not no-name bartenders, but not ones you’re reading about,” he said.

Kenyon elaborated that the team at Occidental are the ones he’s looking to train to move on to Williams & Graham or, hopefully, go on to open their own places. Kenyon is legendary for how he educates his staff (everyone must read Danny Meyer’s “Setting the Table”) and has notable employees that have won major accolades of their own (see: Allison Widdecombe). It won’t be surprising if Occidental becomes a breeding ground for talent like it has at its big brother. According to Kenyon, he’s particularly excited about a couple of staffers. “It’s like you’re building a baseball team, you need the salty veterans and the really strong youthful players… Here, Brandon [Lee Brough] is the salty veteran, and then we have Hailey Landers and Michelle Lynne Glancey… we really see them as the next wave of great bartenders.” 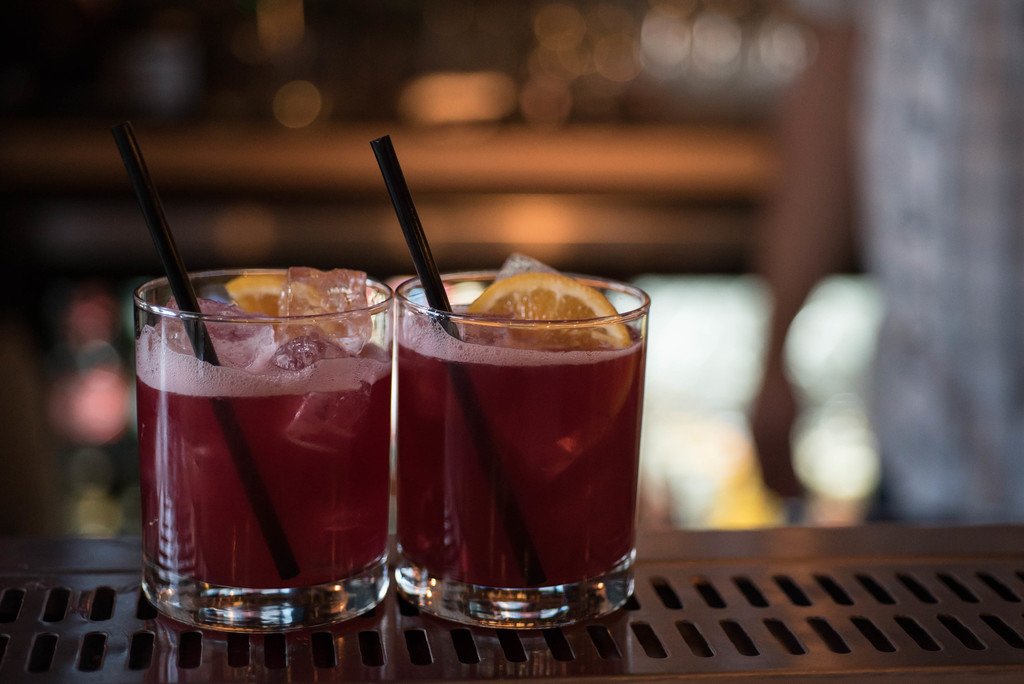 The cocktails at Occidental are, like much of the establishment, to some degree a pared down version of its sibling bar’s famous iterations. All cocktails use made-in-house syrups and fresh ingredients, but instead of an entire book of drinks, there is a handful of selections (on the upside, all cocktails are $9). Half of the list consists of classics like a daiquiri, old fashioned and even a Long Island iced tea, as well as some original drinks that consist of 3-5 ingredients on average. For bourbon lovers, the Sonic Reducer—made with cranberry liqueur, lemon and honey—is a deliciously tart way to take your whiskey. For a bartender’s choice, Brough said he prefers the Sailin’ On, a equatorial inspired rum cocktail consisting of bitters, lemon and pineapple syrup. In addition, there are 10 beers on tap ($3-$6) and roughly 20 additional domestics ($3-$15). The local beer list features brews like an Avery IPA, Steamworks Colorado Kolsch, several beers from Great Divide and a Crooked Stave Surette, but you can also find traditional selections such as Guinness, Budweiser and Miller High Life.
Don’t expect to see Kenyon drinking any beer though, since he’s actually allergic. He found out when he was 12. “I thought I was going to die,” he said. Rather, you’ll find him taking his tequila neat or ordering a cocktail of rye, Applejack and amaro called The Gooch. 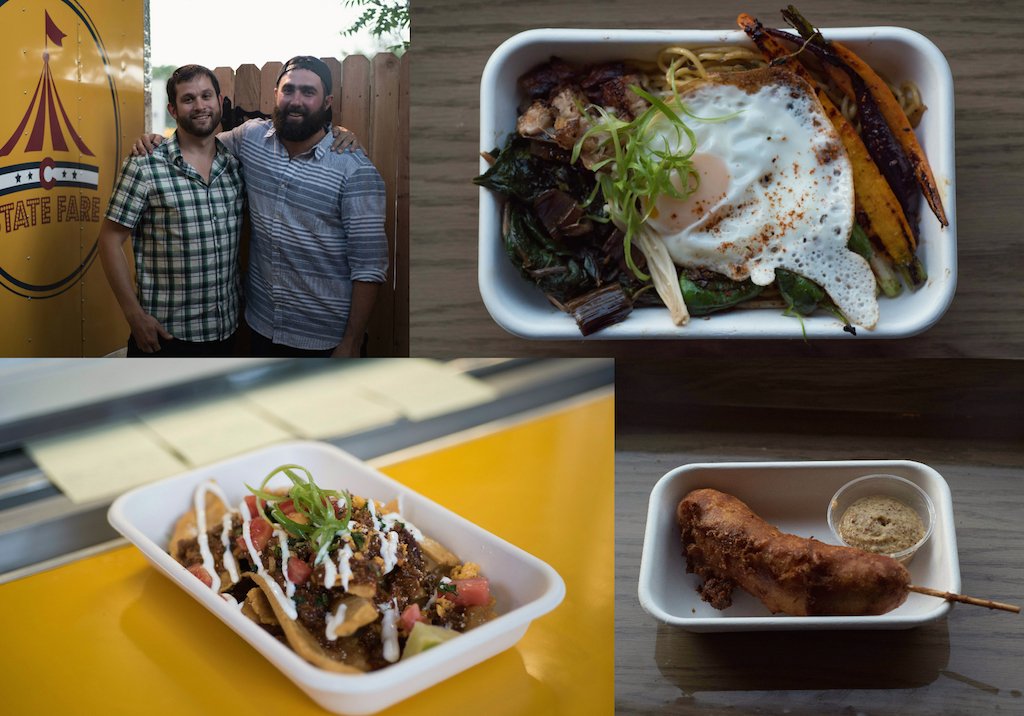 In order to keep the theme of family and community alive, there could be only one option when it came to food at Occidental. State Fare food truck is operated by a team of former employees of Williams & Graham including Chad Michael George and Kade Gianinetti (their third partner, Jared Schwartz, cut his teeth with international restaurateur, Richard Sandoval instead). The truck is a permanent fixture at Occidental and can be found at the bottom of the stairs out back, but it’s recommended you order at the bar.
The food, as its name suggests, is a take on eats you’d find at a state fair. However, unlike the greasy cuisine you might find at the fairgrounds, the menu is crafted using quality, local ingredients. The corn dogs ($8) are made using the mortadella hotdog from Cart-Driver which gets dipped in a corn-shisito batter, then fried and served with a spicy togarashi honey mustard. A classic Frito pie ($10) gets a local upgrade with Western Daughters beef chili ladled onto its house made Fritos.
Other favorites include the toasted chile relleno pierogies ($9), which have a bit of a kick to them as they are filled with hatch green chilies and the street corn ($4) topped with butter, mayo, Cotija, cilantro with a wedge of lime. Cotton candy ($4) also rotates its daily flavors with options like a lemonade Campari. Additionally the proprietors of State Fare also own American Grind, a burger focused food truck, and the forthcoming restaurant, The Way Back.
—
The Occidental and Williams & Graham might seem utterly different from the exterior, but at their core, they carry the same soul. During both of my visits, I experienced a level of care that I really haven’t had anywhere else. The staff was highly personable, and truly made it feel like they genuinely took interest in your experience. While it is still brand new—and sometimes new shine will tarnish—seeing what Kenyon has done in the short time since he opened Williams & Graham in 2011 makes Occidental an exceptionally promising place.