What: An accessible, wine-focused restaurant that offers shareable plates in a design-forward, mid-century modern cafe atmosphere.

Denver is a beer town. I don’t have to go on and on about how there are more than 200 active breweries in the state or how Coloradans consume 13.6 gallons of beer per capita every year, to prove that. All you have to do is sit down at almost any restaurant and ask for the beer list. Because nine times out of 10 it’ll be dominated by a plethora of local brews, some of which you might not have even heard of. So what happens when someone tries to open a “wine cafe” in a city famously known to love the suds? Postino, a wine-centric restaurant hailing from Arizona, is about to find out. 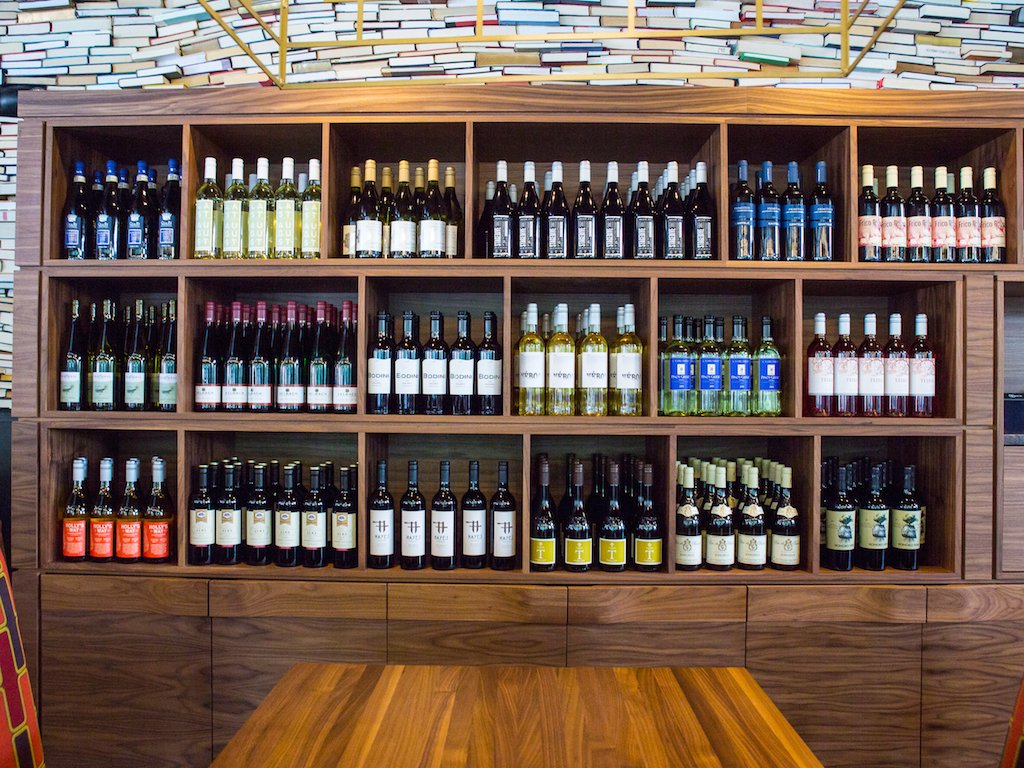 Postino originally began in 2001, when its first location opened in a renovated Arizona post office. The name—along with the concept—was birthed from the revival of this space since Postino means “postman” in Italian. The idea, which proved to be a fruitful endeavor, has now been replicated in three other historical buildings throughout the Grand Canyon State. The expansion to Colorado, however, is a new venture for the company, and was a result of their friendship with local breakfast eatery-turned regional chain, Snooze:

“Our friends from Snooze were [opening in] Phoenix and, so we thought, ‘Well, we need to come to Denver.’ It was love at first sight,” said Postino co-owner, Lauren Bailey. Postino, however, outside of this serendipitous occurrence, does seem to have echoing attributes that will likely make it a natural fit for the Denver dining scene. Just within the LoHi neighborhood, there are projects that play paramour to the idea of repurposing of historical buildings. From Root Down, to Linger and recently opened Avanti Food & Beverage, LoHi is becoming filled with restaurants that believe in keeping the past alive. Postino, like its predecessors, does the space justice.

“Inside you’ll find vibrant, geometric patterns and textures that interact with one another like a beautiful kaleidoscopic scene.” 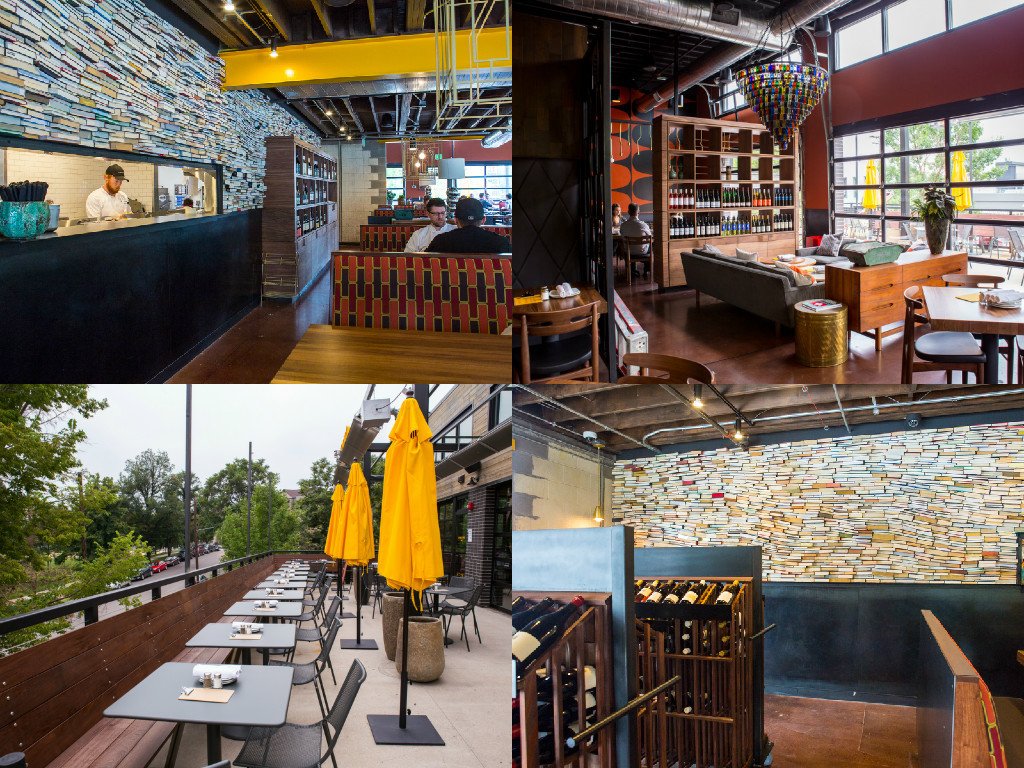 Located in the former Denver Bookbinding Company, Postino breathes new life into the 17th Street space. Once a small, red brick building, it has transformed into a modern, concrete roost that perches among a tree-lined street in LoHi. “We wanted to keep the red brick,” admitted Bailey explaining that the building couldn’t structurally support the facade. Despite this change, Postino pays homage to the space’s past in multiple ways. Upon entry, you’ll find a wall outfitted with books donated to the restaurant by its Arizona patrons. “It was wild how many we got,” said Bailey. “People brought in thousands of books… Everything from new books, old books, [and] tons of old encyclopedias.” What’s more astounding is that Bailey, a woman of many talents, explained she personally constructed the wall in only three days. “It was like the worst game of Tetris,” she jokingly said. Aside from this literal representation of the building’s history, Postino’s Denver location is very much a throwback to the mid-century modern design of the edifice. Inside, you’ll find vibrant, geometric patterns and textures that interact with one another like a beautiful kaleidoscopic scene. The star attraction, though, is a custom made chandelier—built from different colored glass tiles—that looms above a fully-furnished lounge located smack-dab in the middle of the dining space. To some, the lounge might seem out of place; For Postino, casual congregation is very much supported. “We encourage an Italian lifestyle here,” Bailey said. ”We don’t expect you to order food or an entree. You could come sit here with your girlfriends and just have wine and we would never blink an eye.” That’s not to say you shouldn’t take some time to also eat at Postino.

Pro tip: While waiting for your table, you can peruse the wine racks up front and pick out a bottle to enjoy during your meal. 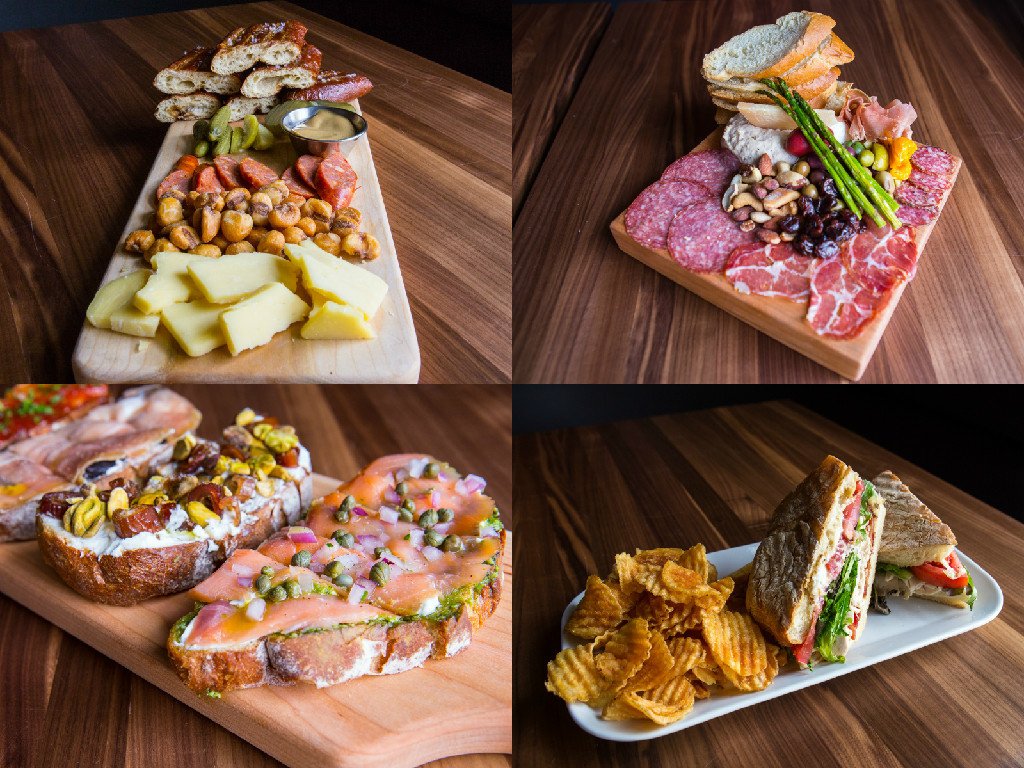 (From top left, clockwise: The pub board, the butcher’s block, the bruschetta (smoked salmon & pesto and ricotta & dates pictured) and The Nine Iron club

Upon first read, the menu appears straightforward. There is a variety of starters, including several different boards of meats, cheeses, and a wide selection of bruschetta that is mix-and-matched with 12 different options ($14 for 4). The bulk of the menu is left to soups, salads and paninis, along with a few desserts. There are no traditional dinner entrees offered, though, so it’s highly recommended you order a range of dishes and share with fellow diners.
Don’t let the seemingly simple menu let you mistake it for boring, though. Rather, as you see pictured, items such as the butcher’s block ($14) and the bruschetta are topped with a mosaic of delectable looking ingredients. Fortunately, it’s just as tasty as it appears. The menu is made with high quality and local ingredients, such as bread from Denver’s City Bakery. Just sitting with Bailey, she went through almost every item, and had a detailed story about the purveyor it came from. “I hand-picked each one of these olives for a specific reason. This one is a Castelvetrano olive,” she said, while pointing to a plump green morsel,”In my opinion, this is the king of olives.” Best sellers are, “hands-down, the bruschetta,” said Bailey. Crowd favorites include the prosciutto, brie and apple and–of course–the traditional. “We sell a lot of those,” she explained.

“60 percent of wines at Postino are exclusive to the restaurant” 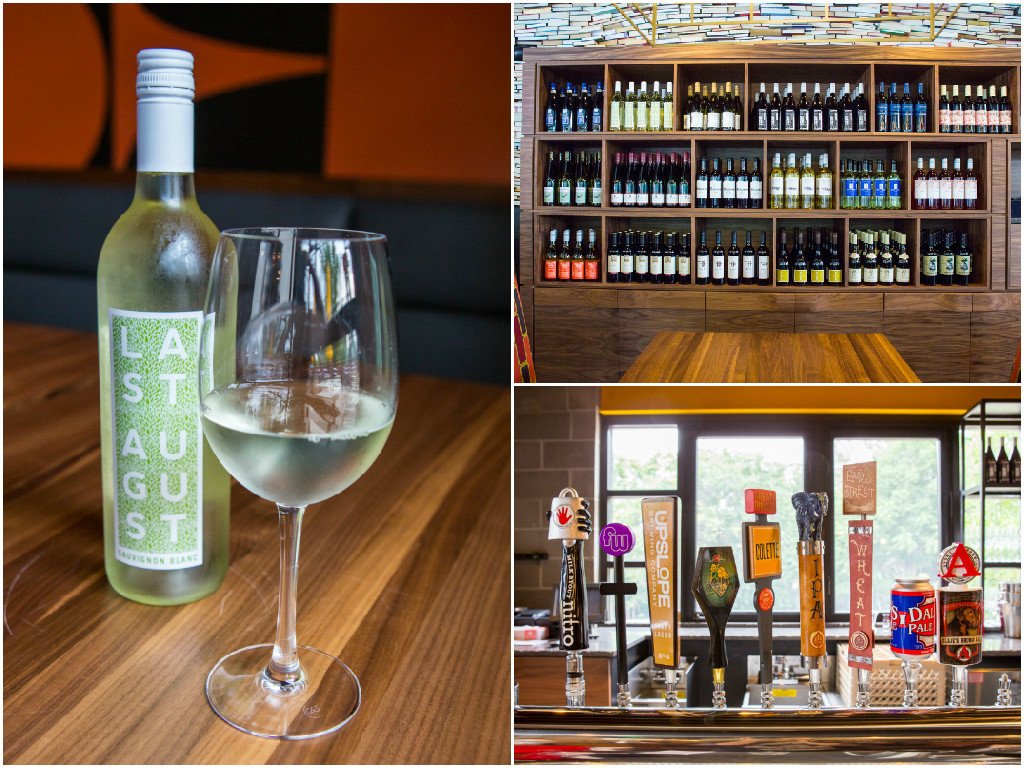 If the attention to detail seems daunting when it comes to the food and decor, it’s nothing compared to the level of coordination that comes with the beverage program. That’s because 60 percent of wines at Postino are exclusive to the restaurant. Beverage director, Brent Karlicek explained that he works closely with wineries such as California’s Banshee and Teira to produce unique selections made only for Postino. ““We just blended a third vintage of a Pinot Noir with Banshee,” he said. “I go there every summer… working back and forth [with them] to achieve what we consider the perfect by-the-glass Pinot Noir.”
Despite a wine-focused menu, the beer program hasn’t been overlooked. “We aren’t trying to fight [the beer culture], that’s why we have a robust beer program,” explained Bailey. On tap, you’ll find essential Colorado breweries like Great Divide and Avery, but there are also brews from small craft breweries like Funkwerks and Prost. “[Colorado beer] has been an essential part of our program in Arizona… coming to Colorado has been extremely exciting since we have more access to these producers,” said Karlicek. In addition, there will be rotating taps dedicated to just sours and nitros. “As we become more incorporated into the neighborhood, we will highlight more of those up-and-coming breweries,” he said.
There is one catch, Postino doesn’t offer any cocktails. So unless hard liquor is your thing, there’s plenty to quench your thirst.

–
The laid back nature of Postino coupled with its beautiful design and attention to detail, not only through its space but in its menu, signals that it’ll be a perfect fit for craft-conscious Coloradans. Plus, with a drink menu that changes three times a year, and deals like $5 beer pitchers, it’s likely that it’ll will entice even those self-proclaimed “beer geeks” that might initially scoff at the thought of a “wine cafe.”