The steady relocation of traditional street foods from trucks and carts to stylized brick-and-mortar eateries has made, for many, the experience of dining out both more familiar and more affordable. Perhaps over the years, we have just become less inclined to wonder how our in-the-know neighbors can make such a big deal out of seemingly uncomplicated foods, anxious to simply find out for ourselves whether the latest hyped restaurant is worth all the fuss. Sure enough, in the right hands, these democratic experiments can be more than great new places to eat; they can be godsends. 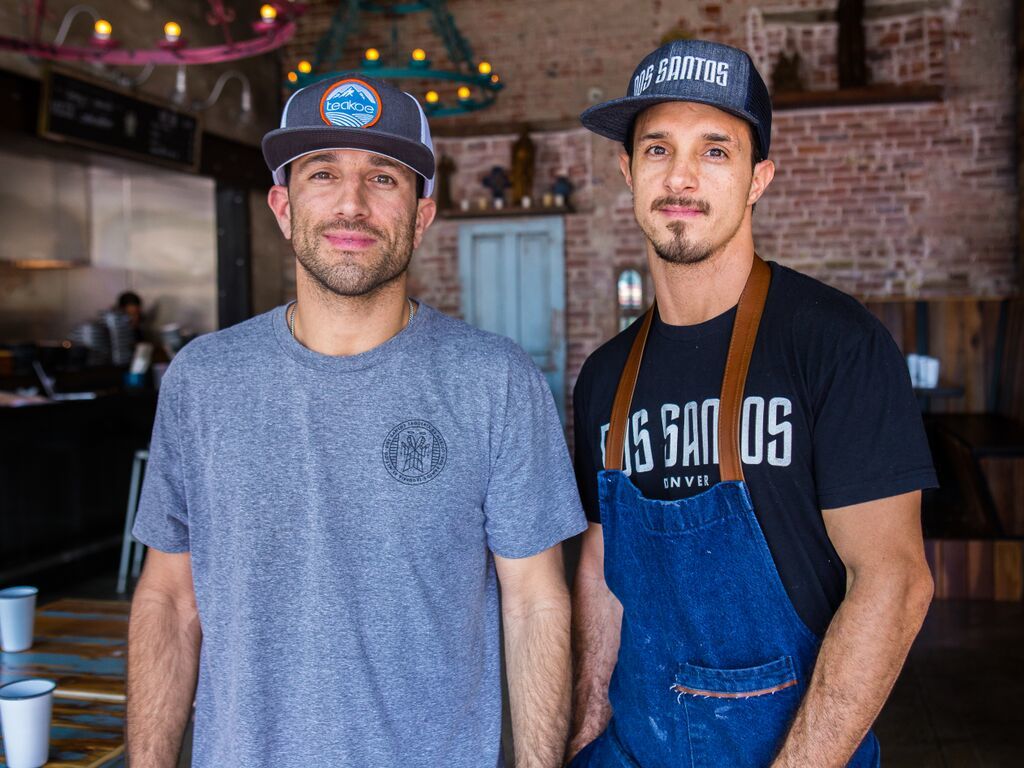 Jason and Kris Wallenta. All photography by Camille Breslin

When I first spoke with brothers Jason and Kris Wallenta about the plans for their new restaurant, Dos Santos, they made it clear they were interested in “creating something more than just a meal.” Longtime veterans of the industry, they agreed on a blend of the aesthetic grittiness they both knew well from childhood in the tri-state area, and a non-exclusive approach to the distinct cuisines of Mexico (particularly that of the Yucatan peninsula: Kris honed his craft in the kitchens of Kinta and Kondesa, the two restaurants he owns and operates in Cozumel). For the time being, Kris is leading the back of the house while Jason controls the front, though Kris will periodically take leave to check on his other properties in Mexico.

Working together as family, the Wallenta brothers’ shared tastes were key to realizing the décor and the menu. They chose the name Dos Santos as a way of recognizing their cultural heritage, also hoping the religious motifs would conjure associations of celebrating holidays with feasts and grand parties. 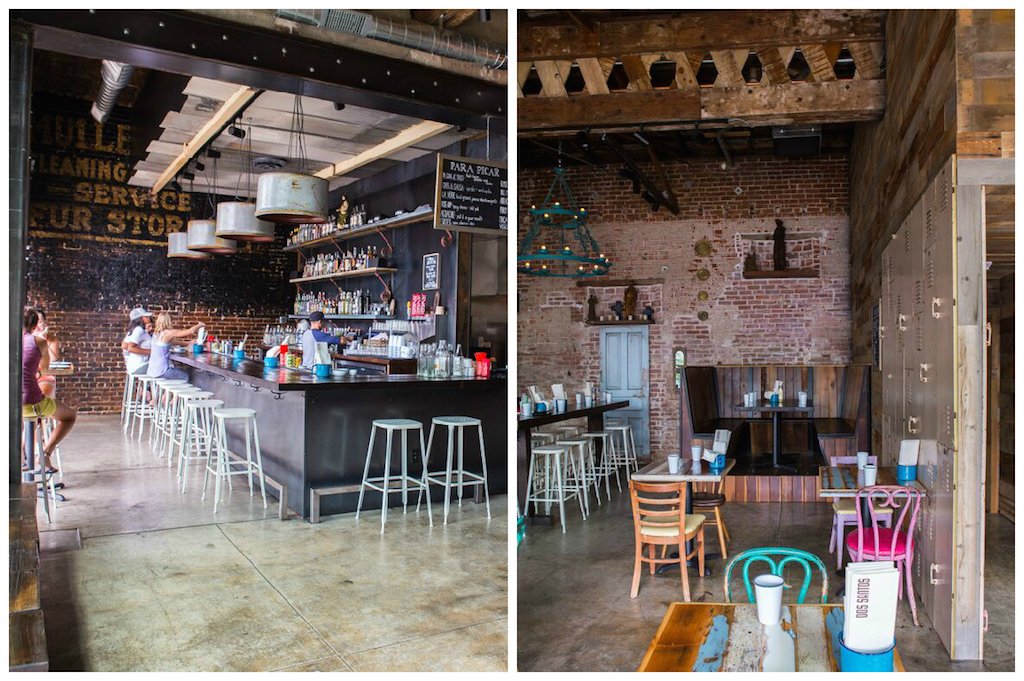 Having had the opportunity to witness its transformation from empty shell to the “warm, cozy…ragtag, thrown together feel” the brothers envisioned in the midst of construction, I can say that, as with the menu(s), their stylistic delivery is on point. Expansive windows lend the worn wood tabletops and bare concrete a unique, just off the street feel to the restaurant while a wall of worn school locker doors, salvaged planks and retooled scrap lighting fixtures cohere with the exposed brick. Other than the kitchen and bar equipment, there is next to no visible chrome; with the lights dimmed at night one feels sucked far away from city environs, transported to some generations-old nook. The situation of saint statuary on the back wall, overlooking the seating areas and diners, represents a fitting final touch for the space. 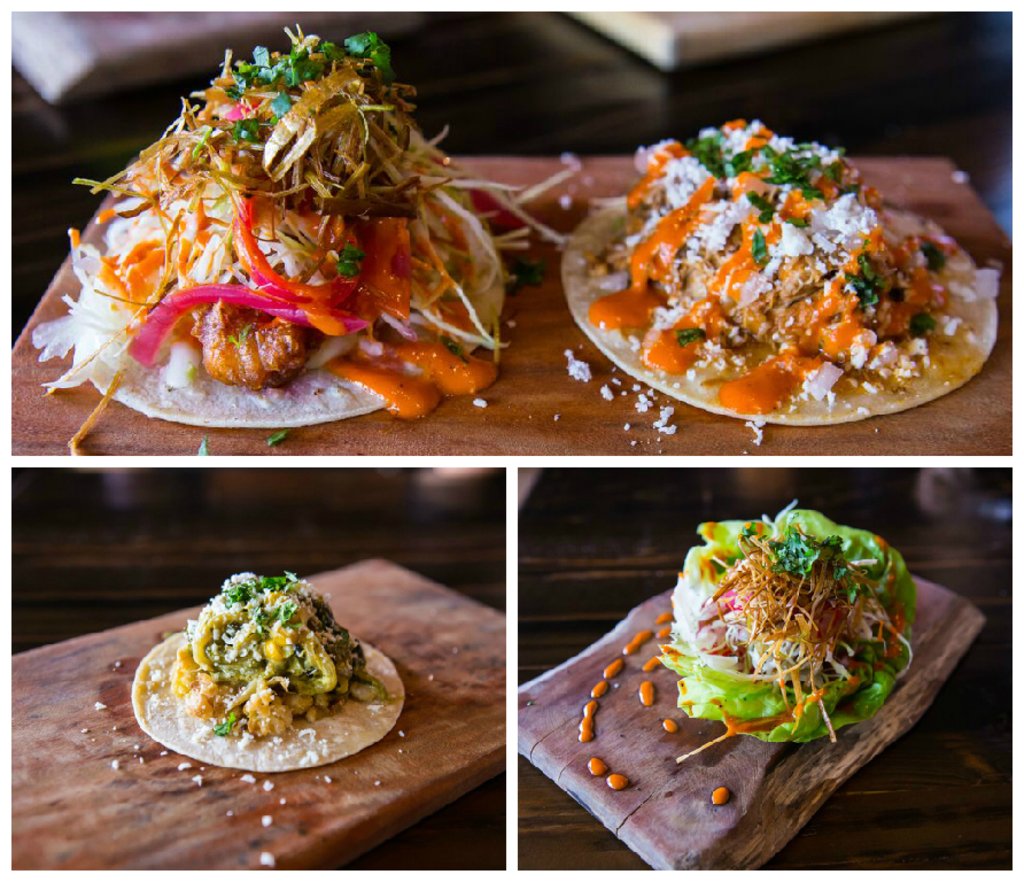 At the outset, Kris Wallenta was wary of keeping the menu accessible, and was specifically mindful of not “overthinking [the] tacos.” This is street food after all. To behold the presentation, though, you may be fooled: each recipe is a spectacular display of ornamented, yet simple ingredients that pop out entreatingly from the wooden slabs on which they are served.

Six tacos comprise the core of Dos Santos’ lunch and dinner menu — five protein options, one vegetarian. The three listed seafood options are arguably the strongest. The bold standout, the O.M.F.G ($4.75), is the only taco that doesn’t come on a corn tortilla, but rests rather on a slope of bibb lettuce. This cooling vessel is the perfect complement to the fresh tuna and lime cilantro aioli that define the O.M.F.G, perhaps even better paired with the beer battered shrimp or fish of the Del Mar ($3.50) options, at least according to Kris Wallenta. The artfully subtle heat of the chicken Tinga ($3.50) and straightforward flavors of the Arrachera ($3.75) also warrant mention.

Initially looking to blend regional Mexican cooking styles within a trim menu of 15 items, the Wallentas have followed through with this plan and will also strive to “hit [their customers] with some really special stuff,” that you won’t find printed, but must ask for specially, said Jason Wallenta.

Jason and Kris Wallenta have graced the bustling uptown restaurant market with a great new concept. The well-tailored space has all the marks of a tried-and-true secret spot and commands attention with affordable yet stylish street foods that will satisfy a range of restaurant-goers.

This article was updated on October 4, 2017, for current menu items and times.